Games about families are pretty uncommon. Ignoring the state of games about dads (because they’re about dads, not families, which is sort of accidentally on point), can you even name the parents of more than a couple of game characters? There are probably more about orphans than about someone who, even in passing, has parents.

Children Of Morta is all about the family. It’s a slashy light Diablo-ish game without the loot. Instead of classes you choose a member of the family to delve into the ISO standard monster cave underneath the family mansion. Each has their own weapons and talents, and there are endless cut scenes about how they all come together to stop the evil purple goop coming down the mountain to englubben everything.

Now read that last sentence aloud slowly enough that it takes several minutes, and as though it’s the most profound thing ever said. That’s how Morta presents itself. 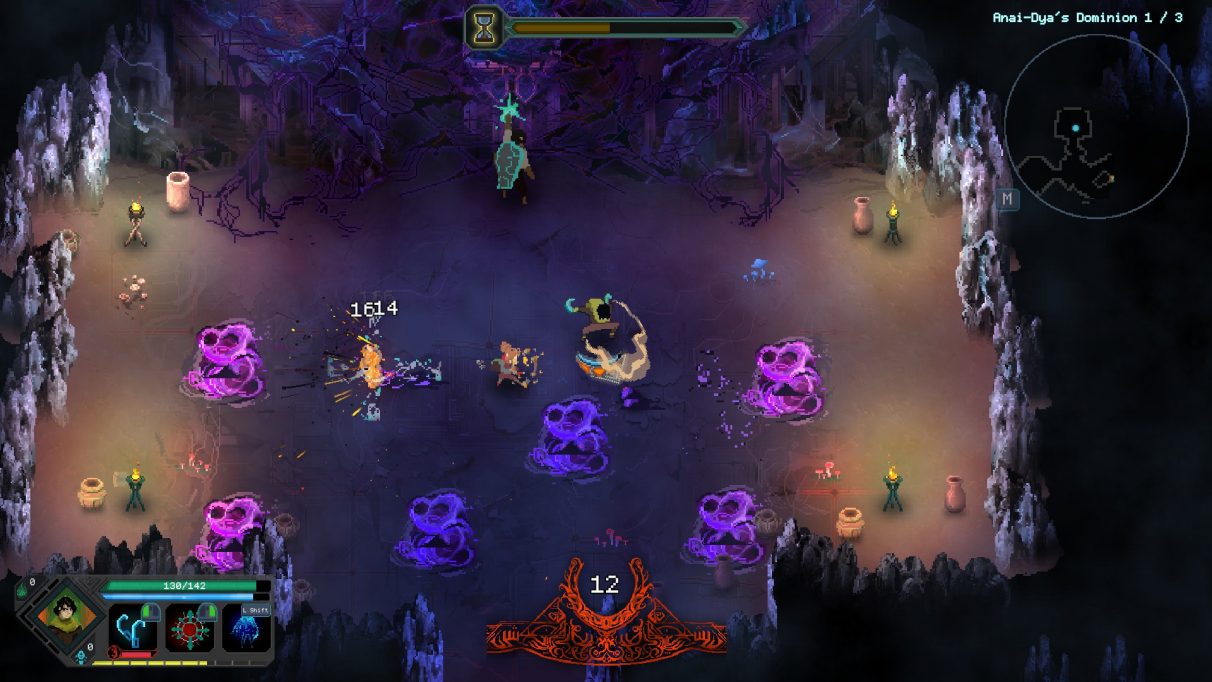 I was not charmed by its story. The concept is terrific but I just had no reason to care. It’s a generic story, ponderously told, and the promise of shaking it up with the family angle is undermined by its not particularly interesting characters. However much the narrator rumbles and the script tries to talk about things weighing heavily on shoulders and love and bravery and this and that, if I simply said “The Corruption is spreading”, you’d already know everything about it. Compounding this is the way its cut scenes (which to their credit are short but still skippable) play immediately after a failed run, ie at the exact moment you don’t want to see a cut scene.

I want to like this one. It puts a creative spin on the dungeon diving Diablike, and does away with the incessant clicking and faffing about that often puts me off those. It’s also gorgeous. I feel like I’ve been saying this a lot lately, but Children Of Morta’s artwork is clearly excellent, even more so in motion. The fighting, too, gets a lot right. Each character controls the same way – hold the left mouse button for a basic attack, right click for a special move, and simple, natural shortcuts for unlocked special moves or consumable weapons and temporary powers. They’re all brawly and there’s nothing really out there in terms of playstyle, but each has their own way of doing things. Once you’ve got to the point where you can put monsters down in a few blows, the way skeletons burst apart and hefty ogres flop to the ground is as satisfying as it is well-animated. It’s just a shame it takes so long to get there. 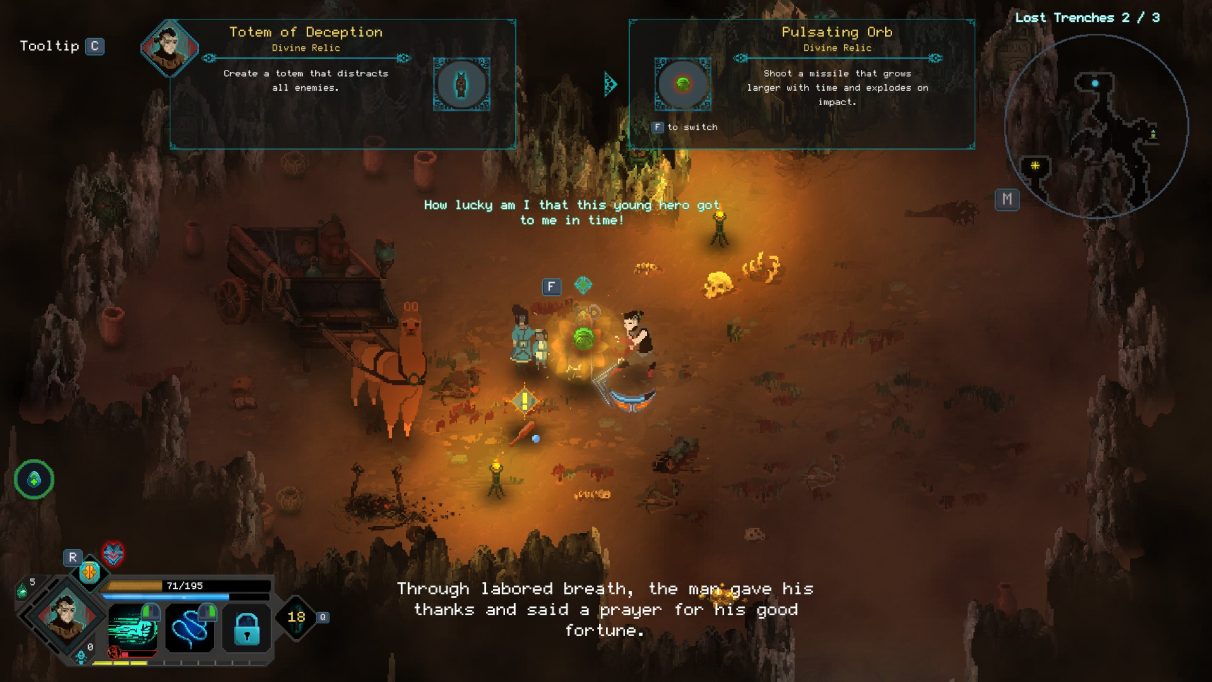 I struggled to endure Morta for hours. The opening two characters felt weak, and were woefully out of their depth when it came to fighting the bosses. Dadman is a boring, hopelessly slow liability with a tower shield, and eldest daughter Linda uses a bow that’s little use against bosses, who love to charge and barge and teleport-leap onto you far faster and more often than either of them can dodge. The drastic increase in difficulty and shifts in playstyle needed to fight them after several levels of mostly disposable guard dogs was annoying and frustrating.

Then I unlocked Kevin. 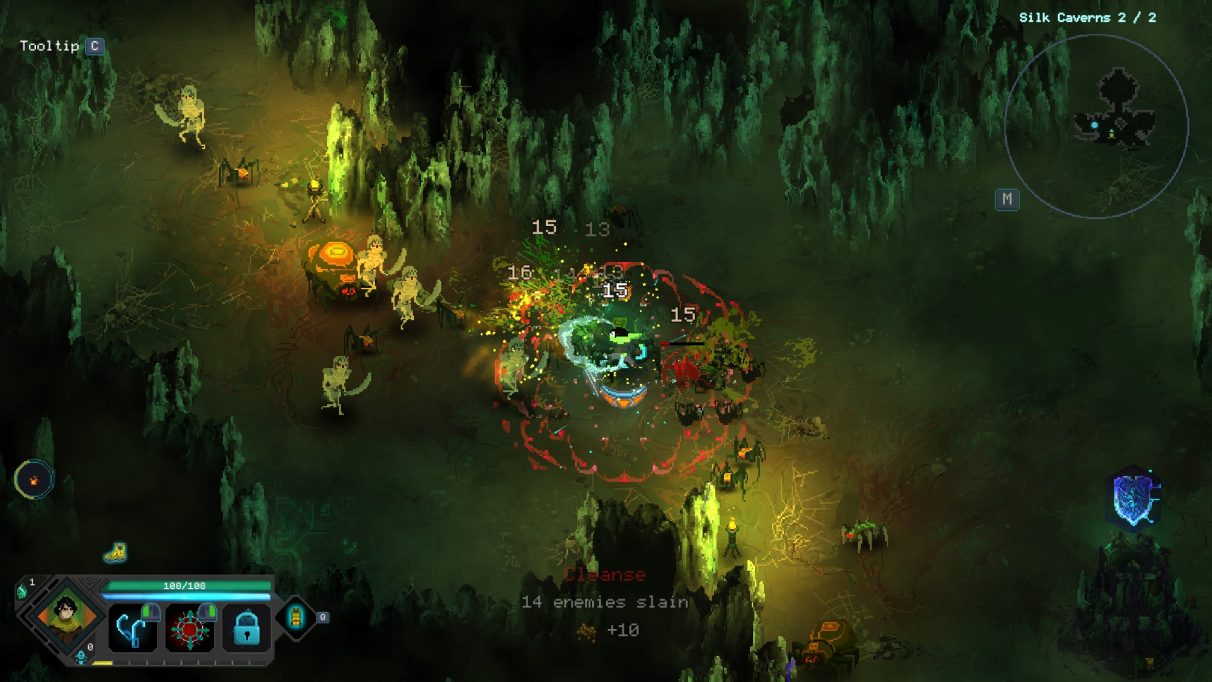 I’ve no idea how new characters are unlocked. Whether it’s levelling up, doing side missions, or simply the number of times you fail a run. But Kevin changed everything. Kevin is condensed death. His irritating Naruto run biased me against him, but then he started fighting like a cracked up ten year old Belkar Bitterleaf. He’s fast, he hits pretty hard, and his already fast daggers swing faster with every hit. Oh, and he gets a triple dodge and a cloaking power that, after a few levels, lets him one-shot ogres. After hours of banging my head against a frustrating boss fight, Kevin absolutely brutalised the entire cave and its boss under ten minutes. He racked up over double the kill chain his elders ever had, and I hadn’t even levelled him up yet.

Eventually his even younger sister, Lucy, showed up. She launches unlimited fireballs at a rate best described as “chaingun”, and if she doesn’t get hit for 8 seconds, gets a shield (several with upgrades) that totally negates the next hit. On her first appearance she was backing Kevin up – one of the other characters will very occasionally show up for a few minutes to help out – and I had to pause it because the sheer devastation they unleashed together was comical. It was like Hero if Flying Snow had a rifle, or that bit in 30 Days Of Night where after a month of cowering, one guy suddenly jumps in a turbo combine harvester with a shotgun and mercs everything in his path.

Also, she giggles. She hops merrily through the caves and giggles to herself in between massacring hundreds of monsters. This child must be stopped, I thought, before she realises her true power and destroys us all. Quite why the family would ever leave the house again when their kids have so utterly humiliated them is beyond me. Oh, and then their older brother shows up and outdoes his elders by going in with nothing but karate. 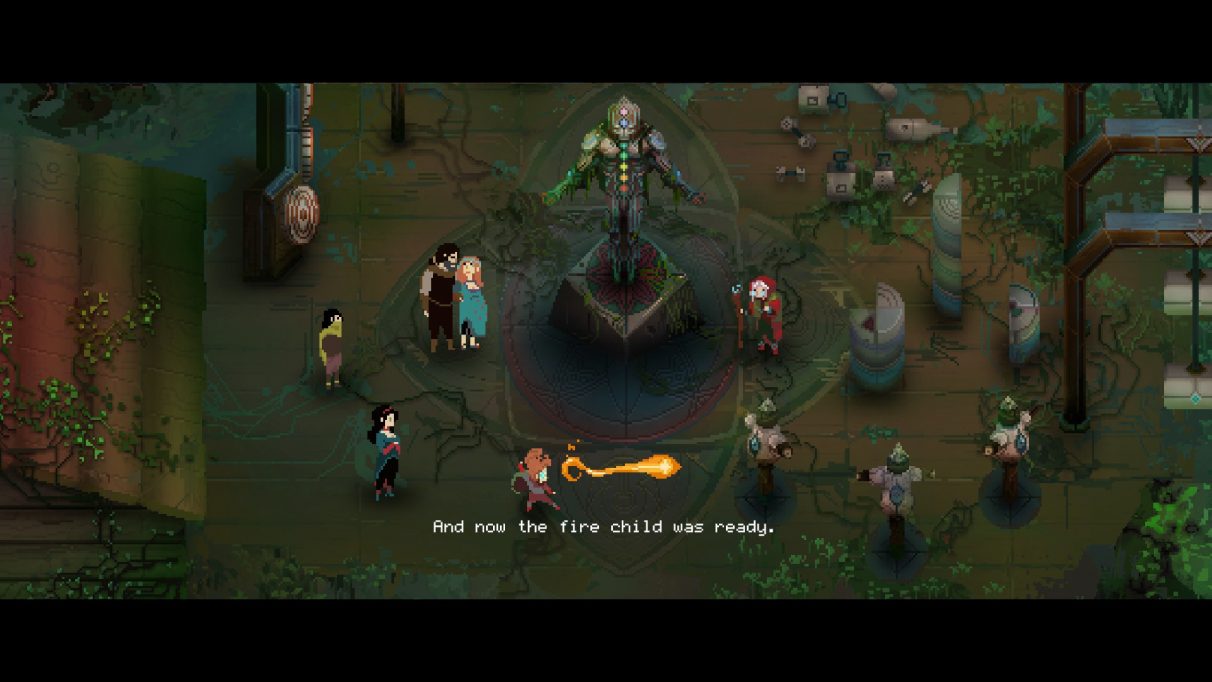 It misses a trick by not having a bit more humour or even a hint of conflict over this. Imagine the dinner table arguments with a teenager who can kick a goblin’s entire torso off, or a child who spends his spare time bouncing off the bedroom walls to practice his invisible murders. It may be thematically appropriate that the family is loving and brave and generally perfect, but everything’s so wholesome it’s just boring. Why would I care about any of these people? They’re only interesting when their kids are brutalising everything in their path.

I should stress that I’ve had fun with the fighting. Even after swearing off the starting pair, it’s necessary to play with them anyway, as characters are weakened by repeat trips to the caves thanks to ‘corruption fatigue’. This is a pretty good idea, and works well with the story. Better still is that upgrades bought with cash apply to all characters, and when each fighter reaches a certain milestone, they automatically add bonuses to the rest of the family too (devoted facekicker teaches everyone to dodge better, absolute monster Kevin improves their critical hit rate, etc). Eventually even the starter characters become powerful this way, and more features and power ups unlock the further you get. RPGs, particularly this kind of exclusively fighty, crowd-heavy RPG, do benefit from a tangible feeling of becoming more powerful, and all this does get you playing as less favoured characters. But combined with the grind it really burns you through the game’s content. 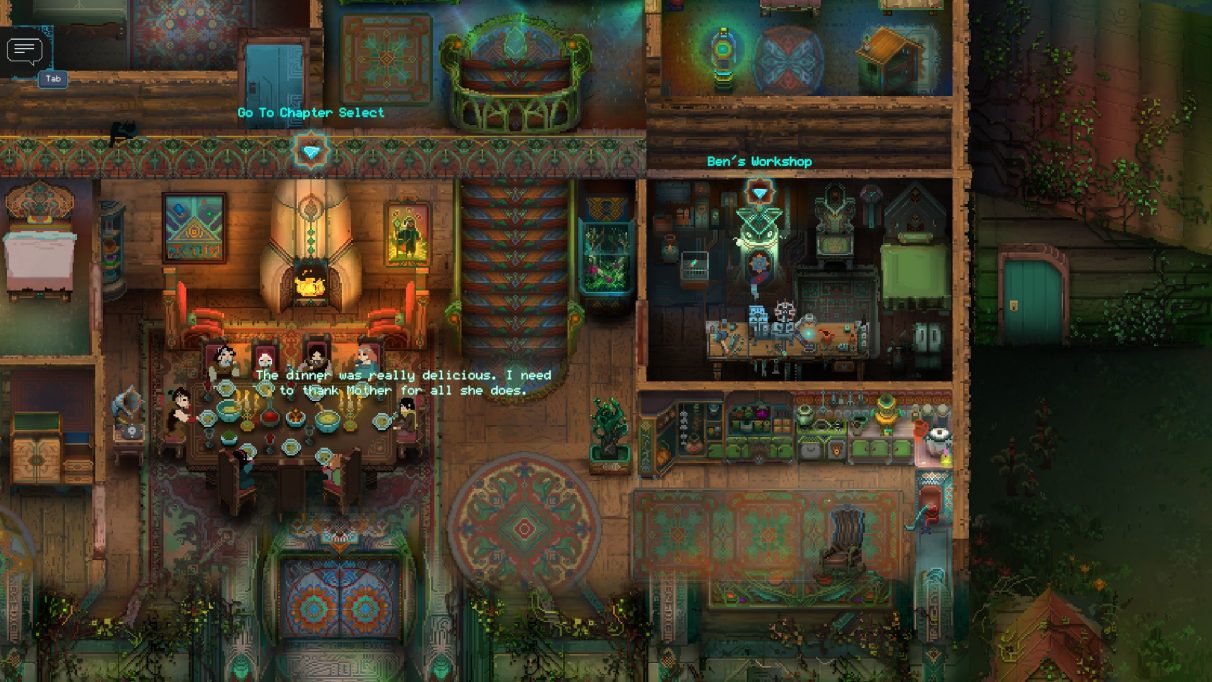 Every happy family is dull in the same way.

If the idea is to grind through 2-3 caves over and over until you can take the boss, that would work a lot better with more variety. Most of the first two caves is just skeletons and either spiders or goblins, and the third cave just combines the two. It’s impressively animated and they all splat nicely, but it’s the same monsters as every other game even before you realise you’ll have to fight them another three or four times. And then again with other members of the family. The promise of more powers – and some of them are great – comes at a heavy grinding price, and I’m not sure it’s worth the time.

My opinion of Children Of Morta has improved, and I can see it finding a happy audience. But if I wasn’t reviewing it I doubt I’d have got there. It leads with its worst foot and you have to grind for hours to drag the other one into the dance.

More about Children of Morta