As 2560×1440 gaming monitors go, the 32in Asus ROG Strix XG32VQR is probably one of the better screens you can buy today. I’d even go as far as saying it’s potential best gaming monitor material if ever suddenly became a lot cheaper than our current 1440p recommendation, the MSI Optix MPG27CQ, but even at its current price of £489 / $550, the XG32VQR is is still an excellent, superbly accurate 144Hz FreeSync 2 screen whose curved VA panel does almost everything you could possibly want from a high-end gaming display. It’s just so immensely frustrating that even now in the year 2019 its built-in HDR support is still such a faff to get working properly when it comes to playing all those lovely HDR games.

Admittedly, this isn’t so much the monitor’s fault as the terrible, ongoing state of getting HDR to play nice on Windows 10 in general, but it still put a bit of a downer on the whole thing that I could never quite shake during my testing. What’s more, even if you do have the requisite AMD graphics card in order to take advantage of it, it’s not like its HDR is really going to blow your socks off anyway, as it only meets VESA’s lowest HDR certification at the moment, DisplayHDR 400.

That means its peak brightness must reach at least 400cd/m2 (a feat that several non-HDR monitors can already do anyway), and have a colour accuracy score of at least 95% on the BT 709 (i.e: the standard sRGB) colour gamut scale. Not the DCI-P3 colour gamut, which is normally used to measure HDR screens. Oh no. Technically, it doesn’t need to meet any kind of requirement for that particular gamut – although thankfully Asus have gone above and beyond the call of duty here, stating that it should cover at least 94% of the DCI-P3 gamut over on the monitor’s specs page. 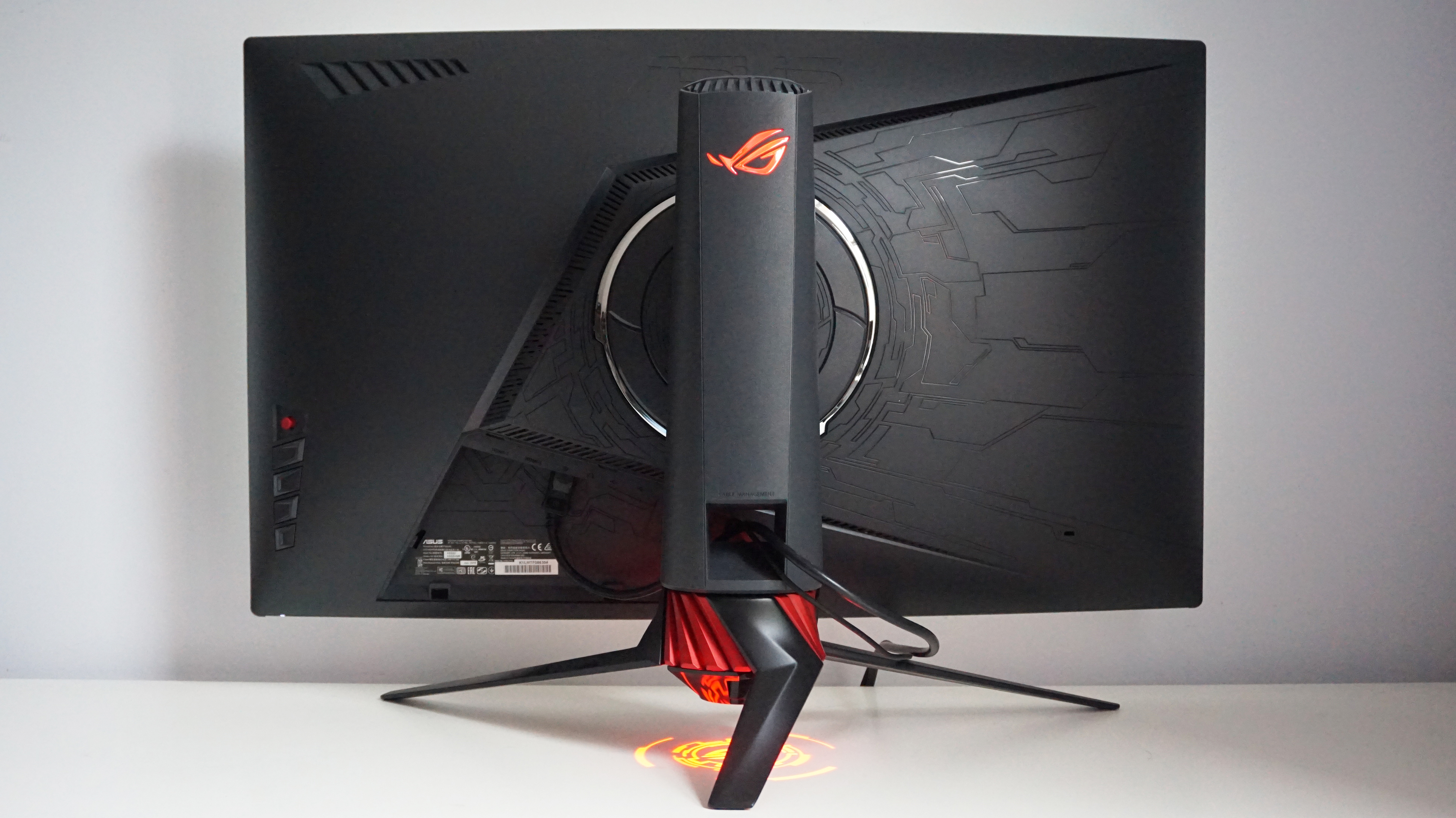 In truth, I wasn’t able to get anywhere near that figure in my own testing. The best I came with my X-Rite i1 DisplayPro calibrator was 86% DCI-P3, and that was after I’d tinkered with its customisable User settings and calibrated the monitor. I’m not too worried about it, though. 86% is still pretty great in the grand scheme of things, and a lot of the best HDR screens out there usually only have a fraction more coverage around the 90% mark.

Instead, a more pressing concern for me is the XG32VQR’s sRGB coverage, and I’m happy to report this is absolutely exceptional, hitting a fantastic 99% of the gamut. This more than makes up for those couple of missing per cent over in the DCI-P3 arena, as colours still look rich and vibrant even when you’re not doing anything in HDR. I also saw a lovely high contrast ratio of 2860:1, and a pleasingly low black level of 0.19cd/m2 (the closer to 0.00cd/m2, the better). 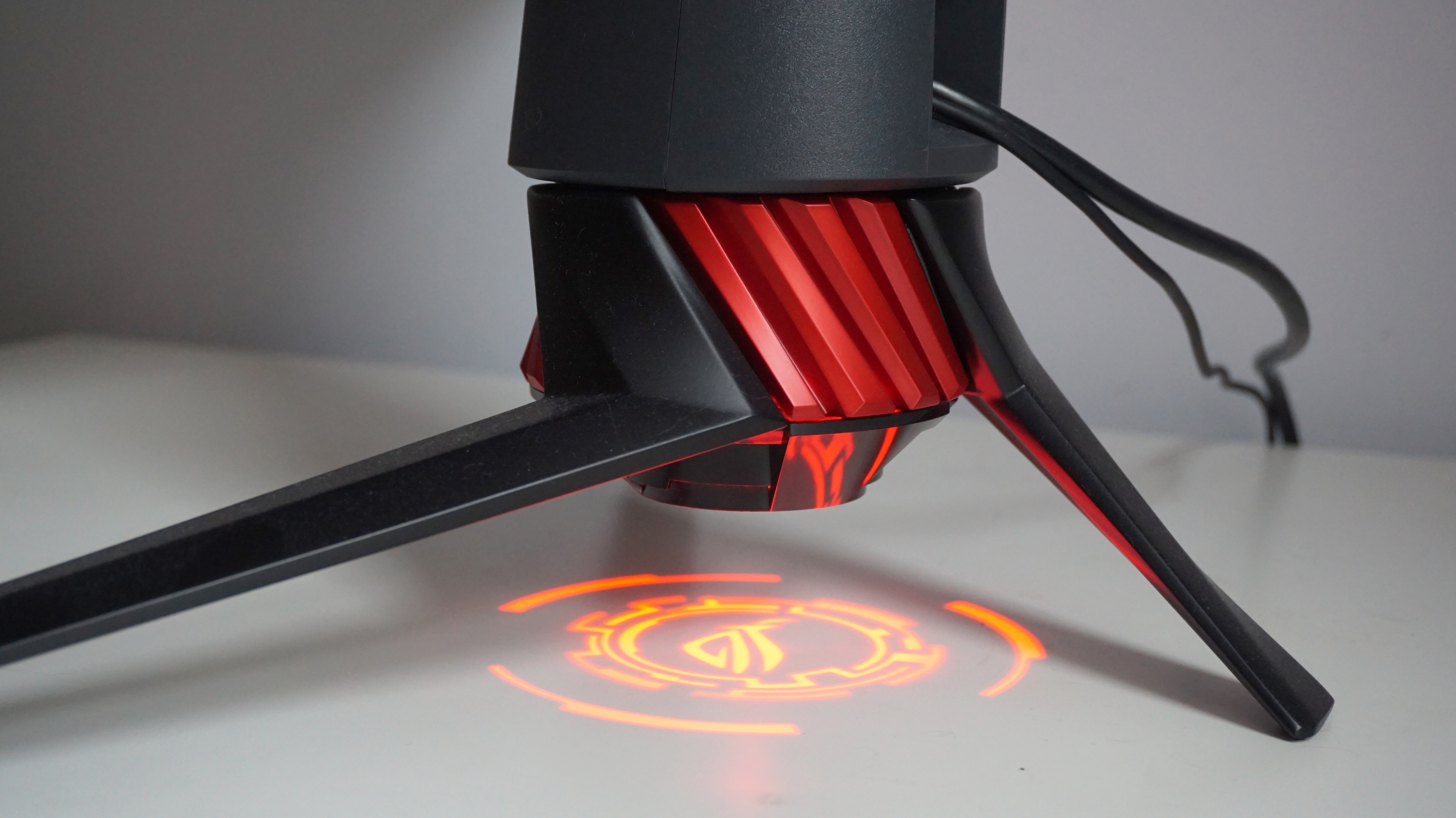 It wouldn’t be an Asus monitor without a light-up ROG logo being burned into your desk.

Its maximum brightness is also a lot higher than its DisplayHDR 400 certification might imply. On its FPS preset, for example, I actually measured a peak white level of 567cd/m2, although it did drop down to around 530cd/m2 when I switched over to User mode. Still, that’s pretty darn bright at the best of times, and almost unbearably so when its deep stand means you’re forced to have it quite far forward on your desk and you’ve got its 1800R curvature radius wrapping itself around your already overwhelmed eyeballs. Indeed, I found I often had to turn the monitor’s brightness right down to somewhere near the other end of its brightness scale for everyday use, as it was simply too much to look at for eight-odd hours a day.

On the plus side, though, man alive does it make those highlights really sing when you finally succeed in wrestling its HDR to life. In Final Fantasy XV, for example, the lively city of Lestallum really came alive on the XG32V when I was rummaging around its narrow streets at night-time, the bright, piercing glow of its street-lined lanterns creating a palpable sense of contrast to the pitch black sky above. 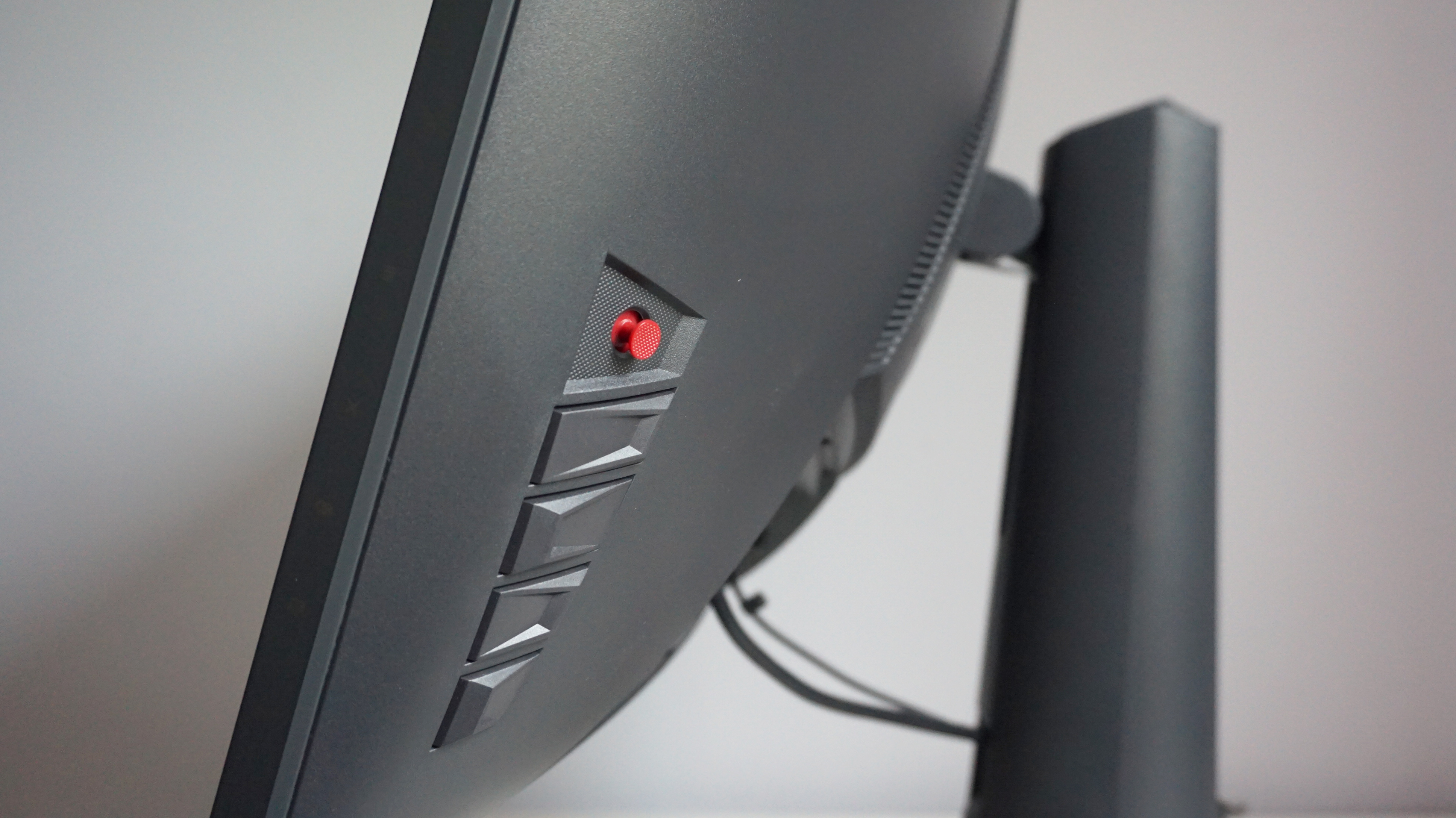 However, even with a peak brightness of nearly 600cd/m2, the XG32VQR still can’t compete with, say, a proper HDR TV that can pump out a whopping 1000cd/m2 of brightness to make its day scenes just as exciting and impactful to look at as its evening ones.

Yes, the autumnal forests of Assassin’s Creed Odyssey looked lovely and vibrant on the XG32VQR, but the quality and overall wow factor of the midday sunlight left me cold. It also took quite a bit of wrangling before I got Odyssey’s various in-game brightness bars to behave, too, which is particularly annoying when this is one of the few games around today that specifically supports AMD’s FreeSync 2 HDR standard.

I also noticed a very mild flickering going on whenever I had HDR enabled, too, as if the backlight was going a bit haywire trying to keep its bright bits bright and its dark bits dark. This definitely isn’t something you want to deal with after spending a million years getting it to work in the first place, and just made me want to turn the whole thing off and play in regular ‘SDR’. 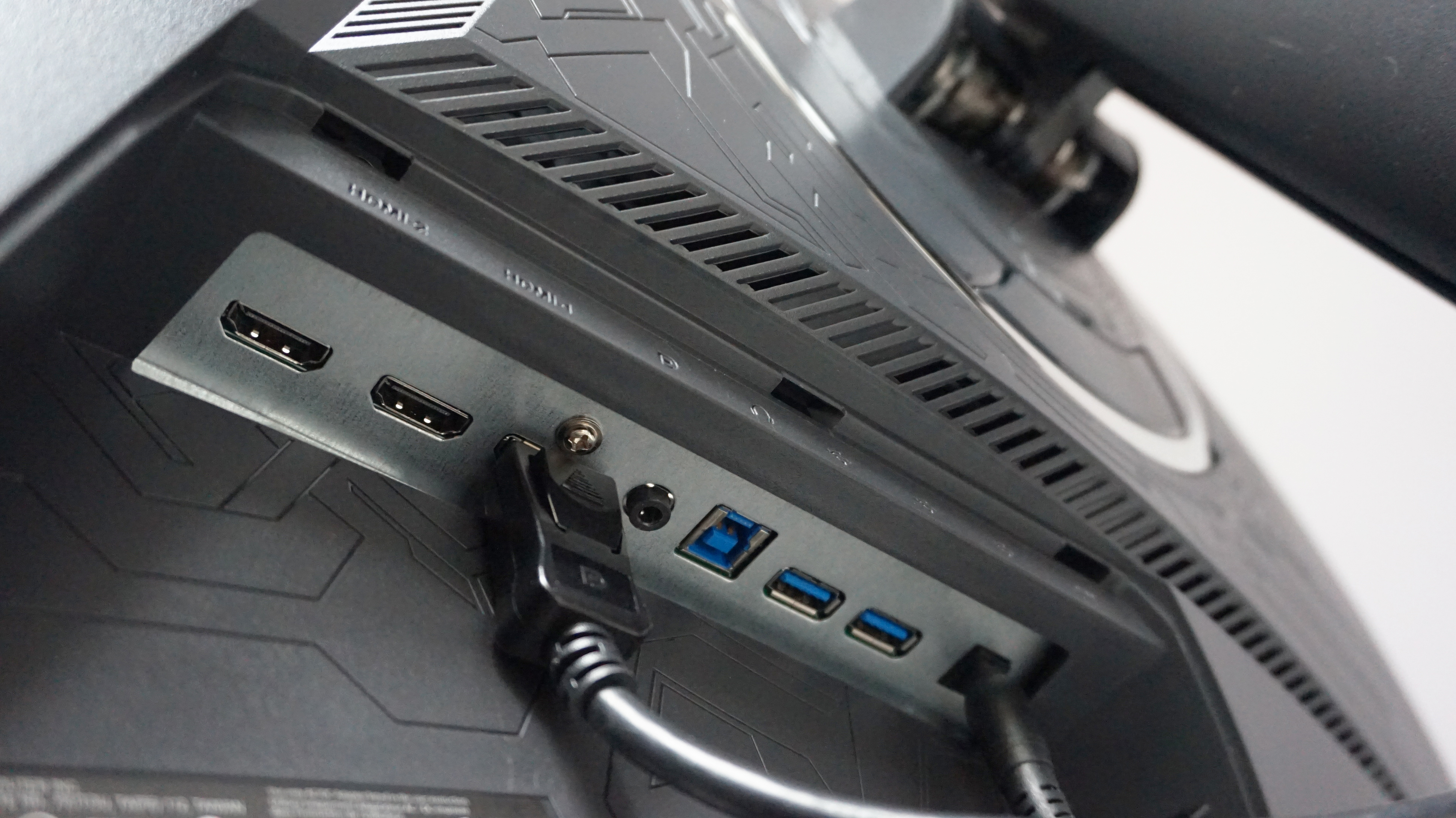 The XG32VQR comes with a decent selection of ports, including two HDMI 2.0 inputs, a single DisplayPort 1.2, a headphone jack, and two USB3 ports.

I wouldn’t recommend buying the XG32VQR as an HDR monitor, then, but as a regular 1440p monitor with a 144Hz refresh rate, there’s a lot to like here. While not technically one of Nvidia’s official G-Sync Compatible monitors> (yet, anyway), I didn’t notice anything untoward when I tried playing games at 144Hz with an Nvidia graphics card plugged into my PC, for example, and it handled the fast-paced action of Doom without a single bit of screen tearing, too. As such, I reckon Nvidia graphics card owners will probably be perfectly fine buying this as variable refresh rate screen. Just don’t try using HDR as well, because hoo boy it ain’t pretty, lemme tell ya. 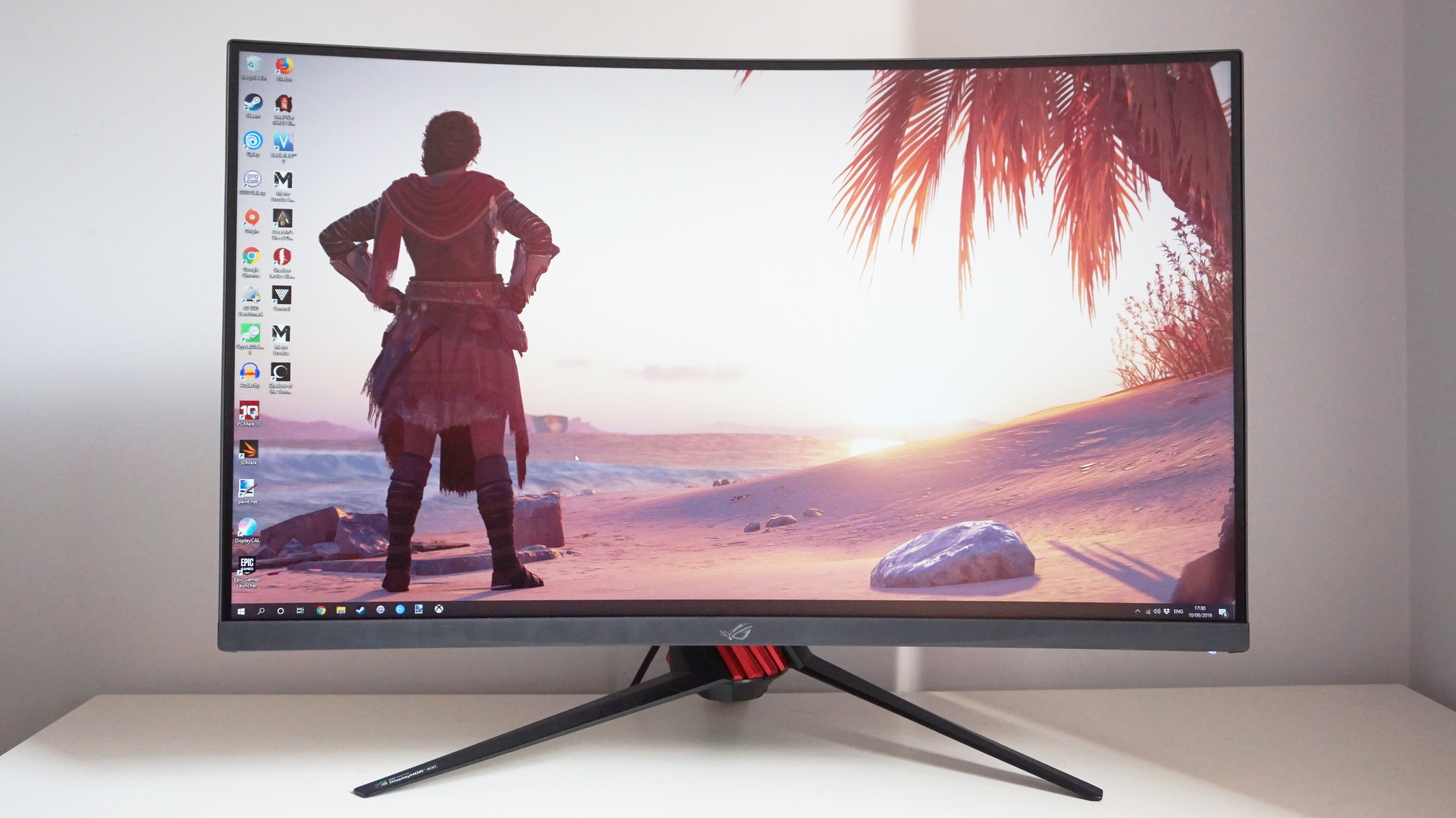 The XG32VQR’s viewing angles were good, too, and I was also pleased to see five different blue light filter settings in its easily-navigable onboard menu system. The only remaining hurdle is the price. At £489 / $550, it’s more expensive than both my current best 1440p monitor choice, the MSI Optix MPG27CQ, and two of its very similarly-specced FreeSync 2 HDR rivals, the AOC Agon AG322QC4 and BenQ EX3203R.

The Asus does, admittedly, beat both on image quality by quite a considerably margin, but when the AOC can be had for £385 / $500 while the BenQ is currently an even more appealing £380 / $450 at time of writing, some might find it hard to justify spending almost £100 / $100 more on another 10% sRGB coverage and 15% DCI-P3. Personally, I’d be tempted to go with the AOC if I was choosing a FreeSync 2 HDR monitor today, if only because I didn’t see any flickering when I did eventually get HDR working. It also has a handy headset hook on the side and a second DisplayPort input round the back, which its rivals lack.

Really, though, the £420 MSI Optix MPG27CQ still reigns supreme for me in the 1440p category, although I’m keenly aware it’s becoming increasingly difficult to get hold of these days, especially over in the US. I’ll do my best to test some more 1440p monitors soon to try and find a new best gaming monitor contender to replace it, but until then, the MSI MPG27CQ is still the monitor to beat if you can find it.