Nate was talking to me the other day about how weird it is that games are considered, like, one single form of art, because he reviewed Wilmot’s Warehouse and then went straight into Borderlands 3. And similarly, while he and Matthew were shnorting 30 hours of a big bombastic looter-shooter like that one kid at school who used to huff entire pixie sticks up his nose, I was playing Mutazione, a slow paced story about talking to sausages and growing things.

Kai, a lanky teenager with one sock always falling down, has come to the titular island community that her mum grew up in, because the grandfather she’s never met is deathly ill. Said grandfather, Nonno, is one of the only human inhabitants left in what is now a small town of mutants, based around a great big tree that’s central to the local ecosystem. 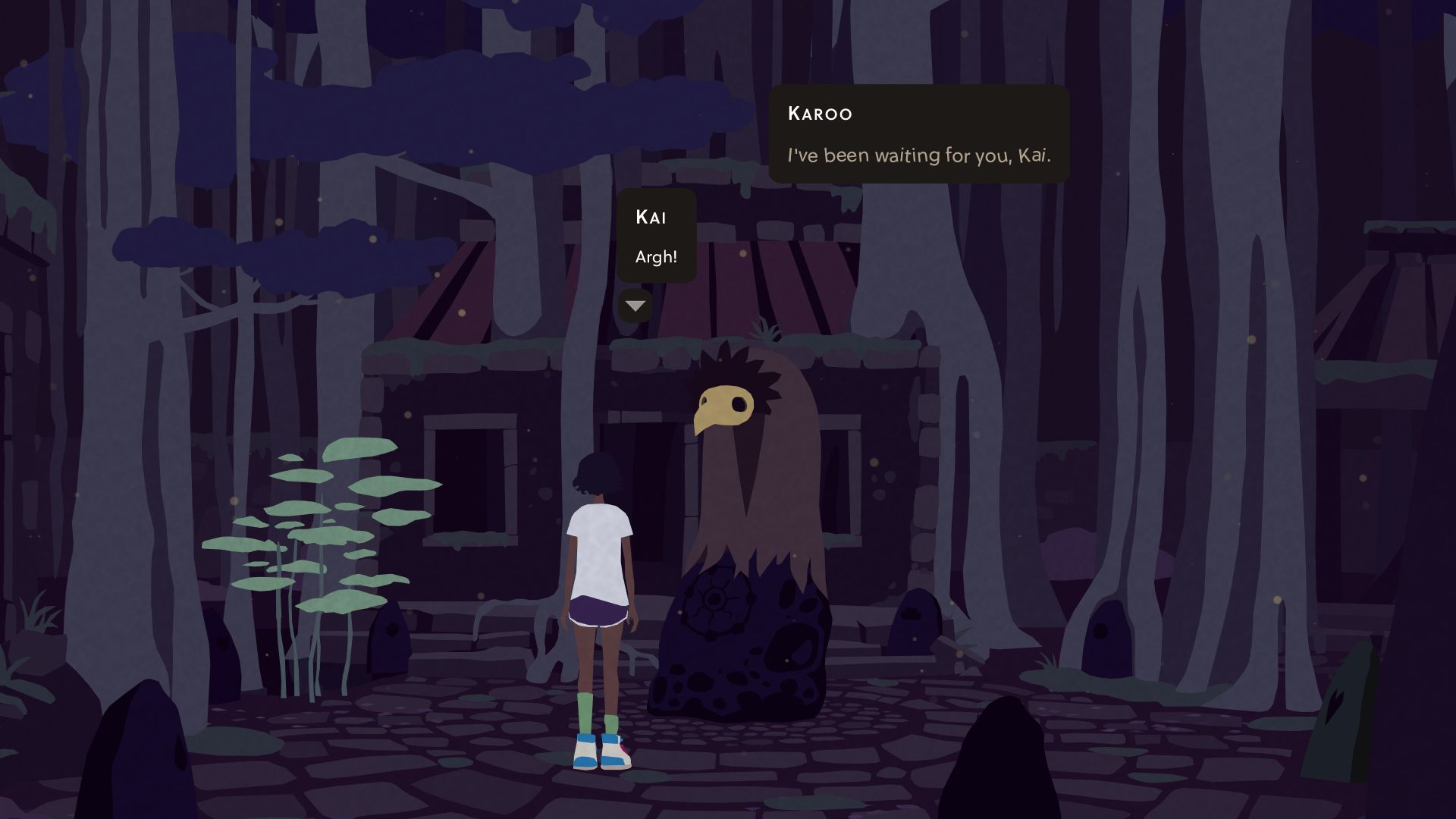 Decades ago, a meteor crashed into what was probably a tourist town, and the survivors gradually changed into slightly different types of people. Nonno himself arrived with a group of scientists around 40 years before the events of the game, but his wife and daughter eventually left, and he elected to stay as the Shaman of the village. But all is not well in Mutazione, both on an interpersonal and ecological level. These levels are, in Mutazione, almost the same thing.

It reminds me a lot of Night In The Woods. The strong feeling of place, the feeling of a place that’s at odds with itself, and the tension of younger residents who are starting to feel the pull of elsewhere, but don’t really have a way to respond to it. And the emphases on family, how you choose family, and how you work through mistakes. And the curious blending of natural bickering and supernatural oddness. The latter is expressed through a version of Shamanism, featuring spirit animals, that I am not expert enough to assess for insensitivity.

This world is full of insects and lizards and strange beetles. It feels alive. But relaxed. 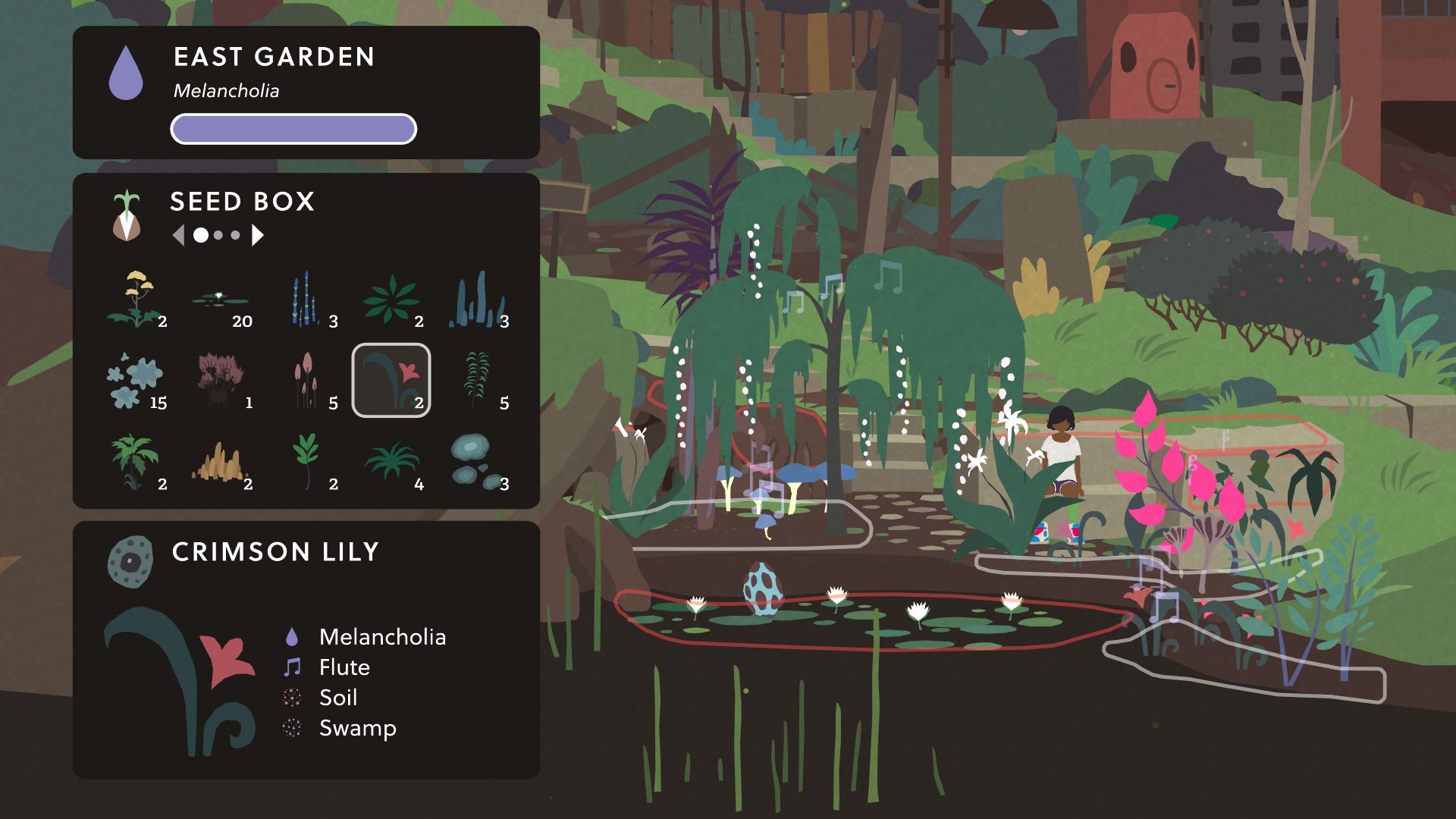 Mutazione, a name which I am still not entirely sure how I should pronounce (but have been plumping for a kind of cod-Italian Mario flourish), is deliberately quite slow, you see. Every day Kai walks around the very small town and chats to some of the inhabitants, and learns a little more, and listens to the infuriating old-man vagaries Nonno tells her about plants and feelings. You can choose the timbre of your responses, or what to focus on — kindness or realism, for example — though it doesn’t change the outcome of the game. Equally, you can express frustration that Nonno won’t just tell you what you have to do.

What you have to do, it turns out, is grow things using songs. People talk to plants, after all. Mutazione has a lot of weird mutated flora, and you collect their seeds and spores to cultivate them in different areas to create small gardens. Each plant has a different preferred climate to grow in, but they also create different sounds. Some create the plucking of an acoustic guitar, others little scratchings or rattlings, and some sad ambient sounds.

Mutazione allows you to be an artist, as you choose where your plants will grow, perhaps with a big splash of pink leaves on the left and a smattering of bright mushrooms across the ground, and also a composer. Then you can sit and watch, and listen to it. It’s a miracle that all the little sounds come together to make music.

But the plants also represent and create different moods. The garden full of Wanderlust plants makes people think of change, or leaving the island. You grow the melancholic garden on a sad day, and it allows everyone to express their sadness. 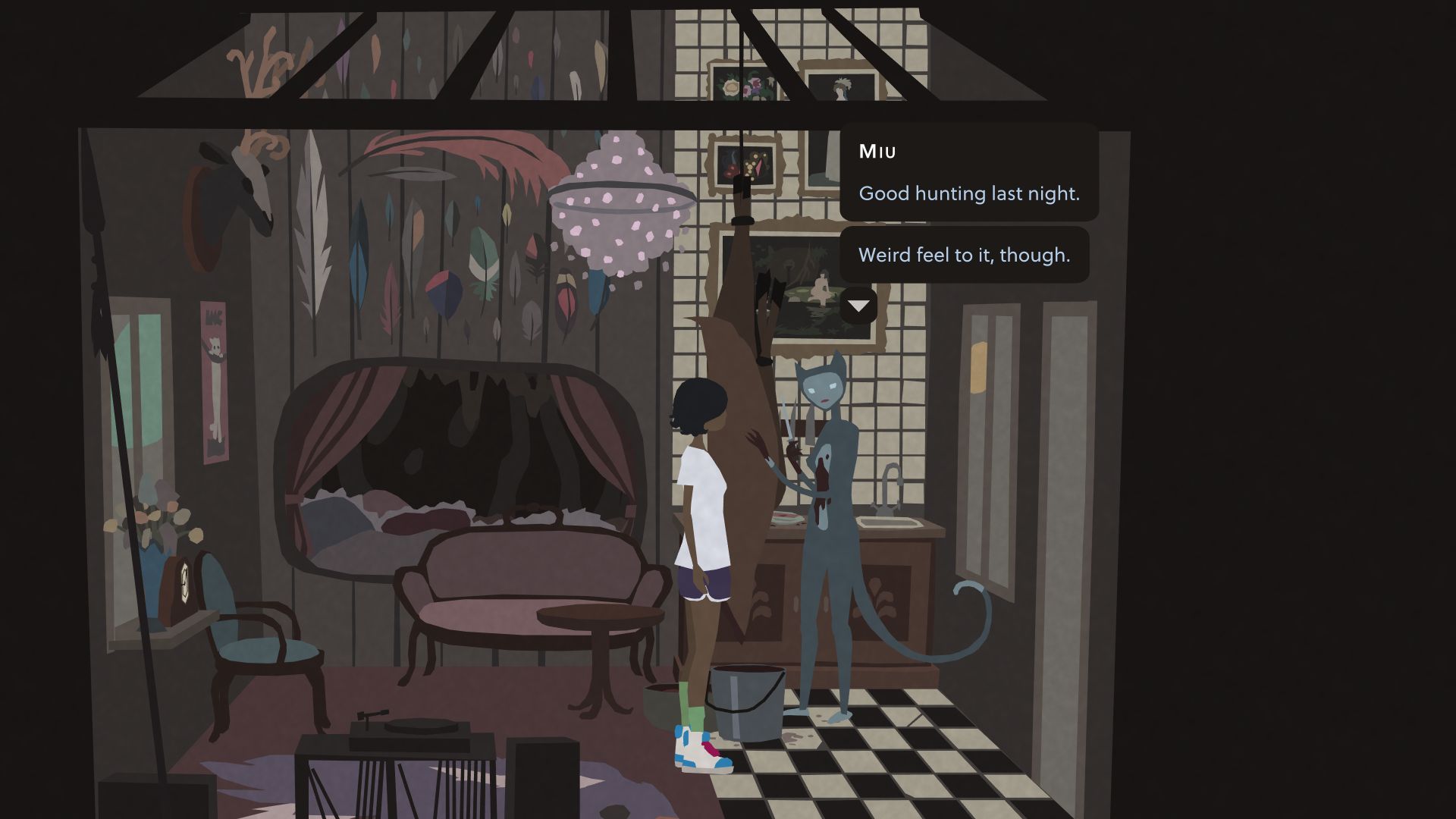 Most of the inhabitants of Mutazione are engaging and lovely, especially the ones who aren’t. You will have favourites, and you will know where to find people, running around to talk to everyone like you would in the hub area in a BioWare game. Dennis is crotchety and infuriating, and you feel like Claire needs a good shake sometimes, and I liked stomping off to hang out with Tung, binge-watching an Italian soap opera he didn’t understand. A stated goal of the game is to be something like a soap opera itself, with arguments and romance and betrayals, deep-rooted anguish and the like. But some characters are more rounded than others, some changes of heart happen too rapidly (necessarily for the short time frame of the game, I suppose) and some responses to the various emotional crises seem a bit too bloody reasonable, a bit too cool, to be comfortingly real. But at least at one point, a character gets angry at the ‘reasonable’ card being played – so I’ll give it a pass.

Not so for a character who lampshades the fact that the in-game encyclopedia of plants is, while pretty, very annoying to leaf through. Plants are arranged alphabetically, but there’s no way to shortcut through to the end if you’re after something beginning with Y. Or there might be. A couple of things in Mutazione aren’t highlighted strongly enough to befit how important they end up being (I spent ten minutes traipsing up and down the island because I hadn’t realised I needed to crawl through a pipe in a corner of a room), and this could be the case with the encyclopedia as well. 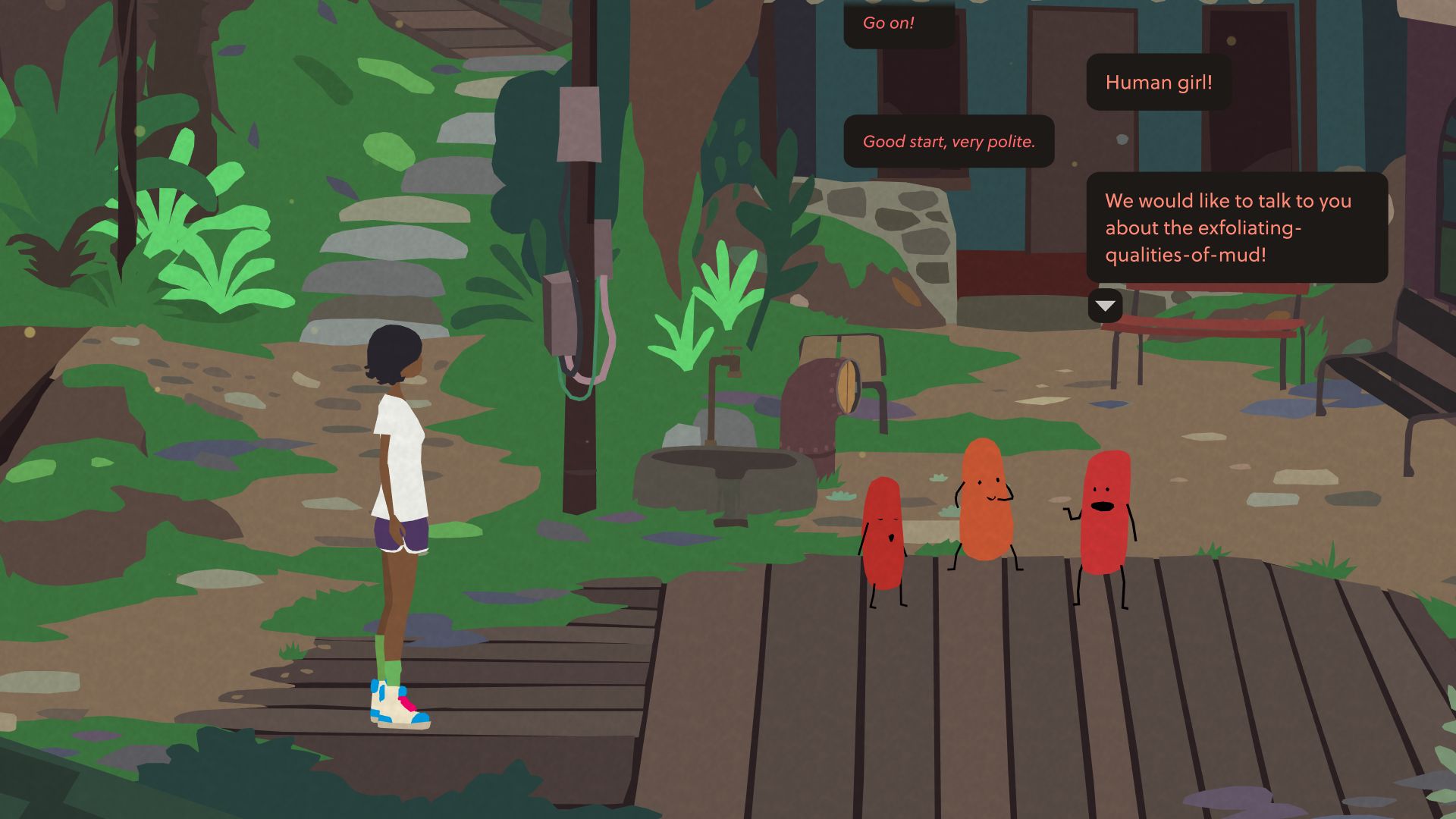 But the community itself is the important bit. The characters aren’t voiced, but they feel like they are. The text bubbles are sometimes animated, sometimes shaking with trepidation, sometimes small like a whisper, sometimes big with anger. And each character speaks accompanied by a sound. Miu, who becomes a close friend, is a lithe, cat-like creature with pointed teeth, and she sounds like the delicate plucking of violin strings. Jell-A, a sentient fungoid growth, is the town’s subterranean scientist, and his voice is squishy, but with a side of liquid dripping and bubbling in a glass flask. It’s excellent work.

They’re also brilliantly drawn and animated. My favourites ended up being the smaller, more mutant-y mutants. There’s a team of red, talking sausages who spread manure on the tree roots and are constantly trying to come up with new business plans to corner non-existent markets. I like to think they are descended from a businessman’s buffet plate. Living in the branches are the Dots, many-legged blue circles who speak their own language and have amazingly pure, expressive faces. Here is a close up of one of them being taught to fish: 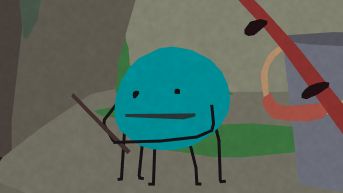 The Dots and the business sausages are essentially opposites, a group of market-researching meaty tubes at one end and a tree dwelling tribe of blueberries at the other. They’re very funny in different ways, but also represent a central theme in Mutazione, which is: balance. Sadness and happiness can both be beautiful; things don’t always need to be fixed or understood, they can just exist; life and death are both essential to survival. These takes aren’t, I will grant you, especially hot or obscure. It is, after all, a game set on a tourist island that was destroyed but has grown new life. But, still, meat tubes and blueberries do both have value. Just like hoovering up pixie sticks, and sitting in lovely gardens. Probably.

(Disclosure: Hannah Nicklin, who has written for us, is studio and narrative lead at Die Gute Fabrik.