I’ve been superintending Saracens, Saladins, and Scouts in the Fulda Gap for the last few days courtesy of Armored Brigade (this column concludes with some thoughts on the current state of the game plus a competition with two expanded copies as prizes). This restricted play diet in combination with some compelling TV documentaries has turned my thoughts to the Troubles, a conflict that my extensive wargame library insists never happened. 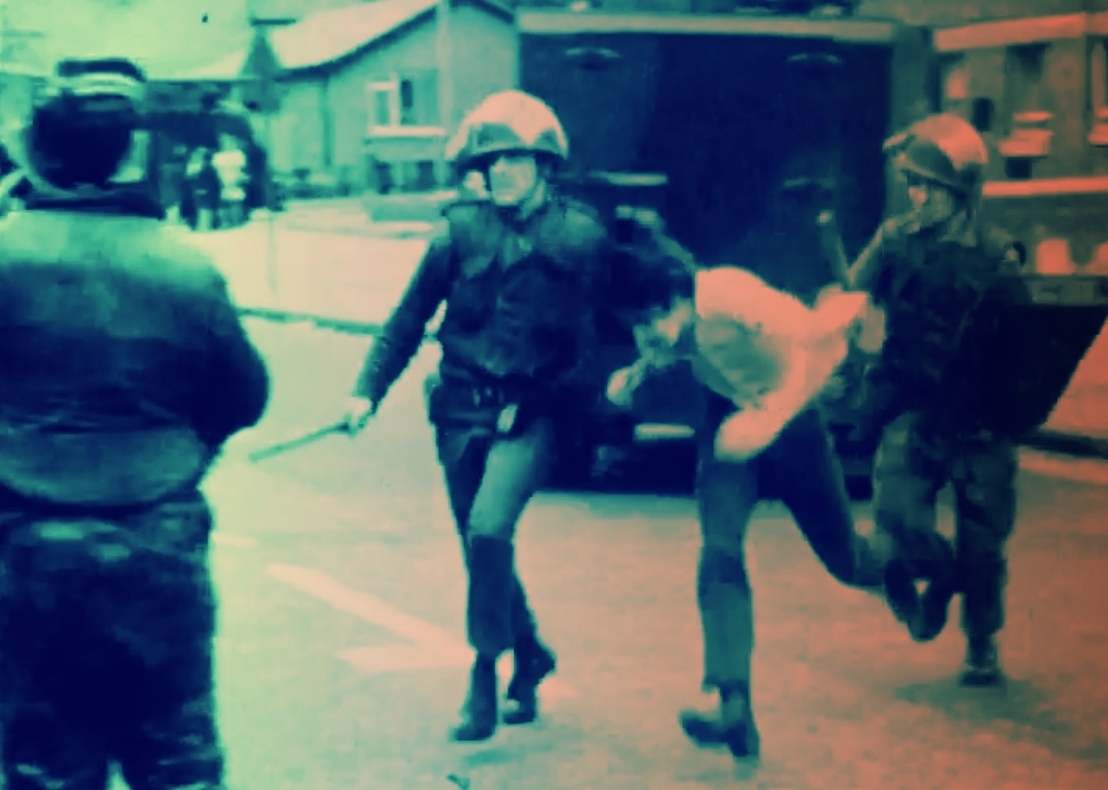 Fifty years ago this summer, in response to sectarian and political violence in Northern Ireland, the British Army launched an operation that would end up lasting 38 years and testing its training, leadership, neutrality and forbearance, in some cases, well beyond their limits. 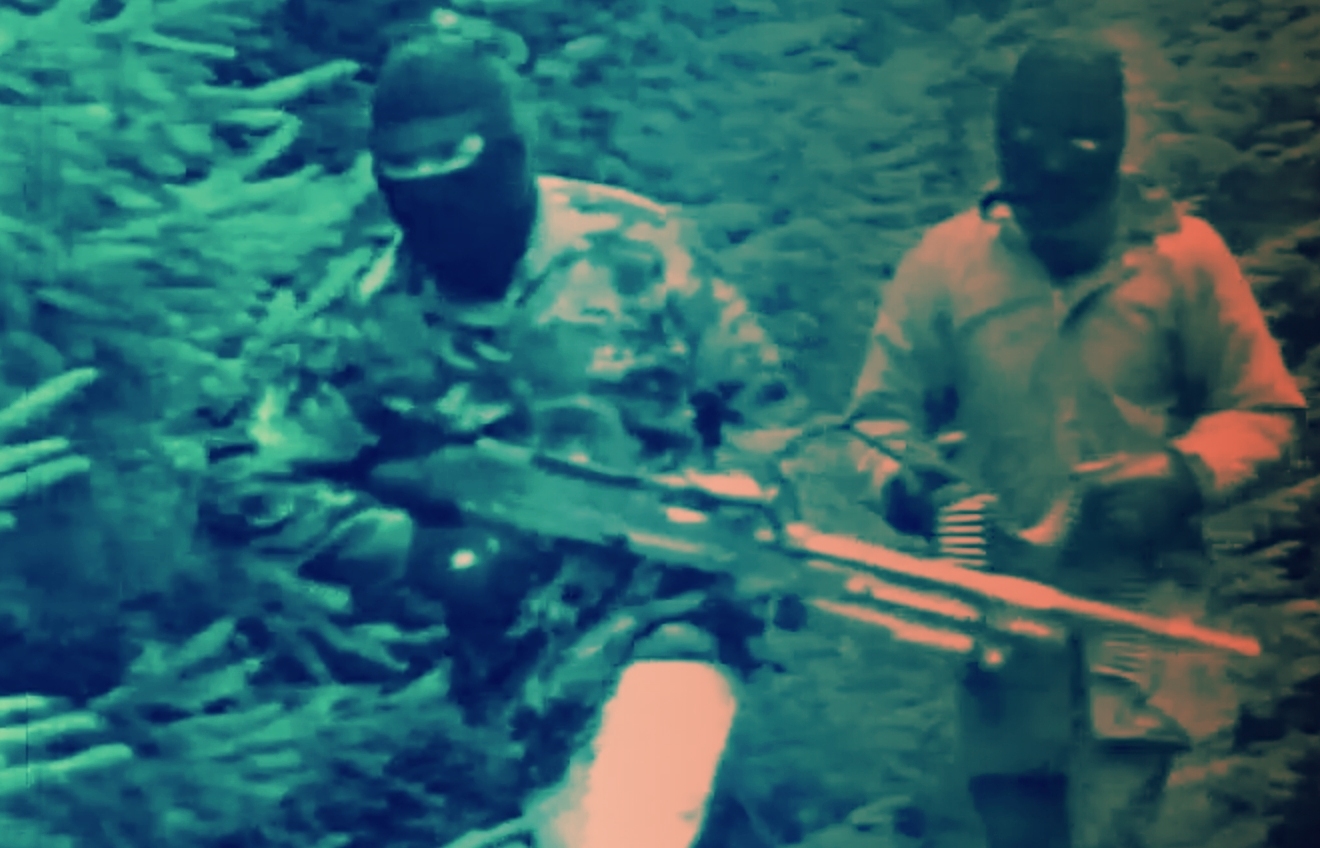 Why have I never played a wargame set during this terrible, tangled, important phase of British history? One fairly obvious reason is that the war across the water doesn’t lend itself to traditional treatments. The vast majority of the 1049 service personnel and 530 paramilitaries killed by enemy action during the conflict* were slain by bombs, IEDs and snipers. They were cut down in ambushes and counter-ambushes, assassinations and surprise mortar attacks. Significant skirmishes were very rare, bona fide battles unheard of. Our most versatile and cosmopolitan tactical engines, Combat Mission, Close Combat, the Campaign Series, Squad Battles etc, assume combatants on both sides are willing to stick around… go toe-to-toe. To model the Northern Ireland conflict in a meaningful, engaging way, you’d probably need to do what the COIN-curious Johan Nagel did with the Vietnam War – build a bespoke engine from scratch.

Some potential digitisers may also have glanced at the conflict and mistaken the lack of clear-cut clashes and shifting frontlines for a dearth of tactical texture and dynamism. The widespread mainland perception of the Troubles as decades of inevitable bloody stalemate with the unhappy British Army stuck in the middle, fails to recognise the fluidity and malleability of the situation in the Six Counties particularly at the start of the 1970s, a time before positions hardened and the “Long War” began. 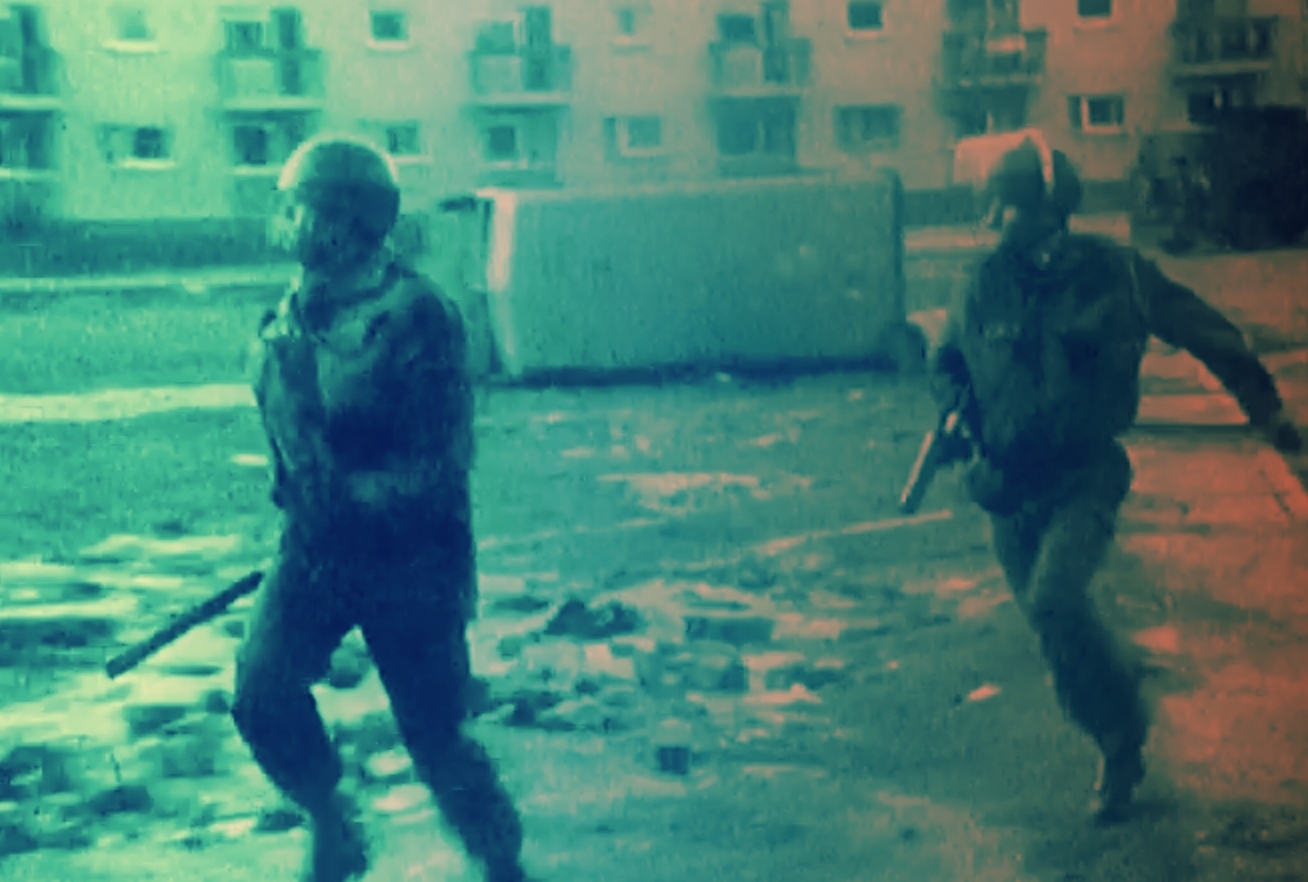 Armed with a little history, it’s not that difficult to picture, say, an illuminating hearts-and-minds wargame played from a British Army perspective or a novel peace-brokering puzzle game played from an unaffiliated humanitarian one. Can you do what the British failed to do – keep the peace, defuse tension, and withdraw relatively quickly? Can you maintain impartiality and avoid becoming the IRA’s most effective recruiting sergeant? Playing as peace-hungry go-betweens, are you able to turn a ceasefire into something more enduring? Is it possible to design a deal that simultaneously persuades the Republicans to lay down arms and reassures hardline Loyalists? 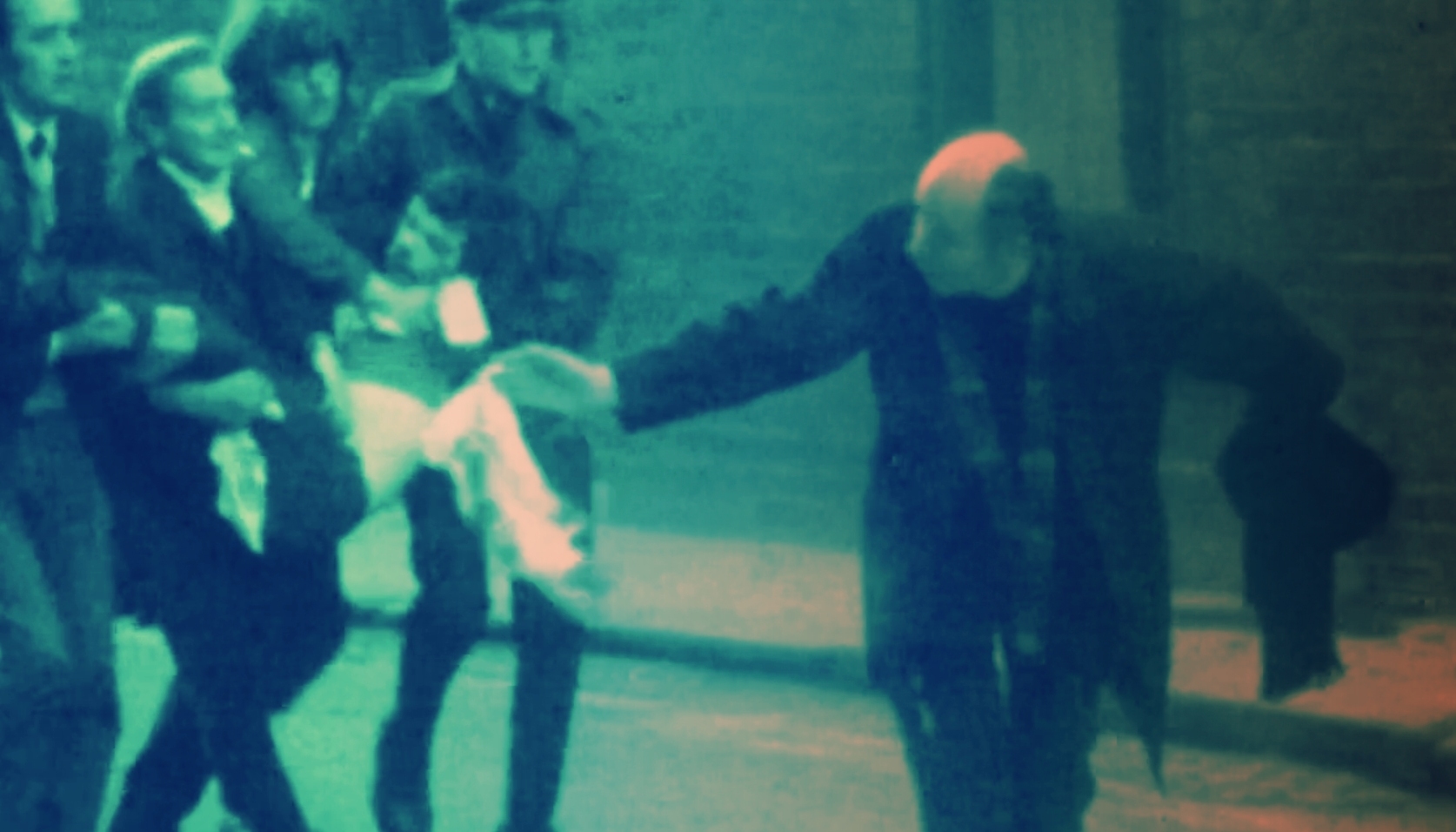 I’ve spent significant portions of my gaming career grabbing glory with red-bereted Red Devils. Having re-run the Parachute Regiment’s finest moments countless times, I think I’m ready to confront and acknowledge its most shameful ones. Like many, I don’t wargame solely to win or lose. I’m not here purely for the mayhem and the materiel. These diversions are also doorways and reminders. 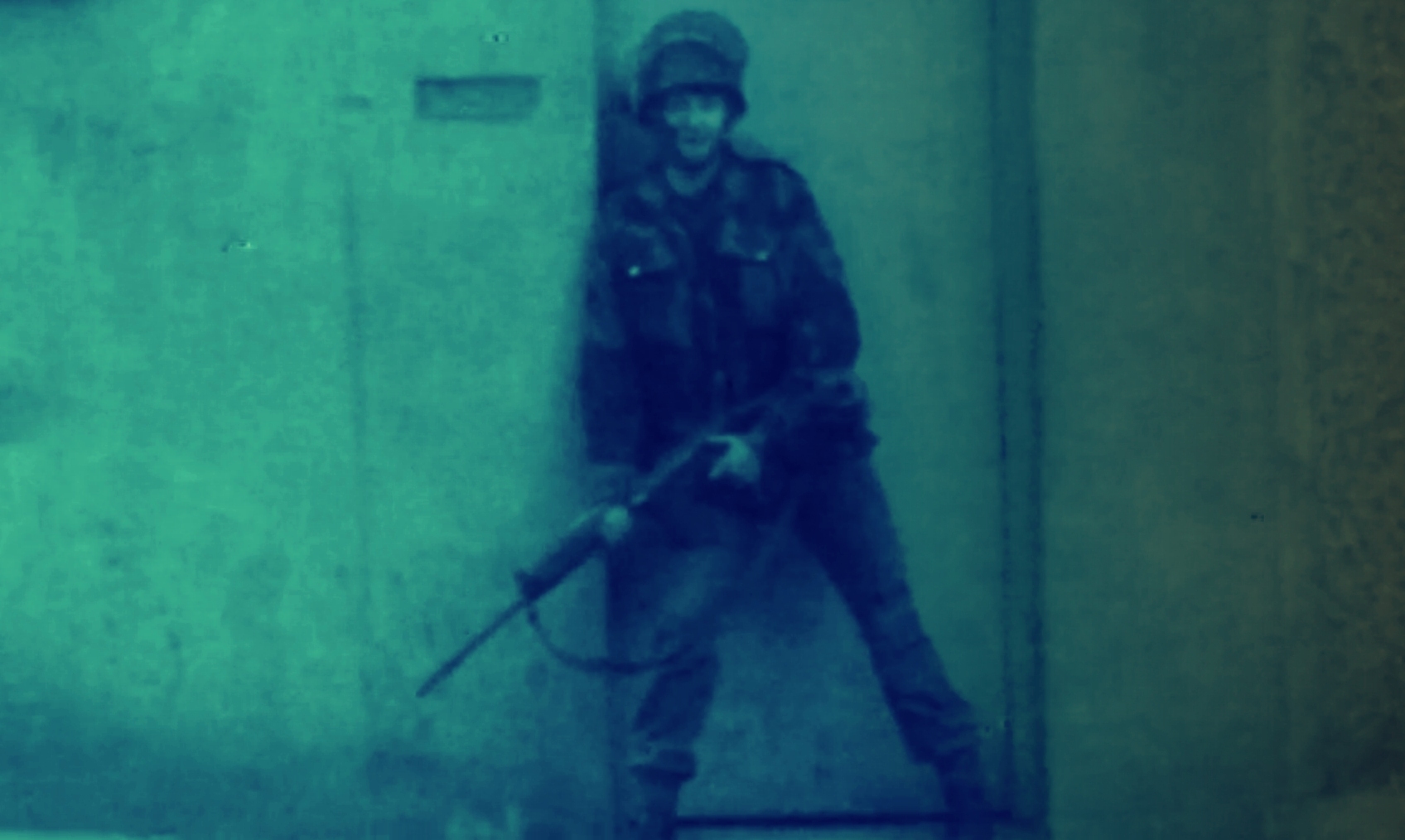 If, like me, you’re a Brit from the mainland, I believe it’s vitally important to understand and remember the sacrifices and mistakes made in our name in Northern Ireland during the Seventies, Eighties and Nineties. Without a strong grasp of this period, it is difficult, for instance, to appreciate just how precious the Good Friday Agreement is, just how dangerous anything that imperils it. 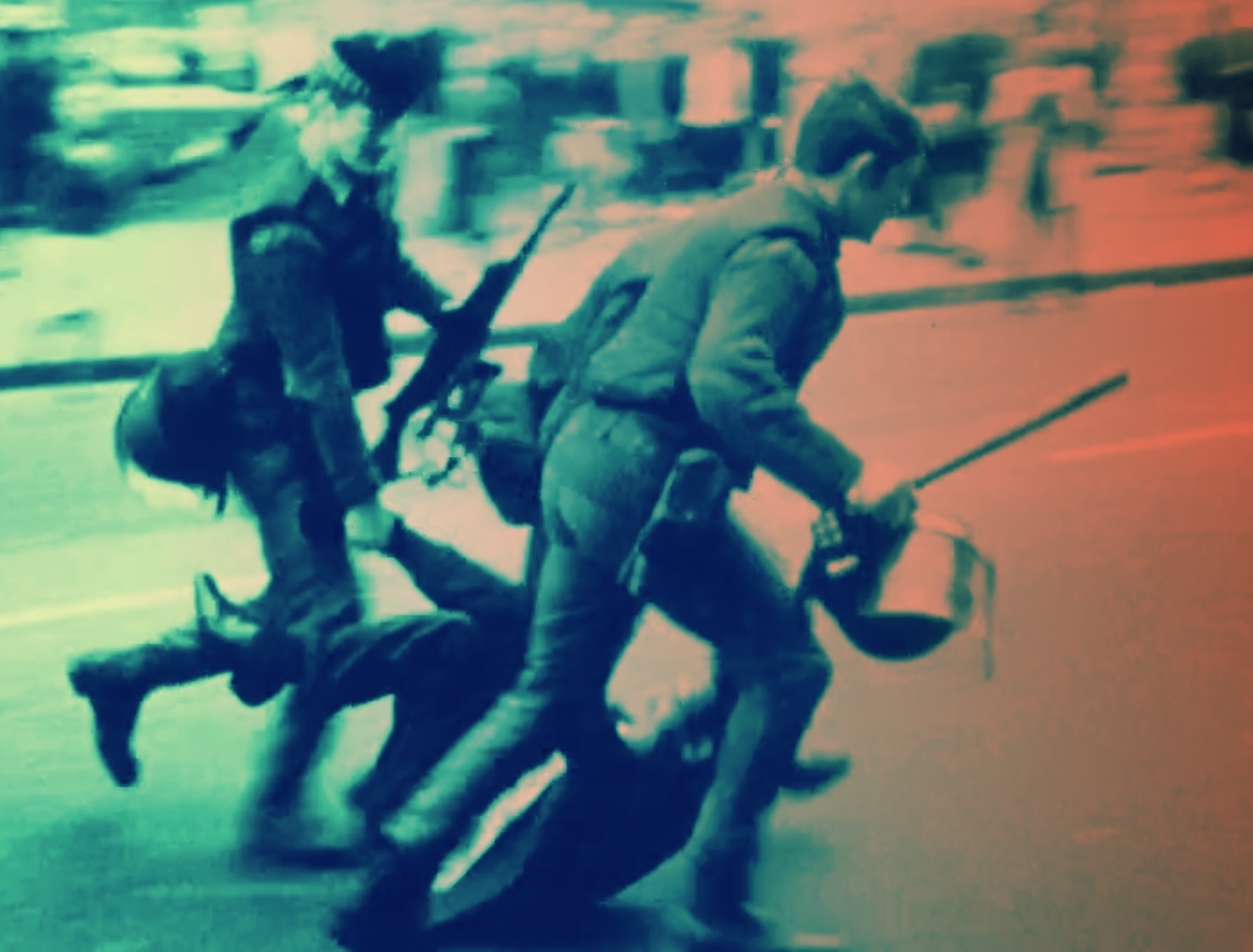 There’s no good reason why a game set during the Troubles couldn’t engross as efficiently as it educated. Penalising those who used sledgehammers to crack nuts, packed with double- or even triple-edged weapons (curfews, internment, collusion etc.), and featuring a player constrained by an inconsistent political master, the British-Army-as-peacekeepers design that’s spontaneously coagulating in my head at the moment would certainly stand out from the herd. There are thousands of strategy games available which show armies doing what armies do best, and almost none that show them struggling to make sense of environments as charged and complicated as Northern Ireland. 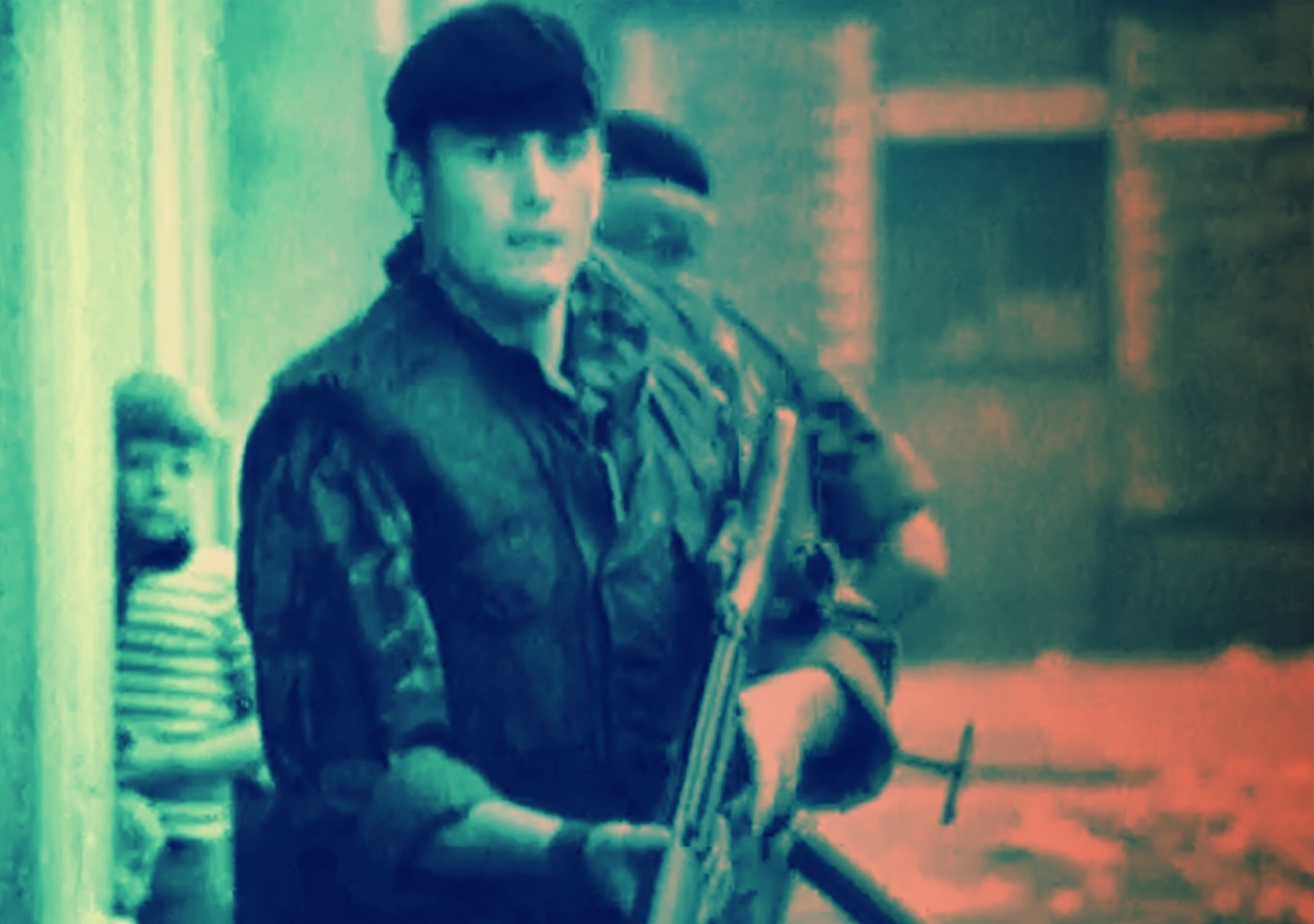 As many of the victims of the Troubles were civilians murdered by paramilitaries in tit-for-tat sectarian killings, and there are thousands still living with the dreadful physical and mental scars of the war, any game set in this period would, of course, have to be as sensitive as it was serious. The odd studio has tackled the Israel-Palestine situation with tact and insight so I can’t see any reason why the similarly divisive/contemporary NI conflict should be out-of-bounds on taste or freshness grounds. 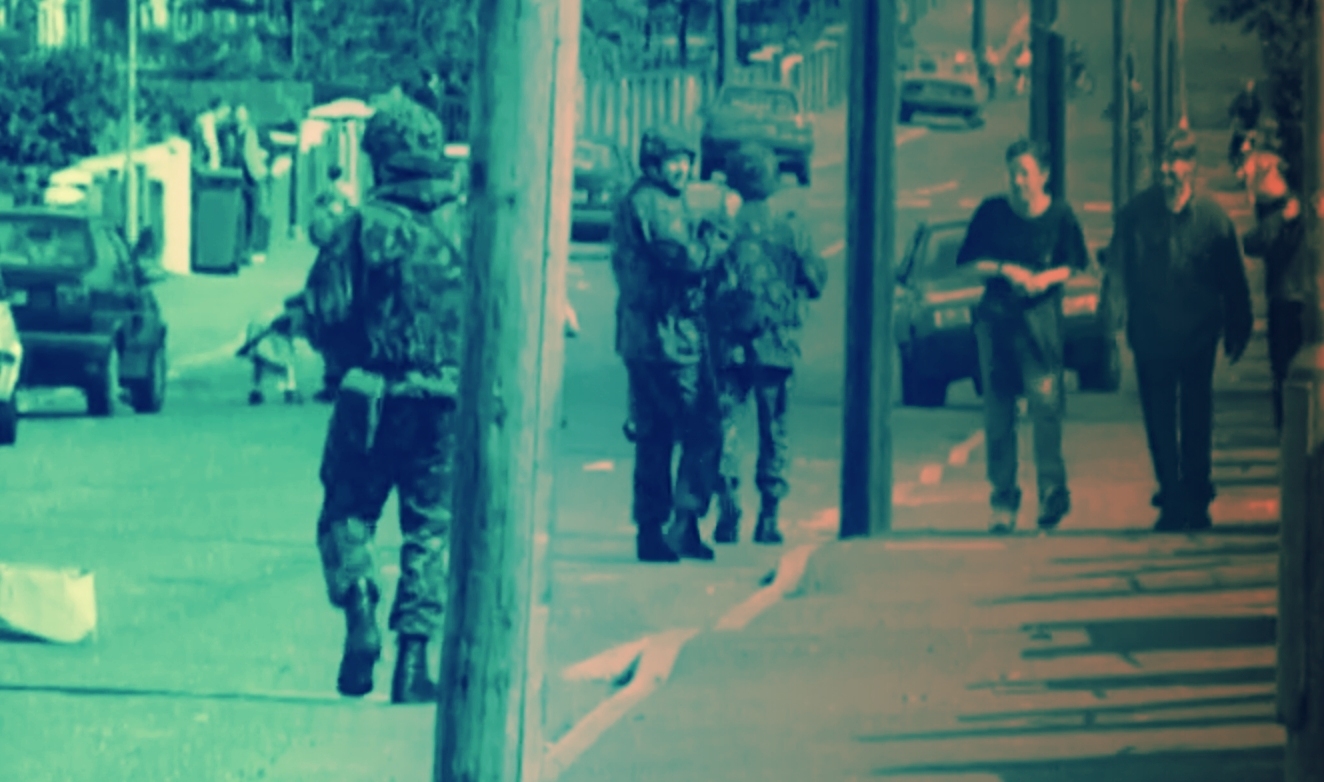 But then, as the closest I’ve come to the Troubles is chatting with a British Army veteran who was mortared during his stint there, perhaps I’m not really qualified to pontificate on the question “Is the NI conflict a suitable theme for a wargame?”. I suspect there are a few people reading this with stronger connections. If you grew up in streets frequented by Pigs and petrol bombers, or patrolled them in a British Army uniform, I’d be particularly interested to hear your views on this emotive subject. 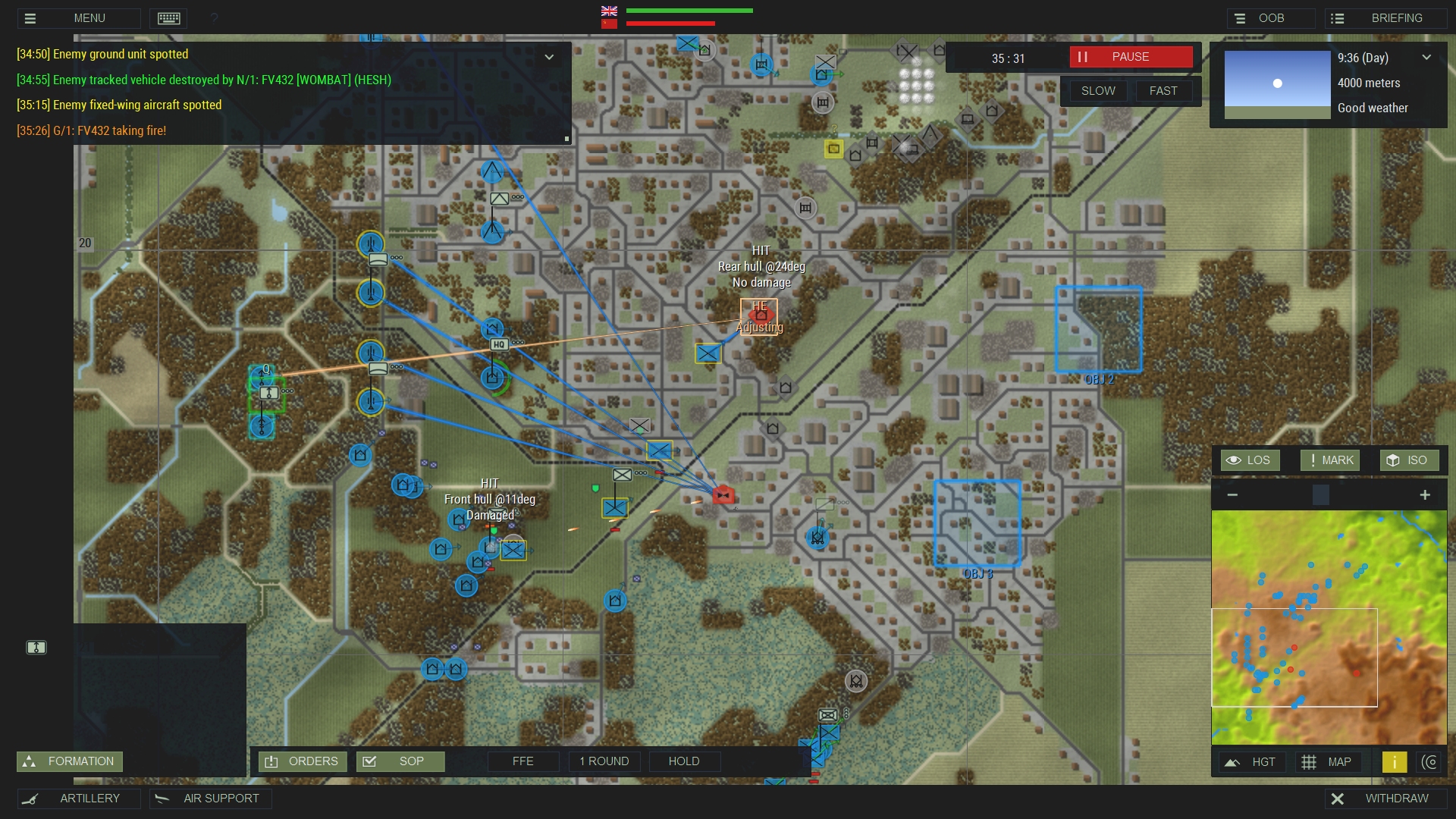 My year-old two–part Armored Brigade review is little out-of-date now. Since it was penned, Veitikka Studio have strengthened their top-down Close Combat-reminiscent Cold War wargame with a likeable dynamic campaign system, a host of engine improvements, and an add-on containing two payware factions, Italy and Yugoslavia. A strong turnless tactics title has quietly morphed into an offering with the accessibility of CC, the plausibility of Combat Mission, and the campaign freedom of Graviteam Tactics. 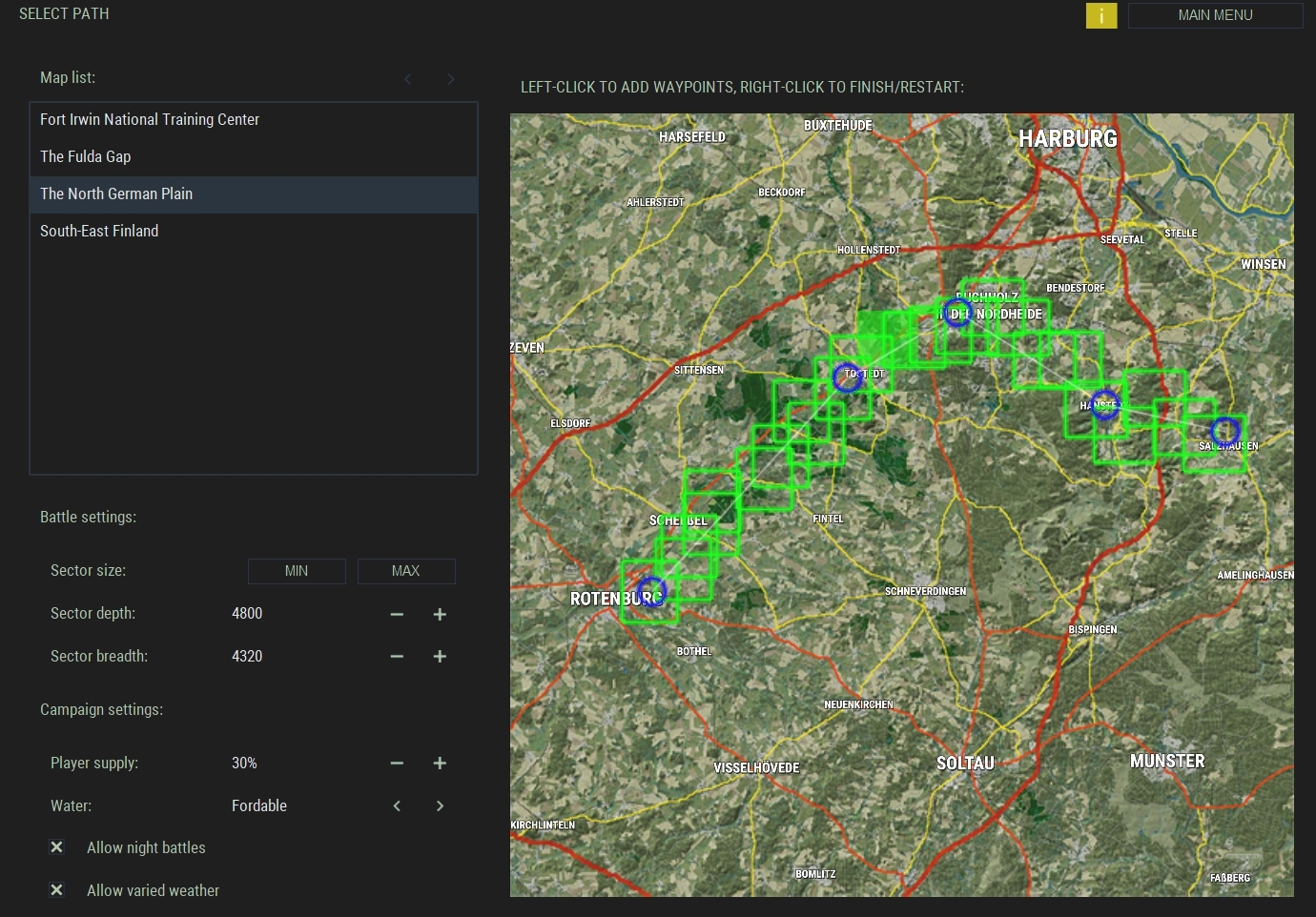 Juha’s approach to the long game reminds me a bit of Atomic’s in Close Combat 2: A Bridge Too Far, the key difference being in AB the player decides how long the mission sequence is and what battlefields it will incorporate. You begin by clicking your way across one of the game’s four huge theatre maps (Fort Irwin, Fulda Gap, North German Plain, South-East Finland). The engine then converts this route into a chain of clash venues. Play begins on the middle link of the chain with a “meeting engagement”. Win and you move one map closer to your objective, the enemy end of the chain. 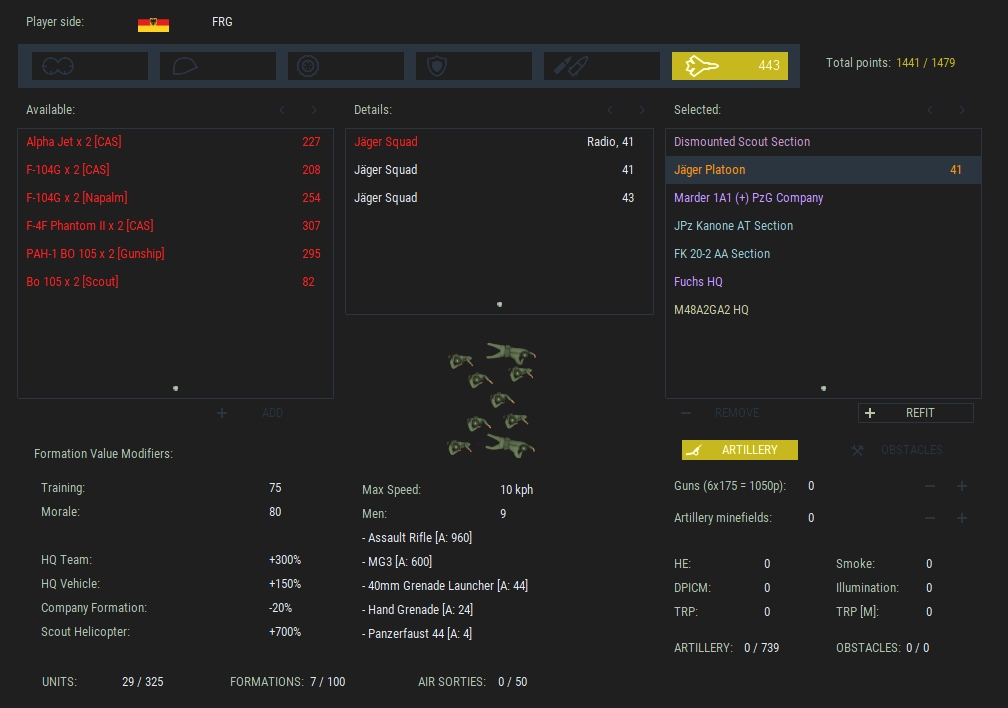 Maintaining forward momentum isn’t easy as, following victories, you’re expected to assault VLs defended by sedentary, hard-to-spot foes – often a tough proposition. And the closer you get to that map at the far end of the chain, the fewer “supply points” you get to spend on refitting your battered core force between battles.

It’s an ingenious, semi-self-balancing mechanism (defeats push you back towards your end of the chain and shorten your supply lines) enhanced by the way constituent maps suffer persistent damage. A venue fought over multiple times sports the bruises of earlier combats – rubbled buildings, scorched woodland, cratered roads, etc. The fact that maps are randomly culled from larger entities, and AB’s unscripted AI is driven entirely by VL position and force composition, guarantees an endless succession of unique, unpredictable engagements. 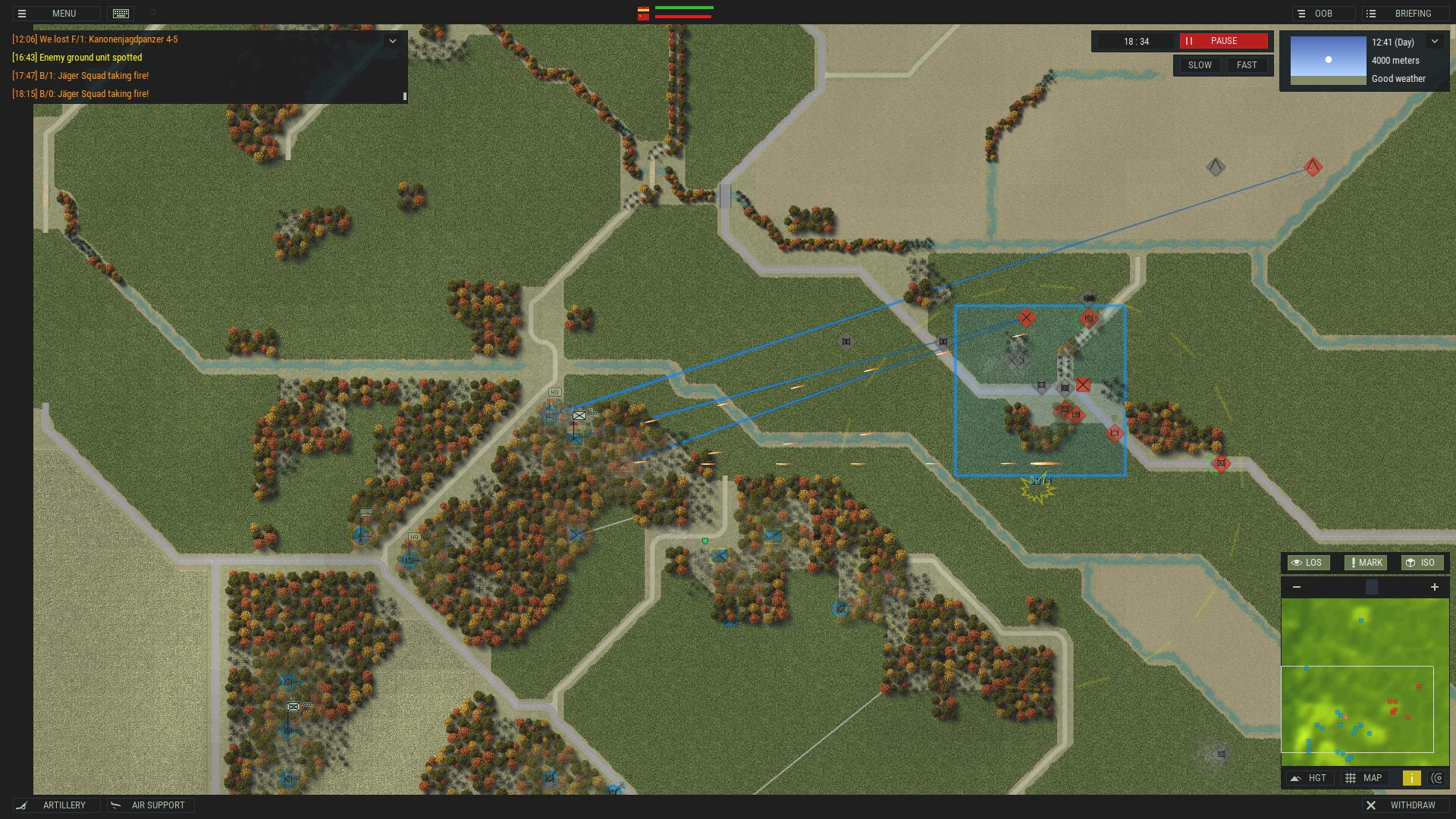 As reported last week, the latest beta patch increases the game’s map cell capacity from one to three units, an improvement that aids pathfinding and boosts naturalism considerably. On the attack the AI can still seem a tad over-eager and uncoordinated at times but that slight clumsiness is balanced by a talent for defence and a plethora of customisation options that, when used cleverly, hide behavioural deficiencies pretty well. 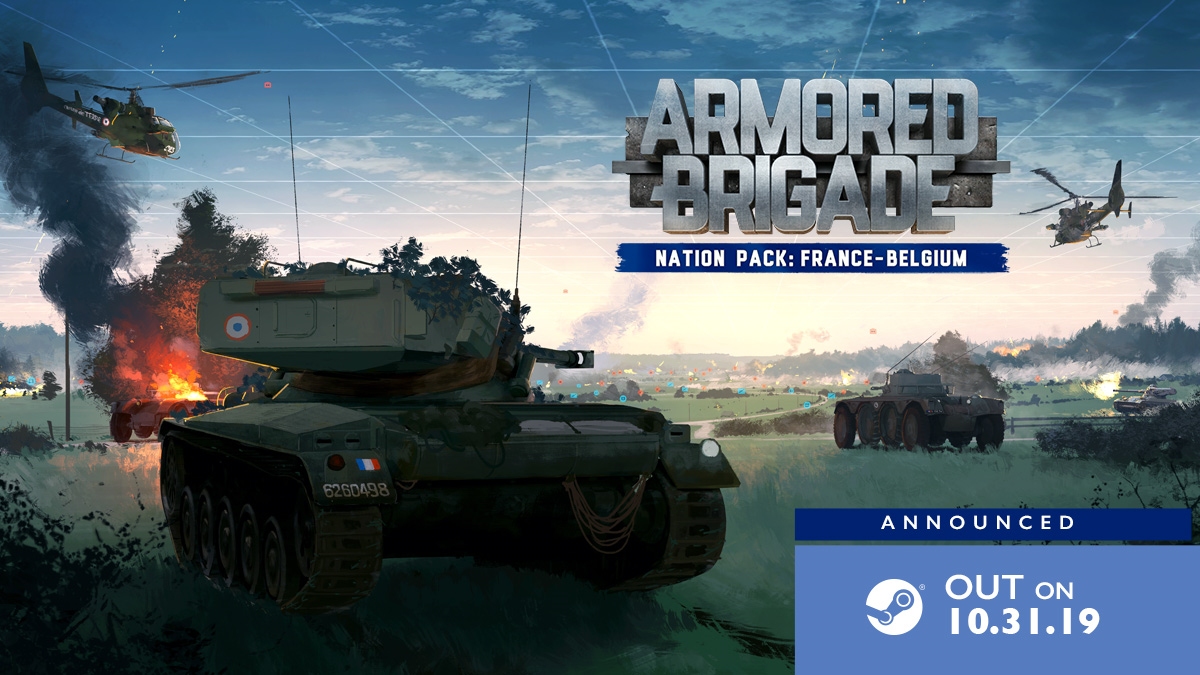 The next step for AB is a deserved Steam debut. That will happen on October 31 and coincide with the release of a second expansion pack. Period (1965-91) French and Belgian armies are soon to join the default Soviet, US, British, Finnish, East German, West German and Polish ones. With the new unit selections will come a tract of Western Europe more associated with Shermans and Panthers than the angry abodes of the Cold War. 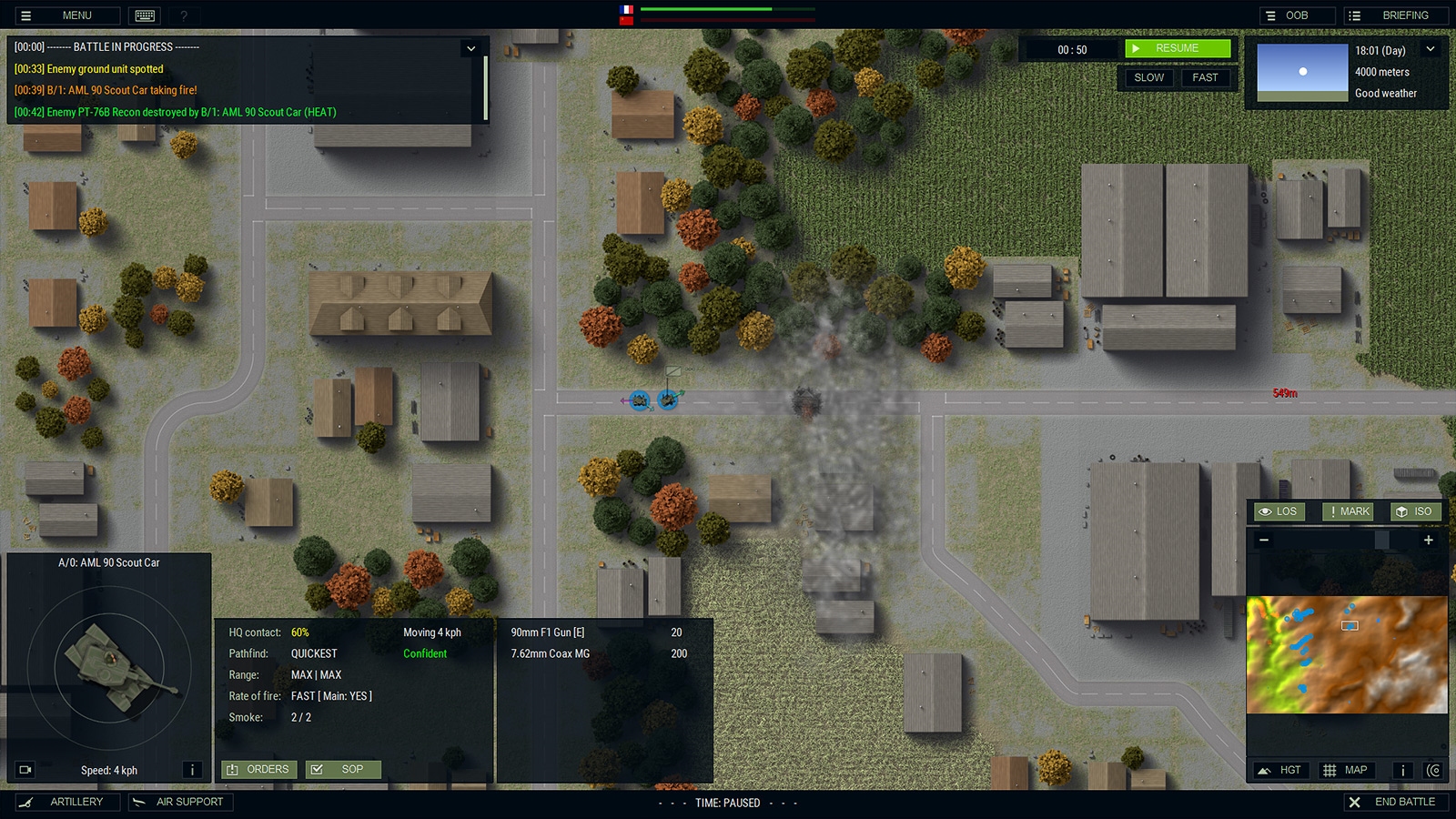 Flare Path’s birthday seems to have slipped past unmarked this year. Consider the following modest competition, an apology. Matrix Games have kindly given me two codes for the excellent Armored Brigade (the codes, redeemable at www.matrixgames.com, include the Italy-Yugoslavia pack). You can win one by sending me (timfstone at gmail dot com) the names of at least six of the units depicted below by Sunday, 1200 hrs GMT. Name all eight war machines correctly, and your name will go into the hat twice for Monday’s draw. The usual rules apply (NO ANSWERS IN THE COMMENTS! No sly multiple entries! All entries must be submitted in the next 48 hours.). Answers don’t have to be too specific. Roman isn’t interested in mark numbers or variant letters. 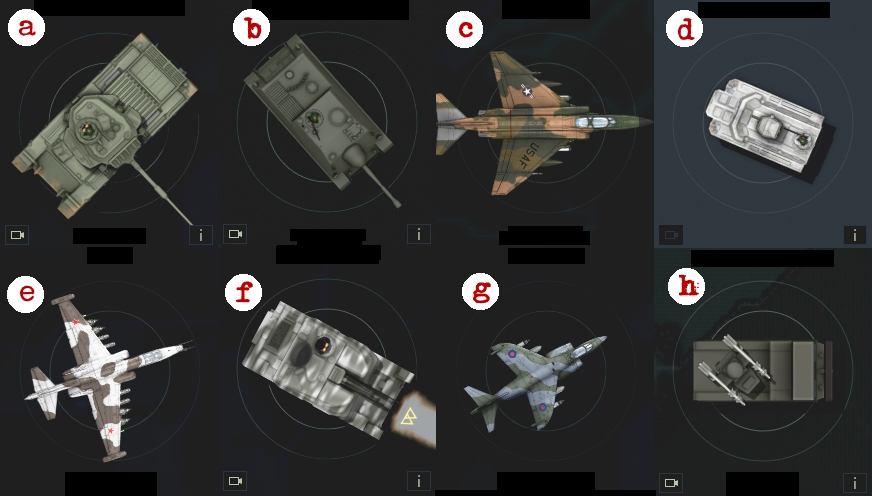 Tagged with Armored Brigade, competition, The Flare Path, The Troubles.