Nvidia’s G-Sync Ultimate monitors may be some of the best gaming monitors I’ve ever laid eyes on, but good gravy do they cost an arm and a leg, with both Acer’s Predator X27 and Asus’ ROG Swift PG27UQ still going for around two grand a pop. The Acer Nitro XV273K might just be the next best thing, though. It’s not a G-Sync Ultimate screen, but this 27in, 4K, 144Hz, FreeSync monitor with DisplayHDR 400 support is one of the select few that’s one of Nvidia’s officially certified G-Sync Compatible monitors, meaning Nvidia graphics card owners can still take advantage of its variable refresh rate tech for super smooth, tear-free gaming. Sure, no graphics card on the planet is capable of hitting 144fps on max settings at 4K right now, but by golly if it isn’t one of the most gorgeous gaming monitors I’ve ever clapped eyes on.

It still costs at least half an arm and a leg, with current prices sitting around £795 / $900, but when the Nitro XV273K is this lovely, it’s definitely a lot easier to justify to yourself than plonking down two grand on something that, for all intents and purposes, looks pretty much identical during everyday use.

Straight off the bat, my X-Rite Display i1 Pro colour calibrator showed its IPS panel was displaying a pitch perfect 100% of the standard sRGB colour gamut on its default User profile and warm colour temperature mode, and an impressive 92.4% of the HDR-grade DCI-P3 colour gamut as well. That puts it pretty much neck and neck with the Acer Predator X27 and actually a smidge ahead of the Asus PG27UQ’s DCI-P3 coverage, which just goes to show you don’t need to spend a crazy amount of money on an Nvidia G-Sync Ultimate display just to get a super accurate gaming screen. 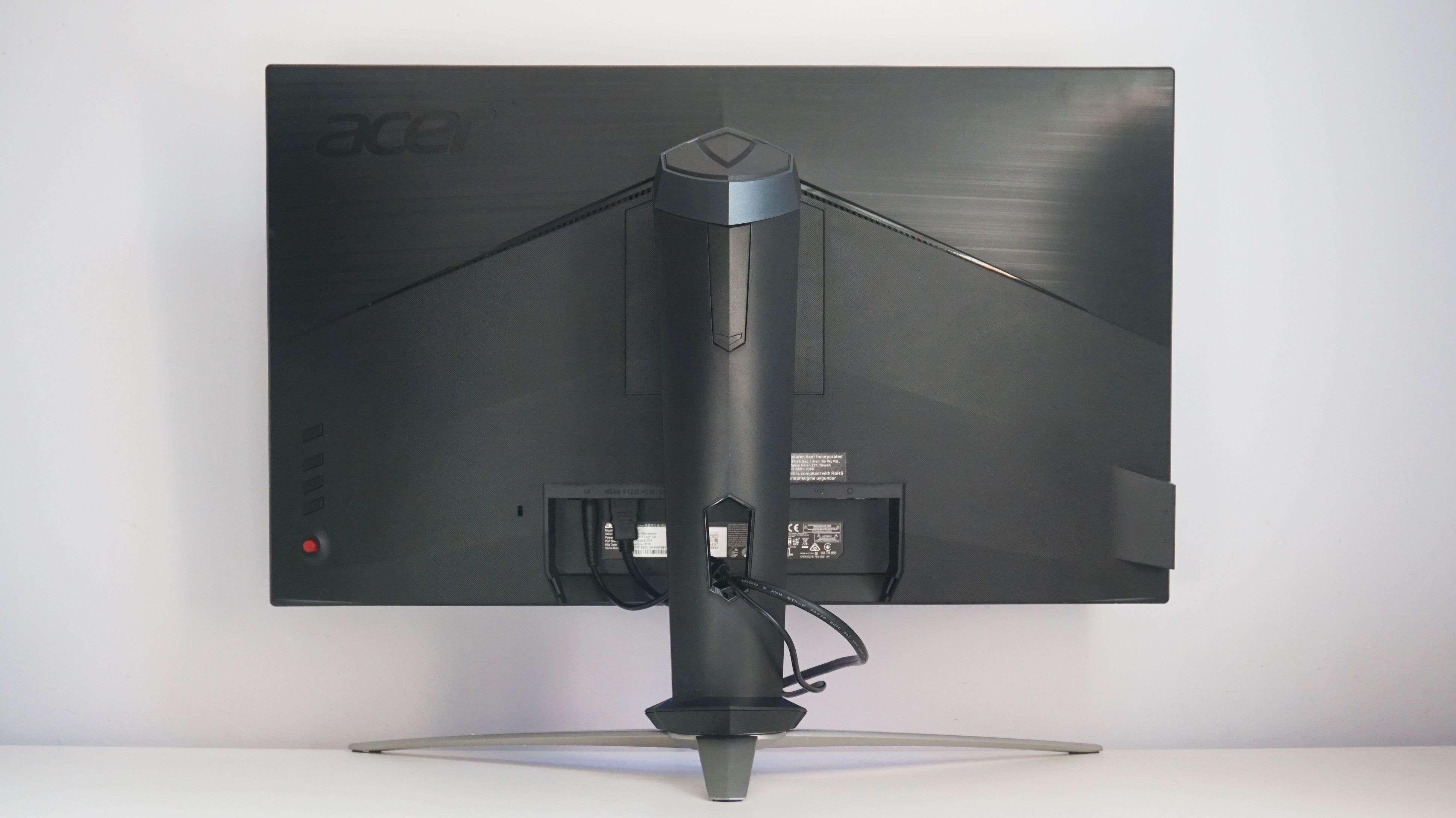 The main difference, of course, is that the Nvidia G-Sync Ultimate monitors have ludicrous HDR capabilities. Both of them can hit a eye-searing 1000cd/m2, for example, and have hundreds of individual backlights to facilitate it, too. The Acer Nitro XV273K, on the other hand, is a lot more modest in its HDR aspirations, as this one’s only certified to meet VESA’s entry-level HDR standard, DisplayHDR 400.

In truth, I was surprised when I saw this, as other DisplayHDR 400 monitors I’ve tested have all been a bit underwhelming in the colour accuracy department – mostly because the DisplayHDR 400 spec doesn’t actually require a screen to meet any kind of DCI-P3 figure whatsoever. Indeed, with the Acer Nitro XV273K able to reach a peak brightness of around 520cd/m2 according to my colour calibrator, I wondered why it wasn’t good enough to meet VESA’s next HDR spec, DisplayHDR 500.

I suspect it’s probably because of the monitor’s black levels, which came in at a rather high 0.49cd/m2 on maximum brightness (the closer to 0.00cd/m2, the better). DisplayHDR 500, you see, requires a maximum black level of just 0.10cd/m2, which is probably why it doesn’t meet AMD’s FreeSync 2 HDR standard either. I say probably, because AMD still haven’t disclosed what their FreeSync 2 spec actually entails yet, but when everything else seems to be in tip-top shape, it seems likely that the XV273K’s black level is to blame here. 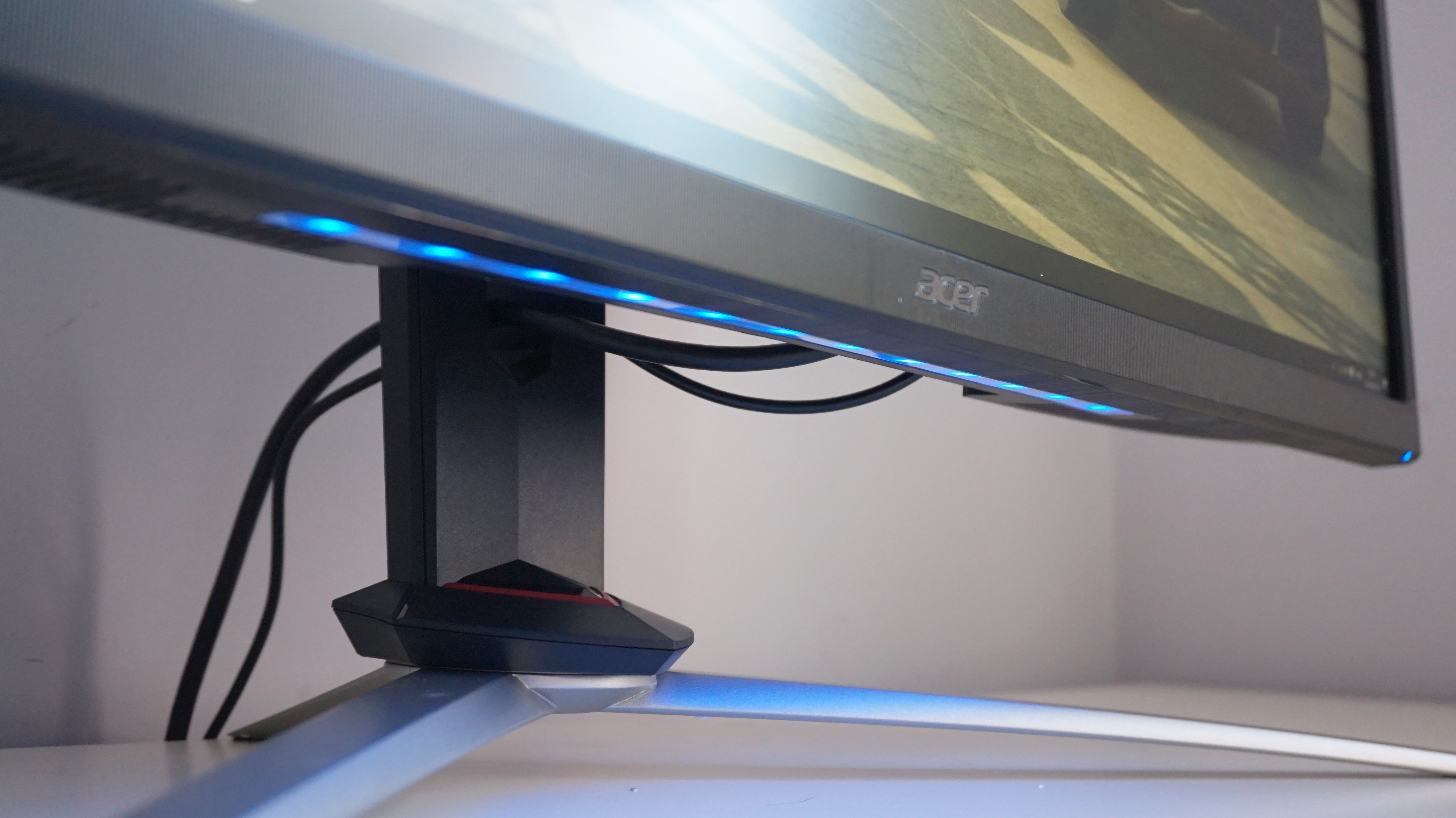 If you’re not a fan of the Nitro XV273K’s LED strip, you can turn it off in the monitor’s onboard menu system.

In practice, though, I didn’t really have much of an issue with it. To my eyes, my darker test images still looked deep and inky onscreen, and thanks to its good contrast ratio of 1042:1, there was plenty of shadow detail to be seen as well. Besides, no one needs to have their monitor blaring away at a peak brightness of 520cd/m2 all day. If anything, you’ll give yourself a headache looking at something that bright for long stretches of time (I know I did), and once I turned the brightness down to around 200cd/m2 (around 20 on the XV273K’s brightness scale), the black level dropped to a much more acceptable 0.20cd/m2.

As for the Nitro XV273K’s actual performance as an HDR monitor, it’s… fine. Much like the Asus ROG Strix XG32VQR I tested recently, it’s still a pain in the ass to get working (mostly because of ongoing compatibility issues with Windows 10, but also because the XV273K’s myriad of colour modes and HDR colour options mean it doesn’t necessarily kick in automatically all the time unless you’ve enabled the correct half dozen options in the monitor’s onboard menu system), but once you finally wrangle it into submission it looks very pleasant. 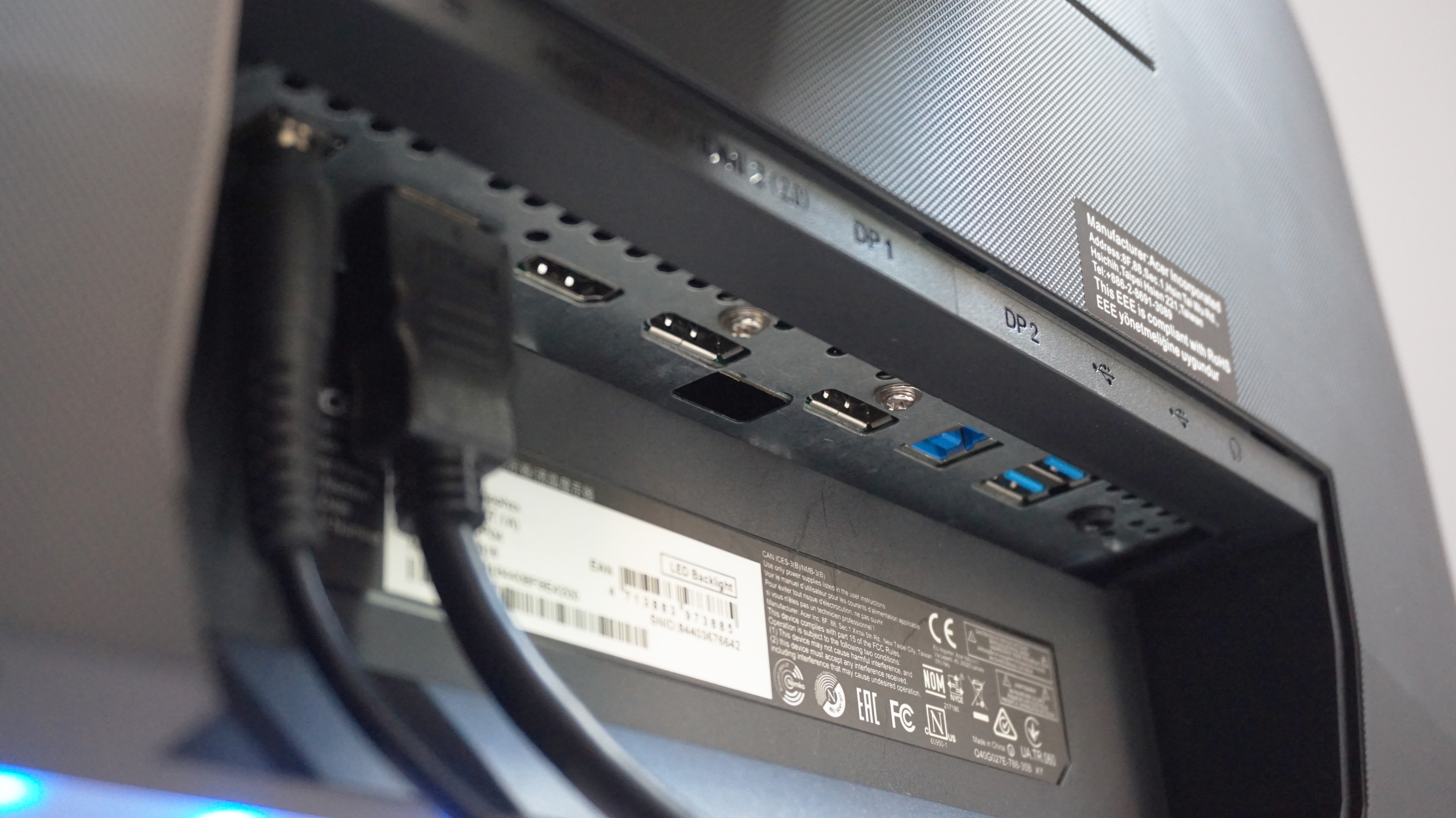 The Nitro XV273K comes with plenty of ports, including two HDMI 2.0 inputs, two DisplayPort 1.4 inputs, and four USB3 ports (the other two are on the side).

In this case, though, HDR probably isn’t going to be the main reason you might want to buy this monitor. HDR is a nice extra, sure, but it’s the Nitro XV273K’s outstanding colour accuracy that’s the real draw here, plus that lovely high refresh rate. It’s rare to see a 4K monitor with a high refresh rate of 144Hz (outside of Nvidia’s G-Sync Ultimate displays, anyway), although I should note that it can only reach 144Hz once you’ve overclocked it in the monitor’s onboard menu system. The rest of the time it’s just 120Hz over DisplayPort.

Still, even if you can’t be faffed to poke around the menu screen to push it up to 144Hz, even 120Hz is still pretty damn tasty at this resolution, particularly for regular desktop tasks. In truth, not even the insanely expensive Nvidia GeForce RTX 2080 Ti is capable of hitting that kind of frame rate in games on max settings at 4K, but at least you’ve still got the option of playing at 120Hz or 144Hz at 1440p or 1080p depending on how powerful your graphics card is. 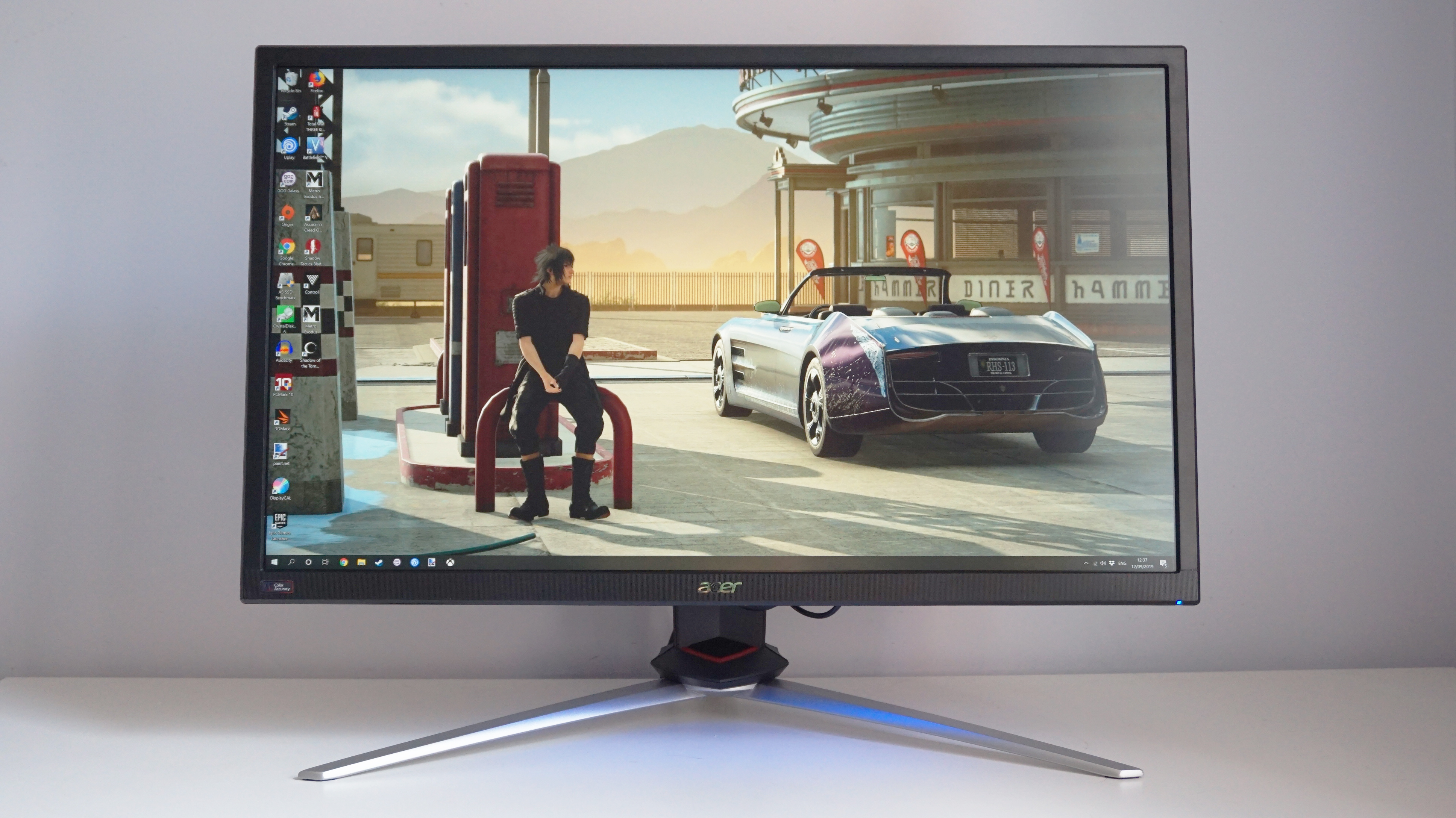 At £795 / $900, it’s still pretty expensive as gaming monitors go, especially when the current mid-range 4K HDR champion on our best gaming monitor list, the Philips 436M6VBPAB, can be had for as little as £580 in the UK right now. Over in the US, it’s still around the $1000 mark (if you can find somewhere that still sells it, that is), but even then you’re getting a whopping 43in, 4K, DisplayHDR 1000 screen for roughly the same amount of money compared to Acer’s tiny 27in job. That won’t be much use if you’re after something that can easily sit on a desk, of course, but it’s worth bearing in mind all the same.

Still, as 27in, 4K, 144Hz monitors go, the Acer Nitro XV273K is definitely one of the best I’ve seen so far, and it’s pretty much the perfect gaming monitor for anyone who’s been hankering after an Nvidia G-Sync Ultimate display but doesn’t want to spend an absolute fortune on it. The XV273K’s colour accuracy is just as good as the Acer Predator X27 and Asus ROG Swift PG27UQ, it’s got exactly the same refresh rate and resolution, and its variable refresh rate tech has the added bonus of being compatible with both AMD and Nvidia graphics cards. The only thing it’s really lacking is that eye-popping HDR. To be honest, though, until HDR stops being a royal pain in the ass, I’m really not that fussed about whether it’s there or not. All I want is a gorgeous looking panel with accurate, vibrant colours, and the XV273K has that in spades.