This is not a review of fantasy RPG Hardland, because I played for a few hours and, as far as I can remember, I only completed one quest. And it is all down to my deeply fallible memory, because the game doesn’t provide any direction to its players, up to and including a log or any kind of notes. Instead, I’m going to try to tell you whether or not that works, which is a big “mmmmmaybe?”

The one quest that I did complete was to help a very conspicuous monk, whose overhead label read “inconspicuous monk,” to destroy an ale shipment coming in on the road. I did this by distracting the merchant, listening to him talk about how tired he was from the journey, as the monk lept from the bushes and took to their giant cask with slapdash sword strokes. The merchant was very upset and I felt genuinely bad. The monk claimed to be preventing the distribution of alcohol, which is against the church’s laws, but I’d been to the church in the next town over and they sell you deeply overpriced booze as long as you take a very brief oath not to drink it. I came away feeling like maybe I had participated on the wrong side.

It’s a very simple quest, even without a marker telling you exactly what to do, but it layers the world’s characters, stories, and comedy. It’s good. Would it have been affected at all by having a traditional set of quest markers? That’s more complicated.

The quests are not subtle. My notes say things like “bring this guy four ales,” or “find a pink birthday cake.” I didn’t have to think hard about what the game was asking me to do, and the log still exists, just in my mind and my notebook rather than on-screen. For some people that note-taking will be fun, but for me it feels a lot like an extra level of busywork. It also means that you have to provide your own sense of satisfaction at crossing something off, rather than the dopamine hit of QUEST COMPLETED flashing across your screen. And god forbid you experience choice paralysis.

I think that most games probably have very similar, spelled-out quest formats for a good reason. But I also know there is a demand for games that “don’t hold your hand” and putting aside the often condescending way that phrase is applied, it does play well in Hardland. The world is deeply weird, and having only a fragmentary view of it without anyone but yourself telling you what to look into is compelling. So here are some of those fragments. 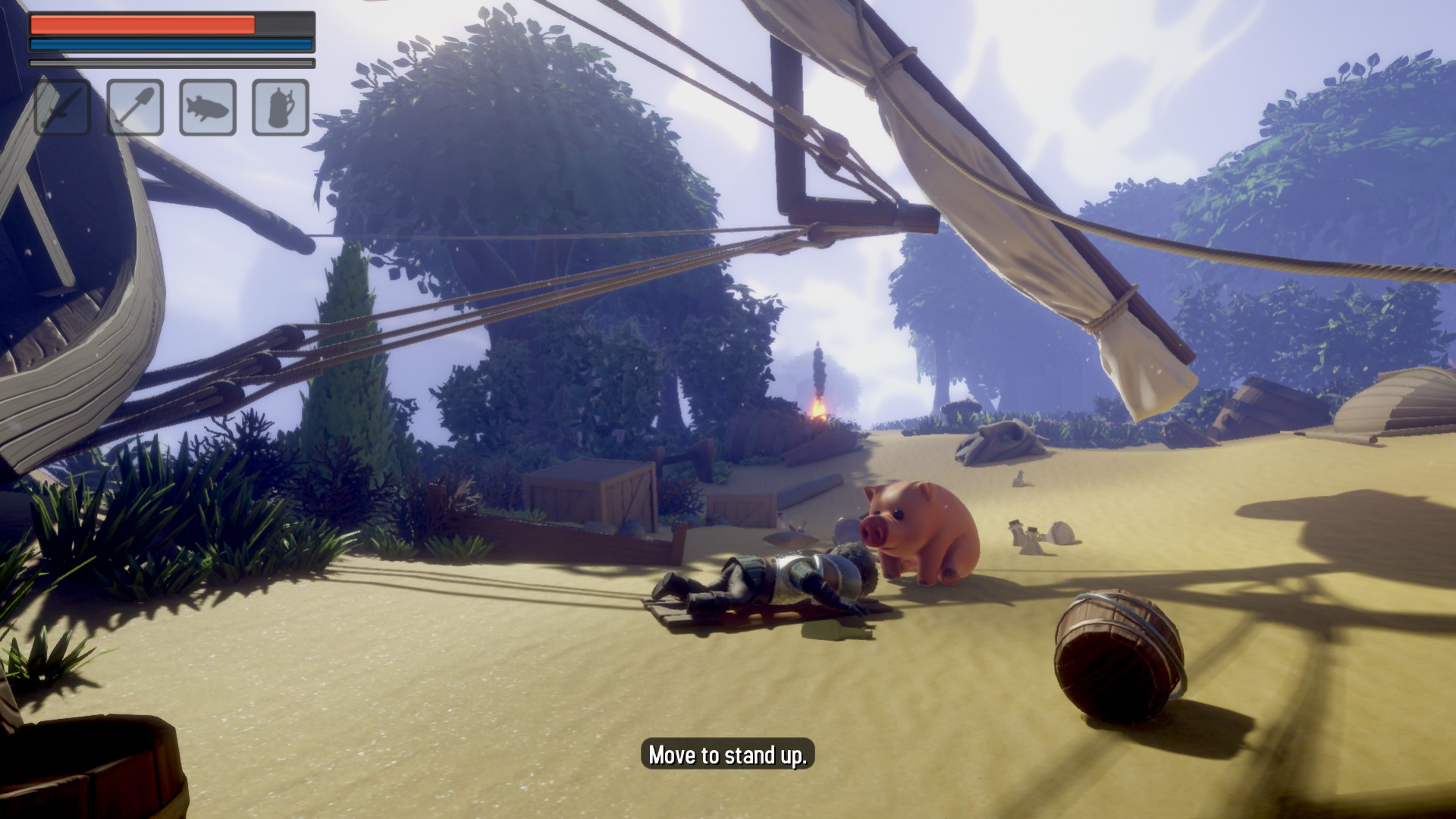 You wake up after a shipwreck to see two things: a pig and a bonfire in the distance. The bonfire being in sight is a neat touch, showing that the game will give you pointers on where to go if you’re paying attention. And the pig is really very, very cute.

Bonfires are where you save, and also where you dream, which are little bits of mysterious microfiction that appear as you sleep and may or may not be utterly central to Hardland’s plot. There’s definitely some weird stuff going on with them and a lot of the characters talk about how central they are to society, but they mostly say inscrutable things like: 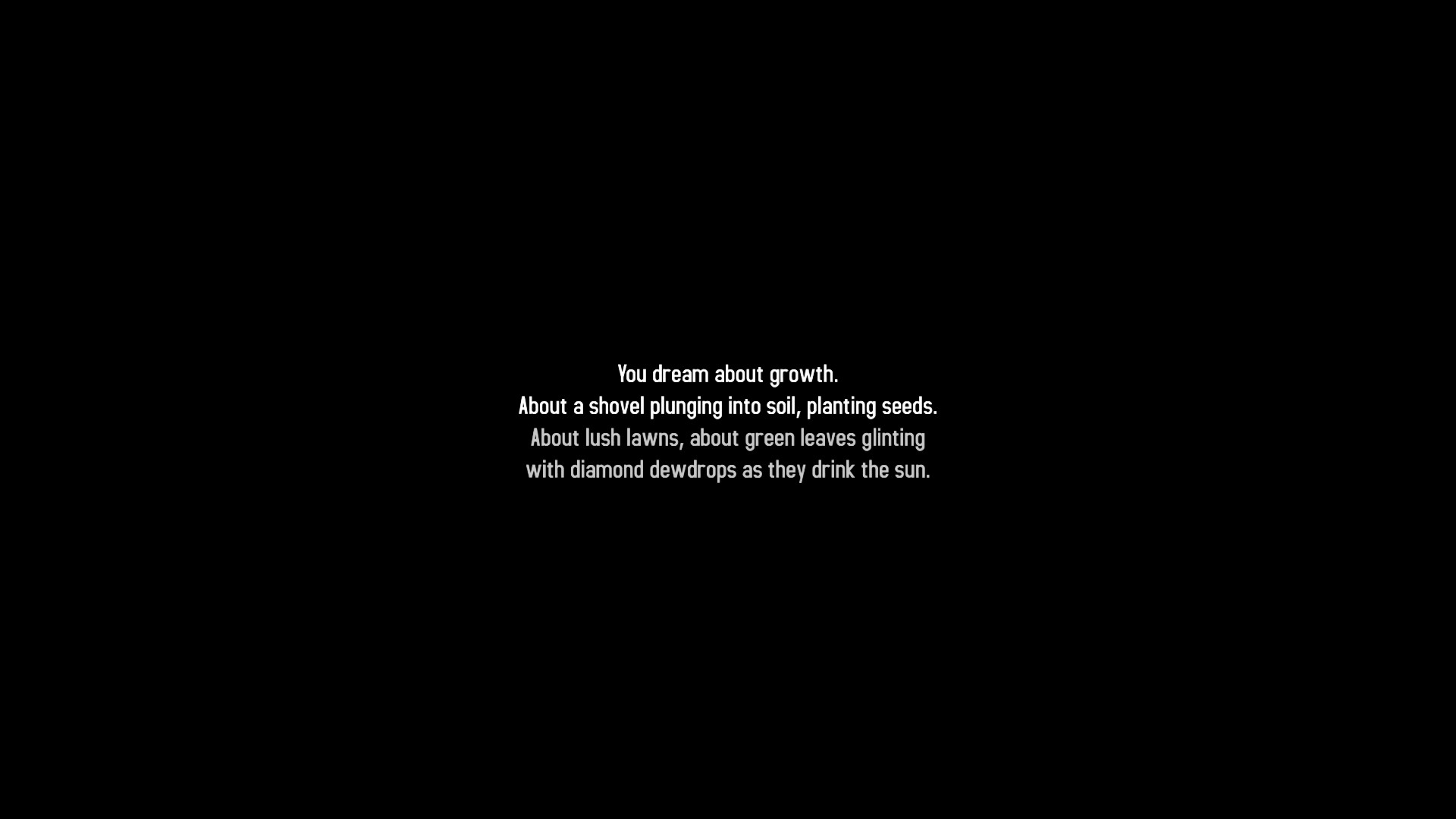 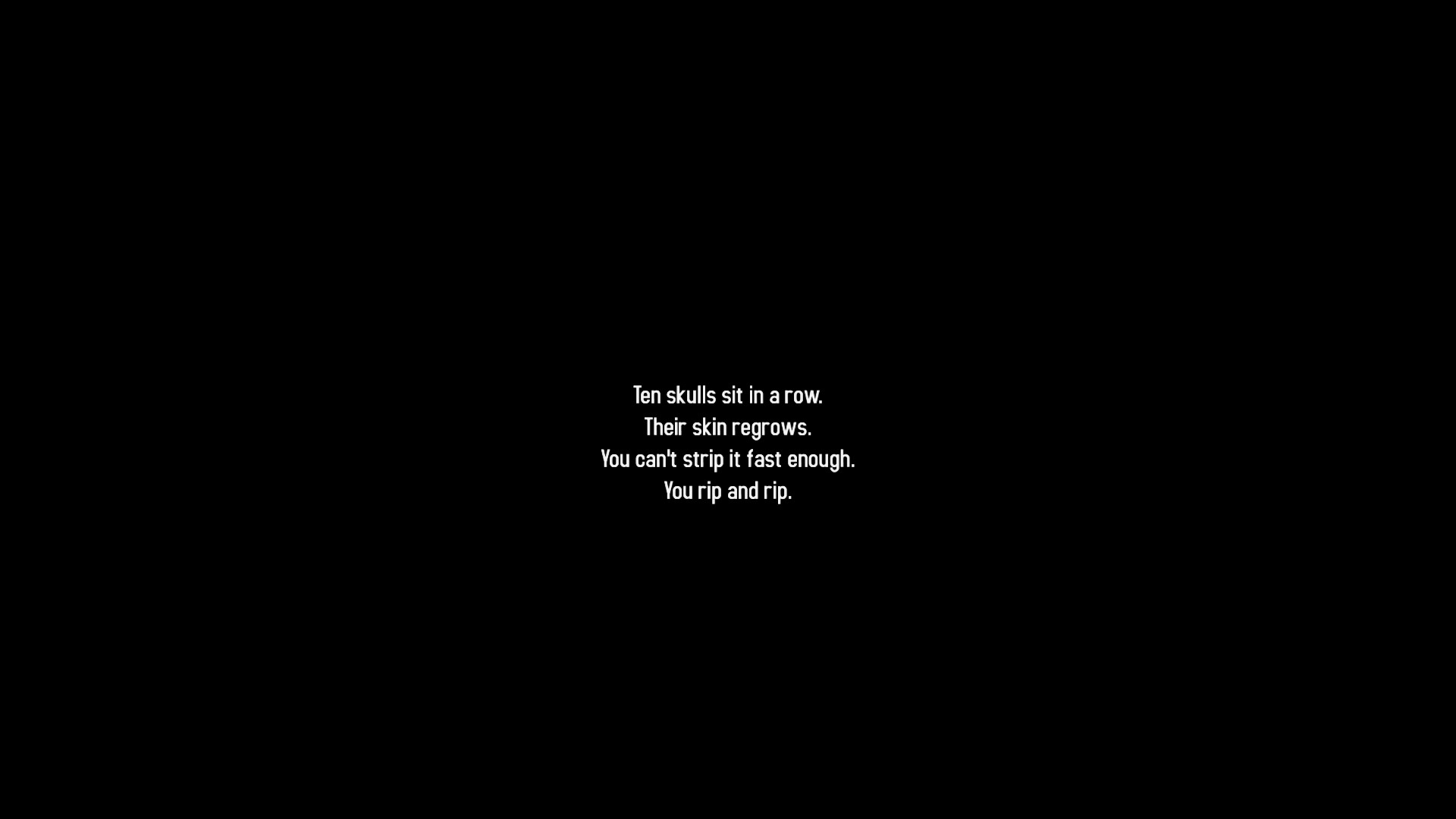 In your inventory is a relic called the King’s Head, with an ominous message about making it whole. This is basically a quest log entry right here, but it may or may not be as foundational to the game as I first assumed because at one point I sold the head to an elephant merchant for coins that I couldn’t even spend. Who knows! 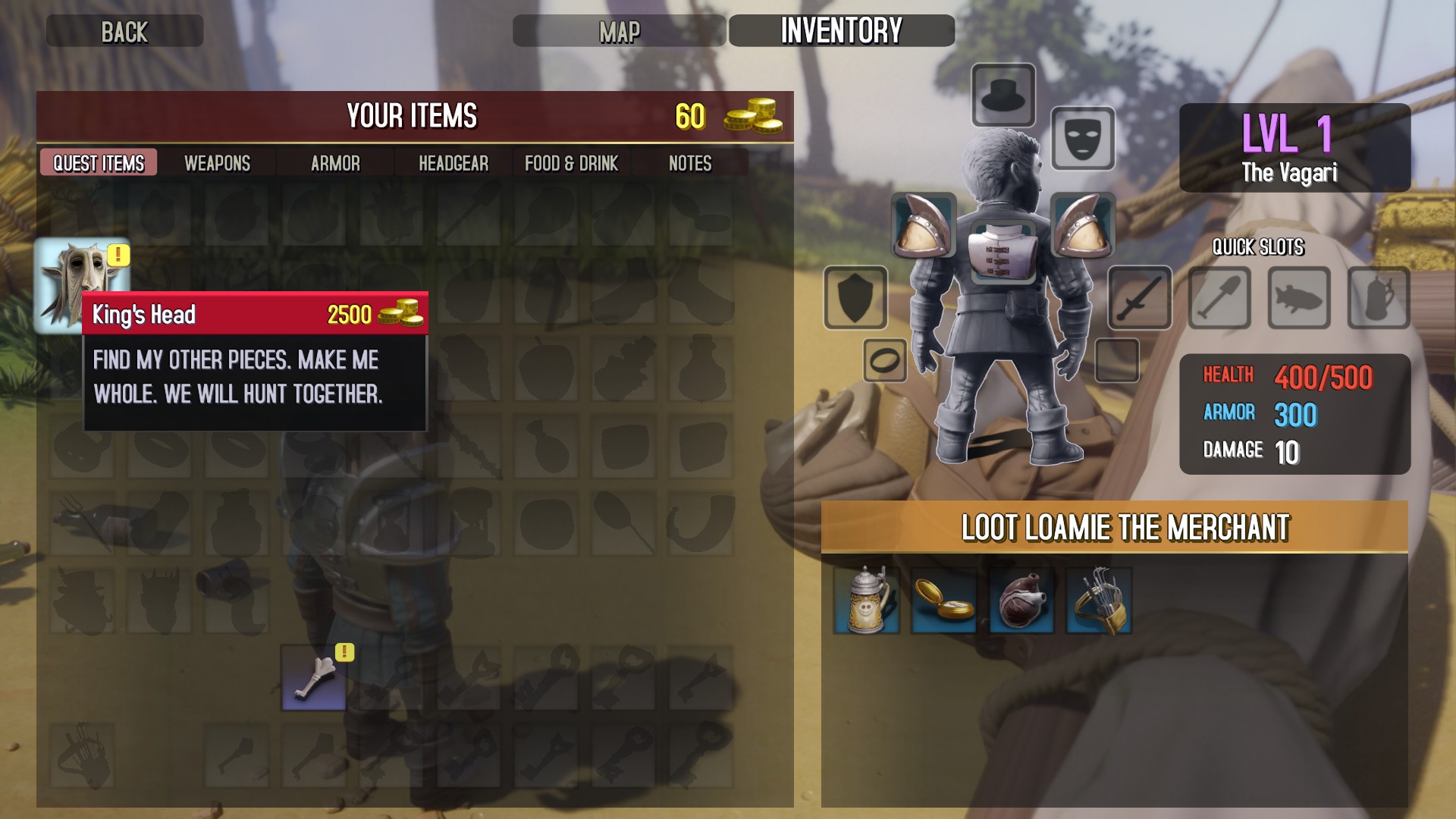 I haven’t even told you about the level up system yet: 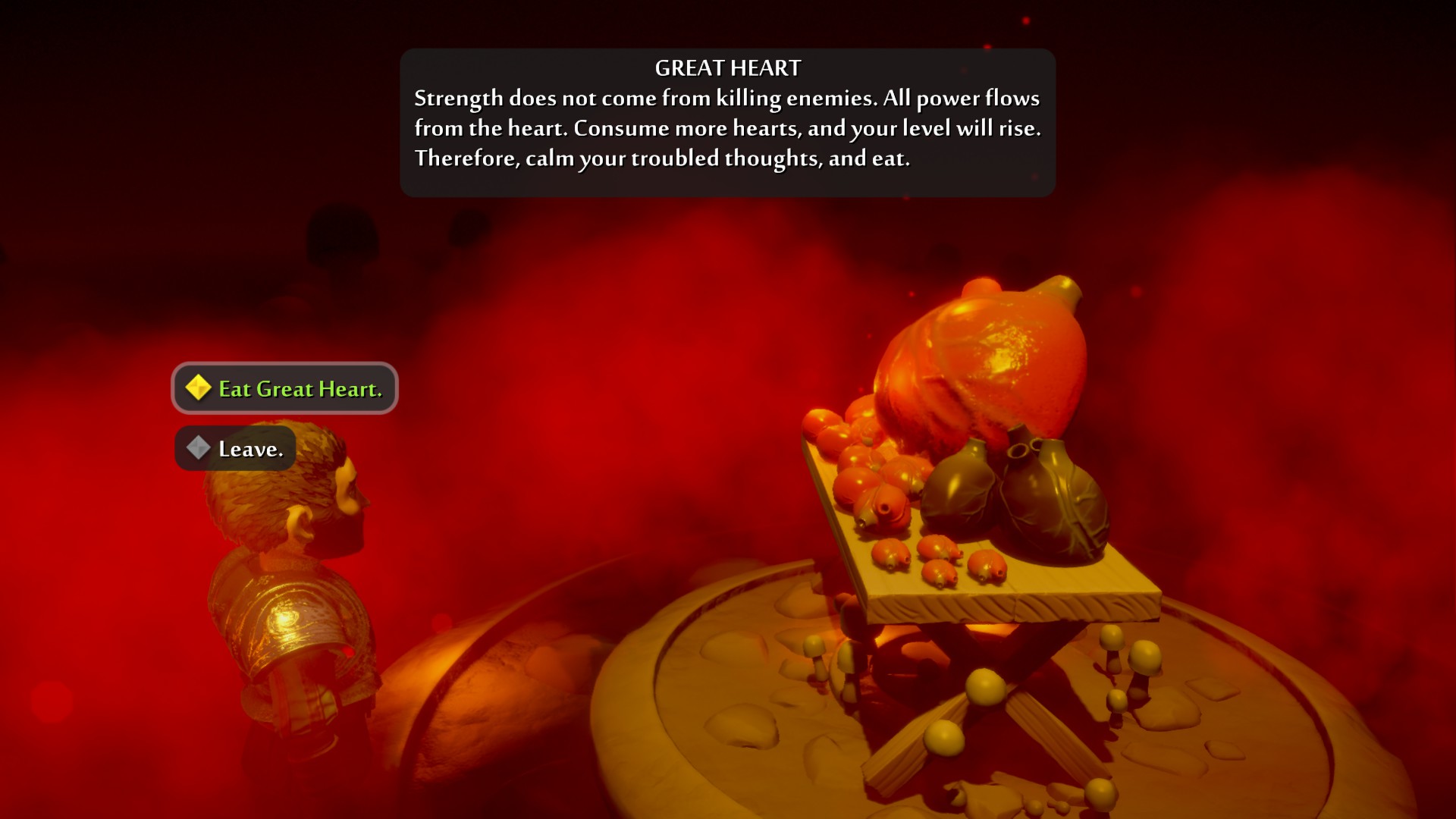 Or the fact that characters just say things like this all the time. 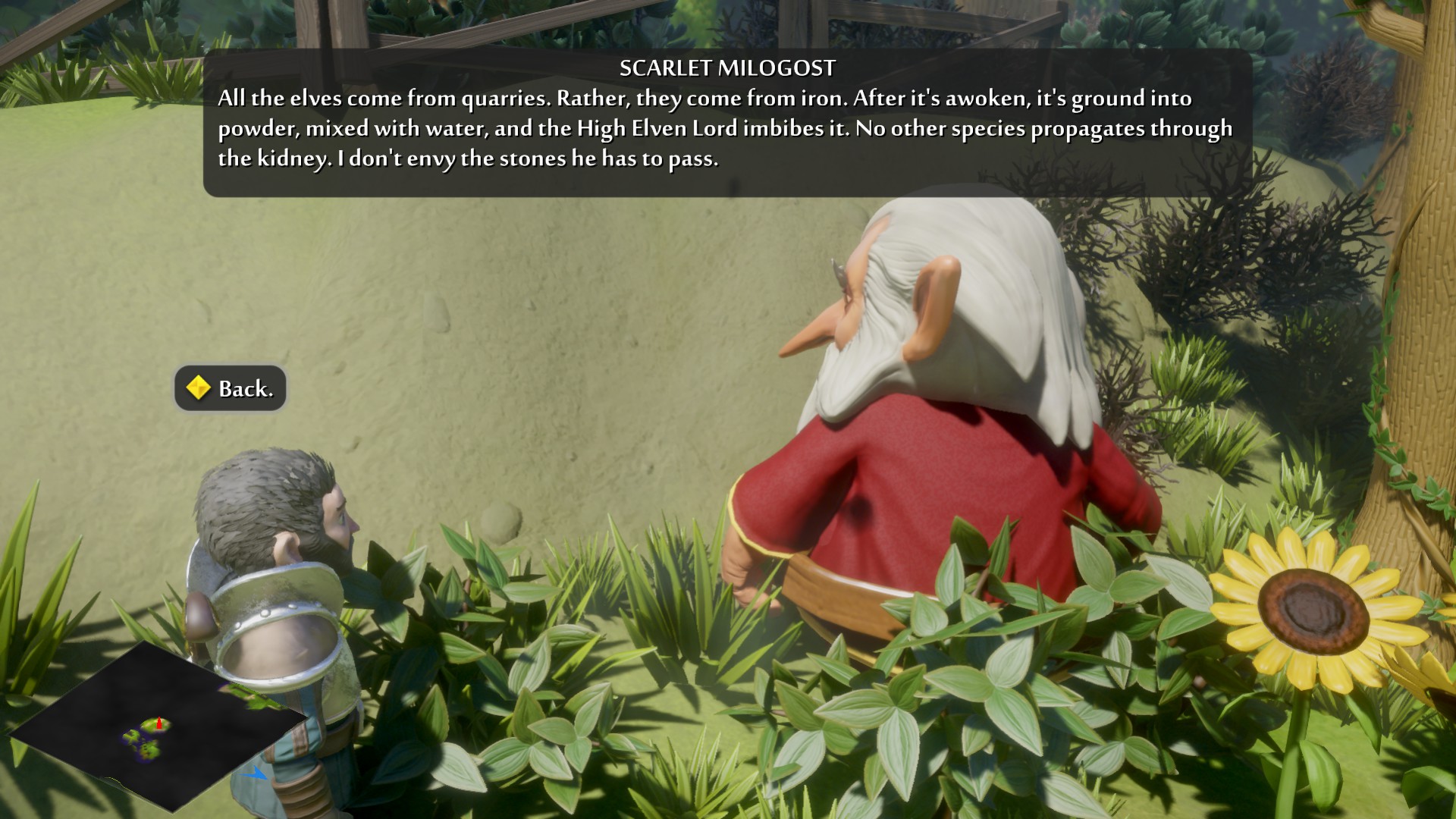 “All the elves come from quarries. Rather, they come from iron. After it’s awoken, it’s ground into powder, mixed with water, and the High Elven Lord imbibes it. No other species propagates through the kidney. I don’t envy the stones he has to pass.”

If you’ve got the time and inclination to explore the world by yourself, there’s a lot of these threads to follow. They are certainly curiosity-inducing. Whether or not they go anywhere I could not even begin to guess.

I’ll finish with one piece of spoiler-free advice for if you’re thinking about playing Hardland: you’re weak. Combat isn’t really the game’s strongpoint; it’s a sort of slash-and-run-about thing that’s best avoided, at least at the beginning. And swimming? That’s a death sentence. Your stamina meter is not good enough to cross that small stretch of water, I promise, and you can’t climb the very small bank on the other side anyway. And, look, it makes sense, your protagonist almost drowned at the beginning of the game. It wouldn’t be very nice if he drowned for real. 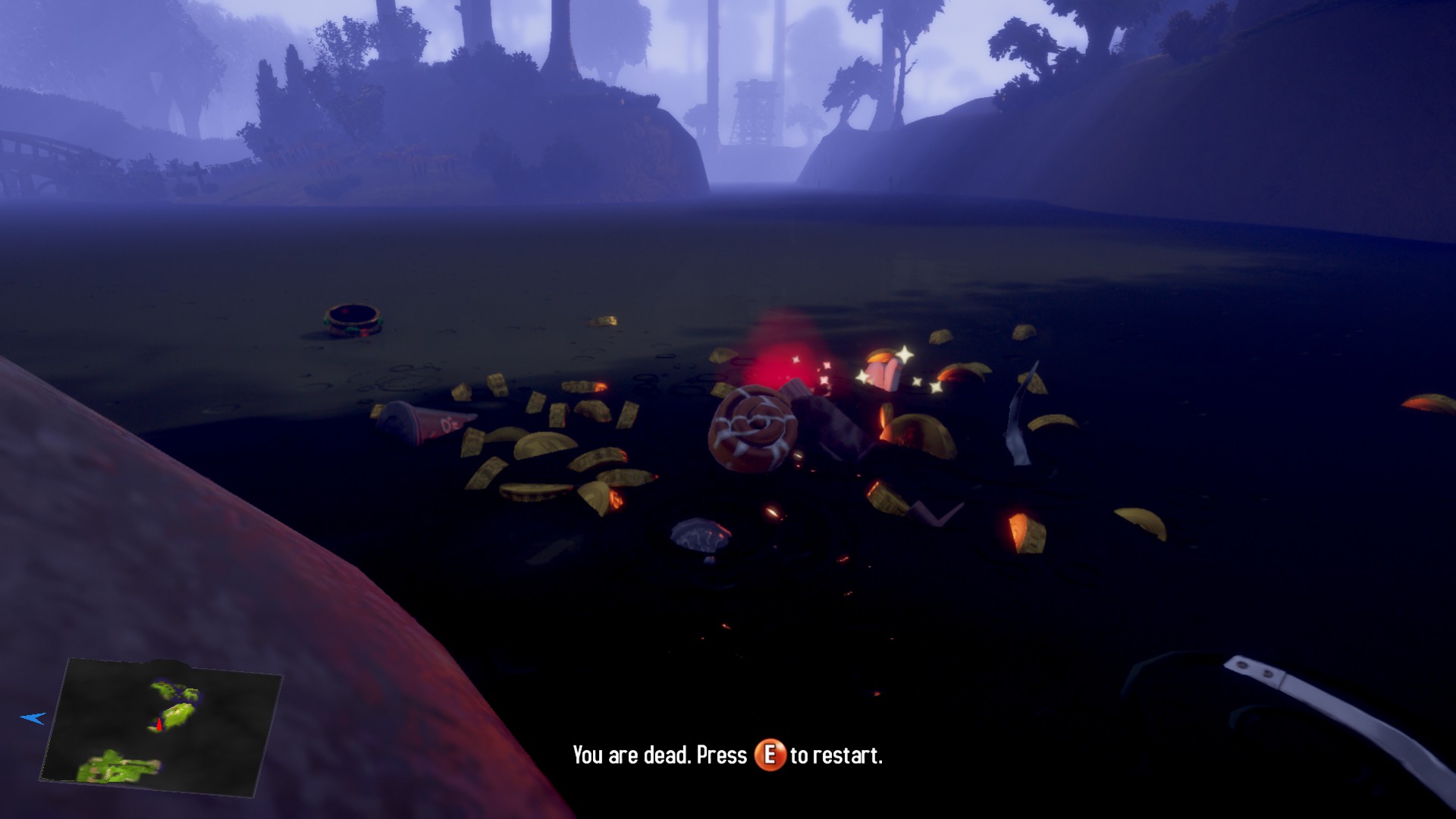