I am still figuring out what I think of Disco Elysium, but I can say with some certainty that it is the first game where I have done a small fistpump and thought to myself, “Yeah, you really nailed telling that woman you found her husband’s body! Nailed it! Best cop ever!”

Disco Elysium is a very dense RPG, where you play an amnesiac alcoholic detective trying to solve a) a murder and b) his identity. As part of the latter quest, the game takes note of your words and actions, and uses them to build an outline of your personality traits. Then it suggests a “copotype” that you roughly adhere to. Until quite recently it suggested I was a “Boring Cop”. I was, as you can imagine, livid at this. 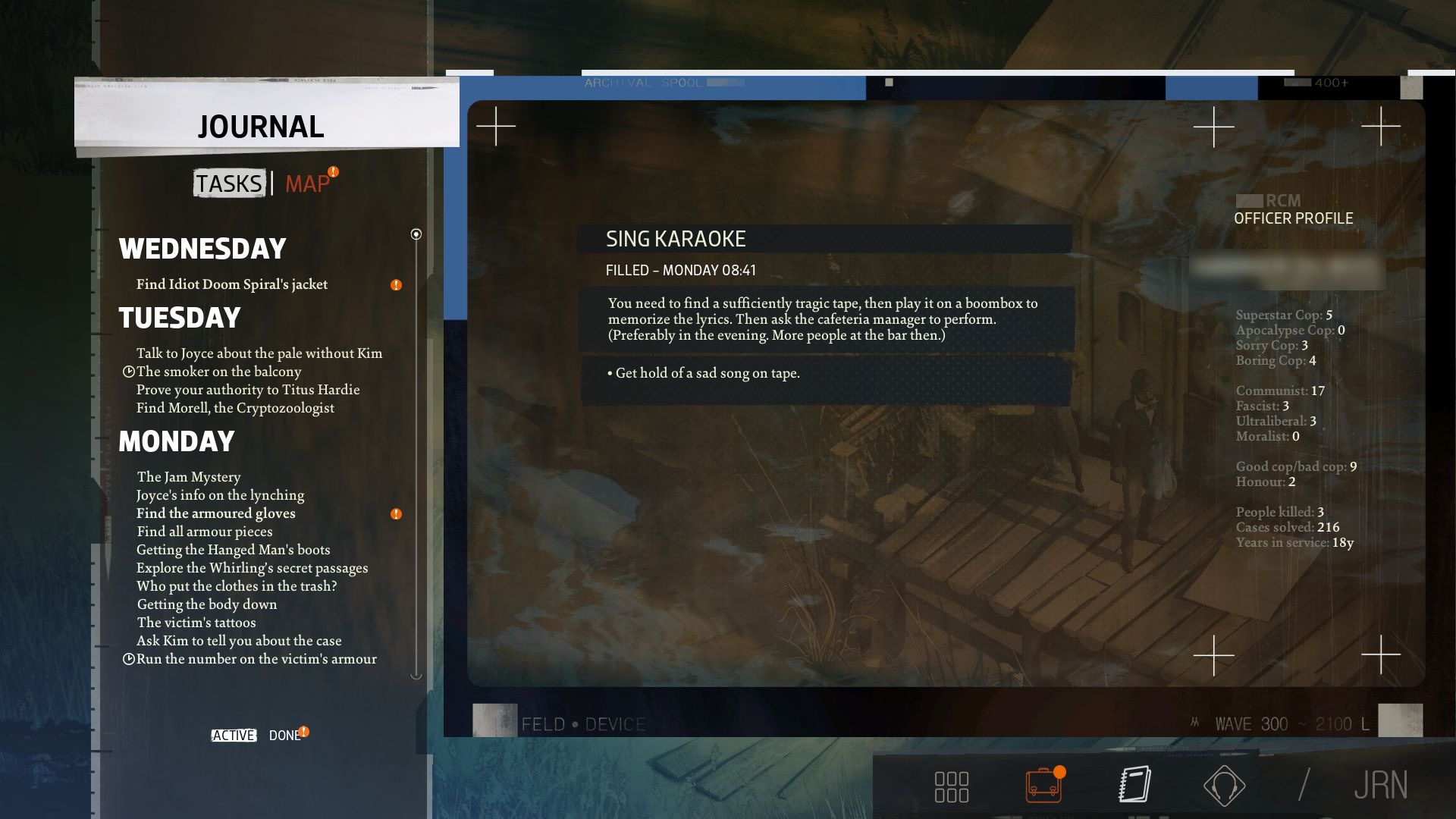 I’ve blurred out the character’s name here, because that is a particularly hard won nugget of information.

But, I had to admit, the game did have a point. Disco Elysium seems desperate for you to take the road less travelled. The loading screens encourage you to try weirder conversational options, because they probably won’t hurt. In other RPGs (that is to say, yer BioWares) I tend to play it quite safe and say what I think people want to hear, because that’s how you get your alliances, companions and quests. Playing to habit therefore in Disco Elysium, I found myself apologising for all the jerk-off things my drunk self had done the night before, and generally being quite nice and polite to people. And to be fair, you know, that’s what you should do!

My cop even runs around with a plastic bag in hand, so he can pick up discarded cans and bottles and recycle them for money. This is both responsible and thrifty. But it is also the action of someone who reuses teabags and irons their pants. The Boring assessment was fair, I suppose, if slightly cruel – and because your copotype is technically suggested by the echoing recesses of your own brain, it was also a bit of a self-burn. 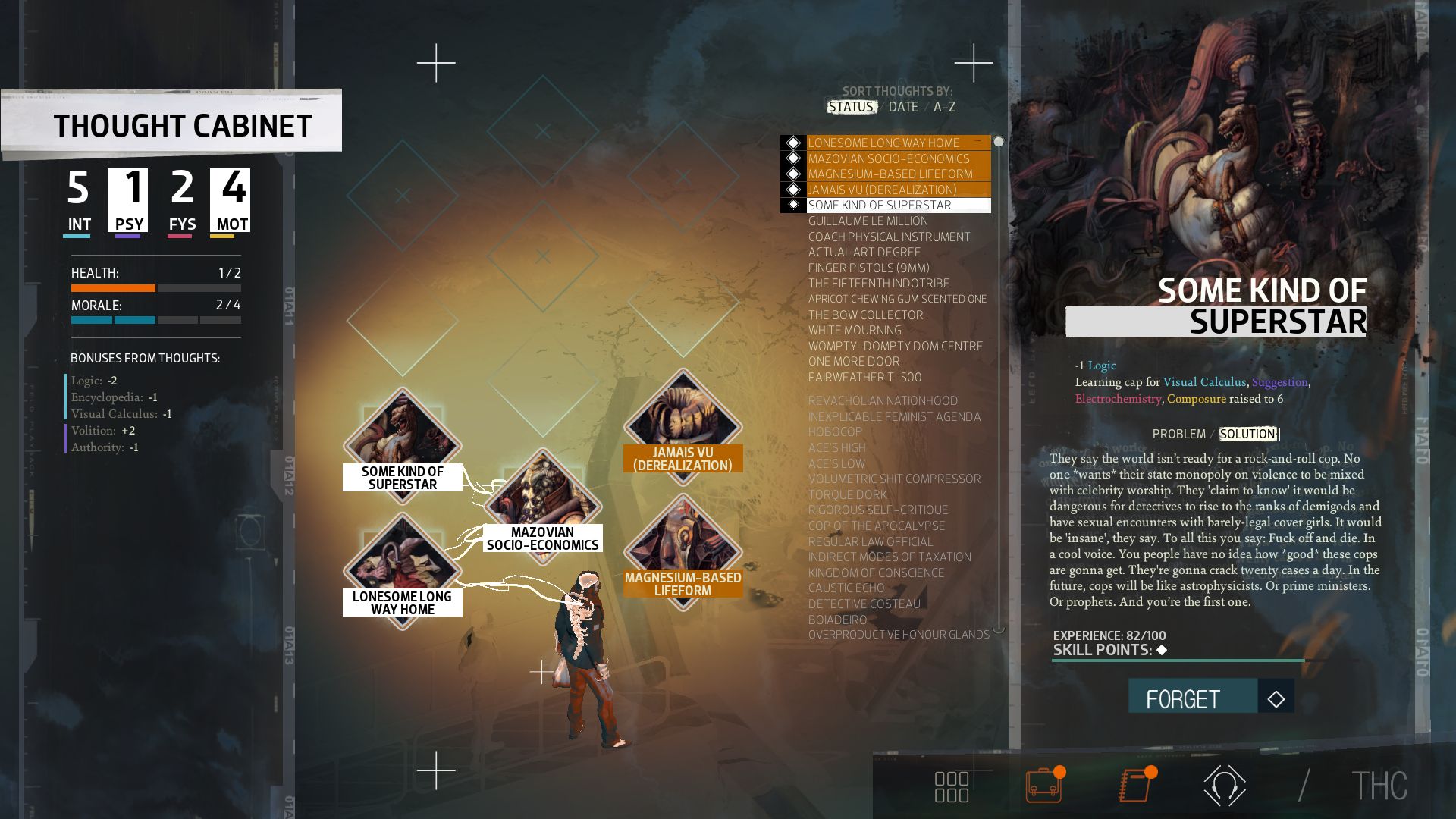 I resolved to change: being boring could not stand. And the game was willing to help. Disco Elysium, after all, offers you a dazzling array of options to say things people won’t like. as a result, I now have a permanent -1 to my social checks with a particular, racist, lorry driver because I told him to fuck off. Literally, it says ‘-1 Fuck off’ when listing the modifiers applying to my conversations with him. Is that boring? I think not.

I began telling people I was a rock star and/or very cool, and picked up the thought Some Kind Of Superstar for my Thought Cabinet. I have now internalised this, to the point where I have permanent bonuses to some skills, but a -1 to my Logic, for obvious reasons. I still carry around the plastic bag at all times, though. But I am a Superstar Cop. Perhaps what happened to me in Disco Elysium is a compressed representation of what happened to the most insufferable people you know in real life. 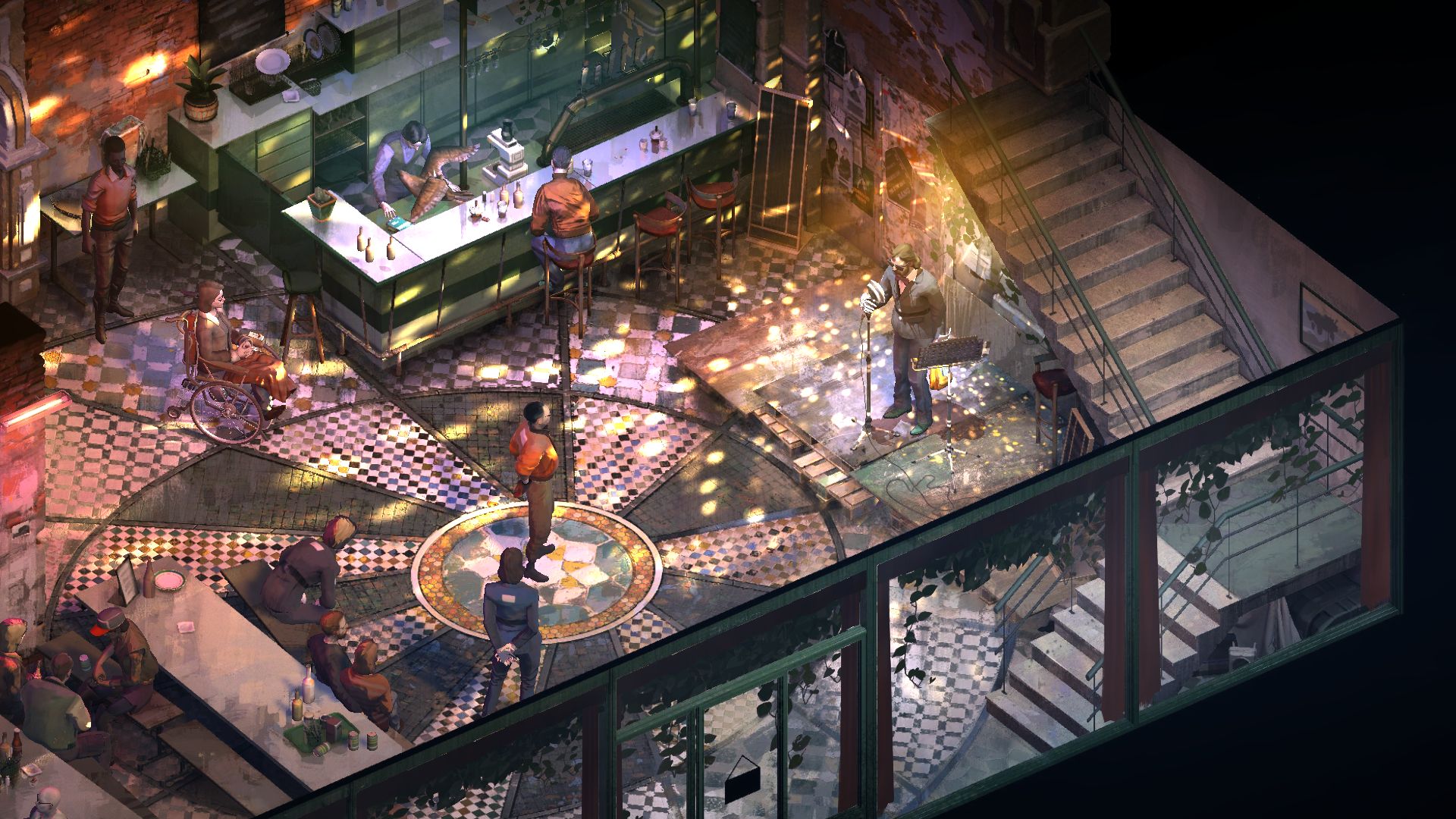 The copotype thing seems to me to be very deliberate, and I have to give a begrudging well done to ZA/UM, there. After all, who wants to be a Sorry Cop or a Boring Cop? A loser, in other words. Plus, I just changed what I was wearing so I’d have a better chance at succeeding at karaoke. Whilst holding a plastic bag. That doesn’t sound like the work of a loser to me. And I totally nailed the karaoke. Best cop ever!