Felix The Reaper is a master of distraction. Instead of making him rush to move shadows about so he can set up elaborately fatal traps, all I want to do is watch this chubby lil’ reaper bust endless moves to the beat of his Walkman. and I mean moves: it would be ridiculous to call these “idle animations”, because this groovin’ dealer of death simply never quits. He’s a non-stop boogie machine, and watching him strut his stuff across the game’s tiled puzzlescapes is easily the most charming part of it all.

But as I said, it’s all a distraction: a cute but cunning smokescreen to hide what’s otherwise a fairly mundane, and often frustrating, puzzle game. There are some great ideas here to be sure. Even so, readability issues, an over-reliance on harsh speedrun requirements to unlock later levels, and a general failure to build on the game’s key puzzle elements in satisfying ways ultimately makes Felix feel more damned than divine.

I really wanted to like Felix. I really did, if only because its central premise is absolutely killer. You’re a worker for the supernatural Ministry of Death, and in each of the game’s five chapters, you’re gradually building up to the demise of an unsuspecting victim, making sure everything and everyone is in the right place at the right time to make the tragic happen.

The Ministry is a subtle operation, however, and its field agents can’t just go in scythes blazing. Instead, you’ve got to do your dirty work from the literal shadows, changing the direction of the sun – and the things in the way of its rays – to create ground you can walk on. Once you’ve carved out these dark spaces, you use them to scamper around and manipulate the environment towards your grim desired outcome. 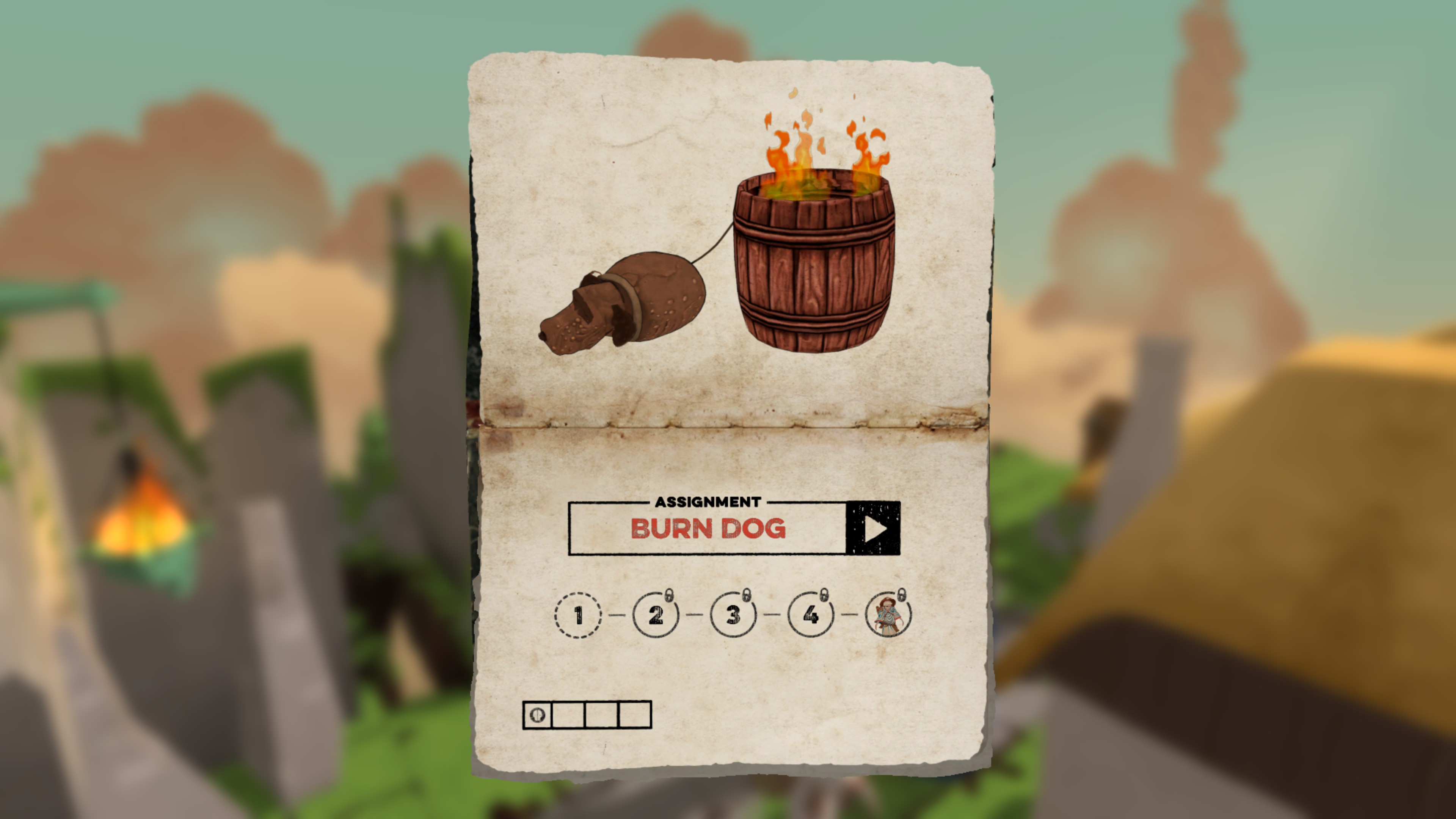 It’s Hitman by way of The Witness, with each scenario in a chapter gradually building on the one before it until your target meets their doom at the climax. And yes, I’m sure there are more efficient methods of killing a blind monk than tying him to a dog, roasting a ham and then shoving said ham down a well to send both dog and monk to meet their maker… but where would be the fun in that?

It sounds like Felix should be an absolute hoot, then. Sadly, however, the reality is a lot less entertaining. Part of the problem is that the central shadow-building conceit never really progresses much beyond moving, and occasionally stacking, a couple of select objects per level to create new pathways as you alternate the direction of the sun. Sometimes there will be extra wrinkles in the form of levers and pressure switches that move other bits of scenery into new positions, thereby casting even more new shadows, but that’s more or less it.

This would be fine if each technique was gradually layered up over the course of the chapters, but you’ve done pretty much everything you’re ever going to do in Felix The Reaper by the middle of chapter two. This ends up leaving later levels feeling like larger, baggier versions of what’s gone before as opposed to anything new and exciting. Indeed, some later levels boil down to inching barrels across the map tile by tile as you flip back and forth between different sun positions.

The layout of those later levels can be difficult to read, too. You can swivel the camera at any time using the right mouse button, or zoom in (painfully slowly) with the scroll wheel. Even then, though, it can be hard to tell whether a slightly crumbled bit of ground is actually a hole or a navigable path. Similarly, dealing with multiple objects (particularly during those inch-by-inch moments) can be an absolute nightmare, especially when the angle of the camera doesn’t quite match up to the tile you need to drop something on. For me, this resulted in a lot of accidental or incorrect item placements that were tedious and frustrating to correct, especially when the only ‘undo’ function rewinds you all the way back to the last ‘milestone’ or puzzle checkpoint. Even using undo, I ran into issues where the game recognised I’d placed objects correctly, despite me having come at them from the wrong angle, resulting in yet more awkward barrel shuffling as I attempted to put things right. 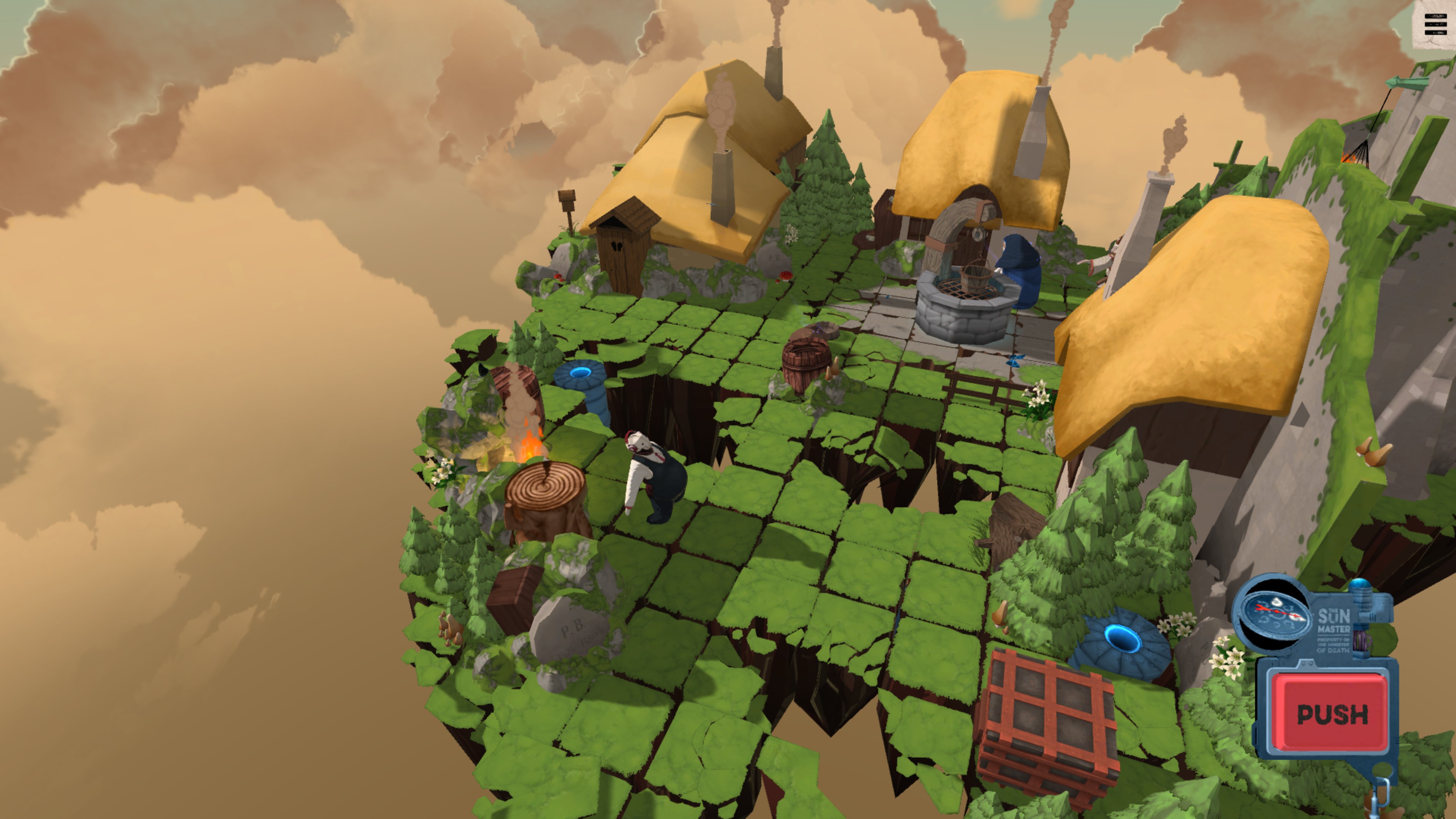 Again, I wouldn’t have a problem with this if so much of Felix’s replay value didn’t depend on performing super efficient speed runs within super strict time limits. Most irritatingly, you never know about these time limits in advance of attempting a level. Oh no. It’s only at the end of a task, when you get your field report score card, that you’re told what the requirements are for earning bonus-level-unlocking reaper stamps. Not before. Not during. AFTER.

That’s madness as far as I’m concerned, as it’s yet another thing you’ve simply got to memorise (on top of the number of sun turns you can perform, the number of times you’re allowed to get caught in the sun when you make a mistake, the number of tiles you’re allowed to travel over, and the number of actions you can perform) in order to see everything the game has to offer. It’s not fun being penalised for things you aren’t aware of, nor is it particularly satisfying doing anything against the clock in this game, especially when it involves such fiddly item manoeuvring. 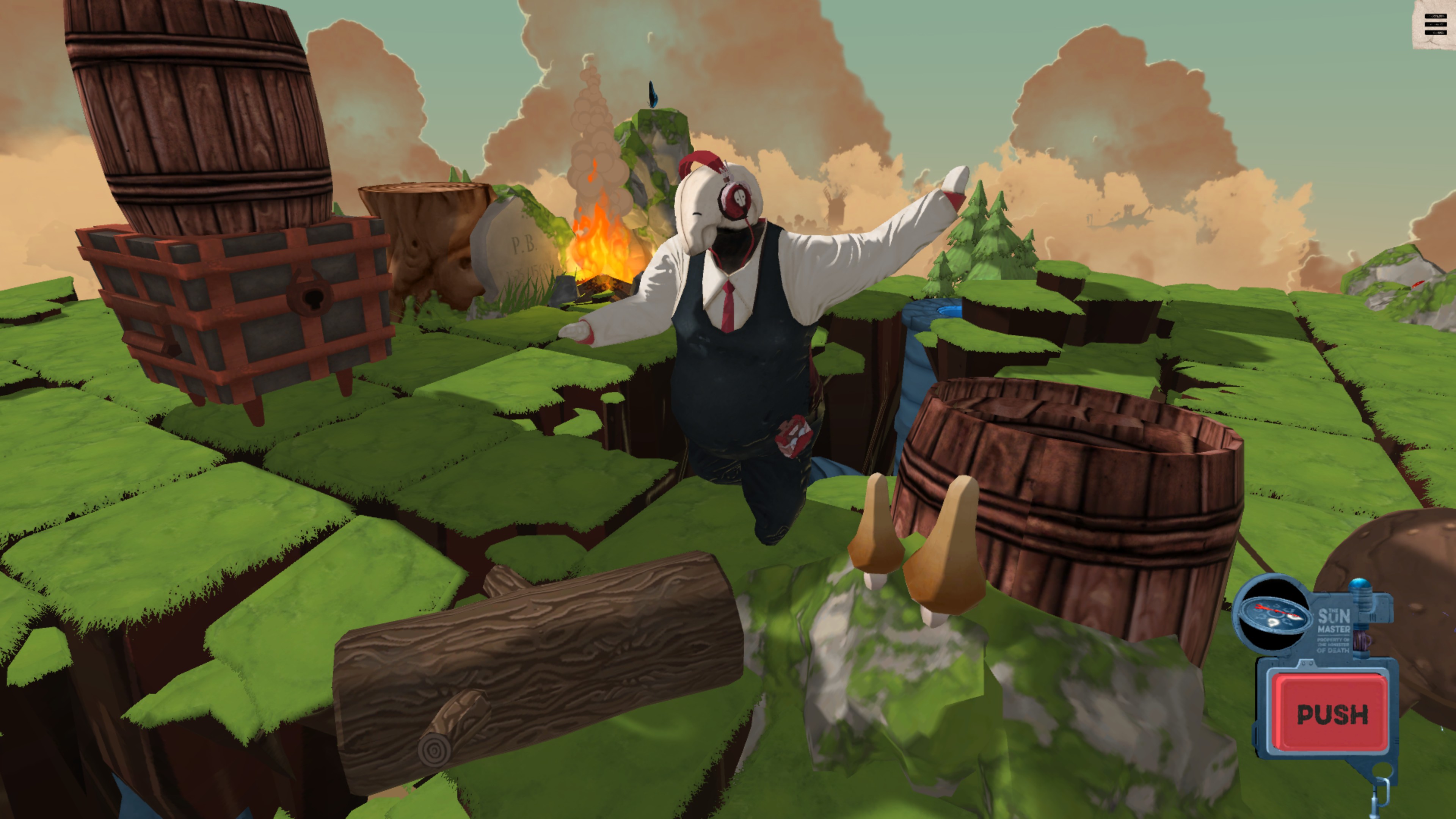 Indeed, it was often quicker to restart an entire level than try and correct my mistakes, which just made me feel like even more of an imbecile than before. Ultimately, it all left me feeling cross – which is a shame, given how lovable and endearing Felix is as a character. I’d jump at the chance to play another game with him in the lead role, especially if it actually made use of his love of music (maybe in a rhythm action capacity?) instead of using it as a neat thing to look at while you rage and froth at obtuse light puzzles.

Alas, his current outing just doesn’t do it for me. Some of you will no doubt get a kick out of his speedrunning, memory-testing antics. For me, though, even Felix’s sweet, sweet dance moves can’t throw the game’s glaring design flaws into shadow.

More about Felix the Reaper