The Disco Elysium Thought Cabinet is one of the game’s defining features. And that’s saying something, considering the many different ways in which ZA/UM have deviated from the traditional RPG structure. In Disco Elysium, it’s not just tools and clothes that you can equip but also Thoughts that you can mull over and adopt, almost always with both positive and negative results.

Our Disco Elysium Thoughts guide will explain the Thought Cabinet as clearly as possible, from how you gain access to different Thoughts to how you can use them, and how they change the game for you in return. It’s a bit of a head-scratcher at first, but stick with it and you’ll come to realise the benefits of this novel system. 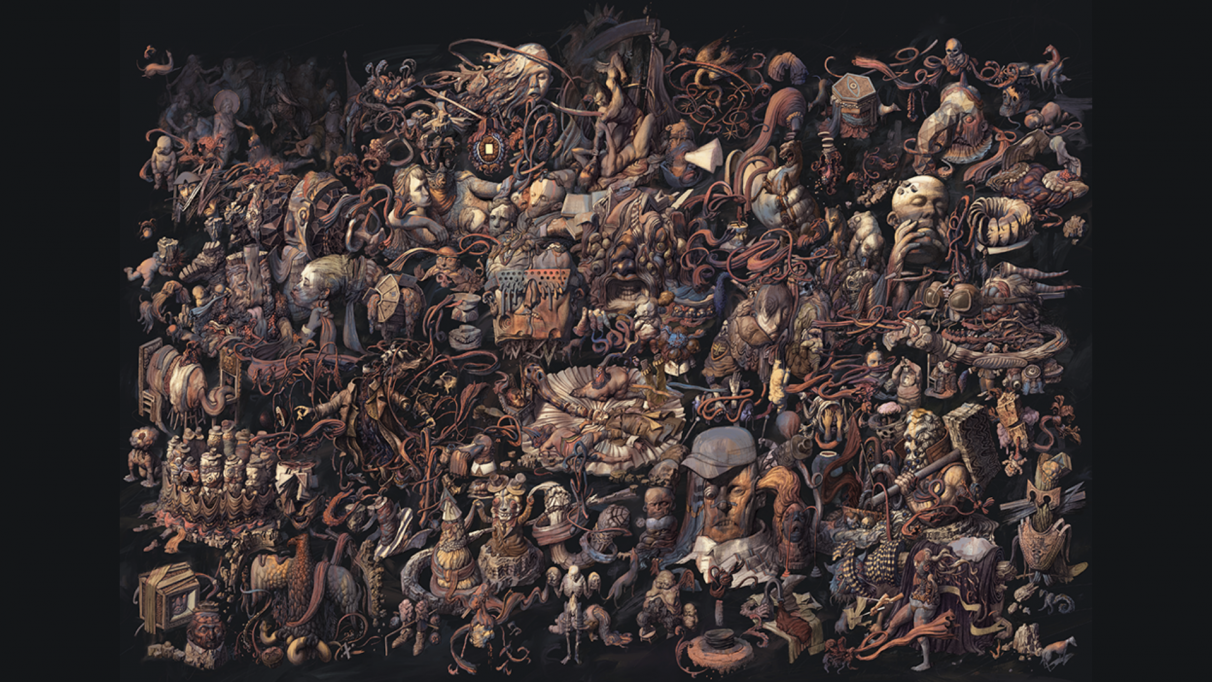 This is a tapestry of all all 53 Disco Elysium thoughts, created by the incredible concept artist Anton Vill. If you’re a very particular sort of person, you might want this as your desktop wallpaper.

It won’t take you too long after starting the gargantuan story of Disco Elysium before you come across the Thought Cabinet for the first time. Don’t be alarmed! While it is an unusual mechanic for sure, it’s fairly easy to get to grips with once you know the basics:

Click any of the links above to learn more, or just keep scrolling to find out everything you need to know about Disco Elysium’s system of Thoughts and the Thought Cabinet itself. 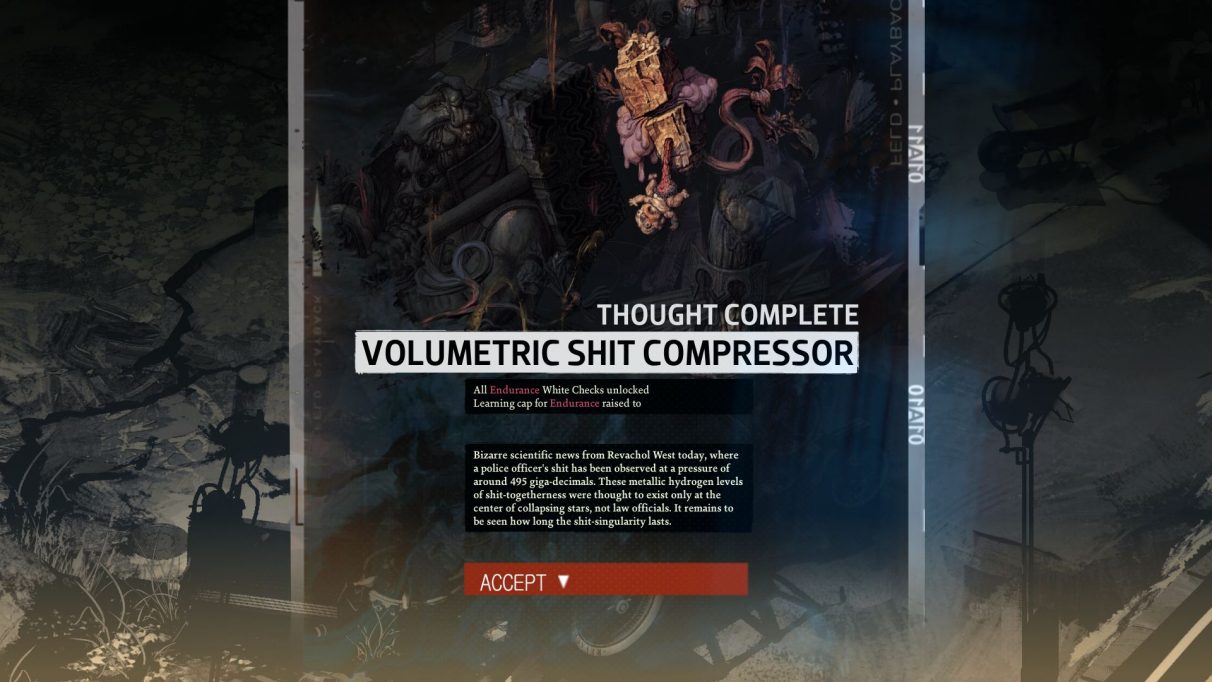 What is the Thought Cabinet?

First things first: the Thought Cabinet itself. It’s actually very easy to understand the moment you realise that Thoughts in Disco Elysium act like a physical item, just like a pair of trousers or a horrific necktie. And while such items of clothing are equipped in your main inventory, the Thoughts you gather throughout your playthrough can be viewed and equipped in your Thought Cabinet. It is quite literally an inventory for Thoughts.

How do you get Thoughts?

The main way that you come across new Thoughts to mull over in the Thought Cabinet is by spending time talking about anything and everything with anyone and everyone. The purpose of language, after all, is to communicate ideas and information. But there are other ways that you can find new Thoughts as well; from internal dialogues between yourself and the many voices (read: skills) vying for control of your head, to reflecting on something that just happened or is happening, or a hundred other things besides.

There are a total of 53 Thoughts in the game, and the devs have said that you will certainly not discover them all in a single playthrough. Not even close, in fact. Your Thought Cabinet only starts off with three slots for Thoughts, and while you can spend a skill point to unlock a new slot, the maximum number you can internalise at once is 12. So it’ll take you a great many playthroughs and a great deal of experimentation to find them all.

What do you do with Thoughts?

When you have a new Thought, you will be notified by a little marker in the bottom-right corner of the screen, over your Thought Cabinet icon (the icon of the head). In your Thought Cabinet, you can click on different Thoughts and read the “problem” that each one presents.

If you want to solve a problem, then you’ll have to equip it in one of the slots in your Thought Cabinet. This represents your character going through the process of internalising this Thought while he is going about doing other things. Each Thought has a different amount of time required to internalise it. Some may take minutes, while other, more momentous thoughts, may take days. After that time, the Thought is internalised; the effect it bestows upon you changes, and you may read the “solution” of that Thought.

What do Thoughts do for/to you?

Thoughts represent a great many things in this massive and ambitious RPG. At the simplest level, they are perks that give you particular tangible effects. Often, this comes in the form of skill adjustments. One thought might give you +1 Suggestion, for example. But it may also give you a negative effect, such as -1 Endurance; or perhaps lowering the level cap of a particular skill or set of skills.

And the effect of each Thought changes once you internalise and “solve” it. You might need to sit through a few hours of some negative effect in order to unlock the positive effect of the internalised Thought.

But that’s not all; Thoughts are also a representation of your character’s alignment and personality. Depending on the thoughts you have equipped in your Thought Cabinet, different people in the city of Revachol may treat you differently; new dialogue options (or even whole quests and storylines) may open themselves to you. In the words of ZA/UM game designer Robert Kurvitz, “this adds a new level of role-playing options I like to call soul customization“.

Can you forget Thoughts?

There’s a pretty clear risk/reward thing going on with the Thoughts system of Disco Elysium, then. You don’t see the full effect of a Thought until you have spent time internalising it; and once you do, it might turn out to be a pretty negative effect, but it’s too late: you’ve already internalised it, and as we all know, it’s not easy to forget about unwanted and intrusive thoughts.

But it’s not impossible. In fact, in Disco Elysium it’s very straightforward to discard unwanted Thoughts. All you need to do is spend a skill point on the unwanted Thought to forget it forever. Of course, that skill point could also have gone towards expanding your Thought Cabinet, or upgrading one of the many Disco Elysium skills at your disposal – so it’s still a bit annoying to have to spend it on undoing the negative consequences of your prior choices. But it may prove necessary at times. Plus, it frees up another slot for a better or more interesting Thought later on! 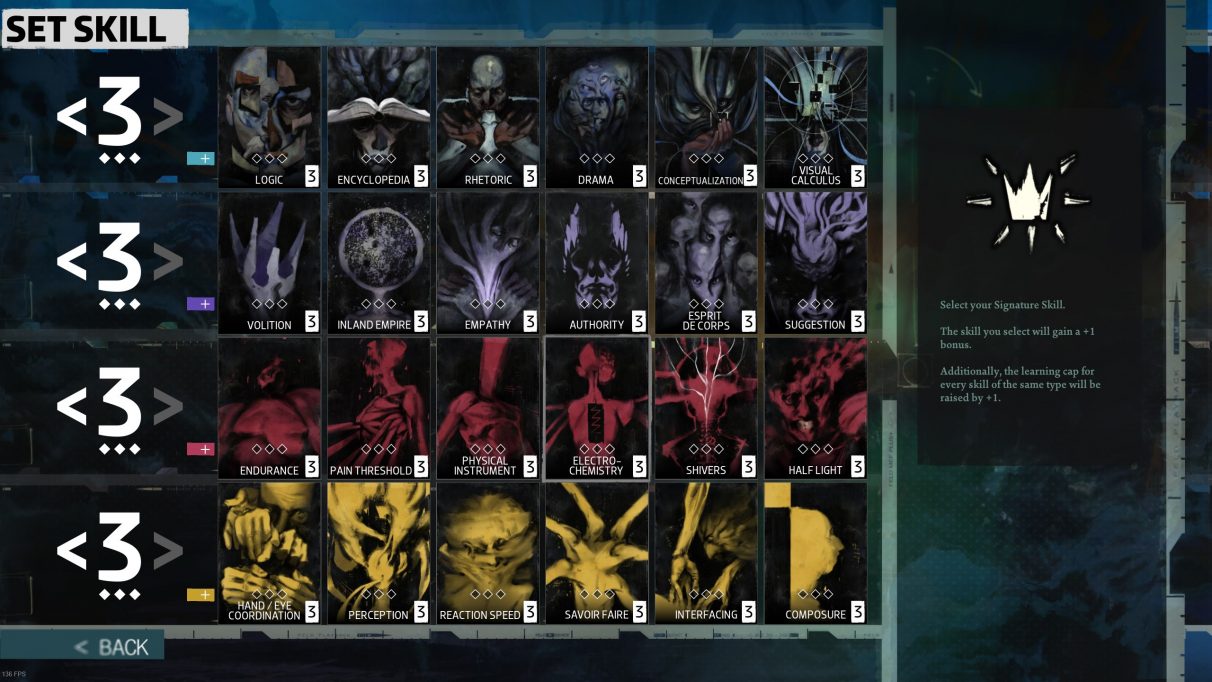 If you’re also scratching your head about the game’s similarly mind-melting skills system, why not check out our new Disco Elysium skills and character creation guide?

Hopefully that’ll give you enough of a primer on Disco Elysium’s Thought Cabinet to ensure you’re not entirely lost when it first crosses your path. Let us know in the comments some of the standout thoughts that you came across during your playthrough(s)!