One of my favourite tropes in Science Fiction is aliens whose cultures are built around some hangover from the time before they made it to the stars. Take the Kelpiens from Star Trek: Discovery, whose existence is dominated by the inbuilt anxiety that comes from having once been prey species. Or Iain M Banks’s Idirans, the “top monster on a whole planetful of monsters’”, who lived in peaceful isolation until an alien invasion nearly wiped them out, after which they became fixated on brutal galactic expansion.

There are millions of weird things that can happen in space, and it’s fascinating to speculate about what sort of long shadows these formative events might leave on the development of a spacefaring culture. But why speculate, when you can play it out yourself? That’s the promise of Stellaris: Federations, the synth-heavy 4X’s upcoming expansion, which will include no less than eighteen origin stories for its customisable cast of mushroom-folk, misery insects and triocular platypuses. And yes, one of them involves your homeworld blowing up almost immediately. 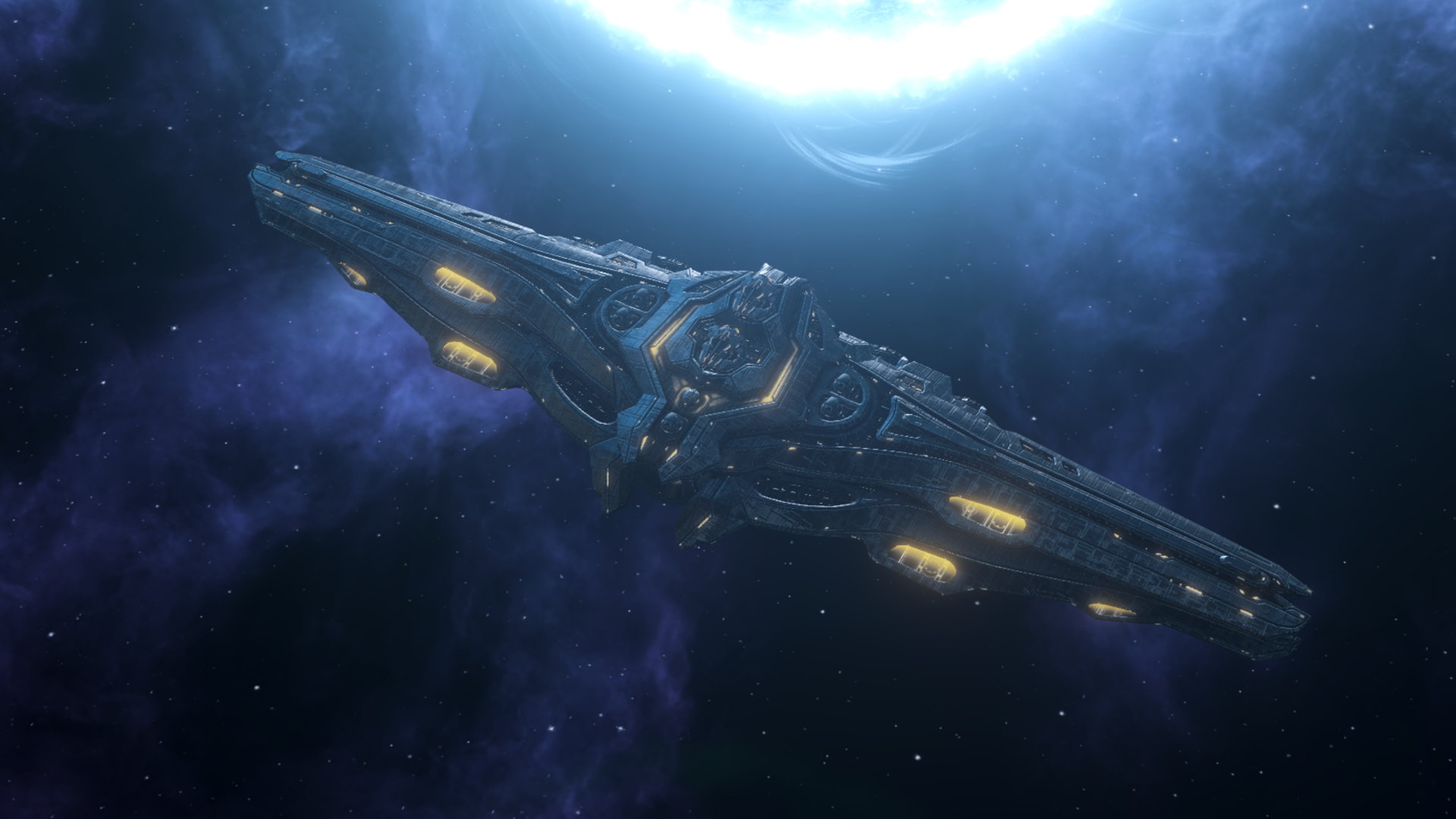 Of course, the component parts of the origins mechanic have been in the game for some time. Back in 2017’s Utopia update, Paradox added a bunch of specialisation options for empires called civics, and a small few of these described a species’ background and gave it associated traits. For example, choosing post-apocalyptic started you off on a tomb world, and made all of your citizens well hard because they’d already brushed off a nuclear war or two, and probably ate raw dogs for breakfast.

The problem was, you could only choose two civics at the start of the game, and only four of those available had to do with your society’s background. A lot of the time, you wouldn’t end up with any sort of quirky background pick at all, because you’d be too keen to load up on other civics such as the tech-rush friendly Technocracy. More frustrating still, because some types of empires (such as gestalts and megacorps) started with hardcoded, unique civics of their own, they were unable to choose background civics at all.

As is so often the case with Stellaris if you turn your back on it for five minutes, that’s all changed now.

The four background civics have been promoted to origins, and joined by up to fourteen entirely new entries. I say “up to” because, while I’ve got details on six of of them and an idea of two more (that’s eight, if you hate maths), the remaining six of the promised eighteen are a mystery. And yes, that’s eighteen in total – a dev blog in September mentioned sixteen, but now we’re up two, apparently, and there’s a possibility more will be added before launch.

An empire can choose one origin alone at the start of the game, and can’t change it (unless of course time travel is added to the game – which let’s face it, it probably will be at some point). 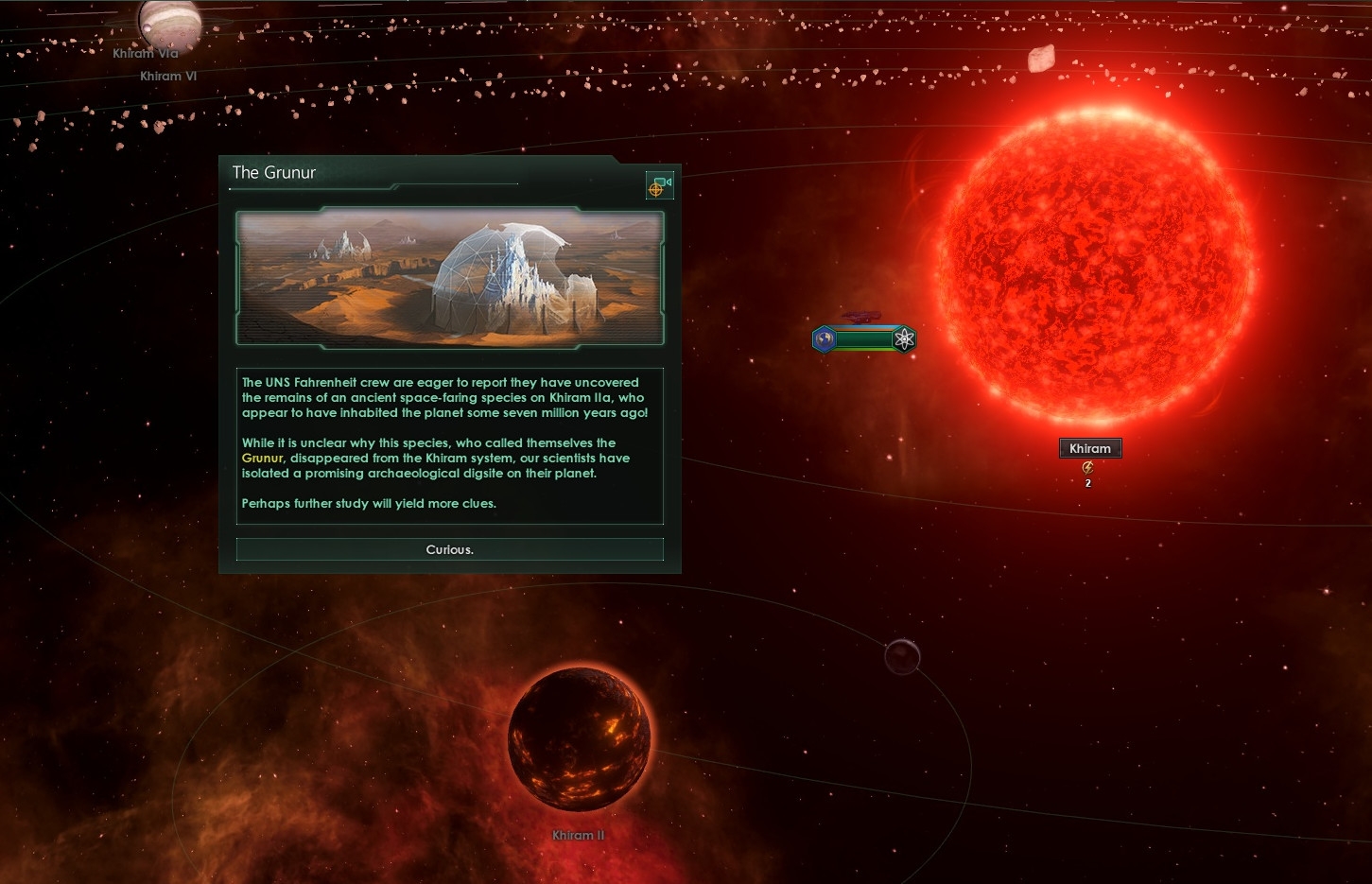 Well, first there are the four previous background civics: syncretic evolution, post-apocalyptic, mechanist and life-seeded. These are all origins now.

Then I’m told there are two origins relating to two of the federation types in the new expansion, where the player starts as part of a small, local federation. The five new federation types are Galactic Union, Trade League, Martial Alliance, The Research One Whose Name I Didn’t Write Down, and Hegemony. This is a bit of fun guesswork, but for maximum contrast, I’m assuming the origins will apply to Galactic Union (the nice one), and Hegemony (the mean one). That makes six so far. 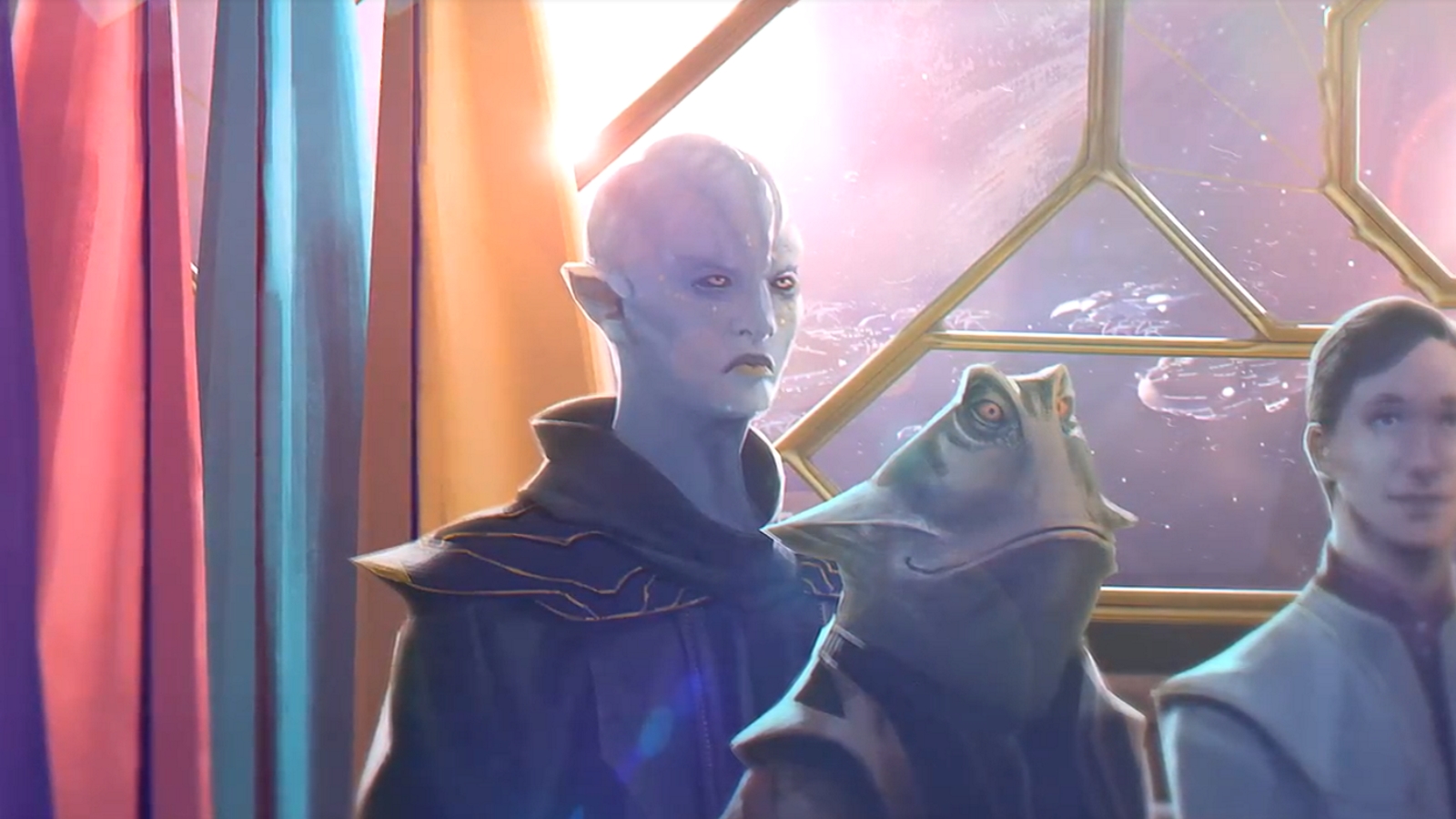 Look at this poor bastard from the Stellaris: Federations trailer. Bet he has to go everywhere with that bloody frog, and he *hates* him. You can almost feel the contempt radiating from his face.

Seventh is Remnants, where you start on a relic world, and can send pops (that’s population units, not your dad) to work on dig sites, where they can uncover “the past glory of your ancestors”. Sounds like an interesting pick for tech-focused empires looking for rapid advancement, perhaps?

Eighth is Tree of Life, or “the Avatar one”, where you start with a powerful, civilisation-buffing gigatree on your homeworld, and must protect it at all costs. If cigar-chomping humans busticate your big plant, you’ll experience a heavy penalty.

Ninth is Void Dwellers, where you start on a habitat orbiting your pulverised homeworld. It’s not all bad news though, as your people will get a bonus to living in habitats, and will be able to build them earlier and more cheaply than anyone else.

Tenth is Shattered Ring, which either involves waking up the morning after consuming a hideously powerful vindaloo, or a species living on the last intact segment of a vast, ruined ringworld. If the latter is true, you’ll be able to gradually repair the rest of the megastructure as the game goes on. 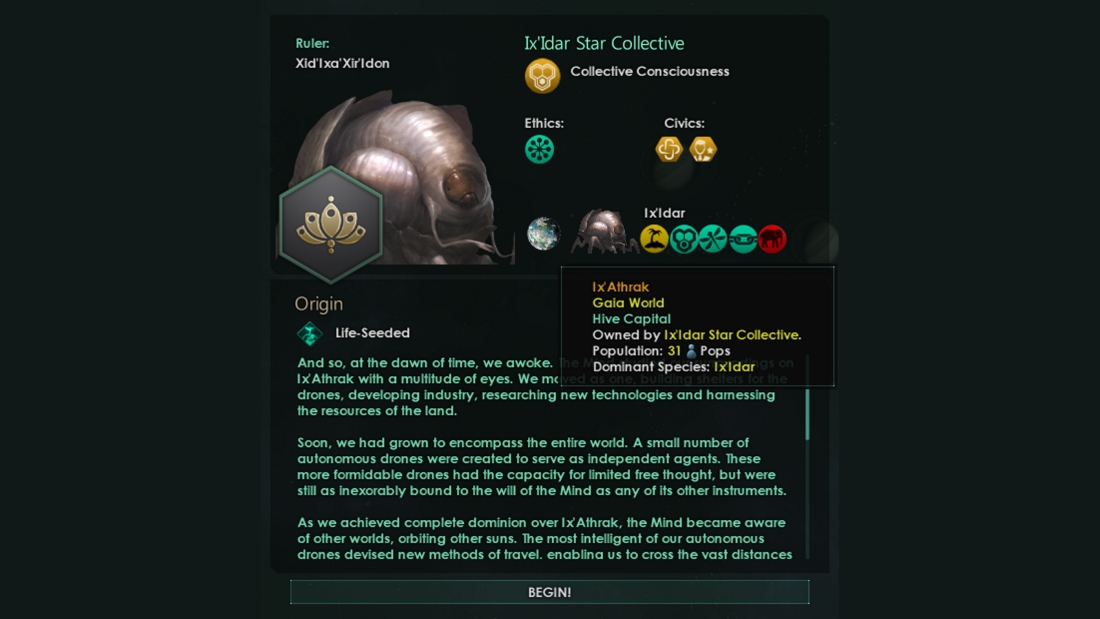 Finally, you can have hive-minds that are life-seeded! Mechanist megacorps!

Eleventh is Scion, in which you begin the game as a vassal of one of the dreaded Fallen Empires, and have unique interactions with your ancient masters. This one has the potential to get brilliantly dramatic, depending on the type of empire you’re shackled to – Militant Isolationists, anyone?

The twelfth (and best) origin is DOOMSDAY, mentioned up top, where you begin on a planet that will explode in exactly 64 years. Oh, and there’s no guarantee that there’s a habitable planet in range for settlement during that time. Apart from anything else, if you start the game with a doomsday empire as your neighbour, you can expect things to get pretty bananas pretty quickly. Paradox have not yet confirmed whether your doomed homeworld can eject a single child refugee to become a superhero elsewhere in the galaxy.

That’s twelve out of eighteen. So what about the remaining six?

We can probably presume there will be a vanilla origin option, with a completely ordinary start, for players who think milk is spicy. Then, there’s something called Prosperous Unification, which we can see a button for on the aforementioned dev blog, but know little else about.

Beyond those, the last four origins are a mystery. It may be the case that they’re already known as non-background civics that have been modified slightly to become origins, or they could be even stranger than the ones revealed already. Either way, the origins so far seem to present a huge variety of difficulty conditions and incentives for different playstyles, and I think they’re going to make for some classically weird Stellaris stories.