Despite living in the aftermath of a nuclear apocalypse, Fallout players have never been short on places to drink. It makes sense, I guess. If your days are spent fighting off irradiated terrors, it stands to reason you’d want to go somewhere to let off steam. But Fallout 76 launched without NPCs. Nary a bartender with a friendly ear to be seen (at least not until the Wastelanders update arrives some time next year).

But 76 players are a creative bunch, and now some are striking out and opening up their own drinking establishments using the game’s C.A.M.P. building system. These areas aren’t just adding to the immersion — they’re becoming hubs where community members can get together and plan events, organising everything from drunken pub crawls to raucous bar fights. Wasteland Brews was one of the first of these bars to open its doors. A red-brick, open plan brewery, it’s the type of place you can imagine smelling of sawdust and hops.

The landlord, who goes by “BeardedIAm”, tells me he created Wasteland Brews back in February this year. “I don’t say that to mean I’m an originator of anything, but it’s been my goal from nearly the beginning. I saw the HOA [the Wasteland Estates Homeowners’ Association] and some others streaming player events and I thought, ‘Hey that looks awesome, I could maybe create a community too.’” Gradually, more players have gotten involved, and BeardedIAm says they’re now working on growing their bar community for streaming events. 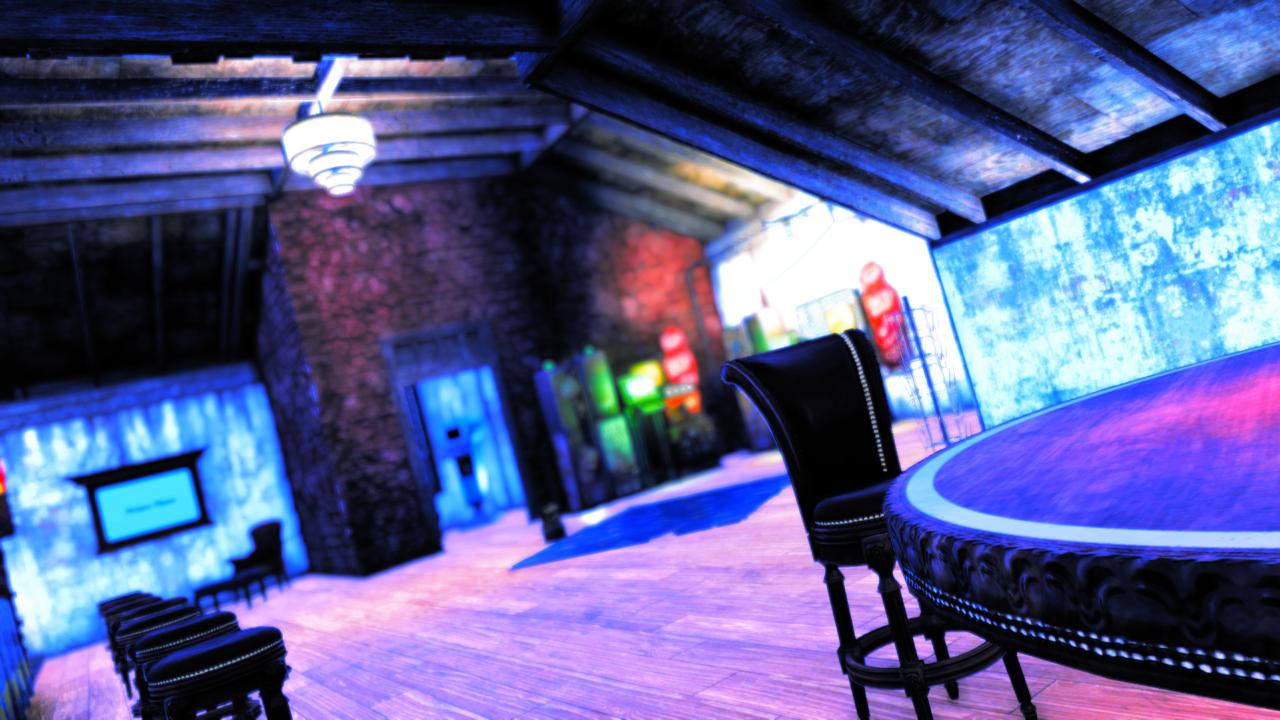 For the player known as “xredder”, it was the prospect of designing her own bar, the El Gato, that excited her most. But it wasn’t until the Wild Appalachia update that she took the plunge, with the update introducing brewing and distilling to the wasteland, alongside a bevy of new beverages.

“I’ve been wanting to open a bar in real life,” xredder says. “So I saw an opportunity to construct my dream pub when Wild Appalachia launched. The ability to brew, distil, and ferment my own alcohol was a perfect way to get the pub going. And the fact that I can make Tequila was all the incentive I needed.”

The El Gato pub is a cat-themed bar located just east of Vault 96, overlooking Watoga and the Sparse Sundew Grove inside the Cranberry Bog. It has a couple of distinguishing features to speak of, including a large central fireplace, and an outdoor balcony that’s home to live music and breathtaking views of the rest of Appalachia. 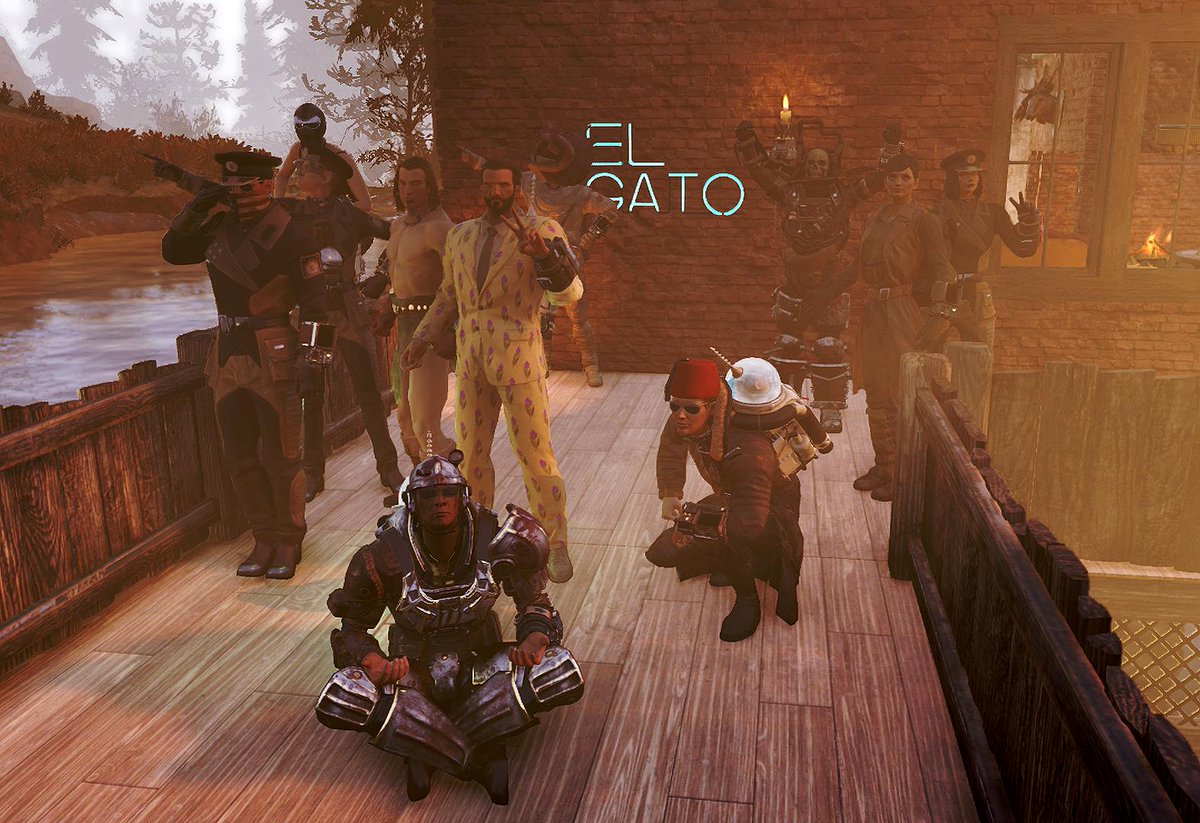 A meetup at The El Gato

Because of its location, many consider it the perfect stop off on the way to take on the Scorchbeast Queen, an improbably huge monster spawned by dropping a nuke on a certain area. At the El Gato, players are able to collect some dutch courage and prepare themselves for the event ahead.

On arrival, visitors can sip on complimentary drinks from the VIP punch bowl, including tick blood tequilas and lead champagne Bellinis. This is in addition to having access to the bar’s vendors and workshop resources to restock on items and carry out those all-important repairs on their damaged or broken equipment.

“I get randos all the time with the vendors active,” xredder tells me. “And I get lots of heart and thumbs up emotes when they walk in and spend some time.” The El Gato also enjoys a few select celebrity visitors. “Both the Mothman and the Flatwoods Monster have come by for a drink. It’s comical when I spawn back at my pub, and I get so starstruck that I panic and go into stealth mode — still getting my paparazzi pics in of course.” 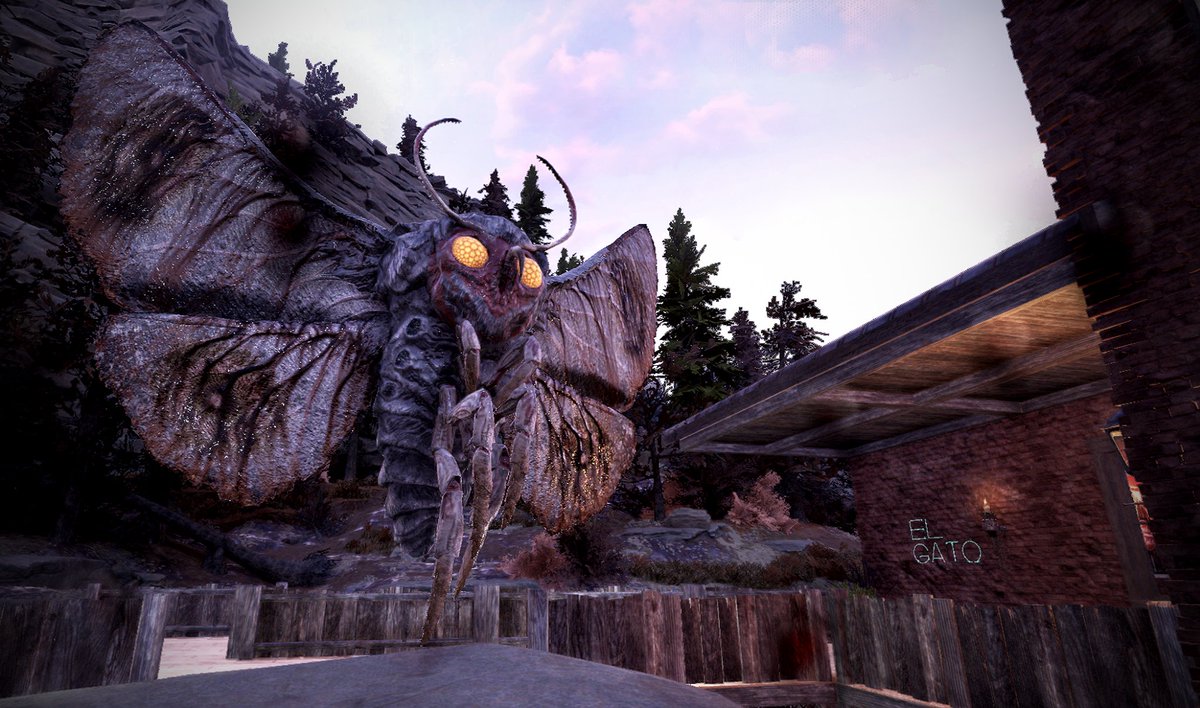 But it’s not always easy running a bar in the apocalypse. If it’s not the local wildlife causing problems, then it’s the clientele that end up making a scene.

“Sometimes I get Radstag heads or Scorchbeast DNA just dropping from the sky,” says xredder. “I’ve had patrons spawn into my fireplace, under the bar and in the fusion generator room. It’s hilarious for about a minute until the angry emote pops up.”

But BeardedIAm and xredder aren’t the only two wastelanders to start their own businesses. “Crawler2000” is the owner of the Sunnytop Saloon, a western-themed bar located just south of Sunnytop Station, in the Savage Divide region of the map. Past the lumberjack statue at its entrance, the interior of the bar is adorned with rustic, Western-themed furnishings, including pre-war artefacts and portraits of the local wildlife.

Crawler2000 initially built the Sunnytop Saloon after getting a lot of praise for another camp he designed. “It was a diner named Plutonium Pastries located at Silva’s Homestead. People liked the aesthetic of a food-based shop, so I decided to rebuild a new restaurant,” he says, explaining he wanted it to be “a true representation” of a saloon. The Sunnytop is based on images of actual 19th century saloons that Crawler2000 researched. 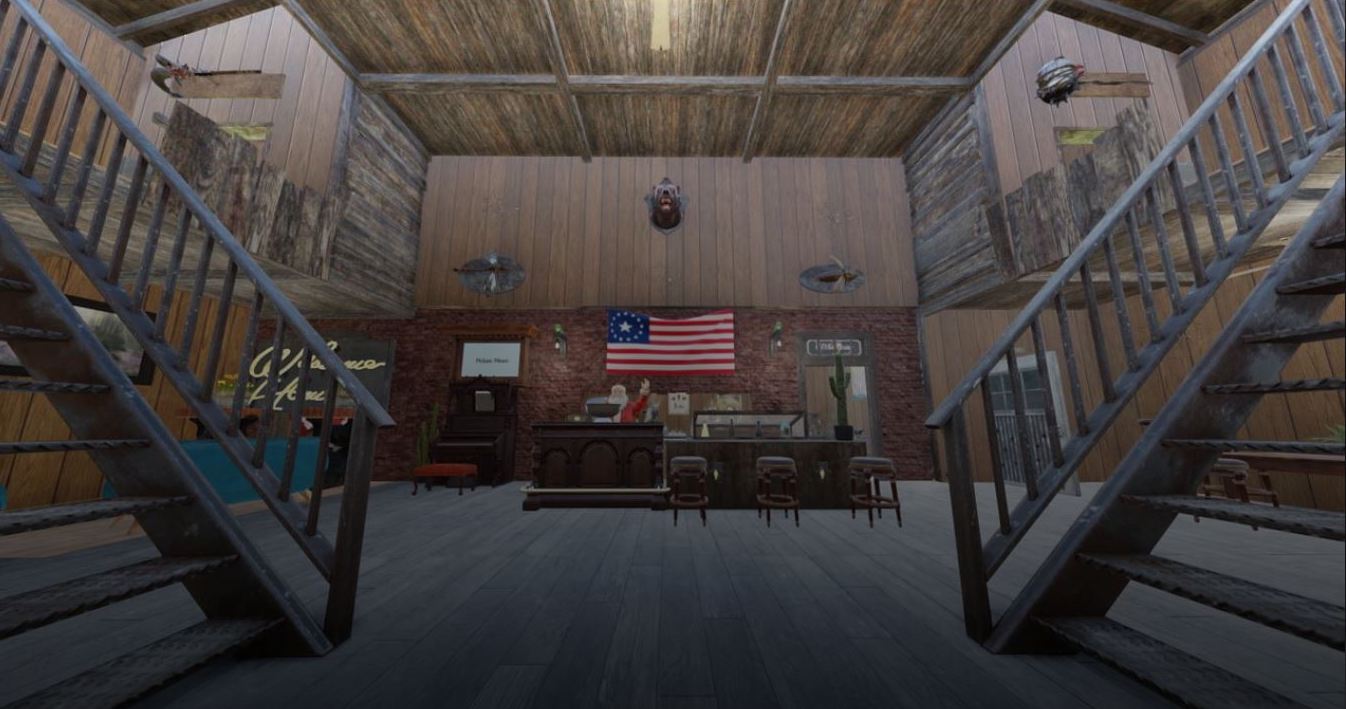 Like its contemporaries, the Sunnytop Saloon stocks a number of drinks to choose from, including Nuka Darks (35 caps) and Nukashines (50 caps). Because of its location, however, the Saloon doesn’t get as much foot traffic as the El Gato or Wasteland Brews. Right now it mostly serves as a hangout for Crawler2000 and the rest of his faction mates in between their adventures in the wasteland.

But, as BeardedIAm noted, their community is growing, and these disparate bars are now all linking up with each other and putting on events. The meetups are a great way for them to show off their creations, but they also help the players come up with fun new methods of interacting with Bethesda’s post-apocalyptic sandbox. “[BeardedIAm] has been a great bar community organizer and he was the first to recognize and stop by the El Gato,” says xredder. “I participated in a bar crawl with Wasteland Brews and UERBlitzkrieg, the owner of the military-themed Wartime Tavern, which was amazing.”

They’re also getting creative with the way too much boozing in 76 can cause you to blackout and wake up somewhere random. xredder held a “Blackout Blowout” party with BeardedIAm. “Patrons drank Nukashines and hightailed it back from their blackout spawns as fast as they could,” she explains. “No fast travel allowed.” 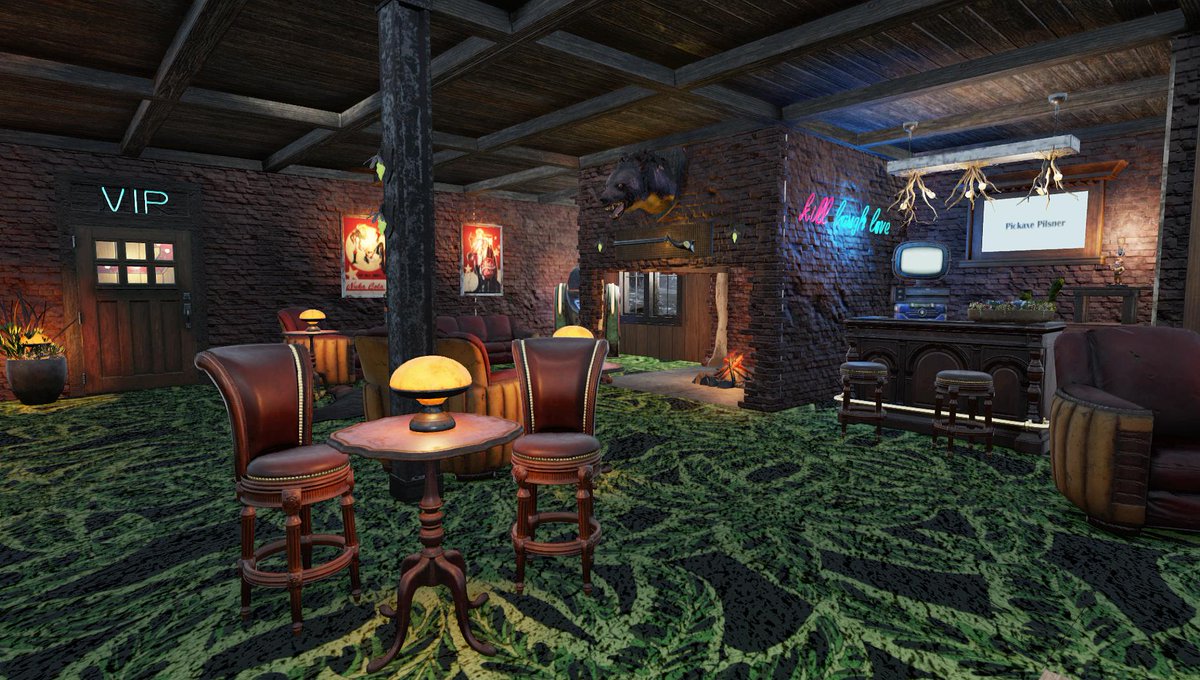 When Fallout 76 was first announced, Bethesda claimed that they wanted the community to rebuild the wasteland together. It was a marketing line that proved controversial upon its release because, when you start playing, it feels like there’s a lack of consequence to player input. Whenever you repaired a power station or put down a camp, your progress would more than likely just reset upon logging in again. But these community-created bars feel like an interesting compromise, with social media accounts and events giving these locations a more significant presence within the community.

And, as with the players who created an art gallery, the HOA’s lethal trivia game show, and the network of roleplayers filling in for the missing NPCs, it’s proof that the horrors of a nuclear wasteland are no match for the indomitable spirit of a creative player base.

So if you’re wondering what it takes to rebuild after the apocalypse, simply put down a bar and polish off a few glasses.

Photos of Wasteland Brews, The El Gato and The Sunnytop Saloon very kindly provided by their respective owners.