If you’ve played Oxenfree you probably already know a little of what to expect from Afterparty: a smart, walking–and–talking adventure game where optional speech bubbles appear above the characters’ heads; naturalistic dialogue between characters whose relationships grow in complexity as the game goes on; some weird supernatural stuff.

Afterparty does all these things, but Night School Studio’s second outing also feels stronger and punchier — and not just because it’s set in hell, so everyone says rude words a lot. 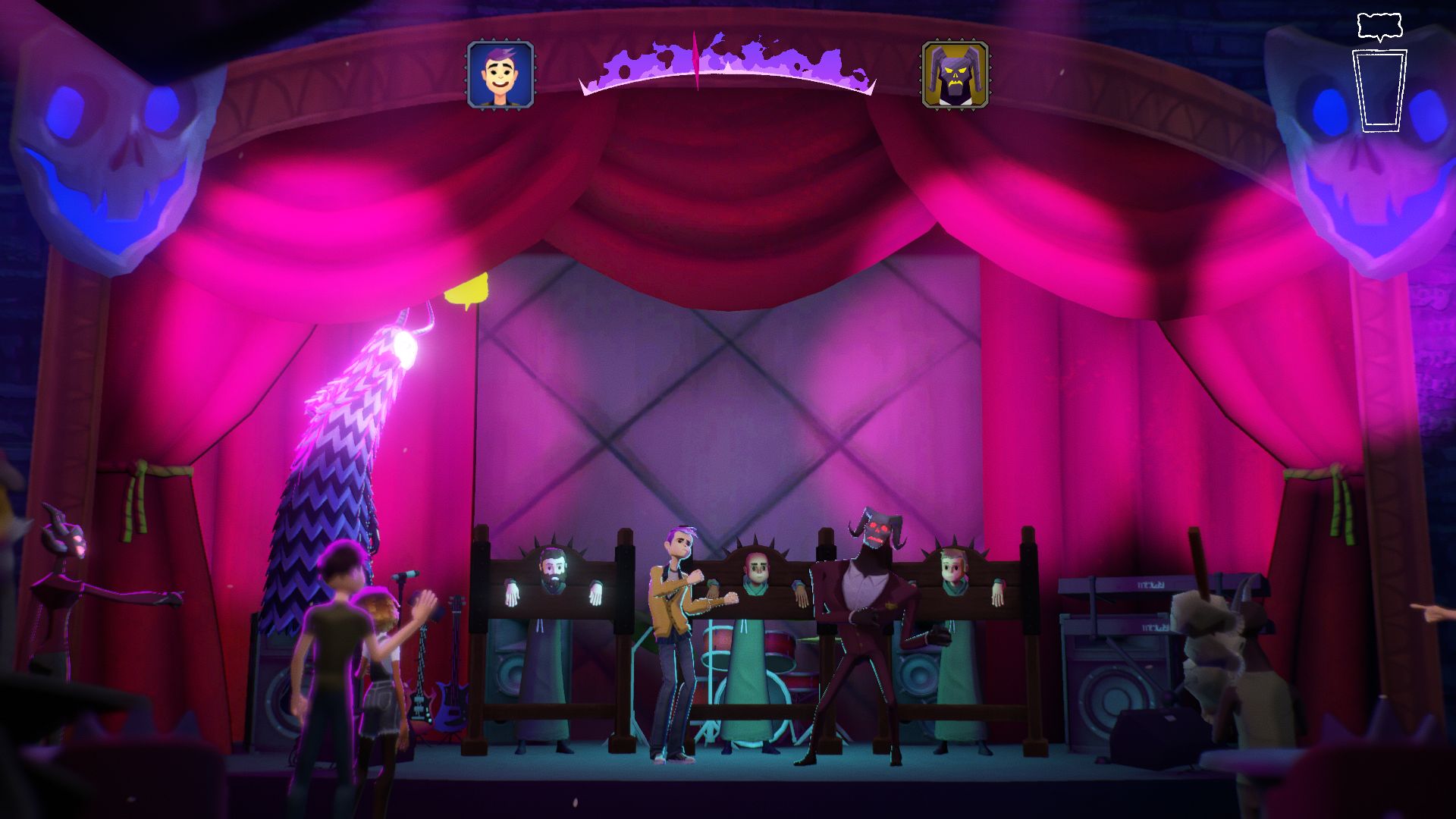 Dual protagonists and best friends Milo and Lola died at almost the same time. Your control switches between the two throughout, and when we meet them they’ve just pitched up in the least desirable of afterlife locales. The hottest underground station. The most spicy of meatballs. The big apple. But hell, it turns out, keeps office hours – and because Milo and Lola turn up just as the clock rolls over onto 6pm, the piss treadmills and eyeball scoops are all turned off for the night, and everyone has gone to the pub.

You see, while hell might be eternal damnation for us humans, for demons it’s a job — and it’s one that might give them RSI if they don’t take a break. But as the saying goes: work hard, play hard. So when the torture stops for the day, humans and demons alike get wasted together. Night School Studio’s version of damnation is 50% torture and 50% rager. Which seems pretty apposite.

All of this means Milo and Lola have a few hours to try and make good their escape. They’re informed that hell has one of those classic ‘beat me in a contest’ loopholes where, if they’re able to beat Satan in a drinking game, they get to slip through said loophole back to life on earth. 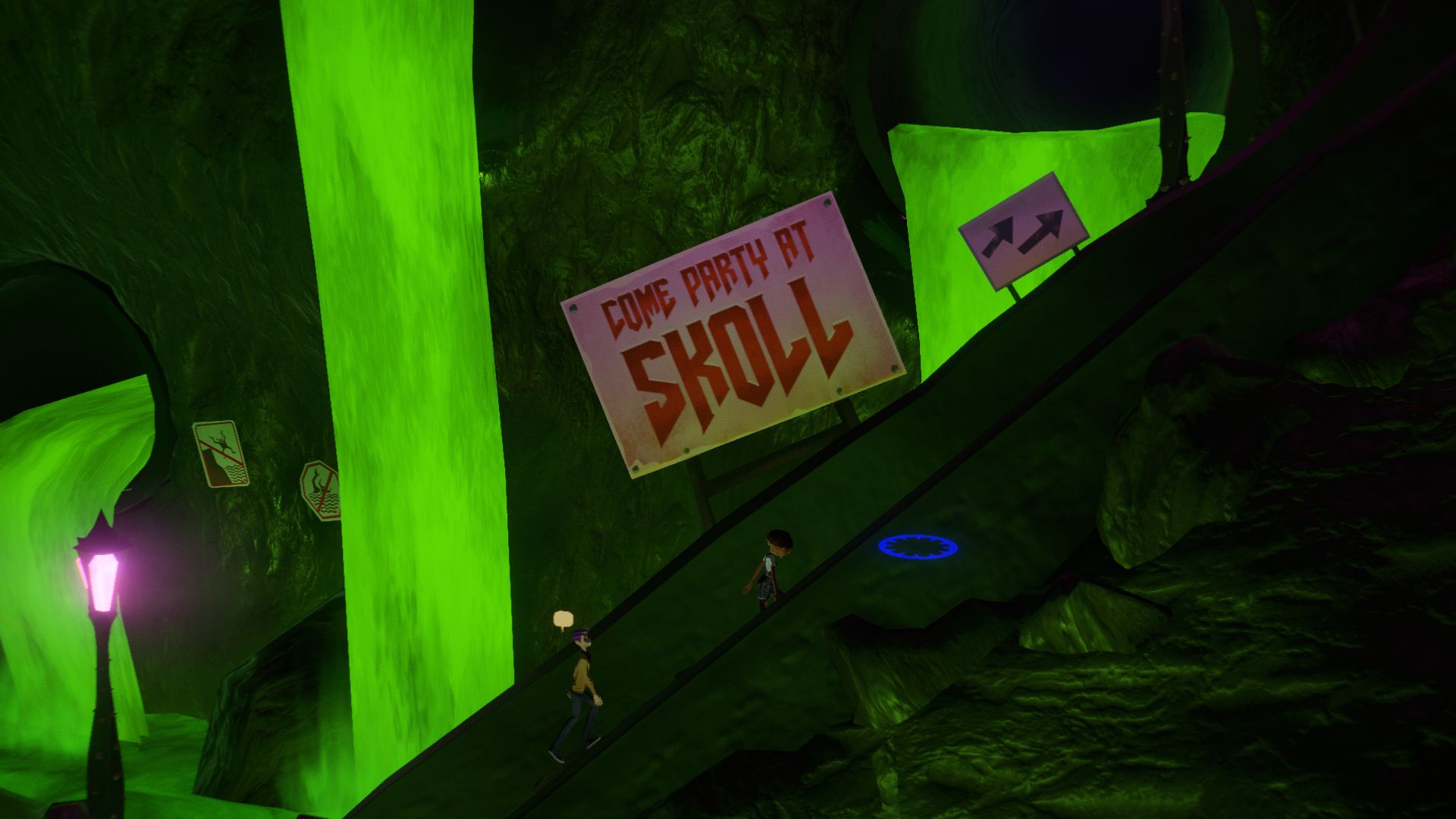 Practically, this involves trekking around different bits of hell, doing odd jobs and favours for people, first to get tickets for Lucifer’s house party, and then to get his siblings’ seals of approval to booze-fight him. It’s quite the trip. Much as when Europeans visit America and are astonished at the size of the food portions, everything in hell is more. Colours are intense, there are bright lights and bars everywhere, and there’s always, if not loud music, then at least a distant thump of bass coming from somewhere. Unlike in Oxenfree, the areas you explore, while viewed side-on, have depth to them. A few times, I caught lights glistening off the damp rocks in the foreground and was struck by how lovely hell looked from certain angles. Nice place to visit, and so on.

On your way round the infernal houses, you’ll be engaging in little dialogue choices and minigames. The latter are simple but cleanly done, and fun — Simon Says dance-offs, and aim-and-shoot beer pong, for example — but the former are a small step beyond normal binary dialogue decisions. It’s becaush of the drink. Alcohol in hell is stronger, acts immediately, and has interesting side effects, so gulping some down before you speak will usually give you an extra option. 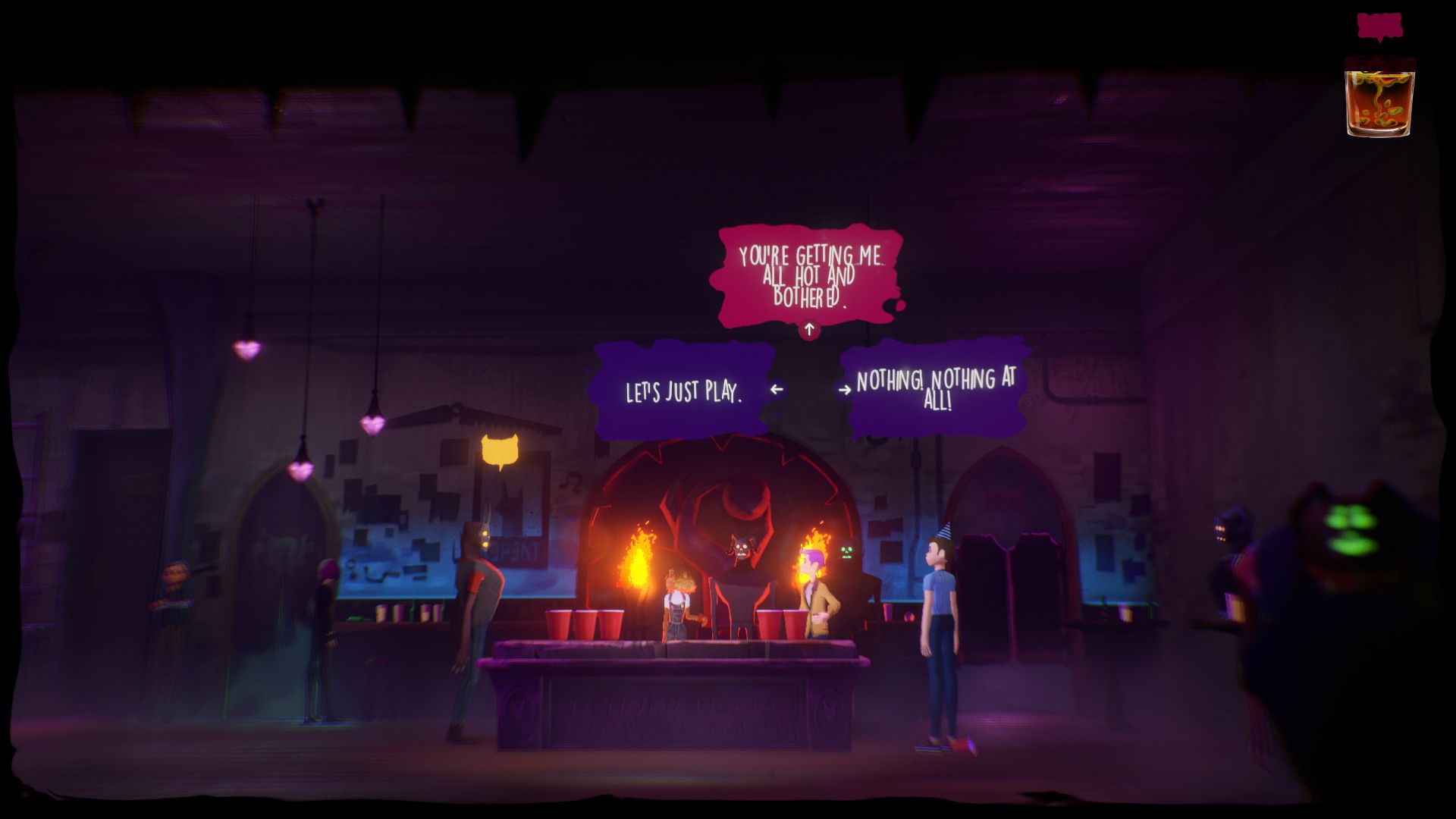 Each bar you visit — the sports dive, the dance club, the Hard Rock knockoff — will have a different menu of four options. Two are usually Liquid Courage, and will just convince you that whatever you’re sort of thinking of saying is definitely a good idea, while the other two will have more whimsical results. Like the one that makes you talk like a pirate. Or the one which turns you into a Hopeless Romantic, wherein Lola can ‘hear wedding bells!’ when someone speaks to Milo. I had a conversation with some very serious demonic lawyers and decided to go with a drink that turned me into a Witty Vaudevillian, so I kept responding to their questions by yelling “Say, that reminds me of a joke!” in a “Now listen, see!” comedy accent.

I don’t think the drinks really change the outcome of conversations — to get the lady demon to miss her ex, for example, you’ll have to play the right song on the jukebox, rather than persuade her with conversation choices — but they do prompt slightly different responses from whoever you’re talking to. And, y’know, they’re funny. 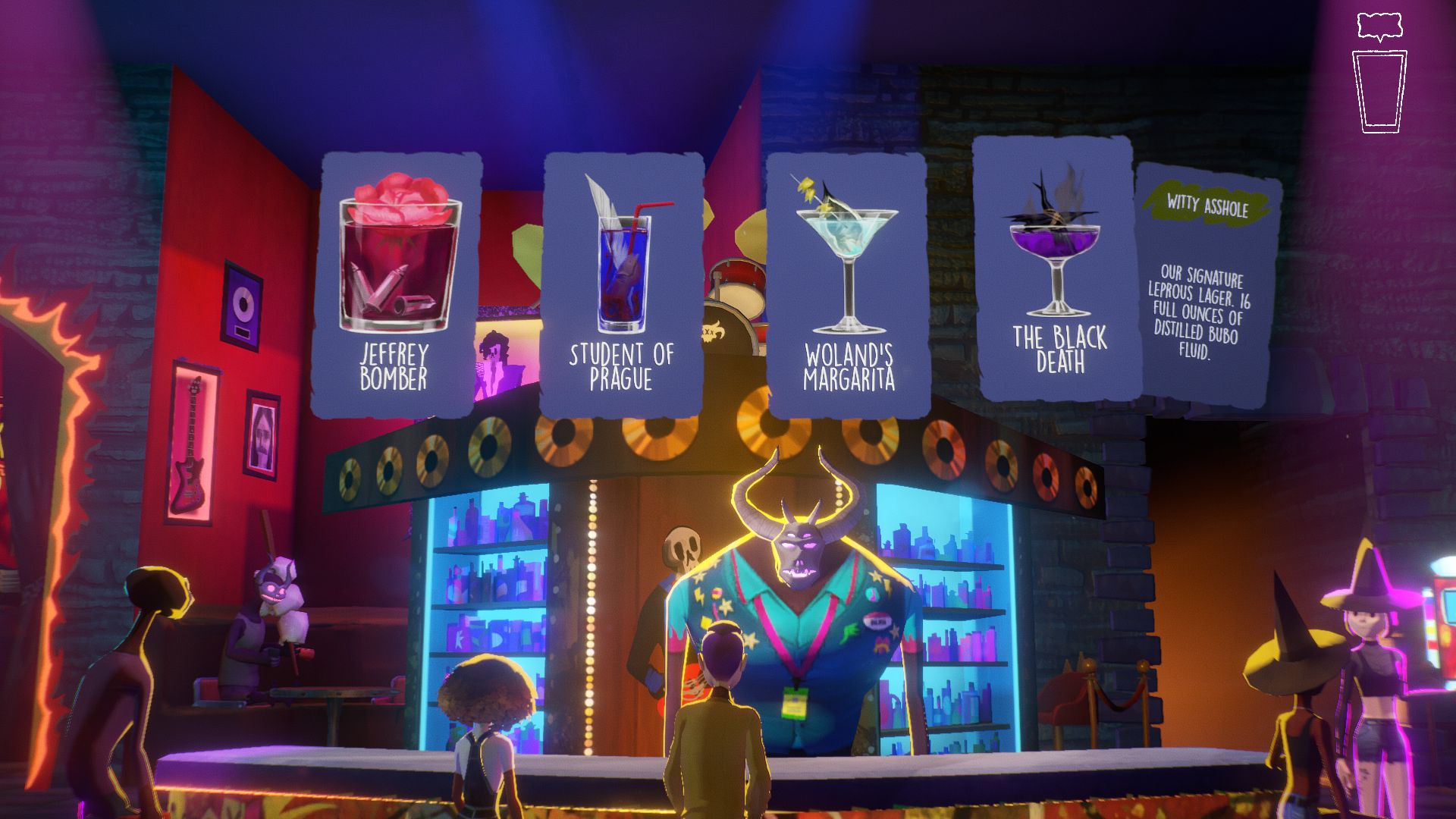 In fact, Afterparty as a whole is surprisingly funny. I did actual out loud laughs sometimes, not just strong exhalations through my nose. Much of the humour comes from contrasting the trad torture version of hell with the mundanity of it being a job for the demons. One newly arrived human is sentenced to have his head used as a tetherball by children “weather permitting”. Then, the demon pronouncing this asks everyone to get a move on, because he wants to get home before his wife nabs the better parking space.

It all works because Afterparty has an exceptionally clear concept, and it’s established from minute one, before being bolstered with details. Demons have glowing eyes and mouths, while humans are gangly waifs who look like background characters from Tintin by way of Jamie Hewlett. The cocktails have weird ingredient lists, the bars all have different music, and hell has a version of Twitter called Bicker.

At the same time, you sometimes find yourself wading into shallow water. Bicker is itself a low hanging fruit joke, exemplary of the least funny bits of the game. For some reason I kept getting a bug that stalled the characters and forced a reload whenever I used lifts. Dialogue frequently bugged too, with characters cutting off in the middle of lines to skip to the next. And while Afterparty upholds Night School’s reputation for writing naturalistic dialogue, it’s “naturalistic” in the same way the term applies to Kevin Smith movies. Almost everyone in hell is witty, self-possessed and supremely assured. Even Milo, who’s characterised as socially anxious, fires off a few rejoinders.

Milo and Lola, their friendship so codependent that they’re sentenced to damnation together, are initially likeable only because of excellent voice acting from Khoi Dao and Janina Gavankar. As time goes by, however, they develop hidden depths. Lola’s brittle self confidence, and Milo’s yearning to be someone he isn’t actually comfortable being, are teased out over the six-or-so hours you spend in hell, mostly in sidebars with their strangely charismatic personal demon Sister Mary Wormhorn. Their personal and interpersonal struggles, mixed up with their complex family backgrounds, play out with an agonising inevitability – but it all still ends up offering a fairly relatable portrait of 20-something existential anxiety. 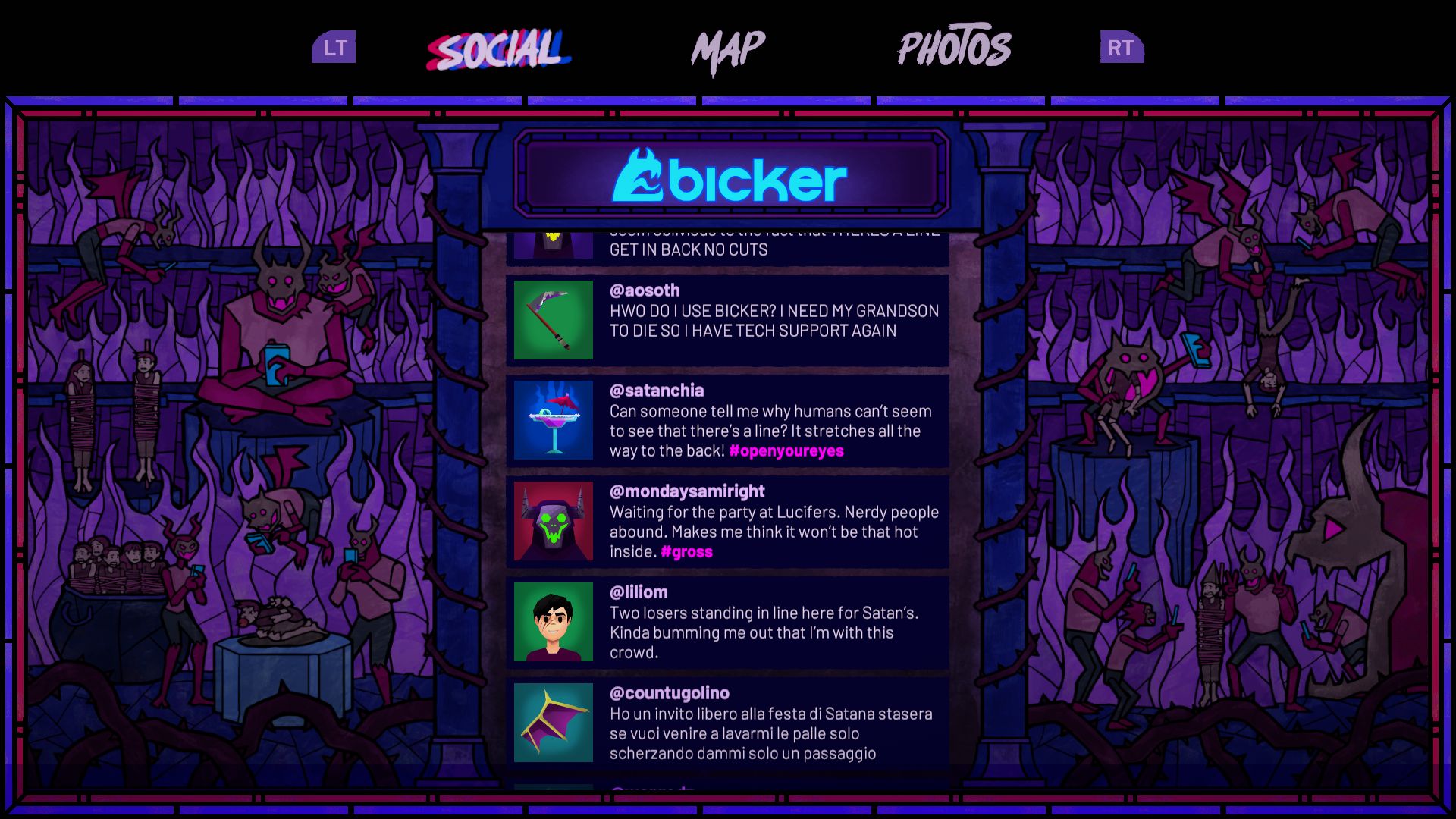 But while all of the principal cast do a smashing job, Dave Fennoy’s Satan is probably the (morning) star of the show. He goes from “Hey, this Satan guy is a pretty cool guy!” to the quiet, friendly menace of a man much bigger than you, insisting the party isn’t over yet. At several points, his speeches to Milo and Lola are also addressing the audience, and his aura of absolute confidence and galactic knowledge at these times gave me a split second of worry that Satan might, in fact, have been real, and talking to me through a game.

This serves as a good contrast to the actual denouement of the game, which involved a twist I didn’t see coming, and I doubt many will. It’s a fitting finale, in a world where you can be sentenced to eternal torture for “repeatedly misusing the express lane in grocery stores.” If that turned out to be reality, Christ, I’d spend all my off hours drinking too. This hell is an Afterparty because everyone is bumbling along in that state of 3am despair, where you started the night pretending you were fine, but now you’re haunted by everything bad you’ve ever done. Except this is forever now, and the breakup you’re trying to get over was with heaven.