Gaming headsets are all well and good for barking at your mates when you’re playing games online, but I’m willing to bet a fair few of you have a separate favourite pair of headphones for listening to music with as well. After all, even the best headsets aren’t often fit to be seen in public, nor are they necessarily compatible with any of your other music devices.

Wouldn’t it be great, though, if you could just use those favourite headphones of yours for absolutely everything? Enter the Antlion ModMic Wireless, a detachable microphone accessory that can snap onto any kind of headphone without the need for any pesky wires. Here’s wot I think.

Of course, a large part of the ModMic Wireless’ appeal will depend very much on your willingness to deface your best pair of headphones with its small magnetic base. This is how the ModMic attaches to your headphones, and you’ll need to stick it to the side of the left ear cup in order for it to work. It’s pretty tiny, all told, but its shiny metal surface is definitely noticeable enough to draw the eye. If I saw one on the train, for example, I’d wonder what the hell was stuck onto the side of that nice pair of headphones.

Get over that hurdle, however, and the ModMic Wireless is pretty darn fantastic. For starters, it couldn’t be easier to set up. My review sample was already paired with its USB receiver out of the box, so all I had to do with plug the receiver into my PC, stick the base onto an old pair of headphones, snap the ModMic into place and press its nice big button to turn it on. No drivers or software required. I’d suggest bending its mic arm round before you put your headphones on, though, as the magnet isn’t quite strong enough to stay in place while you’re tugging it into the right position.

You can press the power button again to mute the microphone, and a handful of LEDs around said power button gives you a nice indication of its current battery life and pairing status. Naturally, you won’t be able to see any of these when you’ve got the headphones on, but fortunately Antlion have thought ahead in this regard by adding three identical LEDs onto its USB receiver. You’ll obviously still need a clear eye-line to your PC for this to be any use, of course, but luckily Antlion have a solution for this as well in the form of a bundled USB extension cable. It’s not massively long, but it should be plenty for sneaking the receiver up onto your desk and popping next to your monitor stand.

There’s a small switch next to the microphone itself that lets you swap between being a uni-directional mic and an omni-directional one. The former brings a bit of extra noise-cancelling to the table for when you’re in a slightly noisier environment, while the latter opens up the mic’s frequency range for higher quality recordings, giving you plenty of versatility depending on your environment. 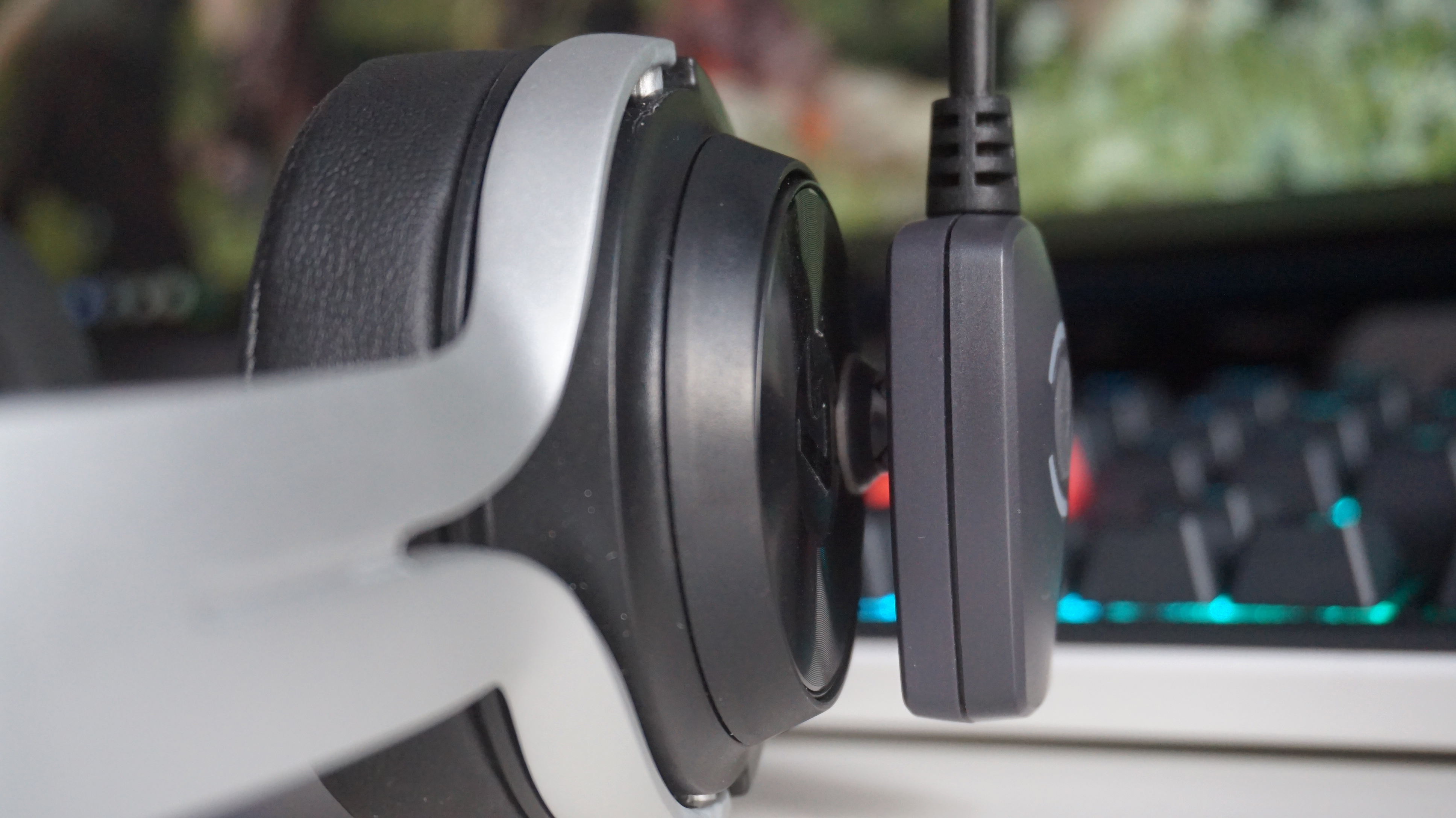 The ModMic Wireless has a battery life of 12 hours, which isn’t massive, but should be more than enough for any online gaming session. Plus, you can carry on using it while it’s charging, too.

And man alive is it an impressive microphone. On the hardware side of things, it’s got exactly the same technical chops as the popular (and standalone) Blue Yeti mic, including a full 16-bit, 48kHz signal with a frequency response range of 20Hz to 20kHz. Its aptX Low Latency codec also means it’s five times faster than your standard Bluetooth device, according to Antlion, giving it a latency of just 34ms as opposed to a more typical 150ms. Admittedly, I have no way of testing such a claim, but in day-to-day use I have to say it felt pretty darn responsive. At no point was there any discernible delay between what I was saying and it appearing as a spiky line in Audacity, and that was regardless of whether I had it set to omni-directional or uni-directional.

The sound quality was absolutely fantastic, too. Leaving it in its default omni-directional mode to start with, there was no background hiss whatsoever when I recorded myself talking in Audacity, and I was able to hear every word loud and clear. Even plosive words didn’t send the volume spiking or cause unnecessary wind effects to be introduced, nor did any big, breathy sighs. Instead, everything came out crisp, clean and very natural, putting other headset microphones I’ve tested to shame – and that includes the Logitech G Pro X‘s built-in Blue Voice tech as well.

The ModMic Wireless’ uni-directional mode was a little less impressive, admittedly, but it’s still considerably better than what you’d get on a standard gaming headset. Everything was still lovely and clear and no sign of any kind of background hiss, but my voice did sound a fraction more artificial here, and those pesky pop effects were a tad more prevalent as well. That said, it’s definitely got better noise cancelling than the omni mode. To test this, I recorded a bit of chat while playing a bit of music on my laptop a couple of metres away, and the ModMic’s uni-directional mode did a noticeably better job of cutting it out than its omni mode. It didn’t get rid of it entirely, but if you’re gaming in a noisy living room it should at least help to cut down on any extraneous background noise.

As well as a carry case, the ModMic Wireless also comes with a micro USB charging cable, a USB extension cable, a spare base clasp and foam pop filter, and an alcohol wipe for cleaning the surface of your headphones with.

All in all, then, there’s plenty to like about the ModMic Wireless. It’s by far the best headset microphone I’ve ever tested, and it’s definitely a lot more convenient than having a big Blue Yeti plonked on your desk. The only potential problem is the price. At £105 / $120, the ModMic Wireless costs just as much as a full-blown gaming headset these days, so its appeal really comes down to how much you don’t want to have another pair of headphones knocking around. Indeed, the excellent Logitech G Pro X is only a teensy bit more at time of writing, going for £110 / $130, whose detachable mic is second only to the ModMic Wireless. It’s also not that much cheaper than a full-blown Blue Yeti, either, which can currently be had for around £120 / $130, and can be used for more things like multi-person podcasts in addition to streaming and playing games online.

I should point out that the ModMic is also available in a cheaper wired USB version and a 3.5mm analogue model, but these involve snaking a wire down the same one coming out of your headphones / headset, making them a little more cumbersome overall.
Still, if you simply don’t want to give up your current pair of headphones or you have a headset whose built-in mic is better off in the bin, the ModMic Wireless comes highly recommended.