If you want total excess at its most attractive then you’ll want Serious Sam 3, but frankly it takes far too long to get going. Serious Sam HD, meanwhile, embraces cray-cray early on. Some say it’s a welcome return to the just-get-on-with-it carnage of early shooters such as Doom, but really Sam is a law unto himself. Huge open spaces, huge enemies, huge weapons: it passes all the way through parody and comes out the other side as something pure and earnest. Are you shooting? Are you moving? Are you shooting and moving? Are you emitting a low, sustained scream? If not, you are not playing Serious Sam. Early Call of Duties had their infinite waves of enemies, but that micro-second to micro-second ferocity just isn’t there in anything else. This is bullet hell shump as FPS, a wild dance of breathless persistence. And every time you think it’s gotten as big as it can, it gets bigger.

Notes: There are now more Serious Sams than you’ve had hot dinners, most of which are different versions of the first game. You could get Serious Sam HD Gold instead, which includes The Second Encounter HD and assorted DLC.

Where can I buy it: Steam. Alternatively, GOG has the archaic non-HD version if you want to do the DRM-free thing.

What else should I be playing if I like this: Doom, if you want just-getting-on-with-it shooting that won’t see you grind your teeth to paste with the intensity of it all. Or there’s Painkiller if you want a more latter-day take on traditional shooter values, but without Sam’s shouty craziness. 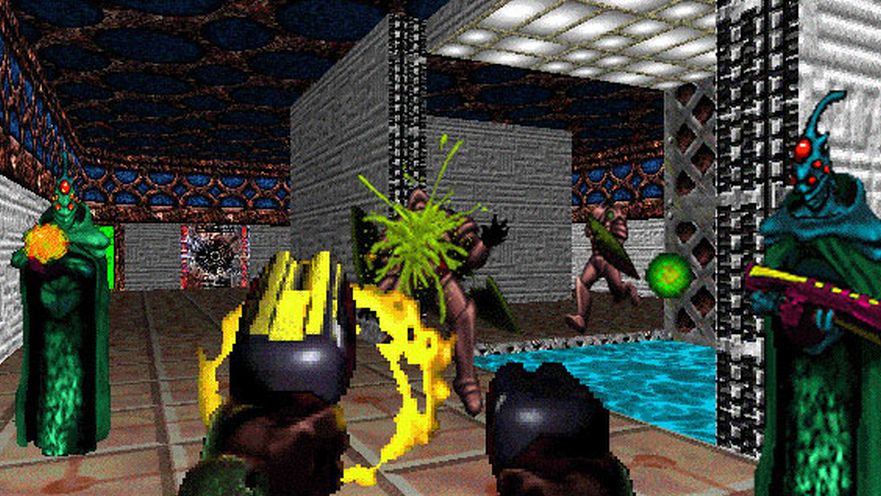 It seems openly bizarre that a first-person shooter from Bungie, they of the Halo series, should be considered even vaguely obscure, but that’s where we are. The Marathon games were hugely influential, but never enjoyed anything like the zeitgeist moment that Doom, Quake or Duke Nukem 3D did. Part of that is for another absurd-in-hindsight reason – it was initially released for Apple Mac rather than PC, and ended up overshadowed by all the flashy fare on what was then an infinitely more popular platform.

But Marathon was groundbreaking, taking the Wolfenstein 3D and Doom formula and pinning a proper story to it for the first time, as well as giving us vertical axis aim, dual-wielded weapons and massive progress in multiplayer, physics and optional objectives. No, it doesn’t still sing in the way Doom does, but you can draw a direct line from almost everything it does to what Halo does, and various open source remakes keep it in good, satisfying shape to this day.

Where can I buy it: Download for free from Bungie themselves. Though again, you probably want to stick the files into Aleph One (see above).

What else should I be playing if I like this: Halo, if you want to experience a similar story and some of the mechanics in far flashier fashion. Or perhaps Blood if you want an evolved version of the Doom concept but without the lore crap. 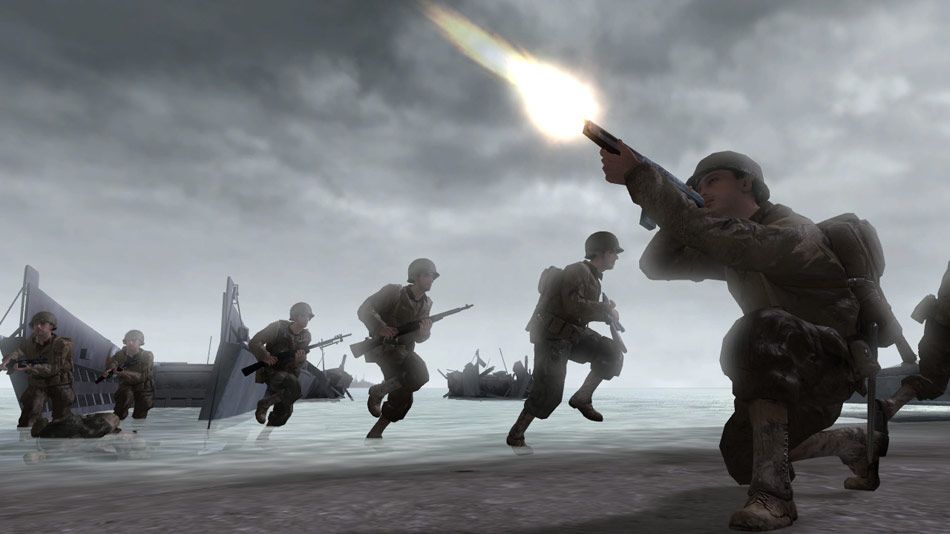 Band of Brothers, Saving Private Ryan and Enemy At The Gates were go-to touchstones when Call Of Duty 2 was made, resulting in a game with no less bombast than its bug-eyed modern-day successors, but a slightly more elegant tone with some of its mind on sadness as well as spectacle. This is a military shooter about soldiers rather than action heroes (though brutal realism it most certainly is not), and that’s made particularly clear in the near-traumatic Russian segments of the campaign. With often large and open environments and not too much in the way of cutscenes or bossy NPCs (though one of the earliest incarnations of Captain Price does crop up), it’s still a lesson in how to create a battlefield rather than a superheroic sprint.

Notes: It was particularly tough to decide between this and the first Call of Duty. 2 has endured the ravages of age more, but its introduction of regenerating health is a sore point for many, not to mention that in some respects it’s ‘just’ a glossier retread of 1’s fine work – especially in terms of the multi-protagonist setup and the harrowing Russian campaign.

Where can I buy it: Steam, while the App Store has the Mac version (as does Steam).

What else should I be playing if I like this: Arma or Red Orchestra/Rising Storm if you want more realism, or there’s Gearbox’s Brothers In Arms series if you want more Saving Private Ryanisms.

A lovely spoof of the James Bond genre, with its gender-flip, gleeful nicking of Flemming’s gadgets, vehicles and plot structure. Cate Archer makes for an excellent protagonist, peculiarly snooty and unlikeable in some ways, while defiant and ass-kickingly pleasing in others. The pleasure of using gadgets to approach situations in your own chosen way is immense, with a good mix of stealth, action, driving and story. Flavours of Hitman, Deus Ex and Austin Powers made for an interesting cocktail. One that really worked and still impresses with its uncommon inventiveness and wit even now. Shooters imbued with comedy to anything like this extent were rare then, and even rarer now.

Notes: 2002 sequel No One Lives Forever 2: A Spy in H.A.R.M.’s Way is also a treat, but standalone expansion/prequel Contract J.A.C.K., which threw out most of the spy stuff in favour of shooter conventions (including generic gruff man protagonist, allegedly to help sales) should be avoided like 14 types of plague.

Where can I buy it: The rights are tied up in a knot no-one can (or wants) to untangle, so second-hand’s your only strictly legal recourse. However, some would suggest putting on your peg leg and fetching patch. Naughty.

What else should I be playing if I like this: Hitman does gadgets and stealth impeccably well, and even weaves absurdist and slapstick humour into its assassination vignettes. Or there’s Dishonored for a more flexible and serious (yet fantastical) approach to the gadgety stealth shooter. 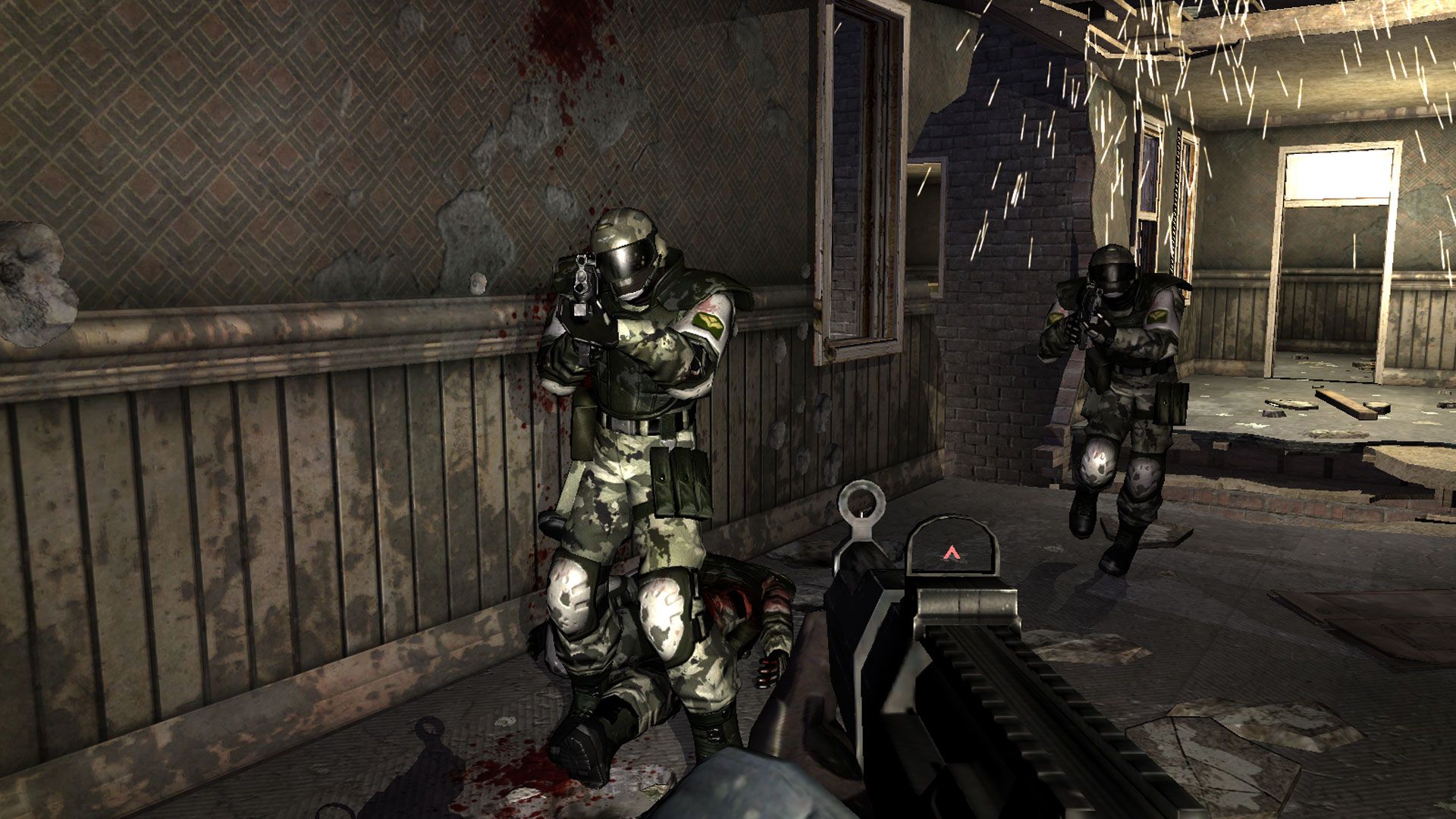 This horror/action hybrid lost some of its lustre as a result of the series increasingly disappearing up its own plot-rectum, but it’s important to push J-horror tropes and everyone-is-related-to-everyone blather aside and look at what F.E.A.R. brought to the shooter table. So often, this genre is just about what a pair of hands do, but in F.E.A.R. so much more of your character’s body was involved. The reason we don’t see much first-person kicking is that it’s very hard to get it right, due to the innate preposterousness of a pair of legs appearing somewhere near your nose. F.E.A.R. got it right. Is such a physical-feeling game. It also pre-empted Mirror’s Edge by making the visible body related as much to movement as it was to combat. As a gun game, it was also an early proponent of the idea that any weapon can be equally deadly in the right circumstance, which is still a refreshing move on from the arms race of most shooters. Also, spooky little girl with hair over her face wooooooooooooooooo.

Notes: Everyone bangs on about Source’s deathlessness, but the Lithtech Jupiter EX engine created for 2005’s first F.E.A.R. still more or less lives on too, having been used in 2012’s Gotham City Imposters and modified for Shadow of Mordor. It, er, doesn’t exactly look bang-up-to-date in F.E.A.R, though.

Where can I buy it: It’s sitting pretty on Steam, though sadly the multiplayer has been deactivated because someone was dumb enough to base it around Gamespy.

What else should I be playing if I like this: The Condemned games if you want more spooky horror-times mixed in with your action, or No-One Lives Forever if you want to see more from developers Monolith.

Read more: The origins of Fear.