This is a series which has been all over the place, kicking off with a Wild West setting and an ambitious dual-protagonist setup, then selling its soul for the mean-spirited, present day-set The Cartel. It was the cut-price Gunslinger that hit the sweet spot though, pairing crunchy frontier shooting with a rich sense of irony about it all, but which doesn’t devolve into snark or hypocrisy. Gunslinger doesn’t take aim at other shooters – it stars a protagonist prone to boasting, so an absurd fight with a hundred men is justified as him telling a tall tale. He’s also prone to distraction, so the action occasionally spins out into strange loops as his mind (or body) wanders, or he’ll warp your on-screen reality to better fit his crazy claims. Importantly, all this is him showing off, not the game showing off. It clearly wants to be a good time.

Notes: Gunslinger was made and sold as something of a budget game, so be aware going in that there are compromises. It’s short, the cutscenes look like they were dashed out in an evening and there are unresolved performance issues. The game itself still looks rootin’ tootin’ good, though.

Where can I buy it: Steam or GOG.

What else should I be playing if I like this: Rockstar’s Red Dead Redemption never left its console home but Red Dead Redemption 2 is coming to PC. As a lo-fi, more playful alternative, there’s Westerado: Double Barreled, which brings (slightly silly) life as well as death to the frontier.

Read more: Have you played… Gunslinger? , our Call of Juarez: Gunslinger review 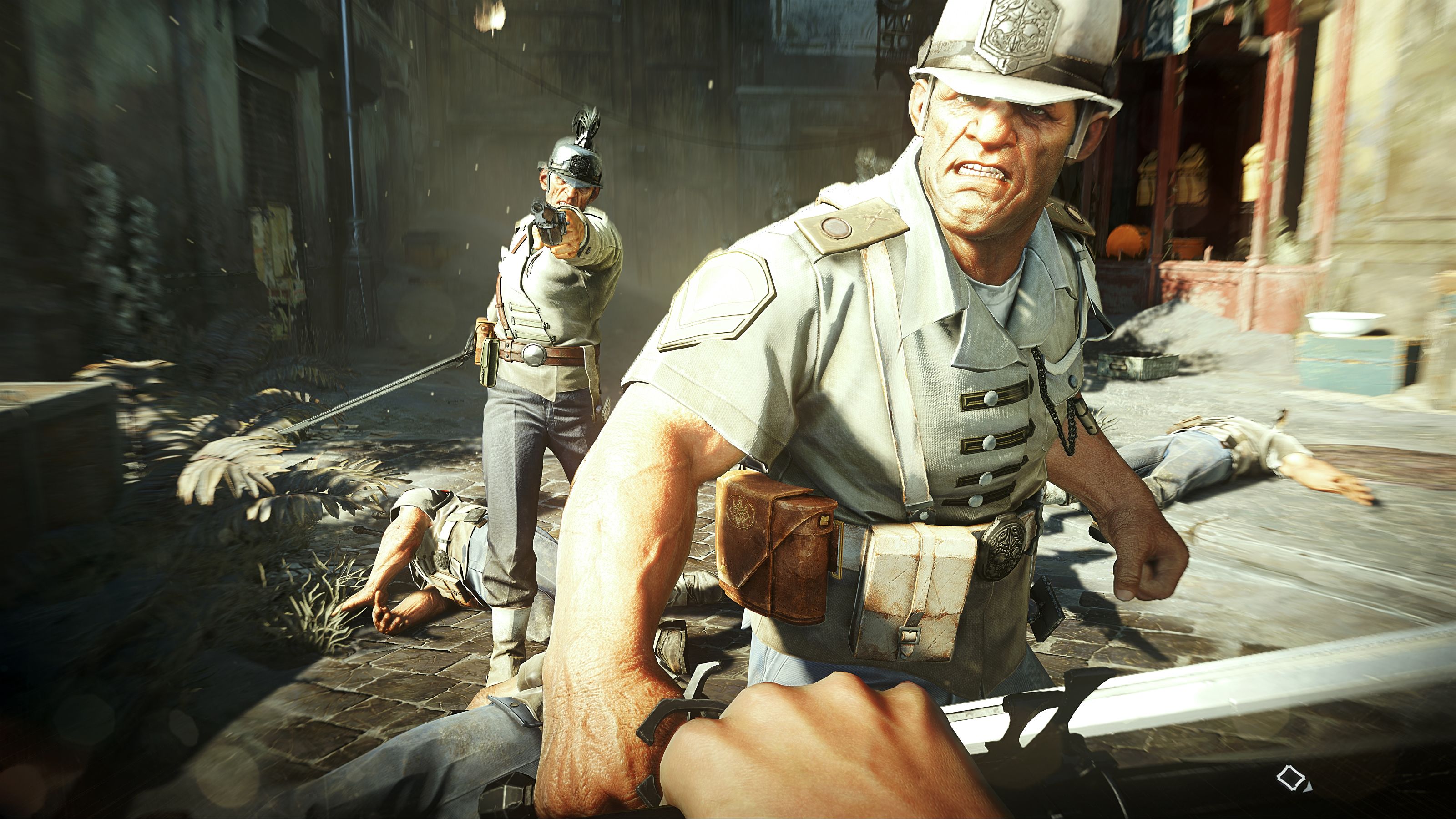 Dishonored 2 is more experimental than its predecessor, most notably in the shifting spaces of the Clockwork Mansion and the altogether different shifts in a later level. To discuss that in detail would be unfair to those who have managed to remain unspoiled. When they do step outside traditional sneaking and stabbing territory, of which there’s plenty, Arkane make sure their ideas aren’t gimmicks bolted onto existing systems. Everything is built on the foundation of movement and observation.

There’s an argument to be made for the first game’s superiority and it’s certainly more tightly constructed in places, but the greatest surprise of Dishonored 2 is that it swiftly banishes memories of Dunwall. The city that felt like it could be home to a trilogy at the very least is only seen briefly, and most of the game takes place in a new city in a new region. Karnaca feels like a new home within a few hours, and by the time the game is over, we know it better than we ever knew Dunwall. Now is the time to scour all of those in-game maps and charts to figure out where Arkane might take us next.

Notes: Has bumped its predecessor from this list. There were internal disagreements about which was truly the best game but we’ve settled on 2 for now.

What else should I be playing if I like this: The Thief series – particularly Thief 2 – which we cruelly removed from this list in favour of a more appropriate stealth one. See also Deus Ex. 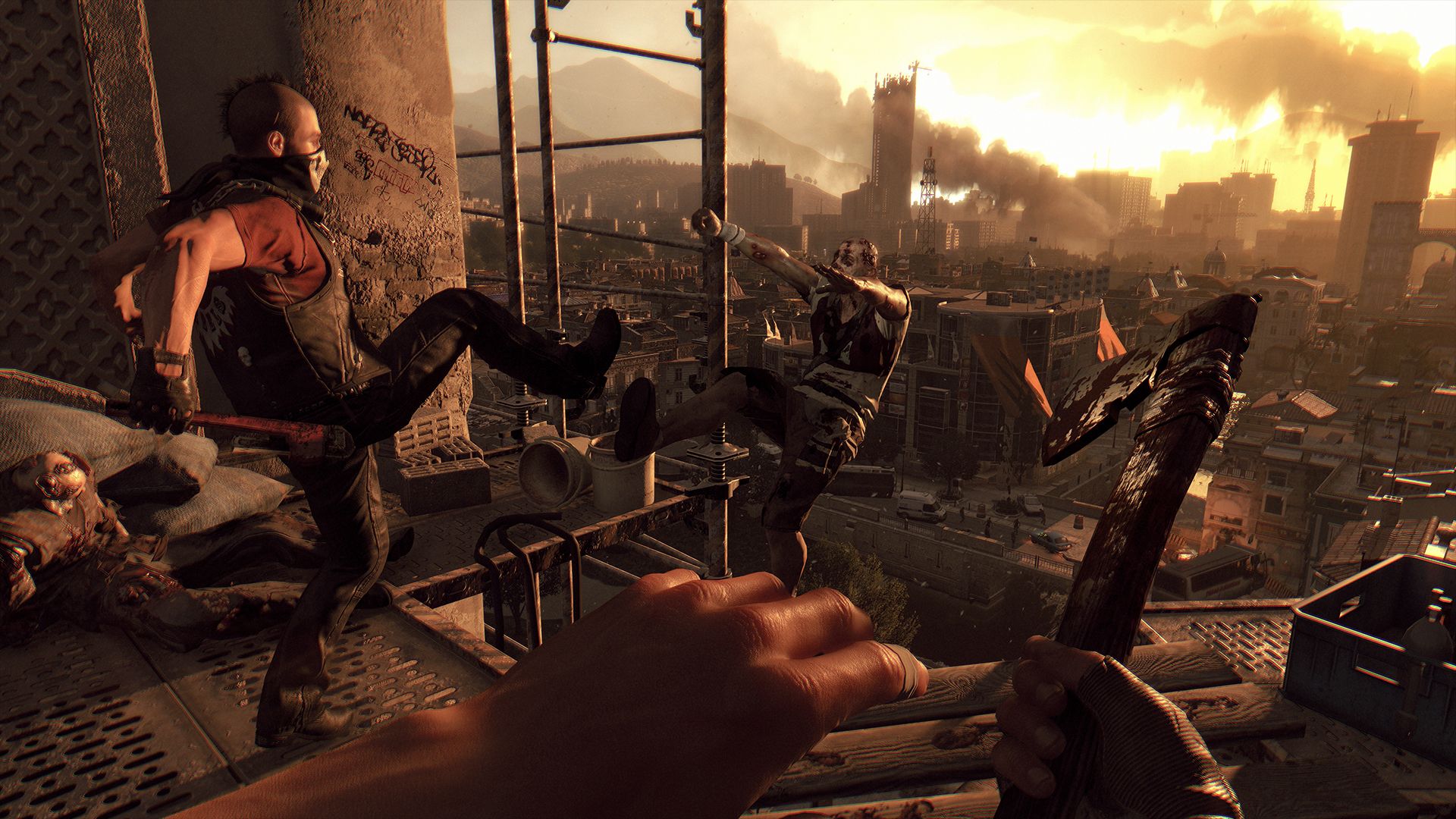 Boot a zombie off a rooftop into some spikes below. Crack his zombie mate around the head with a big pipe. Turn round and dropkick a third decaying shambler soaring across the skyline into a flaming barrel. What an excellent bunch of things you have done. Wait, is it still a first-person shooter if you have not fired a single shot?

Ah, don’t worry, there are some guns in this zombie doomsdayer. It’s just more fun to use your Doc Martin’s, or a baseball bat wrapped in barbed wire. Dying Light is all about sticking the boot in and leaping from rooftop to rooftop. It feels like the result of some enterprising child who was obsessed with pretending the floor is lava. Or someone who looked at stylish parkour ‘em up Mirror’s Edge and said: “What if this, but zombies?” It is an amalgamation of many other games, but it’s a mix-up that works surprisingly well.

Notes: The difference between day and night in the game is noticeable, with scarier baddies coming out to hunt you when the sun goes down. But it’s less of a game-changer than the story suggests. However, the upcoming Dying Light 2 hopes to improve on that.

Read more: Our Dying Light review called it “a fantastic playground for thousands of emergent scenes, from panicked horror to improvised farce.”

What else should I be playing if I like this: Mirror’s Edge is the classic parkour game, but has some frustrations. 7 Days To Die is a good zombie survival game. 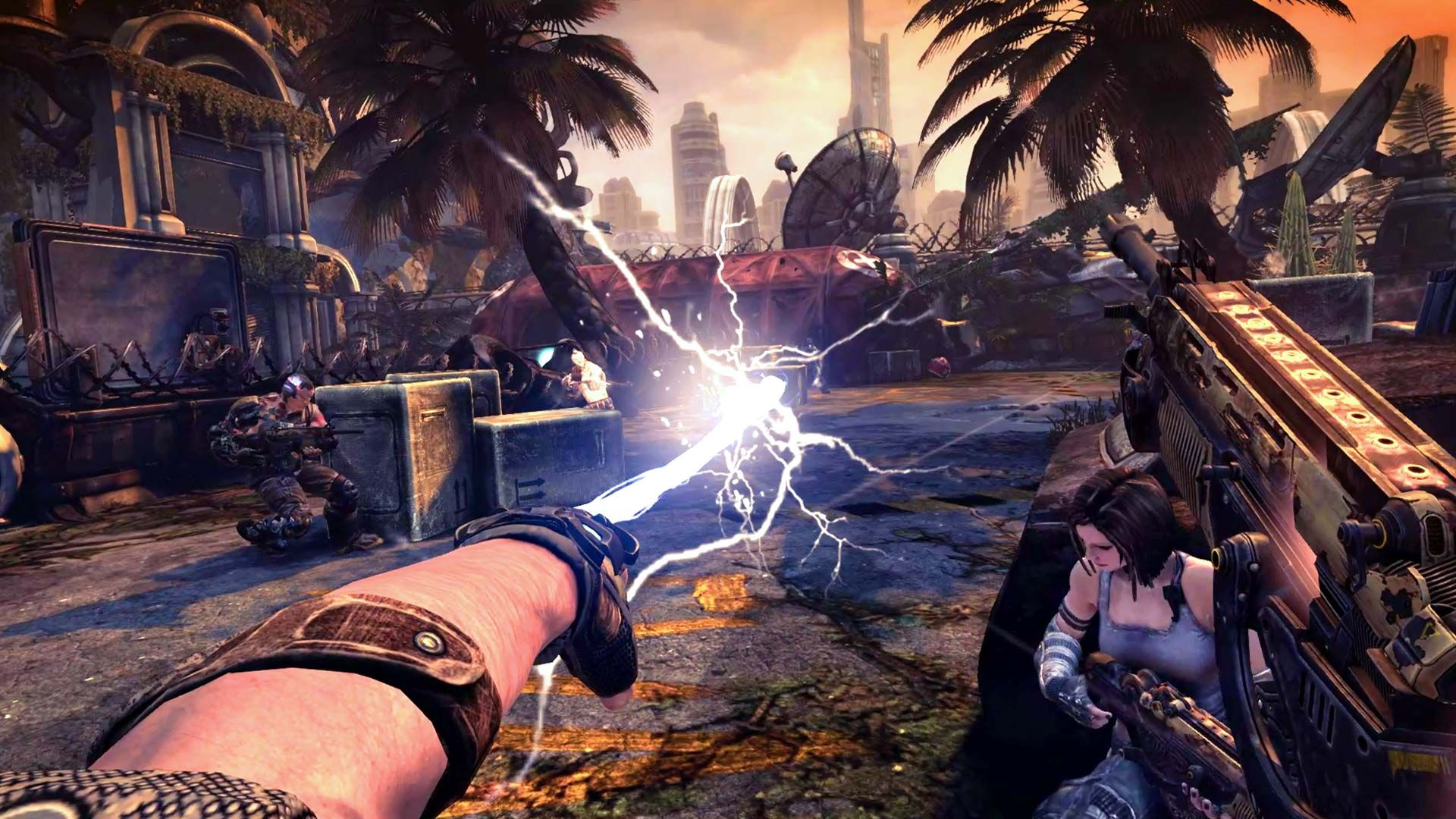 Possibly the most over-the-top shooter ever made (though Serious Sam presents stiff competition) Bulletstorm is a carnival of cartoon sadism. It’s dumb as blind-drunk sheep, but smartdumb, not dumbdumb. It works very, very hard to be dumb. You also have to accept it as just a game about shooting. It’s Time Crisis filtered through Jackass, with these preposterously ornate environments and setpieces attached, plus an almost bizarrely hard ‘skillshot’ system which means shooting someone in the willy isn’t quite as straightforward as it sounds. Also it has lots and lots of dick jokes. The guy who wrote ’em now writes Captain America comics for Marvel. Cap wouldn’t approve of that sort of language.

Notes: Parts of the US media made breathless and unresearched claims that Bulletstorm’s violence and profanity would traumatise children, encourage sexual violence and generally destroy society. Our own John Walker played a major part in dismantling FOX et al’s uninformed fearmongering on this particular issue.

Where can I buy it: The updated Full Clip Edition is on Steam and Humble.

What else should I be playing if I like this: Serious Sam if you want another FPS that doesn’t take itself at all seriously (apart from on the matter of shooting, of course).

Read more: Have you played… Bullestorm?, The RPS Verdict: Bulletstorm. 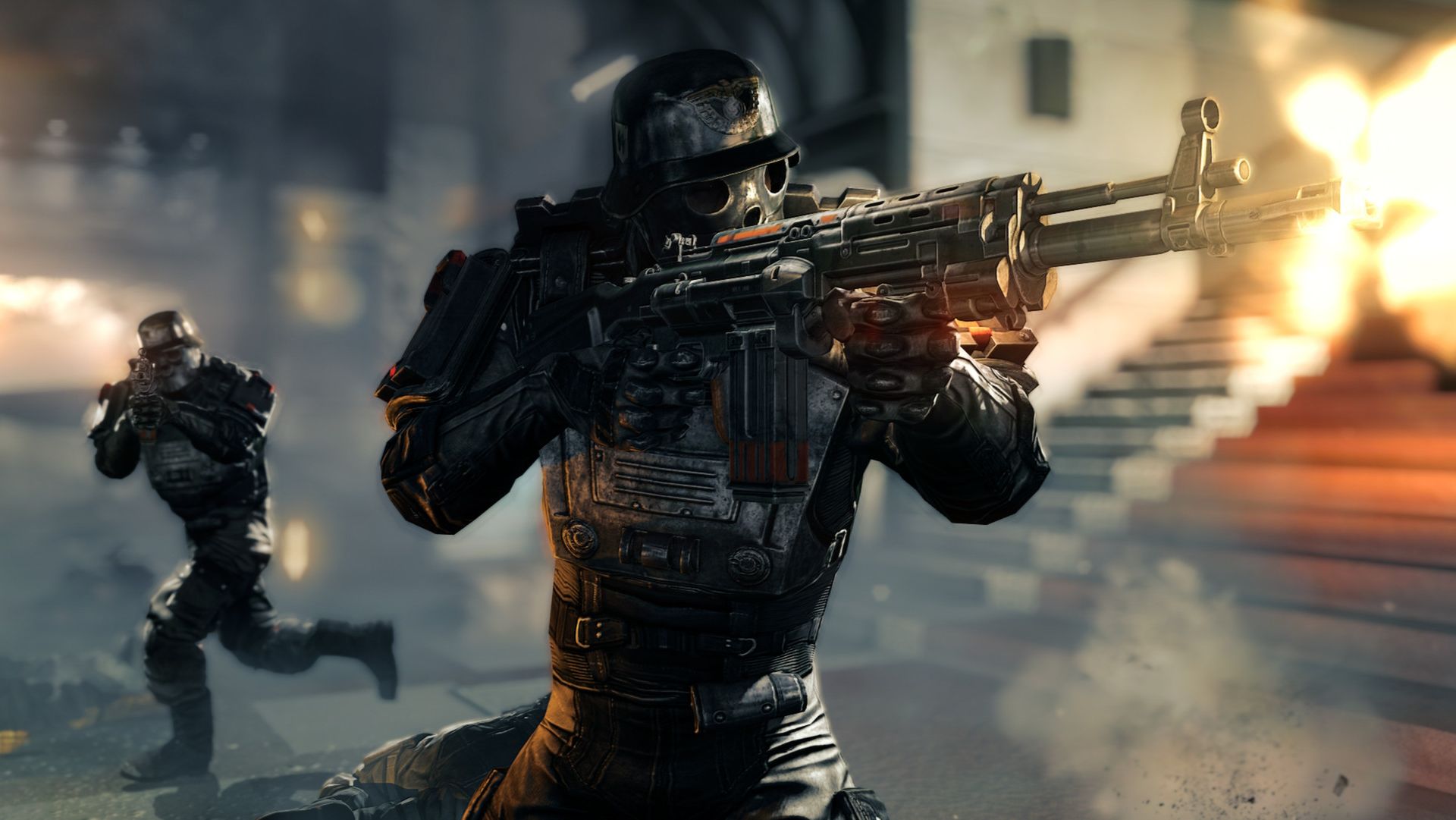 Of everything 21st century in this list, The New Order puts the lie to nostalgia goon claims that shooters ain’t what they used to be. Pairing up pure pulp with surprising heart, then earning both by underpinning the sci-fi gloss and melodrama with super-solid, impressively flexible combat, this alterna-history Nazi-shooter is the complete blockbuster package. The latter-day follow-up to all-time granddaddy of first-person shooters even boasts a stealth option. It takes you to all sorts of wild places too. Some misfire, some are exactly what you’d want, and the result is a shooter which knows exactly what it’s doing, and while it’s too happily dunder-headed to earn the breathless adoration of a BioShock or Half-Life, as a singleplayer action game it just doesn’t compromise.

Notes: Don’t opt for standalone prequel The Old Blood just because it’s a newer game. It’s perfectly adequate as manshoots go, but it doesn’t reach as high as The New Order, in either spectacle or humanity. Wolfenstein II: The New Colossus on the other hand…

Where can I buy it: Steam, Humble, GOG.

What else should I be playing if I like this: Half-Life is a clear inspiration for The New Order, in terms of being another resistance tale with dramatically changing environments. There’s also the earlier Return To Castle Wolfenstein if you want to shoot fantastical Nazis without having to worry about feelings.