I’m just going to come out and say it. The Ducky One 2 is probably one of the best gaming keyboards I’ve ever used. It’s available in a range of sizes and numerous different key cap colours, including a tenkeyless version, a 65% model and the even dinkier Ducky One 2 Mini, but it’s the full-sized RGB model I’ve had on my desk for the last month or so, and it’s by far one of the loveliest keyboards I’ve used in ages. Here’s wot I think.

Of course, a large part of any mechanical keyboard’s appeal comes down to the type of switch it uses, and in this respect the One 2 isn’t particularly special. Like 99.9% of mechanical keyboards out there, the Ducky One 2 comes in a range of Cherry MX switches, from your standard red, blue and browns as well as silent red, black speed silvers. I was sent the silent red version for review, whose keys have a nice, quick, up-and-down feel like your standard red switches, but make slightly less noise overall. They’re nowhere near as ‘silent’ as their name suggests, but they’re certainly a lot easier on the ears than a lot of other CLACKY MX types.

Naturally, as with most MX switches, they’re a great fit for gaming and typing alike. Despite the Ducky One 2 having no specific gaming mode option available, it handled my Monster Hunter: World keyboard mashing with aplomb, responding instantly to both my frequent dodges out of harm’s way and my hammering of the WASD keys as I closed in for another attack. Their clean, linear motions were also great for typing up long word documents, too. Each key provided excellent tactile feedback, and I was able to get up to full typing speed almost immediately. 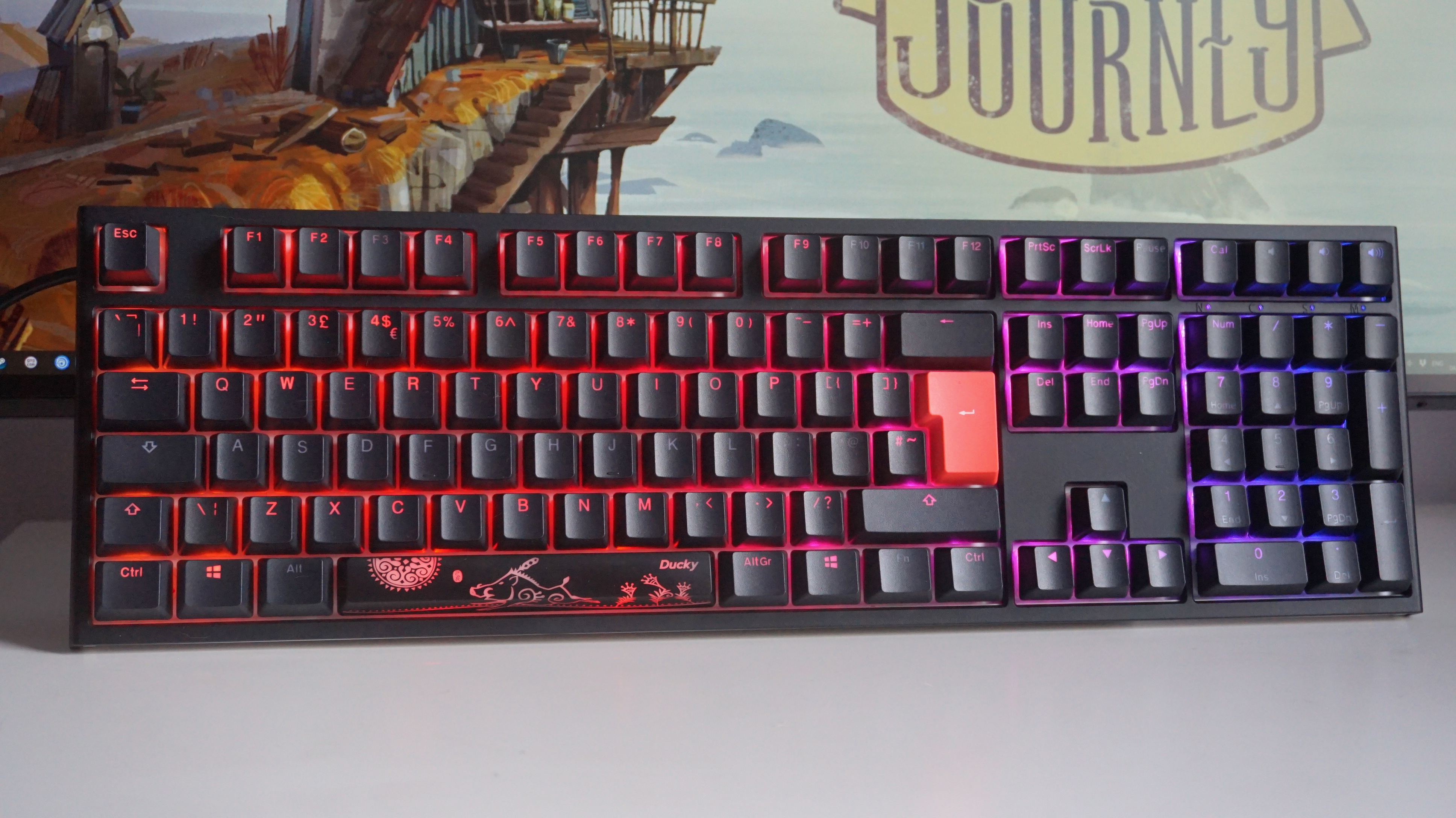 This is pretty expected when you’re dealing with Cherry’s MX switches, of course, but the Ducky One 2 is so much more than just another Cherry keyboard. For starters, it’s got one of the most unassuming designs I’ve seen in yonks, from its elegant lettering to its simple black and white chassis (which I must say goes surprisingly well with its striking pink Enter key and accompanying pink spares). Ducky have kept it completely free of all logos, too, instead confining it to the rear of the keyboard so it’s out of sight during everyday use. Even the decorative Year of the Pig space bar that came with my particular model can be swapped out for a completely plain black one thanks to the abundance of spare key caps that come in the box.

I also love the fact that its USB-C cable is both detachable and can be funnelled off to the right or left-hand side of the keyboard instead of simply snaking out the top of it. The former means it’s easy to replace if, say, your cat decides it looks like a tasty rat tail and gives it a good old chew, while the latter helps to keep your desk a bit tidier. I’m also a big fan of how its flip-out feet have two different heights built into them. It all makes for a more flexible and versatile type of keyboard that’s even more pleasant to use regardless of whether you’re playing games or just doing a bit of general typing. 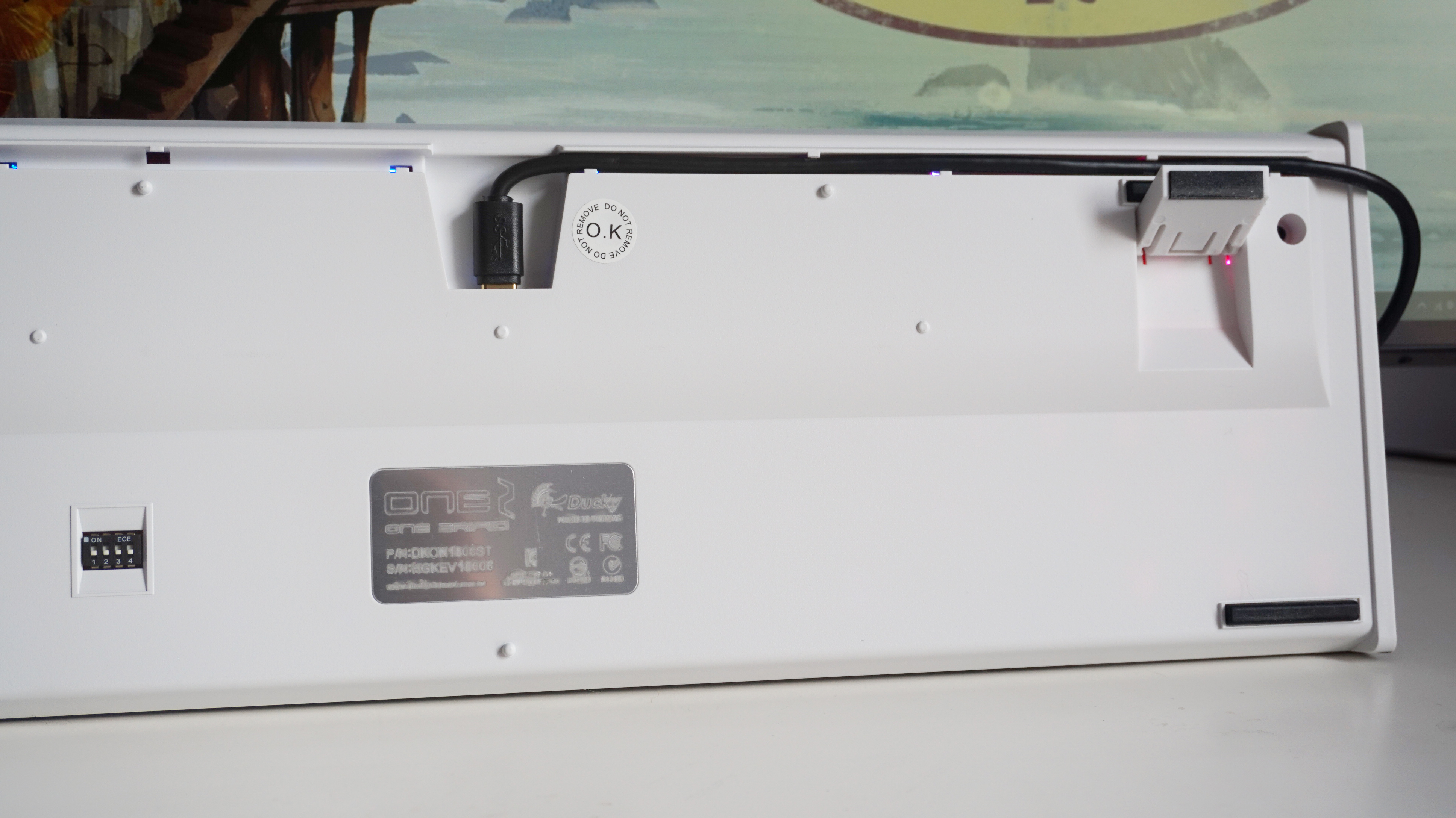 There are, admittedly, a few things it lacks. There’s no USB passthrough, for example, which is something you might expect from a £150 / $130 mechanical keyboard. Similarly, the only dedicated media keys it has are a mute key and volume up and down buttons. If you want to use it to play, pause or skip music tracks, for example, then you’ll have to memorise the series of keyboard shortcuts available in its user manual, as Ducky’s free software program only lets you change its RGB lighting. The same goes for recording macros, which is a pain when so many other mechanical keyboards out there let you do all this in their respective software programs.

I also wish the four LED lights that let you know when things like Caps Lock and Number Lock are enabled were a bit more visible as well. From my normal viewing angle, for example, I can just about see the light from their bright, white LEDs reflecting off the dark key caps that are located above them, but even that can sometimes get a bit lost depending on the RGB profile you’ve got enabled. It’s not a huge bugbear, admittedly, but I imagine it will be a much bigger problem if you go for one of Ducky’s lighter One2 keyboard models that come with white key caps instead of black ones. 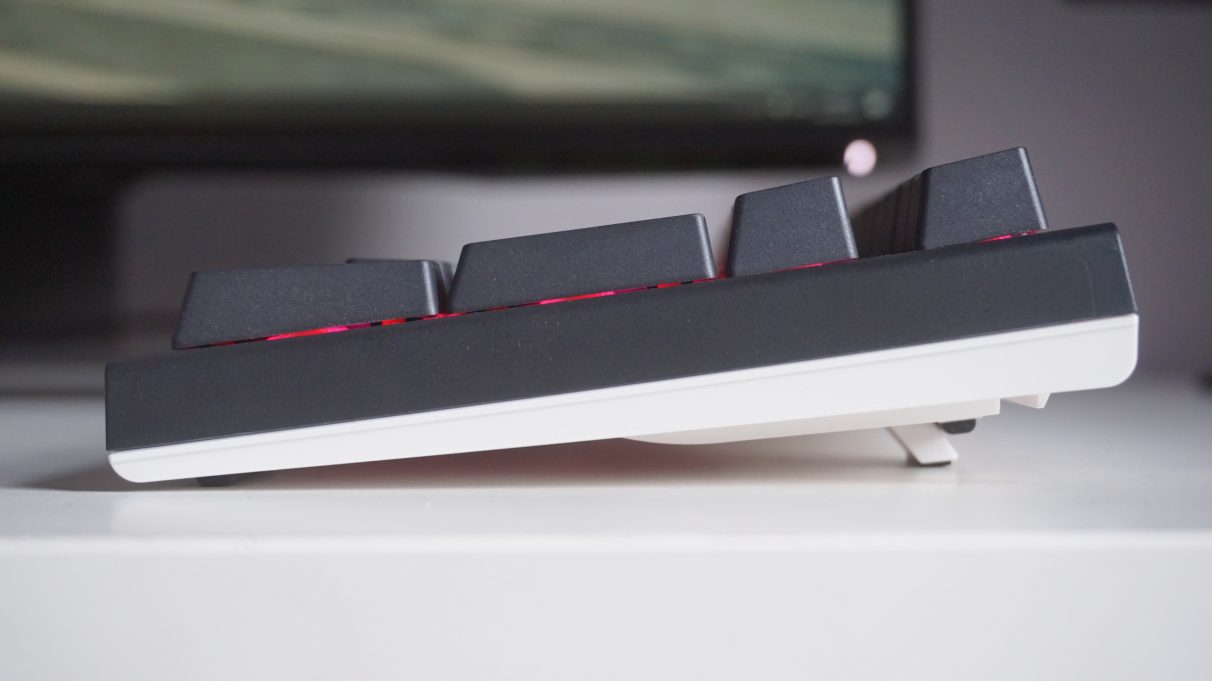 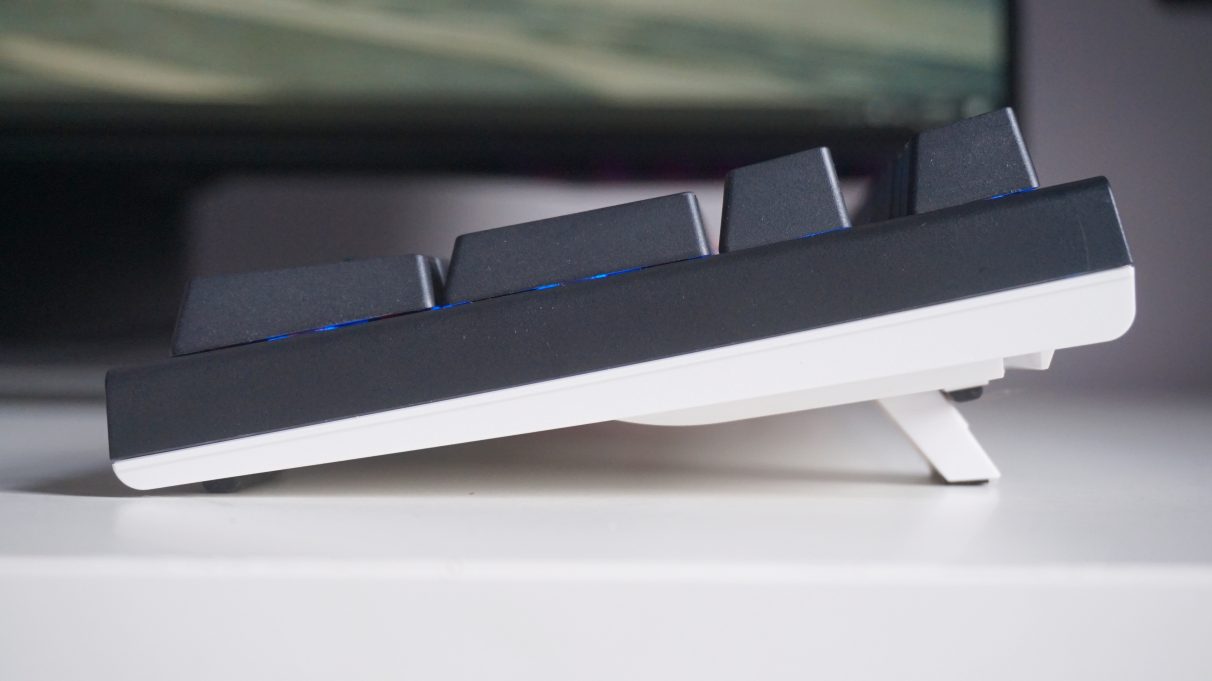 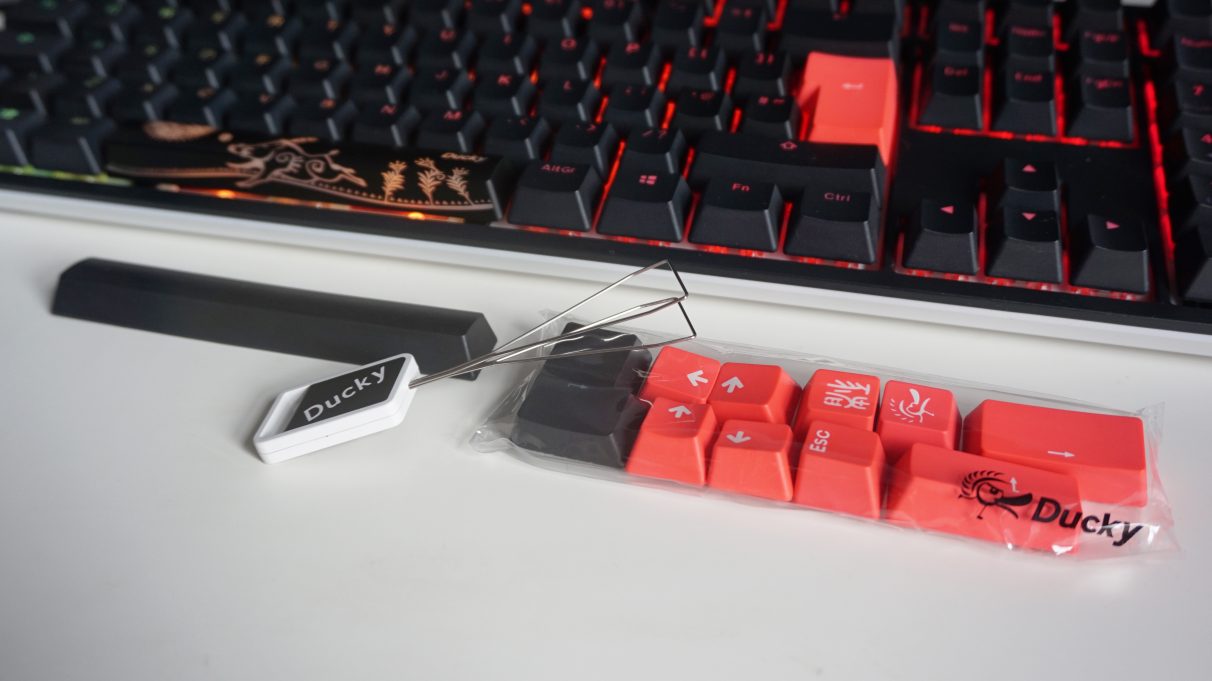 Spare keys, space bar and a key cap puller all come in the box. 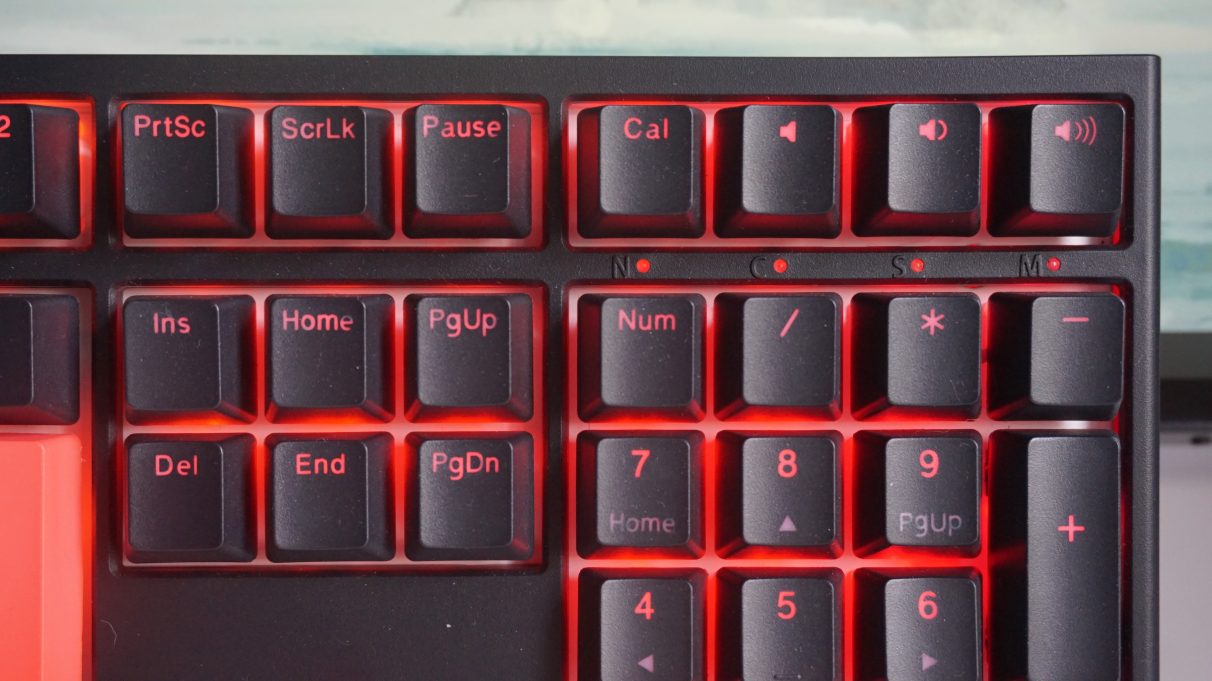 Next to the mute and volume keys, you’ll find a
sweet, sweet Calculator key…


Still, the one thing I do very much appreciate is its dedicated calculator key. This is a god-send for folks like me who are forever searching for it in Windows whenever I need to work out benchmark percentages and the like, and it’s something I wish every keyboard came with as standard. It’s a niche thing to get excited about on a keyboard, to be sure, but I love it all the same.

Likewise, I’m normally highly averse to anything vaguely pink coloured, but I’ve grown increasingly fond of the One 2’s colourful, alternate key caps, too. They add a bit of flair without resorting to the usual gaudiness of gaming keyboards, and the fact that Ducky offer so many different colour key cap combos within their One 2 range (such as the very fetching Good in Blue and red, white and blue Bon Voyage edition) just makes it feel that bit extra special.

The Ducky One 2 isn’t perfect, then, but ultimately there’s still a lot to like here. At £150 / $130, it’s hardly the cheapest mechanical keyboard out there, but it does a lot to justify its high price. Its Cherry MX switches are a joy to type on, and its colourful, yet modest design is a breath of fresh air compared to many of its other similarly priced mechanical rivals. My current best gaming keyboard champ, the Fnatic Streak, is probably still better value for money overall compared to the Ducky One 2 (if only because it comes with USB passthrough and the world’s comfiest wrist rest for even less at £120 / $110), but personally, I’d rather stick with the Ducky.