Now streaming live:
This is The Mechanic, where Alex Wiltshire invites developers to discuss the difficult journeys they’ve taken to make their games. This time, Magic: The Gathering Arena [official site]’s Throne of Eldraine expansion.

Mark Rosewater has been head designer on Magic: The Gathering since 2003, overseeing the creation of thousands of new cards in the collectible card game that spawned them all. Among 269 new cards in Magic’s latest expansion set, Throne of Eldraine, some tell the tale of Jack and the Beanstalk. Others feature pie-baking and big bad wolves, and some spin out Arthurian legends. All together, they form a densely intricate game of attack and defence, playable both as physical cards and in Magic: The Gathering Arena.

Eldraine is product of a remarkable design machine which somehow spits out a similar set of new cards every three months, so I asked Rosewater how it works. “Later this year, I’ll celebrate my 24th anniversary working here at Wizards on Magic,” he says. “People always ask, ‘Don’t you get bored? How can you do the same thing for 24 years?’ And I’m like, well, every set is almost its own game.” 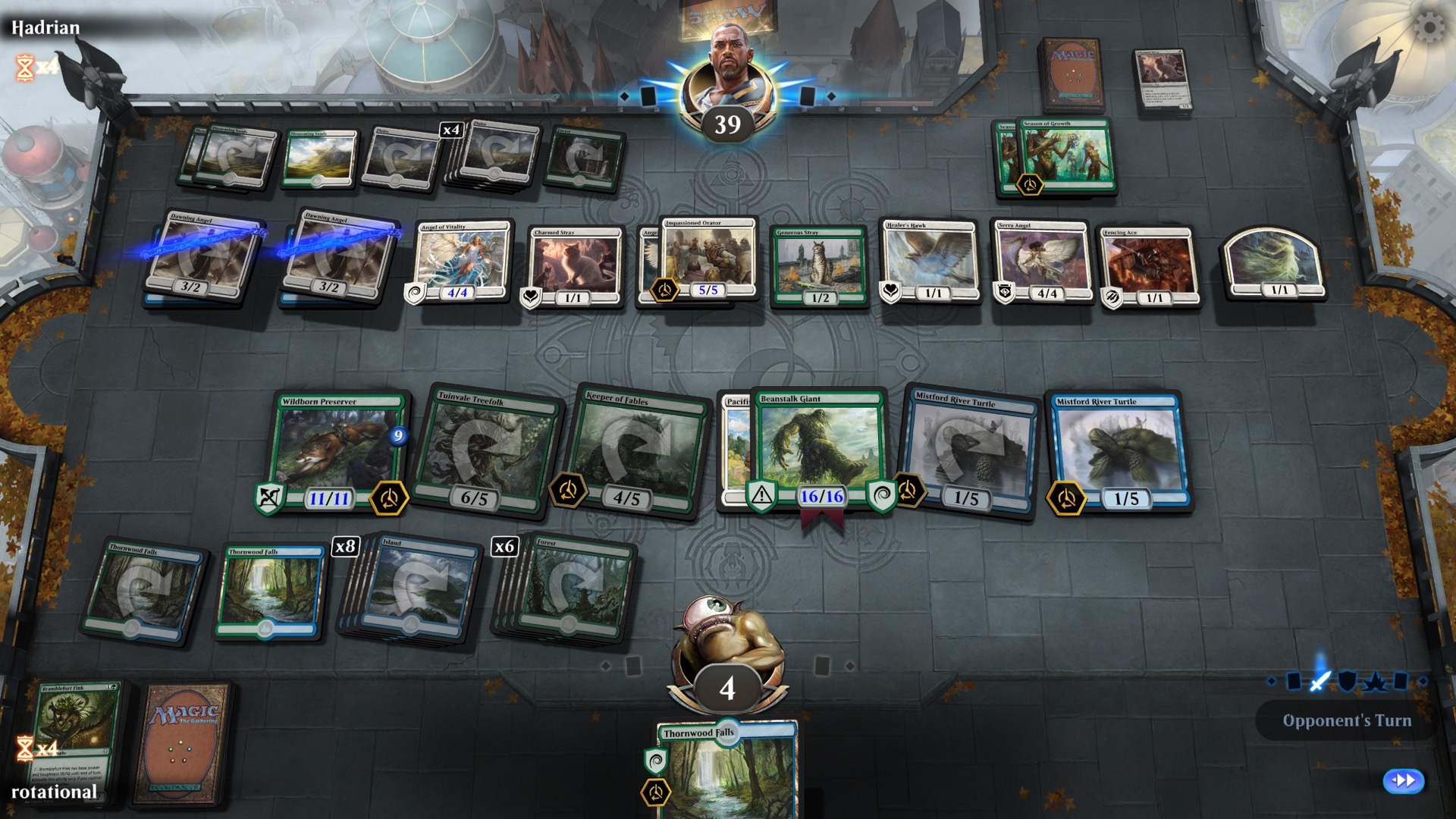 Quick note: If you haven’t played it, I’ve written a very quick guide to how Magic: The Gathering works on the second page of this article. It’ll give background on what the heck I’m on about below. It’s not as scary as you might think!

There are two ways to design a Magic set. You can start with a mechanic and then design upwards from there, thinking up a creature or a thing in its world and a storyline that fits. Or you can design it the way Eldraine was designed, what Rosewater calls top-down. This means thinking about the theme first, and then fit mechanics to what emerges. 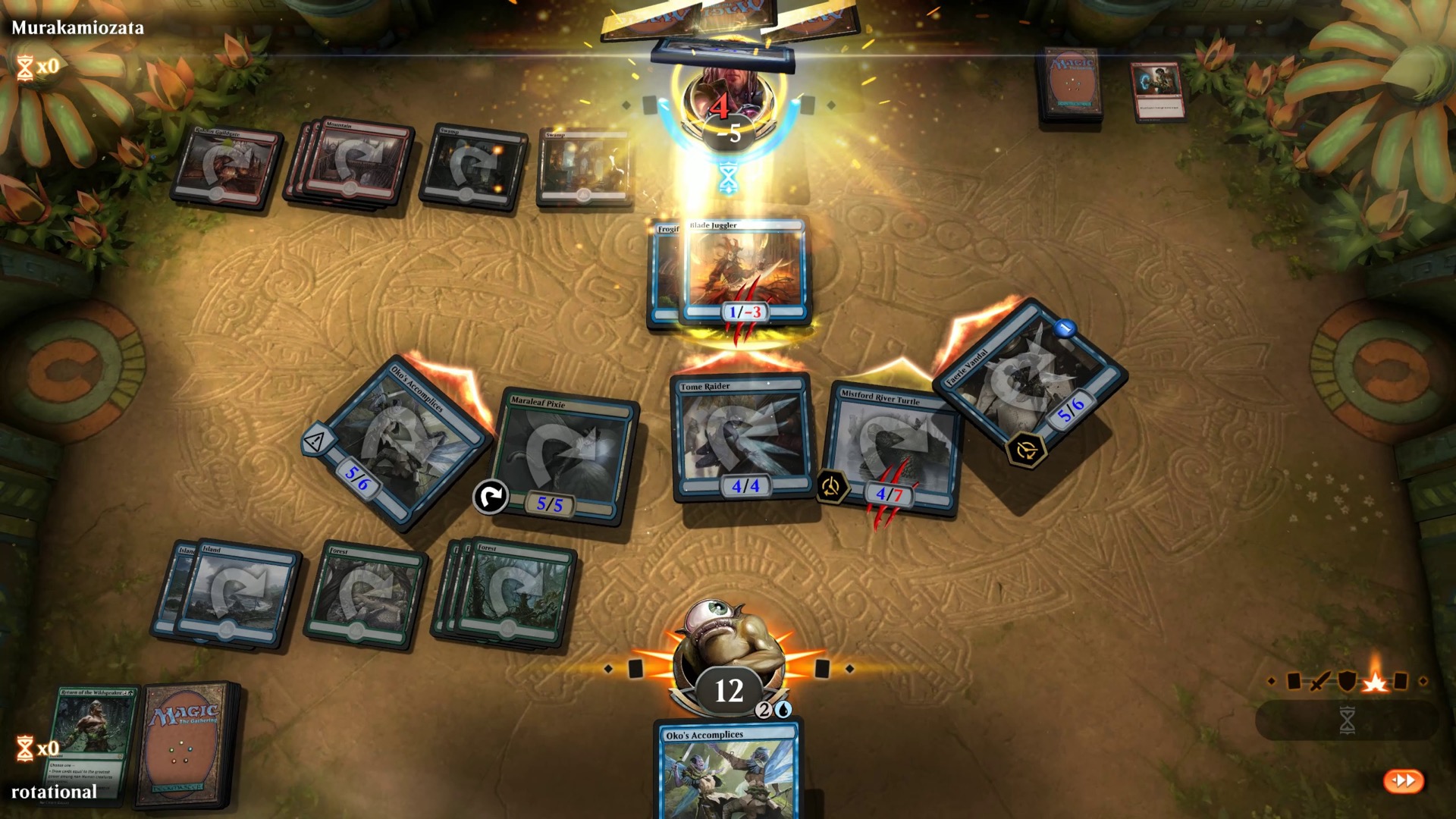 “If you’re really into Arthurian legend, there’s lots of material, but we found the stuff that the average person knows dropped off pretty fast,” Rosewater says. “Yes, they know Excalibur. They know the Lady of the Lake. Do they know the Green Knight? Most people don’t, even though it’s a big part of the story.”

Not that this realisation stopped them. In the final set there’s a card called Questing Beast, which comes directly out of Arthur’s tales (FYI “Its name comes from the great noise that it emits from its belly, a barking like ‘thirty couple hounds questing,’” says Wikipedia).

But since it’s not widely recognised, Questing Beast is a rare card. “What we call the deeper cuts, the things that you might not know off the bat, we put at higher rarities,” Rosewater explains. The well-known stuff is on the common cards.

So Rosewater’s team had a long list of stories, and they broke them down into their most emblematic events and characters. They discussed which were the most compelling, and then began to think about what mechanics they might lead to. 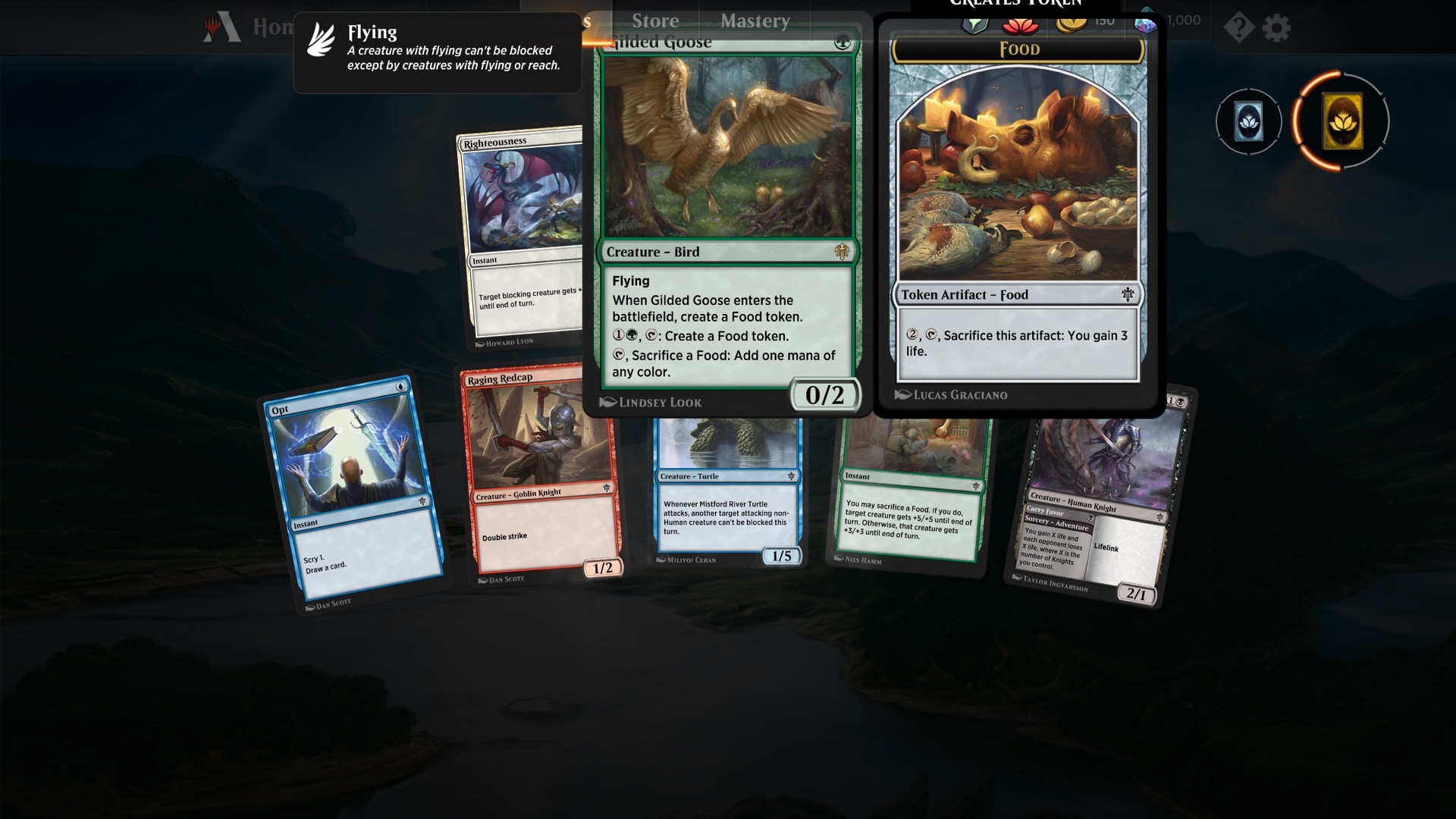 “We had to do the golden goose,” he says. “So, okay, what would a golden goose do? Well, it makes a golden egg. So early on, you could tap the goose and make a gold token, which you could trade for mana.” So that fit nicely.

At this stage, card ideas are being put into Wizards of the Coast’s big development database, which can then print them out on blank Magic-backed cards so the team can start playing very quickly. From here, they’ll undergo rapid and major changes, because Rosewater’s five-person team, Vision Design, is only the start of the process. He’ll be handing over to Set Design, who will then hand over to Play Design.

”Let me give you my super fast metaphor,” says Rosewater. “Imagine we’re building a house.”

Then Play Design takes over. “They are kind of like the interior decorators, who come in and figure out how to make the house as nice as possible.” They balance the set for tournament play, and make sure it plays well before release.

The golden goose changed between Rosewater’s initial idea and the final game, where it’s called Gilded Goose. During the Set Design phase, gold tokens got changed into food tokens, and so in the final thing, the player can tap a Gilded Goose to create food. 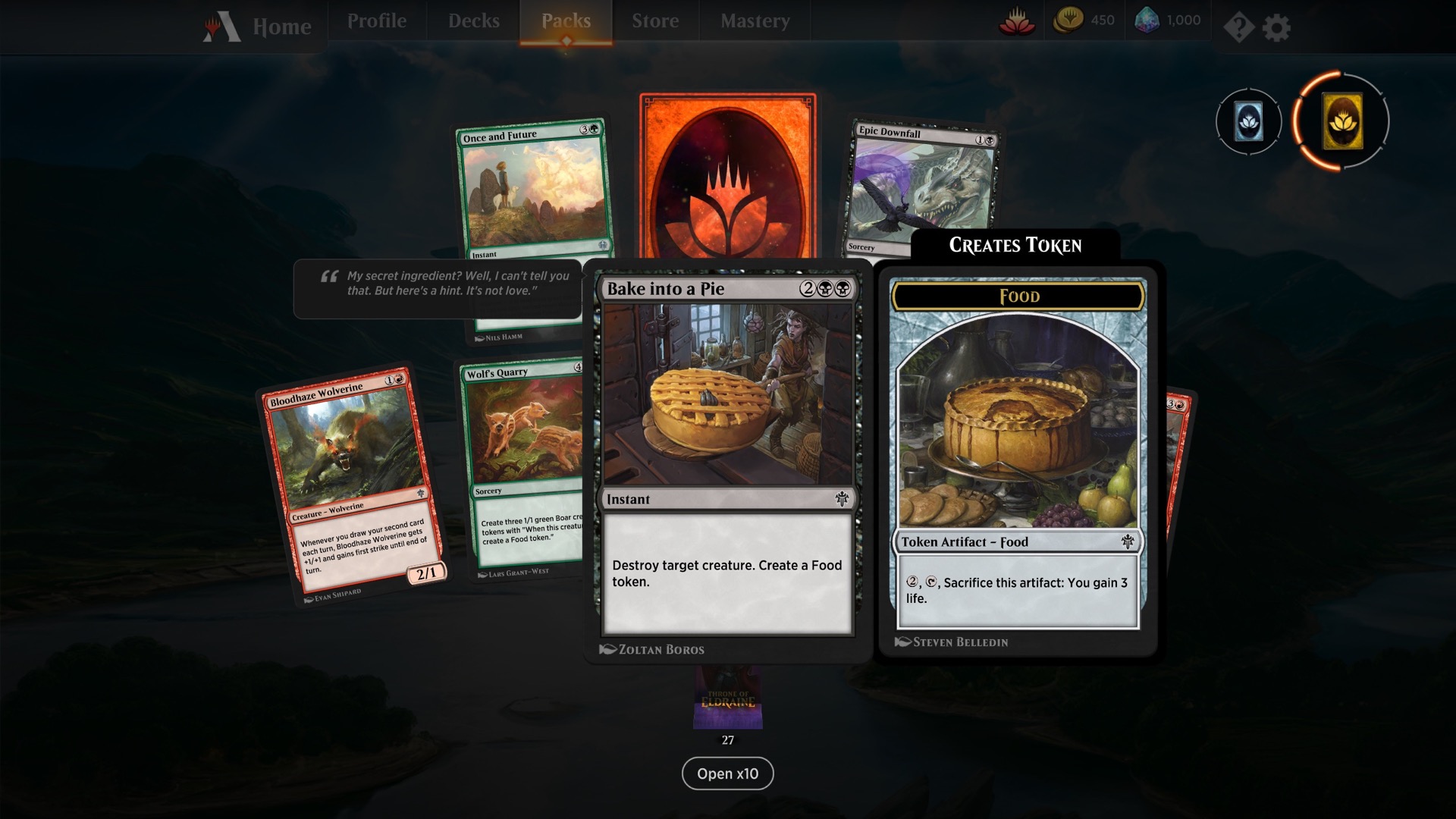 Food is one of the three new mechanics Eldraine brings to Magic. A token that you can tap to give you life, it emerged from one of Vision Design’s ideas called Bake into a Pie. This white spell could enchant an enemy creature so it couldn’t act, and then you could spend mana on it to both destroy it and gain life. “I guess they could eat you because you’re a pie, and that introduced the idea of food being a way to get life.” So it changed into a black card that destroys an enemy creature to give you life.

After all, the teams had realised that fairy tales are full of food. “Little Red Riding Hood carries a basket of goodies, Hansel and Gretel drop bread crumbs and end up eating a gingerbread house. Jack’s magic beans, and the cow. Snow White and the evil queen with an apple.” And then from food, creatures were introduced which are also food, like Gingerbrute, the food golem who you can sacrifice for life. 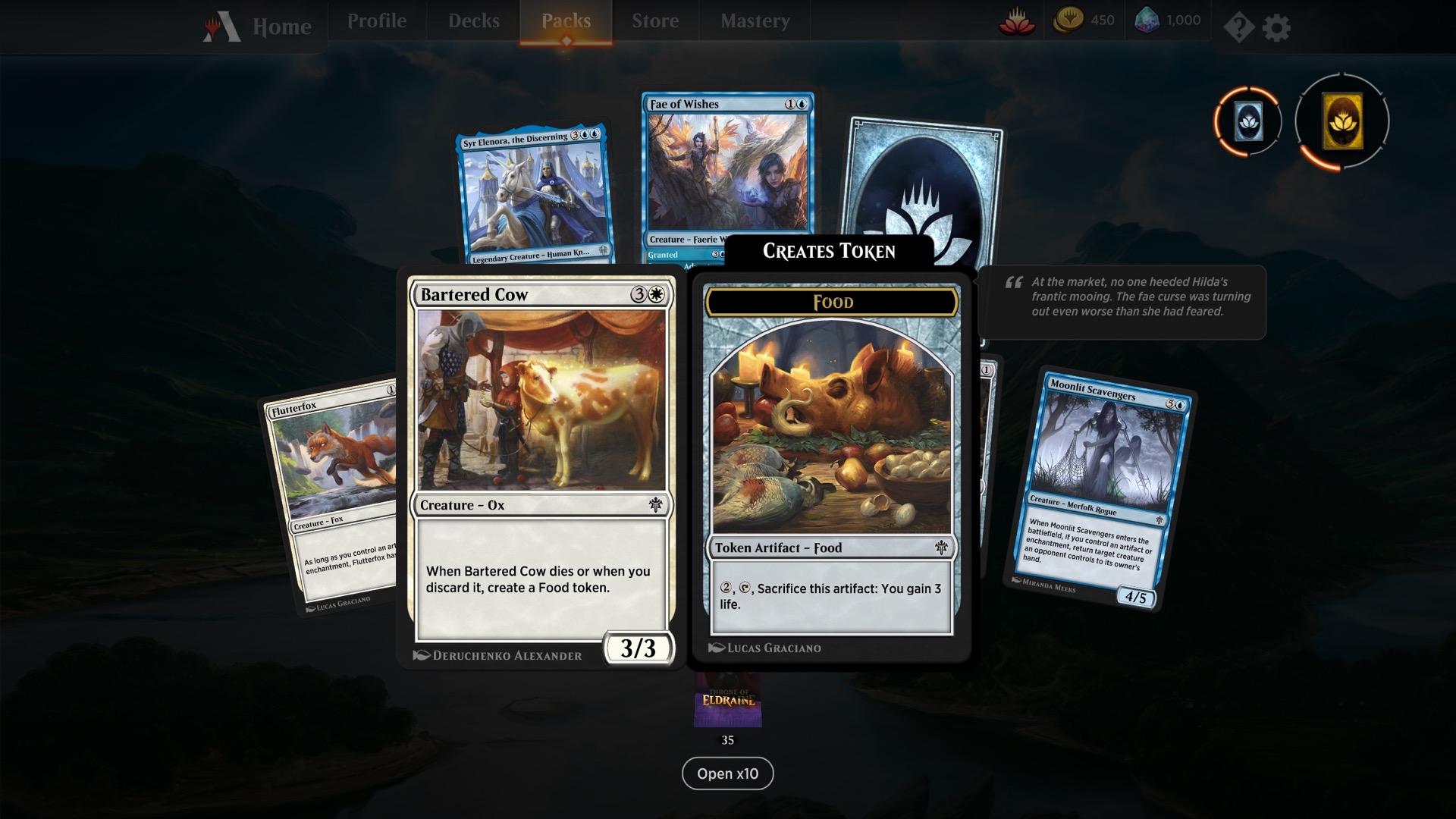 An early card that was entirely changed during the process was what became Bartered Cow. When Rosewater first made it he called it Trading Cow, and it was going to be a red creature. When you played it, it’d force your opponent to exchange one of their lands for it. It sounds a promising card, but with the introduction of food, Set Design felt it had to fit into the same system. Now, when Bartered Cow dies, it creates a food token.

Such big changes are completely normal during the design of a set. Vision Design only aims out to fully pencil out the whole set before it hands over to Set Design, but Eldraine was proving a little tricky. Two of its core mechanics still weren’t defined: food, and what became adventures.

The adventure mechanic was a direct response to an issue Set Design came up against: they felt that Vision Design’s set was too focused on making big mechanical choices during deck building and not enough during play (Set Design lead Mark Gotlieb has written a full account of how Adventures were designed). 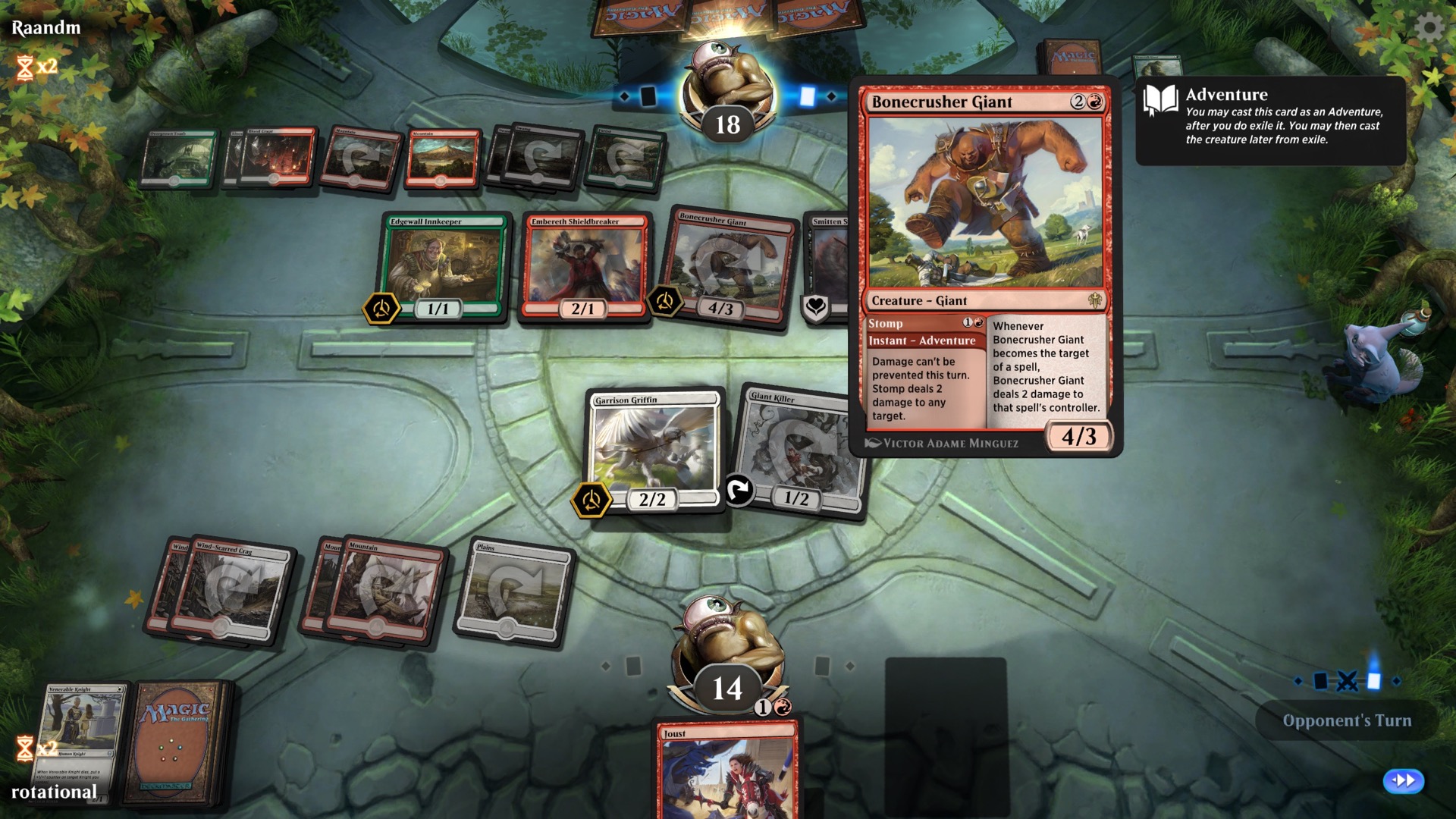 Adventures gives certain creature cards the ability to also be played as a spell, and then later as a creature, thus giving the player more wiggle room. It also fit neatly with the idea of a knight going off on a quest, and which can later be called on to serve. It’s all very Arthurian.

“I love metaphors. Let me use another metaphor for you,” says Rosewater. “If you think of Throne of Eldraine as a cake, the fairy tale component is the icing, meaning it’s sweet, it’s sexy, it makes the cake look really good, but it isn’t the substance of the cake. The Arthurian legend was more of the cake of the cake, because we had to build a world. As my art director said, Cynthia [Sheppard], it doesn’t make any sense to make a race of Cinderellas. But we can make a lot of knights, and we can build different courts.”

The knight cards are organised into five courts, each themed to one of Magic’s colours. “So the white court cares about loyalty, blue cares about knowledge, the black court is about persistence, the red about courage, and the green court cares about strength. That allowed us to give an identity and a mechanical hook for each of them.” Blue Eldraine cards are about drawing cards. White generates tokens and helps groups of creatures. Black brings bring cards from the discard pile. 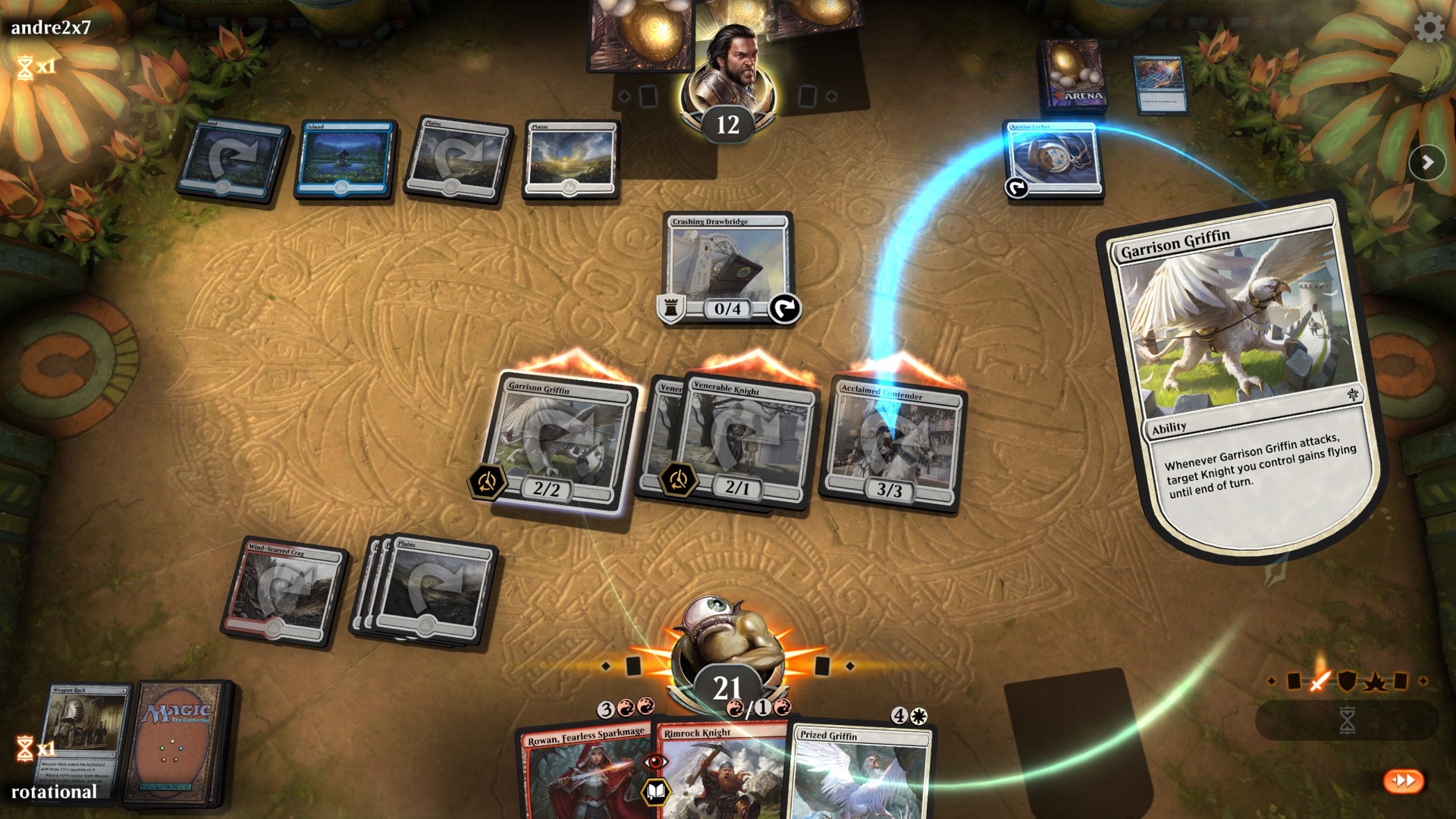 One last thing needed to fit to produce a set that brought these two sides, fairy tales and Arthurian legend, together. It needed what Rosewater calls a “conflict engine”, a vital bit of theming that the cards build through artwork and flavour text.

The artwork is commissioned during Set Design’s phase, when the card is fundamentally known. The team figures out what the card is meant to represent and an artist is assigned. During the end of Set Design and into Play Design, the art is done. If a card is changed from here, it has to fit the artwork; it can’t be drastically raised or lowered in power because it won’t look right any more. 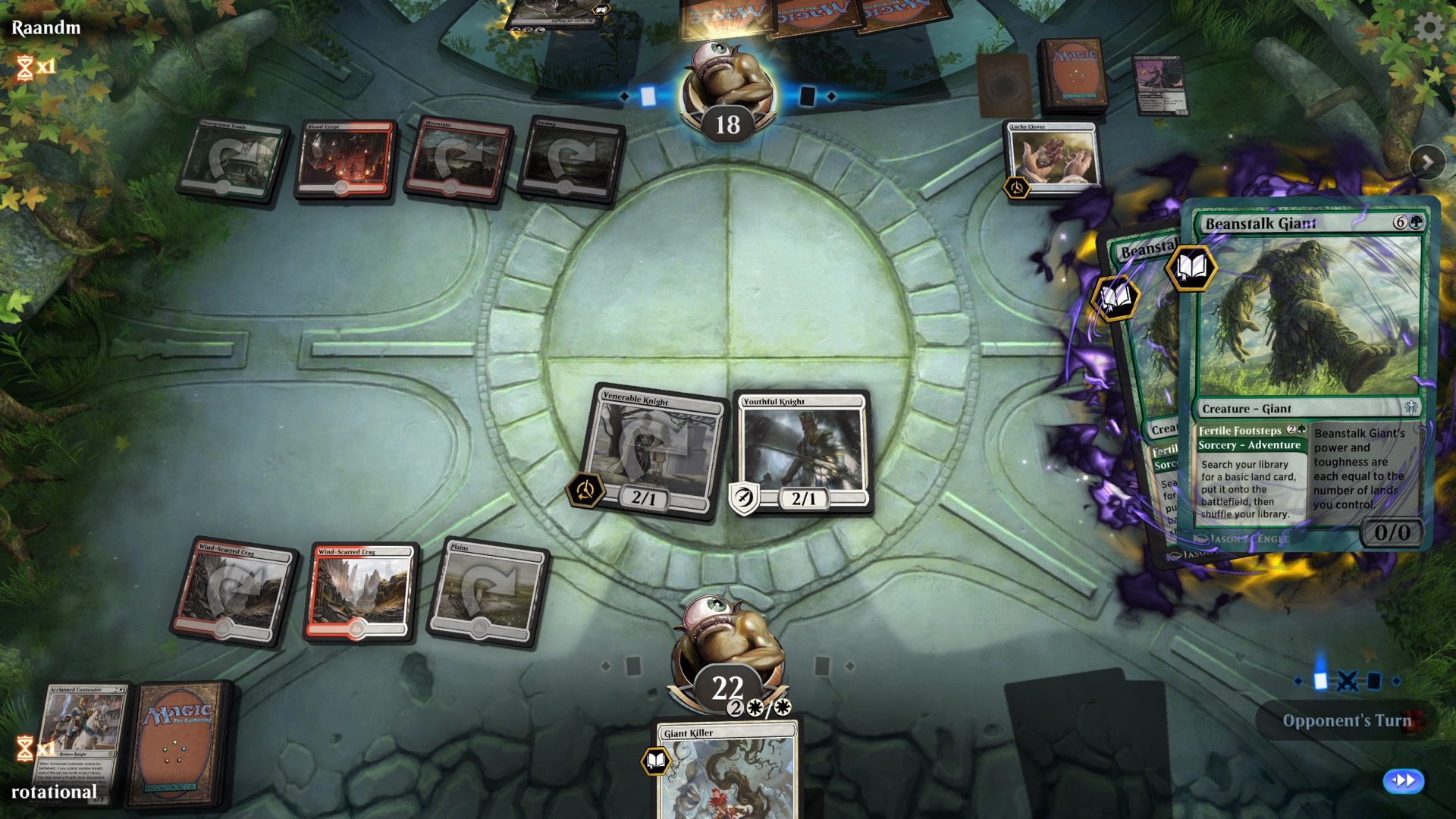 Card text and names are also written at the end of Set Design, with a new department, editorial, coming in to ensure that it’s all consistent and understandable. If there’s room on the card alongside its mechanics, flavour text will be written, such as that on Bartered Cow, where we discover that the cow is, in fact, a cursed human. “One of our goals with mechanics is to try to get it as succinct as possible so that we have room to put other things on the card,” says Rosewater.

The result is a fabulously multifaceted set of 269 cards, rich with different strategies and emergent interplays. When it was released at the end of September, it was the third expansion Wizards has released this year. And the machine continues: the next will be out in January.

“This set was easy in the individual card design, with so much good source material,” says Rosewater, comparing to other sets. It’s rare, apparently, that so many cards defined by Vision Design make it through to the final game. Instead, Eldraine presented a different challenge: Vision Design failed to establish all its key mechanics.