Final Fantasy XIV offers a lot to potential players. It’s a polished MMO with great writing, combat, and a seemingly infinite number of crossover events. But you can also ignore all of that and spend your time designing and decorating a home. The Housing System allows you to buy an estate and play a private game of interior design using items earned, bought or crafted to decorate the space.

It can feel more like you’re playing The Sims than an MMO, but for many players inhabiting a home through their character gives them the satisfaction of a job well done. Plus the houses exist in actual neighbourhoods, with other players’ houses visible and accessible from your front yard. My next door neighbour has built a nightmarish labyrinth in his cellar, for example. 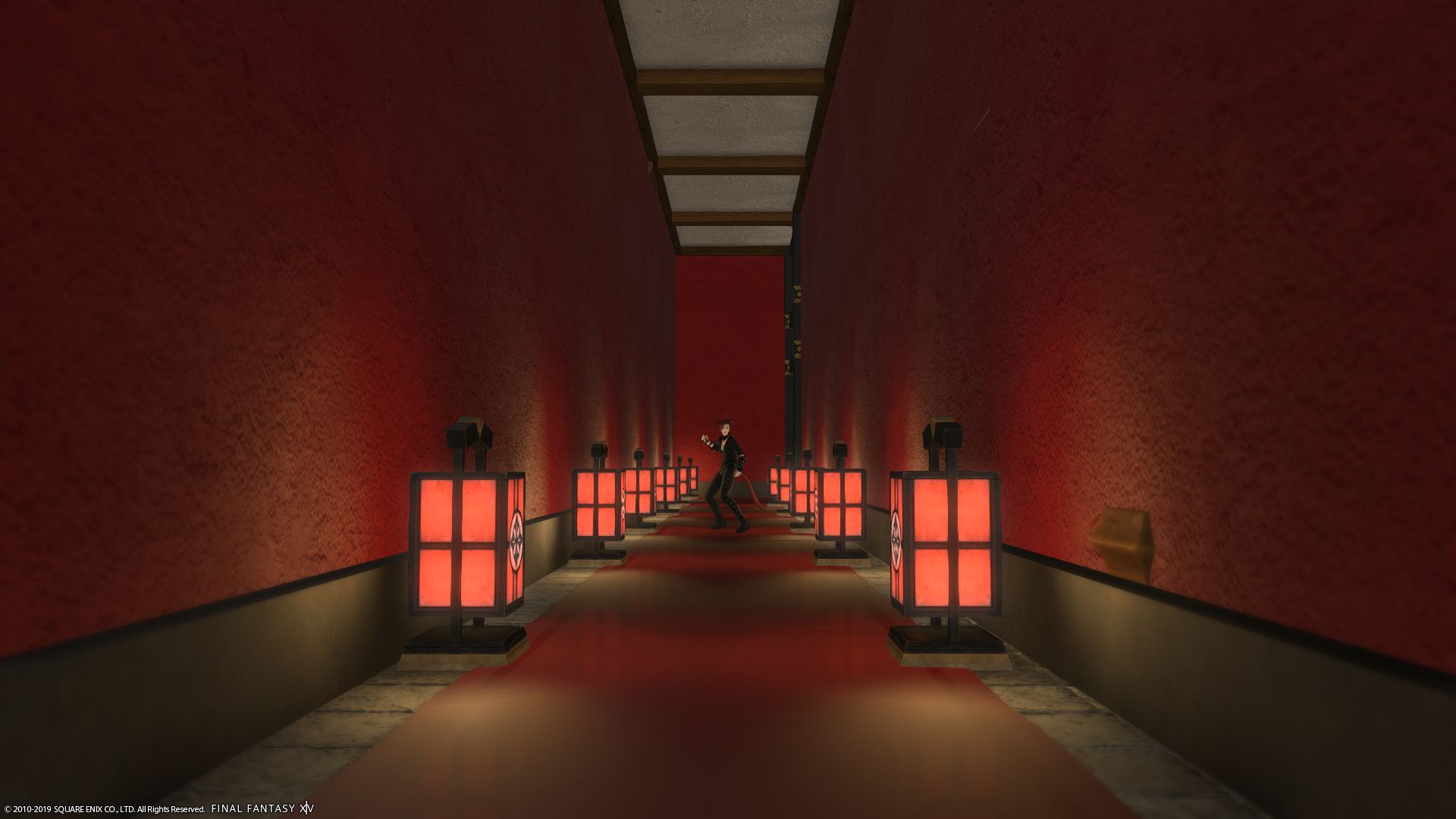 My neighbour’s labyrinth. Which is not unsettling.

Yes, as with almost every game that has ever existed, players have found ways to exploit glitches in Final Fantasy XIV, creating very unique environments. While some of the houses you’ll encounter are IKEA-level mundane McMansions, others are so bizarre they almost defy description. But it’s not about breaking the game for breaking’s sake. It’s about self expression, community, and deepening your roleplaying.

I spoke to “Mikhel’a Mirago”, who plays as a Miqo’te (a playable race of sexy cat people) about their relationship with player housing in the game. They told me that it’s not uncommon for them to go through multiple layouts, scrapping everything and starting again, before they find what works for their character.

“Anything that lets me mess around with an open space and offers a wide selection of furnishings in various styles has my full attention,” they said. “Sometimes I log in only to decorate, as it’s a different kind of focus to the hectic environment of a raid or a dungeon with strangers.” Mikhel’a treats their home as an extra layer of roleplaying — even if it’s just being able to have their avatar mend or dye gear in “the privacy of his own home”, or lie down on a bed before they log out for the day. 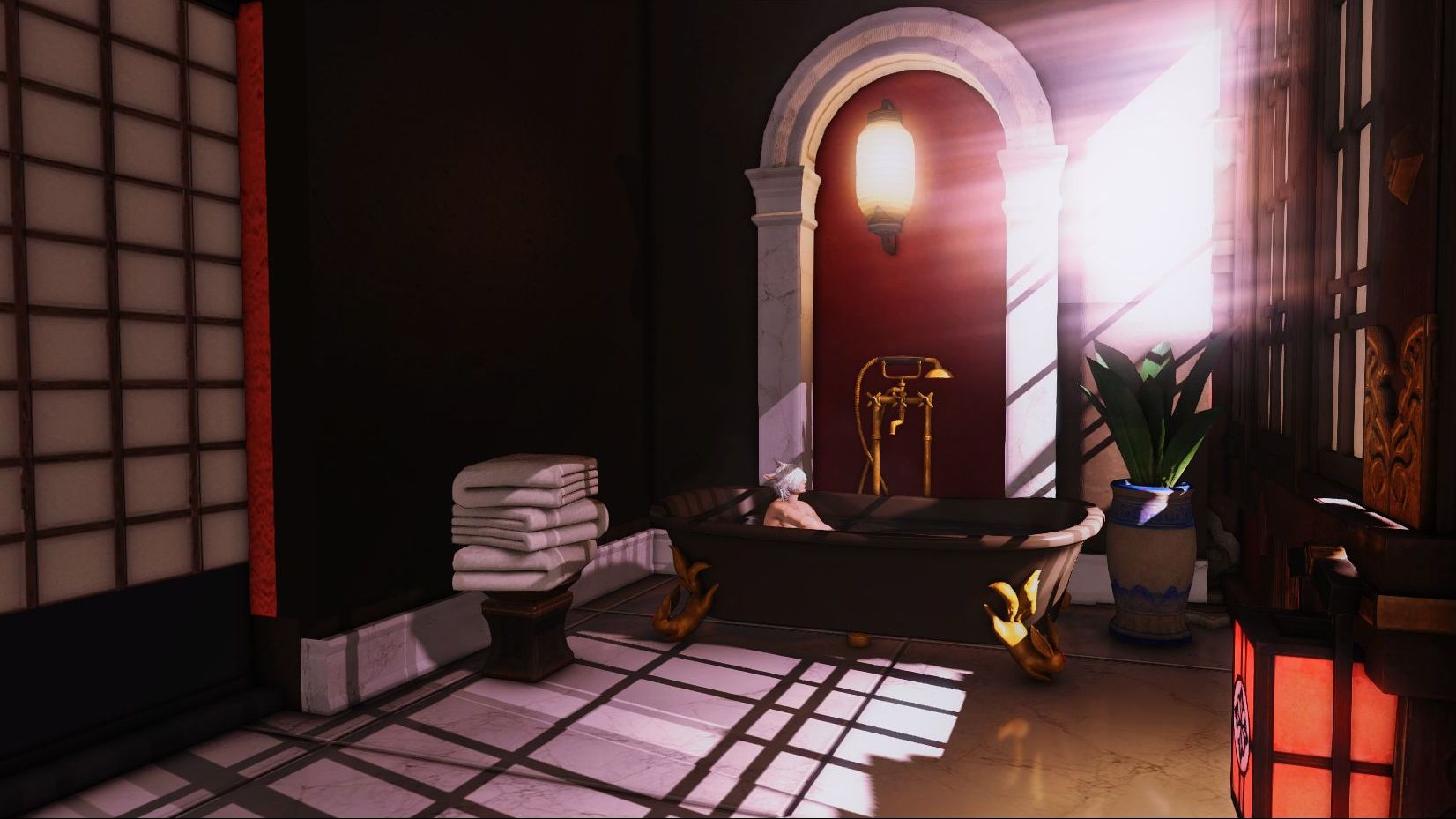 Mikhel’a’s Warrior of Light having a relaxing bath.

But as meaningful as it can be, FFXIV’s housing is notoriously difficult to acquire, with the game’s limited number of plots being highly sought after by individuals and Free Companies — the game’s equivalent to guilds. Lex Winters, who runs a Free Company for LGBTQ players, spent over a dozen person-hours with her friends to ensure they had a home to come back to. The header image of this article is a screenshot of the Free Company’s home just after it was acquired, but they’ve made improvements since then. “Having a community space like this in the real world is financially beyond my reach as an unemployed disabled queer person, so the game at least provides an accessible outlet for that,” she explained.

Winters added that it gives the group an opportunity to design the space as a group, as well as collaborate on gathering the materials needed to craft the furnishings. Her favourite part of the Free Company’s house is the Aquarium Café, in large part because of the collaborative effort it took. “It was a good project because it really allowed everyone to work together on something, even if it was just gathering some low-level materials, or picking out the fish for their aquarium tank. It’s a space we can all say we contributed to in some way.” 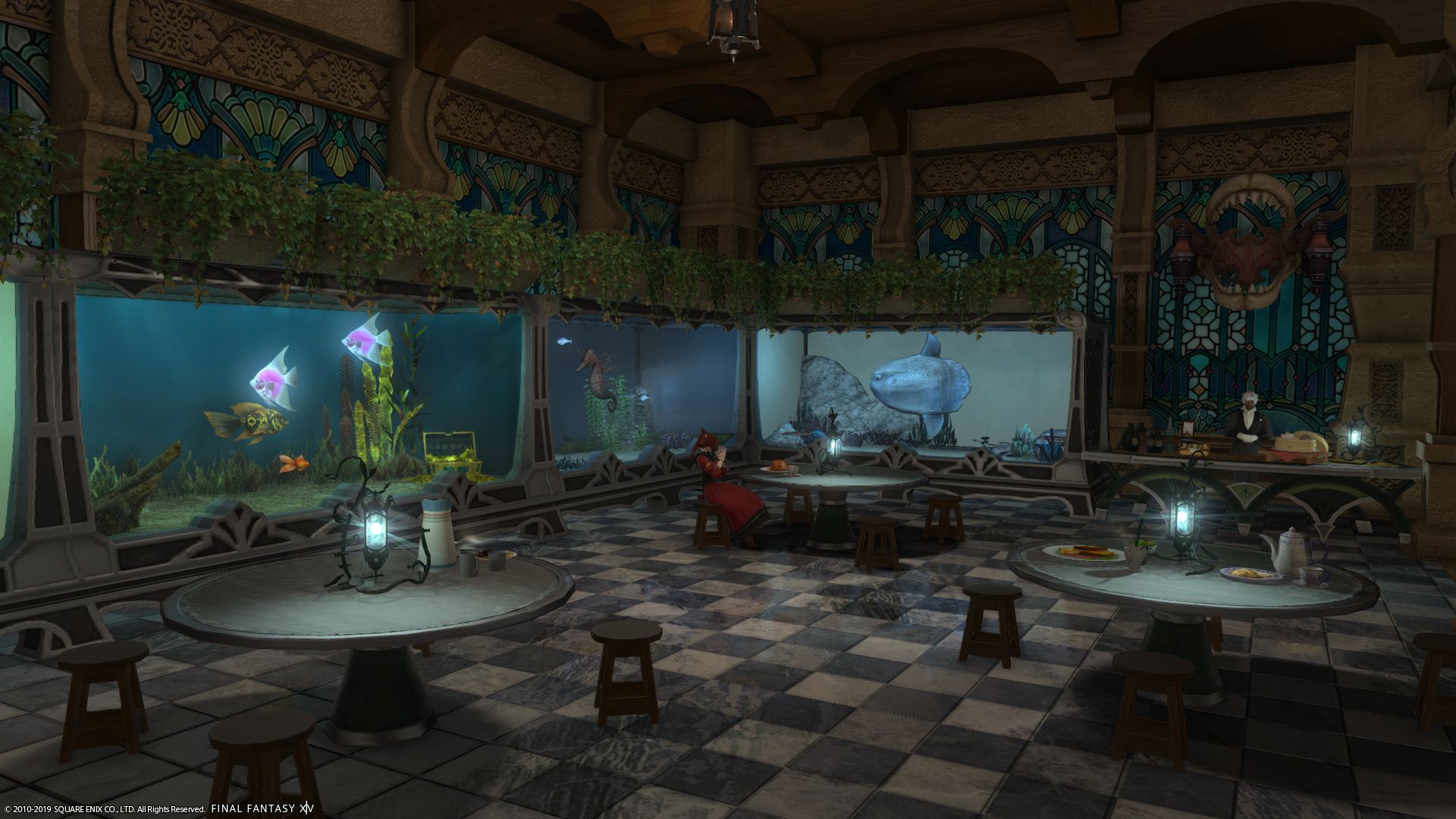 Each planter above the tanks in the Aquarium Café had to be painstakingly placed with the floating furniture glitch. There are 12 in all.

Getting all the necessary ingredients for crafting items can take considerable effort, but the results are something that players take considerable pride in. When Winters’ group finally got a hot tub, they had everyone over to show it off, and posed to take photos.

An eye for potential posing spots is often critical in the design process, as the game’s camera mode and costume systems facilitate plenty of self-expression. One group of players that I spoke to, a Free Company called Please Calm Down, created a photo studio in a corner of their home, and their community Discord has an entire channel dedicated to showing off their outfits. Others have used player housing to host games and competitions outside the scope of Final Fantasy’s own systems. “Band Maid”, a player from the Phoenix server, told me he had arranged scavenger hunts for his friends.

“I’d give a few hints or a riddle, then players would run, jump and sometimes glitch behind furniture to find something. The fastest person to find the item got a prize, usually worth several million gil,” he said. “At the launch of the Stormblood expansion, I put furnishings together to make them look like a PC desk with a screen embedded into a wall, and players had to glitch behind a wall to be able to see that scene.” 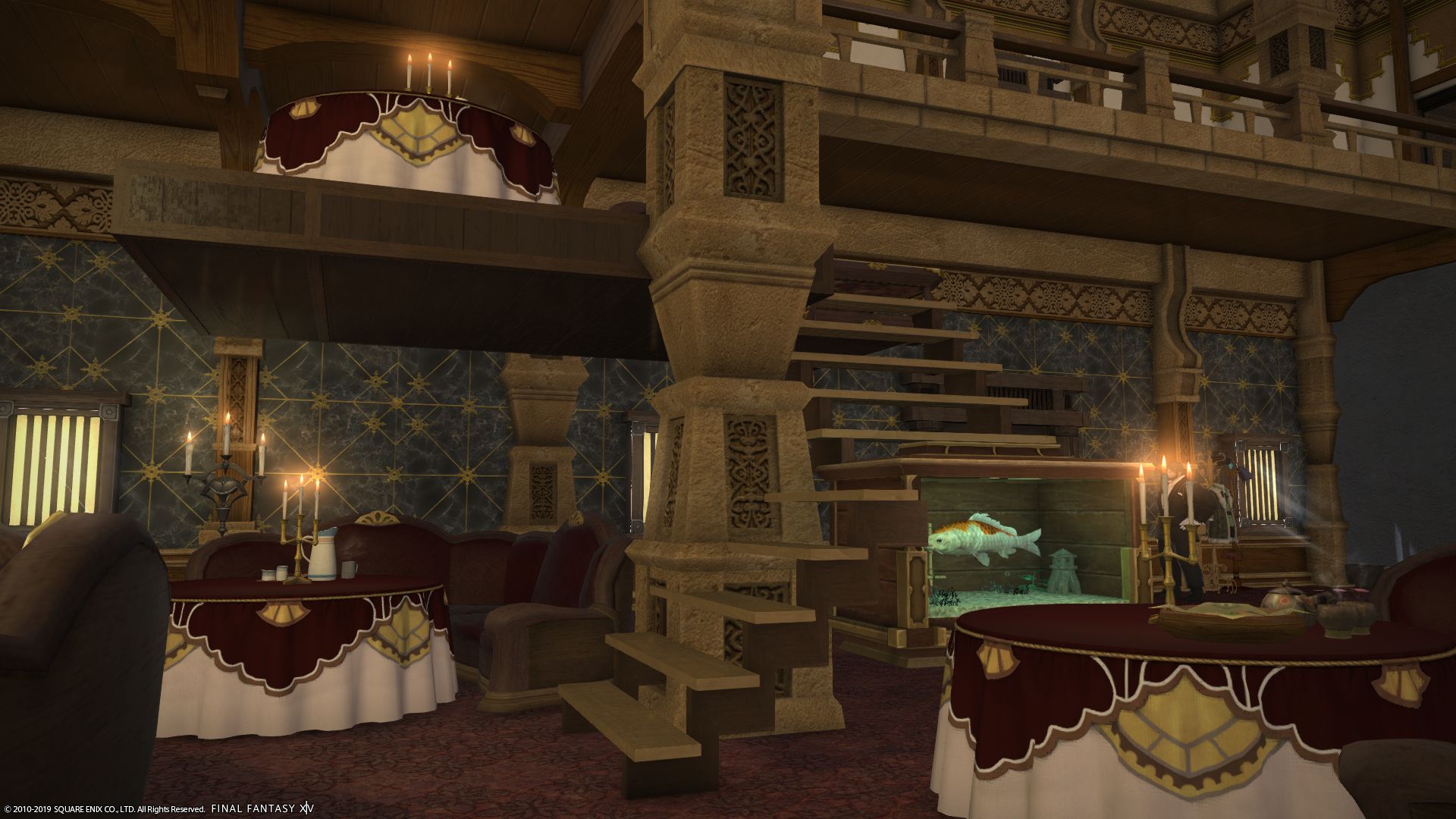 Another example of “glitch placement” to create a floating VIP table and staircase.

Creating the illusion of a PC screen involved a lot of different furniture and several careful glitches. “On one wall, we put a painting frame, and behind that wall, we had another wall with two shelves sticking out which served as top and bottom borders of screen,” Band Maid explained. “There’s a fancy bed which has water falling like a canopy, and we put that behind the wall and glitched a few furniture items on top so player would only see the water part.” A creative’s work is never done, though, and Band Maid has already been thinking about how he’d improve upon his fake computer desk were he to make it now. “I’d get an aquarium and a half-size partition and glitch those up with picture frames together. We didn’t have aquariums at the time.” Ah yes, much simpler.

Many of the more complicated housing set ups use what players call “glitch placement”, where items are stacked on top of each other in impossible ways, or floated in places they shouldn’t be able to. The development team seem to have given a kind tacit approval of this tactic. During 2019’s The Rising event, a yearly celebration of the game’s anniversary, players received anonymous letters from developers. One of these expressed that they enjoyed what people were doing with their homes.

“Seeing the furnishings my colleagues and I crafted with love and care tastefully adorning such warm and welcoming homes ─ oftentimes in remarkably creative ways ─ is perhaps the single most enjoyable sight an artisan can experience. At times, the layouts are so eccentric and unconventional that I fear it is only a matter of time before they come crashing to the ground… but I am nonetheless impressed with the sheer creativity on display.” 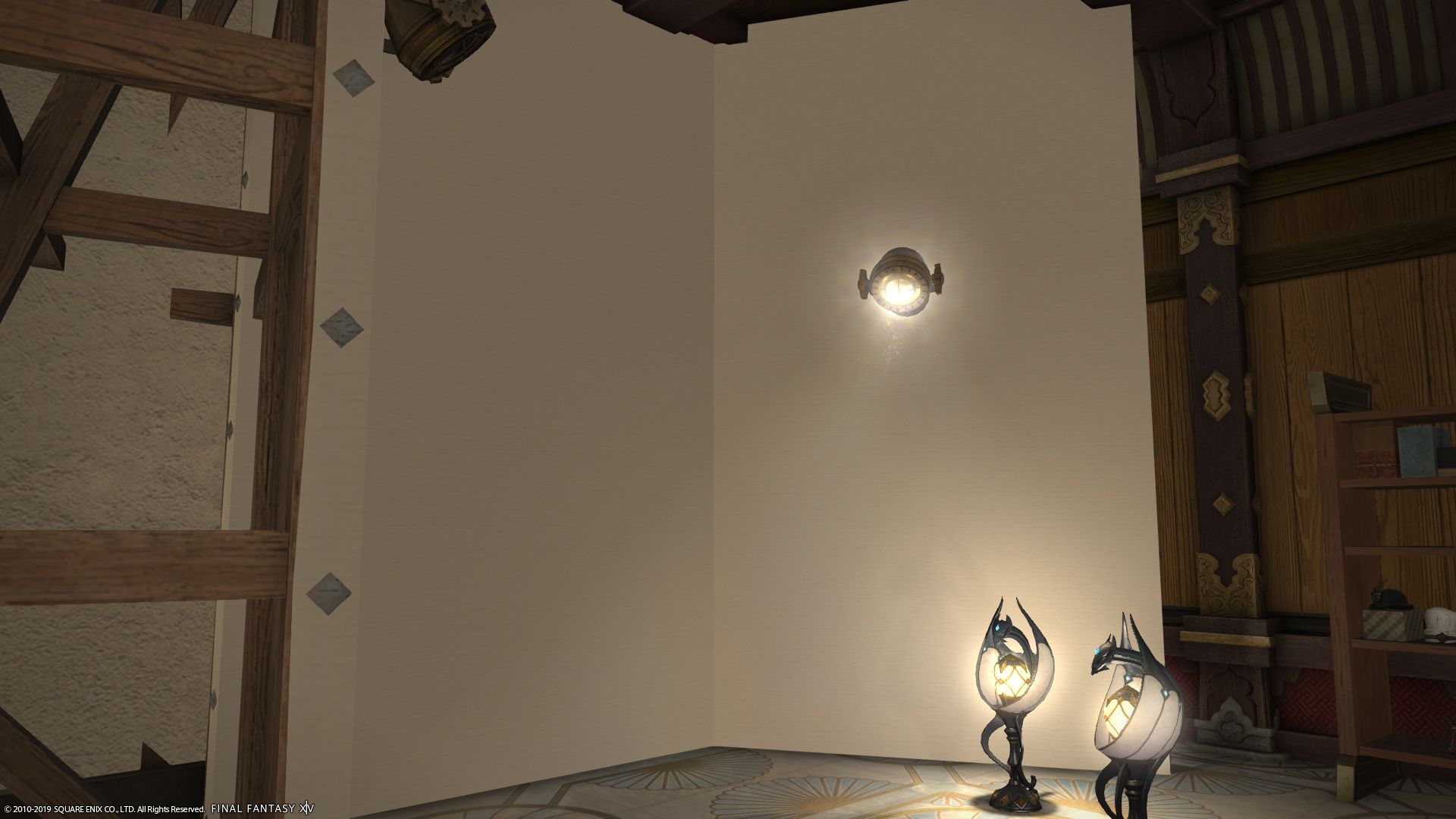 It’s a small kind of reassurance for these physics-averse decorators that their hard work won’t be undone in a future patch — although of course there are no guarantees about what will be broken and unbroken where live patches are concerned. A future patch may even make it possible to use glitch placements in even more elaborate ways.

Whether it’s a community space for players to hang out in, or a quiet and personal retreat for a weary Warrior of Light, players are carving out their own spaces in Final Fantasy XIV, and there’s always scope to expand. The anniversary letter celebration from the developers ends with the promise of more to come, either way: “As for us, we will do all in our power to continue crafting stylish furnishings and ornaments. May you continue to find joy in decorating your happy homes.”