There used to be a time when you could impress your family by loading up Google Maps, finding a childhood memory, and zooming in until it became a sort of pixellated memory lane. Your mum and dad would be amazed, and you would be lauded because you showed them their old shed viewed from a satellite on the same thing they use to look up recipes.

I thought I was past that sort of technology-as-magic reaction, but since I tried out Google Earth VR on my Vive I’ve been shoving it on visitor’s faces ever since. It’s magic.

Google are smart: when you load in, you usually find yourself in front of something remarkable. In my case, it was Neuschwanstein Castle. I gave an audible gasp as a perfect, fairytale castle, cupped in a tree-studded German mountain range, resolved in front of me. I’d expected a blob the shape of a loaf of bread with a scuzzy texture baked into it, but it was like looking at a doll’s house. A perfect, little castle nestled amidst the evergreens, towers and turrets modelled and textured. A road curved along the mountain, dipping in and out of view through the tree cover. I swooped myself around, standing above the castle and mountainside. For a brief moment, I was awash with a sensation that I was a giant and that I was in danger of damaging this delicate little scene beneath me. Then I stood on my cat. Don’t worry, she’s fine. 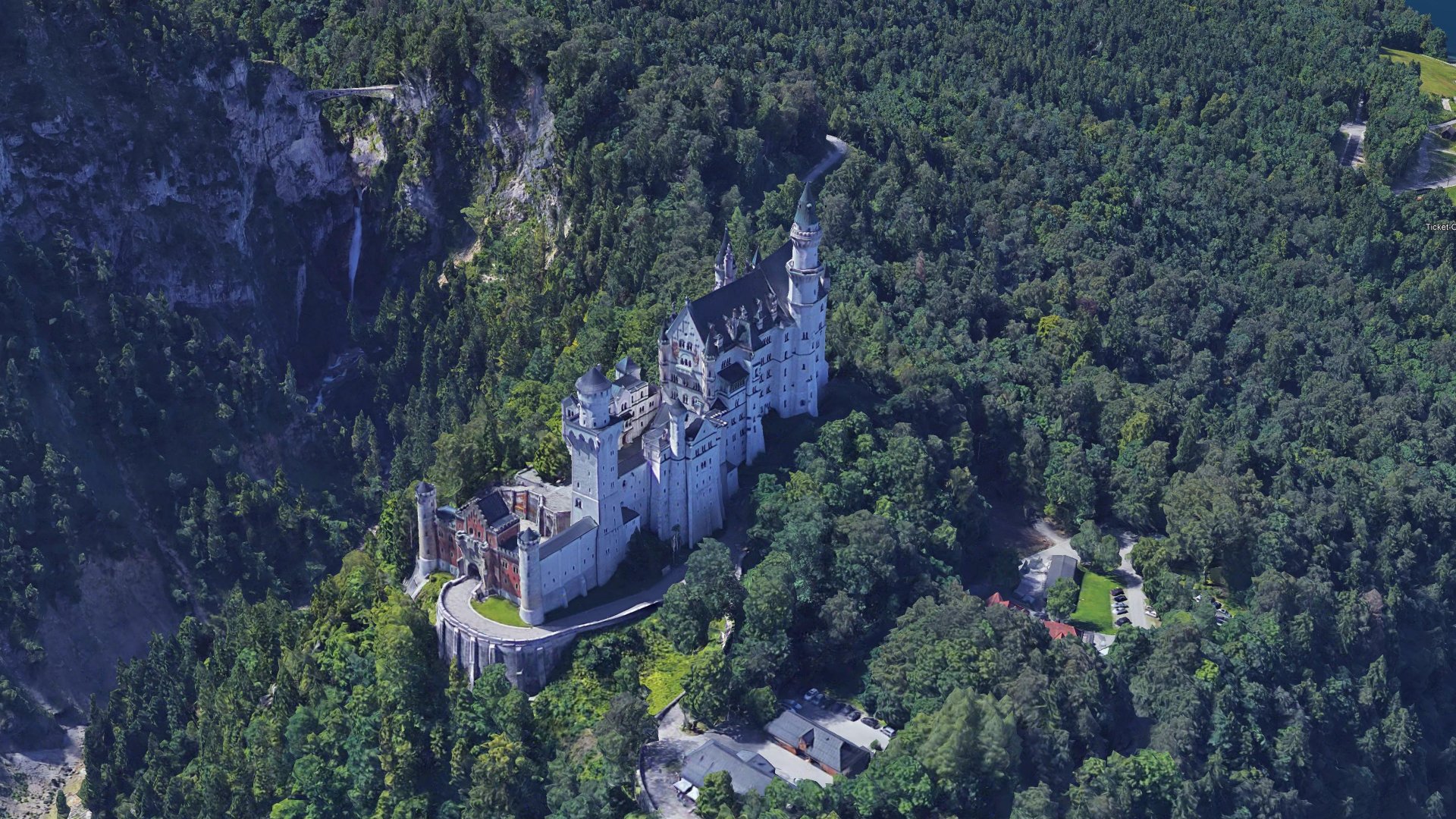 A few years ago in Google Earth VR, everything looked like it had been left out in the sun for too long. There was no definition. But now… The world sprawls. There’s a little town called Hohenschwangau below the castle, and down there each house is individually modelled and textured. You can see cars in the streets and trampolines in back gardens. A few miles out of town, in the rolling fields, there are bushes modelled. It doesn’t go on forever, but it spreads out and creates a powerful sense of place. There are still messy splodges, but they come across like the paint strokes that make a larger picture rather than a limitation of the technology. Things do lose cohesion closer to the ground, but from a bird’s-eye view you’d swear you were there. I did. 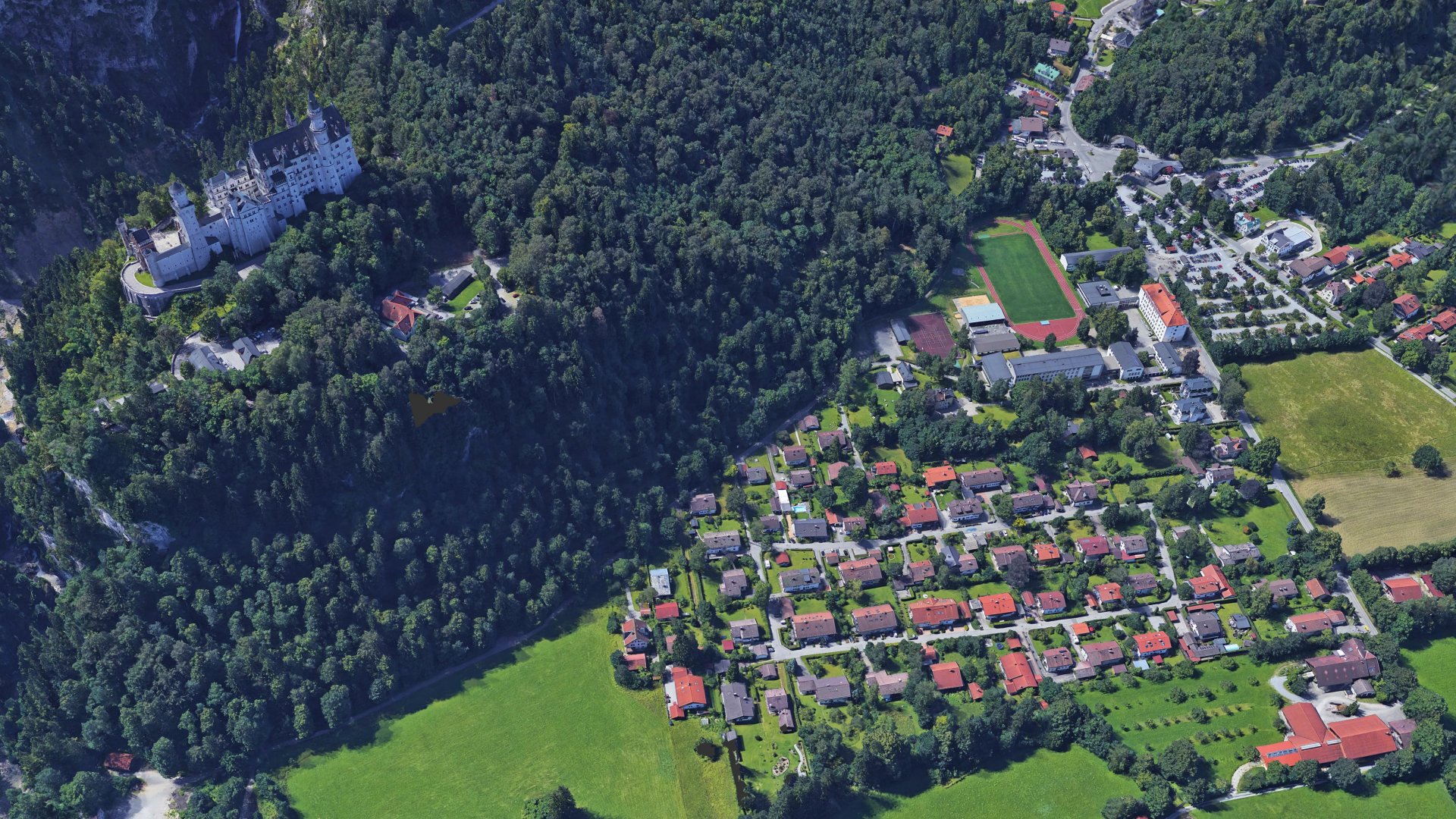 As charming as Southern Bavaria is, I wanted to experience something I knew in my bones. I moved to the small Nottingham suburb of Sneinton, where I lived at the time. I found a landmark I knew well, a derelict tower of flats atop a small hill, giving it just enough elevation to dominate the area. If you walk around Sneinton, you glimpse this grim block of flats in the gaps between houses as if you’re being tracked by it. When I got there, in front of me was an ugly white monolith, the opposite of the Romanesque palace I’d just left. But once again Google Earth took my breath away. I could read the graffiti on it (in the header image). 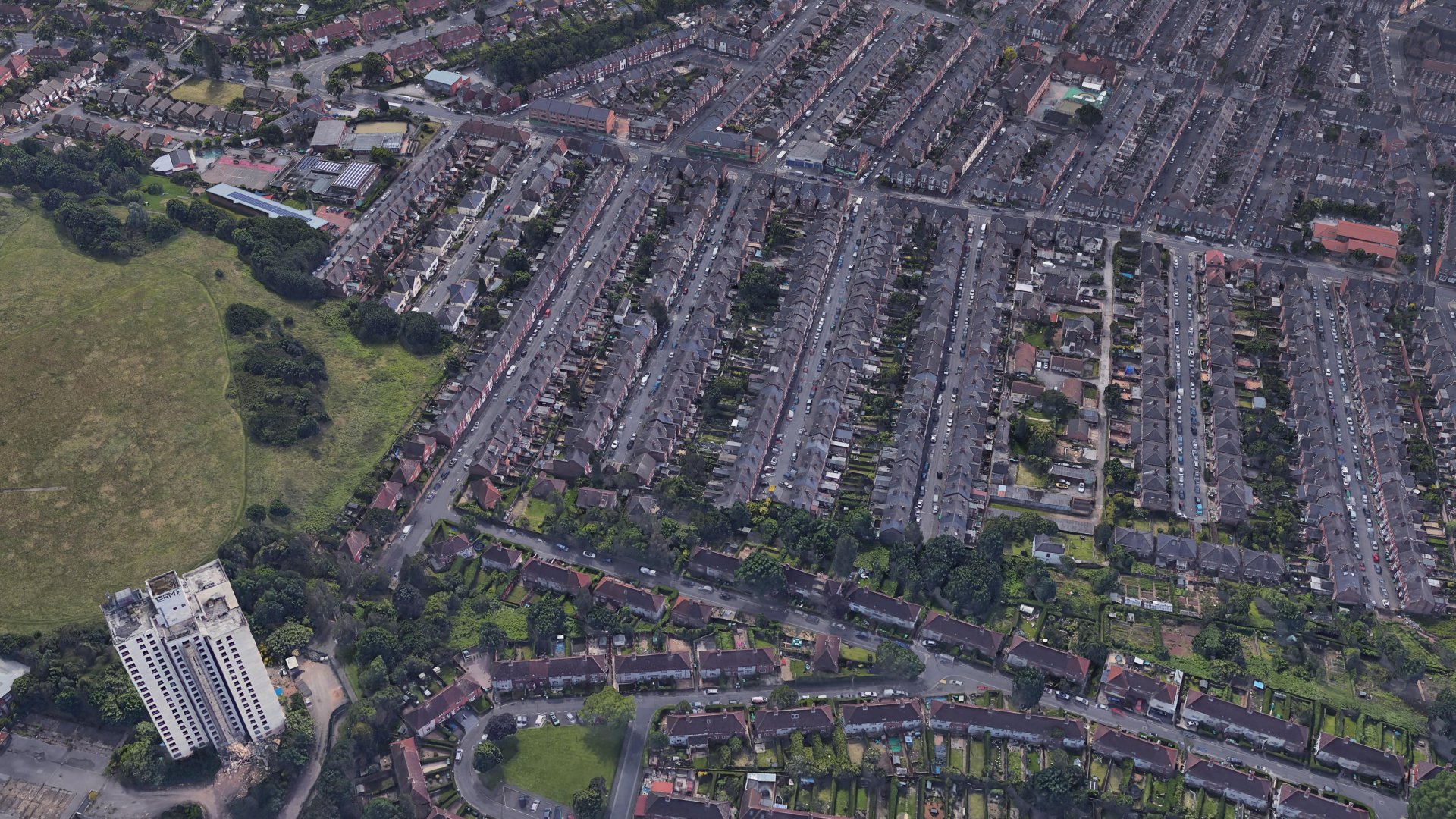 From my Vive, I rediscovered where I had lived for three years. I’d find things from the air then head outside and look at them. Splashes of colour caught my attention. The collection of industrial units south of my house were bright and inviting. Not just the yellow splurges of industrial equipment, but it turned out there were vintage buses parked back there, awaiting another bride and groom to rent them. I’d never have known had I not flown over it and been drawn in by the shapes and hues.

As I was dragging my viewpoint over a park, I spotted a tower hidden in the trees. A derelict church was hunkered down just off of a road I’d walked along, missed many times thanks to the tree cover. I’ve visited St John’s Church, Colwick countless times, since. 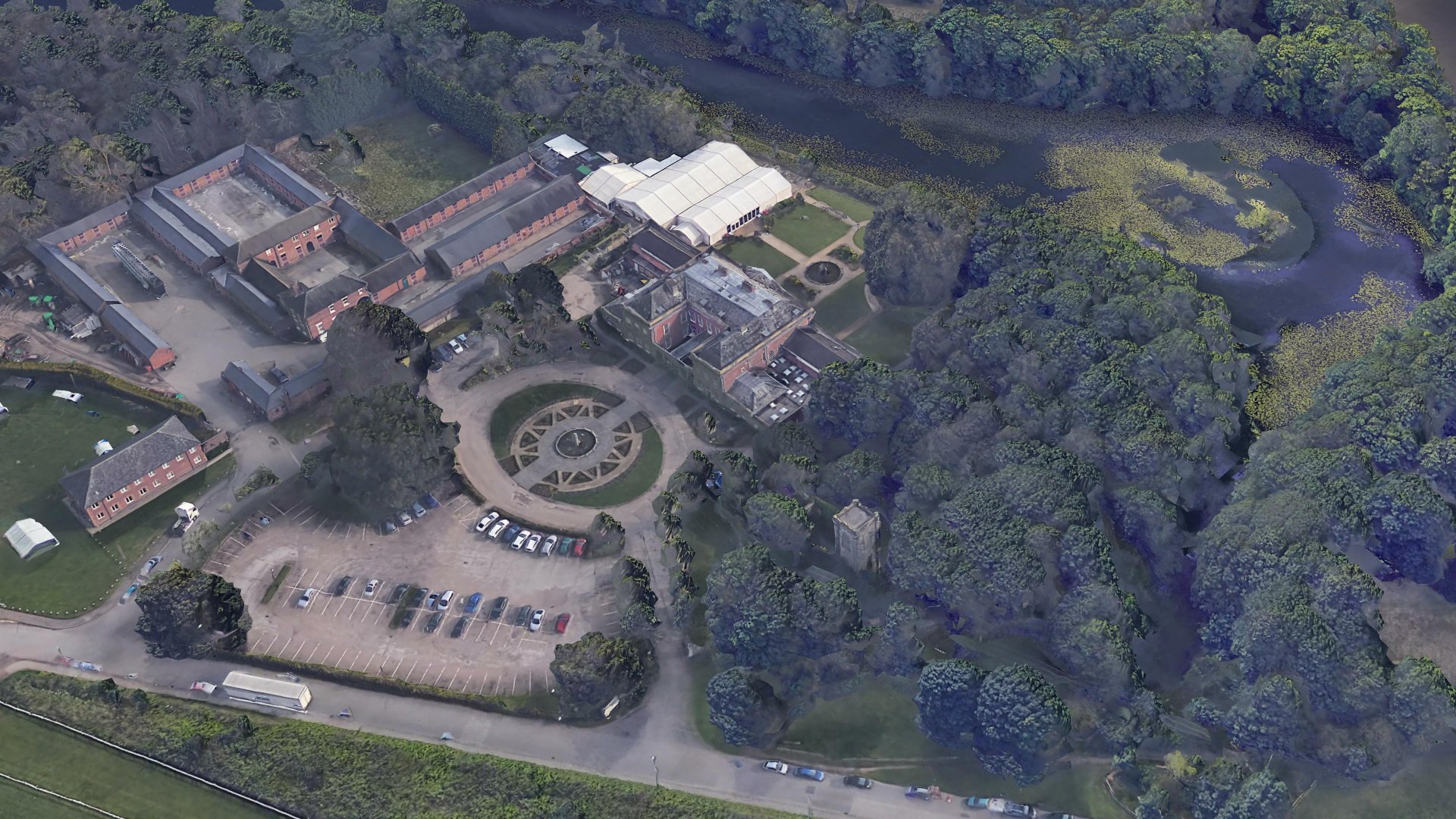 I became fascinated by an old, grim factory on the border of Sneinton, called the Great Northern Warehouse. It’s an abandoned grain factory, built in 1857. From above, you can see the metal scaffolding inside holding it all together, the roof long gone due to a fire two decades ago.

It looked like the sort of space housing companies would lap up, but no-one seemed interested in it. Then I hopped over to Google’s search engine and found out why. From above, rendered like a doll’s house, the factory building didn’t seem so bad, but a serial killer had buried two bodies there under piles of debris. I’m glad it was the one place I hadn’t paid more than a brief visit to. 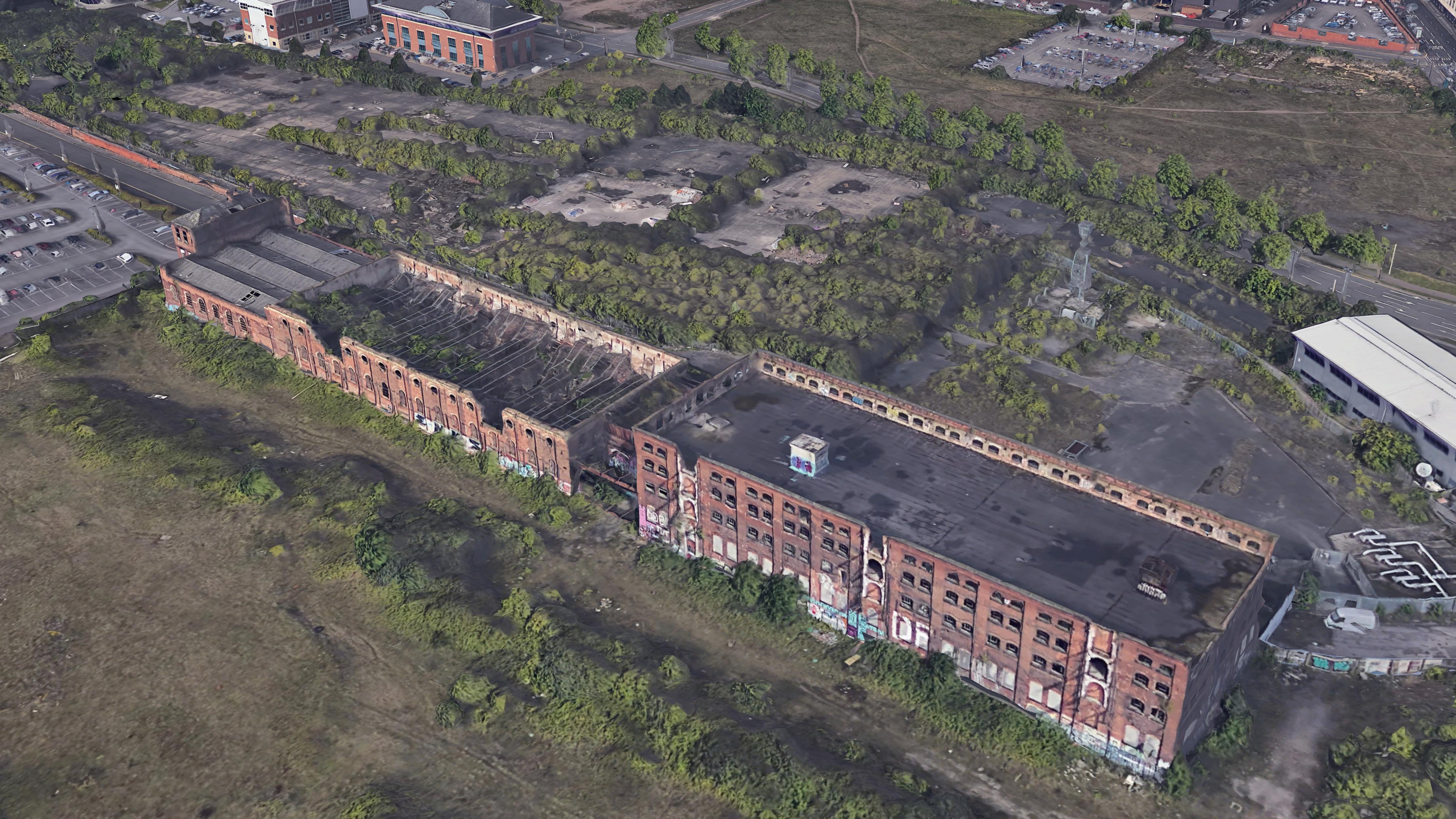 It’s not just that there are towering castles or murder-dumps to see. The spectacular bits work because the ordinary bits are there, all around it. The sensation of hovering over a normal little town, one where each house has a model, their fences and back gardens rendered, cars out front, is fascinating. The lively splashes of colour that you see in a playground, the hidden structures that exist on top of buildings. Cities and towns come together through a combination of necessity and humanity and Google have captured that, creating an explorable snapshot that’s made everyone I’ve introduced it to go slack-jawed.

I’ve shown my family the delicate, crumbling cathedral in St Andrews, where you can see through the holes left by the broken windows and missing walls. But I’ve also shown them my mum and dad’s car parked in their driveway and watched as they become entranced by their back garden once again.

The joy hasn’t diminished. I keep hopping into my Vive, scrolling past all the games I have installed, and settling into Google Earth for an evening. I live in a new city now, and I’ve already visited it and the surrounding areas, looking for inviting areas to visit. And every time I do, it makes me gasp.