Now streaming live:
A Panel Shaped Screen is a monthly column where Giada Zavarise explores how comics and videogames inspire each other. This time, Giada talked with developer thecatamites about the webcomics that inspired his work.

Stephen “thecatamites” Gillmurphy is a familiar presence in RPSland. In the past years we covered many of his games, from the blood-soaked RPG Space Funeral to the Kafkaesque Murder Dog.

His latest game, 10 Beautiful Postcards, is a wandering simulator about exploring hotels — and like all his games, it’s wonderfully weird. But where does this developer get inspiration for his ideas? Are DRUGS the answer? Or does he use something even more morally dubious, like COMICS? Rock Paper Shotgun, here to bring you answers.

(WARNING: The following interview has been lightly edited, rearranged and condensed for clarity. For the sake of journalistic integrity, it has not been purged of SATANIC REFERENCES.) 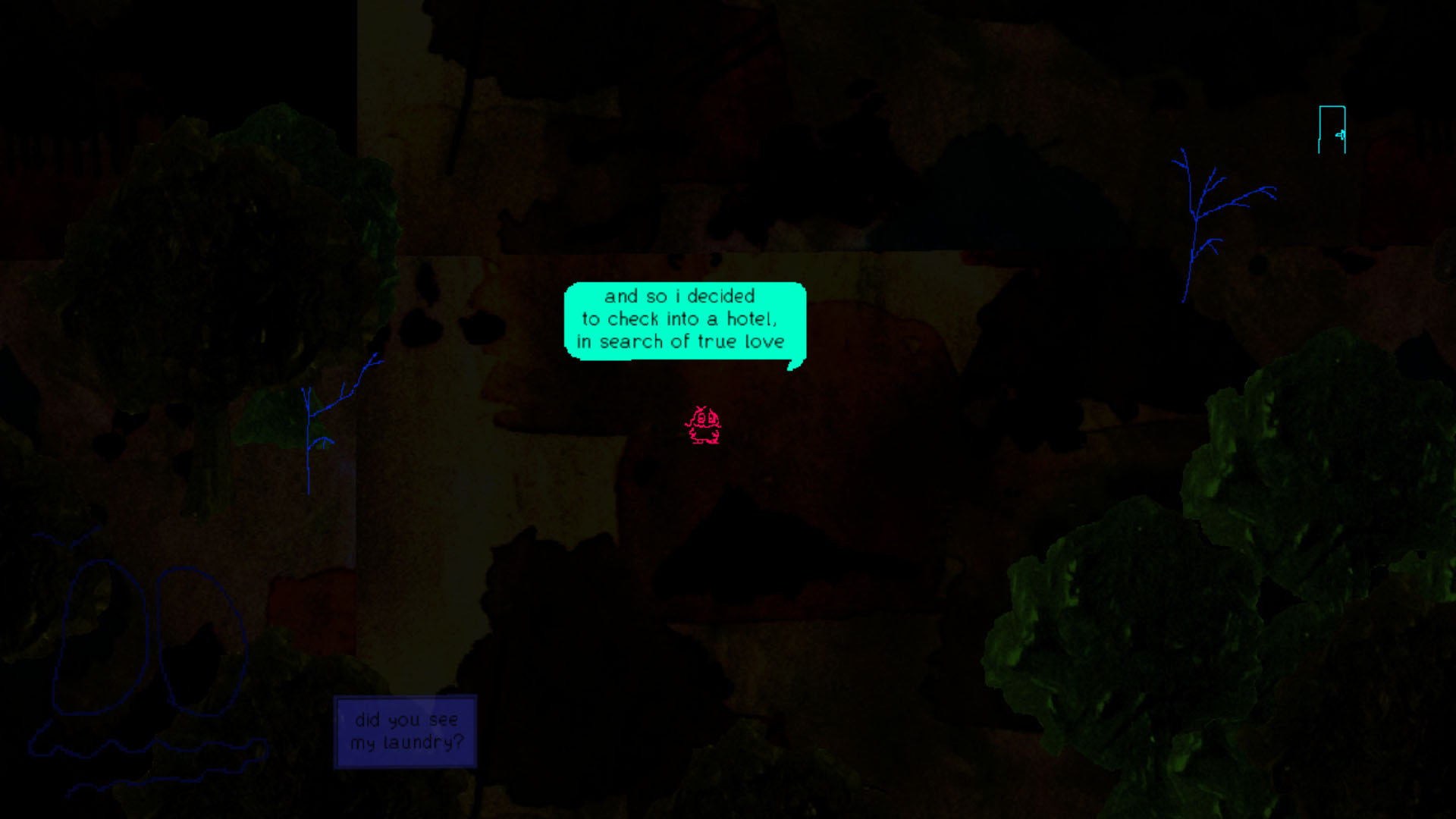 Is it true that COMICS corrupted you, Stephen? What is the secret tie between 10 Beautiful Postcards and the world of webcomics?

I think the big thing for me was the idea that webcomics could be a way of playing with HTML as a storage mechanism for any kind of content — comics, image, text, manipulable gameplay things. My favourite was Monster Killers by Winter K, which as a comic was really great, funny and exploratory. The later chapters kind of diverged out from fixed comic layouts to do things like depositing character drawings and textboxes and little ASCII bits around these big webpage layouts, so that you’d scroll around to see them. Kind of reading the screen in a strange way between homebrew web development and a comic book. And then using hyperlinks to connect up, and the potential for experiment there.

The other one that most interested me was Lamezine by Cate Wurtz, where she formatted her comic as a lot of separate HTML pages with images on them and then sold this big heap of offline webpages as a comic you could sift through. It felt a really interesting and mysterious way to go through a digital work, and again I liked the idea that HTML was something you could just use to organize any kind of collaged content. 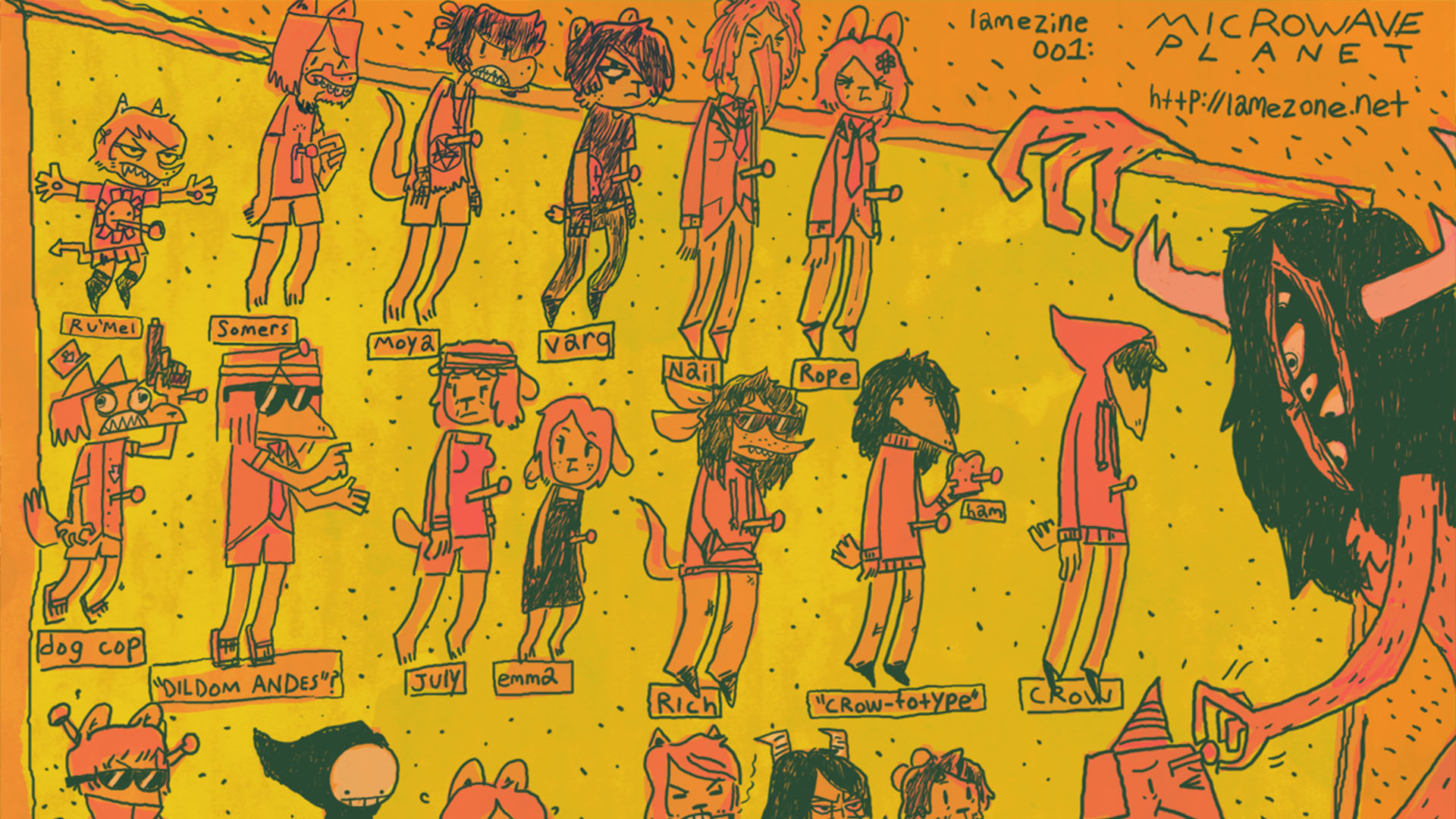 For a while I was really into the idea of doing short games embedded in websites along with text and images and so forth, and the idea that you’d experience them all in tandem. It never really came to anything, but made me interested in the idea of a game that could be read visually in the loose way of a website, and then trying to do something like that in games like Glimby and then 10 Beautiful Postcards.

I think also these were both really stylistically loose and interesting comics, that kind of constantly shifted representational frameworks from panel to panel. I was always jealous of how fluid comics could be about that stuff compared to videogames, so web layouts seemed useful as a sort of convergence point between the two approaches…

Have you ever read Scott McCloud’s book “Reinventing Comics”? He was very into this idea of the webpage as an “infinite canvas”: a space where comics could expand in all kind of directions, not strictly tied to the rules of cause, effect and temporality.

No, I didn’t! I definitely knew OF the infinite canvas thing, but it’d been around for a while by that time and I think was kind of regarded with some embarrassment, as the god that failed or similar.

As a kid, I would try to draw “comics”, but was too lazy to repeatedly replicate my little guys from panel to panel in any coherent way. So I would just take big empty pages and draw them in different places around that, to suggest they were moving around in real time, and then I’d scribble them out to depict them shooting each other and so forth…

I guess that is my personal first exposure to the idea of the infinite canvas. Or in that case the A4 canvas, which seemed near infinite at the time.

I think for me part of the appeal of the webpage stuff is that it kind of emphasised comics as collage, rather than endless grid layouts… and the idea of expanding that collage field to get looser and more diffuse. I liked that because I feel like videogames are basically a kind of digital collage as well. 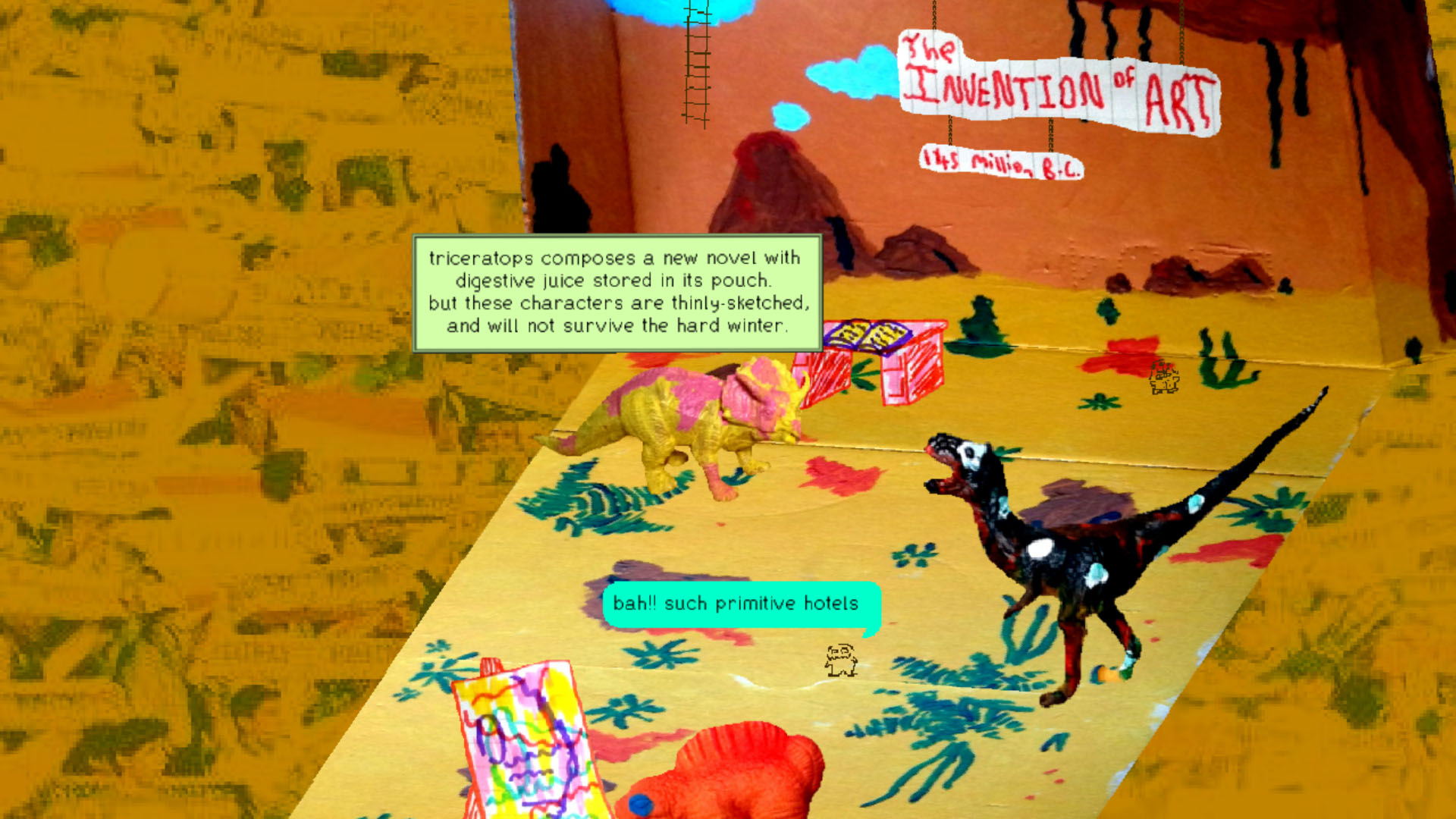 I miss the times when comic artists were genuinely excited to experiment with unusual formats. Mobile-friendly, standardized websites are now the norm for hosting webcomics, and they make the medium much more accessible… But we lost so much.

Winter K, the Monster Killers artist I mentioned, actually made the Twine game Rat Chaos! But yeah, I don’t know if the idea of using the tool to make weirdly structured comic-text things ever completely took off, unfortunately.

I think it worked out better for comics, to an extent at least, but I feel like over the past few years at least it’s become a recurring pattern where… people work out how to do cool stuff with a HTML browser, and then the browser developers turn off that feature for the sake of standardisation etc (while still carving out exceptions for the likes of YouTube).

I feel when people now play with form in surprising ways, it has to be more dependent on the idiosyncrasies of Twitter or Tumblr image handling… or at least exist in some form that cooperates with that stuff. 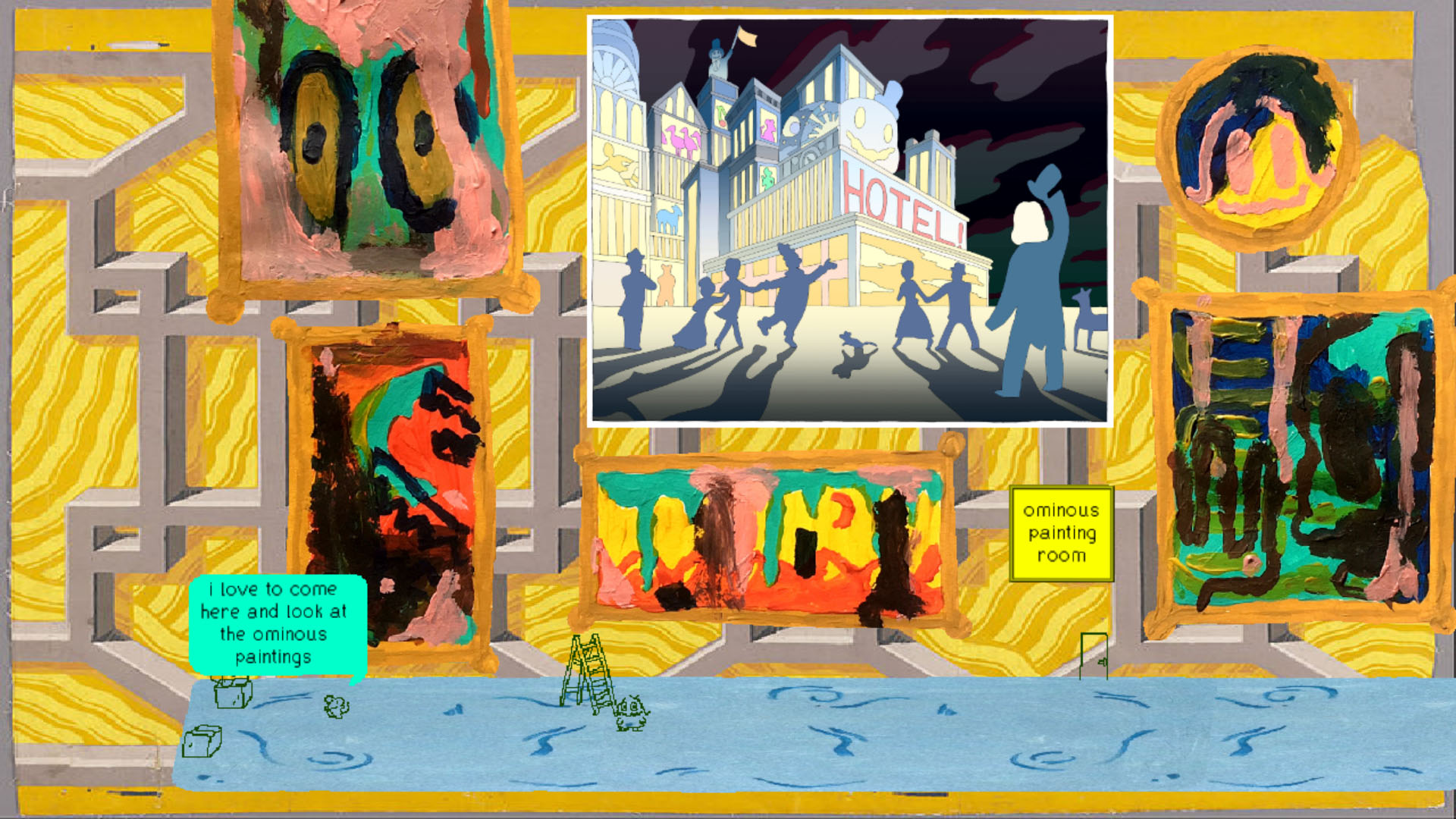 Artists now post comics on Itch.io as well, though! I’m happy to see so many artists on a games site — through sometimes the two communities feel like two groups casually inhabiting the same space.

I’m happy about seeing comics people on Itch too! I hope there are at least some games people finding weird comics through the platform and vice-versa, but it’s hard to really track that kind of cross pollination on a storefront.

Every time I look at the comics part of Itch, all the most popular titles are… Yuri on Ice fanzines.

I don’t know why.

I don’t even know why they’re there.

The Itch sales charts are a beautiful mystery. Every time I release a game, the top sellers for the week are either WolfQuest or FPV Freerider. It’s been this way for at least five years.

I don’t understand it, but I feel profoundly grateful for any remaining places on the internet which can still unsettle your expectations around what people actually get up to.

Speaking of unsettling expectations… Webcomics are a big inspiration to you, but I guess few people who played 10 Beautiful Postcards thought about comics while playing it. I bet most thought about games like Yume Nikki and LSD, or “fake old internet” games like Hypnospace Outlaw.

Does this annoy you? Sometimes I get the impression “weird games”, despite their variety, are considered a homogeneous genre-blob.

I’m happy to make weird games!! But it does bum me out a bit to think that there are people who’d enjoy a weird digital comic-environment-toy thing and that they’ll never see it if it’s contained in this box.

I really was inspired by stuff like LSD and Yume Nikki as well, but I sort of… Needed to go to them through comics. I think a big one as well was the reissue of Theresa Duncan’s CD-ROM games, which were done in a kind of Lynda Barry comics-esque art style, and also Suzanne Treister’s fictional videogame screenshots from the early 90s.

So it was kind of the case that the comics influence got me interested in trying to look for cross-format digital art in general, and stuff like CD-ROM games and Treister’s art from there, and then I could kind of go “Oh, this is like what Yume Nikki was doing” and feel like I was able to approach that game with a new mindset. 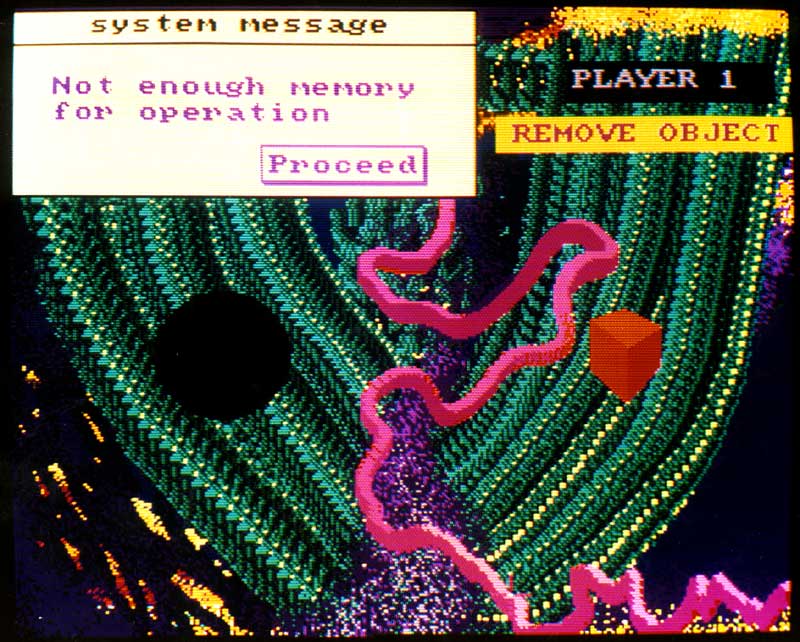 I think a thing as well is that medium-specificity kind of became the default way of handling art online. You have the comics sites and the game sites and the art sites and etc, as if they’re totally distinct categories. And because they’re all focused on just that one format, they sort of tend to miss out on the different lines that connect these things, all of the subterranean lines of influence.

That’s why this column exists!

I actually partly made the game to step outside that system, in the hopes that making a “children’s game” would let me smuggle it into the big box marked “child” which is kind of garbled together from all the official formats… I don’t think people are as fussy about separating children’s books from children’s films from children’s games, etc.

But the finished game ended up involving too much devil worship and I felt it might get me into trouble if I tried selling it like that, hahh.

Here in Italy we still get yearly debates about Halloween corrupting children. I… Understand the frustration.

I feel like with videogames as well the youth-corruption factor tends to be more prominent.

I remember giving a free 50 Short Games CD-ROM to a child at an Irish zine fair once, and it’s kind of haunted me ever since. What if his parents caught him playing the one game about the mouse who wears a shirt that says “I love to eat p*ssy and I f*ck like a dog”?

I wanted to avoid that situation this time, but was only 50% successful. “I made this game to […] worship the devil” – stephen, caught on tape, exclusive.

This is so gonna be our headline.

10 Beautiful Postcards is a cheery jaunt through thecatamite's brains

10 Beautiful Postcards is some new craic from thecatamites

Have You Played... Murder Dog IV: Trial of the Murder Dog?