Another day, another sack load of early, but definitely not Black Friday deals, this time on a bunch of gaming monitors. As with yesterday’s Samsung SSD deals, it’s entirely possible you’ll find better savings come next week when Black Friday proper really kicks into gear, but with plenty of all-time low prices on screens from LG, Samsung, MSI and Asus, there are still plenty of bargains to be had.

You can view them all here, but chief among the current UK-based deals is the Samsung C49RG90 – the same monitor I took an early peek at last week that looks really rather lovely running Red Dead Redemption 2 at its ludicrous resolution of 5120×1440. Currently going for £930 (down from around £1040 where it’s been sitting for the last month or so, and was £1000 before that), this is the lowest price this curved, 49in FreeSync 2 HDR monitor’s ever been, according to my CamelCamelCamel Amazon price tracker, and from my early test results (a full review is incoming later this week), it’s definitely looking pretty darn great – especially if you’ve got a graphics card that can make use of its 120Hz refresh rate, too.

If 49in is too big for your tastes, then Samsung’s LS34J550WQUXEN is currently down to £299 from £379. This 34in monitor is still quite a big’un, but its 21:9 aspect ratio and 3440×1440 resolution are definitely a lot more manageable than the CRG90. This has been fluctuating in price for a while, and was briefly ten quid cheaper last October, but £299 is still the best price it’s been since.

The Samsung LC27JG52QQUXEN has also been yo-yoing a bit over the last year, but its current deal price of £239 is the cheapest it’s been since December last year, where it was once again ten quid less. This is a much more traditional 27in monitor with a normal 16:9 aspect ratio, but its 144Hz refresh rate and 2560×1440 resolution make an excellent combo at this kind of price – and is a much cheaper way of getting a 1440p monitor than, say, the Asus ROG Strix XG32VQ, which has also been discounted to £439.

However, if 1440p isn’t enough for you at this kind of price, then it may be worth considering Samsung’s LU28E570DS instead. This 28in monitor has a 4K resolution and is currently at another all-time low of just £220. 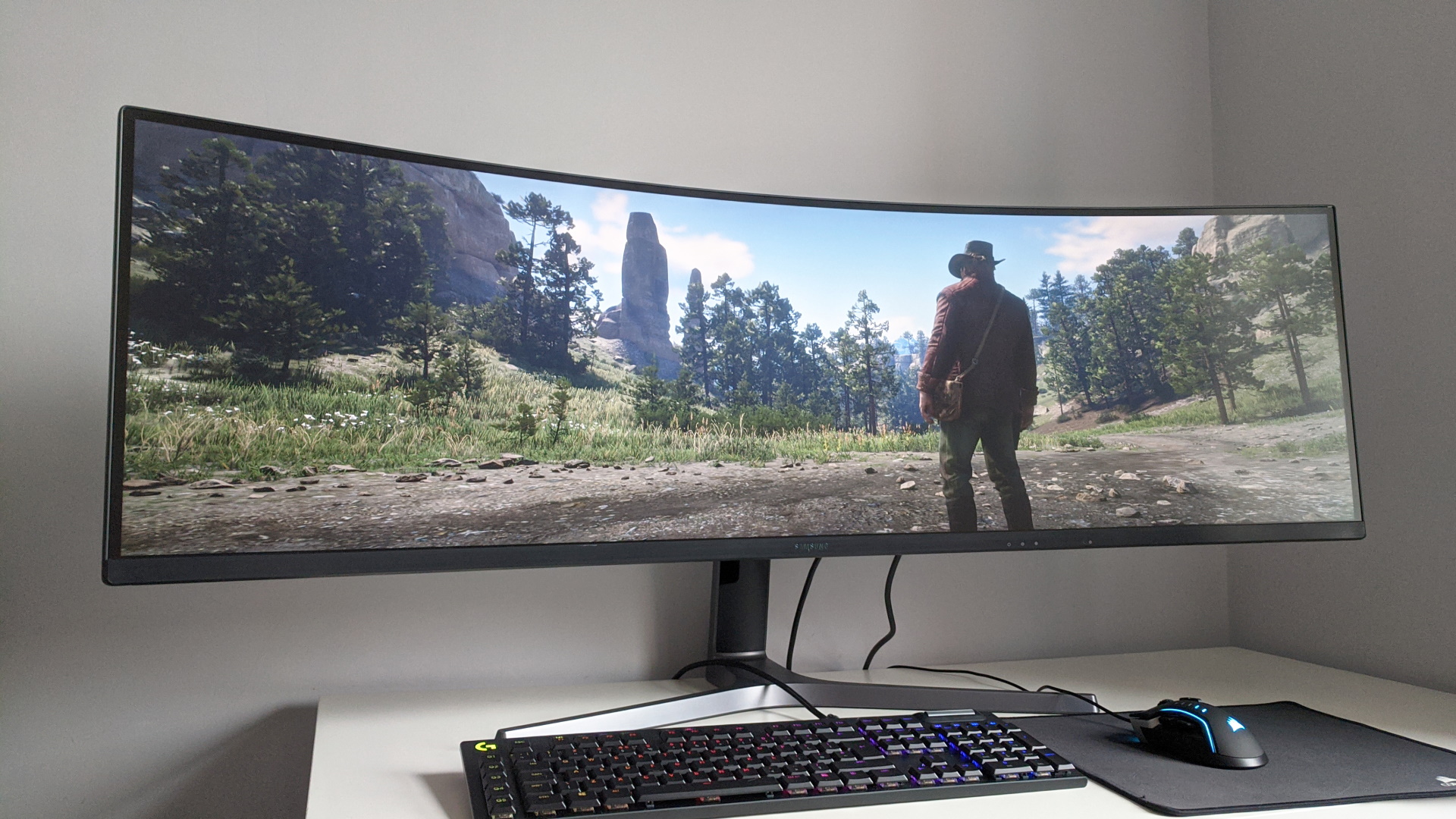 At the other end of the scale, we’ve got the Asus VG248QE, a 24in 1920×1080 144Hz monitor that’s currently just £165, down from around £245 and is another all-time low price. It doesn’t come with any FreeSync or G-Sync support, sadly, but that’s still a pretty decent price for a high refresh rate monitor – especially compared to MSI’s Optix MAG241CR, which is also on sale for £199. This is another 24in 1920×1080 monitor with a 144Hz refresh rate, but has a curved screen and FreeSync support. Don’t be fooled by its G-Sync Compatible claims on the product page, though, as there are currently no MSI monitors listed as being fully G-Sync Compatible on Nvidia’s website. You can still use it with Nvidia graphics cards as long as your graphics driver is up to date, but it’s compatible with a small ‘c’ rather than a proper Nvidia-endorsed big ‘C’. For more info, see our G-Sync vs FreeSync vs G-Sync Compatible guide.

Alternatively, there’s Asus’ VG278QR, whose 27in 1920×1080 165Hz panel does have FreeSync support, and is one of the few Asus monitors currently certified as one of the official G-Sync Compatible monitors, too, meaning it will play nicely with both AMD and Nvidia graphics cards. This is currently just £249, down from closer to £300. It was, admittedly a smidge cheaper back in mid-August, but only by another £10 or so. Otherwise, this is the cheapest it’s been all year.

Meanwhile, over in the US, there are more deals going on various Samsung monitors at the moment, including the Samsung CRG5. This 27in screen only has a 1920×1080 resolution, but it also comes with a whopping 240Hz refresh rate and is properly G-Sync Compatible. It was briefly a bit cheaper back at the beginning of October, admittedly, going for around $359, but its current price of $370 is still pretty decent – and a decent slice off its usual price of $400.

Then again, Samsung’s CJG56 is arguably even more appealing at $340. This 32in monitor has a larger 2560×1440 resolution for starters, as well as a 144Hz refresh rate, curved screen and AMD FreeSync support (although sadly it hasn’t yet been certified as fully G-Sync Compatible like its CRG5 sibling). It’s been $340 before a couple of times before, all told, but normally it sits around $380, so it’s still an all right saving in the grand scheme of things.

There’s also some decent savings to be had on a couple of Dell monitors, too, starting with the Dell Ultrasharp U2415. This 24in 1920×1080 monitor only has a 60Hz refresh rate, and doesn’t come with any kind of variable refresh rate tech either as a result, but it’s still hard to argue with at just $200 – another all-time low price for this particular monitor.

And finally, there’s the Dell Ultrasharp U2718Q, which is just one of the best 27in 4K monitors ever, because I own one myself. Admittedly, its current deal price of $399 isn’t the cheapest it’s ever been (its all-time low was $360 back in March earlier this year), but it’s still the lowest price it’s been ever since. Personally, I reckon this will be ripe for some better deals come next week, as it’s been sitting at this kind of price ever since the middle of October.

Of course, for all the latest (and proper) Black Friday monitor deals, make sure you bookmark our Best Black Friday and Cyber Monday monitor deals page for all the biggest savings. I’ll be updating this regularly with more and more deals as I find them over the coming week and a half, so do keep an eye on it if none of the monitors here take your fancy.

For more Black Friday deals-hunting, have a look at our other Black Friday hub pages, which are all linked for your viewing pleasure below:

After all, some retailers have already started on the Black Friday action, so why not have a gander and beat the crowds right now?