One of the things I appreciate most in an MMO is the ability to wander off and do my own thing. It might seem contrarian (and it is), but putting aside my awkward, antisocial nature, there’s real value in a busily populated world where you can opt out of the ratkilling race. Some argue that being able to play solo in an MMO defeats the point of the whole format. But then, arguing this relies on the assumption that if you play an MMO, you’re going to try to complete the game – that you’ll do whatever’s necessary to have the biggest numbers.

However, it’s exactly because of the fact that this assumption is true, for crowds of people, that stepping off the path to pick your favourite flowers is so appealing. Personally, I play MMOs because I want to live in a world a bit. I usually don’t want to become the all-powerful hero. I just want to wander about. See the bits someone else has made, maybe poke some of those bits to see what they do. I’ll probably specialise in something everyone else scoffs at. Gloria Victis is an MMO that seems to enable people like me. I’ve only played a bit, so it’s far too early for me to judge it fully, but you can usually tell right away if an MMO is going to fight you. Given that within mere moments of creating a character, GV let me run into its outskirts, where I began shooting pickpockets in the face and staring confusedly at diggers, I think it might be my sort of thing. I watched Blood and Sand. I know how this season ends. No THANK you.

Gloria Victis is a late-ish medieval RPG that somewhat emphasises realism. “Realism” is nebulous of course. Here it seems to be about combat and economics, as everything is mined and made by players, and to my great delight, even the starting weapons were capable of killing things more threatening than a Quaker’s pet rabbit. You’re plonked down in a faintly northern mediterranean-feeling city, and… well, good luck.

It’s in early access, so it’s a bit mean-spirited to rag on the tutorial. There is a window that tells you some things, but I quickly closed it because I’m like that. Nevertheless, I did note that it was pushing me to ask for a quest from a nearby soldier in fancy armour.

Sure, why not. Himerius is his name, and the job he has for me is “chase and kill the slaves”. Well, fuck that. Even if they weren’t gladiators, I’m not about to start my time here being the worst person possible. I jog away, and immediately see some thieves and guardsmen fighting next to a burning building. And, oh good, F brings my sword out. This is all pleasantly functional. MMOs in particular often have basic control and interface problems, but I get stuck into my first fight immediately. Left clicks swing and right clicks block, there’s a simple directional system, and it feels… yeah, this feels alright.

You actually get multiple weapons, too, which let you harvest the resources dotted about. I was soon picking herbs, mining a bit of ore and effortlessly lugging six entire tree trunks with me, presumably in my bra. 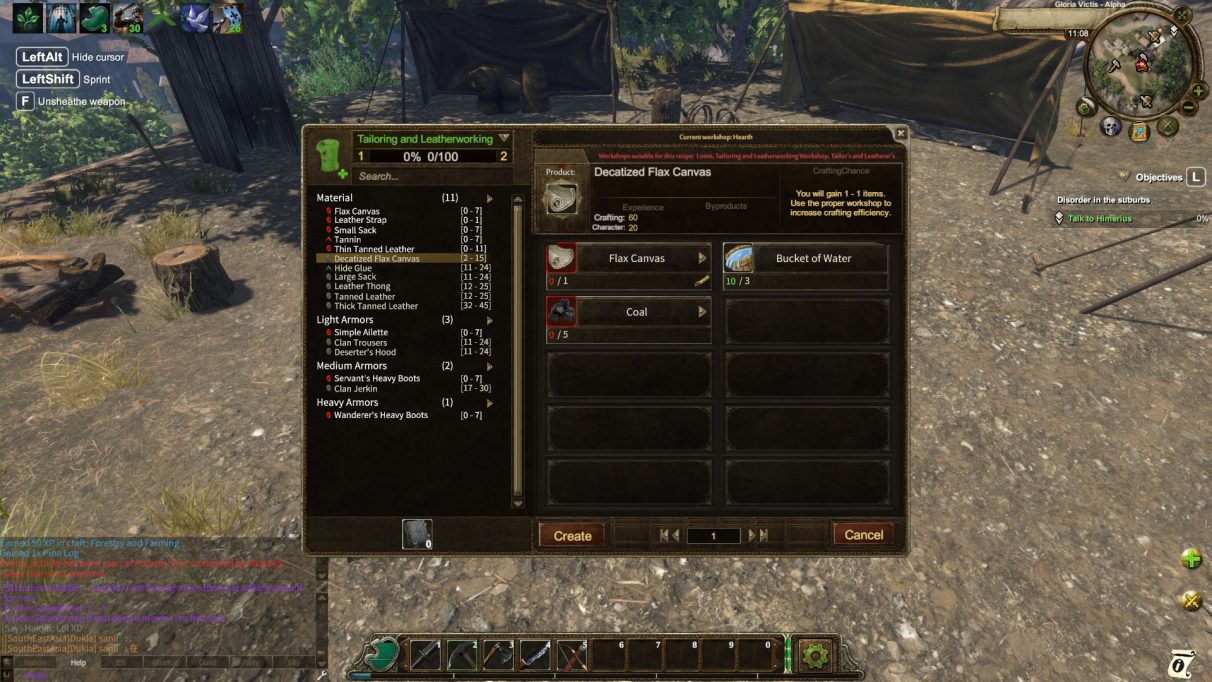 Starting characters are encouraged to specialise in one crafting category.

I kill more thieves and assorted angry suckers, who keep attacking the townsfolk as they amble around, and sometimes run away when they realise they have two arrows sticking out of their face and their spree probably isn’t going to work out how they’d hoped. Mostly I shoot them, since I plan on being a wandering hunter-sort, although skills are upgraded through a point allocation system, rather than by practice.

Progression comes pretty fast – I hit level 5 in under an hour, and all I’ve done is wander around within the city. A brief excursion outside takes me close to those escaped gladiators, one of whom is fighting some wildlife. Another positive tick, there. I keep my distance though, and befriend a rando. Haidin is their name, and they’re a very friendly sort. I declined their invitation earlier, but then I happen to bump into them as they’re helping another player practice with a ballista, and we become comrades.

Other players are fighting more of the endemic bandits, while others dig in some sort of pit, presumably for resources. The city has some life, as NPCs chat about named characters and lament the ongoing fighting. I dig into my inventory, and use some work spots – logging sites, campfires, that kind of thing – to turn some animal parts into leather. I could make some tool or weapon components too, but for now I hang on to everything. Gloria Victis starts me out with lots of crafting recipes, and a chat with an NPC vendor suggests I can buy books to learn more. It’s all very… playable, for lack of a better word. 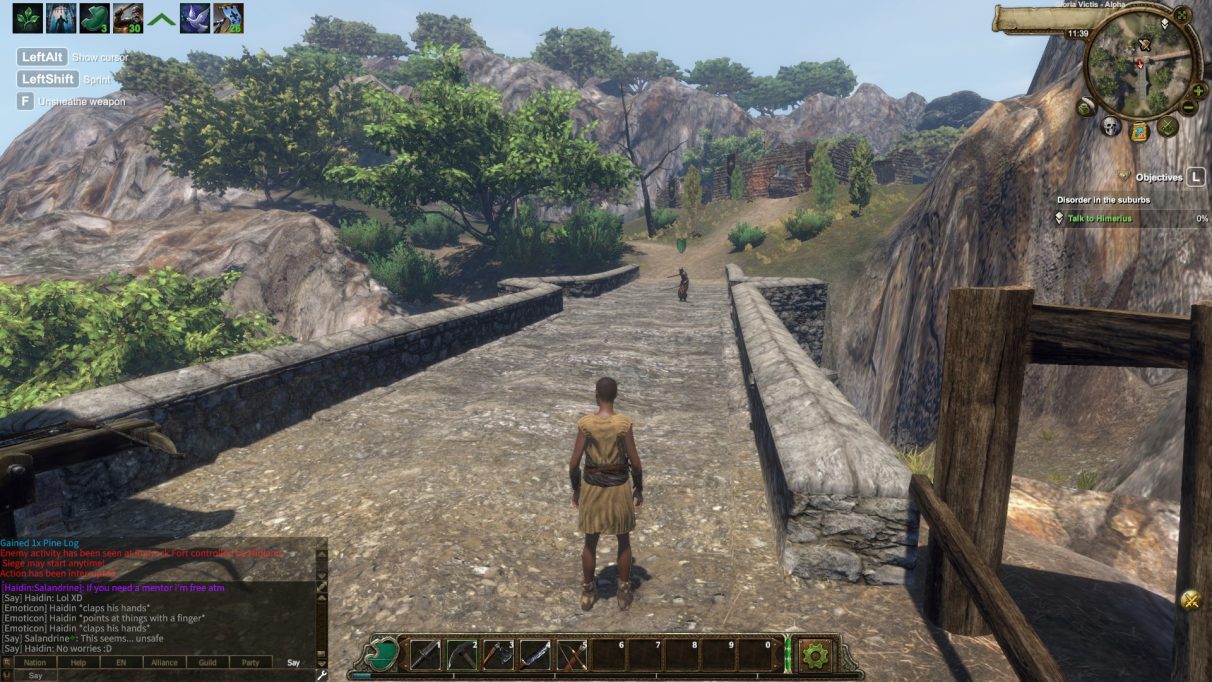 Haidin helps another new player by taking a ballista bolt to the face. As you do.

As I trot around town I get frequent notices that “we” have captured or lost buildings or strategic sites, none of which I have any knowledge of. It turns out there’s some sort of eternal war situation between the player nations, and outside the starter town there’s open PVP to be found, alongside all the co-operative PVE, harvesting and industry stuff I was aware of. You choose a nation as part of character creation, apparently.

The ever-helpful Haidin informs me, after I relay my plans to wander and tinker and that, that the nation I’ve picked is the worst possible choice for my preferred play style. Apparently, successes in various global skirmishes and contests grant bonuses to the winning sides. I don’t doubt him on any of this, but I don’t really mind, either. I’m enjoying doing my own humble little thing, which is exactly what I was hoping for.

I’ve barely scratched the surface of Gloria Victis, but I’m very glad that so far at least, it is content to let me explore and observe, and figure out what I’d like to do instead of being told. I’m pretty sure that as soon as I take a step too far in the wrong direction I’ll get ripped in half by a mathematically invulnerable player, or the same boar I’ve killed four of, but with bigger numbers. But maybe I can contribute to everyone else’s big old war, by doing my usual hobo herbalist thing? I think I’ll be making more time for this one.

Gloria Victis is currently in early access, with a currently unknown release date. It’s available now on Steam, Humble for £15/€20/$20.