On a dinky asteroid orbiting the Earth, two symmetrical ziggurats mark the red base and blue base. Each sniper-lined tower guards a flag, and their confined spaces contrast with the exposed and treacherous bridge between them. It is elegant, simple, stark against a grand sci-fi background. This is Facing Worlds, a level in the once dominant first-person shooter Unreal Tournament. This modest map has created countless memories of squaring off with friends over LAN and modem since it first appeared in 1999.

Before Fortnite and the Epic Games store, there was Unreal Tournament. 20 years have passed since Epic Games and Digital Extremes released their critically-acclaimed sequel to Unreal, and just one since an ambitious crowdsourced reboot was quietly shelved. Still, the original remains a touchstone for twitchy FPS multiplayer, and Facing Worlds, or “CTF-Face” for “capture the flag”, is a microcosm of everything great about it.

Facing Worlds was designed by Cedric Fiorentino, who created levels for the Unreal franchise under the moniker “Inoxx”, before working with the likes of Ubisoft, LucasArts and, most recently, as creative director at Virtuos Games in Singapore. 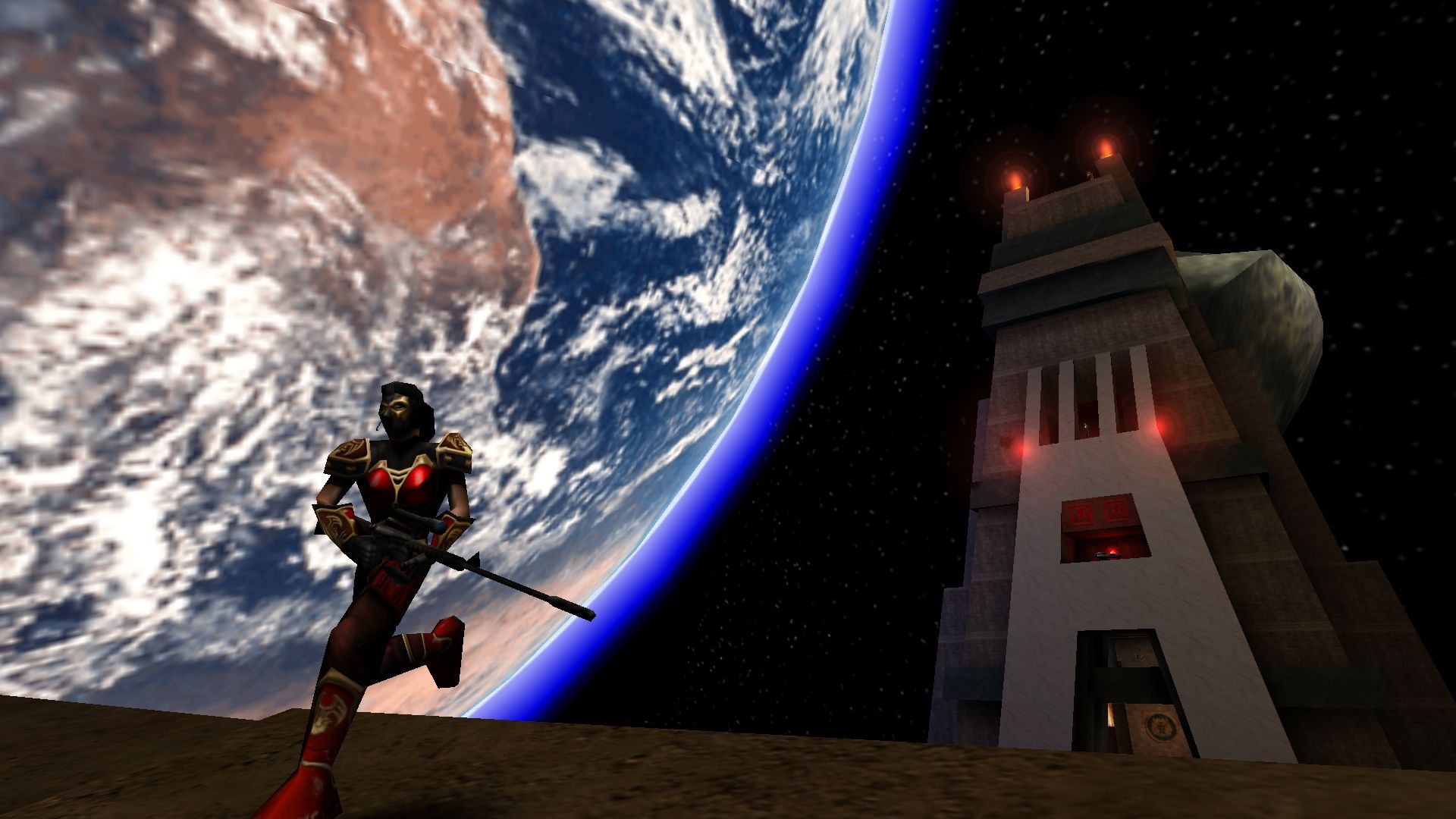 The original in Unreal Tournament

Fiorentino tells me he didn’t realise how successful Facing Worlds was for quite a while. “There was a lot of praise online and a good reception of the level in the media and forums, but it wasn’t until we had the telemetry up and running that I realise that it was basically played more than all the other CTF levels combined.”

Facing Worlds’ iconic towers have been remade in every subsequent Unreal Tournament game, but it is Fiorentino’s original which Epic’s Jim Brown described at GDC 2014 as a “masterpiece of simplicity… representative of a generation of design techniques that we are starting to stray from.”

Unreal Tournament’s development was not traditional. It began as an add-on for Unreal, with loosely structured development teams split between Ontario and North Carolina. Fiorentino’s journey to Epic was similarly unorthodox. He was hired after sending a floppy disk of Epic Pinball animations to Tim Sweeney. “I got the game from a floppy in a magazine,” he says. “I opened the read.me file and saw a message from Tim Sweeney asking for people to submit their artwork. I had a few renderings and animations I did in 3D Studio at the time. I put those on a floppy and sent it to the address.” Fiorentino got a reply from Sweeney a few weeks later, inviting him to the Epic’s US studio. Soon after that, Fiorentino started working on Extreme Pinball 2, and then Unreal, from France. 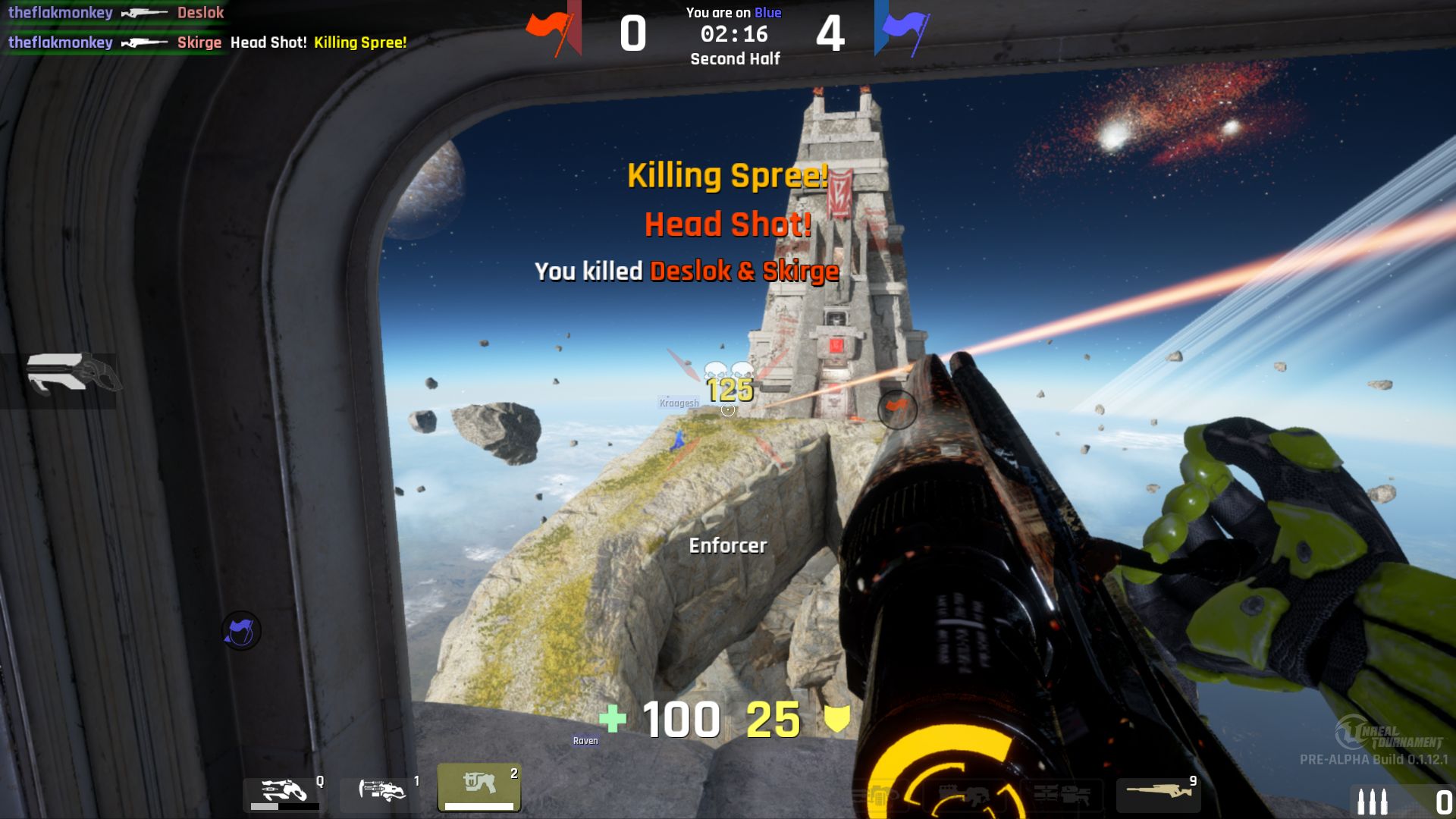 “It was pretty amazing to work with so many talented individuals,” says Fiorentino of his colleagues at Epic, several of whom became prominent industry figures. “Everyone came with their own perspective and sensitivities and it all gelled into a game that was the sum of all those somewhat disparate interests.” Cliff Bleszinski, for instance, was focused on “gameplay, playability and creating a cinematic user experience.” James Schmalz was a “jack-of-all trades who could do art, design, level design, programming, modelling, animations, and also run a company.” Sweeney was the author of the Unreal Engine, “trying to unlock the creativity of artists and designers by creating powerful, intuitive tools.”

The time Fiorentino spent working in France invited complications. “It was very challenging with the primitive communications and network of the time,” he says. “Everything was done by email, getting builds was better with CD and FedEx, and playtests were basically impossible with 600ms ping times.” During Unreal Tournament’s development he moved to Waterloo, Canada, then to Epic’s headquarters in Cary, North Carolina. That was where he created Facing Worlds.

Facing Worlds emerged organically as Fiorentino prodded at the Unreal editor’s capabilities. “CTF-Face started as a test,” he explains. “For Unreal Tournament, we had a limit of 160 polygons visible at the same time. You’d typically spend half of your polygon budget on the landscape and have 80 or 70 left for your structures.” This meant levels typically had simple architecture with complex elements concealed from view. To prioritise visual impact, Fiorentino tried the process in reverse. “I wanted to see what kind of landmark architecture could be built if I allocated all my 160 polygons for the buildings, and worried about the landscape later.” He started with something “that looked vaguely Mayan but not too recognisable,” he says. “You couldn’t do many steps anyways with 160 polys in view. After several iterations on the various angles, windows, platform elevations, lift and teleporter placement, it settled to its final form. I duplicated the towers, linked them by a bridge and tried the gameplay.” 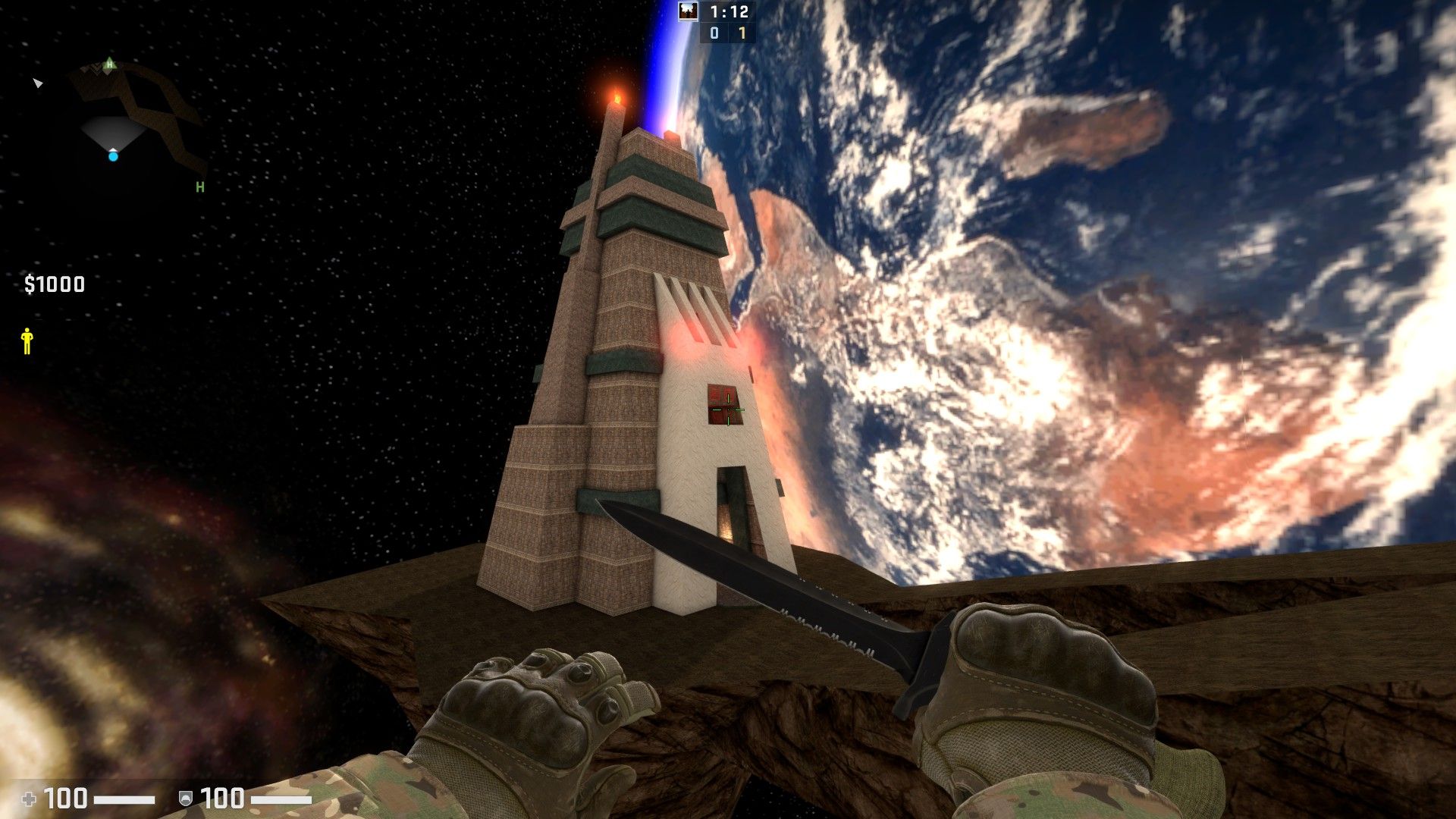 A mod recreating it in CS:GO

As they tested, its defining strategies emerged – like hanging back inside your tower’s recesses to snipe opponents while teammates tried to grab their flag, or hiding inside the other team’s tower to snipe them from behind. “Every game had this escalation of incursion > defense > take out defenders > take out attacker’s support, and so on, creating an almost chess-like succession of moves and counter moves,” says Fiorentino. “People discovered counter-intuitive moves like taking a flag and teleporting up the enemy tower, then jumping down on trims, or getting to the flag room by translocating up to the various levels and teleporting down. It was surprising that such a simple playing field could generate so many strategies.”

After exhausting his polygon budget on the towers, Fiorentino ornamented the level with the skybox – a backdrop formed by texturing the inward-facing surfaces of a cube. Placing the level in space helped disguise parallax errors, while a bug revealed the skybox could also be animated. “I made it spin, creating the impression that the whole level was spinning on a chaotic orbit above the Earth.” It was initially moving about four times faster and made players ill. Fiorentino slowed it down, creating “this chill, slow movement in the skybox contrasting with the ferocious combat on the ground, and that contrast was also present in the music with slow, long strings matching the pace of the drifting world and the fast jungle/dnb beats matching the action.”

Composer Michiel van den Bos was responsible for Facing Worlds’ hypnotic soundtrack, Foregone Destruction. “I heard the track and loved it right away,” says Fiorentino, “it was such a natural fit for the level.” 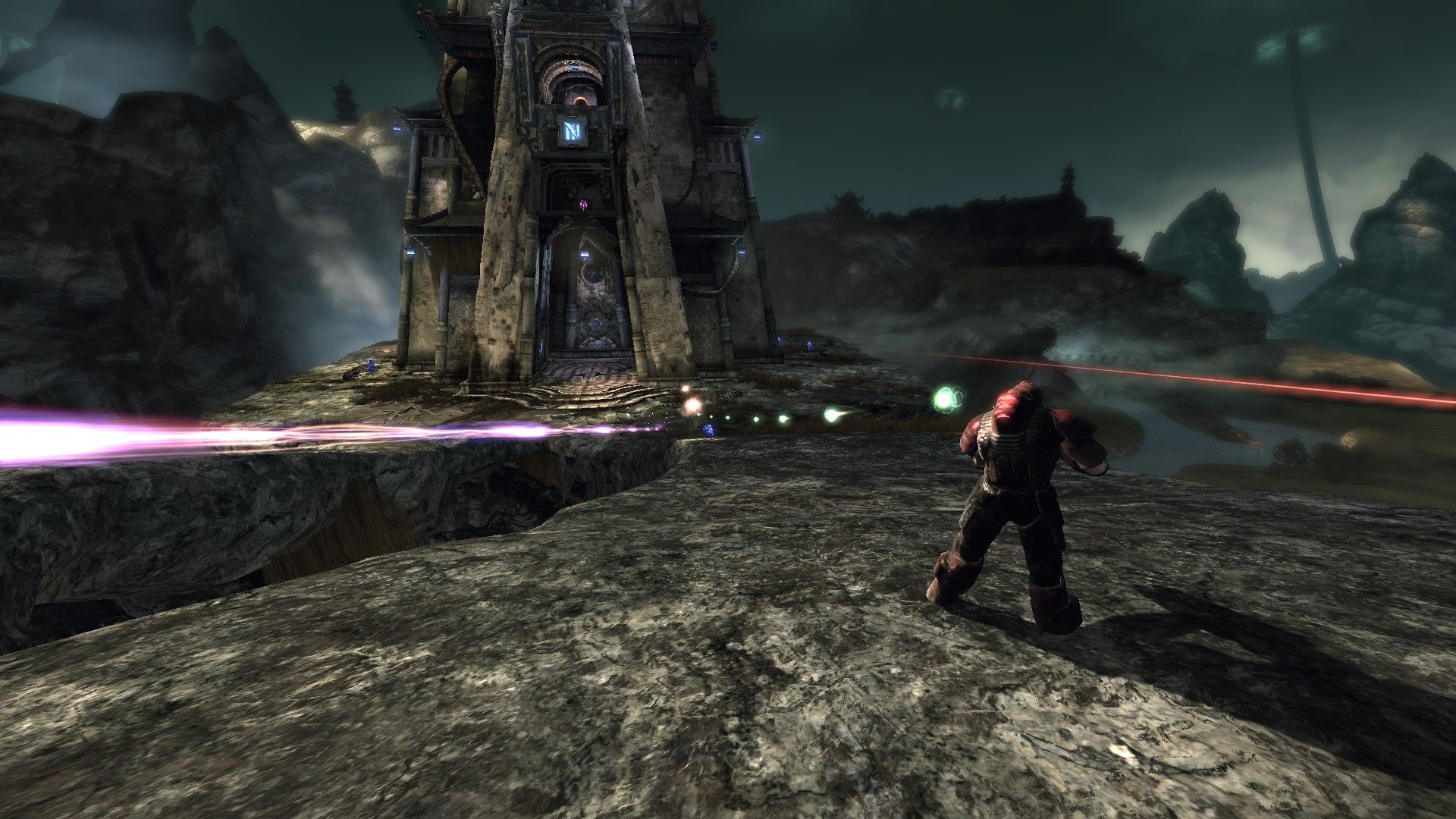 “I think the combination of the map and the music was pretty much perfect and that’s what stuck with people,” says van den Bos. Given the synergy, its surprising to learn that they were created with minimal collaboration. “I was basically just making songs without knowing much,” he says. “I didn’t have the hardware to run the betas so I relied mostly on text explanations. We knew it was an online shooter so we just went with that with regard to the tempo and intensity of the tracks.”

Instead, the direction came from the composers’ personal tastes. “I was, and still am, very fond of Drum ‘n’ Bass,” says van den Bos, “and since I hadn’t heard it utilised in games before, I thought I’d give it a shot.”

When Jim Brown described Facing Worlds as a “masterpiece of simplicity” at GDC, he praised its “clean use of space, visual clarity and flow.” For Brown, the level had lessons for contemporary designers, including those at Epic. “UT3 definitely made things way too complicated,” says Fiorentino. “Since then, industry-wise, there’s been a more concerted, formalised UX-centric approach, and this has a tendency to steer design towards simplicity. Epic definitely mastered this transition with Fortnite,” he says, “and the benefits are obvious in terms of accessibility and the breadth of the appeal to various demographics.”

A version of Facing Worlds which is closer to Fiorentino’s original was among the first high-textured maps produced for the canned reboot, while it regularly appears as a fan-made modification for other games, including Halo and CS:GO. “It’s always great to see that something I did so long ago still has some appeal and relevance over time,” says Fiorentino. “It’s also interesting to see a piece of virtual “real-estate” work with various game mechanics.

“It’s heart-warming to see people remember fondly something as trivial as a game level made 20 years ago,” he adds. “But that’s why I and many game designers do this job every day, to get a chance to touch people’s lives and bring them somewhere they didn’t think was possible.”