As I write this I am on my week off, so I don’t have to be professional. Blarg bloog bleeg. You see? Not even real words. I can say what I want. They knew what would happen when they hired me. This is on them. Or, I might just openly berate you for not playing Wildermyth, a tactical RPG with turn based combat. It launched into early access a couple of weeks ago.

Fine. I’ll throw you a bone. Let me tell you about the Sisters of the Vine. 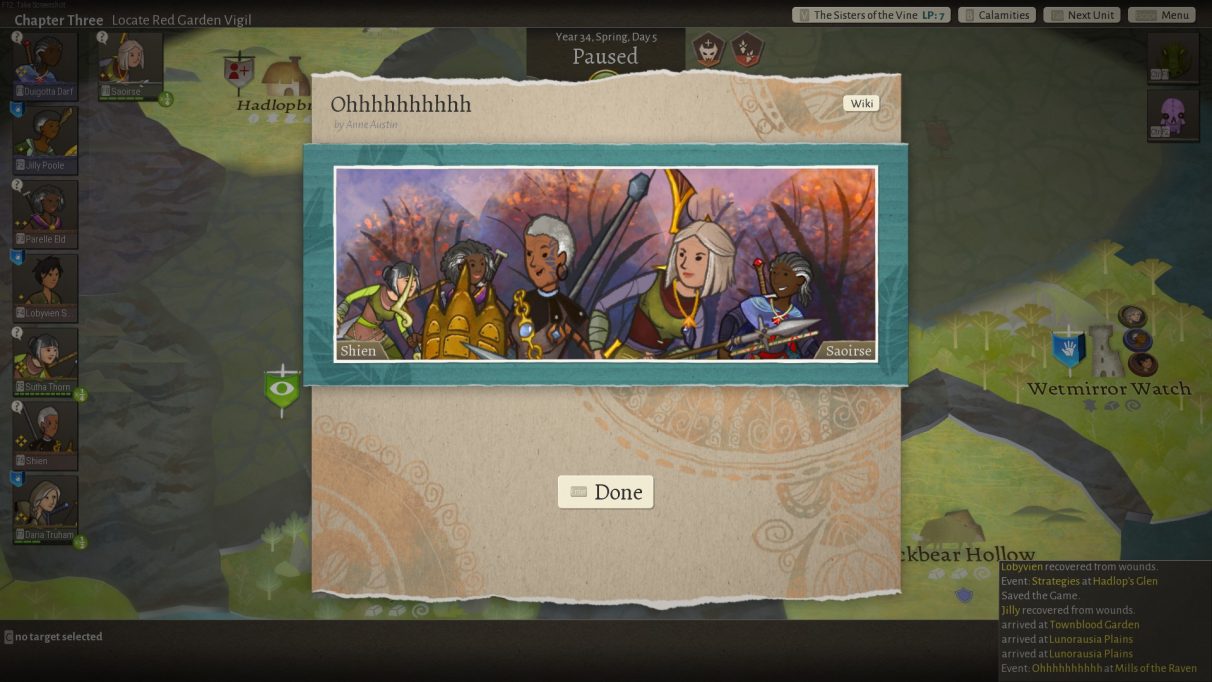 One of several Sisters lineups, which fluctuate due to injury, retirement, death, and subplot circumstances.

The Sisters were three farmers who defended their village from monsters. That’s the standard opening, and broadly, every story in Wildermyth is similar. Your ordinary people set out to stop a menace, clearing out each region and then assaulting a stronghold. You can also go straight for the stronghold, but then your characters will be weaker, fewer, and less interesting, and you’ll get fewer resources and callbacks between chapters.

Chapters? Oh yes. Three or five of them, during which you campaign against a terrible threat, sometimes not even knowing what it is. When you put it down, your people get a long period of peace, its length depending on how well you did. In the meantime, your characters age, they grow, and have stories of their own. They can die, too. They fall in love, they have kids, they chase dreams and make terrible decisions.

Shien was a founding member of the Sisters. She was the clown. She had a pet chicken that started fires. She accidentally joined a cult once. 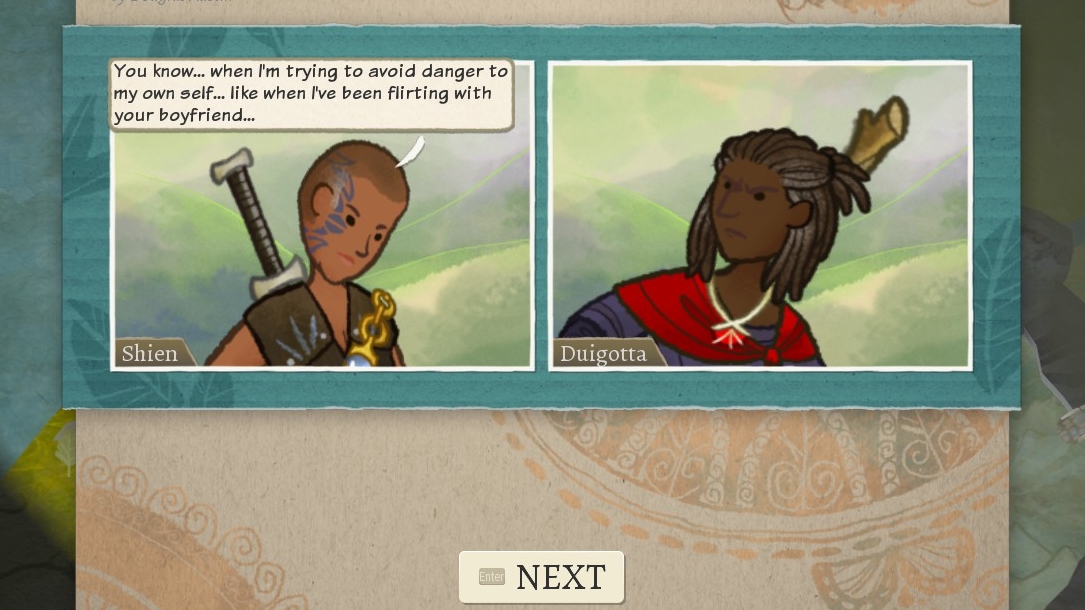 Even when you see subplots repeated, dialogue varies based on personalities and relationships.

She was also absolutely terrifying in battle. A lifetime of battling against the monsters that attacked her village made her almost untouchable in combat. She led the charge, held the line, and utterly crucified anything that came within range of her spear. She would scream at attackers until they fled in terror. Gandalf had to shout to make it clear that nothing was getting past him. Shien just exists. This is how she looked after three chapters. 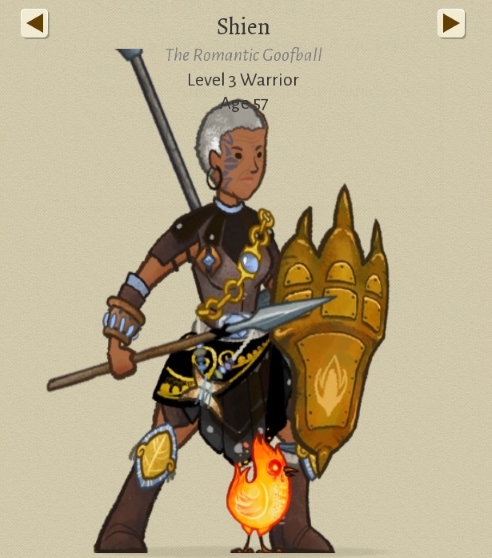 Shien am not can be stopped.

Characters start out randomly generated (though customisable), sorted into warrior, hunter, or mystic, each gaining different (though sometimes overlapping – mystics can fight, warriors can shoot, etc) special skills when they’ve developed enough as a person. I couldn’t even tell you how XP is handled, but more often than not, characters will reach a development milestone following the resolution of a subplot they led. It’s those subplots, and the chaos and chance of battle and your own colliding decision,s that will make them people to you, not just a collection of traits and numbers.

They can die. Oh god, they can die. Even an experienced warrior might go down after two hits. It’s brutal. I felt personally wounded every time someone fell in battle. And then there was Daria.

Daria was the first hunter of the Sisters of the Vine. She was a coward, yet somehow the heart and soul of the group. She’d run from any close fighting, but when a mentally ill old man convinced himself she was his daughter, she saw how sad and confused he was and played along, promising to visit him again after the war.

Sutha was her friend and fellow hunter. In their third chapter, after fighting side by side as friends from their 20s to their late 50s, Sutha suddenly realised that Daria was no longer Daria. Something had taken her over.

Wildermyth is a game that might possess your favourite character off camera, and ask you to make her dearest friend mercy kill her. 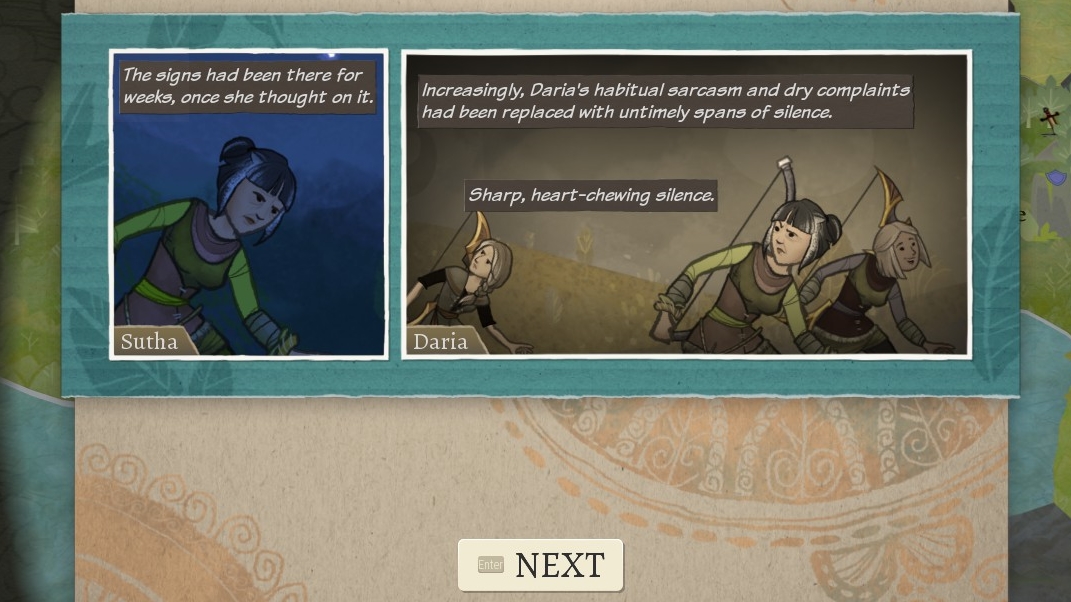 The writing and art are an absolute masterclass in the power of brevity.

You don’t have to.

The Sisters recruited Saoirse, too. The same Saoirse whose arrows protected Anthai the mystic at the final battle of the Thrush Rascals, one of the most dramatic experiences I’ve ever had in a game. 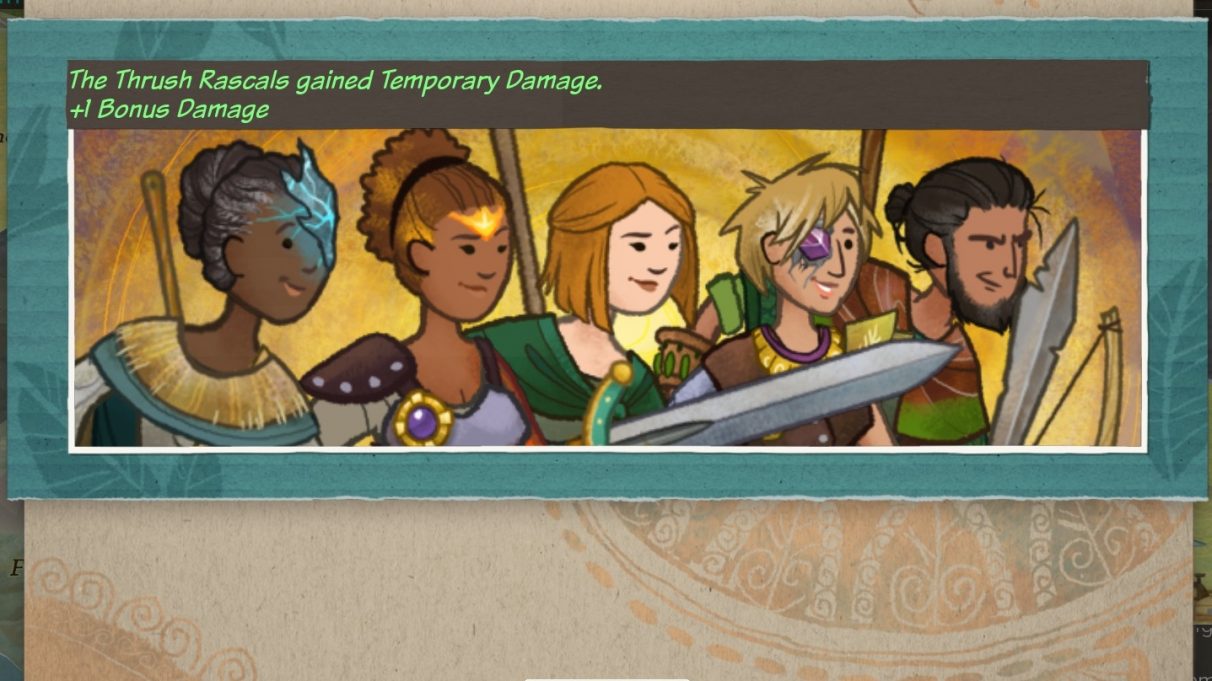 Most of the Thrush Rascals. They were a lot greyer and even more mangled by the end. It happens.

Characters die, see, but they’re not gone forever. You can choose to keep them as legacy characters, who become available to recruit in later stories for an increased cost (and can become more powerful if they survive multiple campaigns, making the even more brutal higher difficulties and longer campaigns slightly more manageable). So Saoirse was a Sister of the Vine and a Thrush Rascal, as well as being the daughter of the first Wildermyth character I ever created. She fought with her mother, Arvai the crystal warrior, at one of the greatest and most harrowing battles I’ve ever had in any game. She put an arrow in the brain of everything that threatened her wounded friend Anthai, whose life hung by a thread even as she used magic to sprout trees to protect Arvai, then shatter them at enemies in a hail of deadly splinters. 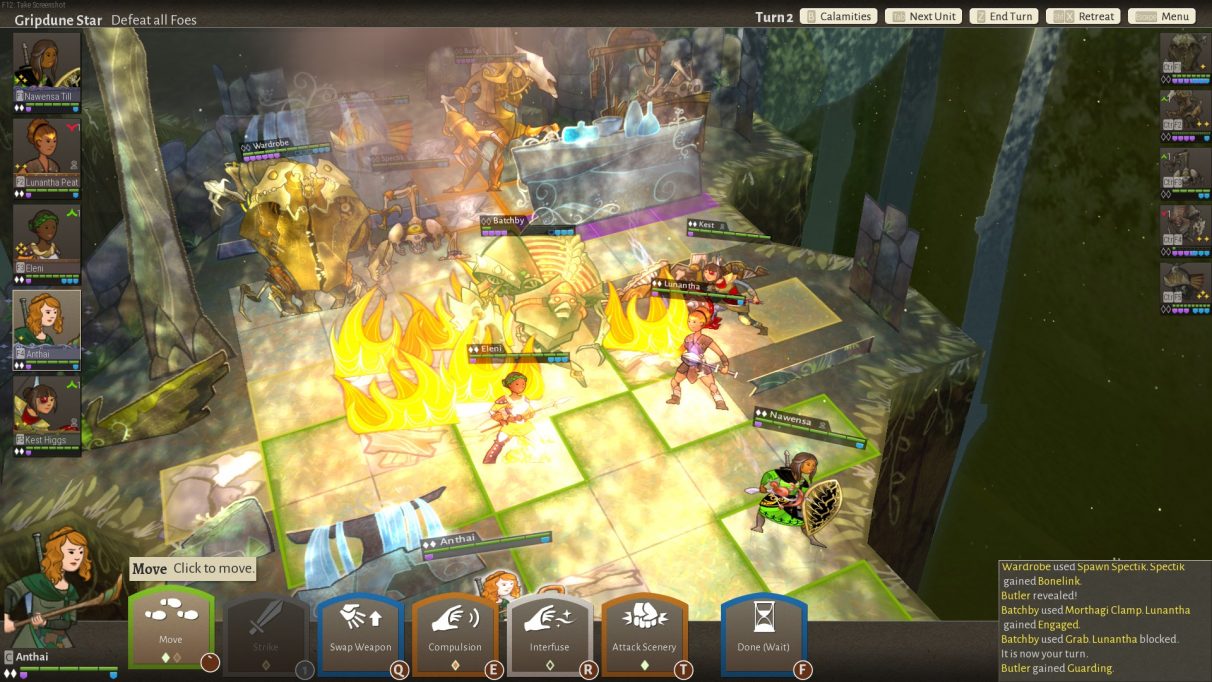 The Stone Maidens are almost all dead and they still have 3 chapters left. XCOM are a load of wusses.

The magic in Wildermyth is terrific. You bond with scenery items and use them to attack or immobilise monsters, or defend your team. Anthai and Logsa did all three in that battle, as well as fighting with swords and axes, until Logsa, the leader (there’s no formal leader. It’s just who you interpret as one), was killed. It took the flawless, heart-in-mouth performance of the other four to pull it back until Arvai was finally close enough to charge the beast with her rapier, and Lunantha dashed in to set it on fire. Everyone was one mistake from disaster, but they made none. It was magnificent. 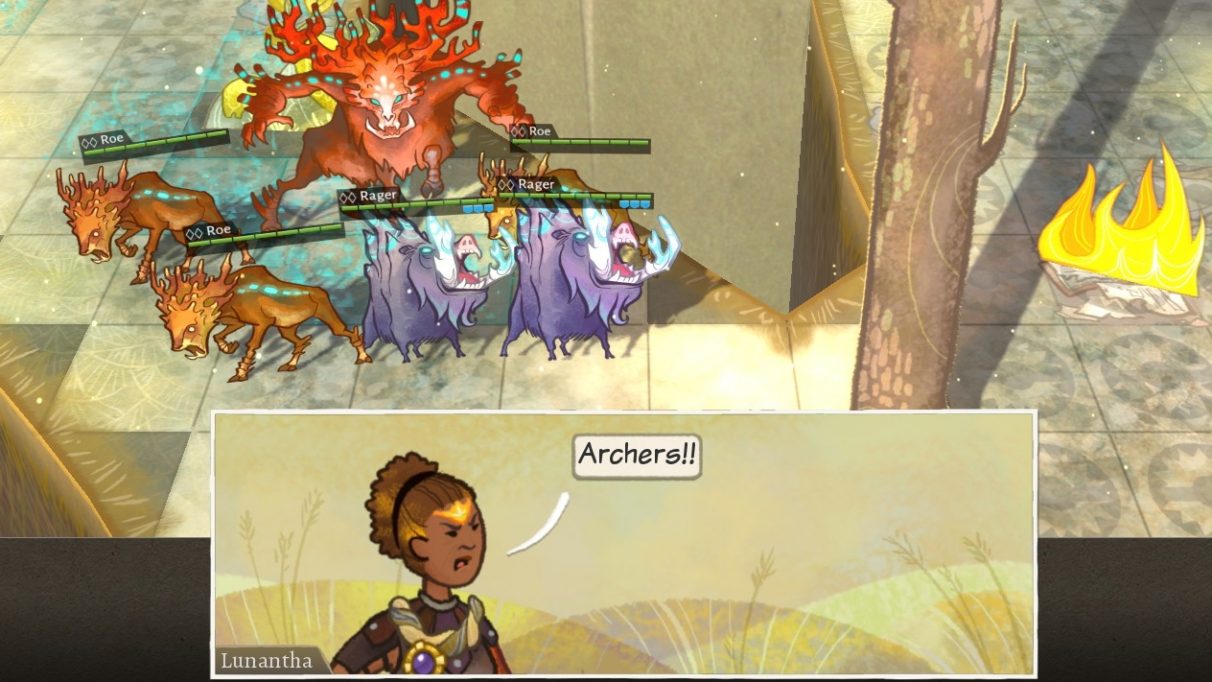 I should stress that there are much less harrowing difficulty options. And that Lunantha is my idol.

Wildermyth lives inside your head in a way that I can compare only to 80 Days and Six Ages. And I haven’t even told you about the time the Stone Maidens lost three people in a single battle, until Kest the rogue snuck past the overwhelming army and assassinated their leader in a bid to save her lover’s life. Or the time Orthai asked her friend to cut her arm off and incorporate its tendons into a disused tunneling zombot to help them both escape from prison. Or the time I took a week off work to catch up on a dozen games and spent the whole time playing one simple, beautiful, brilliant game that I absolutely demand you all support so its creators can make more of it. It’s in early access but already well worth it on Steam and itch.io.

Wildermyth knows that levels are bad

I am not a number

It's my party and I'll die if I want to

The best of Unknown Pleasures 2019