There are a metric tonne of portrait mods for Stardew Valley. On Nexus Mods alone, there are 305. DCBurger’s Portrait Mod is the most unique that I’ve seen but by the time I found it in 2018 it had already been removed by its creator. After two years away, DCBurger has returned to upload the original.

Stardew Valley’s modding scene is extremely prolific, only surpassed by giants like Bethesda’s RPGs and Minecraft. Portrait mods are a popular cosmetic change that remove the dialogue busts from the game and replace them with fan art versions instead. Fan portraits come in several different varieties. Some turn every character into monsters. Others change genders. Many, many of them are styled as anime versions either in excessively cute chibi style or dazzlingly beautiful bishounen.

Of all the oodles of new faces available, DCBurger’s are my favorite. The grittier portraits stand out from the pack. They’re darker in color and tone. Most characters have lines on their faces and strong, square jaws. They aren’t glossy anime style but they are lovely nevertheless. These versions of Stardew Characters remind me of grimmer classic shows like Cowboy Bebop. 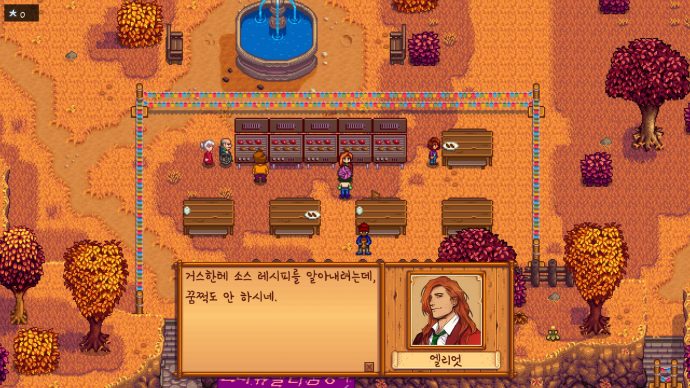 Not everyone loved DCBurger’s portraits. The creator removed the mod from the Stardew Valley forums and Nexus Mods in 2017 after getting more critique than they cared for. “It was loved more than I expected, but at the same time, I was asked and criticized for its criteria of femininity,” they say. Unfortunately, other modders saw the absence as an opportunity and began uploading their own versions of DCBurger’s mod. Some were modified or edited against the creator’s wishes.

Now, as part of a push to keep control of their work, DCBurger has re-released their creation on Nexus Mods and is maintaining an archive tracking altered and re-uploaded versions of the mod. They have also submitted copyright claims against a YouTube channel using edited versions of the original art. DCBurger says they have brought it back “because deleting the original post and permissions only work in favor of copyright abusers.”

It sounds like the return of DCBurger’s standout mod is mostly driven by copyright concerns and doesn’t necessarily suggest they plan to create new works. Art theft isn’t a new concern in fan art communities so it’s good to see a creator taking their credit where it’s due.

You can download DCBurger’s Portrait Mod from Nexus Mods. Be sure to take note of its dependencies on the Stardew Valley Modding API, Portraiture, and PyTK. It has been updated for the newest 1.4 version of Stardew Valley.