What is the true hallmark of a BioShock game? According to the press release about the new 2K-founded studio Cloud Chamber, wot is making a brand new BioShock, it’s “iconic, first-person shooter gameplay”. Before Binfinite came out, original series lead Ken Levine said in an interview that it’s the “incredibly detailed world” each game lets you explore. Or maybe it’s the PoLiTiCs? BioShock, famously, includes a pretty basic critique of the wet fart that is Objectivism, causing people either to argue it was a searing work of political genius, or be furious that it wasn’t a work of searing political genius. Perhaps it’s the settings? BioShock and BioShock 2 were set in an underwater city, and Infinite was set in a floating one. I can only assume the new one will just be about a normal city. But run on centrist principles. The most dystopian system of them all!

But of course, none of these things are really the hallmark of a BioShock game. What truly makes the series stand out is that you can shoot flying animals out of your hand, because of DNA. And I think we all know what that animal should be used as ammunition in the new BioShock.

The Plasmid/Vigor business remains the best thing about BioShock, not only because they have a cool mad-science origin, but because they mean that I can be a terrifying wizard and have a big shotgun at the same time. The dream! The animal ones are especially good, because you simply cannot think about them for too long. Like, your DNA has been manipulated to the extent that you… what? Spontaneously generate other, complex organisms from your body? Is this God’s DNA?

In the first game, it was bees. This was great because a swarm of bees can clear a street faster than twenty seven farts done at once. Just look at what one can do to a school classroom IRL. Plus in an underwater metropolis, you can’t open a window to let the furious little pricks out. In Infinite it was crows, because Murder Of Crows is a good name for weaponised corvids, and I would never take that away from the dev team. They played a blinder there.

So on the basis that Cloud Chamber are basically obliged to include some sort of arm-based beast cannon, Nate and I spent ages discussing what the best animal missile would be for BioShock 4 (??) and have come up with: a single albatross. When you think about it, it is the clear answer, and the only viable design option. I will start a change.org petition if I have to, so help me.

Firstly, there’s the moral imperative for Albatross inclusion. And I will presage this by reminding you that albatrosses are just generally pretty boss. They can travel a thousand kilometers in a day, without actually flapping their wings, and can make it all around the world in 46 days — that’s almost twice the speed of a rich Victorian Londoner and his French servant! They deserve our respect.

Yet, albatrosses are being adversely affected by our own hubris, at the hands of climate change. Violent storms, combined with a uniquely stupid evolutionary trait that means albatrosses recognise their young by nest, rather than sight or smell, mean that chicks blown from their nests aren’t recognised by their parents. Meanwhile, some breeds are seeing their nesting grounds flood each year before their eggs can hatch. It is all very sad.

So: Cloud Chamber are in a unique position to raise awareness about albatrosses here. By allowing the player to violently fling these majestic beast-mode seagulls at unsuspecting enemies, they would be saying: more albatrosses in the world is a good thing.

The second, and most pressing, reason for getting the ‘tross into the next BioShock is purely practical. An albatross has, from a game perspective at least, great combat capabilities. An albatross is truly fucking massive. They can reach over three meters in width. Think about your own height and then consider that you are probably not even half of an albatross. (That width does count the wings, mind. But imagine if it didn’t.) 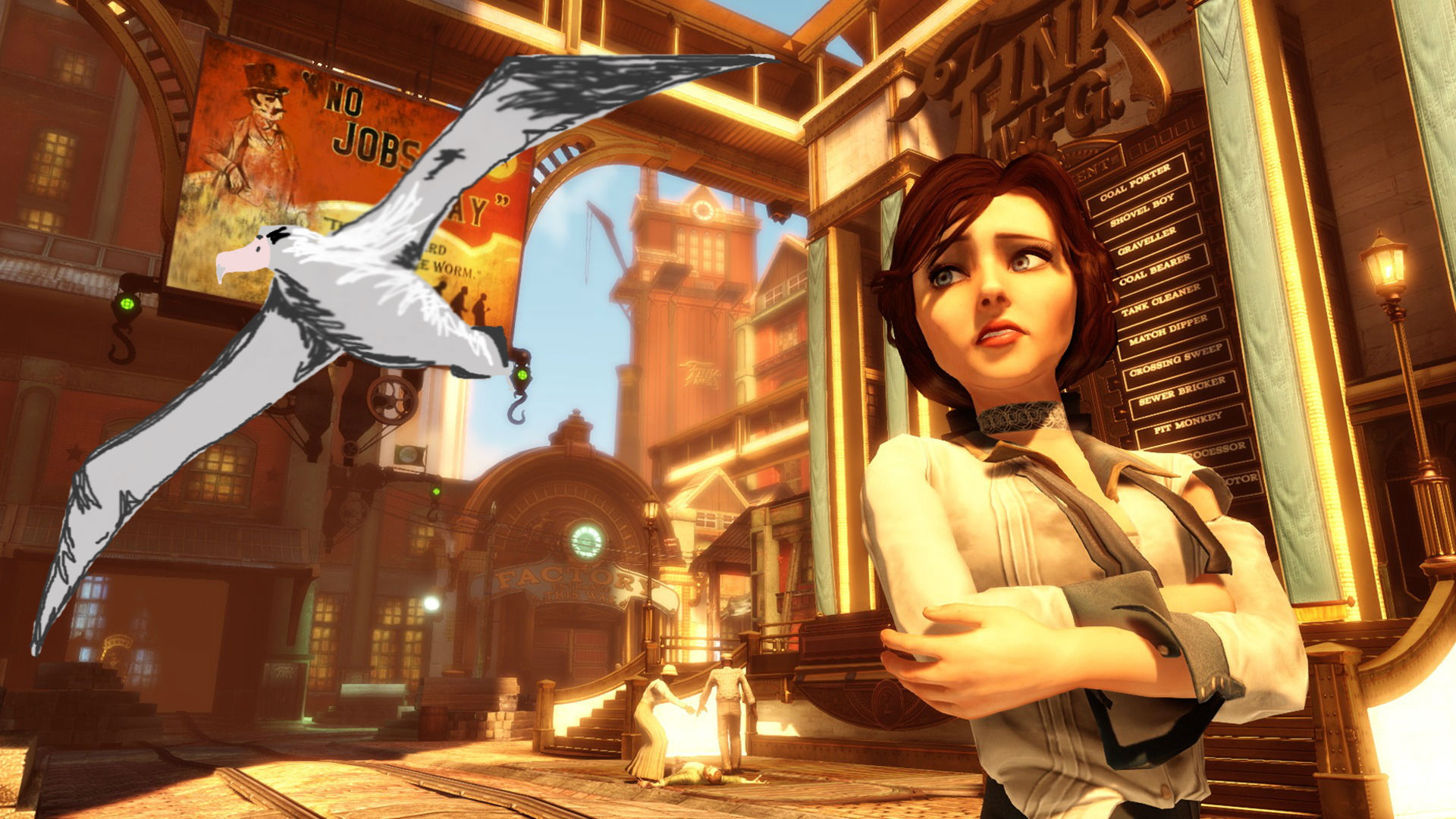 Some types of albatross can weight over eight kilograms, too. That is like someone coating several bottles of wine in feathers and then smashing them into your face at 50 miles an hour (depending on windspeed). Or, say, eight medium sized melons, all at once, right in the kisser. The albatross also has a large, sharp beak with a hooked end, so it basically has an edged weapon that the feds can’t make it put down.

Finally, let us also consider the psychological aspects of albatross-based combat. The albatross already looks like you have spilled its pint, and that its singular purpose in life is to destroy you in retribution. It has a naturally livid countenance, and a startling presence that only an eight-kilo, 11-foot-wide bird can really bring to the table. There is a reason Coleridge went off on one about them. Is the goose included in possibly the worst poem ever to ascend to the list of literary canon? Does a soul need to be washed clean for slaying a pigeon? It wasn’t “the hen about my neck was hung”, was it? No, it bloody was not.

I suggest one, single albatross for a reason, too. And not just because it would be a big ask for a computer to render an entire flock of hundreds of the feathery bastards. No: because one is, objectively, the most terrifying number. Granted, a flock will do the job quicker, but it’d be like being hit by a truck made of pillows. You’d never know what had happened. A single albatross allows the enemy to really appreciate the nature of their impending death.

But alas, nothing good comes without a price. And as such, the boon of DNA-enabled bird-launching must also take its dark toll on the mind. Want to know what that is? Just you sit there, and imagine the total horror of ejaculating a seabird the width of a king-size sofa out of your wrist. Imagine the horror of someone doing that at you.

In conclusion: vote albatross. You know it makes sense.