The Star War is the only thing I have been playing outside of work for weeks now. I am becoming intimately familiar with its workings: the push and pull combat, and also of the Force Push and Force Pull powers. It is a brilliant game that I love, but that I also find full of contradictions. Here are my five best and worst things about Star Wars Jedi: Fallen Order. The twist is that each thing is both a best AND a worst! Haha!

1. If you turn on subtitles, everyone is subtitled very accurately 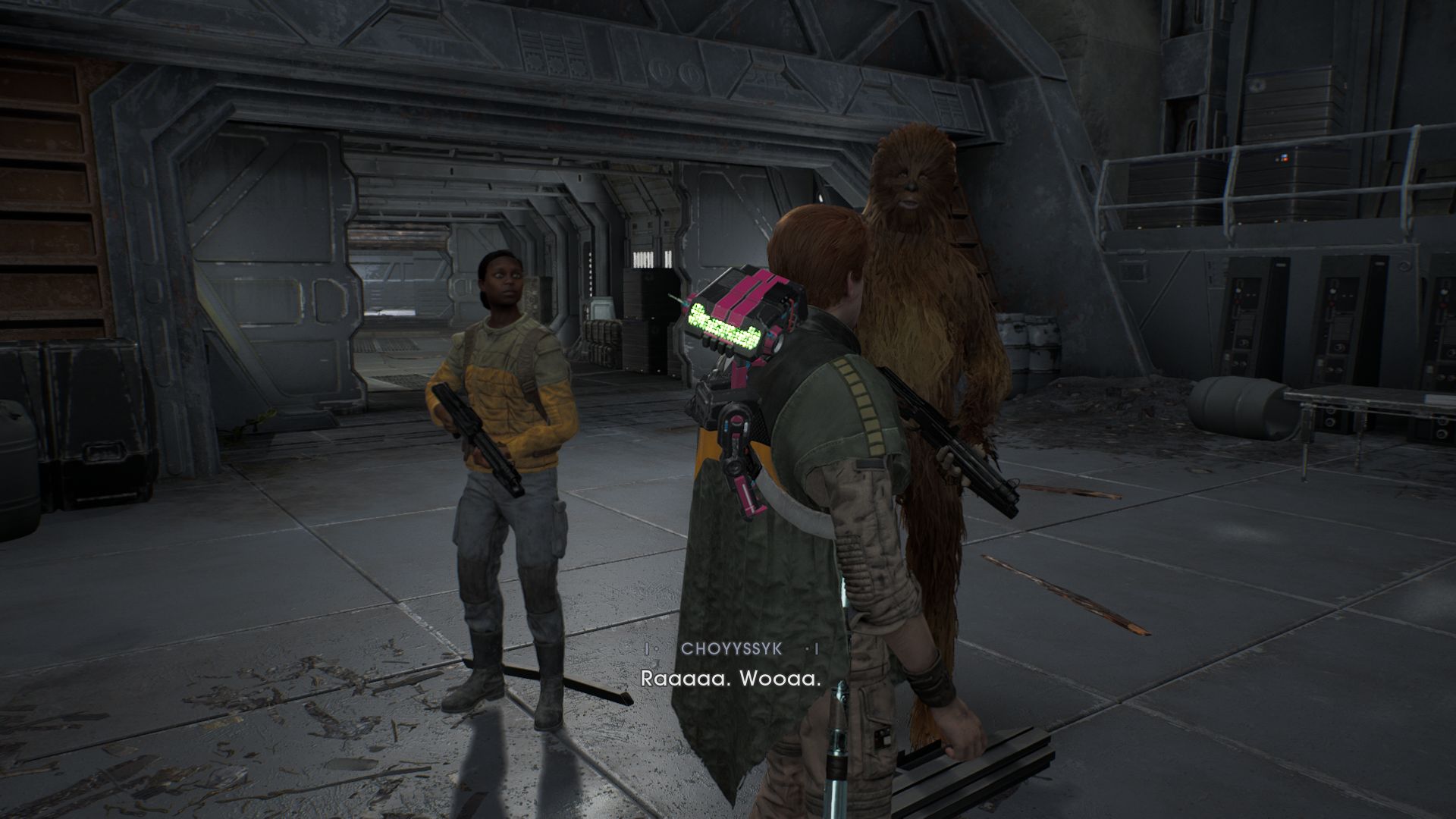 I play games with subtitles on all the time, because I want to know if I’m going to enjoy a line of dialogue before the actor has even started to deliver it, ho ho. But also because I don’t want to miss any incidental dialogue that might otherwise be obscured by a the bursting of a fantasy pig monster, or what have you, in the background.

Doing this in Fallen Order, however, reveals that someone, somewhere, properly went in on the subtitles. Every trill made by your tiny robit friend becomes a Dwop-bwoop or a Be do doo!; every strained roar from the game’s cast of wookies (who, unfortunately, look much more like scaffolding draped in seaweed, than the bears on stilts they should resemble) is a Woooah!.

The good: It reminds me how little effort usually goes into making games accessible, even in basic ways. BD-1’s little excited, curious or sad bleeps are lovely – and how much lovelier are they for the fact they can be enjoyed by anyone?

The bad: It reminds me how we still have a lot to do to understand best practise with these things. Because of the peculiar nature of the sounds that actually get made in a Star Wars game, I realise that to a deaf or hearing impaired person, without any appropriate context, there may be little difference between these two captions:

This is probably why some subtitles, e.g. this one from Pokémon, do it a bit differently: 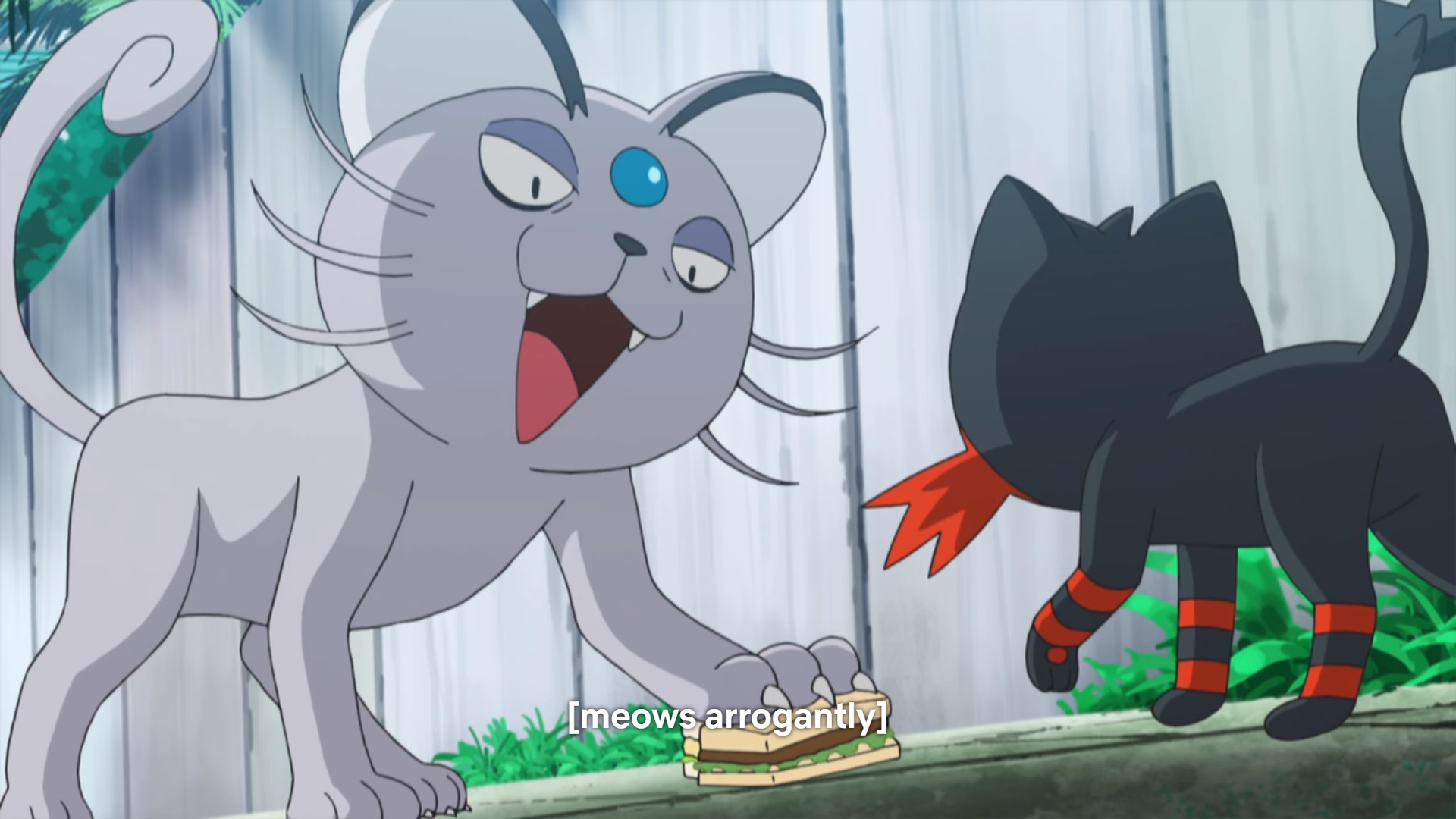 2. The hero of this game wears a poncho 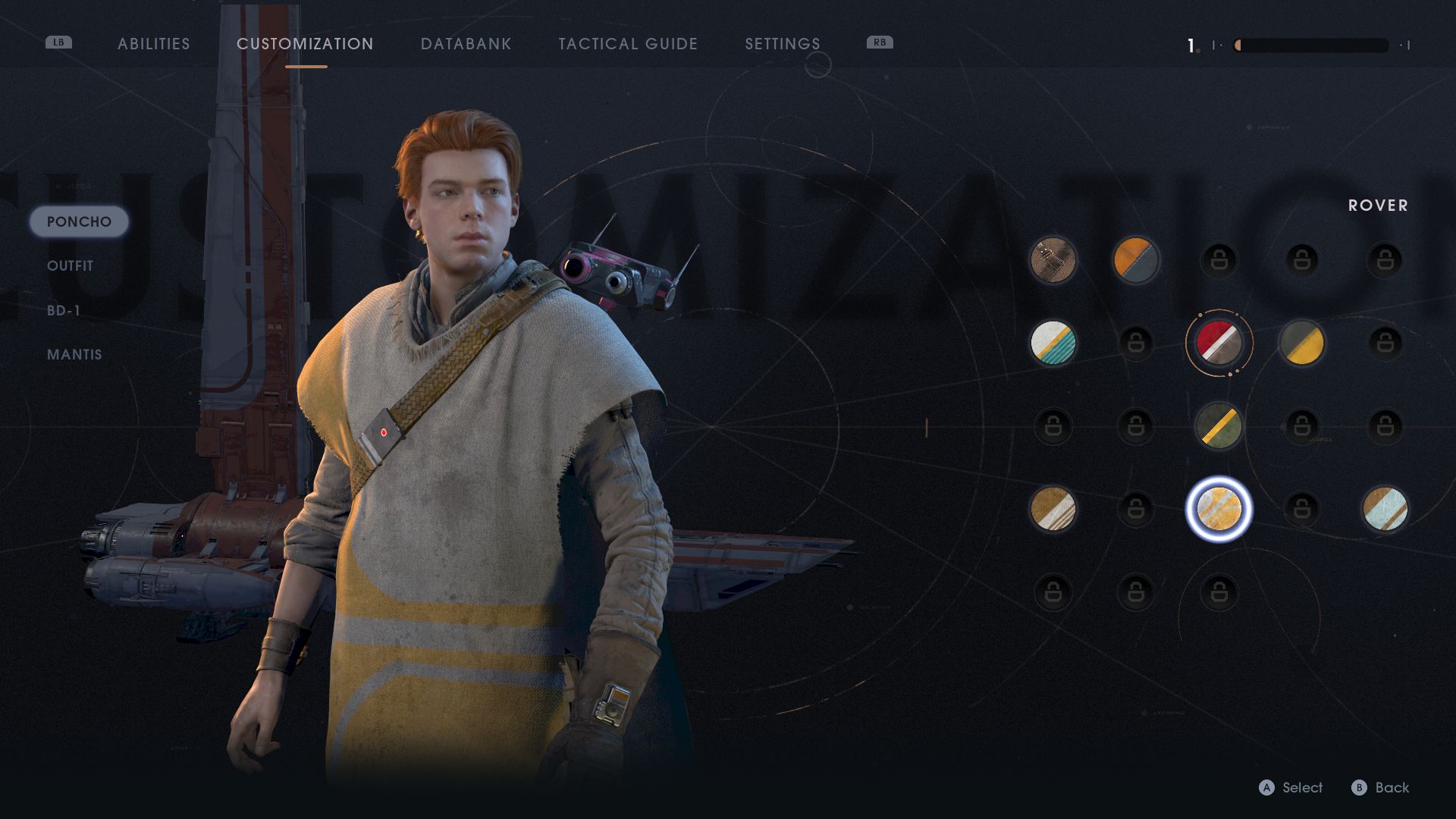 There are more customisation options in Fallen Order than I was expecting. There aren’t any guns or the like to loot, so the slightly off-the-beaten-track supply crates you find are instead stuffed with different fashion options – which, in a lore sense, does raise questions about the priorities of Stormtroopers. You can change all the bits on your overclocked bug zapper stick, including an unnecessary number of metal options like “Bronzium” (it is a bit bronzy). You can also choose to give BD-1 a black-and-dayglo-pink paint job, which is an option I should absolutely never have been offered.

The main option for jedi’s jedi Cal, though, is his poncho. You can get different, named ponchos (called things like ‘Free Kashyyyk’), and all of these allow you to change their colour, their material, and even sometimes their cut.

The good: The poncho isn’t the coolest option for tactical clothing – unless you’re birdwatching for Bill Oddie, who I presume has been living free and wild in the treetops since leaving Springwatch a decade ago. But it makes sense! You have a full range of movement for doing cool space magic tricks, but also get to stay dry in the rain. Also it is very funny whenever the collectible pop-up comes up on screen saying NEW PONCHO.

The bad: Sorry, the only person in Star Wars allowed to rock the combat poncho is Carrie Fisher, and you keep her name out of your mouth. 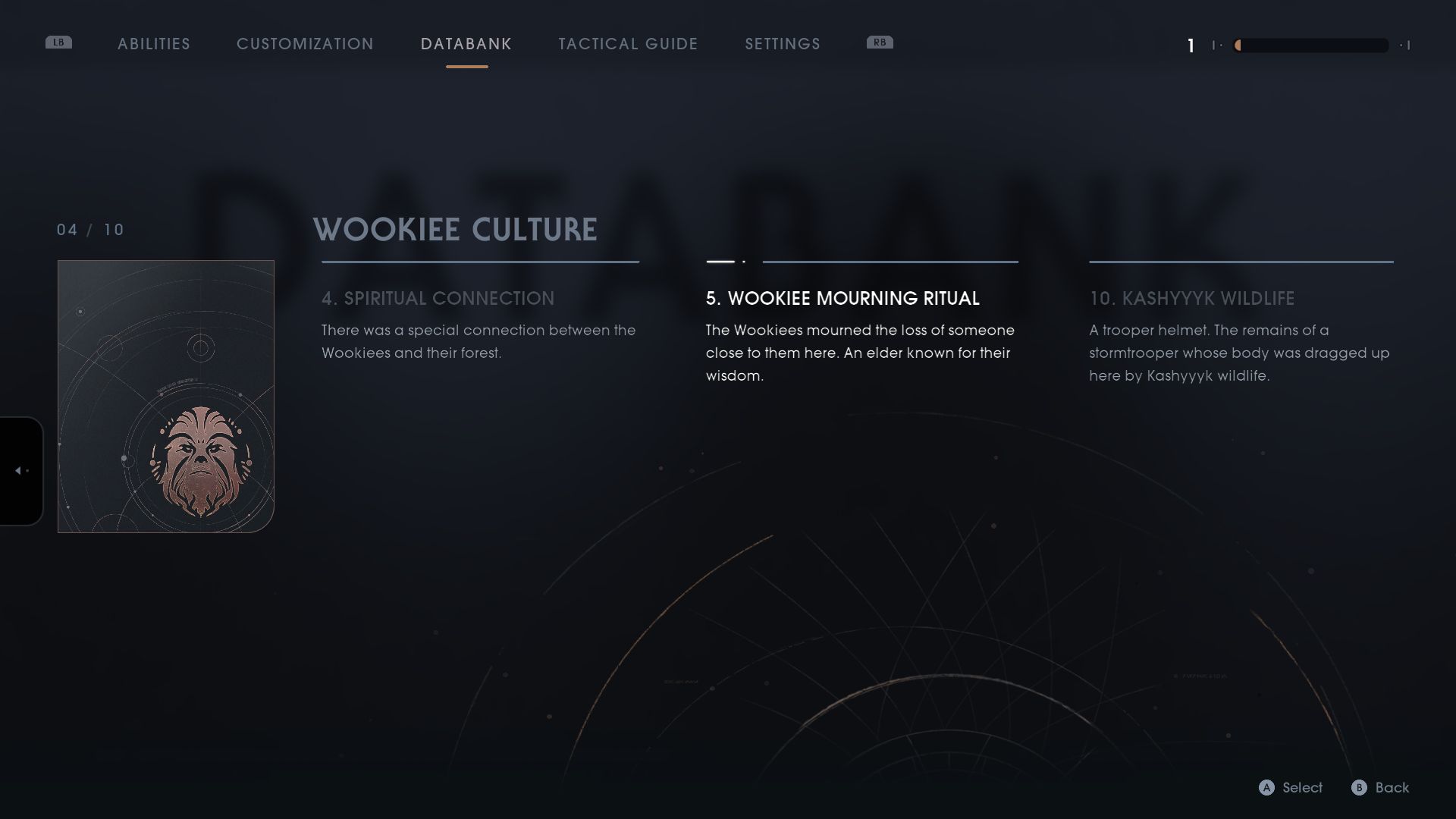 Cal has this apparently super rare ability to read echoes left by the Force, where something particularly emotional or spiritually significant has happened. It’s sort of like mega-empathy, where coming across some torn rags will allow Cal to sense that they were used to wrap a sad baby, to the point where he can even hear the baby crying. As a game feature, it replaces lost diary entries or other environmental storytelling techniques.

The good: Force echoes are marked with a little blue glow, and I’ve often found myself exploring more of the environment because I can see one off in the distance. They’re a good little breadcrumb for my curiosity. I also like that they take about 5 seconds to pick up, and if I want to learn more I can read a little bit in the menu after. I don’t have to read an entire diary entry, or spend the next three minutes listening to a sad man say he is sad, in a voice memo he recorded explicitly for the purpose of saying out loud that he was sad.

The bad: Some of them are painfully, painfully bland and obvious. In some cases you could easily replace “can sense Force echoes” with “can read context clues” or “has common sense”, to be honest. “A Stomtrooper died here,” says Cal, having mystically sensed this from bits of smashed Stormtrooper armour lying in the mud. At other times, they are hilarious oversimplifications. The collection of data that Cal gathers on “Wookie Culture” would, one imagine, have a Wookie looking into the camera like Tim off of The Office. 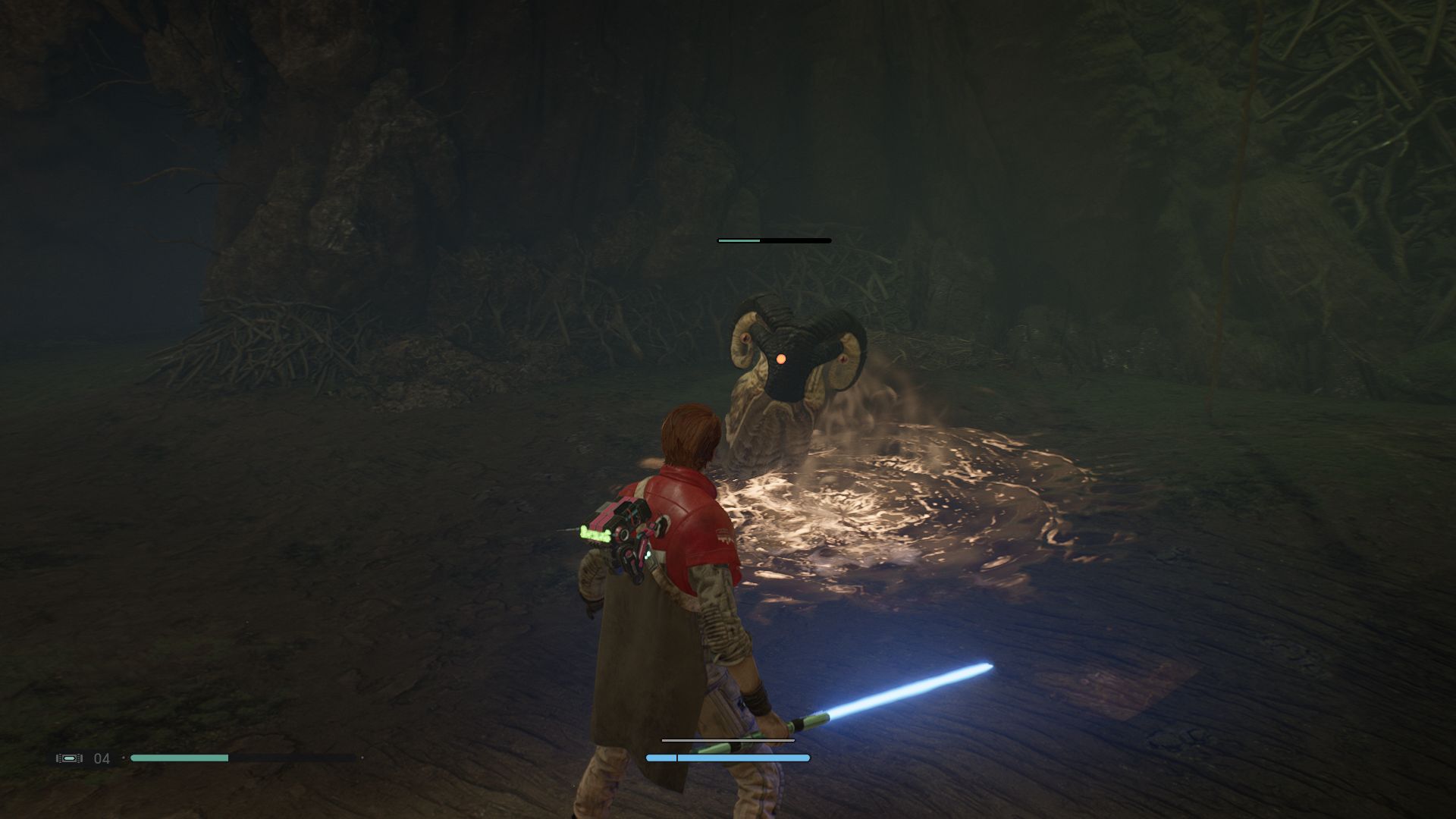 Basically, all the enemies are different variations on a range of basic models. Humanoids are stunny stick men, laser shooting men, etc. Animals also come in different flavours of the same, murderous ice cream base – but they’re more fun. You’ve got your elemental exploding bug bastard, the bastard that can tunnel, the bastard that can charge at you, and of course the big bastard that hits very hard.

The good: The local flora and fauna do make sense – like, you can imagine how they evolved. You can imagine David Attenborough doing a bit about them. Check out this thing pictured above, a giant slug with ram’s horns that does sicks everywhere. It lives on Kashyyyk. Its little eyes are actually on the ends of its horns. It is… to be fair, very similar to a giant goat, but on another planet. I love it. You can just picture the Big Man himself (Sir David Attenborough) describing the contests between males, where they slam heads together repeatedly, and then blop up an intricate pattern on the floor to impress females. The canonical name for it is a Slyyyg. Fuck off. 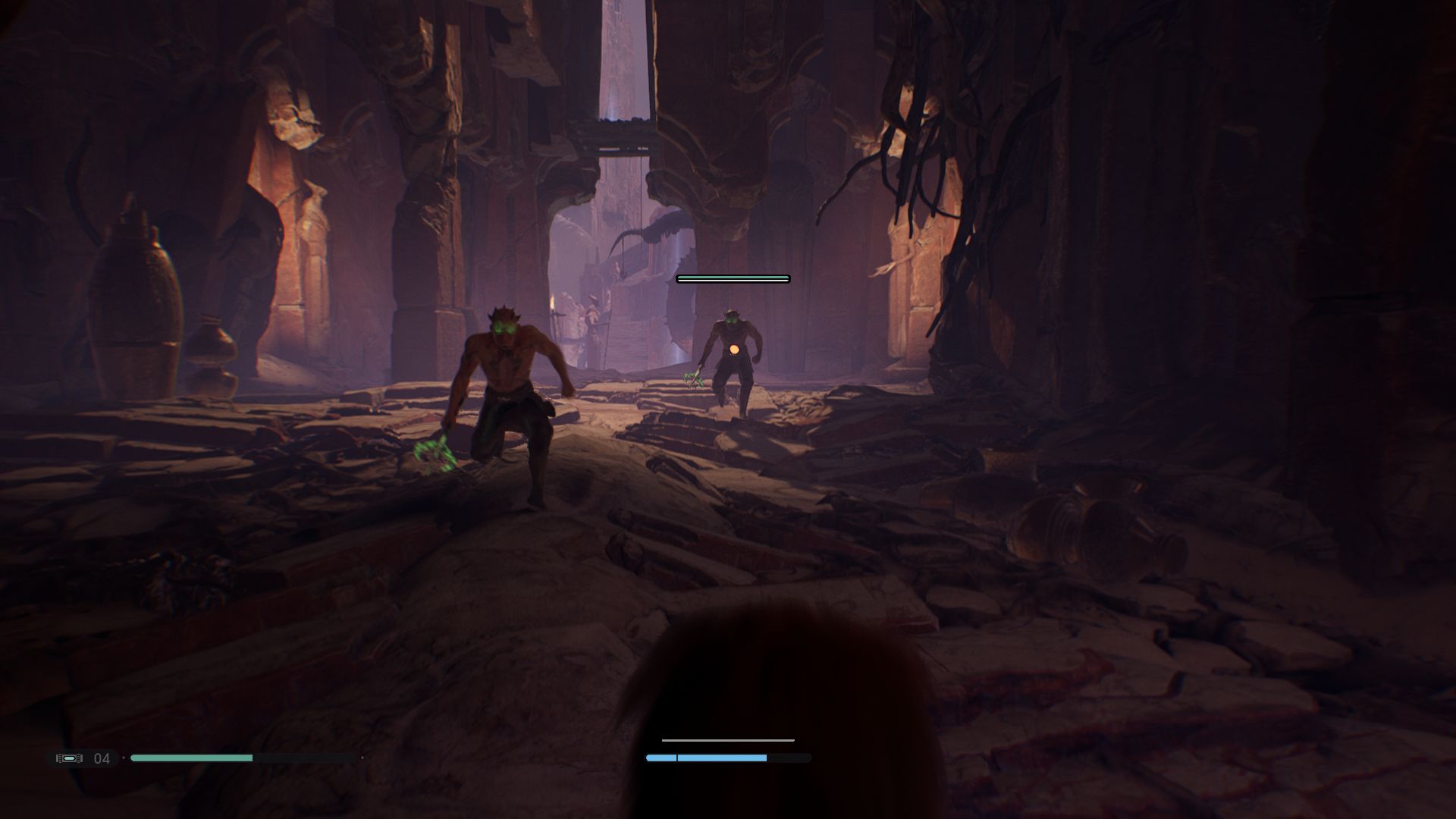 These men are just Stormtroopers without armour. Cop on, lads. Where are your giant horns with eye stalks? Where’s your acid sick?

5. Enemies do their combat barks at other enemies 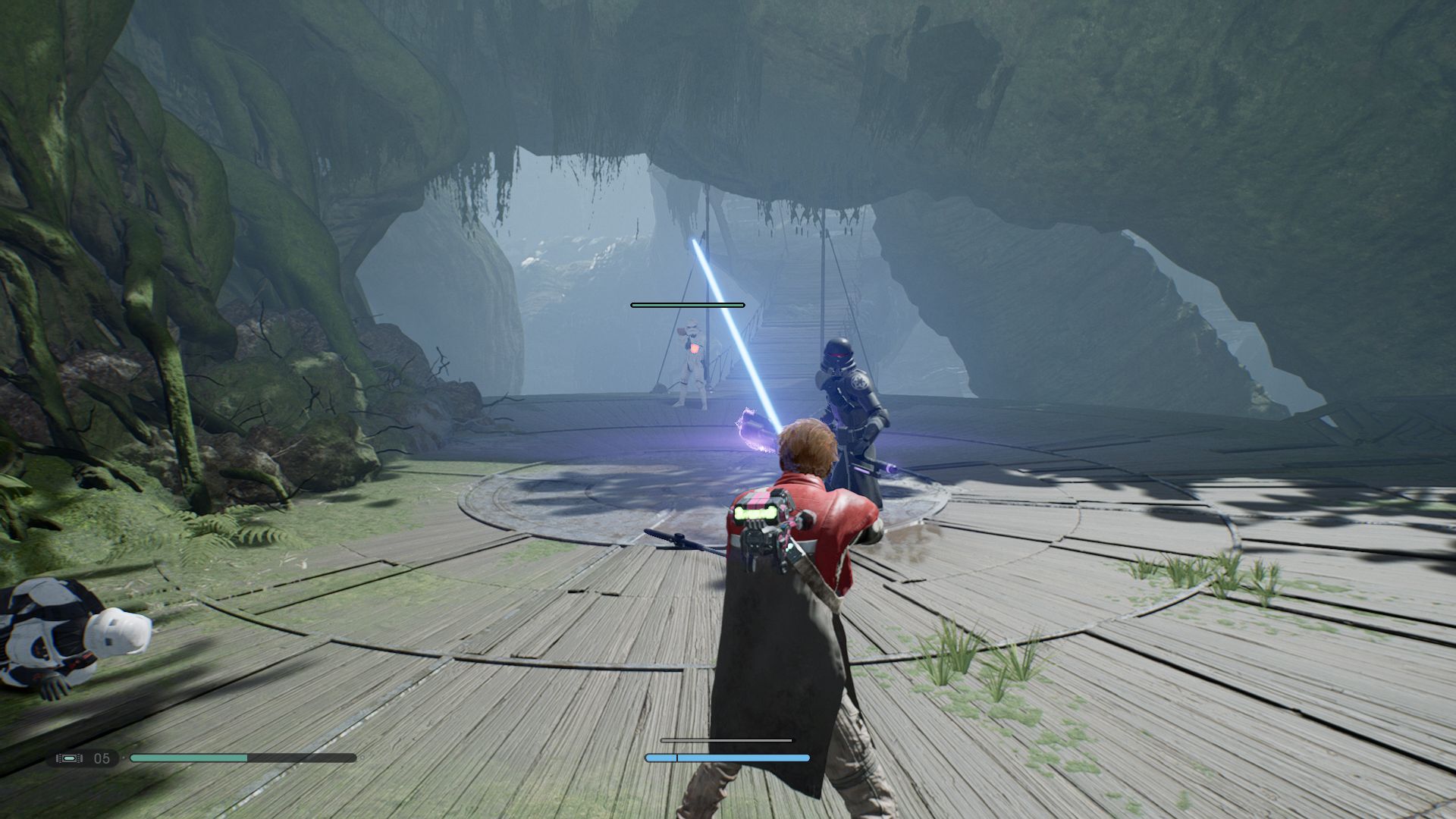 The worlds in Fallen Order are being aggressively colonised by the Empire (or “Imps”, as rebel fighters call them, a nickname that always takes my brain several seconds to catch up with). This means that the local monsters are as likely to attack the space fascists as they are to attack you. More likely, in fact, if you stand back a bit.

The good: One time I watched a Purge Trooper, the goth Stormtroopers specially drilled to fight jedi, running around yelling “Bleed for me!” at some big rats.

The bad: Most of the time the combat barks are not as funny as “Bleed for me!”. When a Stormtrooper shouts “It’s just you and me!” at a spider because the spider ate all his mates, I just feel sorry for him, and I don’t want to feel sorry for the faceless clones I am mowing down.