The most fun reviews to write are the ones where you either have loads of good things to say about a game, or loads of bad things. Anywhere in between, and you have to start introducing nuance – and who has the time or inclination for nuance in this workaday world? Not me. So let’s review Detroit: Become Human!

Part adventure game, part sweeping morality play, Detroit is the latest David Cage/Quantic Dream masterpiece, and arrived on the Epic Games Store last week. It’s about doing the washing up with movement controls, and/or whether robots can have feelings. I played it through on PS4 when it came to Sony boxes last year, but now, after several hours road testing the PC version, I’m ready to say wot I think. 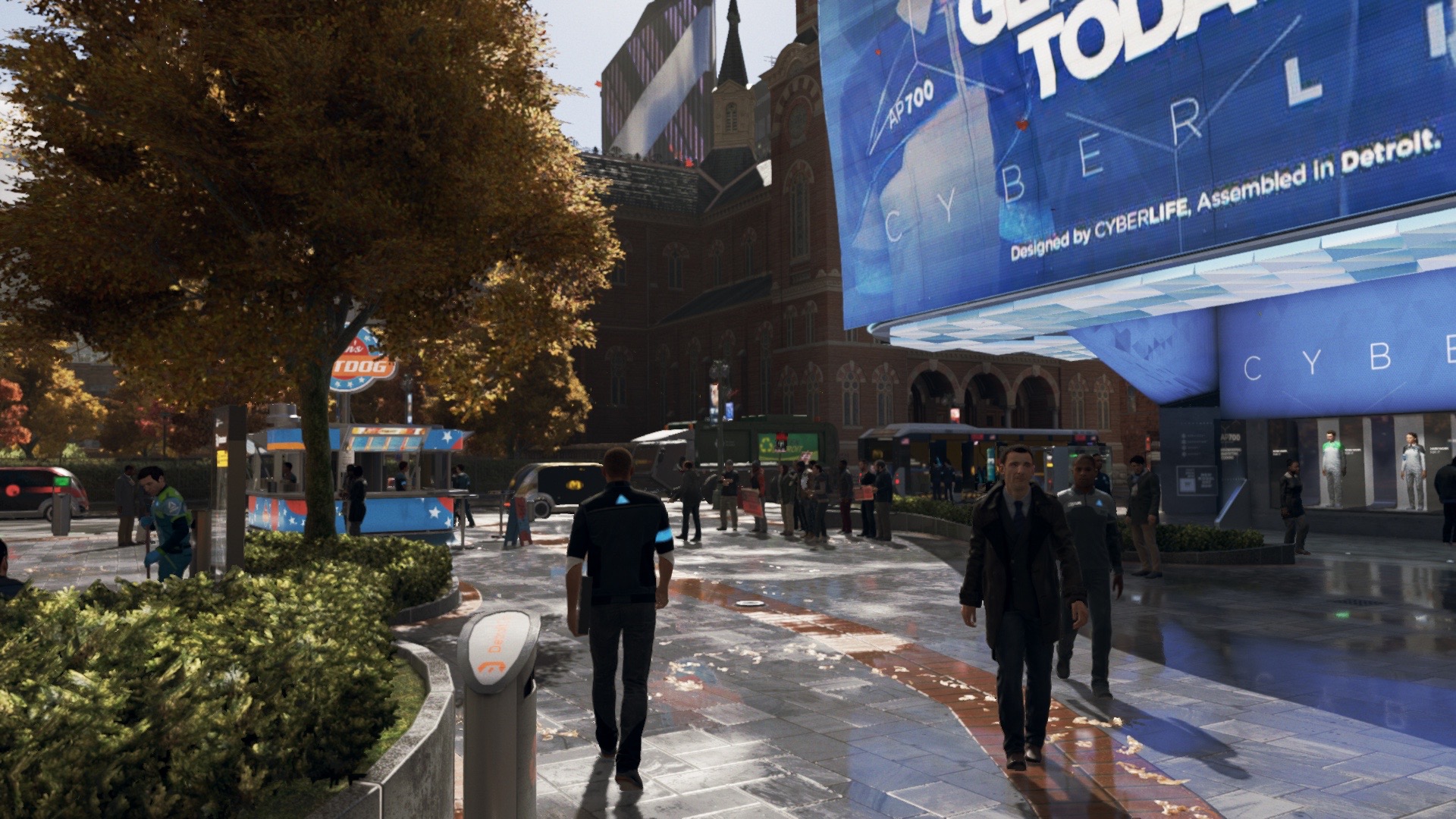 The year is 2038. We are in Motor City. Tensions are high; unemployment is mass. People now use Androids for everything, with different models available for every conceivable need (nannying! Accompanying you on a jog!), despite the fact that a single model could clearly be programmed to do any of these tasks. Perhaps it’s because even a second hand ‘droid costs two grand a throw. You play as three different sad robots, whose sadness varies according to the high jinks and scrapes they find themselves in. At first, said high jinks run parallel, but begin occasionally to cross over one another.

The controls are an adaptation of those designed specifically for PlayStations Sixaxis joypads. Mash a button in a QTE, hold down several all at once, and push the analogue sticks in a certain direction, and voila: you have performed an action. Sometimes that might be starting a fire, sometimes it’s running across rooftops in a chase sequence. And you know what? I like them way more on PC. Fumbling with an ‘up and a quarter turn left’ on an analogue stick has been replaced with swiping your mouse. It all felt a lot easier and more natural to me, and I never even thought about plugging in a controller. I M+K’d my way around near-future Detroit very happily. 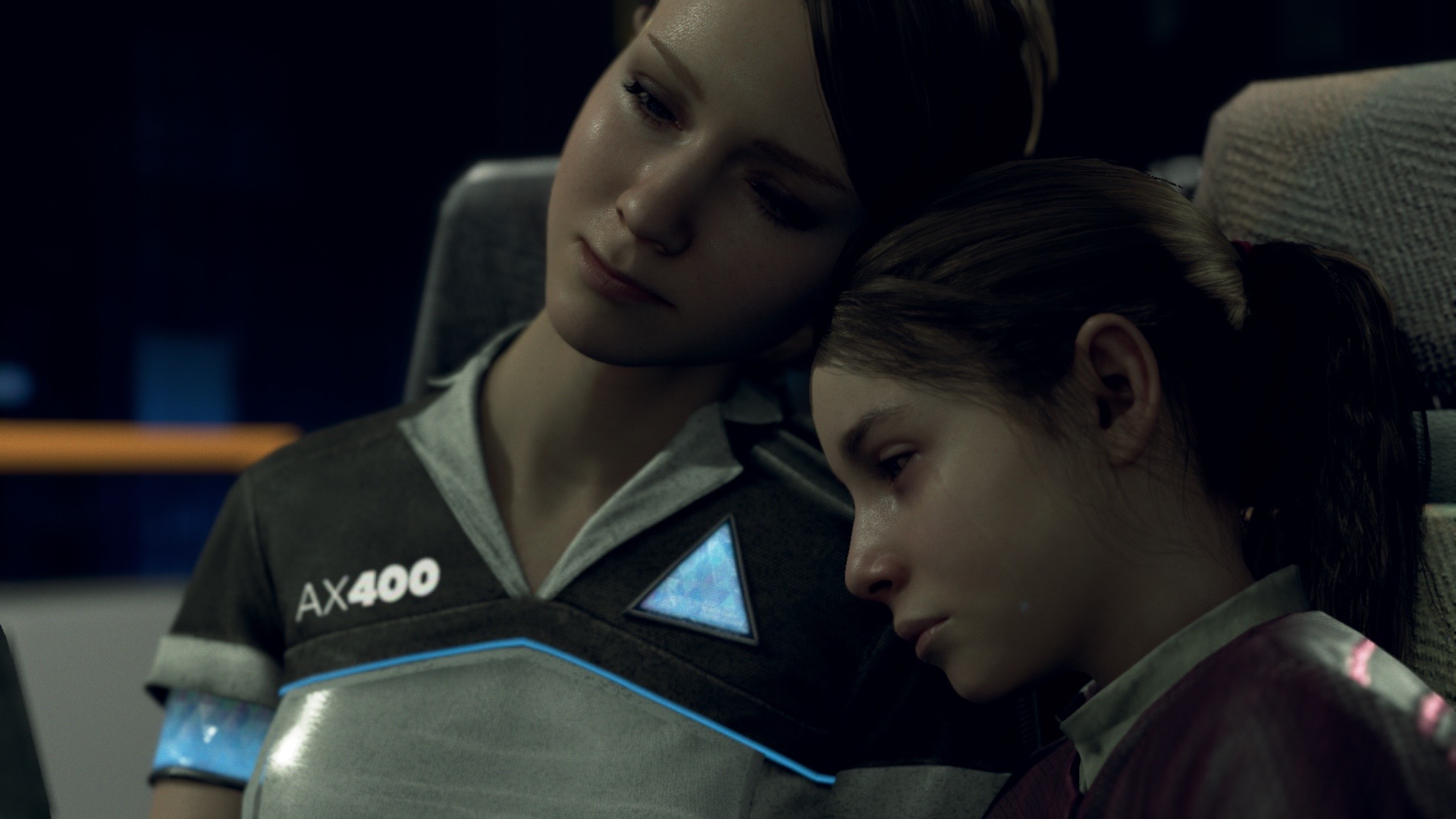 Because it is the near future, there are lots of lights shining everywhere, the better to show off Detroit’s chief plus point: it is a very good looking game. It was a 52 gig download, so it ought to be, really (it’s almost as good looking as the androids themselves, in fact – I caught myself thinking that maybe bad feeling about androids would be lessened if CyberLife manufactured some of them to be dowdy uggos rather than universally perky and fuckable actor-slash-model types.) The rain, which QD are no doubt experts in at this point, glistens on the wet concrete. There is lens flare. In close ups, you can see every fake pore on an android’s face.

Our three favourite androids are all different models with different jobs. Kara is a housekeeper for Todd Williams and his young daughter. Their home is one of depressing and cartoonish domestic abuse; Kara, it is implied, is routinely broken and repaired by Todd, who also beats his daughter. Kara breaks programming to go on the run with said daughter, and the fact she is called Alice only made the entire game more ridiculous for me. Connor is an adorable robocop who analyses fluids at crime scenes… by licking them. His job is to hunt down androids who have “gone rogue”, like Kara has, which is happening more and more often. Connor is a good boy. Then there is Markus, who is robot Jesus. He is accused of killing his kindly artist master, is shot and thrown in a scrapheap, and then literally comes back from the dead to lead the androids in revolution against their unfair treatment. The denouement is basically an attempt to answer the question: do androids deserve full rights and personhood? 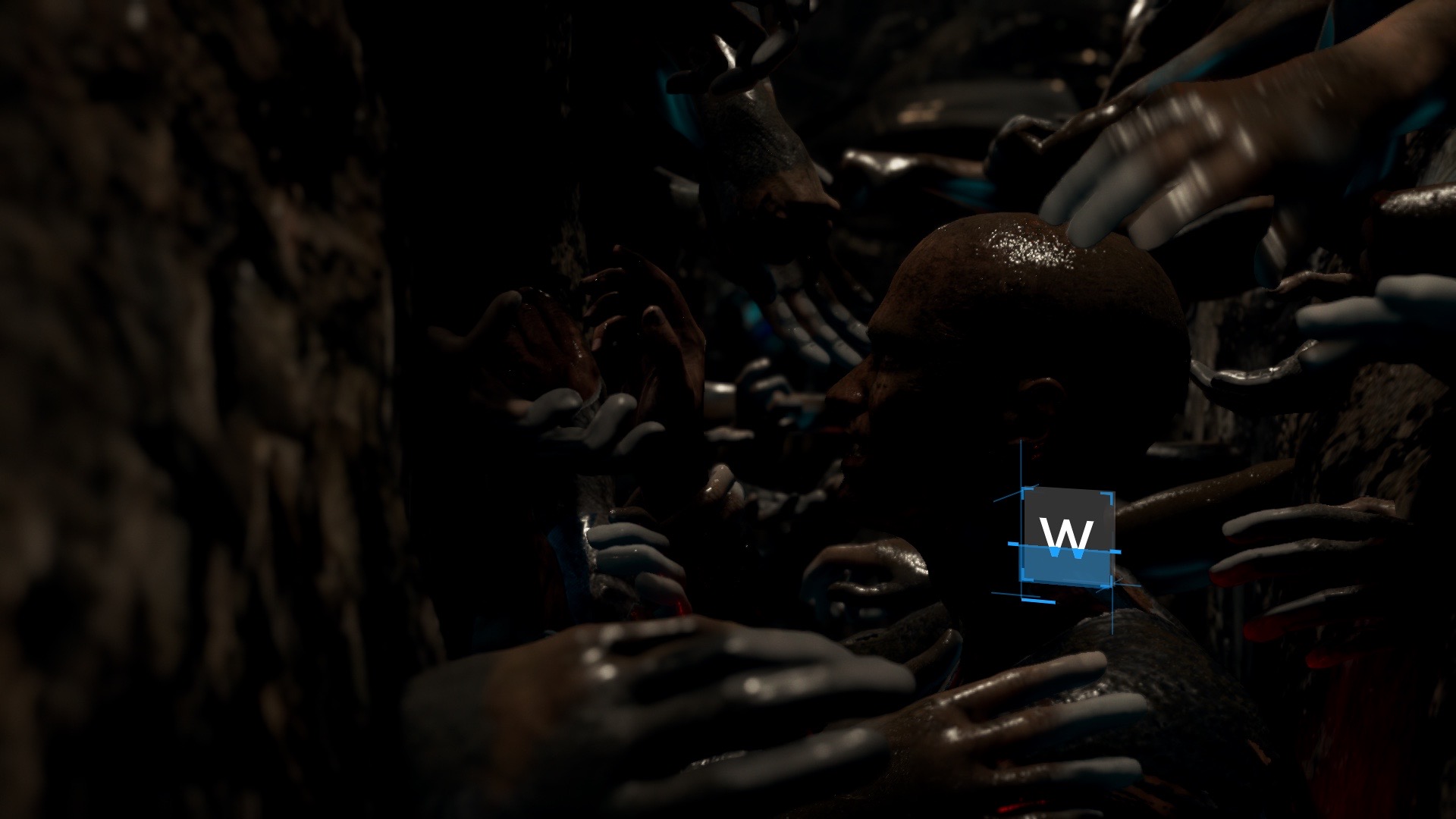 In searching for the answer, you will, variously, find yourself on the run from the feds, being the feds, hiding in a farmhouse, doing a really weird bit where you track a rogue android through a strip club, and transmitting the rogue virus to other androids via Bluetooth in a particularly hilarious scene featuring a protest march. The protagonists are all played excellently by Valorie Curry, Bryan Dechart and Jesse Williams respectively. In fact, all the cast – including the fabulous Clancy Brown as Connor’s embittered police partner – put in excellent performances. My admiration for their work is only increased by the absolute dross they were handed to work with.

Look, I’m not having a go at anyone for enjoying playing Detroit. I enjoyed playing Detroit, and I like Quantic Dream games. Quantic Dream are really good at making games, in so far as their game systems are always very fun. And the way in which Detroit delivers its story to you keeps you wanting to keep playing. I especially liked being Connor, and analysing crime scenes with my mouth – a concept which has surely already been commissioned for a season and a half by NBC. There’s a really good bit where you’re interrogating an android suspect and you have to keep him just stressed enough that he’ll confess, but not so stressed that he’ll self-destruct. It’s a really cool, tense little dialogue puzzle. And so, yes: you do want to keep playing, to keep solving the puzzles in different ways, to fill out more of the big mad map of possible actions that you get shown after each chapter. If it had just been a game about being a Ken Doll robocop solving robocrime, everything would have been fine and dandy! 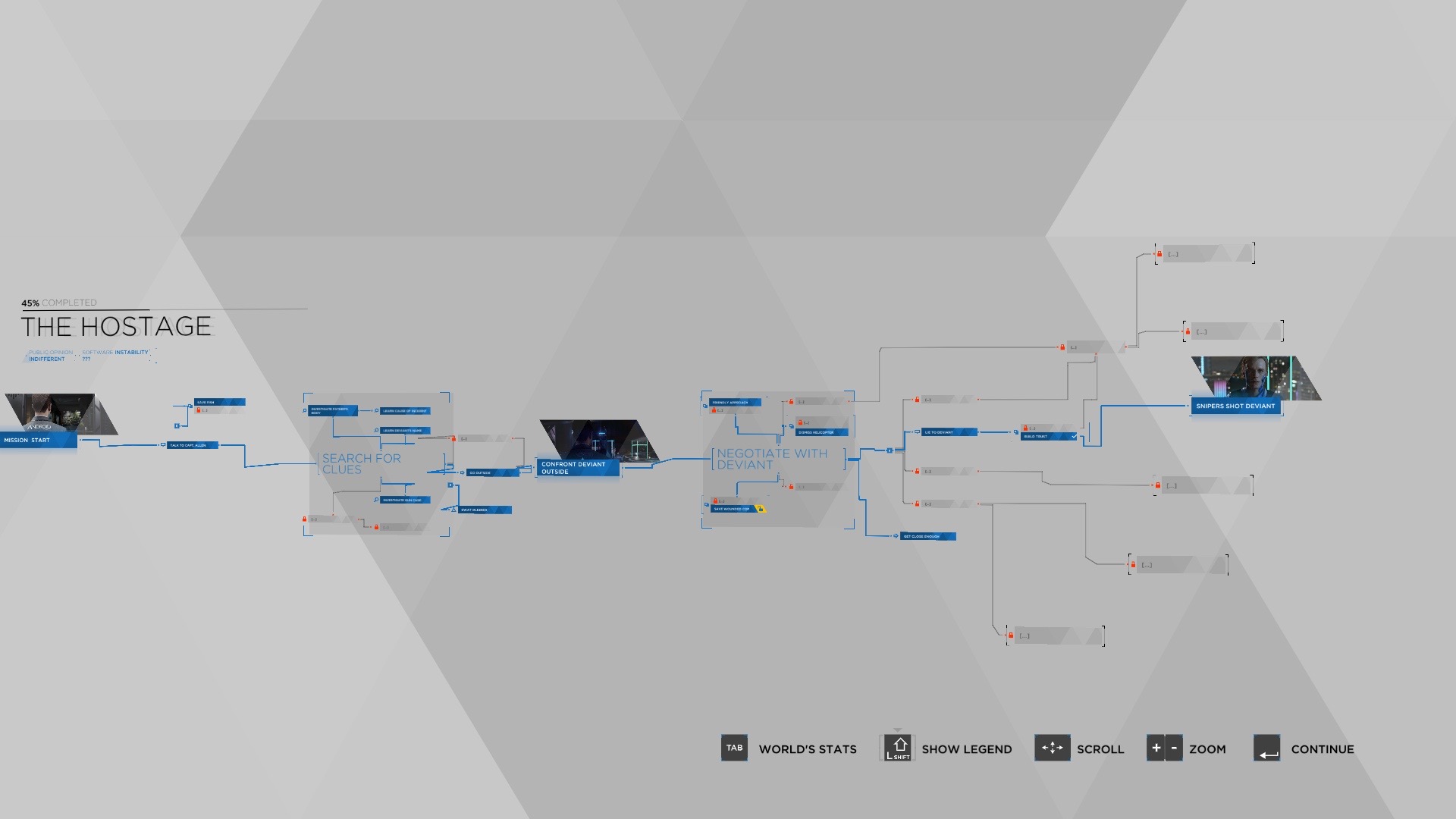 But it’s not that, is it? I suppose Detroit is meant to make you question what it means to be human. It did make me do that, because when, in preparation for this review, I discovered that Detroit has won at least three awards for narrative, I sat and watched a nature documentary and questioned the utility of human beings existing at all. “Look at those chimps, bashing a nut with a rock,” I thought. “They’ve got it worked out.”

Despite the fact that a recurring musical motif is an African-American gospel song, that some androids repeatedly refer to themselves as slaves, and that they have a special compartment to stand in at the back of the bus, David Cage famously informed the world that any parallels we see to real life in Detroit’s story are purely imaginary. “The story I’m telling is really about androids,” said Cage, in an interview with Kotaku. “They’re discovering emotions and wanting to be free. If people want to see parallels with this or that, that’s fine with me. But my story’s about androids who want to be free.”

Given that I, and you, and anyone who might ever play this game, is not a total fucking moron, it’s hard to credit Cage’s assertion. It’s not just that the parallels that Cage claims don’t exist are demonstrably there, it’s that they’re so insultingly facile, and handled with all the delicacy of the average Danny Dyer interview. There’s a secret network of volunteers trying to get androids across the border to Canada. You can give your protest group the slogan “We have a dream.” Are we really all keeping a straight face, here? 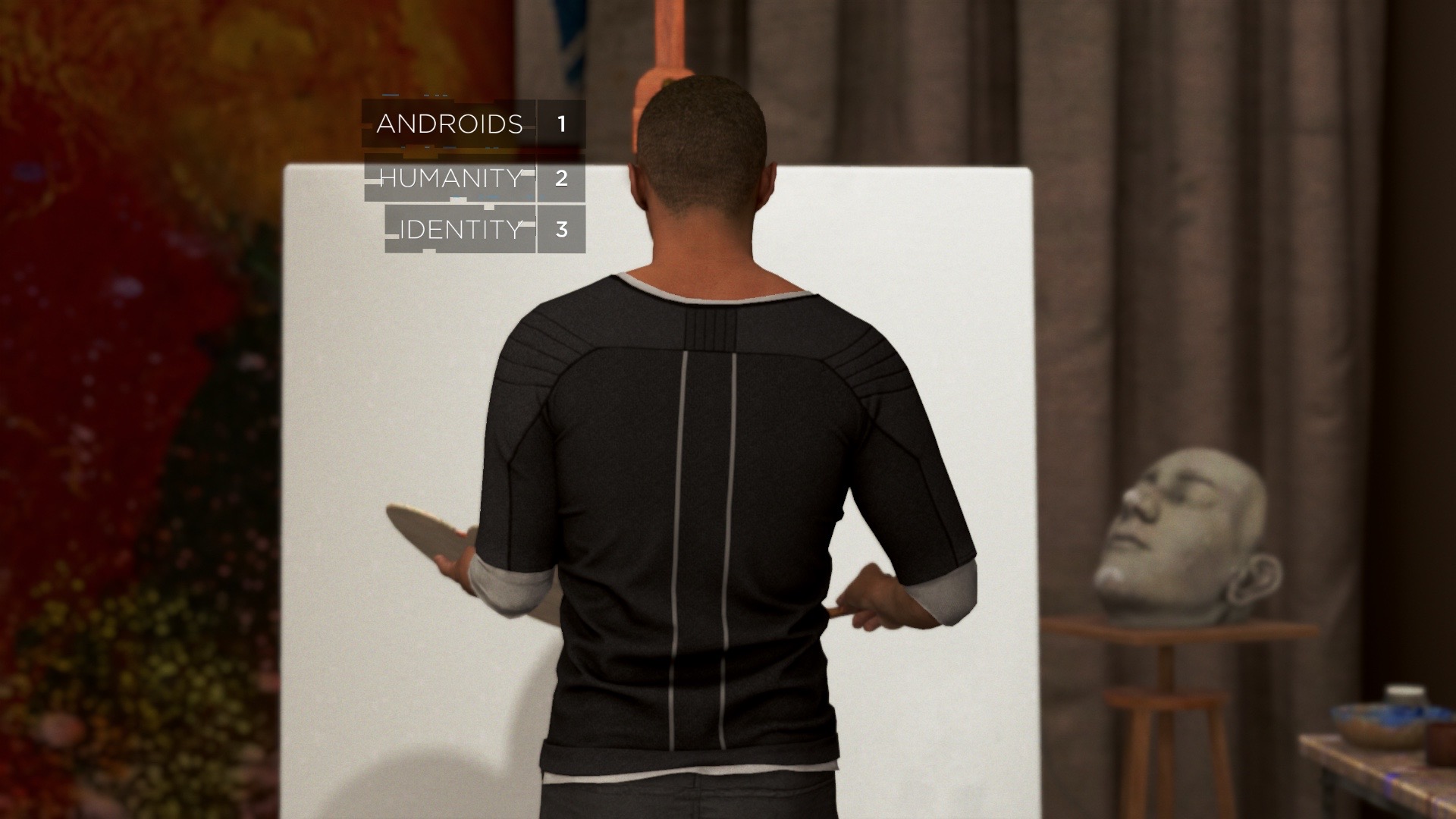 “Don’t you even know dignity when you see it!”

Subtext is an entirely foreign concept to Detroit. Markus dying, crawling through robot hell and coming back to life is just one of many, many, extremely literal moments in the game. In another, an android who has been experimented on by a very obviously evil man, turns to Kara and says “He turns us into monsters – but who is the real monster!?” Who, indeed.

Markus is the worst offender, though. After he’s crawled out of the pit he says “My name is Markus” directly into camera, and then strides off, grabbing a cool leather jacket as he goes. At the start of the game, his owner encourages him to paint something, and you can choose from stuff like FEAR and IDENTITY and HOPE. When (spoiler! But not really, since you can predict almost everything that happens in Detroit roughly ten minutes before it happens) Markus’s owner dies, he cradles him in his arms, weeping and crying “Dad!”. To find a secret hideout for free rogue androids, he must swan-dive, in slow motion, from a crane… a leap of faith, mayhaps?

The lack of grace in the story is only amplified by how beautiful the game itself is. It’s like installing a beautiful, hand-carved, intricately gilded picture frame on one wall of your house, and then using it to frame a canvas with the phrase “BAD THINGS ARE BAD???” smeared on it in non-toxic finger paint. Give one of those touring drama groups that do plays about issues for GCSE students a budget of 15 million quid, and you’d get a production with more subtlety than Detroit. I beg of you, Quantic Dream, contract out your editing. 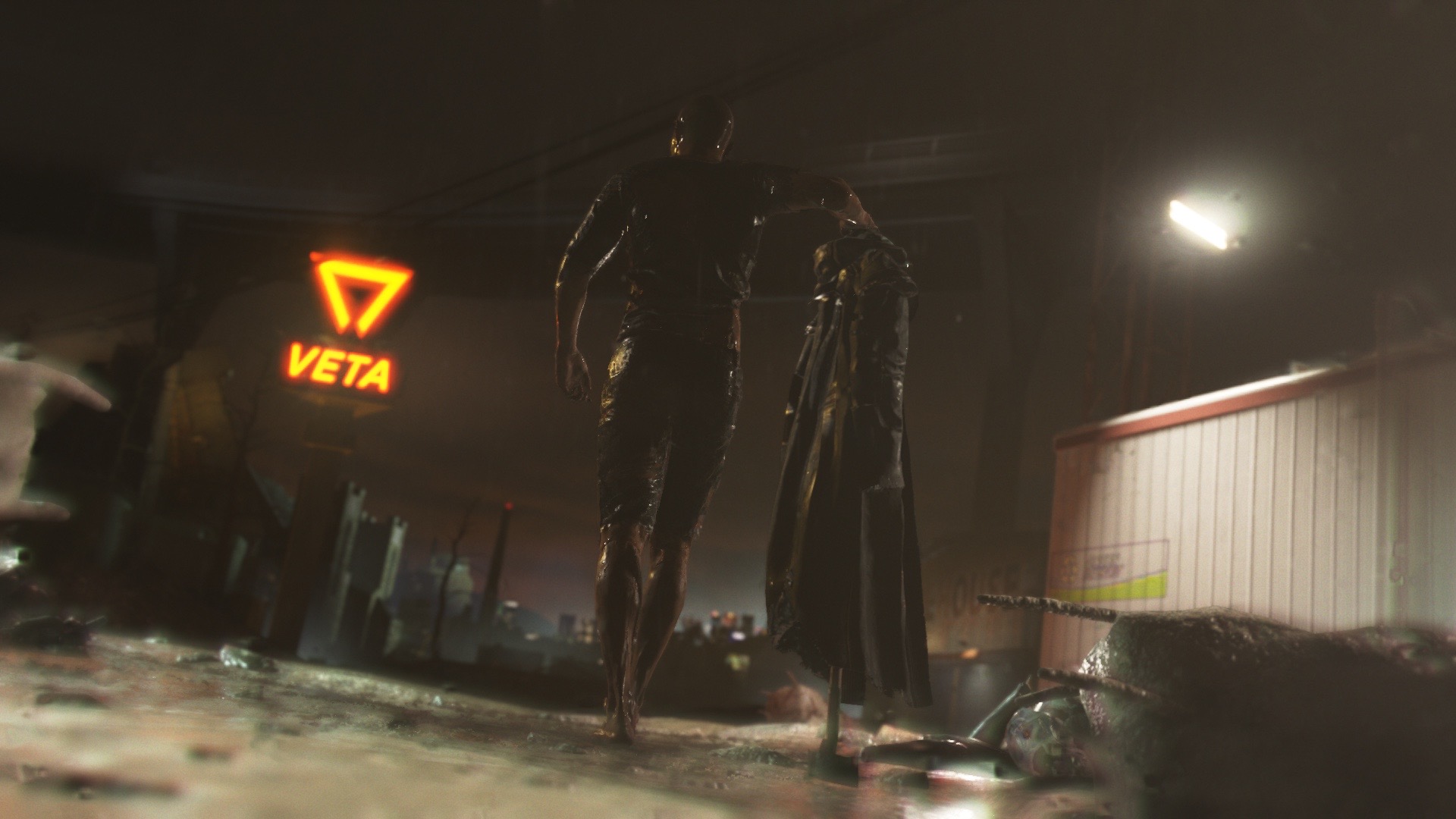 It doesn’t work even if you accept the premise that it’s just about androids, because approximately all of science fiction has done the android-finding-humanity story better than this. Literally the first sci-fi story ever was about a scientist’s creation turning against him in an agony of existential despair. You can replicate the effect of playing Detroit by watching the movie A.I. and listening to a compilation of LBC radio’s wackiest call-in moments at the same time. Imagine one of those joke tweets that starts “I gave an AI nothing but Friends scripts…” except it goes “I gave an AI nothing but the Blade Runner script and some Dan Brown books…”

Look, I’ve spent a lot of time dunking on the story, but this is a story-heavy game – so whatcha going to do? Because it really is very bad! And it’s all the worse for the fact it takes itself so incredibly seriously. It wants you to treat it seriously too, despite all evidence pointing to it not deserving it. In the end, you can’t help but laugh at it. Detroit is a perfect game to livestream, or play with three mates and half a bottle of tequila – but if you tell me you genuinely think the story is well done, I will immediately be sus that you, yourself, are an android poorly trying to replicate human behaviour.