Razer opened a brand-new hardware store in London over the weekend, making it the first dedicated Razer shop in the whole of Europe. Over 2000 snakey PC peripheral enthusiasts gathered for the grand opening on Charing Cross Road on Saturday, but I managed to sneak in on Friday to get an early tour of the place before all the hordes arrived. Spoiler alert: there’s quite a lot of RGB lighting involved, but not nearly as much as you might think. Intrigued? Come inside and see what it’s all about.

Despite being their biggest store to date according to Razer, the shop itself is still a lot smaller than I was expecting. As you go through the main doors, you’re immediately presented with Razer’s so-called ‘hero’ products – their best mice and their best headsets (including their kitty-eared Kraken headset, presumably to tempt the girls in a bit further) illuminated in huge black and white plinths. You can’t stand staring for very long, though, as you’ve effectively got to pick one of two narrow pathways: the headset route to your left, or the mouse and keyboard wall over on the right.

There’s just about enough room for two (and at best three) people to move past each other on either side, but it’s still a bit of a tight squeeze, especially if backpacks and unwieldy shopping bags are involved as well. A cavernous Apple store, this is not. 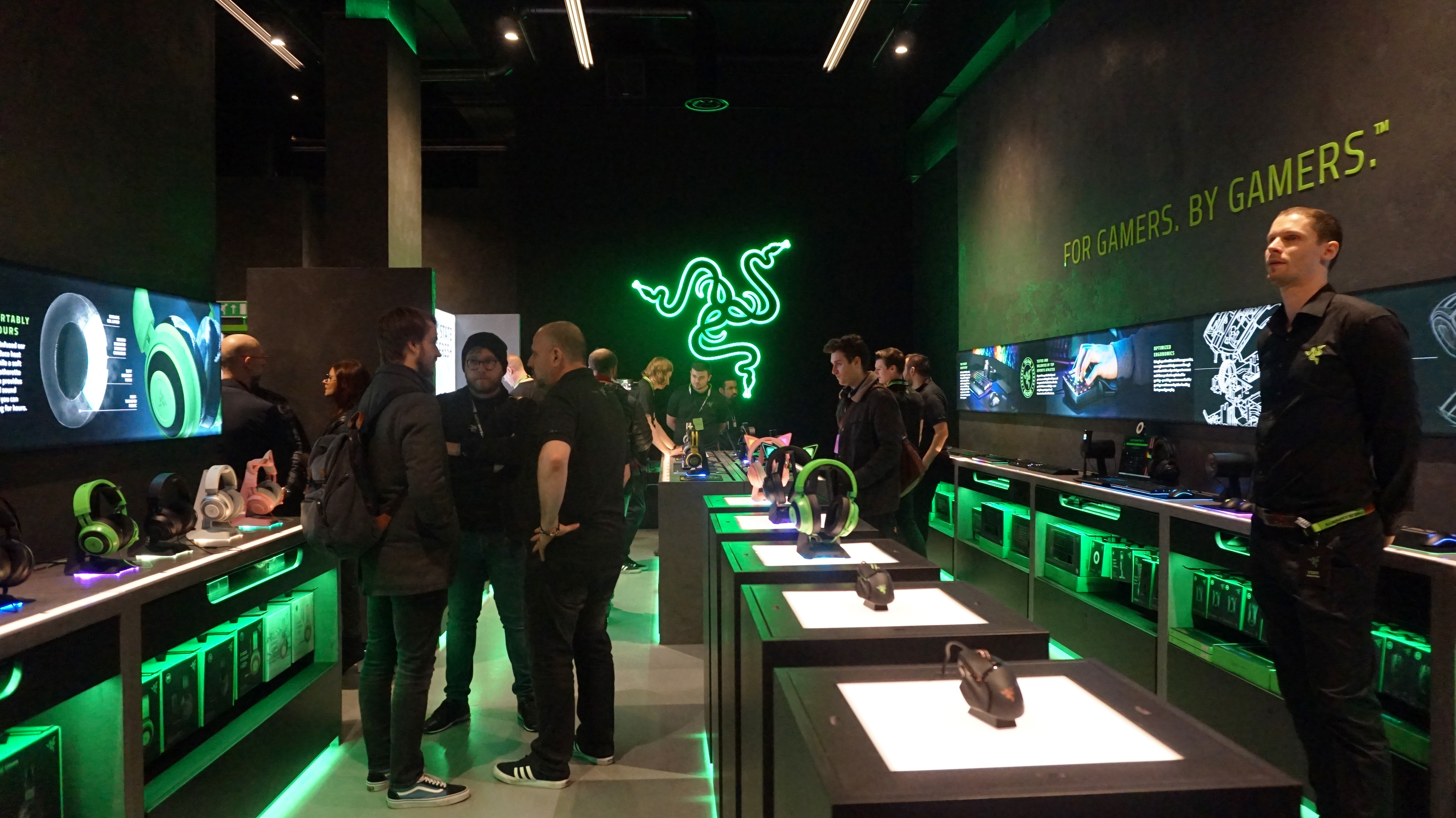 Still, the overall vibe of Razer’s London store is very much the same. Everything is out and ready to be prodded by eager fingers, while all the boxed peripherals you’ll actually buy are housed below in glowing green cabinets. I must admit, I was a little sad to see such a lack of Razer’s RGB Chroma lighting here, but at least the green is still in keeping with their three-headed snake logo – which also dominates the back wall straight in front of you.

Prices and product names are all clearly laid out in bright, white light strips next to their respective peripheral, and everything you see in the store can be bought and paid for – including Razer’s plentiful supply of Blade laptops. These are kept off to the far left of the store (hang a sharp left when you come in and you’ll find yourself in the second half of the upstairs section), with specs, prices and all the different models once again on full display in easy to understand desktop wallpapers. 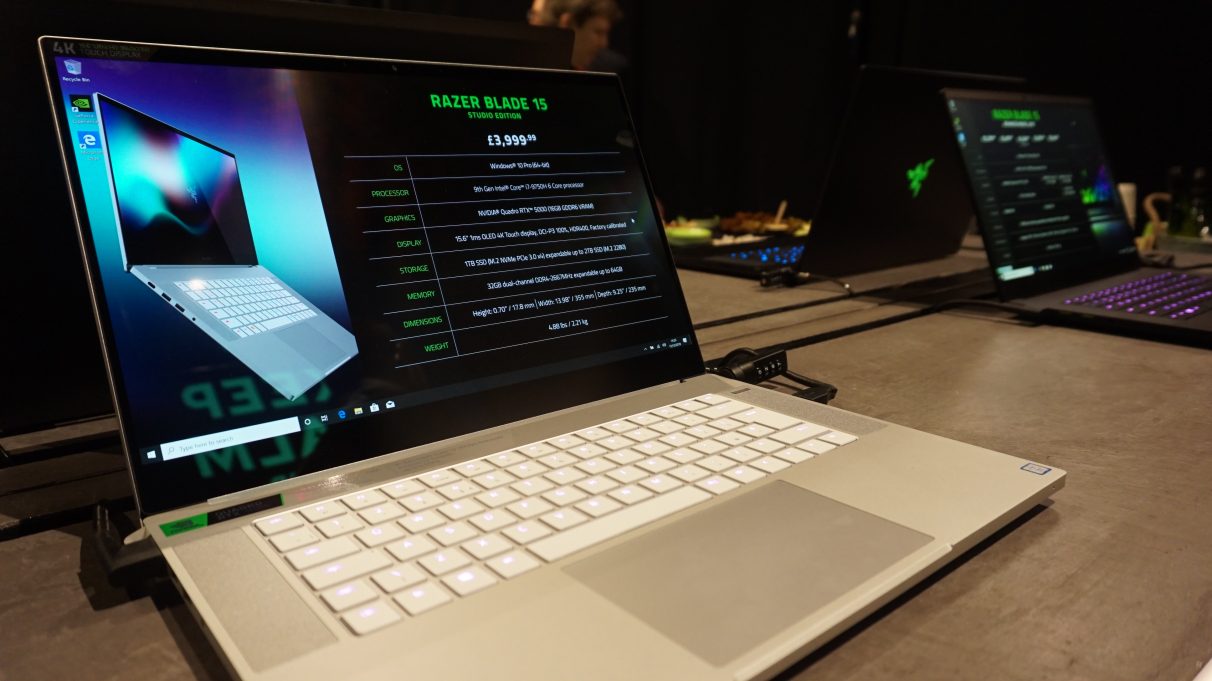 Each laptop’s specs are displayed on the wallpaper. 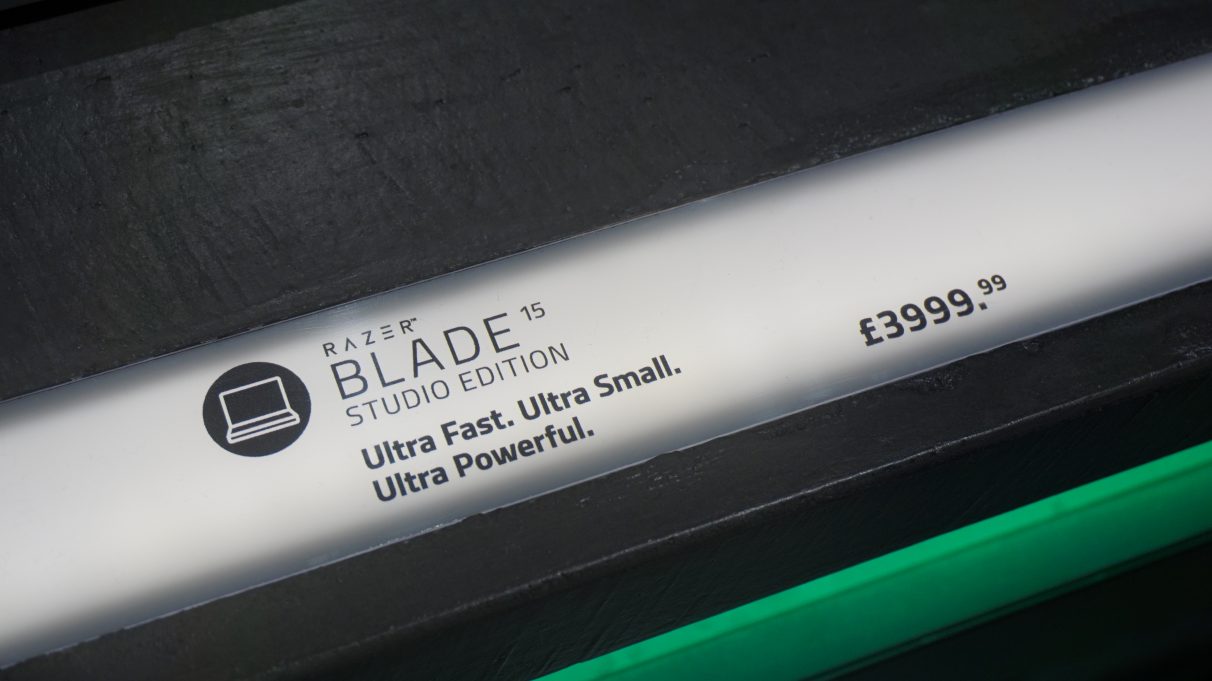 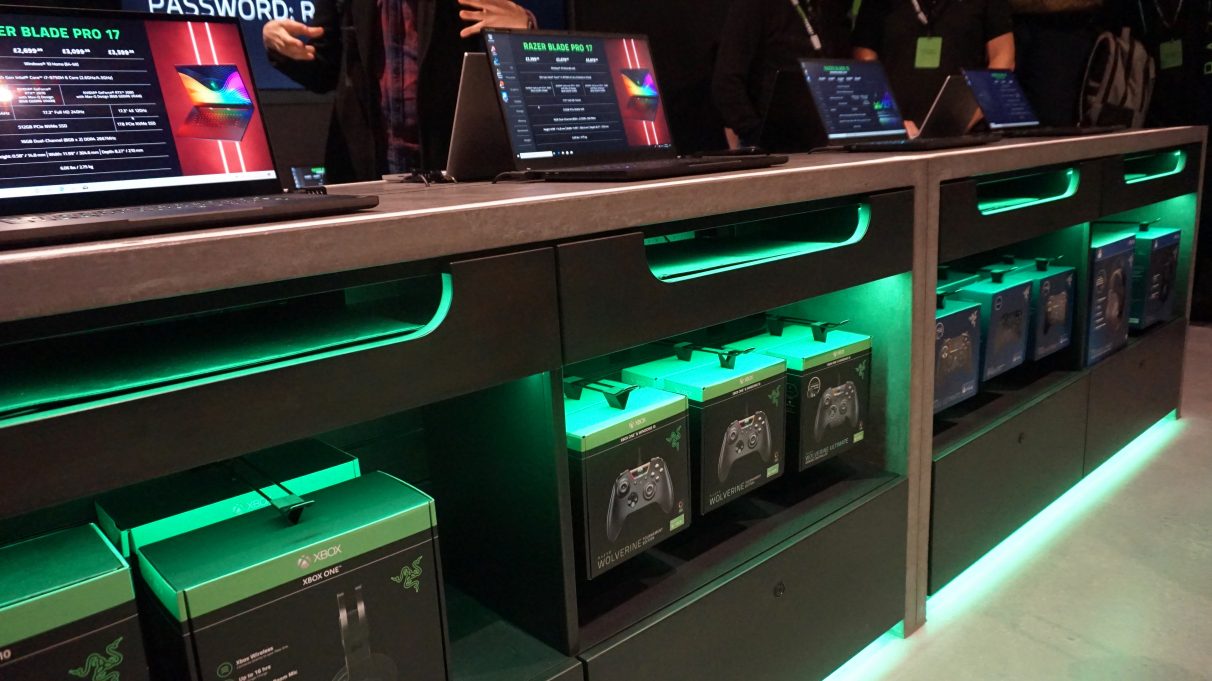 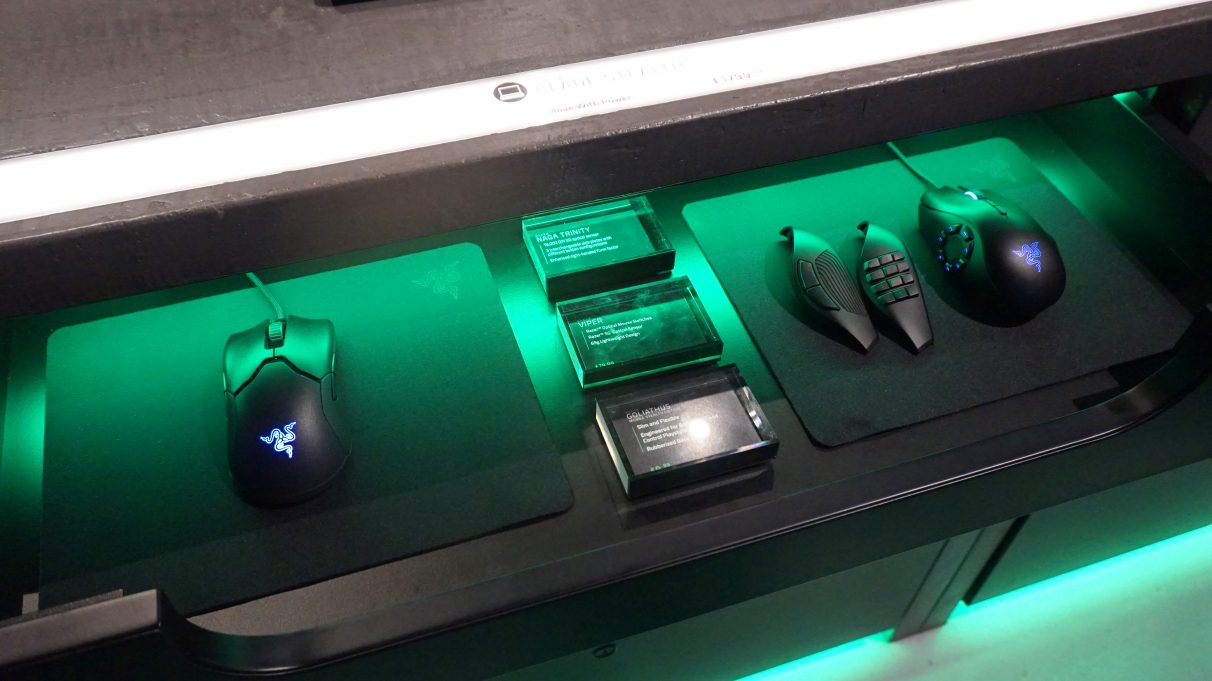 Want to try a mouse with a laptop? Open the secret mouse drawer!


Unsurprisingly, you won’t be able to just pick up a laptop box from underneath their respective demo tables here (instead you’ll just find Razer’s various console controllers), but you will be able to walk out of the shop with any laptop you please by going up to the till. I was mildly surprised by this, as I was fully expecting that you’d only be able to place an order for one online, which would then be delivered to your home.

Still, if you want a bit more time with your laptop of choice, perhaps to see exactly what it’s made of when it comes its overall gaming performance, for example, you can book one of the demo benches behind the main laptop stand. You can also find mice, headsets and more attached to these laptop stations, letting you try out even more Razer goodies at the same time. 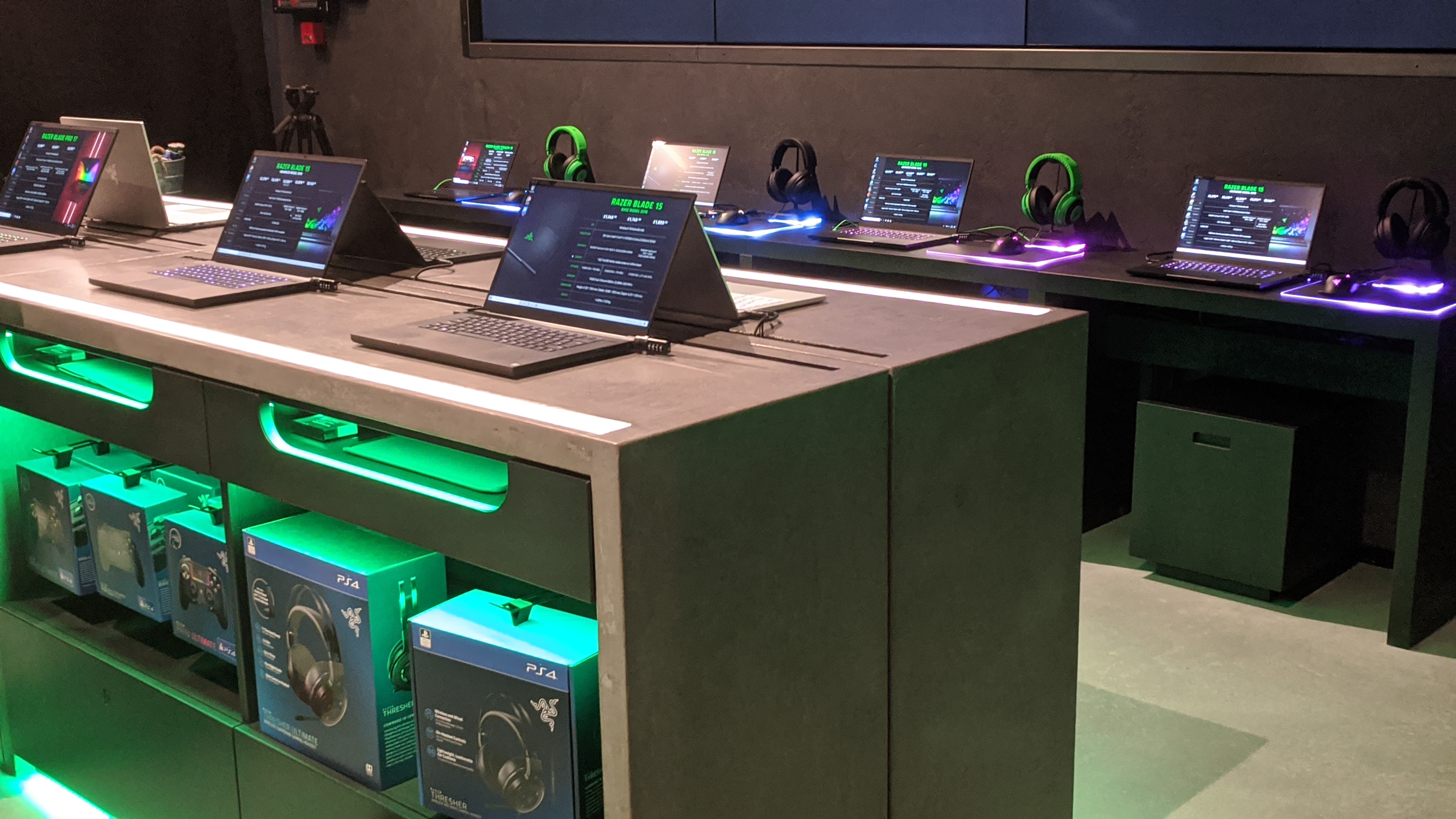 Beyond the laptop station, you’ll also find racks of Razer apparel, including a very fetching ‘Team Razer’ jacket, as well as bags, rucksacks, caps, jumpers and all manner of peripheral accessories. There’s also a stepped seating area beneath the looming green Razer logo on the back wall with plugs and USB ports built into them so you can sit down with your mates and have a break from all the excitement of having 503 different types of mouse and keyboard thrust in your face.

Or maybe you’ll use the benches to get a better view of Razer’s various licensed peripherals, including their Star Wars, Gears of War and Overwatch-themed bits and bobs, complete with all of their accompanying streaming gear attached to them as well. Or perhaps you’ll take the opportunity to gaze longingly at their carefully laid out suites of pink and white (sorry, Quartz and Mercury) peripherals instead. 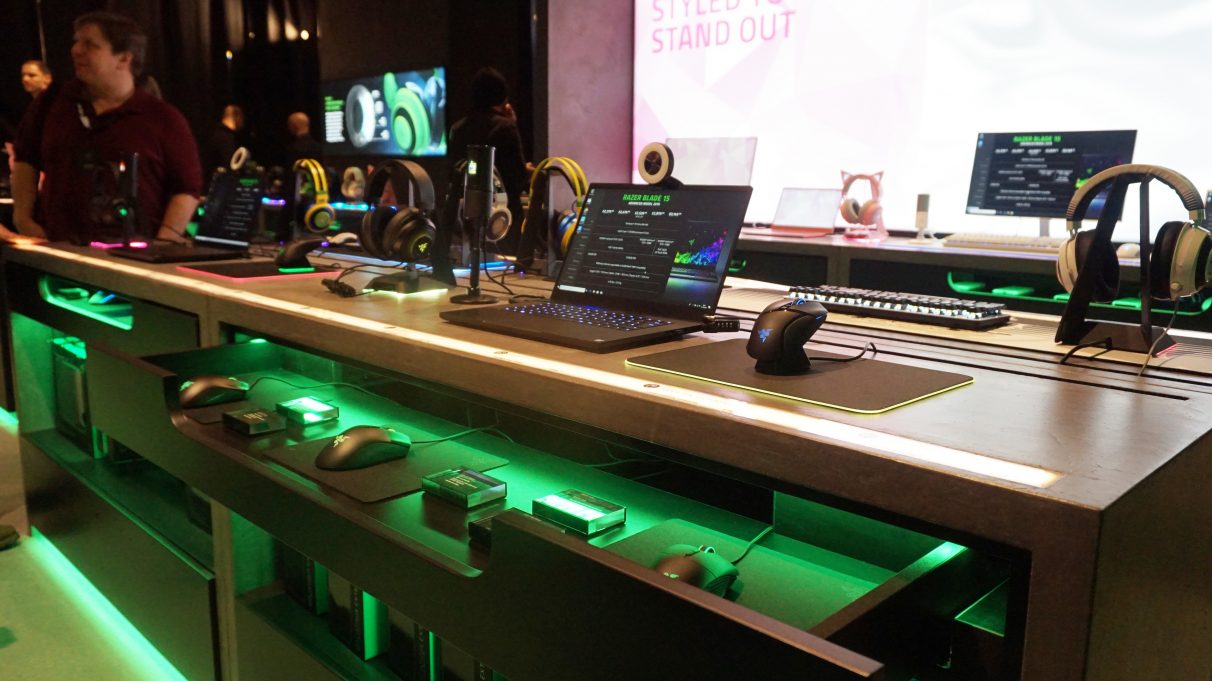 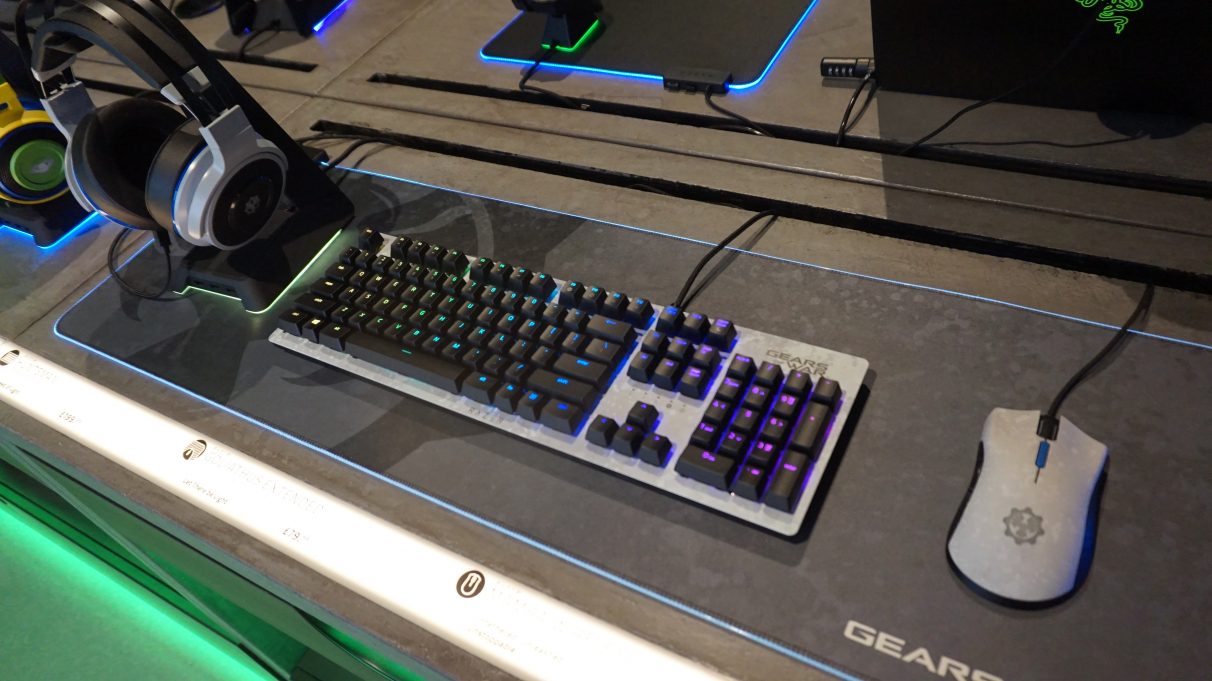 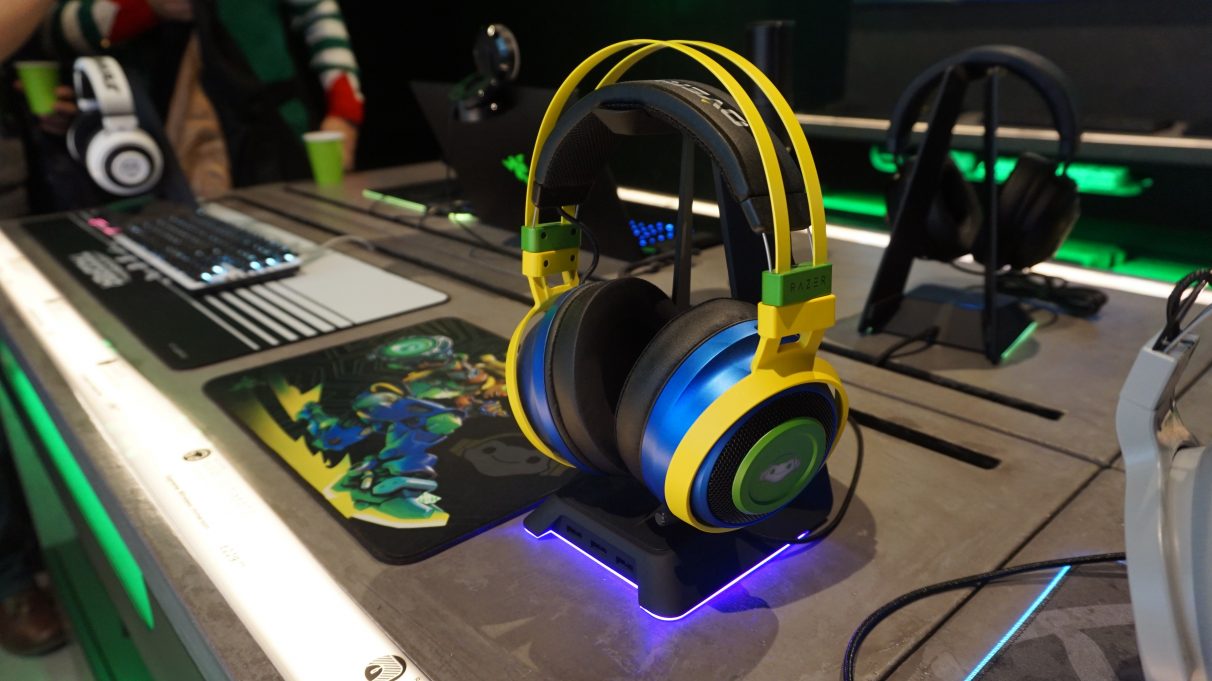 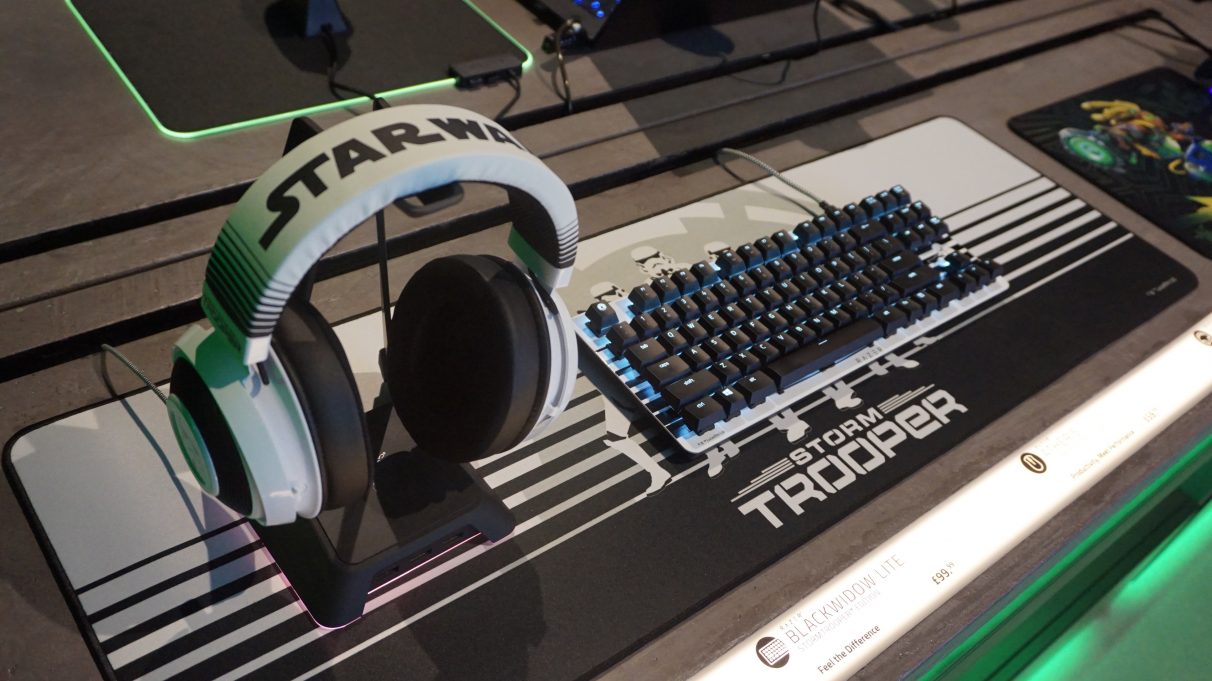 Either way, all that’s just one half of what Razer’s London store has to offer. There’s also an entire basement bit down below where you can come and play games with your mates, do a bit of streaming or amateur shoutcasting, or just generally take a break from all the shopping you’ve just done thanks to the snakey hexagon-shaped seats next to the fighting stick-equipped Xbox One and PS4 TVs.

There are even green LEDs highlighting the way down there, too, I kid you not. 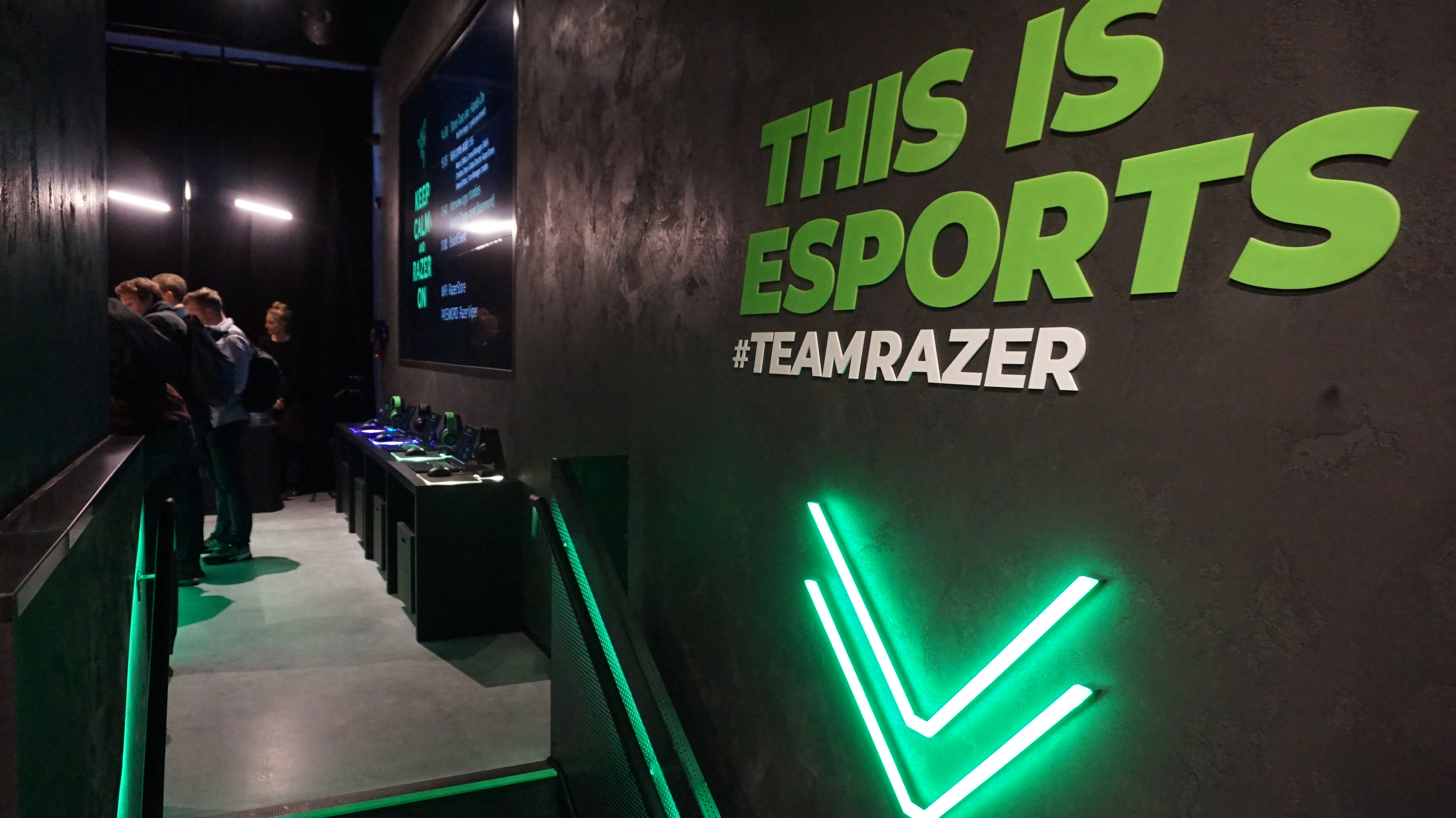 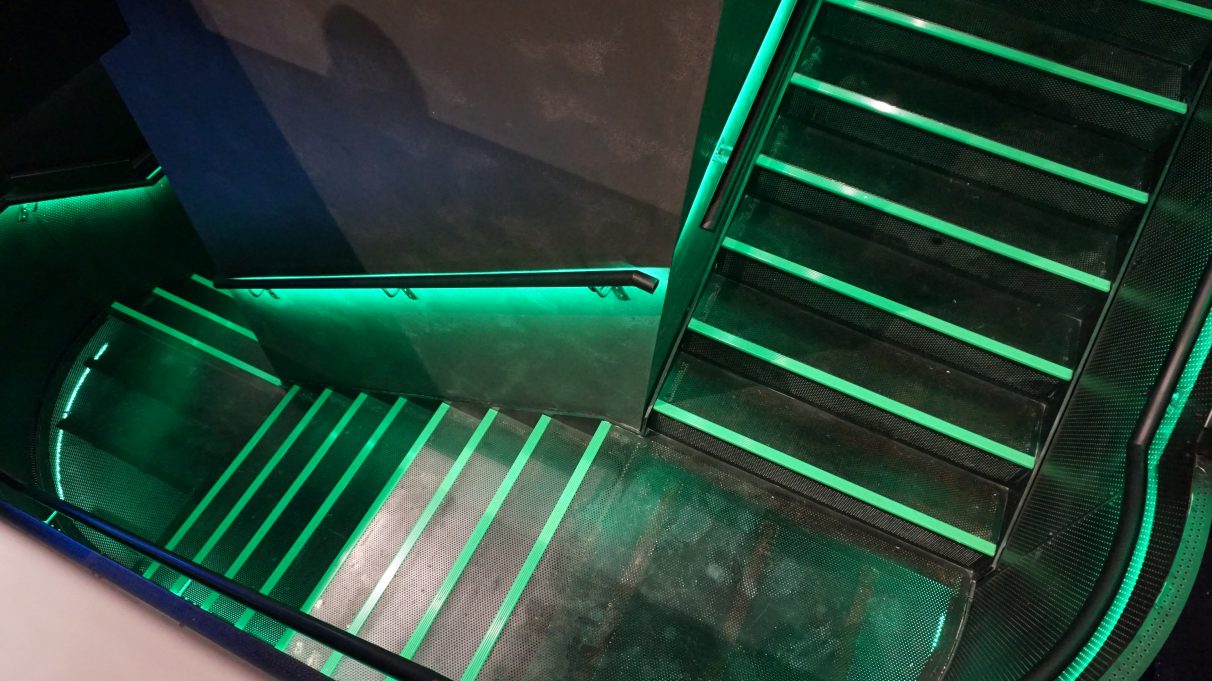 Told you there was a lot of green LEDs. Once you’re downstairs, though, it’s completely pitch black save for Razer’s plentiful supply of RGB Chroma strips, which run from wall to ceiling over their infinity mirror gaming space. Here, you’ve got ten PCs set up for pre-booked LAN parties, or you can just pull up a chair and start playing solo if there’s a free machine, a bit like GAME’s Belong centres. You won’t be able to hog a unit all day, though – the area will be policed and monitored, Razer told me – but you can definitely expect to play games for a couple of hours if you’ve got a couple of hours to kill in central London.

At the end of the PC bank, there’s a table space for people to try their hand at shoutcasting or even do some unboxing videos of their new kit, Razer said (although quite how successful the latter will be in the poor lighting conditions is anyone’s guess). 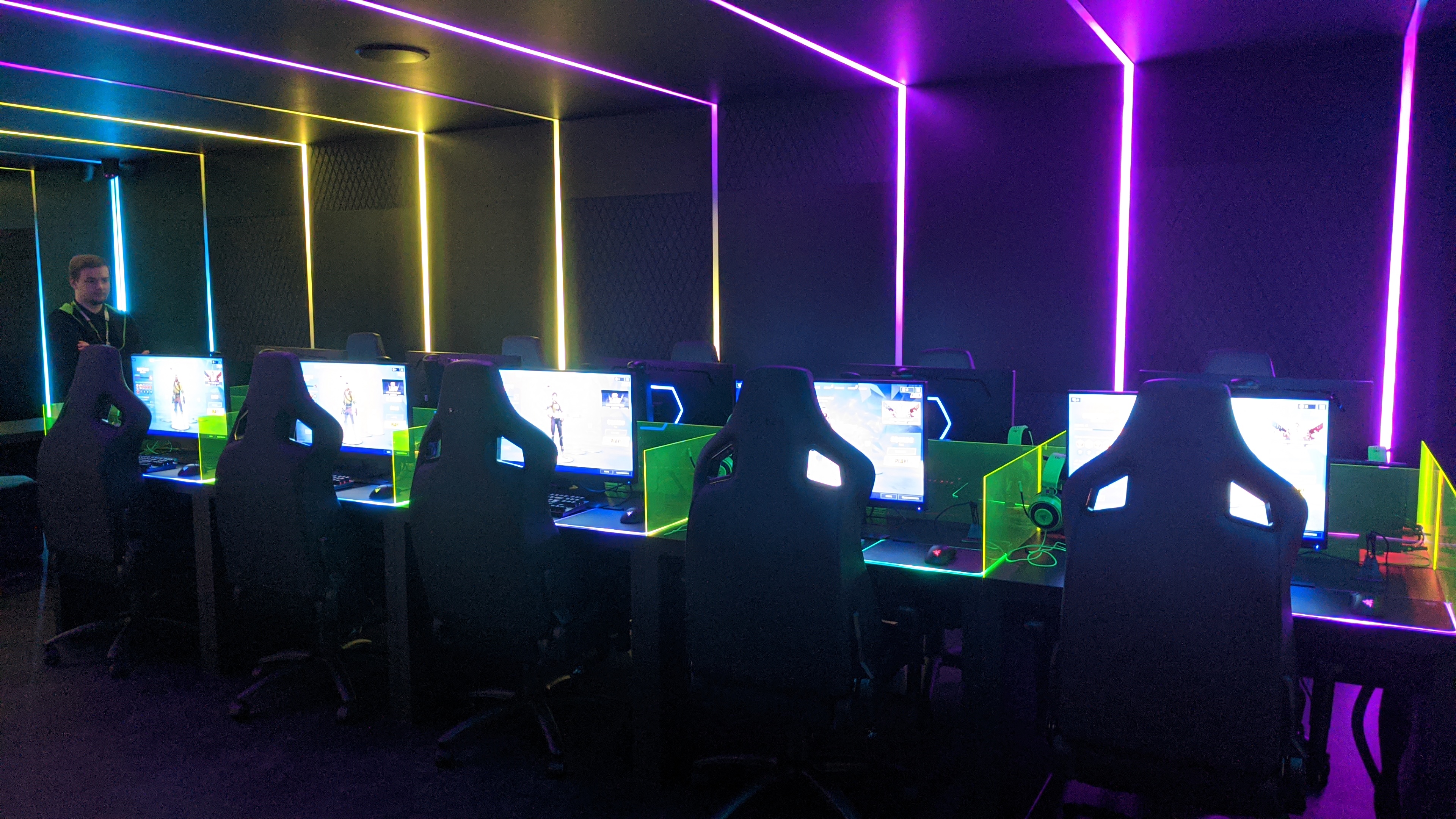 Still, as well as the ten-strong bank of PCs, there’s also a separate, dedicated booth for streaming as well off to the right. Replete with Razer’s brand-new Raptor monitor as well as one of their gaming laptops, I’d imagine that any would-be streamers will have to spend a fair amount of their allotted time making sure everything is just so – especially with no obvious green screen in sight – but as yet another way to try out a bunch of Razer products at the same time, it’s hard to argue with. 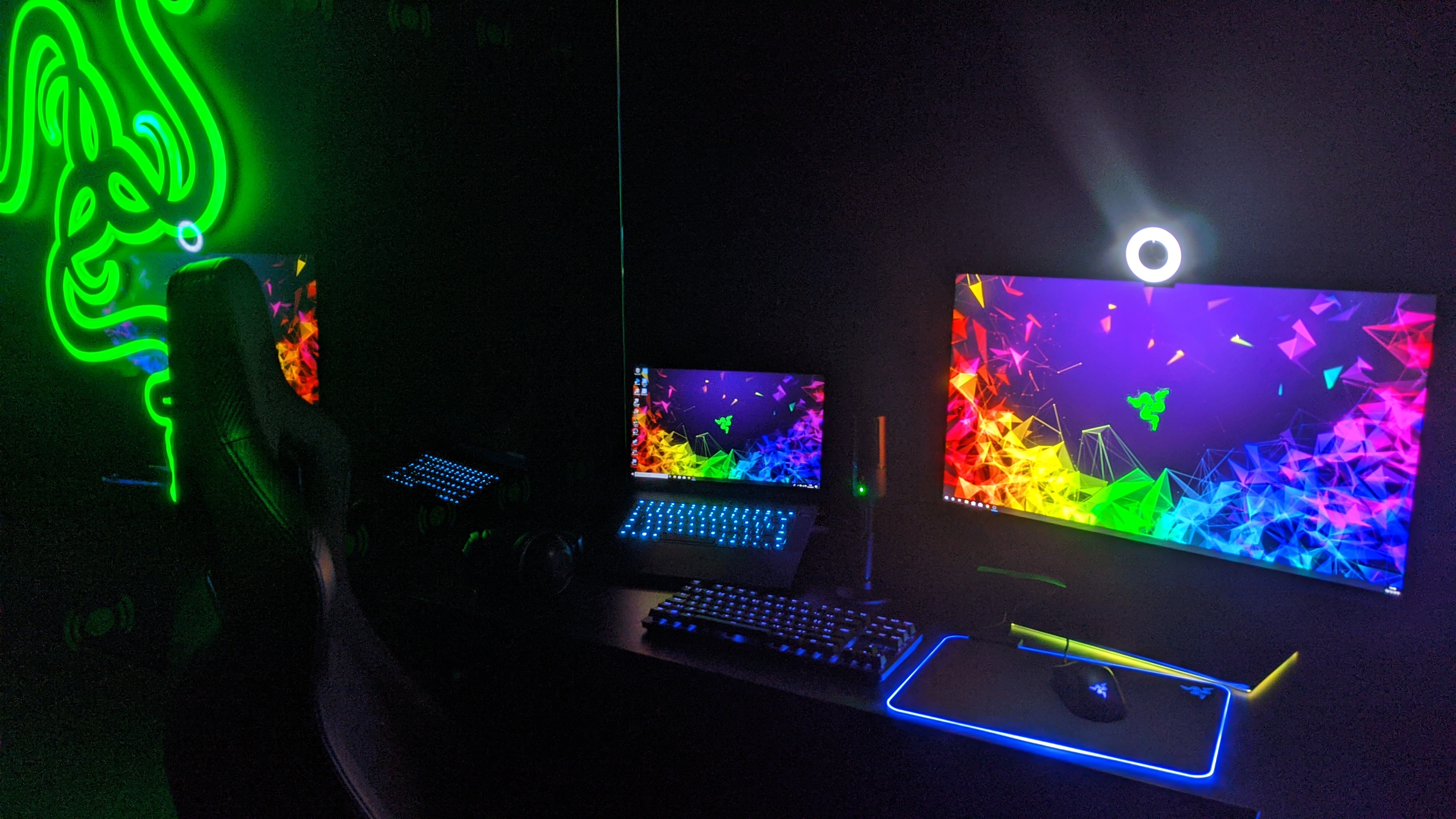 Then, finally, round the other side of the PC bank is that aforementioned chill out zone. Razer envisage that people will use this space to come and hang out during the day if they’re in the neighbourhood (it’s just a stone’s throw from Leicester Square tube station, after all, and right in the heart of London’s China Town), although quite how relaxing it will end up being with dozens of teenagers vying for the next spot on LAN bank remains to be seen.

Either way, it’s a good spot for watching other players show off their skills, as there are two TVs here as well hooked up to an Xbox One and PS4, giving visitors another opportunity to try out Razer’s controller range as well as their full-blown fighting arcade sticks. 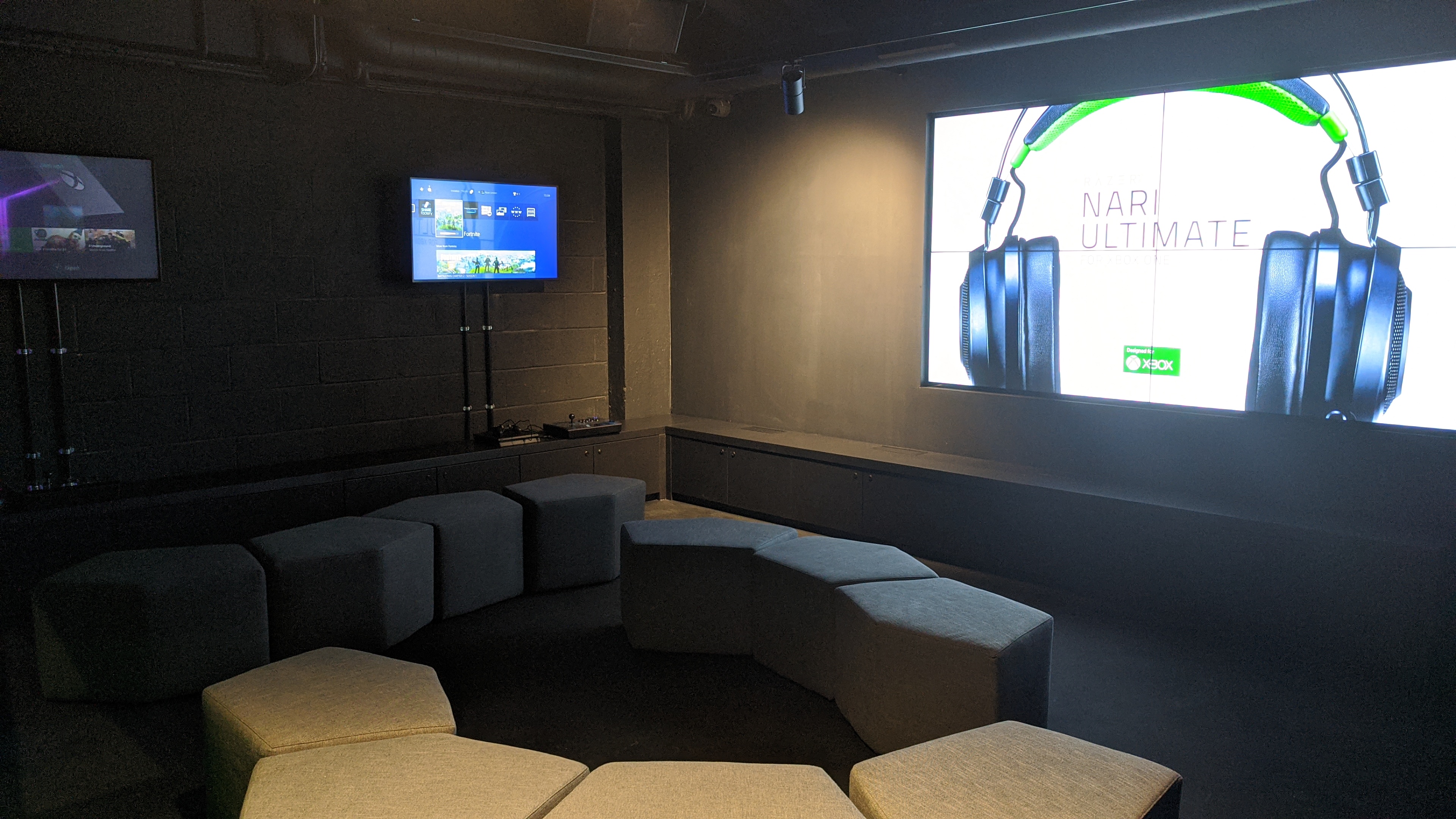 And that’s pretty much it. The only thing you won’t be able to do at the Razer London store is take back products you bought online or get them repaired. You can still return products you bought in-store, but if you ordered something off Razer’s website that either needs some TLC, then you’ll have to go through the usual online channels.

Still, as a general shopping experience, I can definitely see it attracting the same kind of crowds that like to hang out in Apple stores all day, even if Razer as a brand and a PC hardware manufacturer are infinitely more niche than general consumer stuff like iPhones and iPads. Complete PC novices may find its overly green and black interior a bit intimidating when they first walk in, especially if they don’t even know who or what Razer actually are, but for people who know their stuff, it’s probably one of the best opportunities going to really get hands on with Razer’s peripherals before you buy. 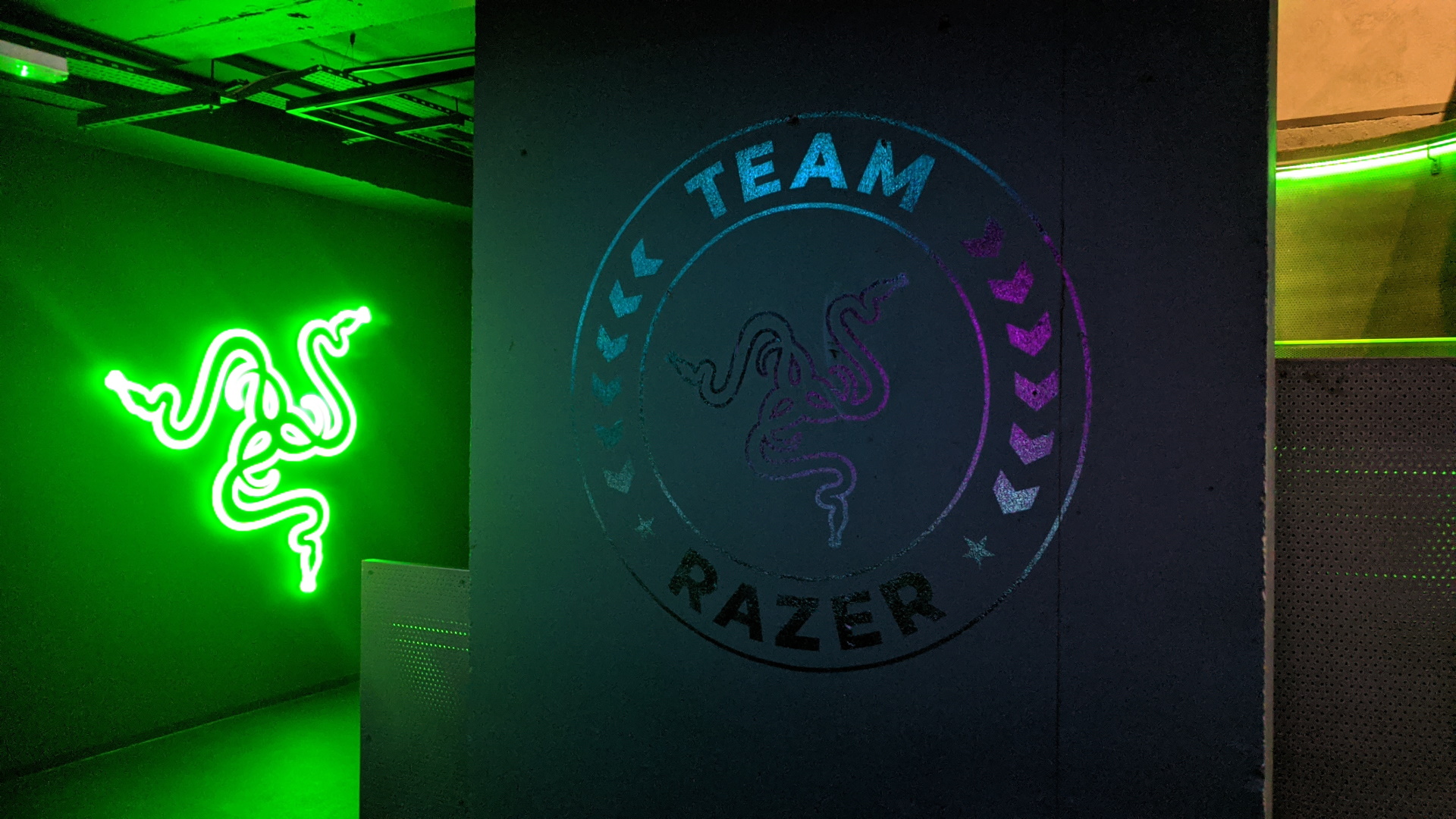 It’s also a good opportunity to try your hand at other PC bits like streaming and shoutcasting, too, especially if you’ve neither the budget or the equipment to do that kind of thing at home. The amount of space available to browse and try things out could be an issue if it continues to attract the kind of crowds seen over its opening weekend, of course, but I’d imagine the general day-to-day foot traffic coming off Charing Cross Road will be a lot more manageable in the months to come.

Is it enough to make you want to go to a Razer Store, though, and would you like to see more stores like this open up for different PC kit makers? Tell us in the comments below.