Planet Zoo already got Rock Paper Shotgun’s “bestest best” stamp when it released in November. If possible, it is now even bestier than before with its first DLC which adds arctic animals to your zoo’s list of potential inhabitants. There are two new scenarios, new buildings, foliage, and—most importantly—polar bears.

The Arctic Pack DLC adds two new, seemingly quite different scenarios for you to attempt. The first is set in the actual arctic: the fjords in northern Norway where you’ll build a sanctuary for arctic animals. The second is in Mexico where you’ll expand an existing zoo and attempt to make it habitable for all of the animals that would never naturally be subjected to near-equator temperatures.

As Nate Crowley said when telling us wot he thinks of Planet Zoo, this DLC has seen me coming. I love snow levels and snow maps and winter in-game events and just about anything snow-covered in any game. I also like polar bears a lot. Consider my opinion potentially compromised.

As the resident polar bear liker, I feel it is my sworn duty to call your attention to one specific detail. Nate called Planet Zoo’s animals “profoundly beautiful” and “delightfully real,” which extends to the bears of the arctic DLC. In many, many games with bears you’ll find that polar bears or black bears are re-colored versions of a grizzly bear or black-ish bear all sharing the same anatomy.

It’s a reasonable concession given the demands of game development. One bear model will do, really. Still, I always find myself a bit disappointed that my beloved polar bears are just reduced to “white black bears.” For Planet Zoo, that simply won’t do. Look at these lovely bears and their obvious individuality. That face profile is unmistakably a polar bear. As I said, I’ve been seen. 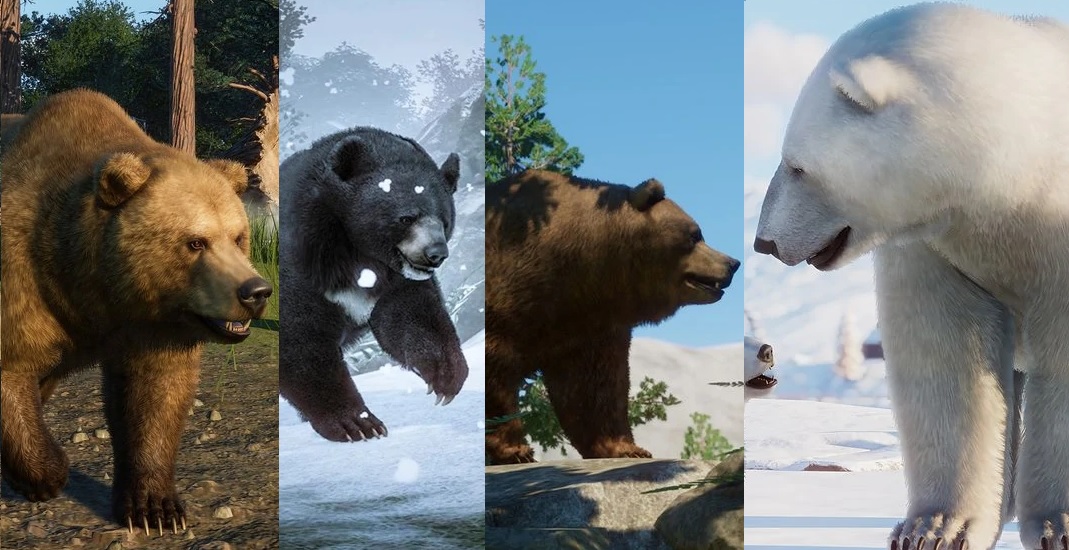 Image credit: Bear pictures submitted to the Planet Zoo wiki by TheAgent41, DeeFoxy and Frankenstein’d by me.

A free update for all players has rolled out alongside the new DLC. According to Frontier Developments, it includes a range of fixes and improvements such as “a new aging slider to slow the animal lifecycle, immediate family members have been added to the animal info panels, new heat maps including crime and inbreeding, new nature assets, enrichment items and a range of fixes and improvements.” You can read the full 1.1.0 update notes in Frontier’s Steam news post.

Planet Zoo jets off to Australia next week