AMD announced the latest graphics cards in their new Big Navi family last night, the RX 5600 and RX 5600 XT. Much like their RX 5500 and RX 5500 XT cousins, the regular RX 5600 will only be available in pre-configured systems you buy from PC builders. The RX 5600 XT, on the other hand, is going to be the one you buy separately to stick in your PC yourself, and it’s going to cost $279 when it launches on January 21st 2020.

Billed as the “ultimate graphics cards for 1080p gaming”, the RX 5600 XT will be going head to head with Nvidia’s GeForce GTX 1660 Ti when it launches in a couple of weeks time, but does it have the chops to knock it off its best graphics cards perch? Here’s everything we know so far.

Built using the same RDNA architecture as AMD’s other 7nm Navi GPUs, the RX 5600 XT is supposedly up to 20% faster than the GTX 1660 Ti according to AMD’s testing figures, although naturally a lot of their figures are from games that have been built with AMD’s GPU’s in mind, such as Gears 5 and The Division 2. As such, I’ll have to wait until review samples are available before we can see how it stacks up across a wider variety of blockbuster games that aren’t so favourable to AMD GPUs, but if the 20% figure holds true, then that’s quite a significant jump over its Nvidia rival.

In esports games, on the other hand, the performance gap looks like it’s going to be much smaller, with AMD claiming only a 10% lead over Nvidia here. In the grand scheme of things, that will probably translate to naff all when you actually sit down and start playing a game, as AMD’s figures showed the RX 5600 XT just 6fps ahead of the GTX 1660 Ti in Apex Legends (124fps vs 118fps), around 15fps ahead in Fortnite (126fps vs 111fps) and 14fps ahead in World of Warcraft (147fps vs 133fps). Unless you have a frame rate counter handy, then, you’re probably not going to be able to tell the difference. 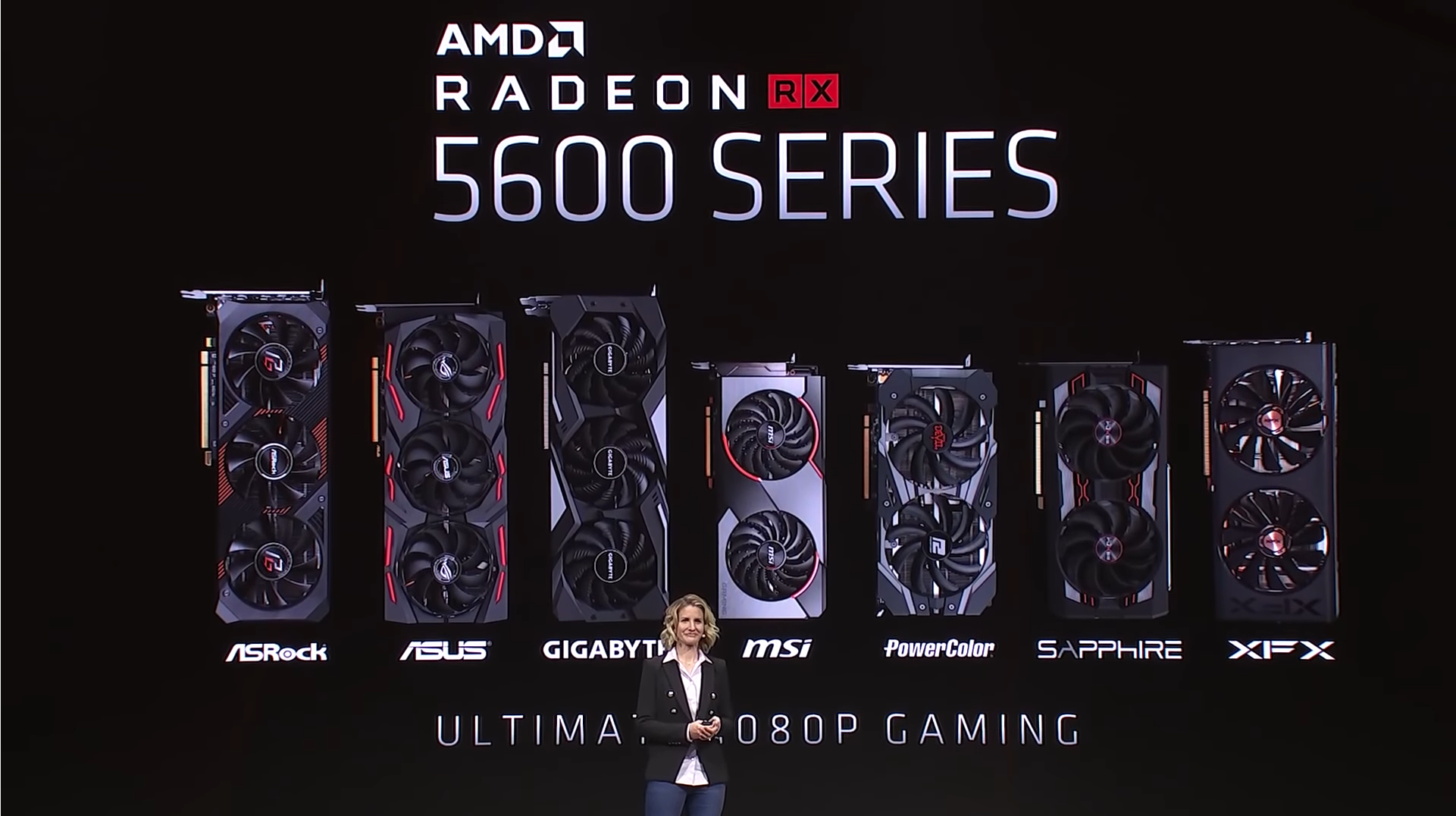 The AMD Radeon RX 5600 XT will be available in multiple versions from all the usual board partners.

Still, given that a GTX 1660 Ti costs at least $279 these days (if not quite a bit more), AMD could very well undercut its Nvidia rival if its performance holds up elsewhere – and especially if it comes with the same Monster Hunter: World – Iceborne Master Edition game bundle as the RX 5500 XT. That’s not confirmed yet, but I’d be surprised if it didn’t end up getting bundled in.

As for the RX 5600 XT’s specs, you’ll be pleased to hear that, unlike the RX 5500 XT, it’s only going to be available in a single memory variant (6GB of GDDR6), which makes things a lot easier. Here’s how it stacks up compared to the rest of the AMD RX 5000 family:

Naturally, I’ll be testing the RX 5600 XT to put it through its paces as soon as review samples are available, which shouldn’t be long given how close we already are to its release date of January 21st. Will it be able to become our new choice for maxed out 1080p gaming? It certainly looks like it’s in with a chance if AMD’s figures are anything to go by – unless, of course, Nvidia pull another price drop gazumping tactic like they did with several of their cards around AMD’s launches last year – but all will be revealed in two weeks time.