Earlier this week, EA revealed the new Tiny Living Stuff Pack for The Sims 4. It allows players to build cosy little homes, limited to just 100 floor tiles in size, and adds new little home items like a bookshelf that has an inbuilt TV. Plus: cosy knits! All very lovely. But the creativity of The Sims’ community has never been confined by size – people already build beautiful, functional homes in 3×3 squares! And, conversely, some of the most innovative builds are a little more… grand.

I love Grand Designs. I can’t help it. There is something soothing about watching people with more money than sense trying to build a mansion fit for the Hollywood Hills half underground in North London, forced to come to terms with the limits of their own ambition. Kevin McCloud bears witness to crumbling foundations, wrecked marriages, and the declaration of bankruptcies. Above all else, Grand Designs is a grand display of perseverance. And so, I wondered, “What are the Grandest Designs of The Sims?”

Here, I summon my inner Kevin to delve into the most pervasive (and disruptive) architecture I could find in The Sims 4. I traversed the vast landscape of YouTube videos, guides, Twitch streams, Tumblrs and even The Sims Gallery itself as a Simmer Anthropologist in an attempt to discern the ideals of the communities which build, and determine the grandest designs of all.

When I started playing The Sims (as a childe), houses were the least of my concerns. Much like in childhood itself, houses were merely a means to an end: girlish glee at controlling the lives of horrifically compelling simulacra, like a macabre puppeteer finally granted a semblance of power she was elsewhere denied. As I got older, as in real life, I came to understand the skill and science of a properly decorated house; from homely clutter to appropriately ombré dirt patches in the garden. Building houses (or “lots”) in The Sims 4 is one of the tenets of Simmer communities, and those who dedicate themselves to building houses call themselves (rather suitably) “builders.” Twitch and YouTube are full of “speed builds,” soothing sped-up videos of a house being built from frame to family in mere minutes beneath an emphatic and patterly voice-over. Speed builds sit alongside themed builds, guides, and challenges from the most popular builders, LilSimsie, James Turner, and Mr. Olkan (among others).

The Sims is a robust playground for these and other would-be homeowners to practice the fine art of suburban (sometimes urban, rarely rural, sometimes mystical) homeownership: that elusive product of a generational wealth gap in contemporary life. What would it be like to own a spacious 5-room family home on a manageable mortgage? I’ll never know! Simmer builders, however, can churn out Pinterest Floor Plan builds of “perfect homes,” with “curb appeal”, and there is neither a mortgage nor property tax in sight. Yet, despite this freedom, many Sims builds are remarkably tame. An overwhelming majority of builds available on the gallery, or touted as “perfect” or “dream” mansions elsewhere, are simply mirrors of what one might find on any Main Street, USA. Have our dreams become so pedestrian?

Yes, it’s true, the McMansion is alive and well in many a Sims build. Architecture and cultural critic Kate Wagner’s blog McMansion Hell has taught me almost everything I know about home architecture, and I heartily endorse it for your winter break reading. It serves as a simultaneous ode to and roast of contemporary residential architecture. For the architecturally curious, Wagner breaks down design principles such as masses & voids, balance and visual weight, proportion, and rhythm. The titular McMansion betrays the integrity of each of these principles in its pursuit of suburban wealth performance, and Wagner chronicles the worst offenders.

I, however, have neither a degree in architecture nor the desire to compare real-world houses to day-long snow day projects made by children. To avoid dragging innocent builds from the Sims community at large, I turn to EA. We’ll always have Bob Pancakes and whatever EA was thinking when they shipped the houses in the Realm Of Magic game pack. 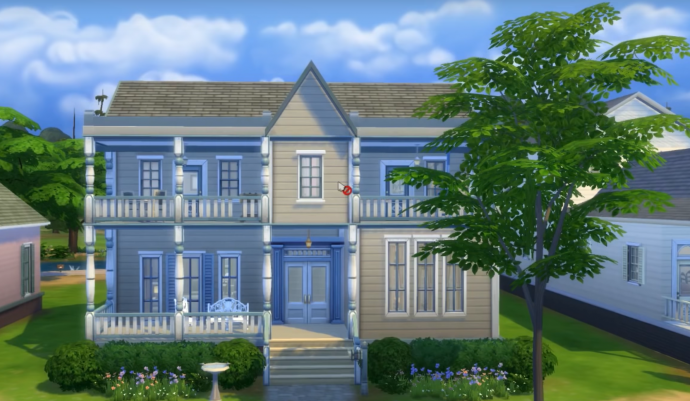 Listen: making a video game is hard. It’s a miracle that any video game gets made. But some of these houses suck. Bob Pancakes and his wife, Eliza, live in a soulless base game lot which begs a redesign. LilSimsie, in her attempt to do so, describes the house fairly succinctly: “When you look at it, you just feel… ugh.” 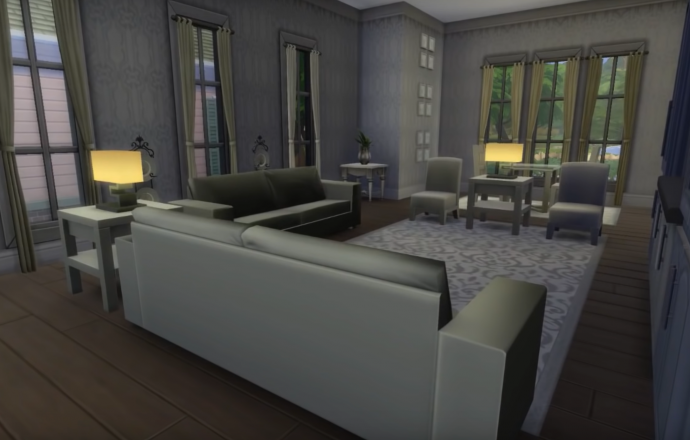 The Delgatos in Brindleton Bay live in a gigantic cliffside house, devoid of character but with questionable window placement and trim in spades: 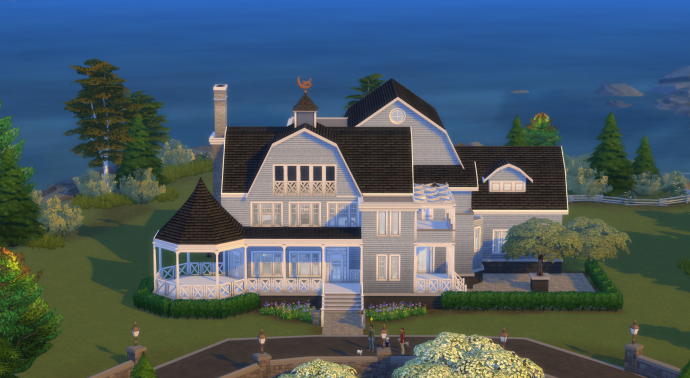 Please, somebody, explain these windows to me. And then the front door. Then the roof. 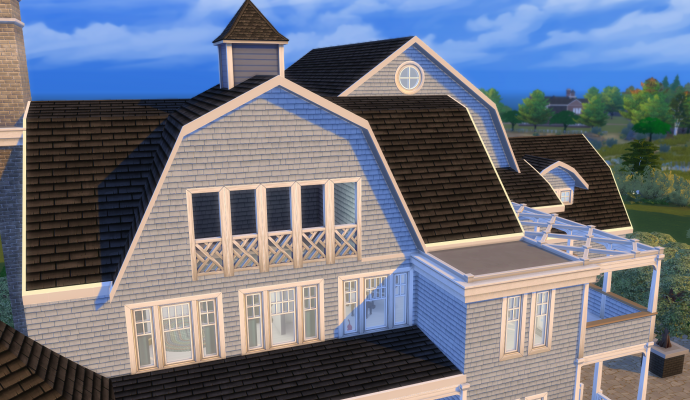 Why does this balcony have no door? Please, god, why?

And, for kicks, the house in Realm of Magic that never got a back door, despite stairs which implied otherwise: 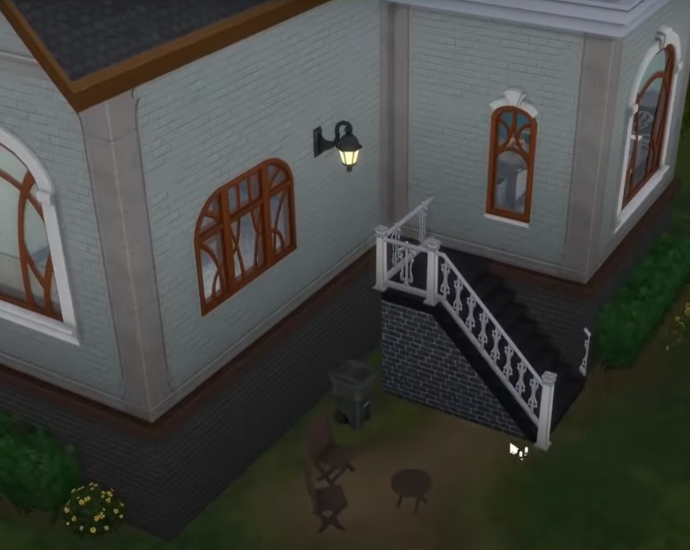 I can only assume that you have to enter the house using magic.

Let’s not even begin to discuss StrangerVille.

But what of the Grand Designs I set out to find? Must everything with four walls and a roof in The Sims be relegated to the status of StrangerViller, treated with derision and cynicism? Even LilSimsie’s attempts to rectify the sins of EA — while impressive –don’t quite reach the lofty heights of a Grand Design.

Builders have given us their pre-official stuff pack Tiny Houses (a hanger-on from the small house movement which will no doubt get even smaller once Tiny Living drops) and they have given us a perfect replica of Monica’s absurdly large New York apartment from Friends (a hanger-on from when Friends was a good television show). These immaculte rooms, from Lady Manatee Gaming, soothe me. These rooms, from Flubs79, are breathtaking. And may I submit, for your approval, these awe-inspiring builds from A Winged Llama? 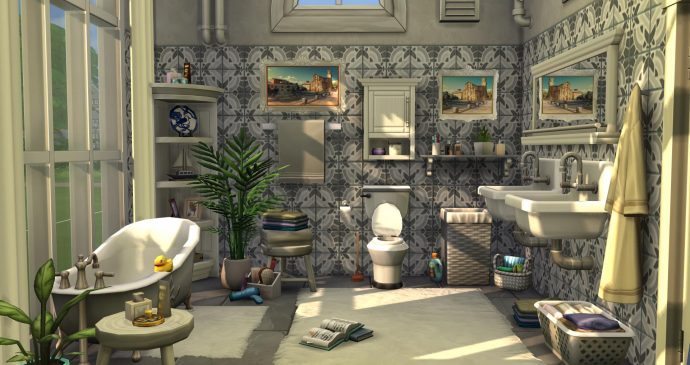 @Flubs79 has designed a bathroom I would live in. 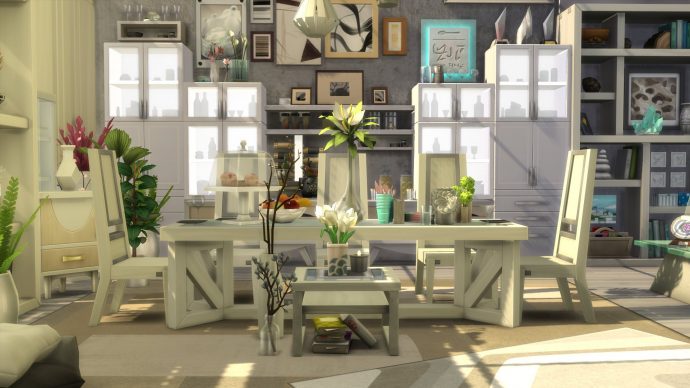 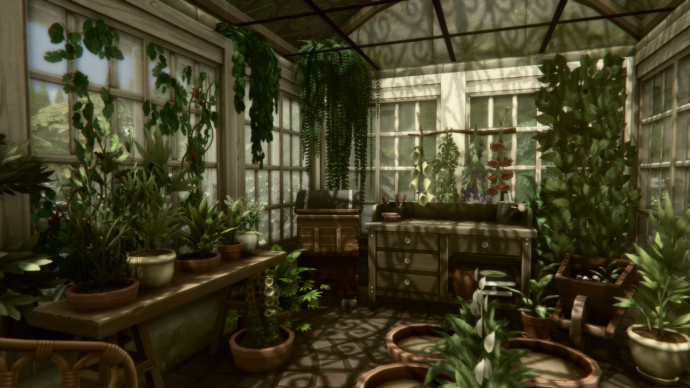 Move me into this house, from tumblr user A Winged Llama, and then kill me so I can die here.

These builds are impressive not least for their care and attention to detail. They feel like lived-in, storied places. And even though they are bewilderingly accomplished designs, I can’t help but wonder: What Would Kevin Say? Would they render him speechless? Where are the builds which speak to the drive and ambition of a truly silly, out-of-this-world, design? Where is the nonsense?

I will not beat around the bush any further: if you are looking for truly Grand Designs, I have found them. There are two undisputed monarchs of the Grandest Sims Builds: Kalonica and Pol Clarissou. 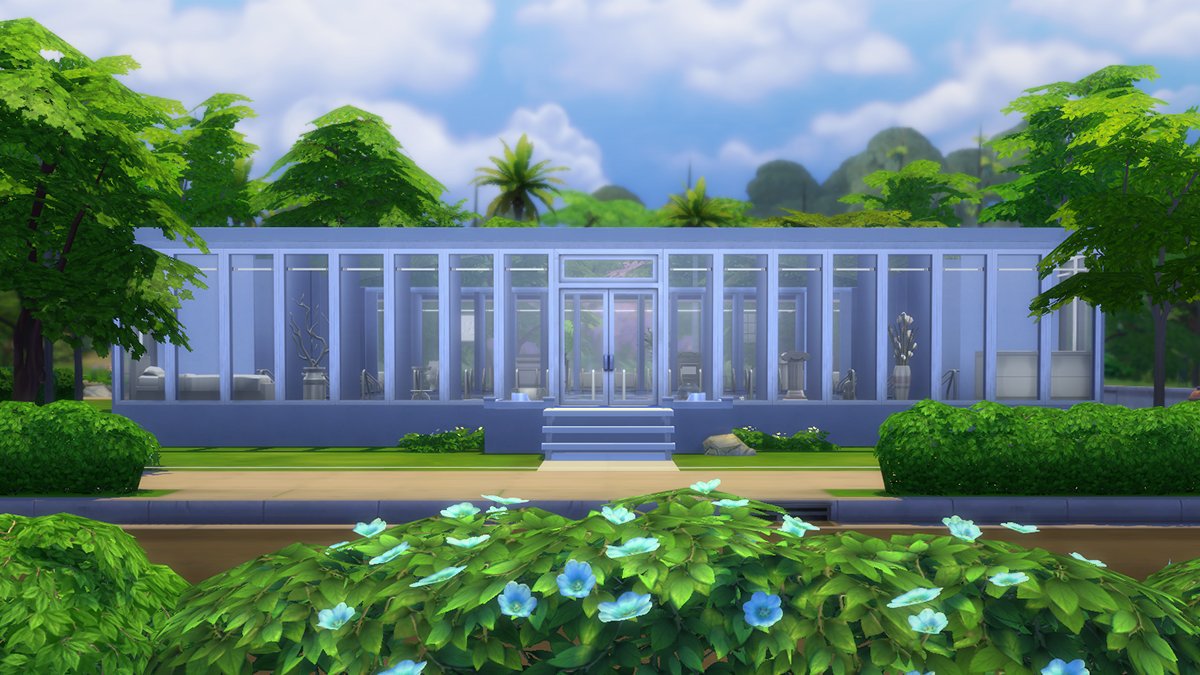 But it soon reveals itself. 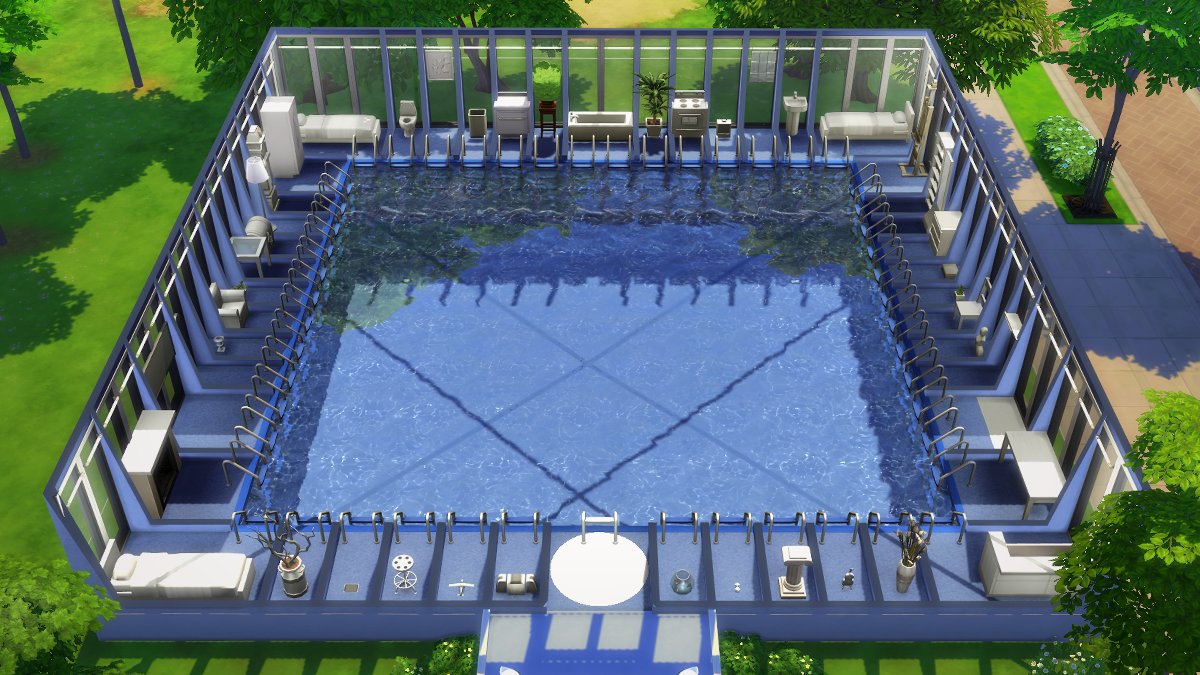 In case you can’t make it out from the screenshot, this is a large, square room filled almost entirely by a swimming pool. All the items needed for a liveable home – a fridge, a bed, a cooker, etc – are arranged around the sides and separated by single sections of wall. A Sim must enter the pool and swim from place to place to use anything. The bookshelf is opposite the armchair. The oven is on a different side to the fridge.

You will note, meanwhile, that the focal point in Pol’s lot here is a giant toilet. 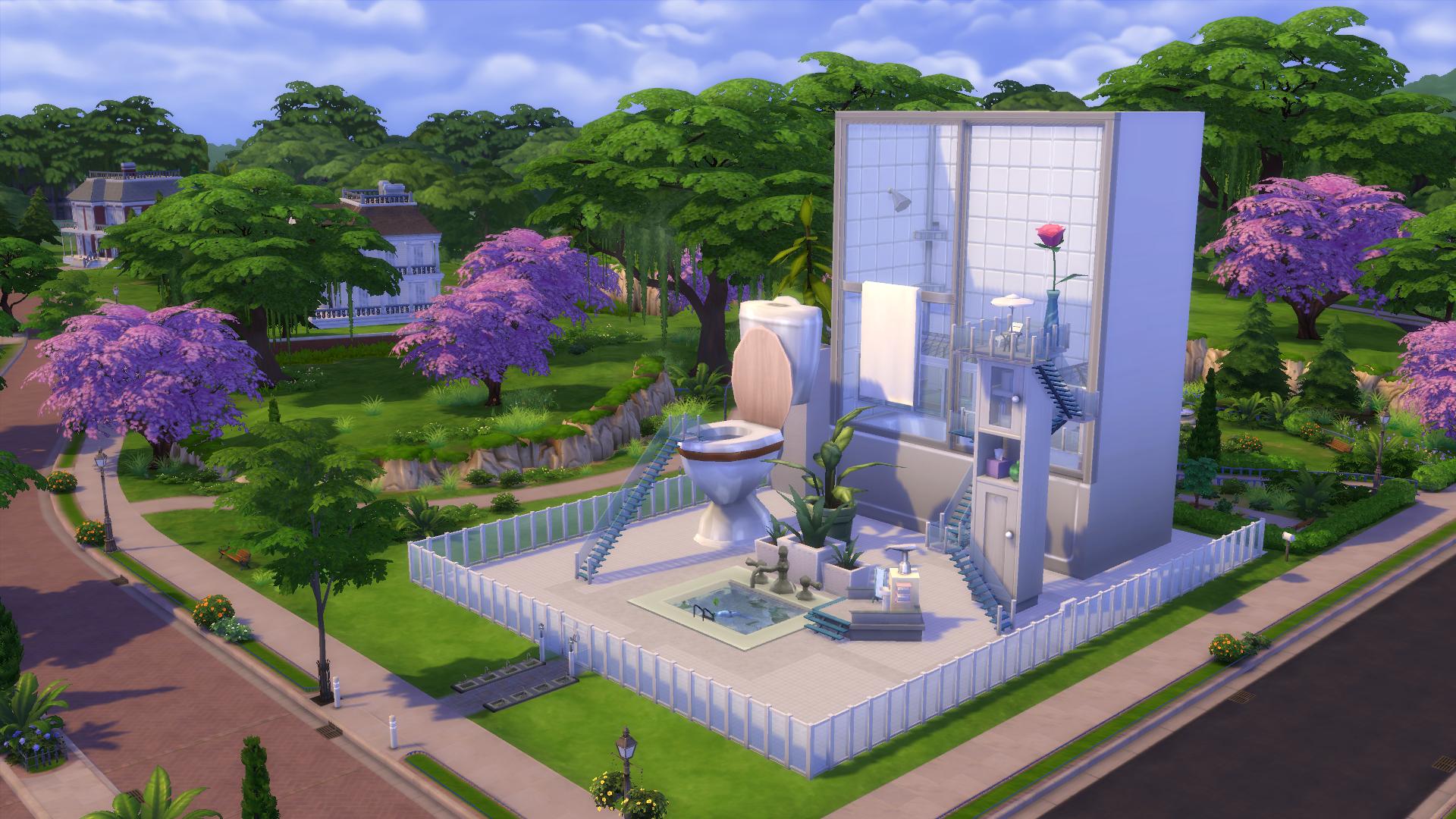 At second glance, you can see the whole lot is designed to resemble a bathroom suite. The toilet is, in fact, inside the toilet.

And here, Pol has made a Grecian temple for your Sim’s various activities: 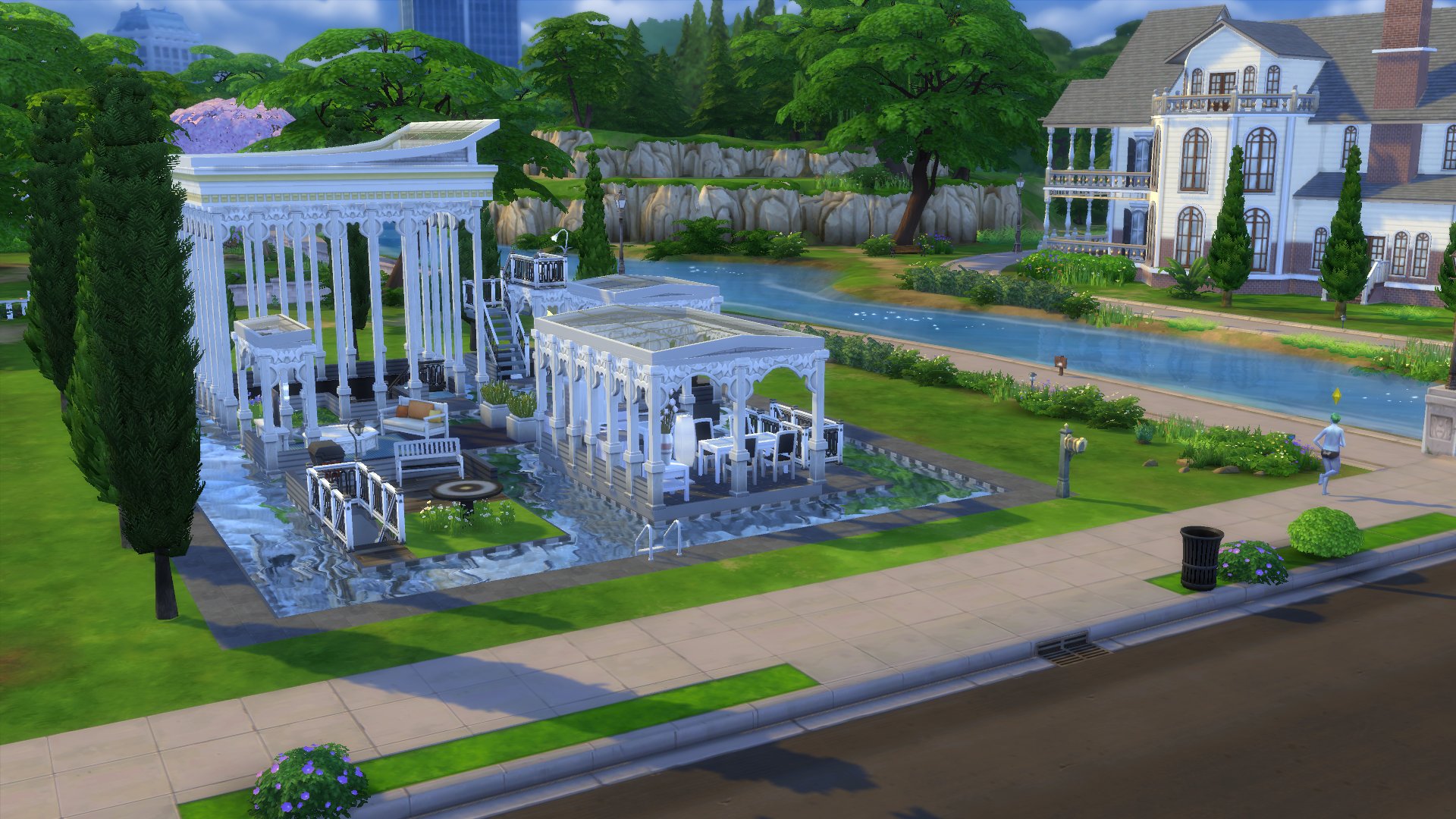 Both game developers, Kalonica and Pol seem to have a knack for creating lots which defy logic and decorum so forcefully that they wrap back around again into paragons of aesthetic. I am inspired by Kalonica’s poolhouse and cupboard compilation as well as Pol Clarissou’s gigantic toilet, which is called Bed Bath And Beyond, and temple home for their commitment to taking things so much further than I would have ever thought sensical.

The power and poignancy of each of these builds is a combination of their nonsense at such scale and of knowing that Sims will delight in whatever structure you deign to supply for them. A Sim will not begrudge a house which can only be entered via gigantic loo, or a house that is secretly a torturous pool with a single room per moodlet requirements. I have tried in the past to break them, but a Sim will only stare blankly back at me as they carry on living their life. And so, until a Sim begs me otherwise, I revel in these grand displays of inscrutable design.