Mellow. I see little value in reducing games to a single word, but here that word is inescapable. Coffee Talk is a light visual novel with a drink mixing system, that lets you gently nudge its subplots towards good or bad outcomes.

I can’t tell you it was a particularly gripping, dramatic or funny story. But it was very mellow. That may sound like faint praise. Perhaps it is, but it seems to be exactly what developers Toge Productions were going for.

Comparisons to Valhalla are inevitable, and fair. Coffee Talk is no rehash though, and it’s going for a very different mood. You’re the owner and only staff member of a late night coffee shop, in a version of Seattle where your usual fantasy races are a normal part of society. Humans, elves, cat people, even werewolves and vampires all mix here. And they’re all welcome to roll up and have a cup of coffee, tea, or whatever other vile concoction you can inflict on them by mixing together three of the game’s ten ingredients. Most of the small cast of characters will specify a chosen drink, or at least give strong hints, rather than the more cryptic demands of Valhalla’s customers. 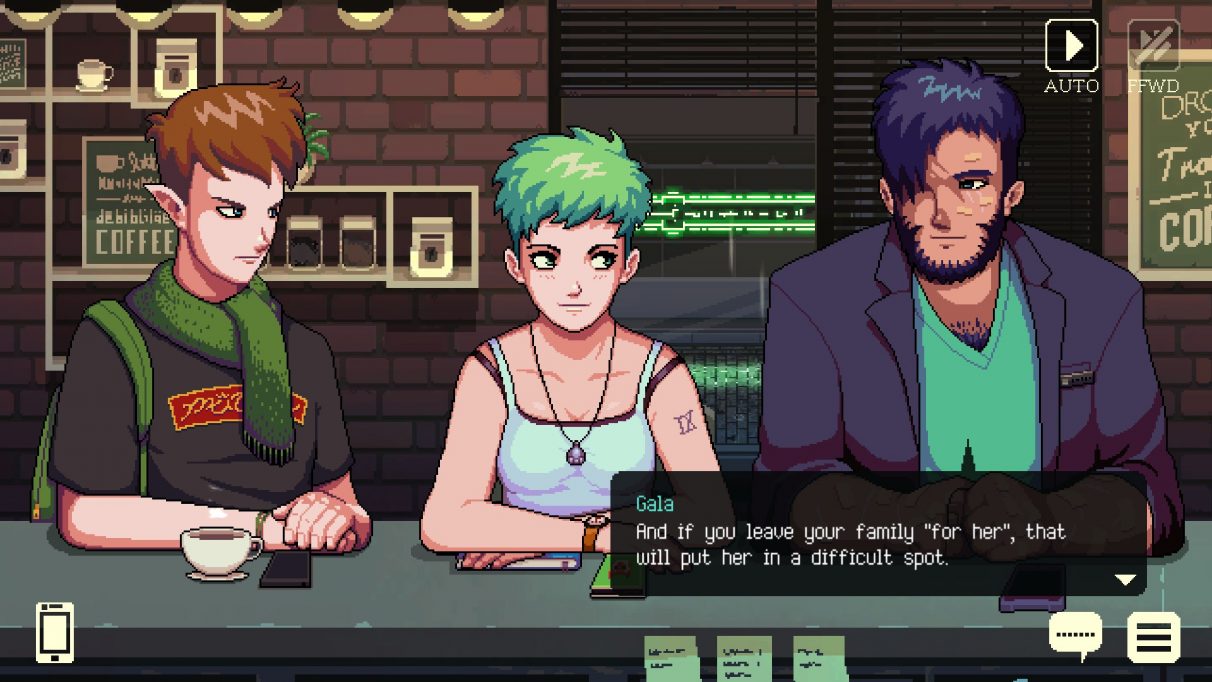 There was once a place in Canterbury called Coffee and Corks. It was the only good coffee place ever.

Coffee Talk’s most challenging mystery drink is requested by a werewolf, who’s looking for a calming remedy for his monthly “Fury”. But he already knows two of its ingredients, and you get several chances at guessing the other, so it’s not difficult. When I did an experimental run where I got everyone’s drinks as wrong as possible, he gave away the third one anyway. The few occasionally vague requests are easy to pass, though they sometimes unlock a bonus line of dialogue or two.

Mixing the drinks is straightforward and natural enough. Each drink has a primary ingredient like tea or chocolate and then two more from the secondary shelf (a nice touch I just clocked is that the milk takes up two shelves because it’s the only element that’s both primary and secondary). I can’t say it made me want a coffee the way Automachef made me want a burger, but then coffee is horrible anyway.

It’s not a challenging game by any measure, even in its optional ‘endless’ mode, which puts you on a timer, and gives you lots of custom orders with no dialogue. Nor is it all that dramatic. Where Valhalla, and visual novels in general, tend towards big stories or melodrama, Coffee Talk is pretty low stakes. Though its setting, and one subplot, involves racism and a few political references, there’s not all that much exploration of big themes, or dredging up of emotions, in its short playtime.

I was hoping for a little more, I think, and I was a bit surprised that it ended when it did. The micro-epilogues for the main characters were a nice touch, although on my milk run (where I gave everyone milk, unless they asked for milk, in which case they got an espresso) one of them seemed to contradict what had happened earlier. None of its characters particularly spoke to me, although I sort of liked the orc who initially just sat quietly on her own drinking tea while everyone else gossiped. 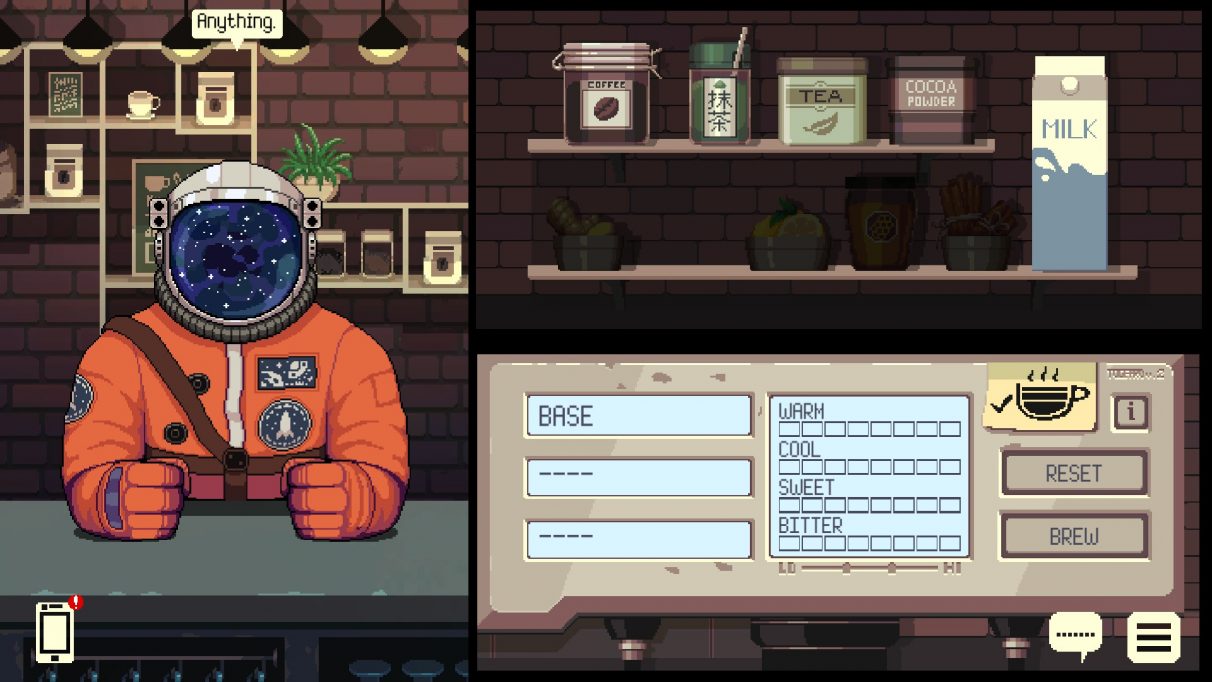 It was so comfortable that on my first night there I forgot it was a café and left without paying.

But I had a nice time with it. It was a strange kind of nice, more than the sum of its narrative parts. Coffee Talk has a warm, cozy ambience. Its inoffensively jazzy soundtrack (I’m not saying “lo-fi chill beats”, you can all go to hell) and attractive art co-ordinate to produce a mood that’s plain relaxing. I’d reclined almost to the floor by the end of an afternoon’s play, with my keyboard across my stomach and a cup of tea in my hand, lazily doling out pretentious coffees and writing insulting messages in the latte art. Silhouettes of cars and pedestrians amble past the windows, the rain drums on the window on some nights, and nobody ever gives you a hard time, even when you’re actively trying to antagonise them.

You have no drama of your own to deal with. Because of that, and again in contrast to Valhalla, it feels less like a slice of life concept, than it is just a comfortable place to hang around.

Sure, it’s a bit unlikely how all these strangers immediately bond and start talking about their personal lives, before giving each other slightly corny advice. Everyone’s remarkably receptive to this advice too, even when devoted regular Freya keeps telling the younger Rachel she’s “not an adult”, a phrase universally guaranteed to annoy the hell out of any 18 year old. But the days of Coffee Talk are very short indeed, so it’s easy to shrug it all off as a condensed time effect. 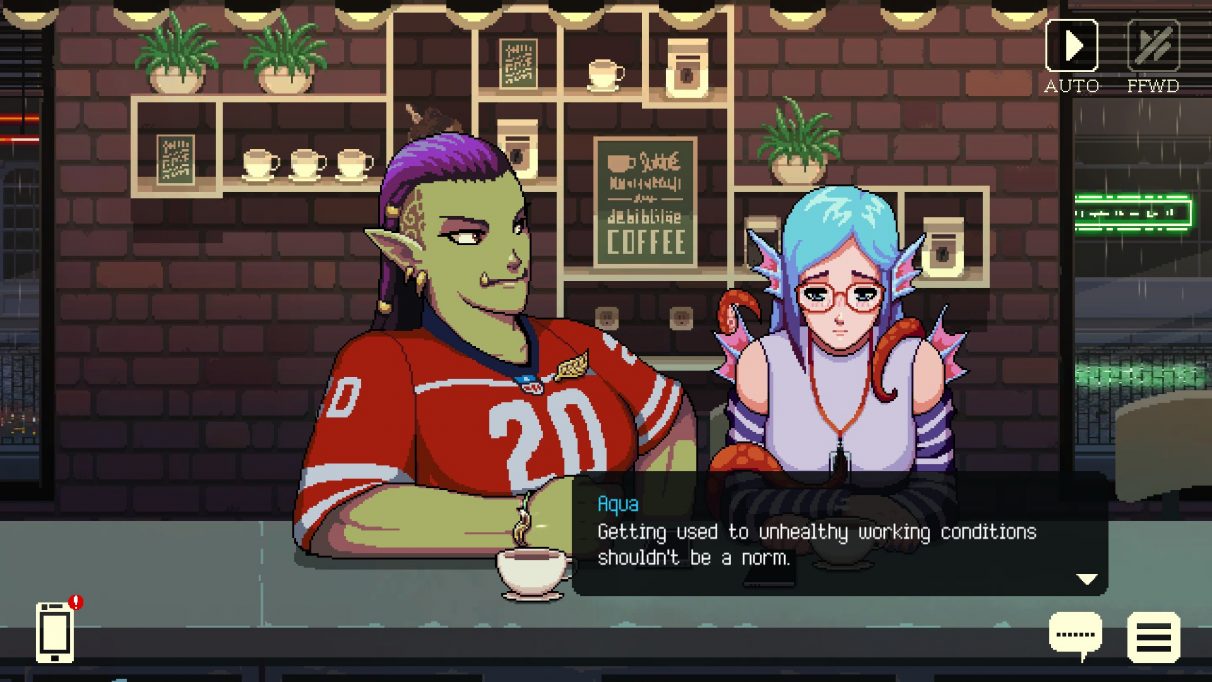 I used to make coffee in an Italian place. Lattes are as annoying to make as they are disgusting.

Like the animations, the camera does a lot of mood work, panning about and zooming somewhat to frame more intimate scenes, or to mark minor transitions. There’s one conversation where two characters argue, and the screen is filled with their two portraits, in the centre of which sits the third character they’re talking over, whose portrait gets smaller and more overlapped the more she’s overlooked. This almost belongs in a game with more raw conflict, and on its own it’s not much, but I’m bringing it up in attempt to work out why Coffee Talk works, despite everything in it being fairly inconsequential. There’s a disarming sincerity to it, and even its minor tampering with the fourth wall now and then is harmless (although unfortunately not really compelling enough for me to dedicate the time needed to unlock every detail it hints at). 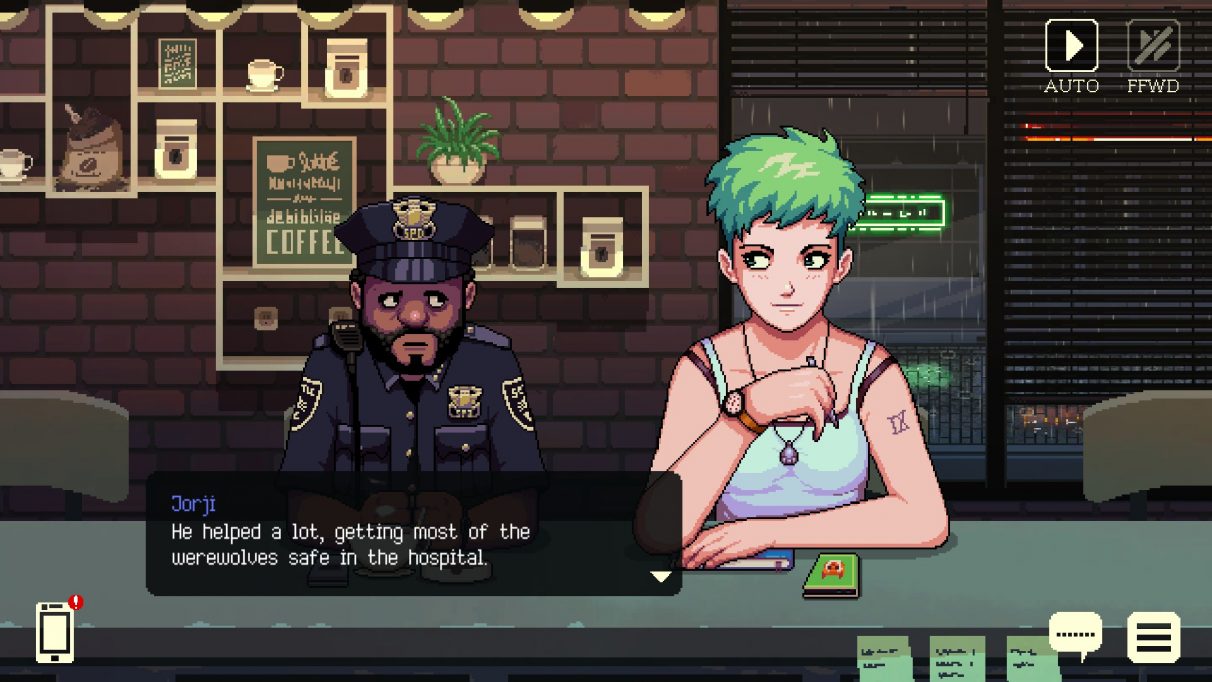 The fantasy references sound silly out of context. It acknowledges that elves are the worst, though.

Customers are remarkably forgiving when you get their orders wrong, with only one of them accepting my offer to make their drink again (I made it even more wrongly, natch). There’s no money management aspect, so no penalty at all for mistakes, really, except that the game’s handful of subplots will resolve differently. I am amused by the concept of making a cup of tea so catastrophically that it destroys someone’s long term relationship, but you have to shrug off the premise (it makes a kind of sense, actually, if you don’t take it literally. We’ve all made decisions on a whim, based on our immediate state of mind, and convincing ourselves our reasoning was more advanced than just “I’m in a good mood”).

Feeling comfortable and provided for is important. That’s not really a truth that Coffee Talk explicitly gets into, but it’s fundamentally what it’s about. It could have been longer, it could have been more substantial and dramatic. But it’s a good way to relax for a few hours.