Legends of Runeterra has a lot of skills and abilities hidden on each of their cards using keywords. They range from being able to prevent damage to a unit, to ensuring an enemy can’t block your attackers. With so many keywords though, there are some interactions that are not obvious to those who haven’t played much of the game, with the consequence being that you could lose the game due to a misunderstanding of what an ability does. 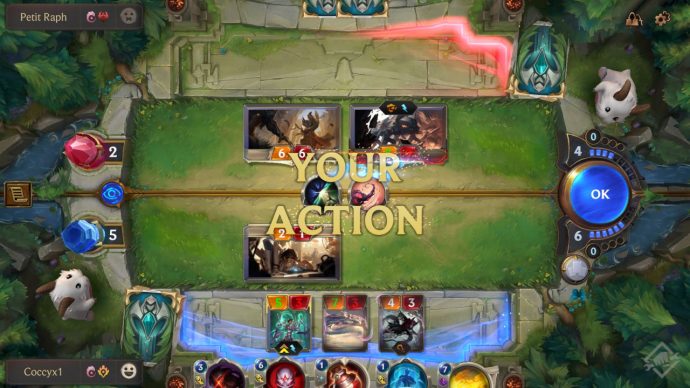 Keywords in Runeterra are single word terms that appear on cards. Some indicate the speed at which a spell is cast, while others grant that unit an ability to use in battle, or when an ability is triggered. Our guide to Runeterra keywords will go over all of the keywords in the game, explaining what they do and detail any interesting interactions that you should be aware of.

They appear on lots of cards in Runeterra and they can make all the difference in Runeterra best decks. They can also help with making informed choices during the drafting phase of crafting Runeterra Expeditions decks. 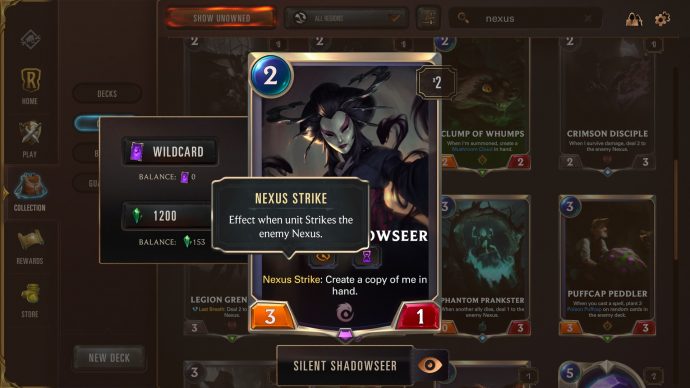 The first key difference I want to point out is when the game refers to effects that are triggered by strike and Nexus strike damage.

With Nexus Strike, the effect only happens when that unit specifically deals damage to the enemy Nexus. However, regular strikes to enemy units can happen either through combat damage or certain spells that say the unit “strikes” a target. In the case of the spell Judgment, it says that the target “battling ally strikes all battling enemies”. This means you’ll get the strike trigger for every unit the target of Judgment strikes. This can potentially create a lot of Spinning Axes for Draven, or draw a lot of spells for Rivershaper. 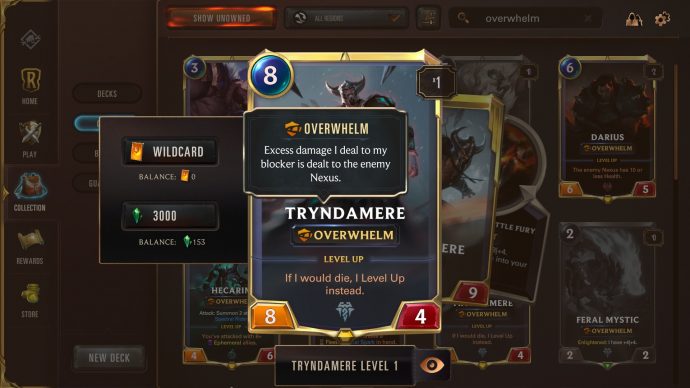 How Overwhelm interacts with Barrier and Tough

Overwhelm has some interactions that need to be addressed. If you block a unit with a chump blocker, then cast a spell like Absorb Soul to drain that blocker for health after committing the blocker, the attacking unit will not deal damage to your Nexus. This is because the game still considers it to be blocked. If that attacking unit has Overwhelm, it will still deal the remaining damage to the defending player’s Nexus.

When it comes to Barrier, it can prevent damage to that unit, meaning that blocking it is usually safe. If a unit with Barrier blocks a unit attacking with Overwhelm, the Barrier unit will still remain alive, but any Overwhelm damage over the Barrier unit’s health will still be dealt to the defender’s Nexus. Tough reduces the damage taken by one point of health, so a 1/1 unit with Tough is a 1/2 in the eyes of an Overwhelm attacker. A 4/4 Overwhelm unit will destroy a 1/1 Tough defender if it is blocked by it, but will only deal two damage to the enemy Nexus.

There’s one other thing you should be aware of when it comes to using the Tough ability. If any abilities or level up conditions rely on damage being dealt to that unit, that potential damage would not count towards that progress as it has been prevented. So if Braum has a spell that gives it Tough cast on it, then is blocked for two damage, it will only count as one towards the progress of his level up ability. 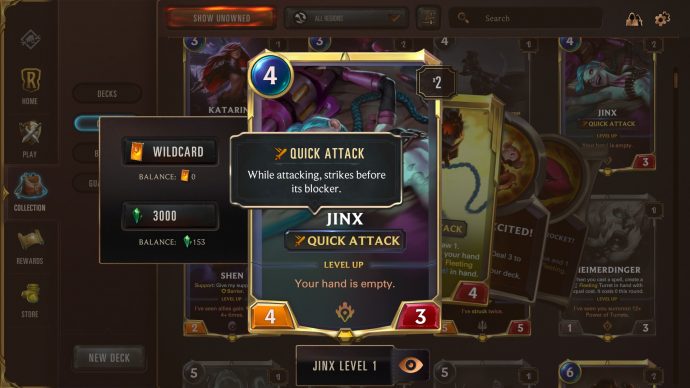 First thing’s first, here’s what these combat abilities do:

It’s mostly a safe bet that the unit with Quick Attack will deal enough damage to eliminate a defending unit without Quick Attack/Double Attack. Barrier and Tough can be used to prevent damage in the normal way.

Double Attack can be used to kill any unit with a Barrier, provided it has more attack than they have defence. This is because the Barrier is removed via the first attack and the defending player can’t cast spells in-between the Quick Attack damage and normal combat damage.

In the very niche case of a levelled up Lucian against an Unscarred Reaver that has a barrier cast on it, the Double Attack will damage it first, buffing up the Unscarred Reaver to a 3/3. They will then deal normal strike damage to each other, killing each other off in the process. 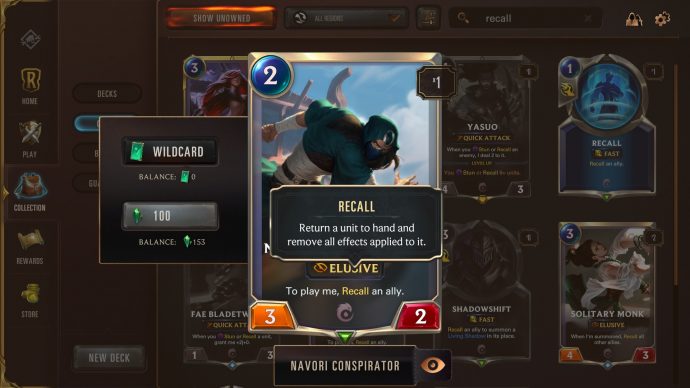 These two keywords refer to removing a unit from the battlefield temporarily.

What is worth noting in this particular case is what happens to damage sustained, as well as buffs and debuffs that were cast on that unit. Let’s say a 4/4 The Undying is the target of a spell with recall. Since its base stats are 2/2, it returns to being a 2/2 unit when it is recast. Revive also ensures that the unit comes back with its own base stats.

There is one notable exception here though. If the 4/4 The Undying is the target of Chronicler of Ruin’s revive effect, it will come back as a 2/2 unit, though because the original The Undying is killed first, you will get a 5/5 The Undying at the beginning of the next round thanks to its Last Breath ability. This leads us nicely to… 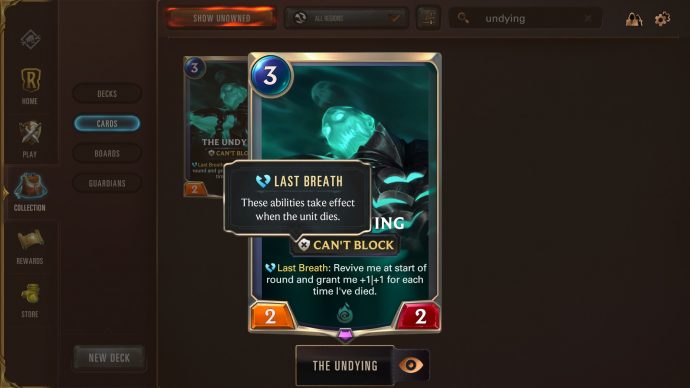 How Last Breath interacts with Capture and Obliterate

Removing Last Breath units normally means they get a triggered ability, but not in the case of Detain and Obliterate.

Put simply, if a unit is Captured via Detain or Obliterated with She Who Wanders, their Last Breath ability is not triggered because they either didn’t “die” or were annihilated into oblivion before they get the chance. Obliterated units also don’t level up Tryndamere or units like Thresh, Kalista, or any other units that do things when other units die. Note that the Capture ability just wants you to to capture “a unit”. This means that if you find a high-value unit is being targeted by a spell, or the enemy is using a board wipe, you can capture that unit with something that’s going to die that turn, meaning you don’t lose your valuable unit. 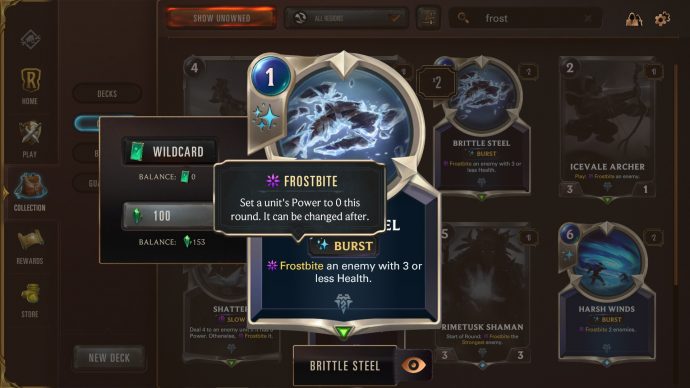 Another short but interesting ability to discuss here. Frostbite is an exclusive ability to the Freljord region.

There are a few things to unpack about Frostbite. Firstly, if a unit has zero attack power, it will not deal damage. So enemies with Barriers will retain their barrier. Some effects may also trigger as the Frostbitten unit now has below a certain amount of attack power.

The effect isn’t permanent though and any buff spells that increase attack power will still happen normally. Their normal attack is restored when the round ends. 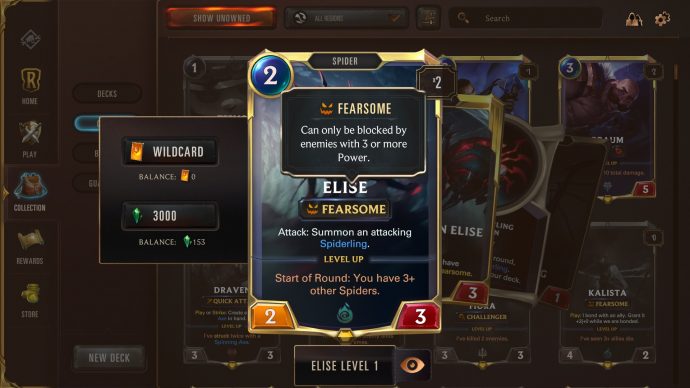 Fearsome is a great evasion tool for aggro decks as it bypasses chump blockers. It’s why you see tribal spider decks run Elise as she grants Fearsome to all allied spiders if she has levelled up.

The weirdness comes if you block a Fearsome attacking unit with a 3/3 unit of your own, then a spell is cast to reduce your power by two. Since you already declared your blocker, the unit will still block the Fearsome attacker despite only being a 1/3 unit. 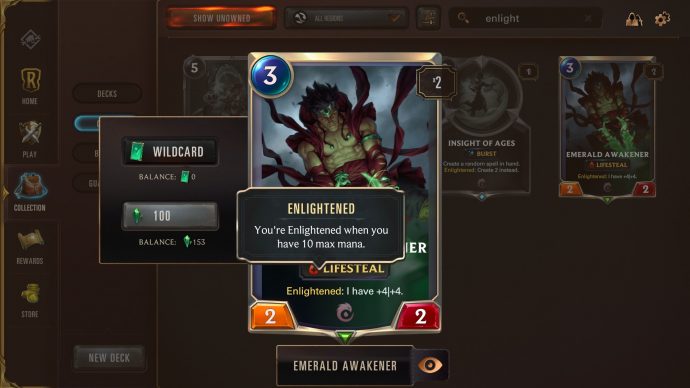 When is a player Enlightened?

Enlightened can give certain cards an extra bit of power or abilities that make them more powerful in the late-game, as you reach 10 base mana.

Note that I said “base mana”. This means that Enlightened does not take spell mana into account. 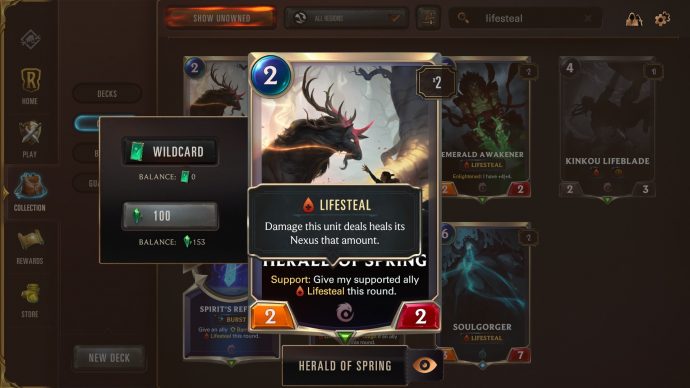 The difference between Drain and Lifesteal

Essentially, both Drain and Lifesteal have the same effect, they deal damage to something to gain Nexus health.

The key difference is where those effects are found. Drain is found on spells, while Lifesteal is found on units. Lifesteal additionally heals for the amount that you attacked for, not the health of that unit’s target. So if you have a 3/7 Soulgorger hit a 1/1 Affectionate Poro, you will still heal your Nexus for three life. 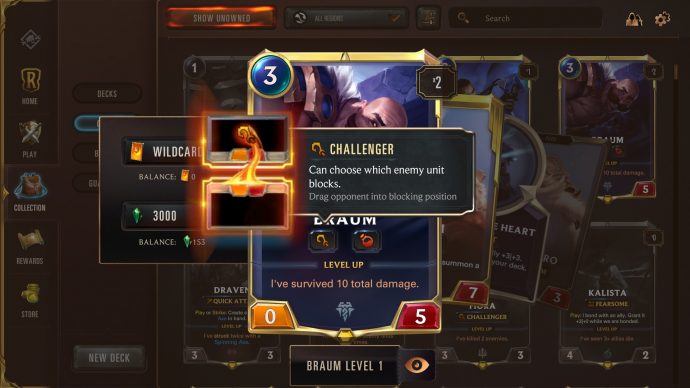 Both of these abilities can be scary to deal with, particularly if an aggro deck is heavy on the Elusive units to begin with. That doesn’t mean though that these Elusive units still have the ability while that player is defending. If you have a 4/3 Elise with the Challenger ability and attack with her, you can still lure in a 1/1 Elusive unit to block Elise’s attack. 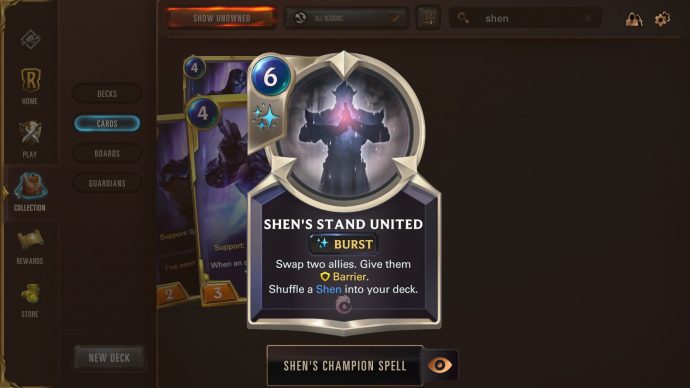 This ability is part of Shen’s unique spell “Shen’s Stand United”. It’s a burst spell that swaps two allies, then gives both of them Barrier. Swap isn’t a keyword as only Shen’s spell has this ability, but it is an interaction with some consequences. You can only swap units if you’ve declared your attackers/blockers for that combat phase.

You can swap between any two units, even if one of them is not a declared attacker/blocker. If an opponent has cast a spell to deal damage to it, the swap ability will make that spell affect the new attacker/blocker, rather than the one that you originally declared as attacking/blocking. 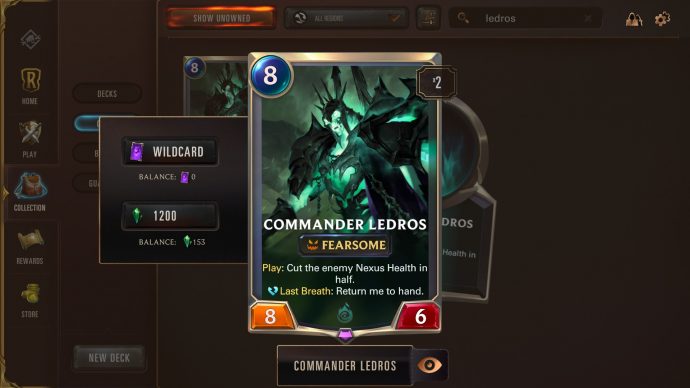 This big lad deserves a special mention as it’s the only card in Runeterra with such an ability. This is odd as other card games have multiple cards with this type of effect and it always works in the same way. When Commander Ledros’s ability reduces the enemy Nexus health by half, think of it as dealing half the damage but rounded up. This means that if the enemy is on 13 health, they are reduced to six health as half of 13 is 6.5. That 0.5 is then rounded up to add an additional one point of damage.

This is especially important as Commander Ledros can kill an opposing player’s Nexus if he is played while their Nexus is at one health. There are a couple of workarounds to his ability. It can be copied by Shady Character to reduce your opponent’s health by half, while cards that inflict Obliterate ensure he doesn’t return to the enemy player’s hand. 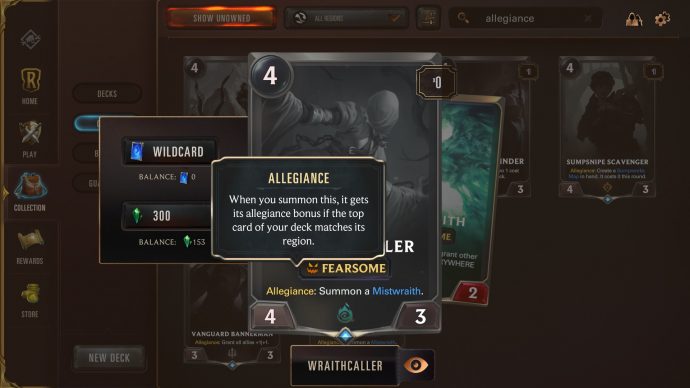 Finally, here are the rest of the keywords in the game and what they do. None of these have especially complicated interactions, but they’re worth mentioning as they have very different effects.

Updates, get your updates here!