Now streaming live:
A Panel Shaped Screen is a monthly column where Giada Zavarise explores how comics and videogames inspire each other. This time, Giada talked to award-winning cartoonist Jesse Jacobs about Spinch, the colorful platformer he’s working on with Queen Bee Games.

Jesse Jacobs is famous, but you’ve may have never heard of him. That’s because he’s not a game developer, but an award-winner comics author known for his intricate, colourful art style. Go read his comics, if you want to dazzle your eyes. Read Safari Honeymoon, about two newlyweds exploring a dense jungle full of weird creatures. Or read Crawl Space, about a troubled teenager who discovers a portal to a new dimension hidden inside a washing machine. Jacobs’ pages are absolutely bursting with stuff, like a defanged, cuter version of the impossible geometric spaces described by Lovecraft in his works.

Now, though, Jesse Jacobs is working on a game: a psychedelic, hard-as-nails platformer called Spinch.

Making games is hard. I don’t know why a cartoonist would want to make a game (or anyone at all, for that matter). So I asked him. He was kind enough not only to answer my questions, but to provide some exclusive, behind-the-scenes artwork from the game 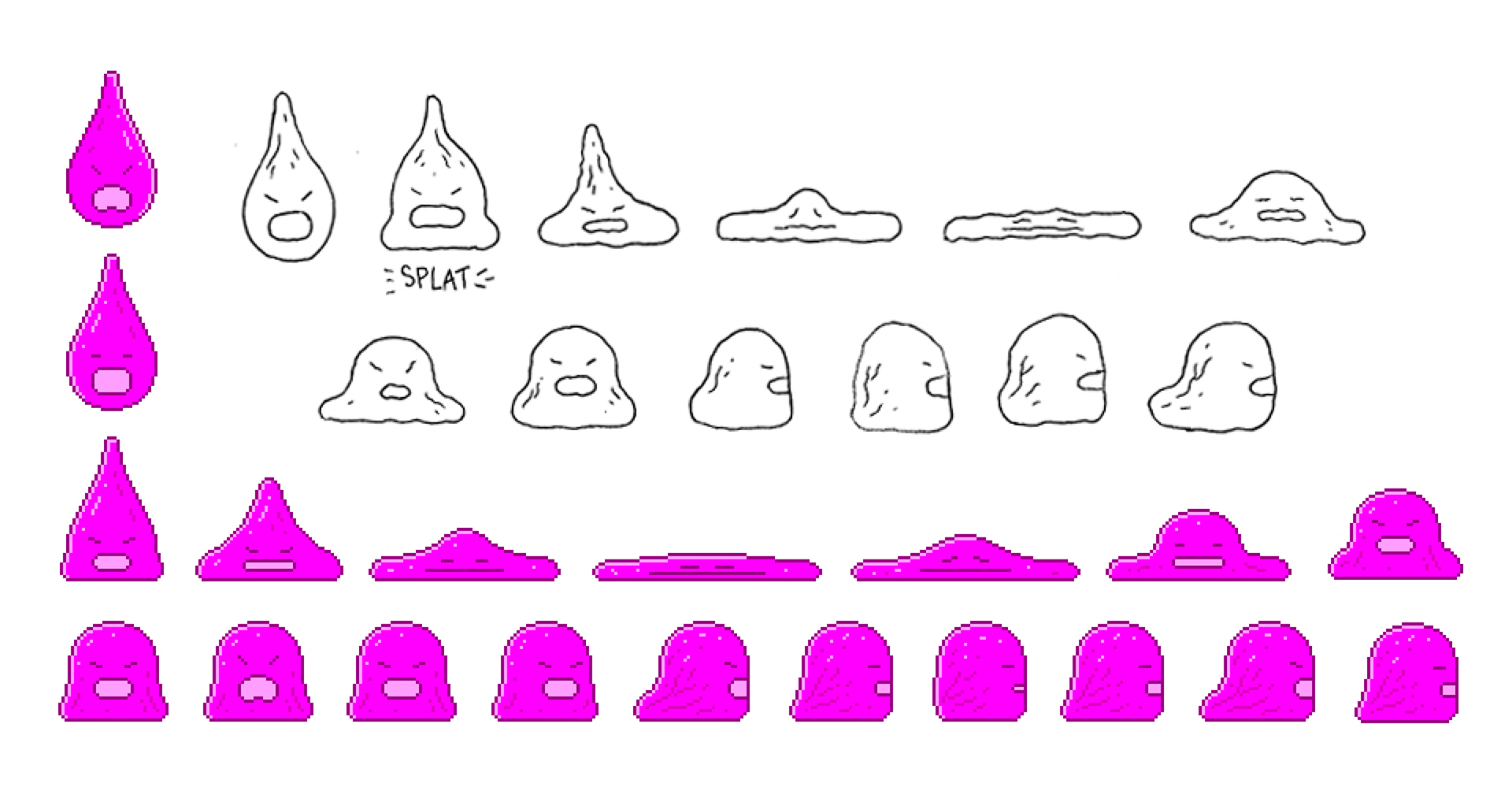 You’re supposed to be a cartoonist, Jesse! How did you end up making a game?

I knew Steve and Kathleen, the founders of Queen Bee, from years ago; we grew up in the same small place in the east coast of Canada. Like a lot of young people from that region, we all left to do our own things, follow our paths. I got into comics and illustration, fine art, and they started a game company. Years later, they contacted me out of nowhere with the idea of collaborating. I had never considered the idea of making a game, but it seemed like a great opportunity. I like trying new things, new approaches to making art.

Was it difficult, to switch from drawing comics to games? I know there’s a huge difference between a good illustration and a good art asset. A delicate equilibrium between “pretty” and “usable”.

I’ve worked in animation, so that helped a lot with wrapping my head around layering and technical aspects.

Aaah, you worked in animation! I wasn’t sure, but now everything is clear. Sequences like this always made me wonder: 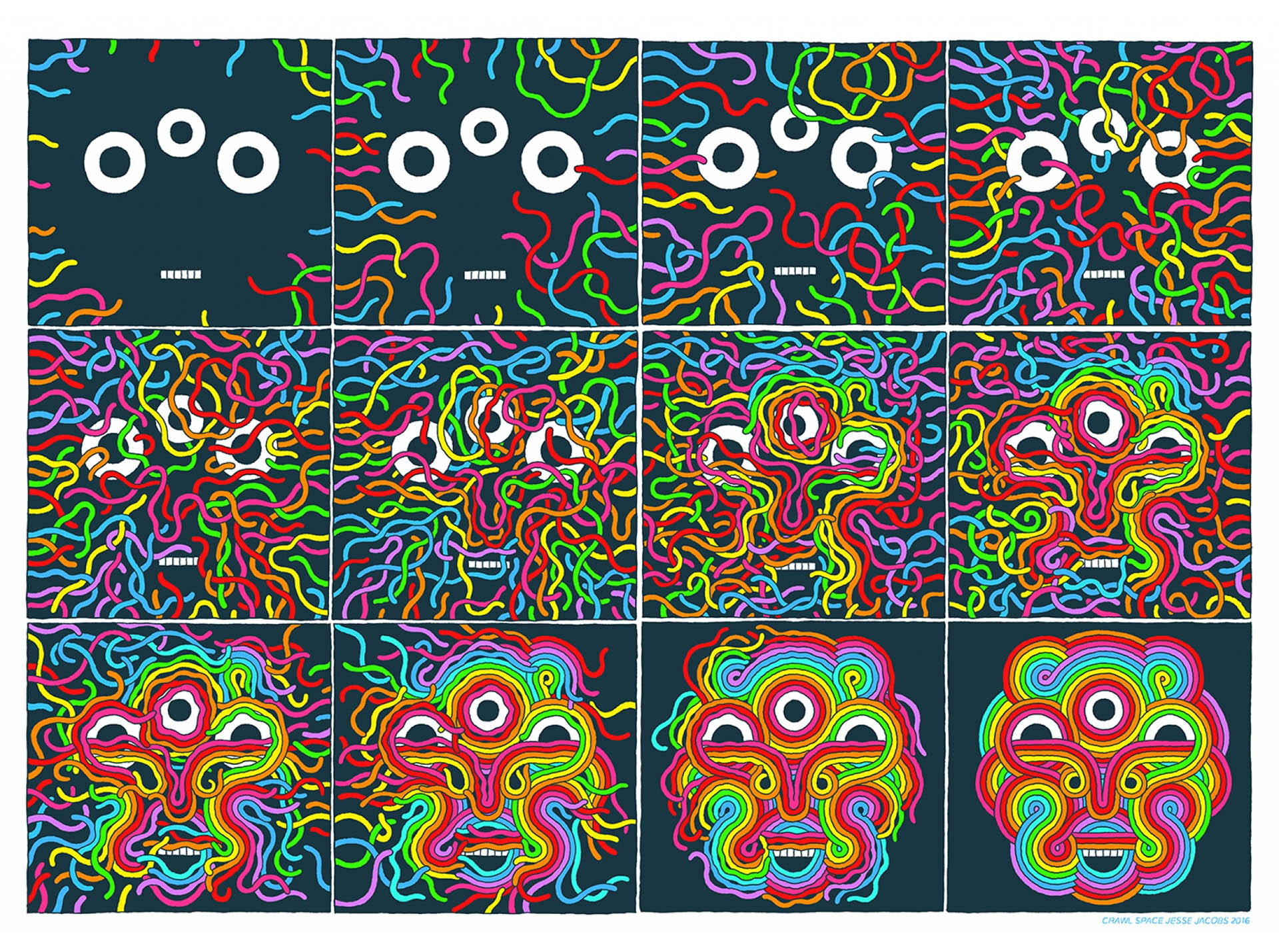 What was the biggest challenge you faced, then?

Working with a team. We have a very small team: myself, two programmers and a musician. I created all the art, animations, and level design. I can be pretty controlling about creative choices. I’ve grown accustomed to working alone, on comics, where all the decisions are my own, and I really had to adapt and learn to work in a creative way within a group — allowing the programmers to inform the art, and vice versa.

We approached making Spinch in a very natural way, starting slowly, experimenting, until we developed a language we could use to work together. It took a while for us to develop a healthy and constructive way to voice and receive criticism, but making a game is such a long and in depth process that there comes a point where everyone is just done with petty bickering. Trust is a huge part of development! And we got through the bad parts without killing one another. 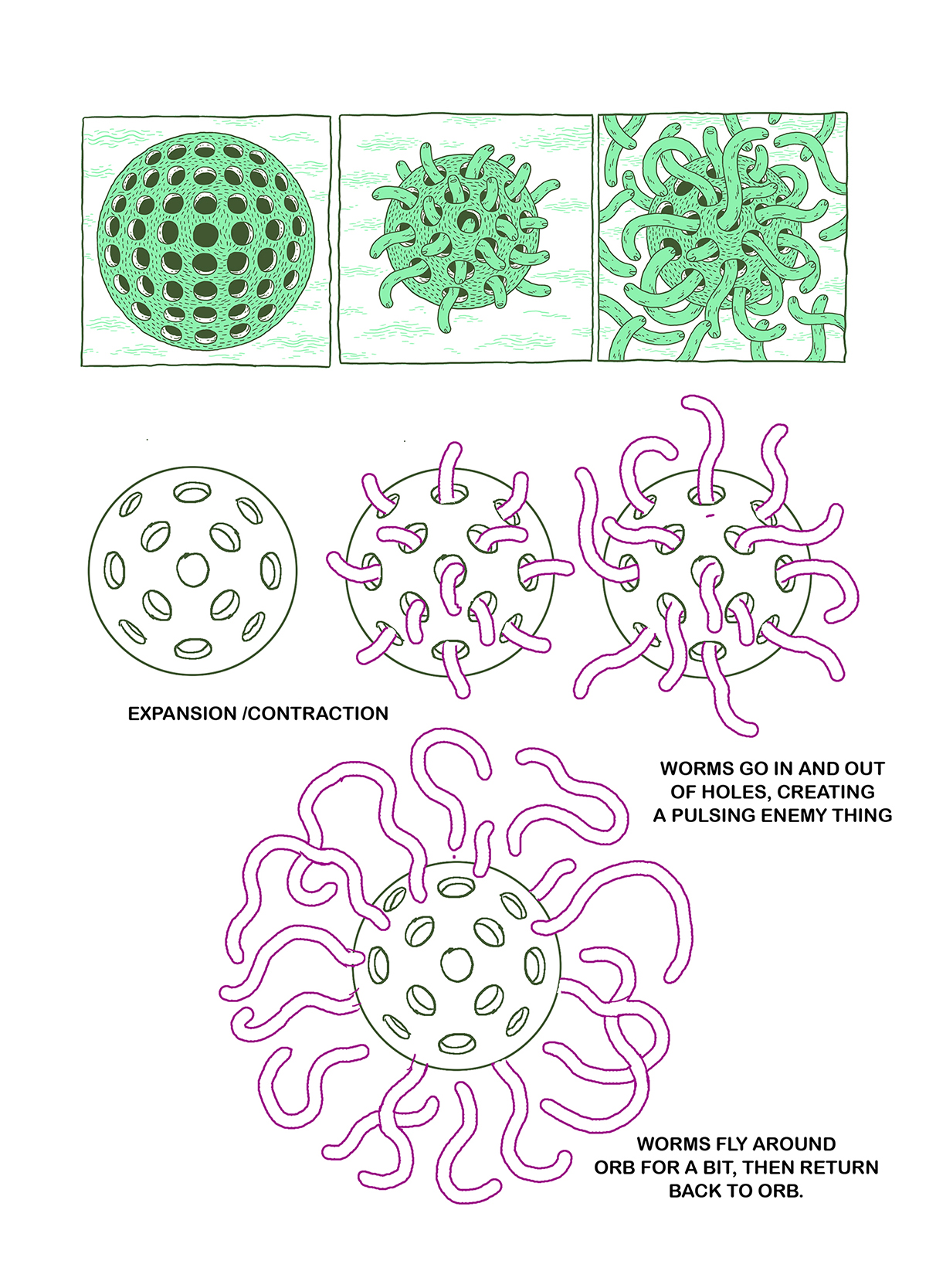 As a writer, this is so interesting: the kind of trust needed in my line of work feels completely different from the one you need. When I wrote comics, sometimes it was scary to give my script to the art team, step back and see how they would reinterpret it, with little control over the finished product…

I couldn’t imagine that way of working with comics. For me, the drawing informs the writing. My stories are so influenced by my artistic abilities. Like, if I got a script that called for a drawing of a horse, I’d be screwed. 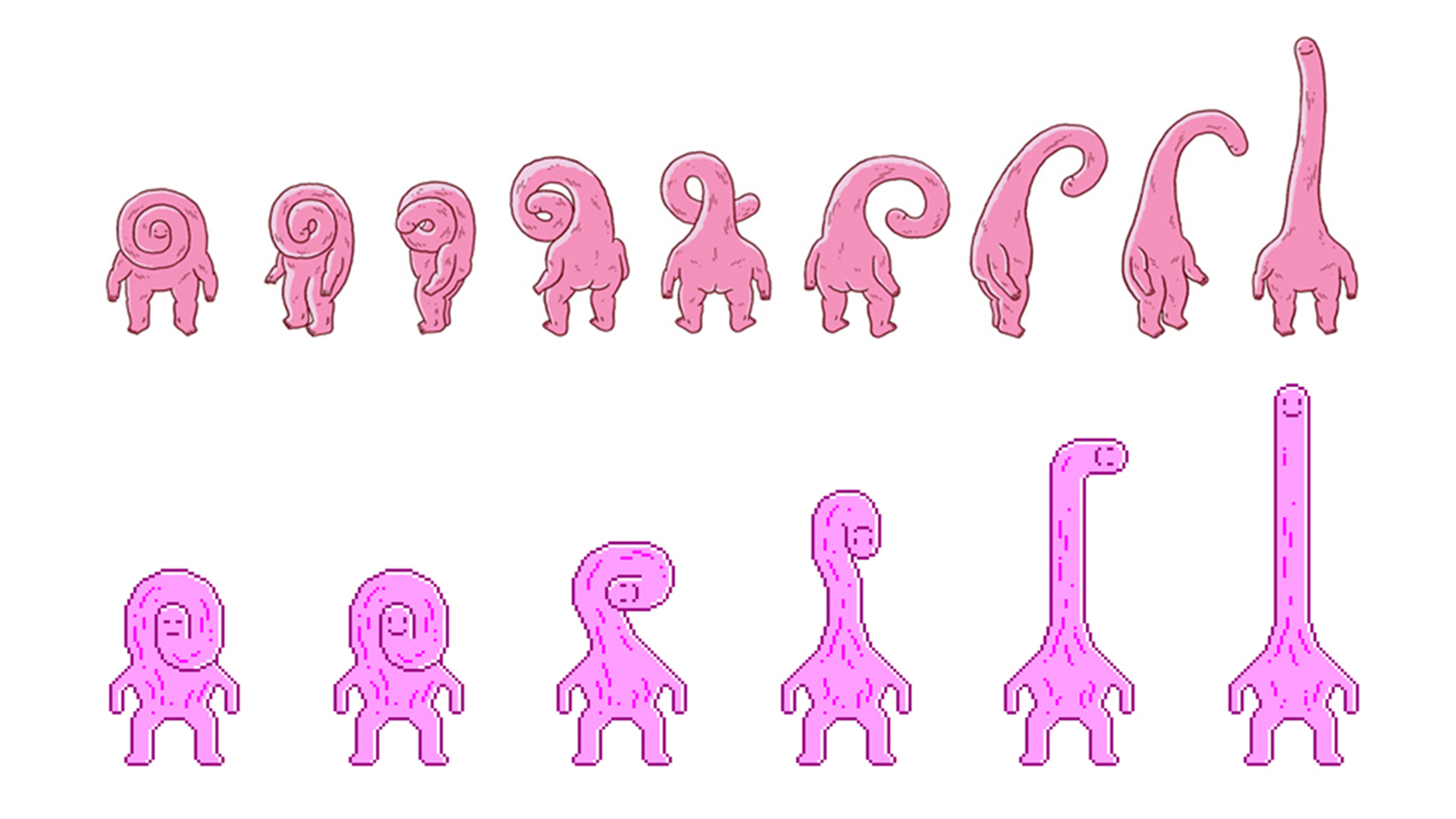 Oh, I see, so that’s why you’re in charge of the level design as well? I’m curious about your approach! Your comics pages are always so orderly, and yet absolutely crammed with details. How do you translate that balance to a videogame? How do you make something that is both a Jesse Jacobs illustration and also a level you can play?

I tried to maintain that balance. Ultimately, the level needs to flow in a natural and intuitive way, which is really similar to comic design.

With a comic page I know what I need to convey, and as long as it is clear to the reader, I can have fun outside of that constraint. I designed levels this way. First we would create the platforms and layout, making sure it has flow. Then, I would just have fun with the aesthetic side of things. In the beginning I would often have to pull back. I’d go too far, creating a confusing atmosphere. Too busy. It’s something I had to learn years ago with comics. Sometimes less is more. Let the crammed, super detailed areas breath by balancing them with empty spaces. 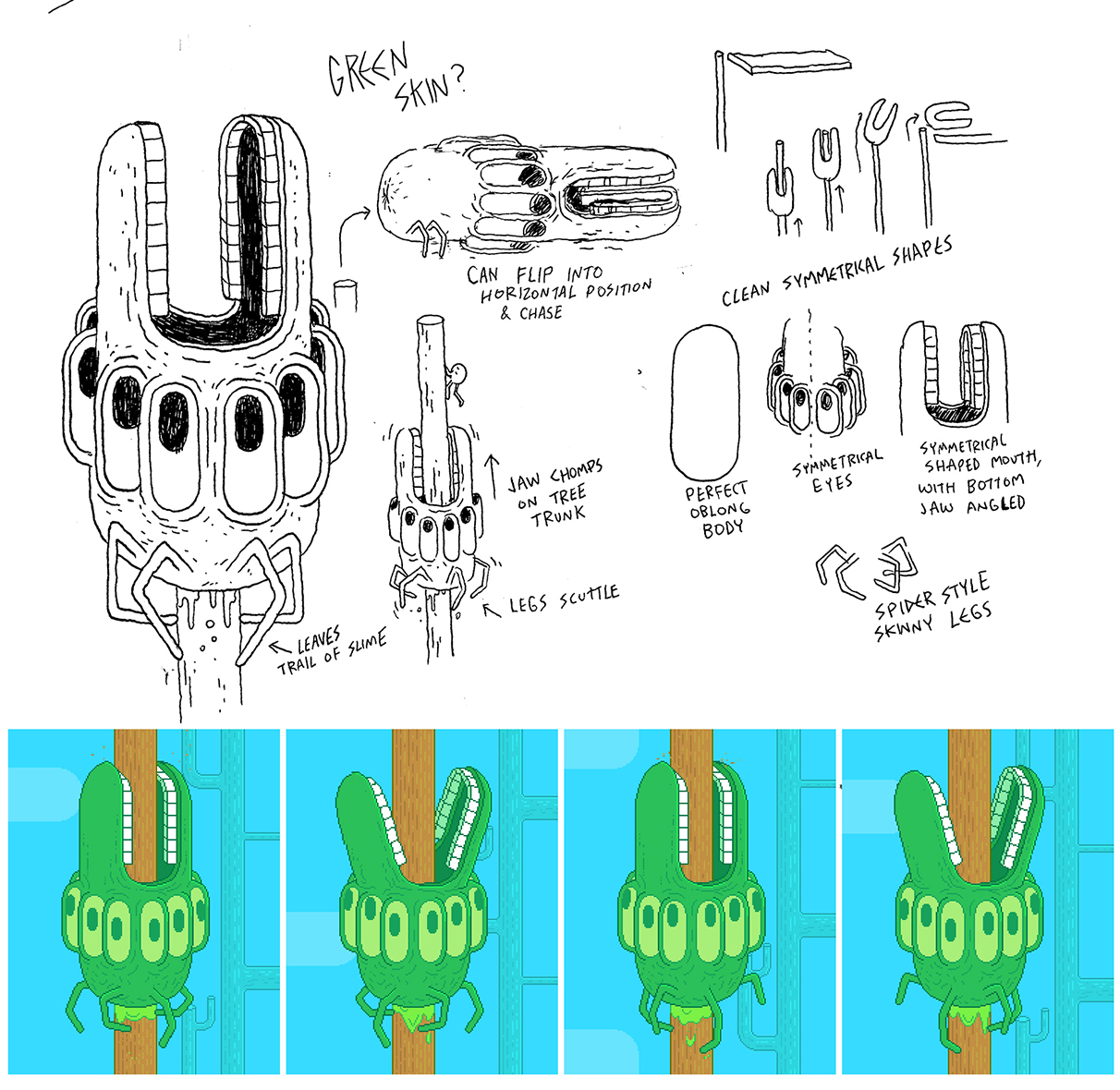 Are you doing everything directly in pixel art, or do traditional mediums also play a role during the planning/sketching phase?

It depends on the task, but when I’m creating characters I typically sketch them out first. I feel like my best ideas come to me through a sketchbook. And it is good to have drawings to show the team before actually creating sprites. Getting feedback about issues I may not have considered.

Plus, it’s just nice to get away from a computer screen and make stuff IRL. I had never spent as much time in front of a screen as I have making Spinch.

My whole life is screens. 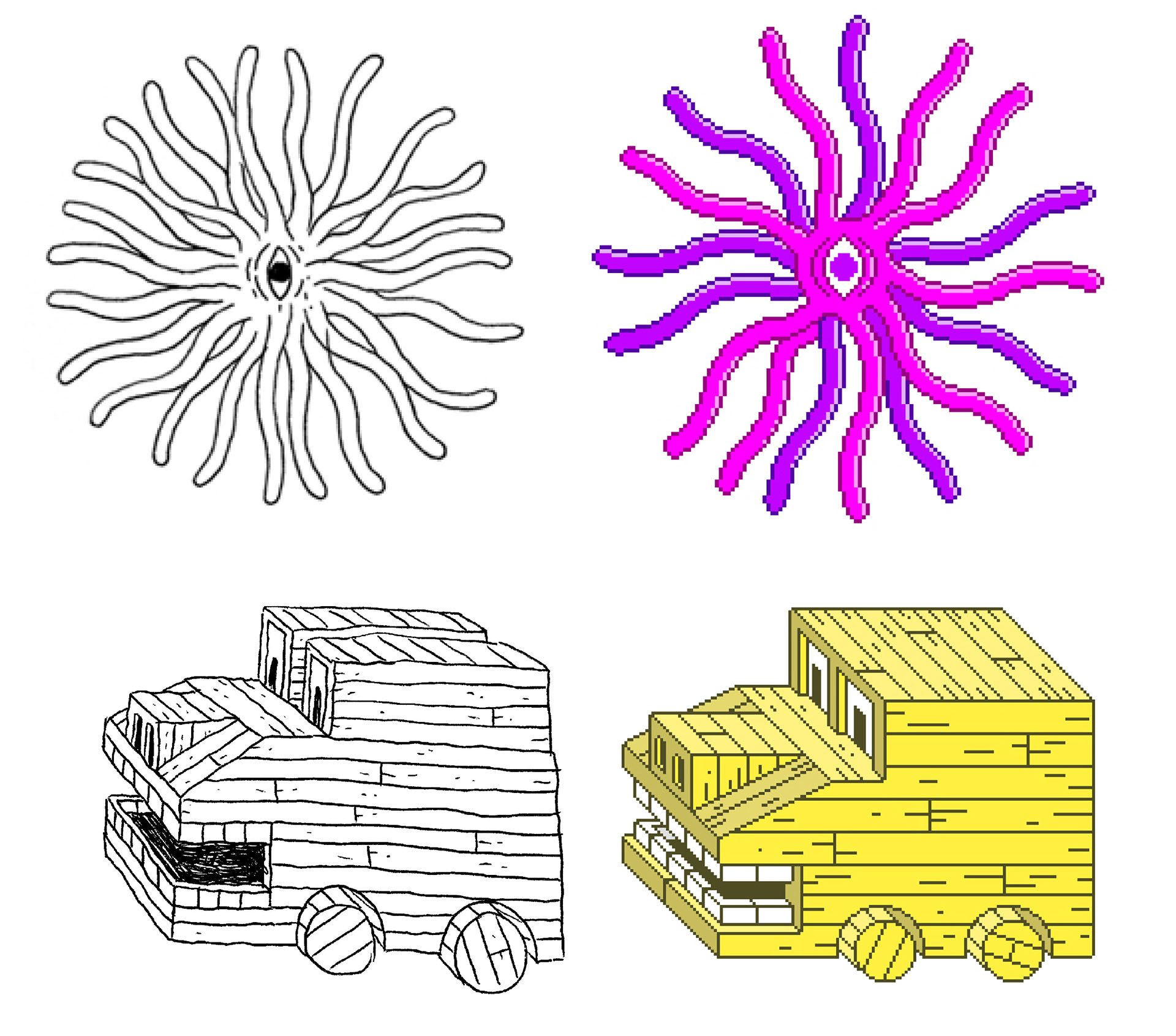 I can look at the above sprites and immediately recognise your art style, because I read your comics. But what about non-comics readers? Is Spinch getting more attention from the games or the comics press? I often get the impression that comics and games are two separate bubbles, even if we are mostly doing the same things…

I agree with you, comics and games are separate bubbles. When I started this project I just assumed there would be a huge crossover, and everyone who liked my comics would be interested in Spinch… But Spinch has mostly gotten attention from the games press. A lot of my comics fans are really pumped, but I’ve also heard from people who were a little disappointed, like the wish I’d just focus on more comics. I love making comics, but couldn’t imagine limiting my creative output to only that.

I feel you. That’s why I’m writing about comics on a games site.

The interview has been slightly edited for clarity. Spinch is being developed by Queen Bee games and published by Akupara Games, and doesn’t have a release date yet – but you can look at itsSteam page with longing.