Everyone loves a good action game. It’s the driving force behind so many of our favourite PC games, but only a few can lay claim to being the best action games of all time. That’s why we’ve compiled this list – to sort the pulled punches from the bestest biffs that PC has to offer. Whether it’s the joy of pulling off a perfect combo, riding the wave of an explosive set-piece or the hair-raising thrill of dodging enemy attacks in slow-motion that gets you going, there’s an action game here for you.

As usual, we’re keeping our definition of ‘action’ fairly broad, but there are a few hard and fast rules we’re sticking to here. We’re not including any FPS games in this list, but third-person shooters are fair game, as are RPGs. You won’t find any platformers in here, though, or any Metroidvanias, as we already have dedicated lists for both of those.

We’ve also focused on action games that we’d recommend you still play today. Indeed, in this particular iteration of our best action games list, you’ll find that several entries are for games that have been released in the last five years. That’s partly because a lot of action games don’t tend to age very well, but the key thing we’re looking for is how they feel under your fingers and thumbs. A great action game, after all, isn’t just about looking handsome; it’s about having controls and systems that are just as fun to play today as they were when they first came out.

Don’t see your favourite game on the list? Tell us about it in the comments below, and maybe you’ll convince others – and us – to give it a go. Alternatively, if you’re looking for a completely different kind of game, then check out our list of the best PC games to play right now. There might be a few action games on the list, but there are lots of other genres represented as well.

There are plenty of great action games to be found on PC, but we’ve selected 25 of the best below. We’ve also split our best action game list across multiple pages for ease of navigation, and you’ll find the page links at the bottom of each page. 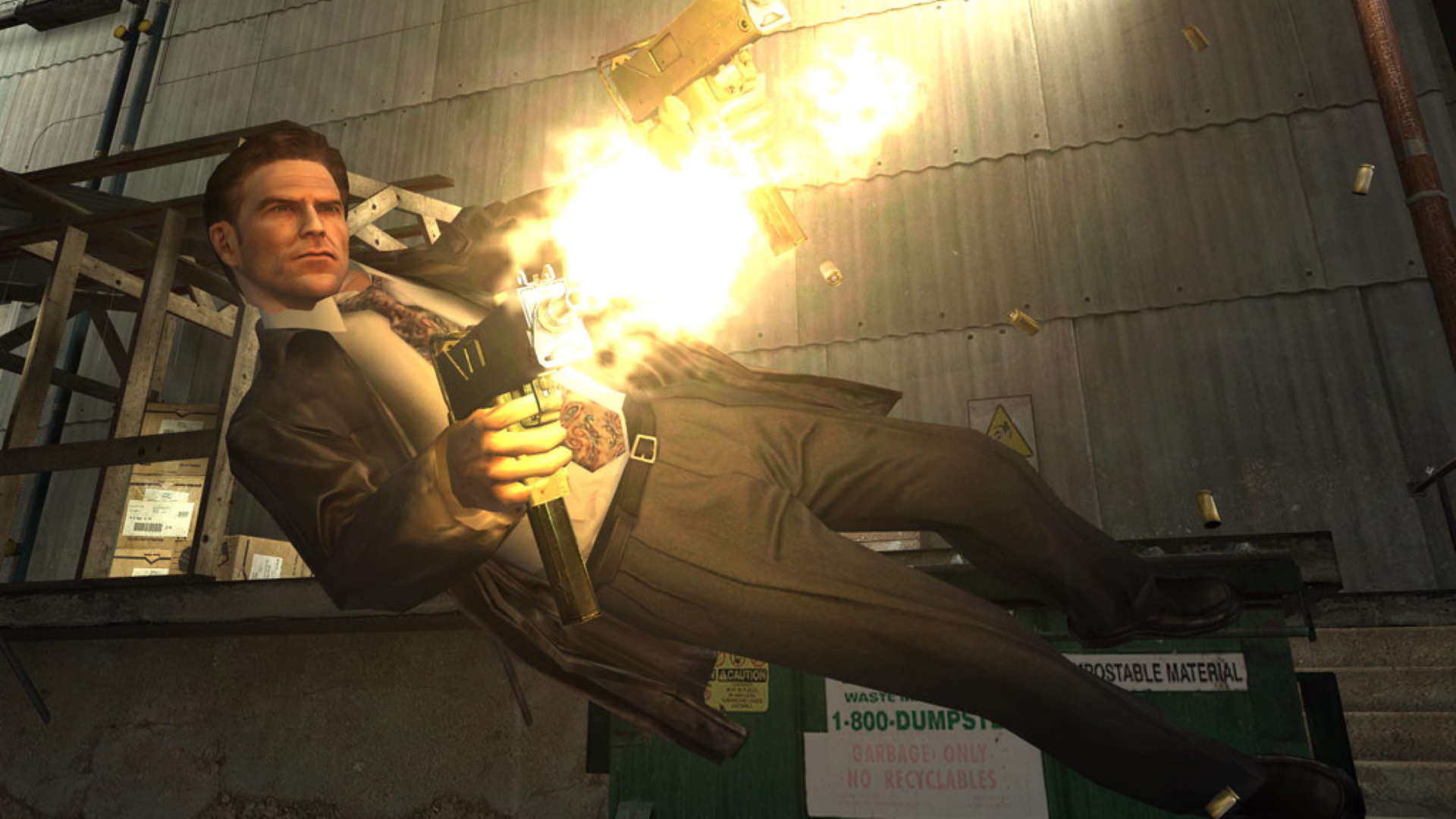 You might think that Max Payne’s superpower is being able to slip into slow-motion, but really it’s his ability to repeatedly leap onto his sides without bruising his shoulders or jabbing the house keys in his pocket into his thigh. In any case, it’s these moves combined that make Max Payne a great action game. You’ll leap around corners, shift into slow motion as you sail through the air, and unload akimbo pistols into one mobster after another on the rain-soaked streets of New York.

The first Max Payne let you pull off these stunts first, but it’s Max Payne 2 we’d suggest you return to today. The first game is visually dated and lumbered with regrettable hallucinated platforming sequences, while the sequel still looks decent, is a tight six hours of leaping and blasting, and has the same dark comedy and purple prose. It also added a new technological marvel between the first game in 2001 and this 2003 successor: physics. It’s old hat now, but spraying bullets everywhere is undeniably more satisfying – and more reminiscent of the John Woo movies which inspired it – when there are cardboard boxes and old buckets to send spilling from shelves.

What else should I be playing: John Woo’s Stranglehold was recently re-released on GOG, and is a similar third-person action game with slow-motion dives alongside table slides and flocks of doves. 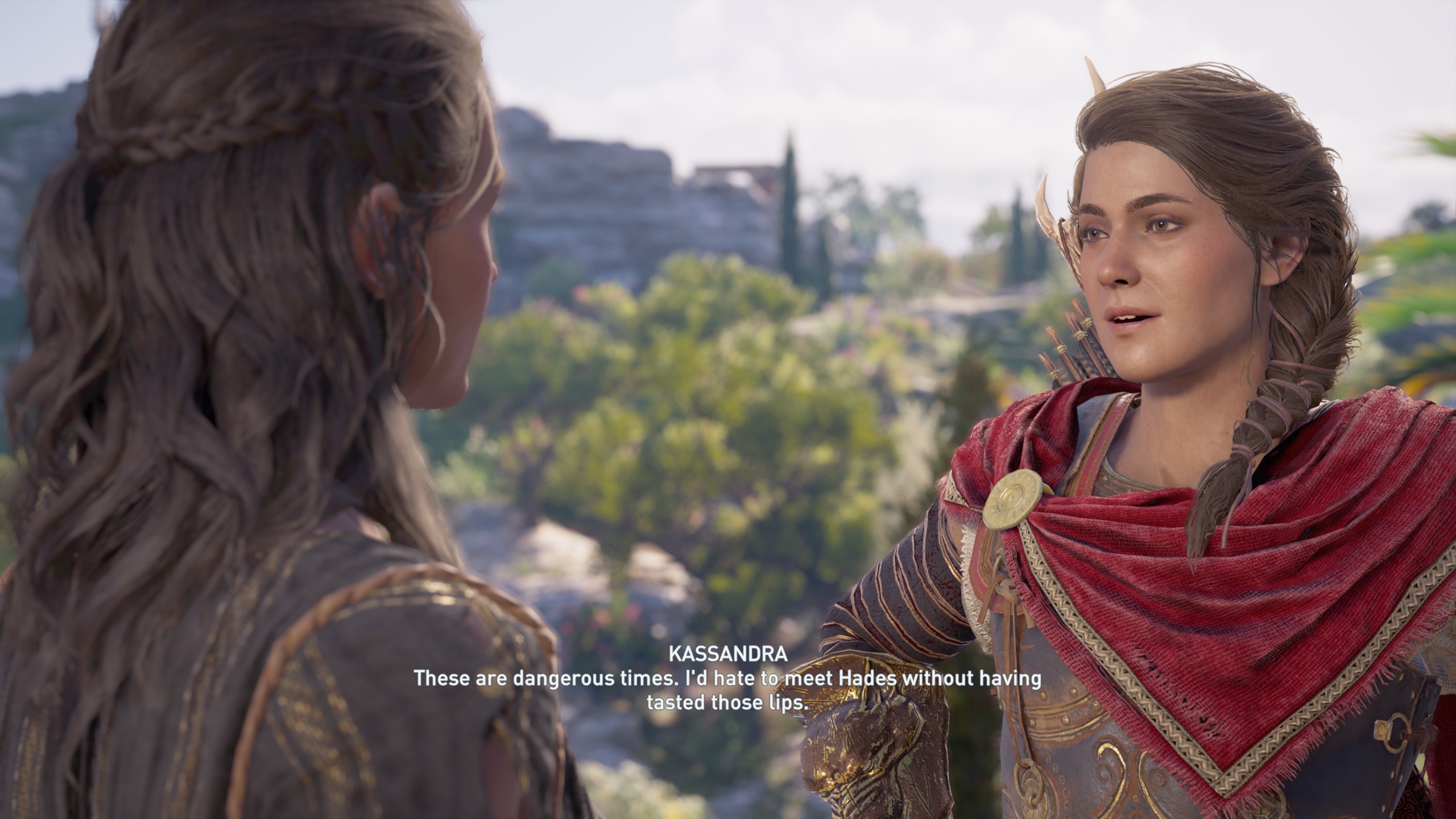 Assassin’s Creed had got a bit samey over the years, so when the series got a bit of a reboot with Assassin’s Creed: Oranges, everyone felt invigorated. Ubisoft took the new template and improved upon it for Assassin’s Creed Odyssey, the story of a lone but preternaturally badass mercenary having jollies around Ancient Greece.

The ongoing AC lore about computer-wizard-aliens technically and sinister cults is, technically, still going, but who cares when you can sail a boat across the Aegean, meet the minotaur, kill the minotaur, and then head to Olympia for lunch. The breadth of the world in Odyssey is extraordinary. Ubisoft managed to recreate an entire country. So many treasures from Greece have been lost, but even the least Classics-y nerd will be impressed by the chryselephantine statue of Zeus, or the giant Athena overlooking Athens from the acropolis.

Importantly, Odyssey continued the trend of harder combat, gear mattering more and stealth being your best option, which makes it feel less like busy work and more like an actual challenge. Most importantly, Kassandra, the female player character, is the best thing to happen to games for actual years.

Where can I buy it: Steam, Humble, UPlay

What else should I be playing: Odyssey is building on the legacy given it by a lot of games, but for our money you’d be best off with Assassin’s Creed IV: Black Flag for the high seas combat and similar, swashbuckling vibe. The whole of Odyssey’s playstyle also owes pretty much everything to Assassin’s Creed: Oranges, so definitely head to Egypt for a spell, too. If you’re more in the mood for ass kicking and name taking as a strong independent woman, go for the Tomb Raider reboot games – one of which is on this very list. 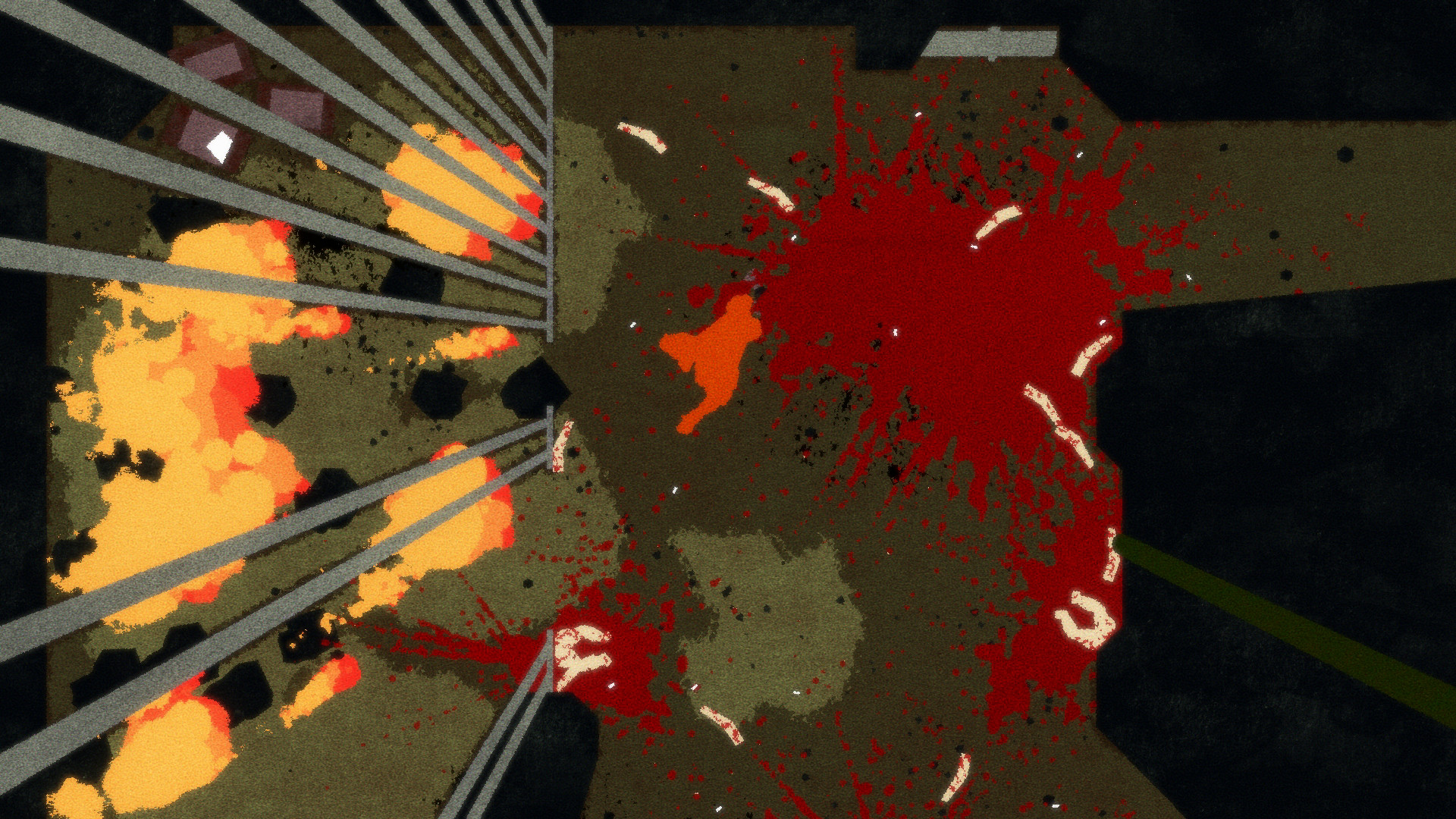 There are some amongst you who will dispute that Ape Out is an action game, and to those I say, “Try saying that to a gorilla punching armed guards to death!” You couldn’t of course, because you’d only have time to open your mouth before it knuckled over and exploded you with its fists, too. Even if you could speak, gorillas famously do not understand the English language.

Ape Out is absolutely an action game, with the clarity of purpose and perfect design of a silverbacks noble fist. Played top down, Ape Out is vaguely reminiscent of other Devolver Digital favourite Hotline Miami, except instead of a man in an animal mask you are a giant furious ball of furry hominid, and instead of guns and bats and that you use your furious hominid limbs.

As the titular Ape who is trying to get Out, you speed through different floors of buildings (a science lab, a military base, an office block) to make your escape. The world is painted in vivid blocks of expressive colour: angry reds, cold unforgiving blues, bruised purples. Soldiers with different weapons try to stop you, but cannot. They have body armour, shotguns and explosives. But you are an ape.

Your controls are move, hit, and grab, so while you technically don’t have any weapons, you also very much do. You can hold on to a man with a machine gun and aim him at your buddies! A lad with dynamite is basically a grenade the size of a person! All this is without even mentioning the soundtrack, a masterpiece of procedural jazz drumming that matches pace with your orgy or destruction. Ape Out is so much one whole, perfect thing that isn’t like playing a game so much as it is like having a profoundly beautiful, violent, synaesthetic thought.

What else should I be playing: As mentioned, the top down blood splattering is very Hotline Miami. If you’re more swayed by the fusion of punching and music, check out “rhythm violence” game Thumper. 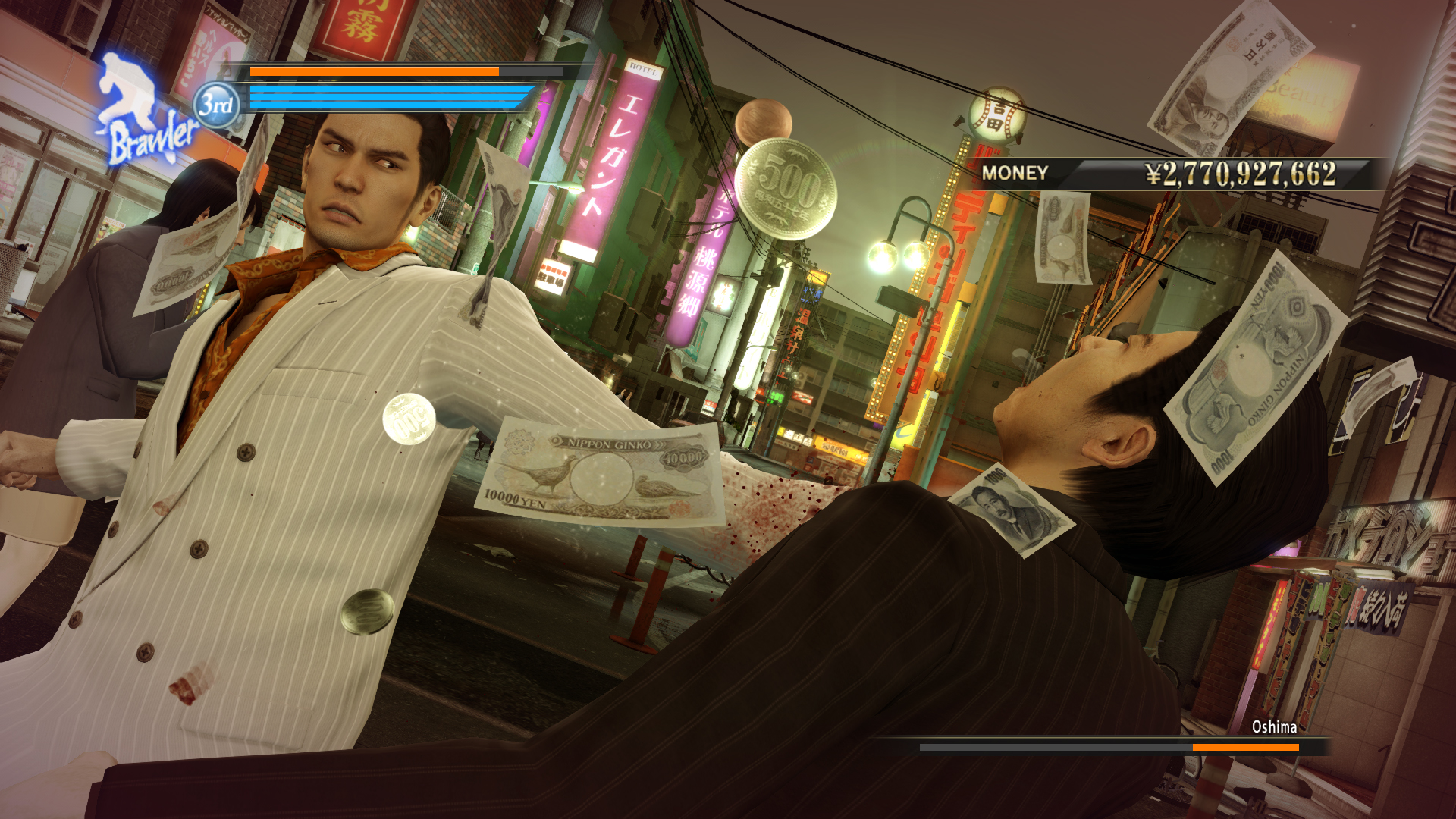 Sega’s open-world brawler RPG series about the Tokyo underworld finally branched out onto PC in 2018, and its prequel Yakuza 0 remains both the best entry in the series, and the best starting-point for wannabe crime dads. Its two protagonists Kiryu and Majima are quite different in tone and style, but they’re both absolutely delightful. What good boys, and what excellent thugs.

Yakuza 0 has something for everyone. It’s like a smaller scale GTA set in the backstreets of Tokyo (its beautifully detailed city of Kamurocho is modeled after Tokyo’s Kabukicho entertainment district) where you can thunk punks with your fists, bicycles, baseball bats or whatever manner of destructible street furniture you can lay your hands on, while also busting out dance moves, play arcade mini-games, help a floundering dominatrix believe in herself, befriend Michael Jackson, hire a chicken to be a property manager at your real estate business, and loads more. It’s melodrama in video game form, and it fully commits to turning you into both Japan’s meanest, toughest mob man and its nicest uncle.

It’s just such a lovely place to be, too. It’s warm and funny yet still an interesting crime drama, and its cities are chock full of diversions that make them feel like real, living places. Outside of its raucous brawls, its action is pretty low-key compared to other games on this list, including designer Toshihiro Nagoshi’s other big work, Binary Domain (which we’ve put next door to this entry), but it’s also something we’ll never get bored of. More please.

What else should I be playing: If you liked this, you’re going to love Yakuza Kiwami (a remake of the very first Yakuza game) and Yakuza Kiwami 2 (which, you guessed it, is a remake of Yakuza 2). 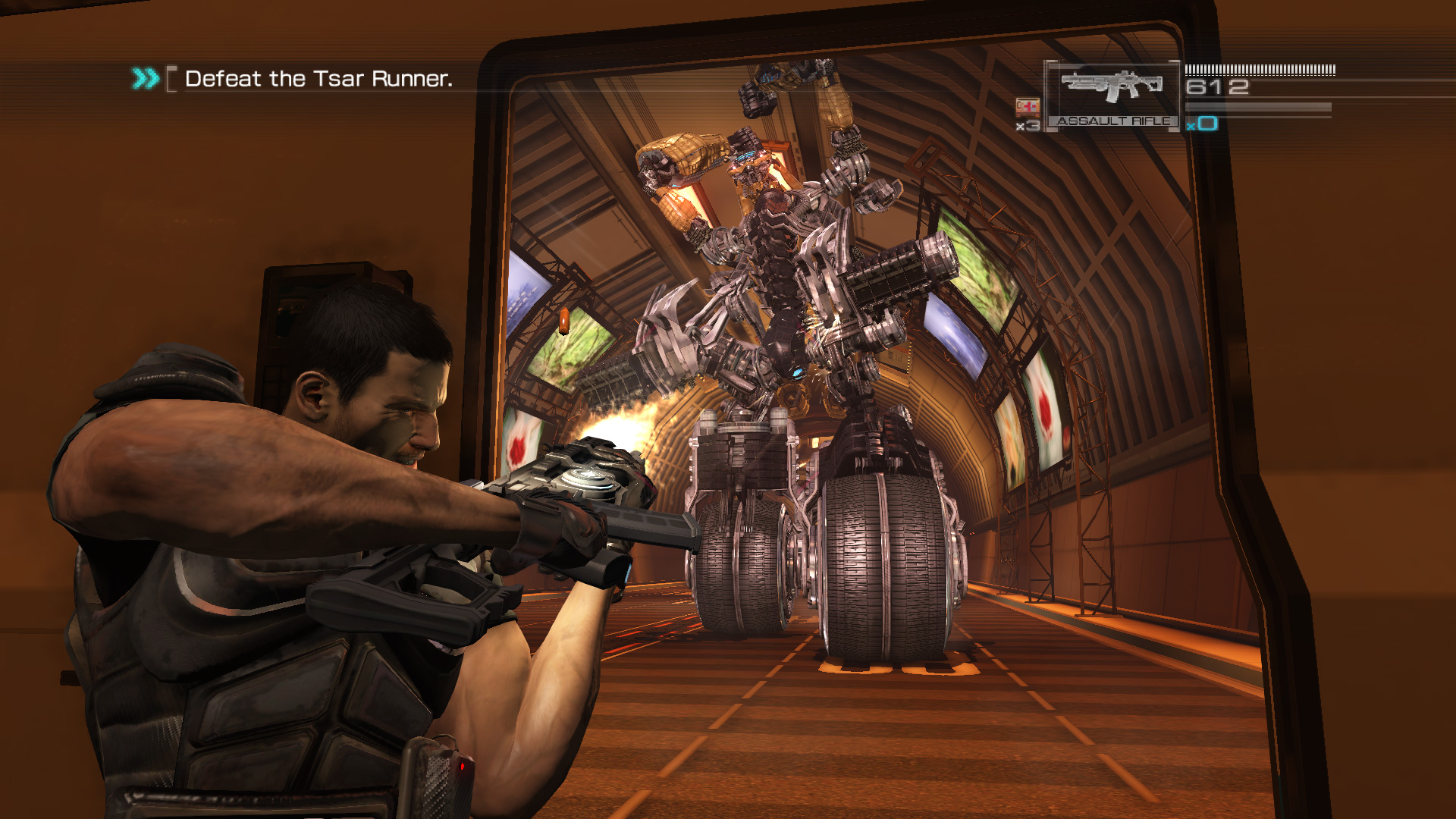 On paper, this doesn’t sound great. It’s called Binary Domain, for starters, features a hero whose design brief was ‘draw a man with muscles’ and attempts a misjudged voice system that sees you bellowing ignored orders at belligerent companions like an angry dog-owner in the park. But! Binary Domain might be the greatest 7/10 of all time. A 7/10 so potent, that it becomes a 9/10, purely on the sheer force of its seven-out-of-ten-ness.

Binary Domain is what happened when the Yakuza team attempted to muscle in on the cover shooter craze of the early 2010s: leaving behind Kamurocho, albeit for a different, futuristic Tokyo, and flooding it with hostile robots. And giant robot animals. And a friendly French robot who wears a trendy scarf. It feels like a cynical bid for a western audience, but one that can’t stop the teams bizarro energy bubbling up.

And if sticky cover mechanics and dubious AI allies speak to the team’s lack of experience in the genre, they get the most important bit right: shooting things feels great. This is down to the nature of the enemy: armoured robots that shatter like ceramics as you chew through their outer layers and eventually sever limbs and heads. A decapitated robot will go haywire and blast its pals in the perfect payoff for your accuracy; legless droids pull themselves along the floor, creating hectic action where the damn things never stop coming.

What else should I be playing: For more goofy action heroes with hearts of gold, any Yakuza will do the trick, but for good robot-smashing shooting, Gears 5 has some very satisfying chassis explosions.