Mirage, the so-called Holographic Trickster of Apex Legends characters, is perhaps the most satisfying Legend to play as when things go right. When you pull off that perfectly timed bamboozle or distraction with your holographic decoys… Man, it feels great. What’s more, there’s a fair amount more utility to Mirage’s abilities than you might think. Our Apex Legends Mirage guide will show you how to make the most of Mirage’s abilities, with a multitude of practical tips and strategies on each one.

In the following sections we’ll go through Mirage’s general playstyle, strengths and weaknesses, before delving into detailed information regarding hitbox sizes and each of his holographic abilities. To skip to any particular section, simply click on its corresponding link below.

Mirage is the one-trick-pony-est of one-trick-ponies. All his abilities – his Passive, his Tactical, and his Ultimate – revolve around the use of holographic decoys to confuse and distract enemy players. For this reason, his abilities are often considered to be the weakest of all the characters in Apex Legends, because they lack utility and versatility; and also because, as time goes on, players learn to recognise Mirage’s decoys and you can no longer rely on your enemies being fooled every time.

So where’s the good news? Well, there are a handful of things that the average player doesn’t know or fully understand about Mirage’s capabilities, and this guide will teach you how to use them to your advantage. We’ll go into this in more detail later, but I tend to play Mirage much more aggressively than most characters. Upon first glance his abilities seem very defence- and self-oriented, designed to get you (and only you) out of sticky situations. And while this is true, Mirage has hidden utility when played aggressively, much like you would play a Wraith or Pathfinder, in fact. 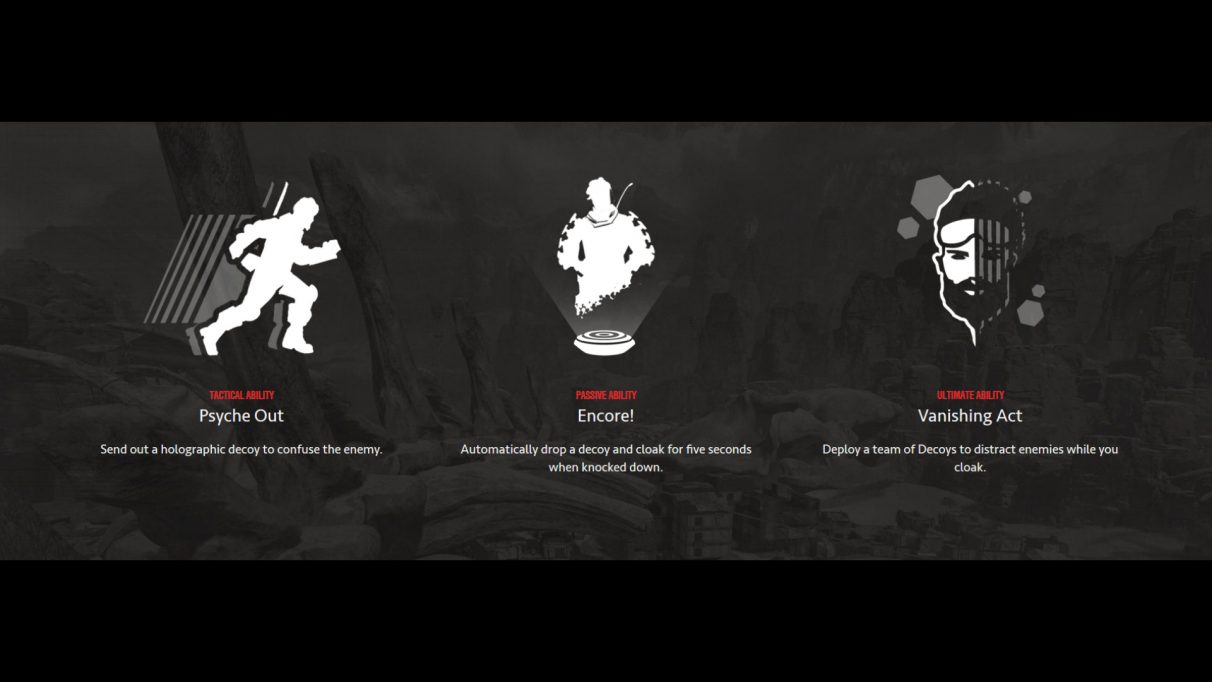 As with all other Apex Legends characters, Mirage has access to three abilities: a Passive, which you benefit from without having to do anything; a Tactical, an activatable ability on short cooldown; and an Ultimate, which is (theoretically) your most powerful activatable ability, which must be charged over time before it can be used. Much like Caustic, Mirage’s abilities all make use of the same mechanic: that of generating holographic decoys to bamboozle the enemy. Let’s take a closer look at how each ability works. 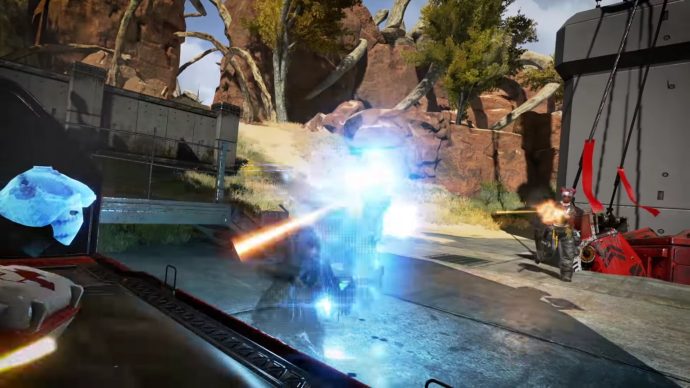 I’m just gonna come out and say it: Mirage’s Passive is the worst ability in Apex Legends. It’s easy enough to understand; if you’re knocked, then a decoy is generated in your place, while you cloak for several seconds. It’s meant to give you a little more time and a bit of a safety net against being finished off by enemies. But there are several big problems with this ability, and since there’s very little to speak of regarding how to use this ability properly, I will instead explain why I think Mirage’s Passive is in serious need of alteration.

First: your decoy is not at all convincing, because he doesn’t act like a knocked down player. Instead, he goes through this dramatic death animation that is unique to this ability, so everyone always knows exactly what is happening when they see it.

Second: you aren’t entirely invisible while cloaked. It’s fairly easy to see your outline shuffling away, and unlike, say, Wraith‘s Tactical, you can be shot while this is active. So it really doesn’t save you from anything.

Third: who in the hell wants an ability that only benefits you if you get knocked down? I’d prefer not to get knocked in the first place, if I’m honest. 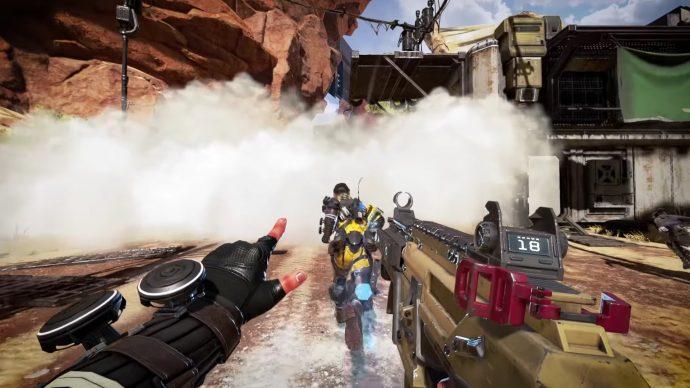 Psyche Out is a more useful ability, and key to playing as Mirage is to use it as often as you can. Seriously, don’t even let it off cooldown for any stretch of time. Simply put, it’s an ability which spawns a decoy and sends it running forward in a straight line for a short time. The intention here is clear: to confuse and distract the enemy. But there’s a little more to it than that.

If an enemy shoots your decoy, then you will be alerted to their exact whereabouts via a Ping-like notification on your HUD. This makes Psyche Out useful for reconnaissance purposes, as you can send a decoy out before your team heads into a building or compound, to see if there are any threats present. You can also use it to great effect alongside Bangalore‘s Smoke or Caustic‘s Nox Gas, because your decoy have their own footsteps audio just like a player, and so it can easily panic an enemy, perhaps even interrupting their heal or revive inside the Smoke.

There’s a pretty short cooldown on Mirage’s Tactical so you shouldn’t be afraid to use it multiple times in a fight. And for those complaining that it’s easy to spot the decoys by their movements and actions: the point isn’t to distract an enemy for seconds on end, because an experienced player will never be fooled that long anyway. But if you distract or confuse them even for just a quarter of a second, or long enough for them to shoot, then you will benefit from this ability. 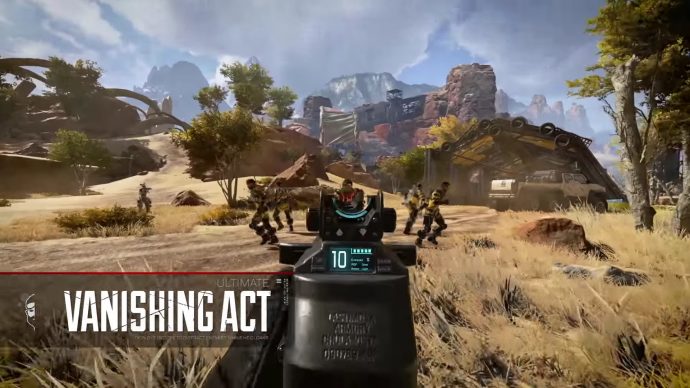 Vanishing Act is a multifaceted ability, and there are two main ways you can use it. Using Mirage’s Ultimate will spawn 5 decoys in a star formation around you, while cloaking you for several seconds. On the face of it, this seems like a defence-only strategy: and it’s certainly true that Vanishing Act can be effectively used as a panic button. But many more experienced players prefer to use Vanishing Act in a different manner than intended.

As discussed, while cloaked you are not fully invisible; but you can still use this ability to great effect in order to initiate a fight against an enemy team, because they won’t specifically be looking for a cloaked figure, so often you won’t be spotted as long as you are smart about positioning and movement. You can’t use weapons, items, or throwables while cloaked, but you can still use that time to get into an excellent position for a fight, perhaps flanking the enemy while your teammates approach from a different direction. 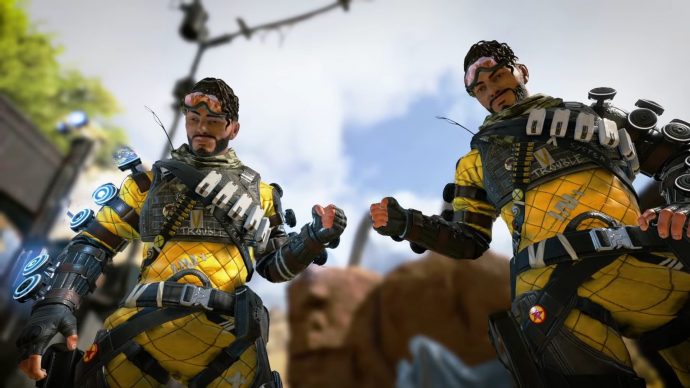 And that’s all we’ve got for now on the Holographic Trickster that is Mirage in Apex Legends. Hopefully you’ve learnt a thing or two about how you can use (or augment) his abilities. He may not be the strongest character at the moment, but he’s certainly able to hold his own in a teamfight… and who knows what the future might bring?