AOC make great gaming monitors. You might even say they make some of the very best gaming monitors around. Indeed, their excellent AOC 24G2U is currently our RPS Rig-approved gaming monitor and one of the best budget screens you can buy today. Did you also know, though, that they now make their own AGON-branded peripherals? I certainly didn’t, but if my brief hands on with their upcoming AGON-branded keyboard and mouse is anything to go by, they could be on to another set of winners. After all, what’s the point of having a bunch of LEDs on the back of your monitor if you can’t have matching rainbow patterns across the rest of your PC?

Currently due to land sometime in July 2020, AOC’s AGON mouse and keyboard are actually just one set of peripherals they’re releasing this year, as they’re also going to be launching another mouse and keyboard set that’s geared toward their entry-level AOC Gaming line at the same time. These will be quite a bit cheaper than their AGON counterparts, with the mouse coming in at €28 as opposed to the AGON’s €50, while the keyboard is set for €70 compared to the AGON line’s €150 asking price, but I reckon that even these have the potential to bring some welcome competition to the budget end of our best gaming keyboard and best gaming mouse rankings.

Starting with the AGON kit, the AGK700 keyboard and AGM700 mouse (pictured above) look (for better or worse) every bit like your classic gaming peripherals. Decked out in the same red and black colour scheme as AOC’s AGON monitors, you can definitely tell that they’ve graduated from the same school of ‘gamer’ design as the screens they’ll be sitting in front of. The 16,000 DPI mouse adds a bit of extra flair with its big silver clicker buttons, but otherwise you’ve got a very gamery looking sniper button below its two programmable side buttons as well as lots of tiny little LEDs on the left hand side indicating which of its three on-board memory profiles you’ve got enabled. 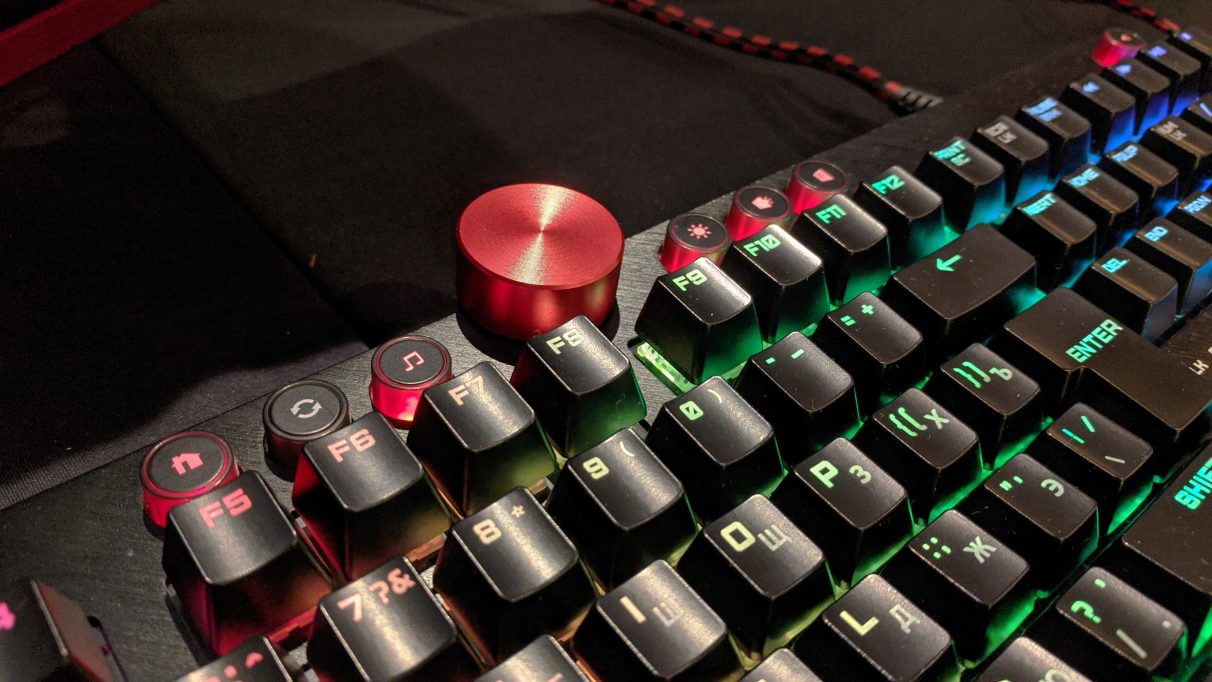 I do love a big, chunky keyboard dial…

The AGK700 keyboard, meanwhile, will come with Cherry MX Red and Blue mechanical switches and a detachable, magnetic leather wrist rest, plus 13 different function buttons. It’s still a bit ‘gamery’ for my liking, but holy moly does it have an attractive red control dial plonked right in the middle of it (above).

Using the same shade of red as AOC’s new AG353UCG monitor (the successor to their AGON AG352UCG gaming monitor, which now has a 35in, 3400×1440 resolution display with a 200Hz refresh rate and Nvidia G-Sync Ultimate support), this gorgeous, tactile dial can be used for all manner of different keyboard functions, such as turning up the volume of your speakers and adjusting the brightness of the keyboard’s LEDs. All you need to do is hit the appropriate function button beside it, and the red dial will adapt accordingly. It’s a very similar setup to Roccat’s Horde Aimo keyboard, only ten times lovelier. It’s also got five macro buttons down the left-hand side (plus a mode button for switching between its five on-board profiles) and a dedicated mute button over in the top right corner. 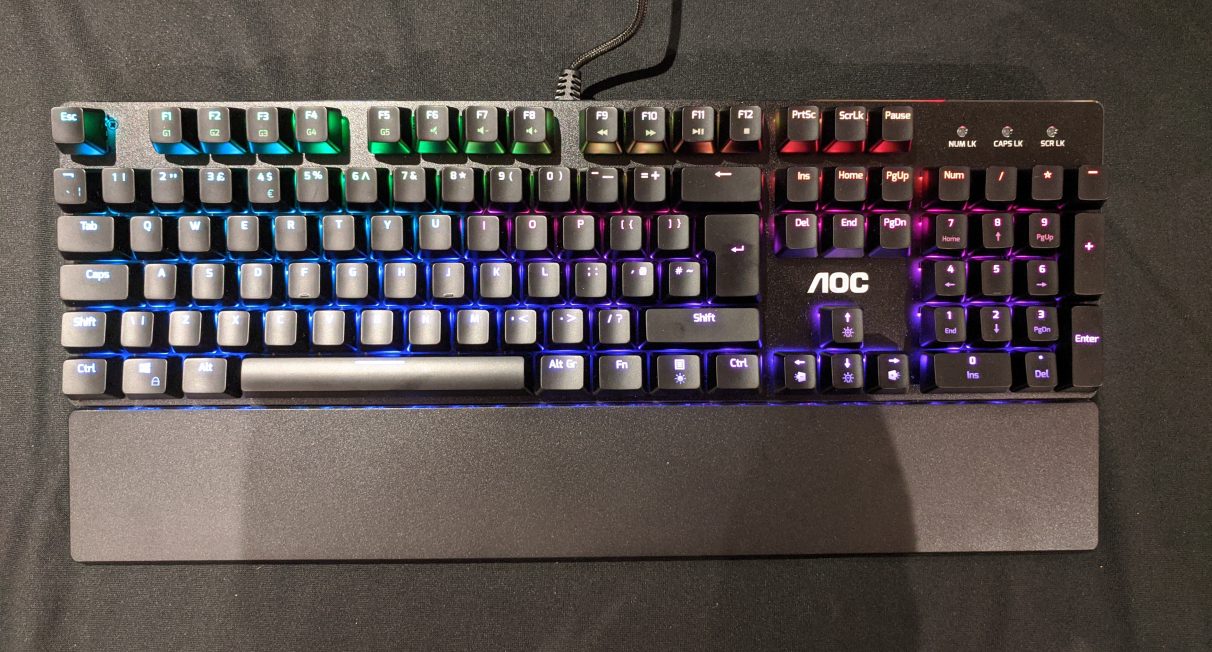 AOC’s Gaming mouse and keyboard (the latter of which is pictured above), meanwhile, are a lot simpler than their AGON counterparts, both in terms of features and their overall design. The GK500 keyboard, for example, has a pretty straightforward plastic chassis that’s a lot more compact than the AGK700. You still get five macro buttons, though, as well as a magnetic detachable wrist rest (albeit a hard plastic one rather than a soft leather job). It’s still mechanical, too, but AOC have opted for Outemu Blue switches here instead of traditional Cherry ones. Not that that should be an issue, though, as the Outemu switches I tested on the Tecware Phantom RGB still felt very clicky and responsive. Indeed, if the AGK700’s specs card wasn’t sitting right next to it during my demo session, I probably wouldn’t have been able to tell which one was Cherry and which one had the Outemu switches.

As for the GM500 mouse (pictured below), this ambidextrous clicker has a much flatter shape than the AGM500, and its highest sensitivity setting is limited to just 5000 DPI as well. That’s quite low, even for a budget mouse, but let’s be honest, unless you’ve got bionic eyes capable of detecting laser-fast mouse movements, you probably won’t be using anything much above 2000 DPI anyway. Plus, thanks to the GM500’s symmetrical design, you also get two extra buttons on the right-hand side, which is good news for the lefties out there. 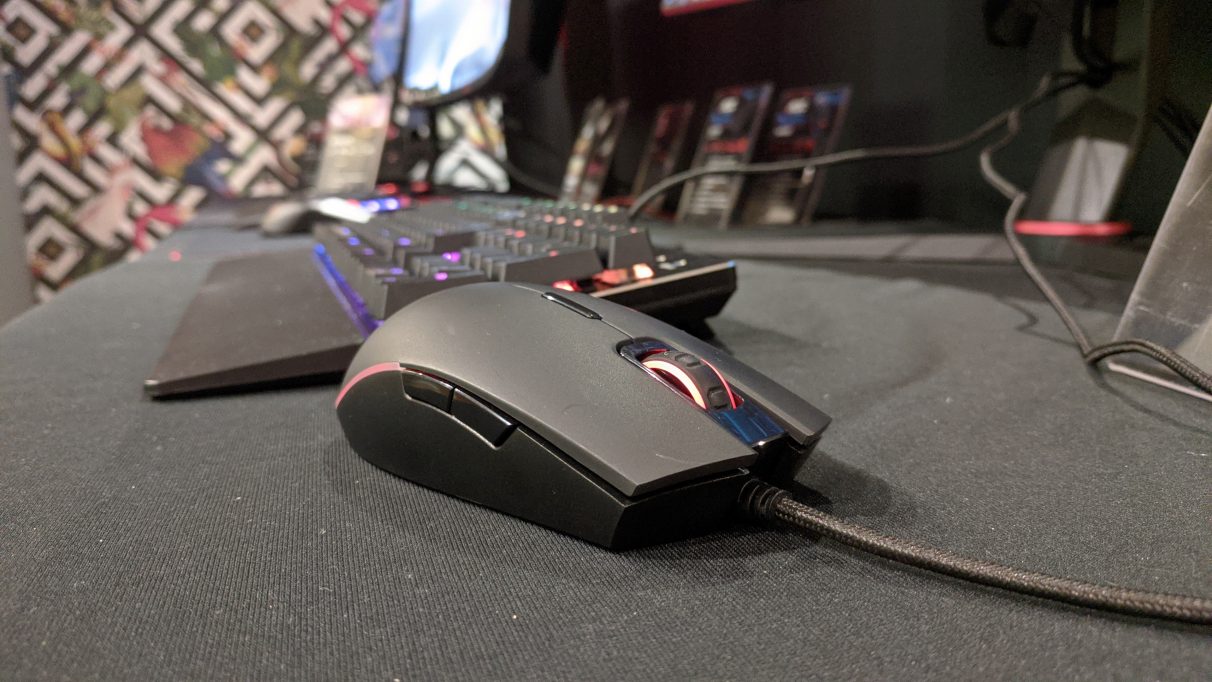 All four peripherals will be compatible with AOC’s new G-Tools software as well, which will let you customise the RGB lighting, program all of their various buttons and create on-board profiles. AOC weren’t ready to show this off just yet, but fingers crossed it won’t be a pain in the ass to use like some of the other mice and keyboard software out there.

Still, even if G-Tools doesn’t live up to expectations, what I’ve seen so far of AOC’s gaming peripherals looks to be a promising debut for the company, and I’ll be intrigued to see how they stack up to the competition come release time later this year.