Revenant is already looking to be one of the strongest characters we’ve yet seen in Apex Legends. With a scary skillset that lends itself to a very aggressive playstyle, it’s not just the novelty of a new Legend that’s making the entire Apex playerbase want to play as Revenant every match.

Our Apex Legends Revenant guide is packed full of useful info on his playstyle, his abilities, and even his hitbox – not to mention a multitude of practical top tips on securing the win as this terrifying Synthetic Nightmare.

Take a look at our Apex Legends characters guide for full details and opinions on all of the characters together. If you’re after a focused guide on a different Legend, check out the table below!

As with every other Apex Legends character, we’ve got a fair amount to talk about with Revenant, the latest Legend to grace the Apex Games and the World’s Edge arena. Feel free to use the links below to skip ahead to a particular section.

The first thing to understand about Revenant is that if you’re not prepared to play aggressively, then you’re going to waste his skills. His Tactical and Ultimate, as you’ll see, are both time-sensitive and require you to really hunt down and pressure enemies in order to capitalise on your advantage. So don’t waste any time dilly-dallying – and the same goes for allies of a Revenant. If he pops down his Totem or throws a Silence, that’s the very second you need to start pushing the enemy.

Much like Octane, Revenant is a highly mobile character in firefights, but on a smaller scale. His Passive allows you to crouch-strafe at a much higher speed while firing than any other Legend can hope to achieve. And with the ability to climb higher than other Legends and reach unexpected places, a good Revenant can also become a very effective flanker.

On paper, his major downside is the Low Profile perk, which increases the damage he takes by 5%. But the real danger with Revenant is improper use of his abilities. This skillset is filled with game-changers, but they’re easy to misuse or waste if you (and your team) are not prepared. 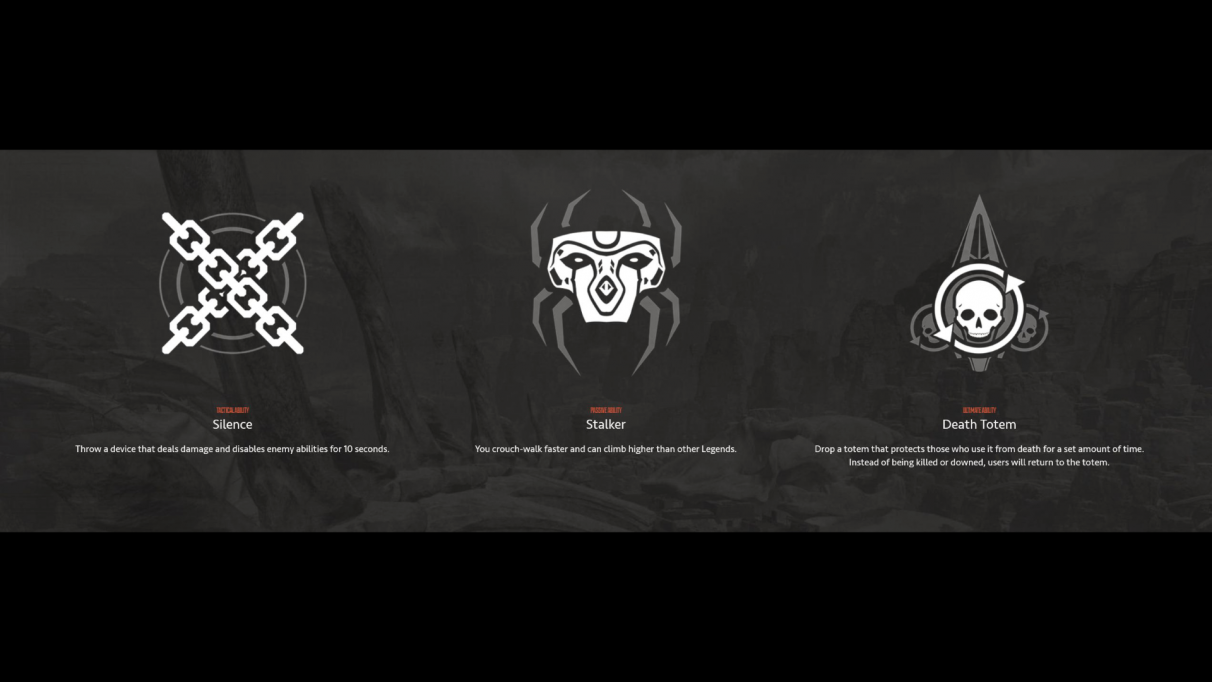 Now let’s take a closer look at Revenant’s three abilities, and why I consider him to be one of the strongest Legends available in Apex Legends so far.

The most straightforward and uninteresting of Revenant’s abilities is also his greatest asset. Stalker ramps up Revenant’s crouch-walk and crouch-strafe speed to non-crouching levels, whether you’re aiming down sights or not. And that means you can do some pretty intense crouch-strafing during firefights to make yourself as small and fast-moving a target as we’ve yet seen in the Apex Games.

Revenant’s speed while crouch-walking is such that if you jump while crouch-strafing, when you land you’ll actually slide because of how much momentum you’ve built up. I’d encourage any Revenant player to make use of this, as the slide gives you an unexpected burst of speed for avoiding fire. But it also makes you a more predictable target if enemies see it coming, so don’t overuse this little trick or it’ll become more of a hindrance than a help.

Stalker also allows Revenant to climb about twice the height of any other Legend before losing your grip. This gives Revenant a similar aptitude for reaching unexpected places and flanking enemies to what Pathfinder has always enjoyed with his Grappling Hook and Zipline. Revenant thus poses a direct challenge to those teams holed up somewhere with just one or two (conventional) entrance/exit points, as he is often able to approach a fight from novel angles and perspectives. Make use of this when you can, but make sure you communicate with your teammates and don’t stray so far from their side that you can be picked off alone!

Apex Legends finally has a silencing ability! Revenant’s Tactical comes in the form of a throwable projectile like a grenade, which deals minor damage (around 10 damage, it seems) but more importantly suspends the use of all enemy active abilities (not passive) within its area of effect.

Couple things to note here. Let’s start with the good: even if you don’t hit your target with the initial AoE, the grenade will leave behind an electrical cloud for 6 seconds, during which time any enemy who walks into the cloud will also be silenced for 10 seconds. And it’s also very useful for zoning purposes, to dissuade enemies from approaching from a particular direction.

The downside is that it doesn’t last long. 10 seconds can pass in a flash if you’re not completely ready to push the enemy. And when it comes down to the real nitty-gritty of firefights, the fact that your enemy is silenced really won’t help you that much in most scenarios. Its strength is more in zoning enemies and preventing them from using mobility-based abilities to escape and reposition.

Another minor tidbit worth noting: just like Bangalore’s Smokes, you can use this ability while reloading or healing, because it only uses your off-hand. Noice!

Now, there’s a lot to unpack with this curious Ultimate. On paper it sounds amazing, but in reality there are a fair few caveats and downsides that limits its utility and forces you to be very considerate of where and when you place down your Death Totem.

When you deploy Revenant’s Ultimate, a glowing totem will drop in front of you over about a second or so. It’ll stick around for 30 seconds, during which time you and your allies can interact with it in order to enter “shadow form”.  Like I said, there’s a lot to unpack here, so I’m gonna make things simpler by dividing all the effects and consequences of using this Ultimate into pros and cons:

Oh, and make sure you have full shields before you use the Totem, otherwise you’ll be in a bad spot when your shadow form ends.

Nowadays this discrepancy is addressed with two Passives which are shared among multiple characters; Fortified, for Gibraltar and Caustic, which reduces their incoming damage by 15% and grants them immunity from gunfire slowdown; and Low Profile, which affects Pathfinder, Wraith, Lifeline, and now Revenant, and increases their incoming damage by 5%.

So we can infer that Revenant’s hitbox is on the smaller end of the spectrum. Perhaps not as small as Wraith or Lifeline, but then again Revenant’s Stalker Passive means he can be a much more difficult target to hit anyway – hence the Low Profile trait. 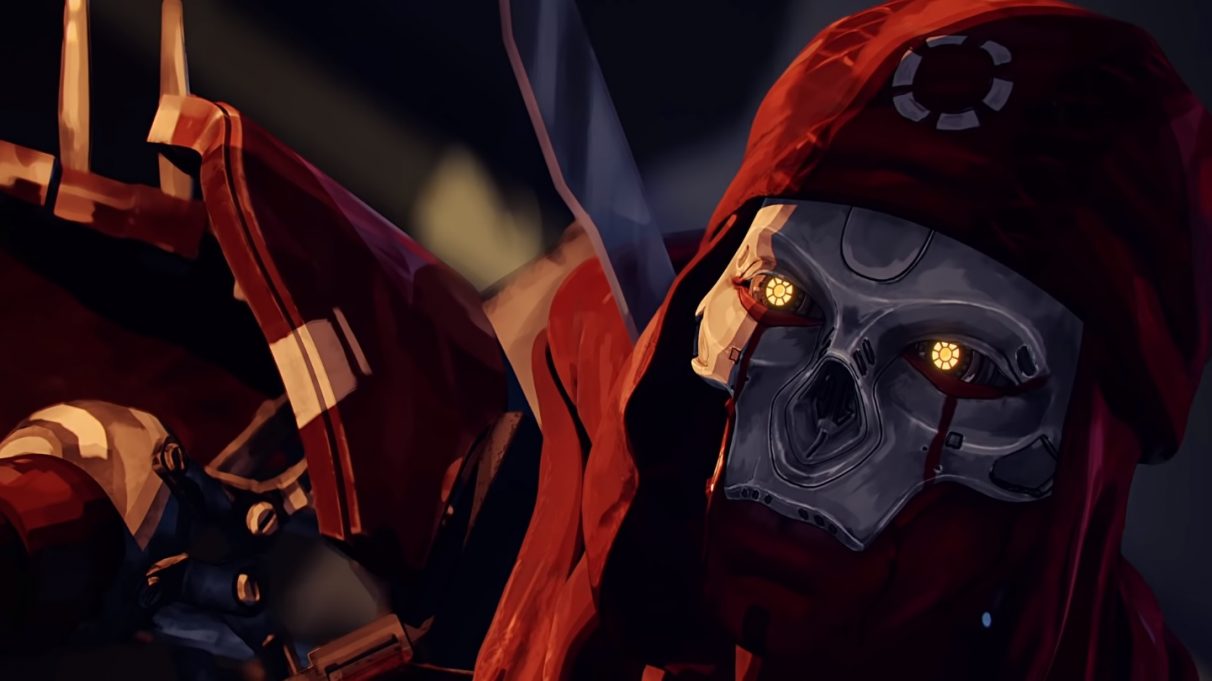 How to play Revenant – top Revenant tips and strategies

Finally, let’s finish up with some more general tips and tricks on winning Apex Legends matches as Revenant.

I think that’s as good a moment as any to wrap up this Apex Legends Revenant guide. Hopefully you’ve learned a thing or two – and if you’re after more invaluable knowledge on this fantastic battle royale, be sure to check out our Apex Legends tips!