I played 1997’s weirdly named Theme Hospital a fair amount in my teen years, but despite my love of both management games and very silly things, I never got around to playing 2018’s spiritual sequel, the equally weirdly named Two Point Hospital. With the game coming to consoles this week, however, I thought now would be a fine moment to dive in and see what I’d been missing. The answer is: a management game that’s so silly, it makes me stop worrying about actually managing.

As a serious businessman, I tend to get really serious about games where I’m tasked with running a business. I agonise about optimisation, and can sometimes get so wrapped up in deliberating over the placement, configuration and pricing of every last wossname, that I spend less time playing than I do gravely stroking my chin while looking at wikis. I’ve had loads of games of Planet Zoo, for example, where I burn through the majority of a six hour play session without spending more than about five minutes unpaused, because I’m that dead set on making sure everything is just right. Some of this is immersion, you know? I get invested. If customers complain about my pretend business, I feel I have failed. If the animals sicken, I am a bad father to them. If a potted plant is causing my bin emptiers to take a suboptimal route to the bins, I feel overcome with the lingering shame of poor binmanship. 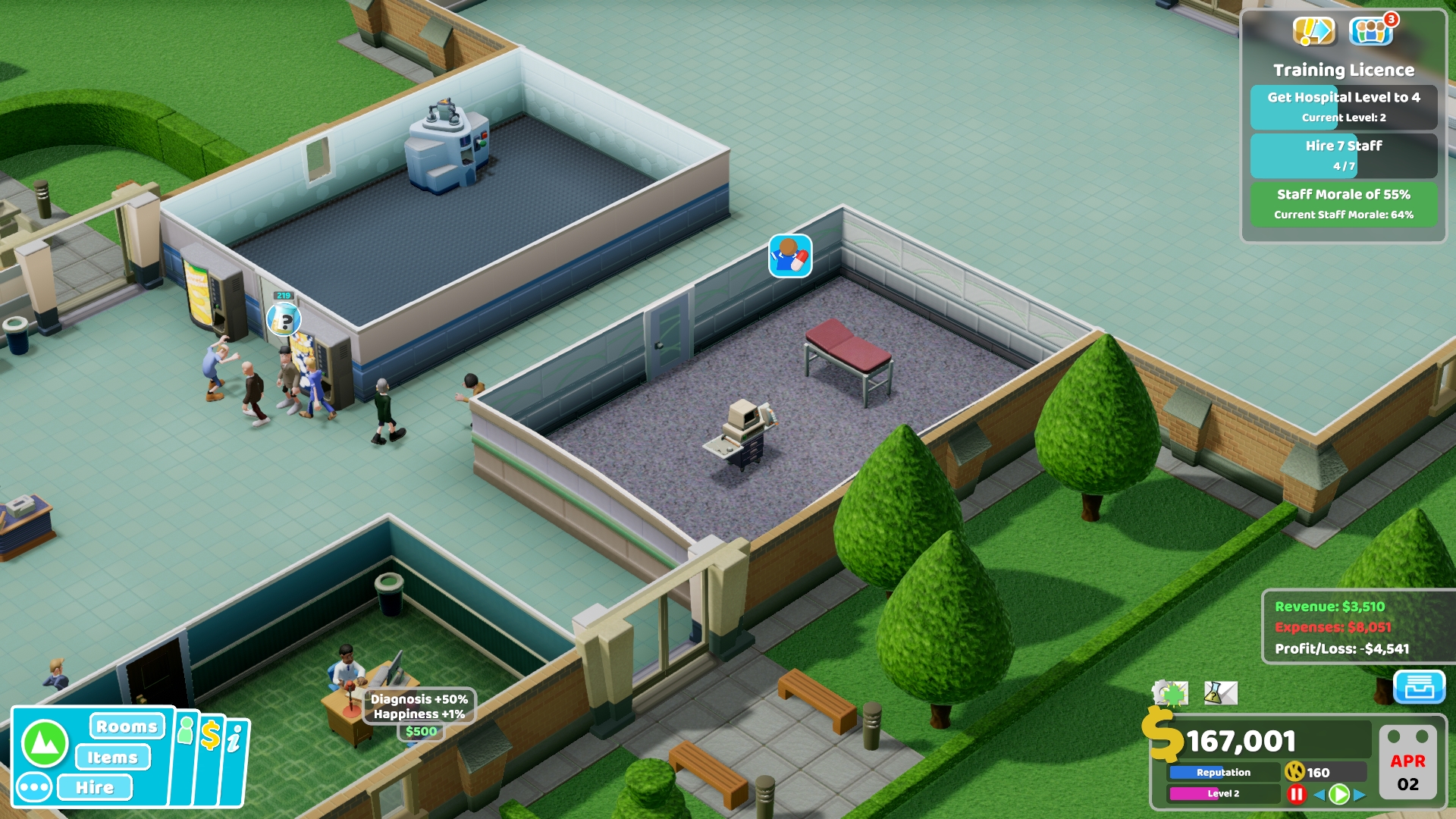 So far, so management game, right?

You would think, then, that a game about running hospitals – not exactly famous for being consequence-free operations, after all – would exacerbate my tendency towards paralysing myself with indecision. And you would be right. I would take it all too seriously, and probably forget to have any fun at all, in case it led to me losing my fictional medical license for pretend malpractice.

Lucky, then, that Two Point Hospital is not in fact a game about running hospitals. It’s a management game, sure, and a pretty conventional one at that, with all the mechanics you would expect from your bog standard, entry level, plopping-down-tables-in-a-building-with-no-roof-em-up, and very little innovation beyond that. But Two Point Hospital is only a game about hospitals in the same way that in a dream, you can walk up to a massive car full of sparrows, but know that somehow, it is also Bruce Forsyth’s Ghost (We’ve all had that one, right folks?). 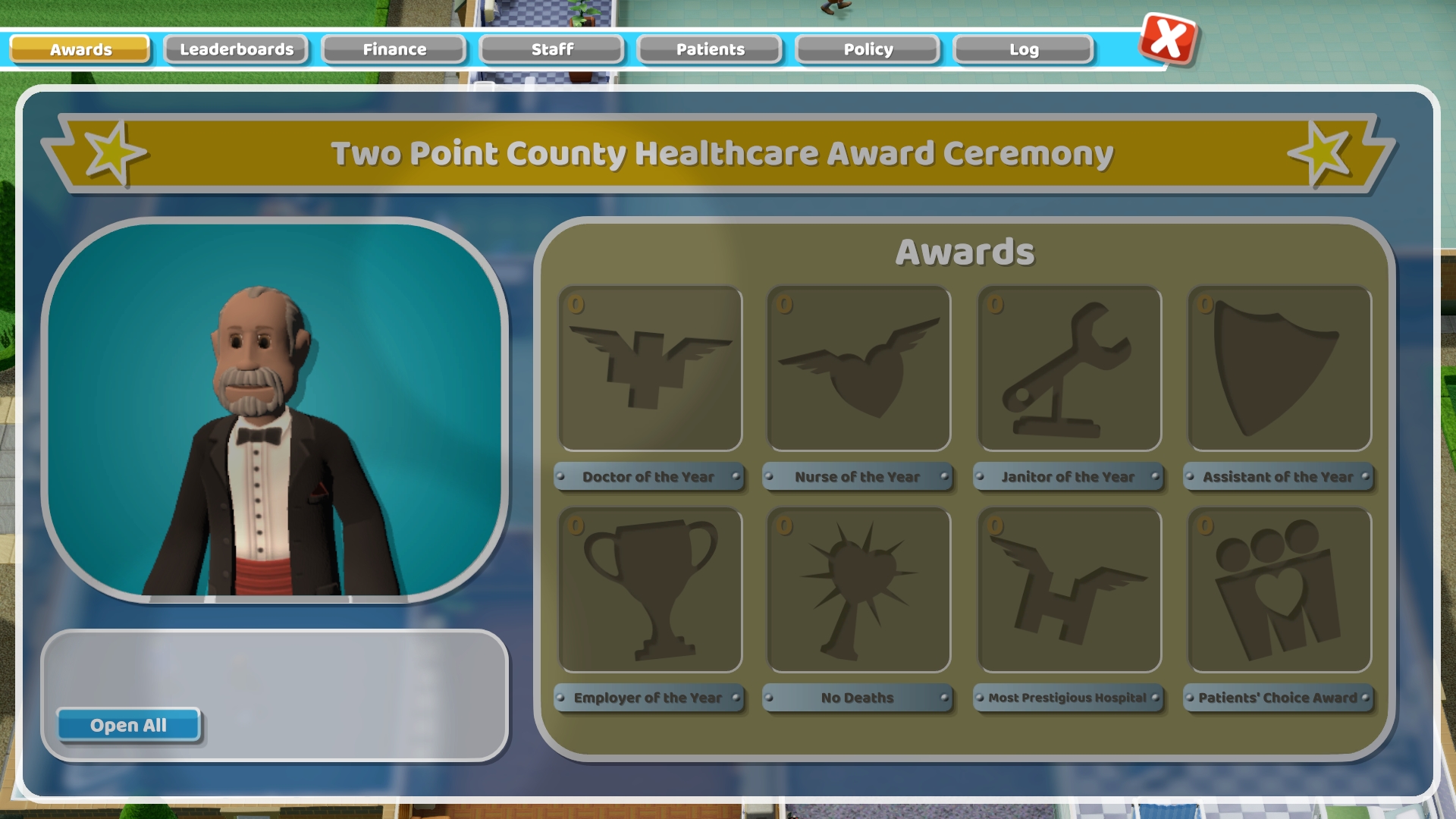 I just want to win the “no deaths” award.

I think when I realised this fully was on the second level of the game’s campaign, where I was told I had to build a psychiatrist’s office. I groaned internally, because I knew that sooner or later, I would have to prepare a take on how the game either managed a sensitive approach to mental health despite its general silliness, or whether it had done a bad by making light of a serious and debilitating range of illnesses.

A couple of minutes later, the waiting room for the psychiatrist was full of people dressed like Freddie Mercury, wobbling around the screen bumping into each other as they did ridiculous, flaily dance moves. They had a condition called Mock Star, where they all believed themselves to be famous musicians. Two doors down the corridor, a doctor was treating a patient… by pulling off their head. This was not a game that was trying to say anything about mental health. 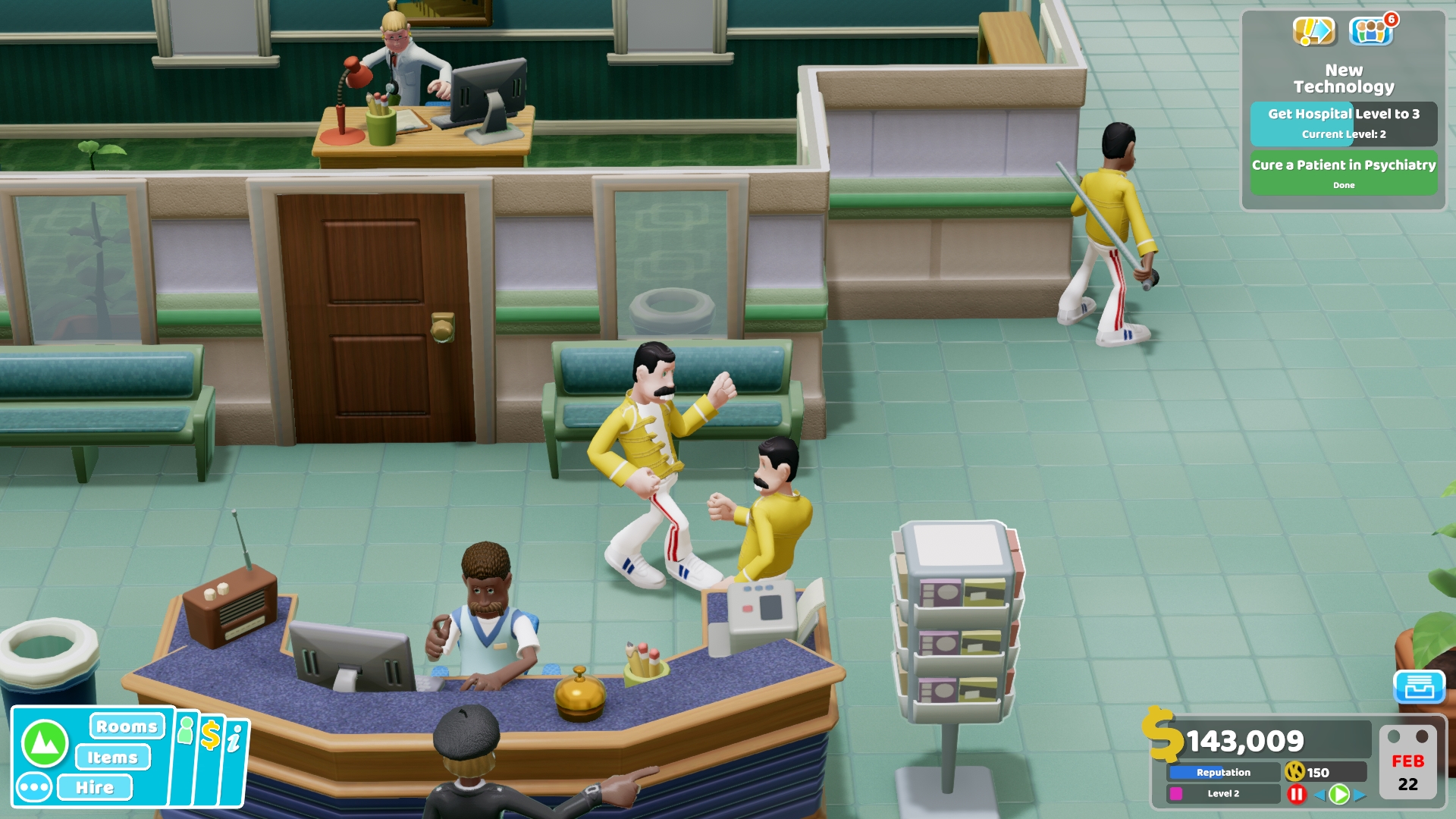 I swear, this character animation was proper, laugh out loud funny. They were swaggering around like the bear off of Altered Beast. Like they owned the place. Legitimately charmed.

Everything in the game is that ridiculous. It manages to avoid being “wahey, zany“, but only by virtue of leaning so hard into complete bullshit that it almost begins to feel like some sort of serious statement in itself. It’s an onslaught of silly little jokes, and you can try as hard as you like not to smile, but the execution is so charming it will get you in the end.

And for me, at least, Two Point Hospital cured me, at least temporarily, of my tendency to take management games too seriously. When the Freddie Mercuries had showed up, I’d been deep in trying to decide exactly what items to furnish my new psych office with for maximum efficiency. But as I realised there was no possible consequence this game could throw at me to make me feel remotely stressed about failing, I just thought “ah, fuck it”, and filled the room entirely with potted plants. Just because they looked funny with all the Freddy Mercuries blundering around among them. and sometimes, that should be enough. 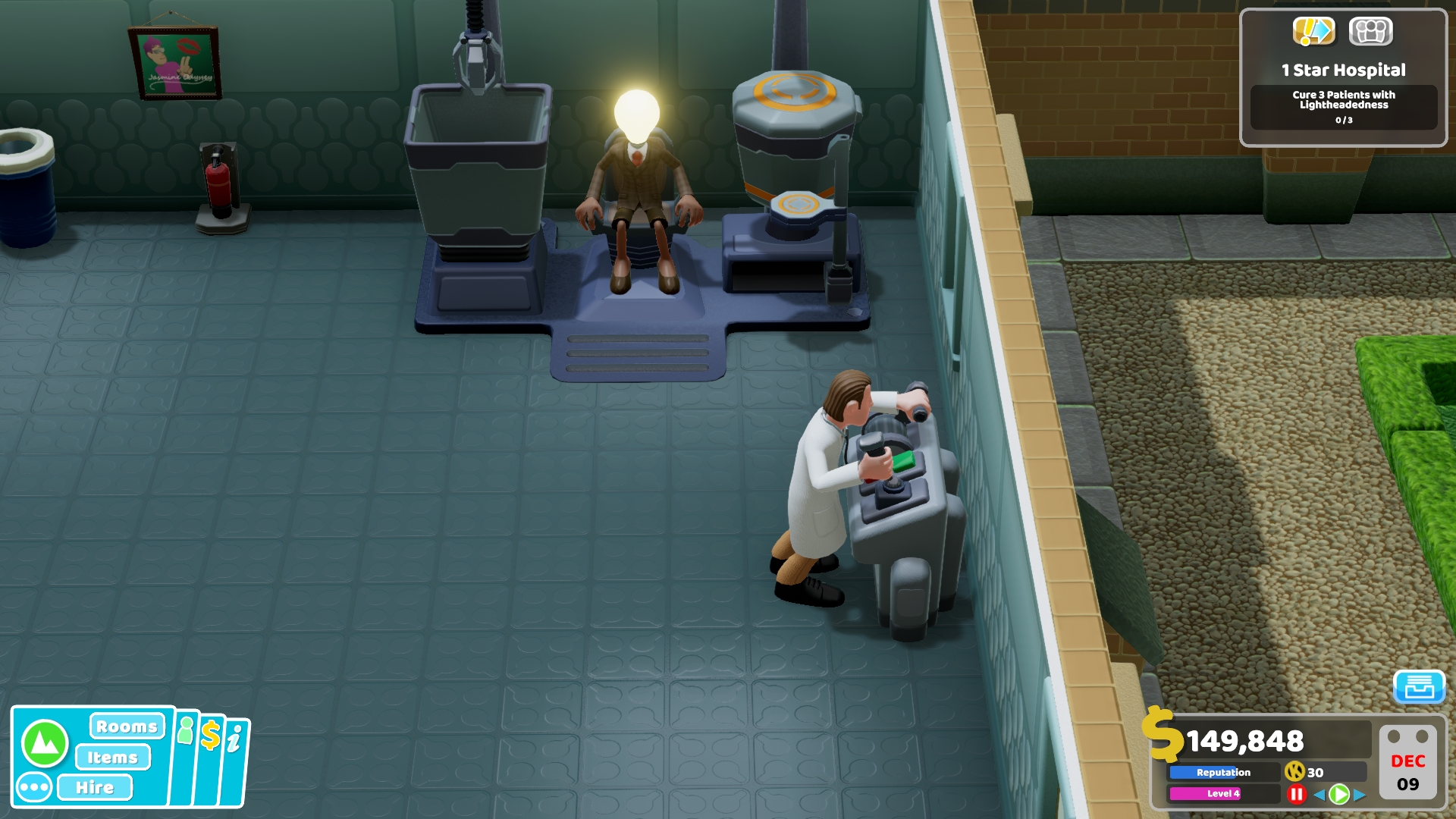 Guess u could say it was… light entertainment.

The doctor will see you now. Again.