After a string of slightly disappointing 1440p gaming monitors last year, the last couple of screens that have crossed my desk have really knocked it out of the park. AOC’s Agon AG273QX currently stands at the top of the pile with its superb picture quality and hassle-free FreeSync 2 HDR support (wot AMD are now calling FreeSync Premium Pro, in case you’ve forgotten), and now there’s MSI’s Optix MAG272CQR, another 27in, 2560×1440, 165Hz gaming screen that comes in at a very similar price to its AOC rival. Does it have what it takes to knock it off its best gaming monitor perch? Here’s wot I think.

Priced at an identical £399 / $400 at time of writing, the only real difference between the MSI Optix MAG272CQR and AOC’s AG273QX is its lack of HDR support. That, and its 27in VA panel is curved rather than flat (although its curvature radius of 1500R is so subtle I was barely able to tell from a normal viewing distance). Otherwise, you’ve got an equally great looking screen (more on that in a bit) with the same high refresh rate of 165Hz.

Admittedly, MSI do say the MAG272CQR is ‘HDR Ready’, but to all intents and purposes this is a non-HDR gaming display. The only sense that it’s ‘ready’ for HDR is that Windows recognises it as an HDR display and gives you a little on/off button in your PC’s display settings. There’s also a separate HDR picture mode in the Professional Pro tab of the monitor’s onboard menu system, but holy moly it’s really not a pretty sight when all that’s turned on. The HDR picture mode makes the screen appear overly sharp and grainy, and when I tried playing Assassin’s Creed Odyssey and Final Fantasy XV in HDR, I had a terrible time trying to wrangle it into something that didn’t make my eyes bleed. I jest, of course, but if you’re desperate for HDR, then this is not the monitor for you. 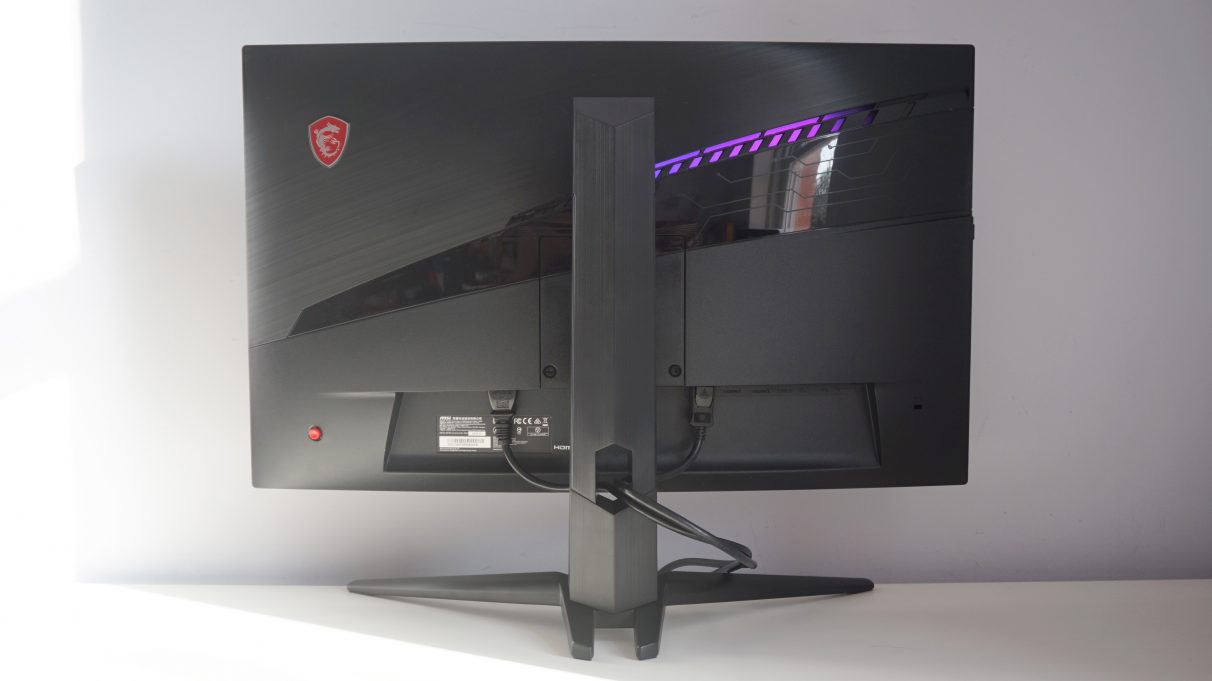 This being an MSI monitor, it obviously comes with a smattering of RGB LEDs on the back as well (although thankfully you can turn them off through the onboard menu).

As I said, though, this isn’t really a proper HDR gaming display. It is, however, a very good-looking one that you can use pretty much straight out of the box. When I tested it with my X-Rite i1 DisplayPro calibrator on its default User Gaming mode, User Professional Pro mode (confusingly there are two different menu tabs for its various picture modes) and Normal colour temperature, it came back with a practically perfect sRGB colour gamut coverage score of 99.7%. It also covers 89.7% of the HDR-grade DCI-P3 gamut as well, which is actually a couple of per cent higher than the AOC Agon AG273QX.

It’s not the kind of difference you’ll notice in practice, all told, but considering the very best HDR displays have to hit at least 90% of the DCI-P3 gamut to meet their various specification standards, that’s still an exceptionally high set of colour accuracy scores for a monitor that isn’t even really a proper HDR display.

I was also pleased to see the MAG272CQR had a low black level of just 0.11cd/m2 (the closer to 0.00cd/m2, the better), ensuring deep, inky blacks and crisp-looking text, as well as a lovely high contrast ratio of 2616:1. The latter isn’t quite as high as the AOC’s 2889:1, admittedly, mostly because the MAG272CQR’s brightness levels peak at a lower (but still perfectly acceptable) 303cd/m2 rather than 460cd/m2, but I was still able to see plenty of fine shadow detail in my games and test images. As a result, you can pretty much turn on this monitor and get stunning-looking images straight away without spending ages calibrating it yourself. 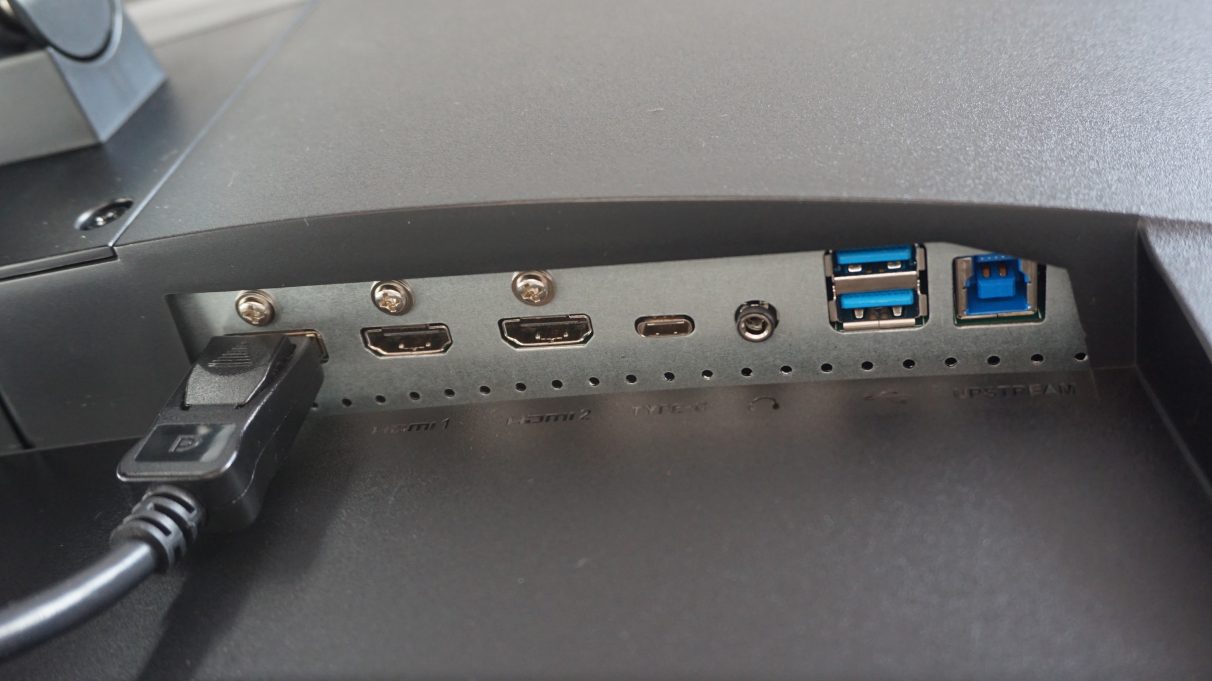 The MSI Optix MAG272CQR comes with a great set of ports, including one DisplayPort 1.2a input, two HDMI 2.0b inputs, two USB2s, one USB-C and a headphone jack.

Indeed, the only reason why you might want to venture into the MAG272CQR’s onboard menu system is to switch on some of its more gaming-specific special features. Chief among them is MSI’s anti-motion blur tech, which (as the name suggests) helps cut down on motion blur. Personally, I couldn’t tell much of a difference when I switched it on while playing Doom, although others who are most susceptible to motion blur may feel differently.

However, it’s worth noting that switching anti-motion blur on has come with a couple of compromises. In order for it to work, the monitor has to disable its AMD FreeSync technology, and the brightness also gets fixed to a set level – which I found to be a bit on the low side when the sun was streaming in the window right next to me. Instead, I preferred leaving it switched off so I could have a brighter, punchier-looking screen that didn’t suffer from screen tearing when I was whizzing around at the full 165fps afforded by its high refresh rate.

There’s also a night vision mode which helps brighten darker areas of the screen, as well as an eye-saver mode that filters out blue light for when you’re playing at night or in low lighting conditions. Personally, I’ve never found the former particularly helpful, and the latter I normally leave to Windows 10’s built-in night light, but it’s good to see them present and correct nonetheless. 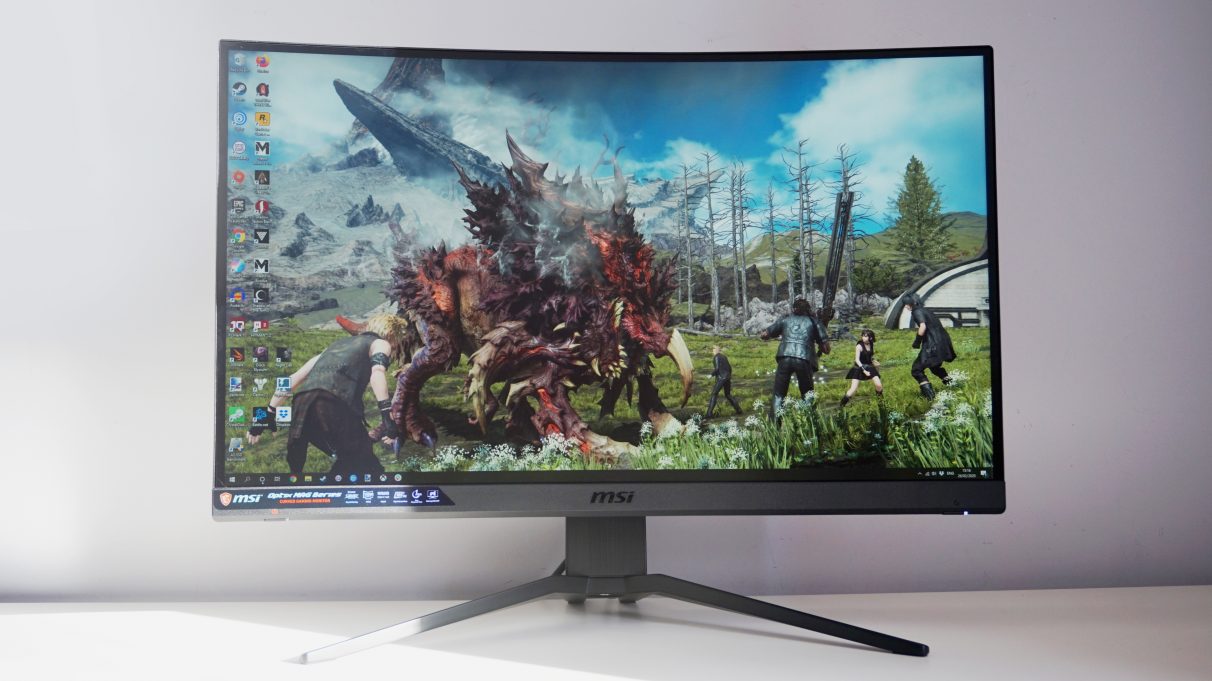 Another equally good to see is that the MAG272CQR’s FreeSync tech works just as well with Nvidia graphics cards as it does with AMD ones. It’s not technically one of Nvidia’s officially certified G-Sync Compatible monitors (yet, anyway), but when I tested it with my RTX 2060 Super and played another round of Doom on it, I didn’t see any signs of screen tearing or any of the other visual defects that sometimes occur when a monitor fails Nvidia’s G-Sync Compatible tests, such as blinking, pulsing or strange colours. As such, you shouldn’t have any trouble using this FreeSync screen if you’ve got an Nvidia graphics card.

Is it enough to push the AOC Agon AG273QX off its best gaming monitor pedestal, though? If the MSI Optix MAG272CQR were a fraction cheaper than its current asking price of £399, almost certainly. But when it costs exactly the same as the £400 AOC does in the UK, then the MSI just doesn’t give you as much for your money. The AOC has proper HDR, for starters (and doesn’t require endless amounts of faff and setup in my experience), and a lot of people may prefer its flat 165Hz panel to the MSI’s curved one.

It’s a slightly different situation for those in the US, as stock of the AOC Agon AG273QX still seems to be pretty scarce at time of writing. In this case, it’s probably worth snapping up the MAG272CQR for $400, as there’s simply no telling when the AOC will actually be available to buy. After all, its panel is just handsome as its AOC rival – the only thing it’s really lacking is that lovely HDR.