The games industry (and the games press) have always had a weird relationship with old games. From the open hostility of publishers in the 2000s to the overdone retro stylings of the 2010s, we remain in an uneasy entente with our ancient past. Many will insist that very old games were better. Others have played them since, and found them wanting.

There is a way to reconcile these factions. That way is being pioneered by the unsung master of modern rebuilds of archaic arcade ar…cology? No that doesn’t work. The point is, Hijong Park makes brilliant games based on hits from the 1980s, and you should play them.

Hijong Park came to my attention with my very first bout of Unknown Pleasures two years ago, with the excellent Golden Hornet. Combining the action of 80s arcade pieces Rescue and Choplifter with the navigation of Fort Apocalypse, this fast and tough 2D helicopter shooter remains one of the best action games I’ve covered for the column. 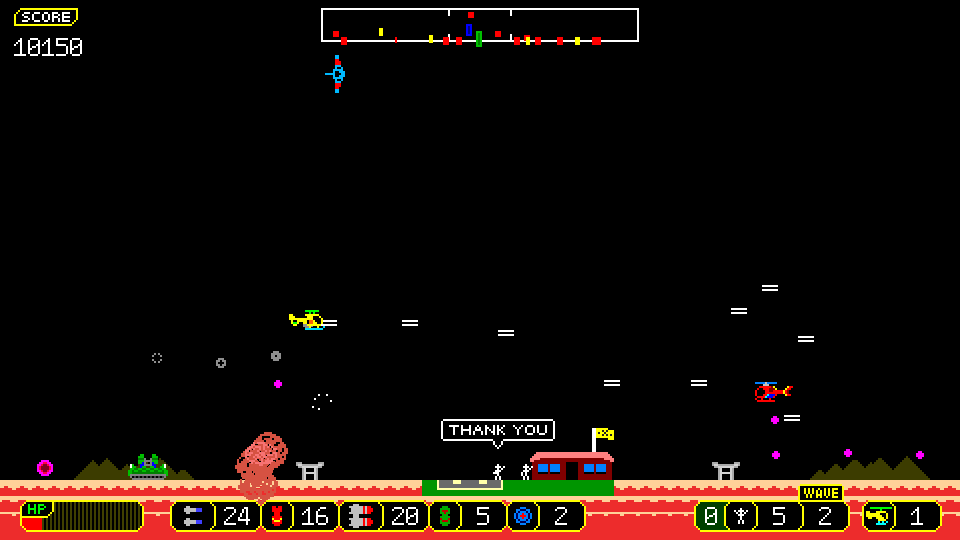 I honestly know nothing about this apparently solo developer, except that they’ve spent the last few years carefully extracting the best parts of many very old (and some barely playable today) arcade games and fusing them together to form not-quite-remakes with extraordinary skill. You can’t walk down games boulevard today without a few “retro” styled games hassling you for change, but I’ve never seen anyone so consistently pin down what made those games work, extract the staler, wonkier bits, and breathe real life into them again. They’re doing it for free, too, although donations are welcomed.

But if you put a gun to my head, I would… drop down to the floor below, shoot three or four guys and then duck down and shoot you in the legs when you dropped down after me. That’s Rolling Bird, an open homage to Rolling Thunder, with a reduction in graphical detail actually making it feel cleaner, a smoother pace, and some slight but significant tweaks to the controls making for a perfect degree of frustration-free challenge. You know those games that you find yourself idly booting up in between doing other things without even realising it? And sometimes you’ll get tired of it, exit, and then ten minutes later realise you’ve started playing it again? One of those. There are dudes and you have a gun, you know what to do. It’s a pure hit of lighthearted cartoony gunfun. 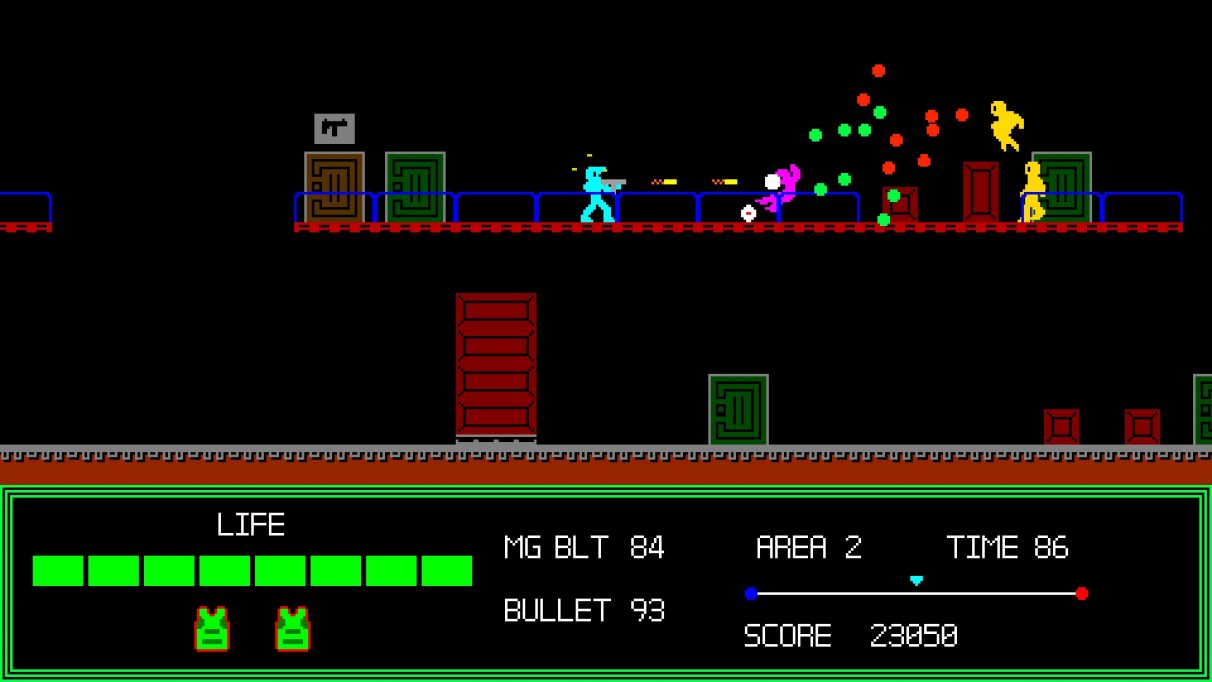 Rolling Bird, like all of these, is far smoother, faster, and more engaging than stills can possibly show.

Want something more elaborate? You’ll be wanting Frantic Dimension. That’s a perfect example of simple, clear rules leading to something both complex and easy to understand. It squeezes the intuitive ‘zone’ twin stick energy of the legendary Robotron into the design of Space Dungeon, making you dash around a grid of rooms shooting of hostiles, gathering as much treasure as possible before heading to the exit.

The excellent sound design alerts you in advance to incoming threats, but the complication of navigating and deciding how much more treasure you’re carrying and how much more you think you can chance, versus the threat of dropping it all, vs the path to the exit (and thus banking what you’re carrying for more lives and room-clearing smart bombs) make for a brilliant hybrid of naked action and advance planning. It even has a hint of the soulslike, as death drops all your treasure but leaves a marker on the map so you can recover it. If you die again the marker moves to your most recent death spot. The first treasure remains, but it’s easy to forget where it was when you’re constantly fending off monsters. 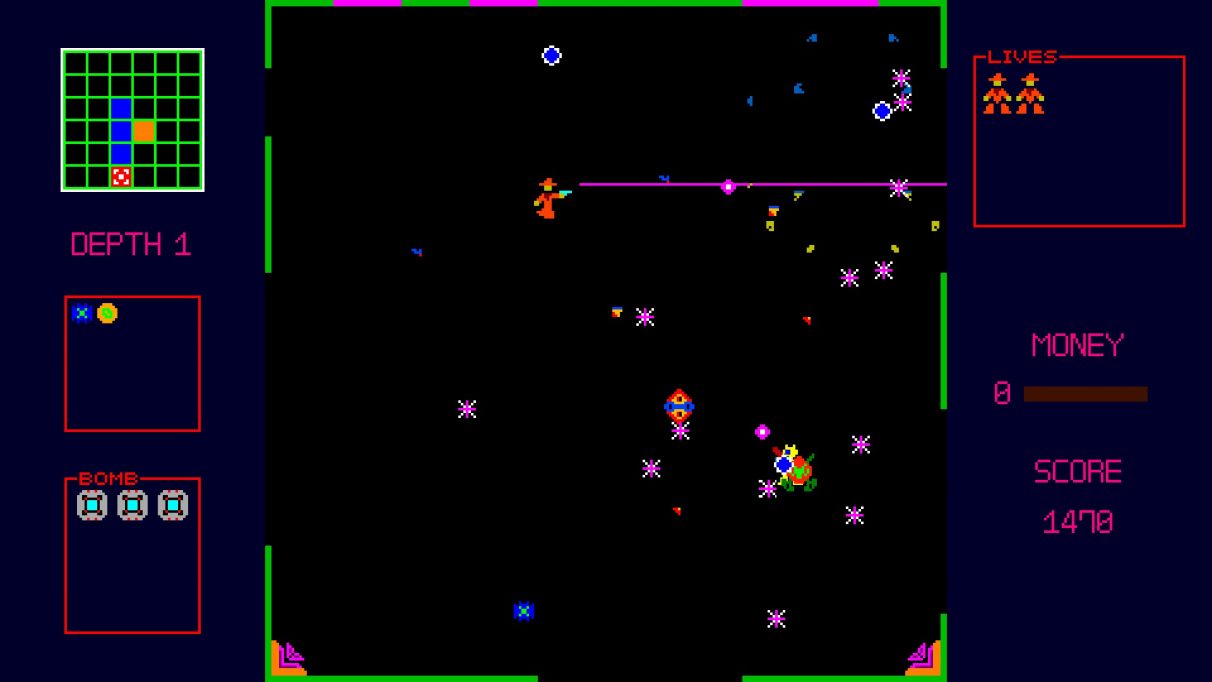 Frantic Dimension is Robotron with extra depth to flash fry your brain.

Golden Hornet is your bet if you’re looking for lots of tricky shooting that rewards you with more breathing room instead, as you gradually clear out each level. The top down helicopter attack shooter Steel Alcimus is a weaker entry, as the controls and tricky mouse aim never quite settled for me – crosshairs tend to throw me off and I often lose track of my mouse point. It’s a little bit more strategic than most of the collection, and namedrops Zeewolf on the amiga (gosh that needs more descendents) but plays more like Raid On Bungeling Bay. And Hijong Park has, of course, made several efforts at capturing the elusive essence of the Defender games in Pentasma and Offendron Warrior, the former being a bit more my flavour, and offering alternative special weapons and custom game modes too. 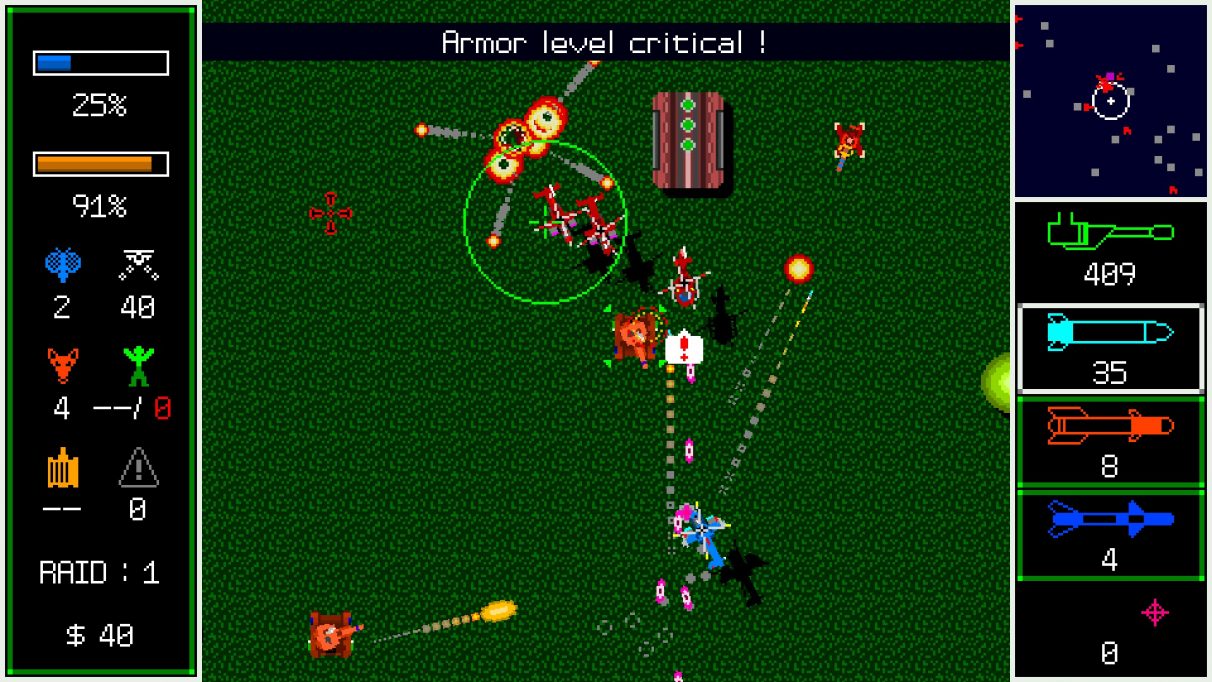 Steel Alcimus is possibly just too difficult for my clumsy hands.

Look, the fact is, most games from the 1980s have aged horribly. Even the better ones are a fun diversion for a bit, but no more so than 20 other games from the last year alone. But it doesn’t have to be that way. The disarming graphical simplicity and savvy, confident amendments to old formulas whose flaws are too often slavishly reproduced bring so much life to Hijong Park’s games. That deserves to be recognised.

You can get hold of some of these games via their Steam page, and the full collection is available on itch.io on a pay-what-you-can basis.