I did level four on my first go. That’s my crown and none of you can take it. Level three was a bastard’s hump and I struggled to get through it for hours, before I realised that I already had the supplies I needed to repair my ship. Those same supplies are also a requirement for the best weapons. That’s just mean, man. 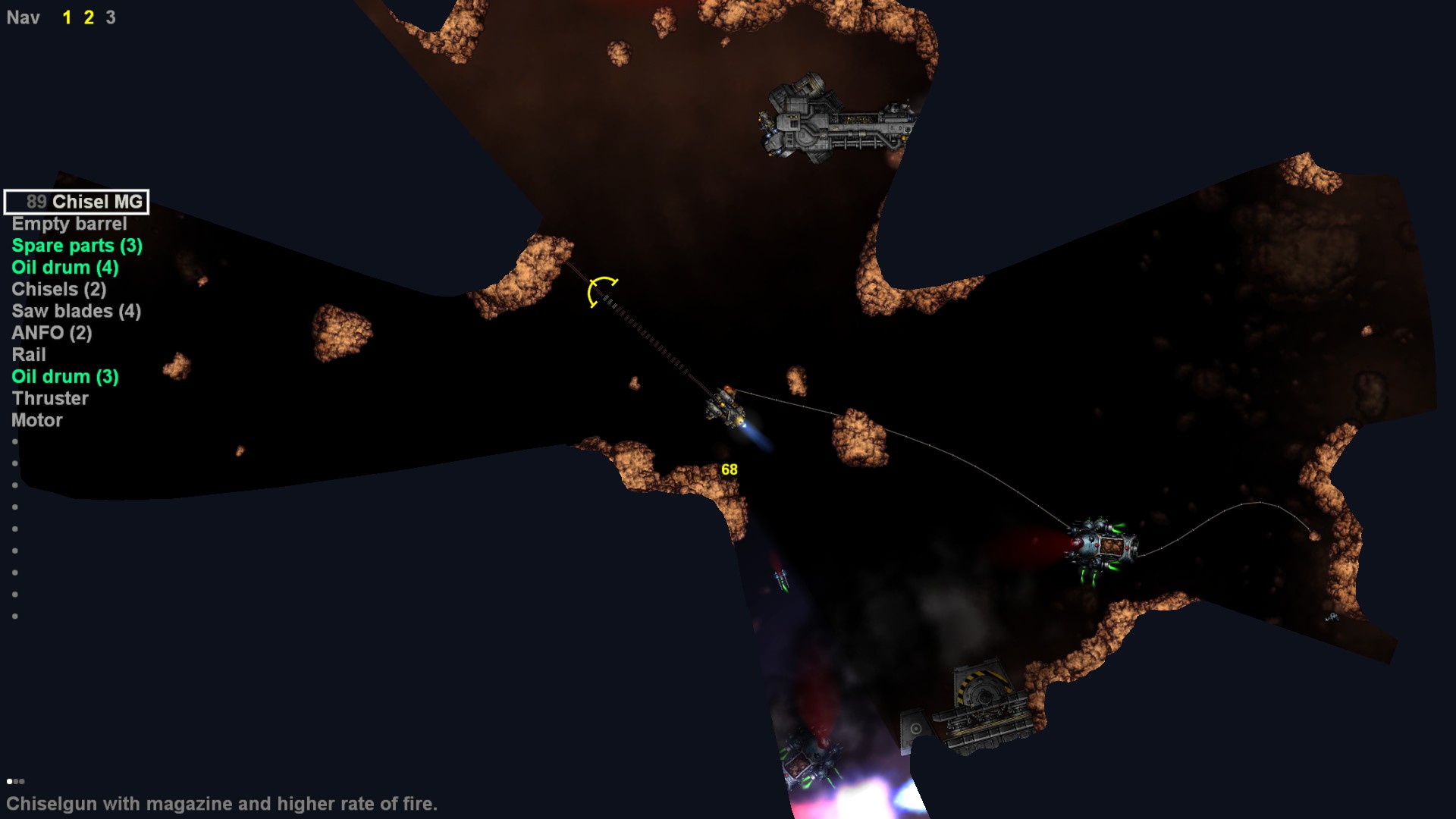 “Aaaiieeee he’s got meee leggo leggo no no” – me, apparently

The setup is fine. You’ve got hold of a wee ship and stumbled across a heap of hostile drones nesting amongst a chain of asteroids. Each level is surrounded by a wobbly, instantly lethal void, but you can escape if you reach three navigation points and then fly back to your carrier. Naturally, the drones aren’t happy about this, but that’s why we make guns out of scrap.

Much like Teleglitch, Savage Vessels is dotted with metal tubes, coils, bolts, and barrels of petrol you can press together into weapons and toys to better protect yourself. And again like Teleglitch, anything you can’t see will be blocked by an ominous grey, your precious line of sight constantly shifting as you float around rocks and installations, hoping the next surprise will be a cache of chisels or explosives, and not one of the big buggers with the harpoons.

The enemies are excellent. They share common stylistic elements but are immediately visually distinct, and each type has a specific alert bleep when it detects you. The first big ones I call ‘growlers’, because it amuses me and because of their deeper, slower noises as they light up and lumber towards you, picking up a lot more momentum than you’d assume. Should they get to medium range, they’ll fire a pair of harpoons and pull you in before thrusting out a nasty drill bit.

There are some later on that are sneakier, and float lazily around corners, looking all innocent and weak until they hit you with a devastating spray of gunfire, often from behind because they don’t announce themselves as dramatically, but gently buzz instead. 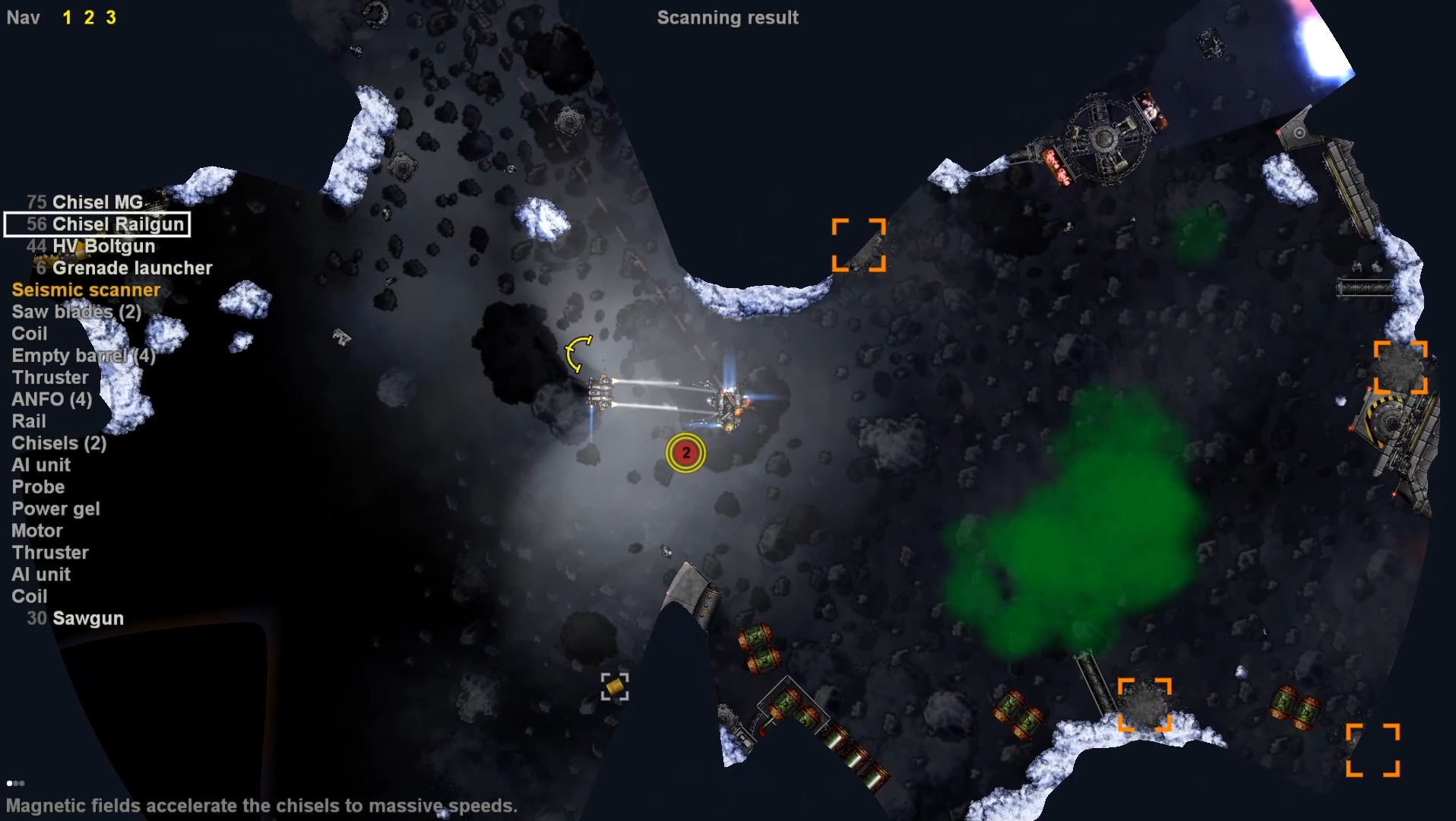 I allowed myself to be distracted and got full backstabbed by this little hero. Not even mad, honestly.

My favourites are the tiniest, little wasp robots that peep enthusiastically before charging. They’re extremely weak and melee only, so make for excellent target practice early on. But in the middle three of the game’s ten levels, they swap their sawblades for harmless nets, and spill out of launch tubes in packs when you approach, bundling around you and spewing out little webs like a litter of excitable puppies. They’re harmless if managed, but a nest of them webbing you when something else is nearby is a disaster.

And you’ll always feel like something else is nearby. Savage Vessels is no horror game, and it took a while before I adjusted to its relative generosity of ammunition. But its atmosphere is excellent. It’s not oppressive or stressful with it, but there’s always the worry about what’s next. Each level is made of handmade shapes procedurally arranged. Parts soon become recognisable but are different enough to matter each time (think of something like Spelunky, with its familiar shapes arranged in fresh ways). Each level hums with distant activity in between your engine’s thrusts. Static machinery clicks away, accompanied by deep chugging engines and whirring of unseen drones. There’s a satisfying gloopy sound whenever the void takes a ship or piece of debris (including you), and the further in you get, the more audibly advanced and active the hives and their territory become. 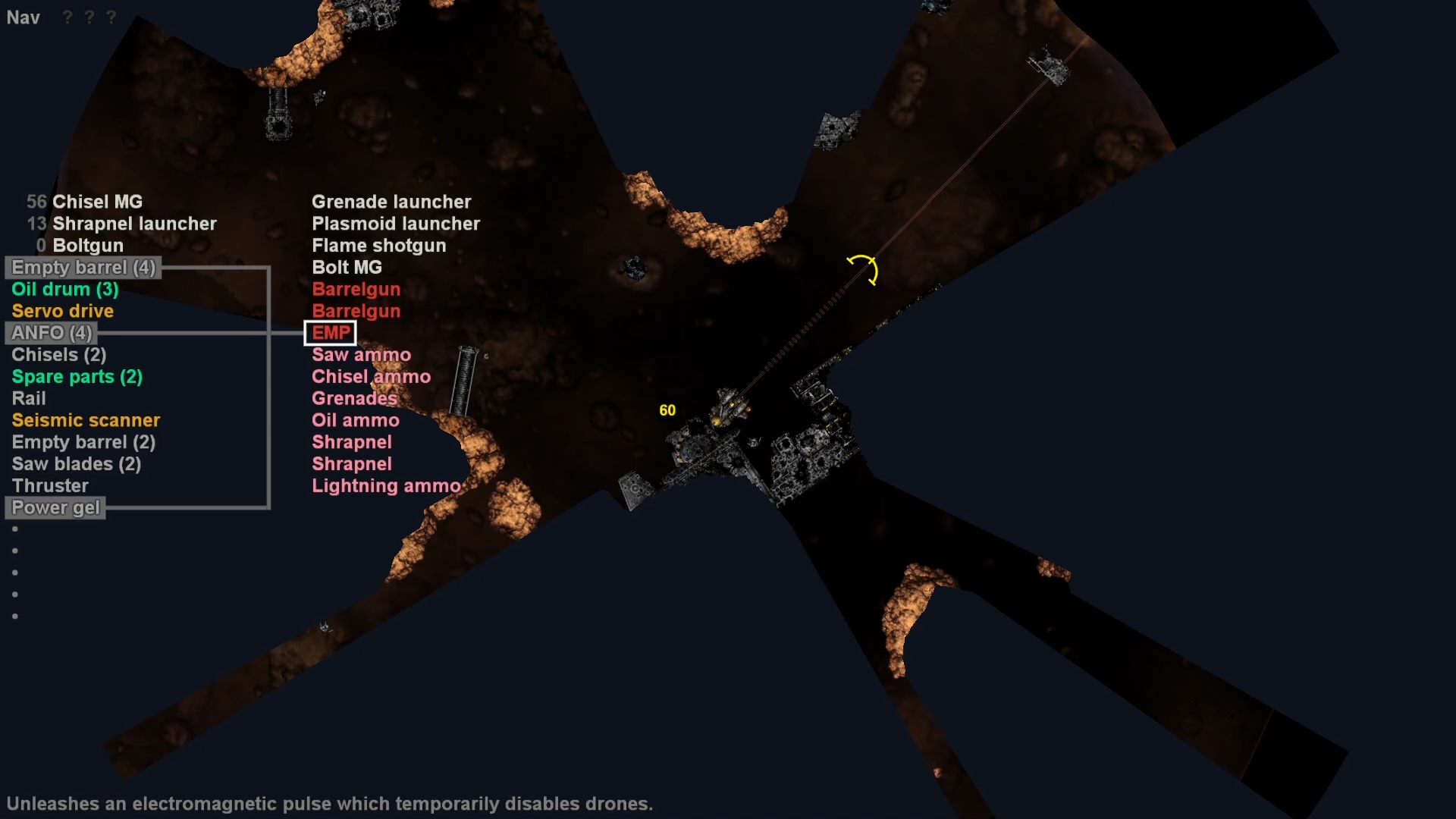 You can craft and organise your stuff at any time, but it’s wise to find a quiet corner first.

Although it’s hard, it gives you a lot of control. You move at your own pace, and some enemies are more easily manipulated or avoided. Crucially, most ships will have their senses scrambled for a precious moment if you hit them. It enhances the solid, satisfying plinks and physical impacts as you thunk a couple of big javelins into their hull, and they start to spill out evil green gas from the puncture. It buys you a little time, and makes it possible to save ammo at times by spearing a drone at just the right moment to watch it spin out into the void. I love the netgun too, on the few occasions where I’ve been quick-witted enough to yank several enemies into the black with it. On one early run, a growler bumped against a large boulder while chasing me, which then floating between us during our fight, giving me a perfect opportunity to simply push the growler out into the void using the boulder as a shield.

Mostly I play cautiously, drawing out and sniping/strafing enemies one at a time with the bolt guns and chisel railgun. Maybe I’m doing it wrong – perhaps I should take the Graham approach and be as reckless as possible. But it’s always tempting to try a trick like that, and playing this way makes it easy to get complacent, and panic when things spiral out of control.

That’s where I have to complain a bit. The controls are simple and easy to grasp, but their reliance on the mousewheel has killed me more often than my own poor decisions. Everything you carry is listed on the left, and can be moved around at will. But changing weapons, making repairs, and crafting alike depend on scrolling the mousewheel, an imprecise thing at the best of times. It doesn’t happen often enough to be a big problem, but the more stuff I acquired, the less I used most of it because I couldn’t manage swapping back and forth in a tight spot.

Ordinarily I’d save the game and go wild, but it is, of course, a roguelogue and thus experimenting rather than sticking to what’s safe and efficient will just mean you have to play the first few levels for the nth time. Thankfully, the hurdle of reaching the next shortcut point was a manageable challenge, and starting a game from there gives a generous selection of supplies. I can feel myself getting better at it with practice as I learn the quirks of each robot and hazard. 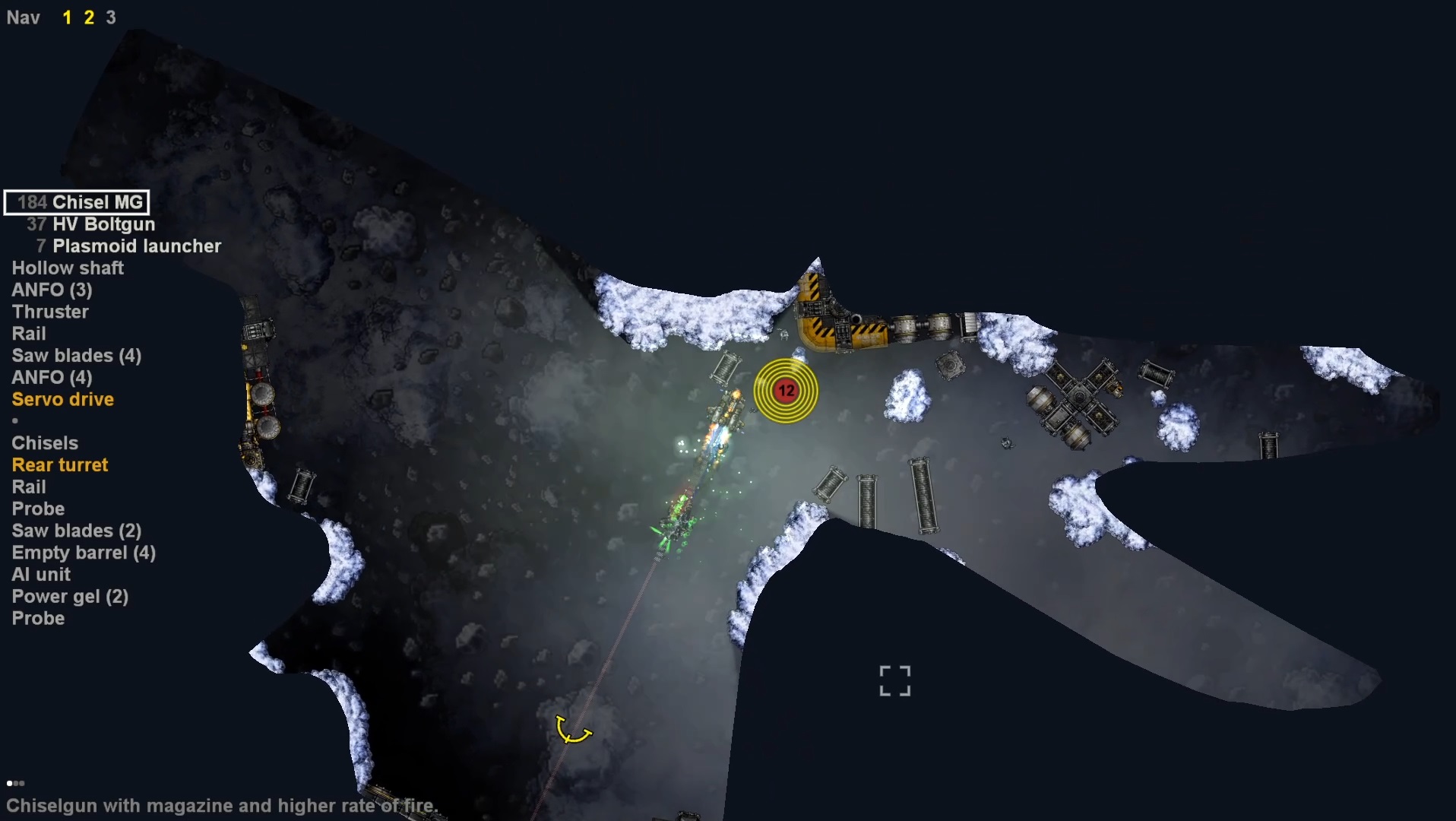 Ice bots swing sawblades on flailing chains. Single shots can hit the blades, so get spraying.

Some of it may be down to my preferred playstyle, but I found several weapons too much trouble. The powerful orb lightning gun is practically designed to get you killed, while cheaper weapons like the sawgun and flame shotgun sound cool as hell but do too little damage too slowly, at the exact range where you want to put something down fast.

There are some very unhelpful bits of text too. Crafting a gun you already have sometimes displays an exclamation mark and a warning, but it’s not explained what it actually means, and it doesn’t stop you from doing it anyway. Two weapons are described only as “similar to a grenade launcher”, and I had to find out for myself that – free tip – using oil drums repairs you for 5, and spare parts for 25 points. But that in itself shows a cruelly clever risk/reward design, as spare parts are also crucial for making most good weapons. Using the environment to hurt enemies is similarly risky but potentially useful and entertaining, and perhaps if you’re a less cautious player you’ll get a real kick out of the explosives and reckless lightning orbs before they blow you up too, you fool. 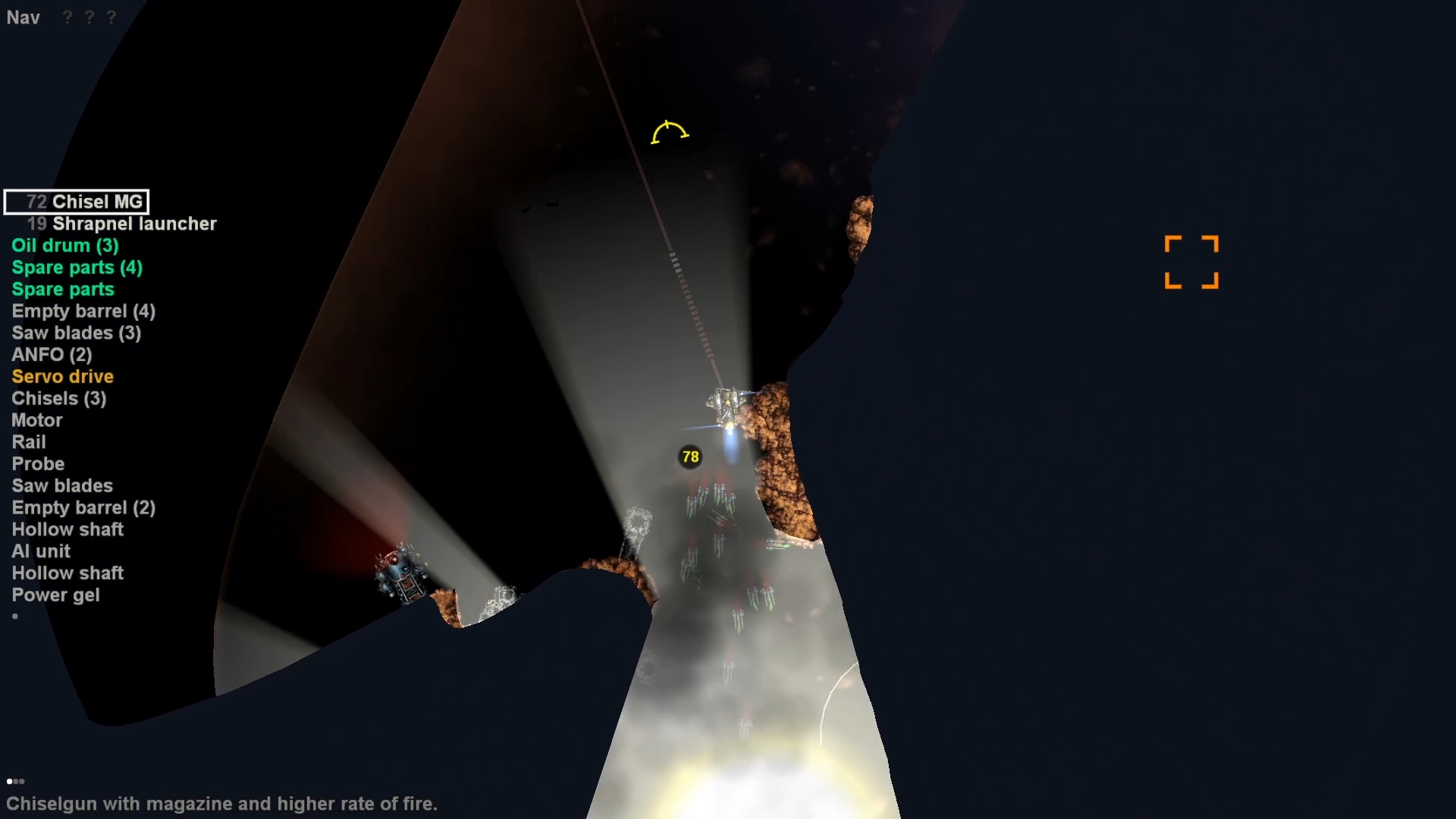 Bomber trucks mean the item that blocks most explosion damage is always tempting.

I can’t, in short, say anything bad about Savage Vessels that isn’t heavily outweighed by everything it’s doing that’s rewarding and exciting. Uncovering new levels stressed me out enough to wail at my desk, but in a way I enjoyed a lot more than the people around me probably did. Its slower pace and clearer presentation made for a less frustrating time than its zombie-stabbing inspiration, and its difficulty is more manageable and better at inviting the sense of “okay, well, this time…” that any good roguelike needs.