The Glorious Model O- was one of my favourite gaming mice of 2019, so you can probably imagine how thrilled I was when I heard they were making another, more ergonomic lightweight gaming mouse, the Model D. Priced at an identical £50 / $50 as the symmetrical Model O, the Model D brings all that honeycombed holier than thou greatness to an even comfier, right-handed chassis, weighing in at a mere 68g in both matte and gloss finishes. It’s a beautiful bit of kit, and it’s quickly become one of my new gaming mouse champions of 2020.

It is, however, a little disconcerting at times, as every now and then I’ll hear an audible ‘squeak’ from its mouse wheel. If my cats didn’t already think this was a new tasty treat to sink their teeth into, they certainly will now.

I jest, of course. So far my cats have shown no interest in hungrily making eyes at it when it occasionally lets out a very mouse-like shriek (update: Glorious have confirmed this is a defect of an early production run and the issue has since been rectified), nor have they started to clog up the Model D’s many holes with excess fur or bits of mud from their wet paws. Indeed, while a holey chassis like this may look like your worst nightmare for some, I’ve had no problems whatsoever keeping it clean for the couple of months I’ve been using it. I might feel differently if I regularly ate snacks at my desk while playing games, but I don’t. If you’re tidy and generally keep quite a clean desk, the Model D (and by extension, the Model O) shouldn’t pose a problem for you. 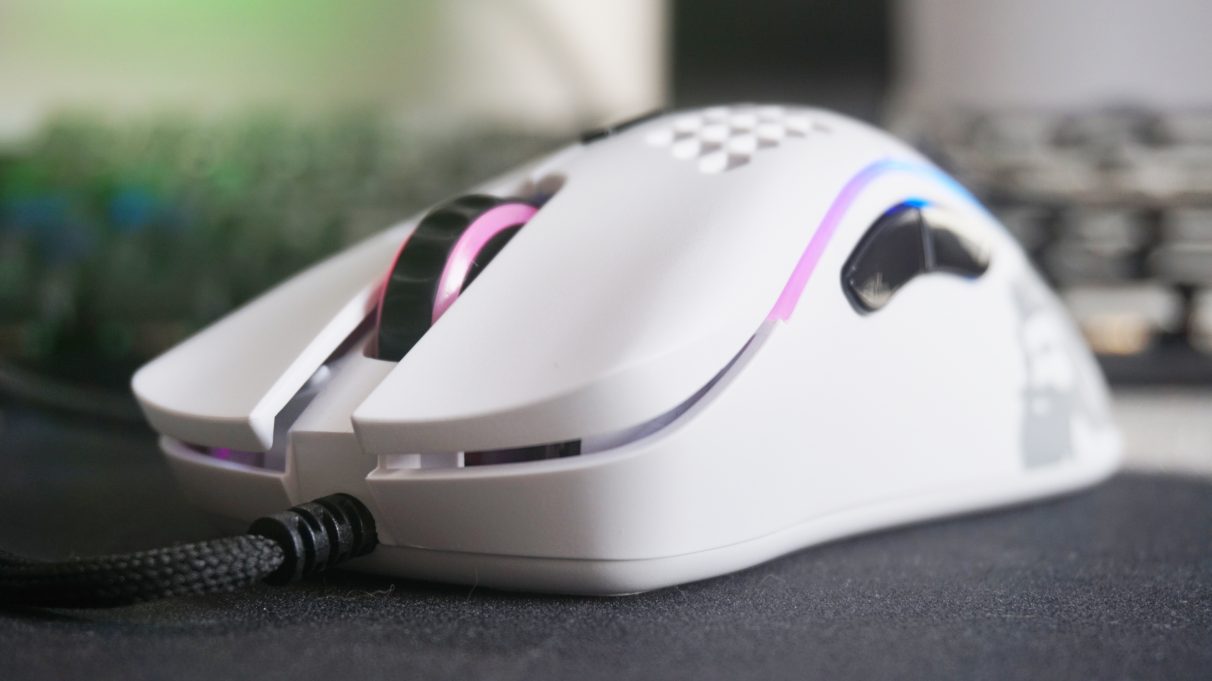 Besides, the holes are a large part of what makes the Model D so wonderfully light and airy. Sure, it’s not quite as light as Razer’s recently released Viper Mini, but the Model D’s larger, wider chassis feels so much comfier under the palm, regardless of whether you favour a hand-hogging palm grip or a more removed fingertip rip. As a bit of a palm gripper myself, the Model D fit my hand like a glove. Its two side buttons were within perfect reach of my thumb, and its central DPI button didn’t require too much of a stretch to hit with my middle finger, either.

It comes with four DPI or sensitivity settings enabled by default, but you can increase that six (and customise each one in increments of 100) by downloading Glorious’ free Model D software. Ranging from 400-12,000 DPI, the Model D’s sensitivity settings don’t go as low as other gaming mice out there, which often drop as far down as 100 or 200 DPI, but this probably won’t be much of a problem unless you play a lot of competitive shooters where you’re regularly lining up headshots down your sniper sights. For most people, what’s on offer should do you just fine.

You can also adjust the Model D’s rather in-your-face RGB lighting in its software app, although I actually quite like it as is. I’m not normally a fan of overly rainbow-fied gaming mice, but I do have to admire Glorious’ commitment to going all-out with it here. 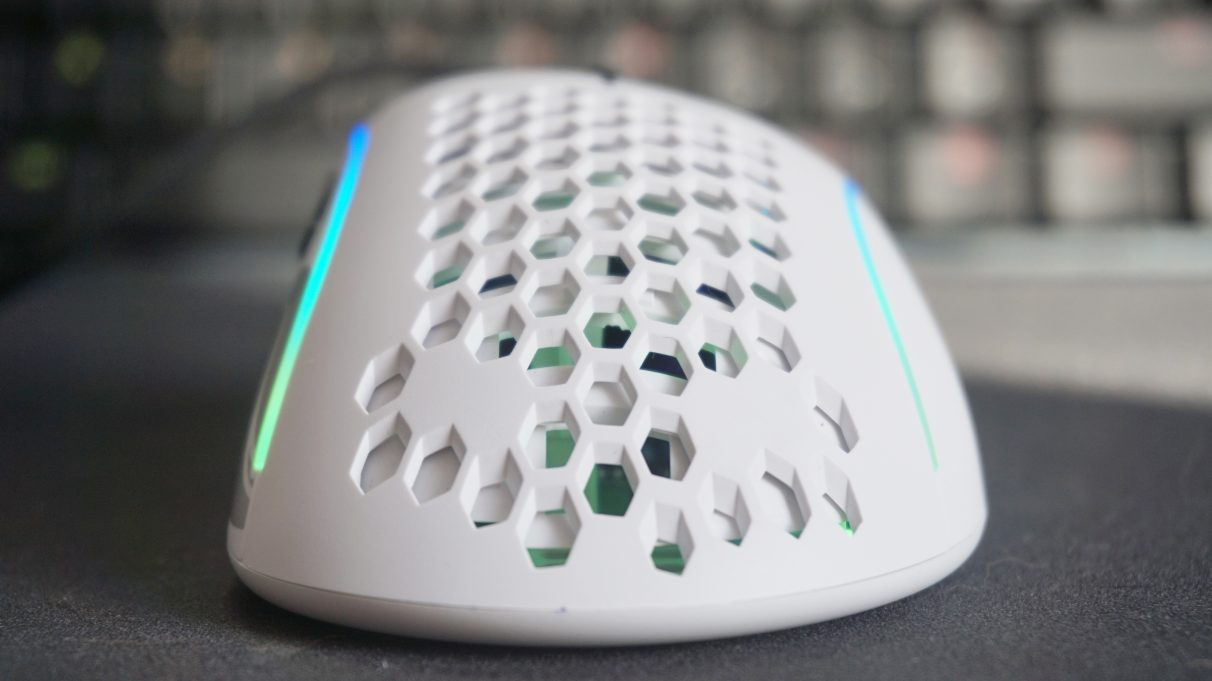 The biggest thing you’ll probably want to use the software for, though, is customising the Model D’s button commands. All six of them (including the main right and left click buttons) can be programmed to perform a variety of functions, whether it’s rearranging its default button settings or adding in new ones such as a three click option, a special fire key or a combination of keys or recordable macros.

You can also use them for media controls, opening your email, launching the calculator app or Windows Explorer, set them to open a web page, or change your current DPI settings on the fly, either by cycling through the 1-6 presets you have enabled or entering a special DPI Lock mode that slows the mouse down to a special set speed for as long as you hold the button down (handy for lining up those aforementioned sniper shots). 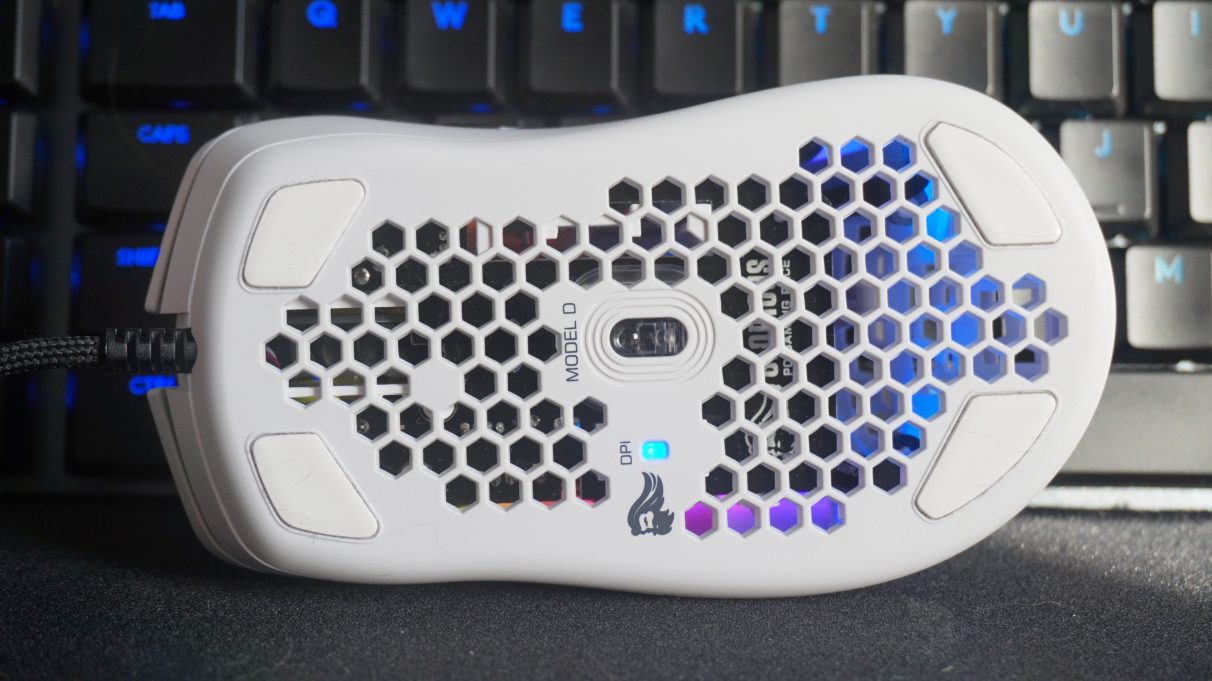 Annoyingly, the Model D’s DPI indicator light is on the very bottom of the mouse, making it difficult to work out what setting’s enabled by feel alone.

The only mildly annoying thing about the Model D is that there’s no way to tell which DPI preset you currently have enabled unless you turn the mouse upside down and look at its special LED indicator. It’s a small quibble in the grand scheme of things, admittedly, but given the abundance of purely decorative RGB lighting elsewhere the mouse, it’s a shame Glorious didn’t find a more practical use for it where it counts.

Still, the Model D remains a gorgeous (and dare I say, glorious?) gaming mouse to use on a day-to-day basis, and I’m just as much in love with this £50 / $50 ergonomic version of Glorious’ holey gaming mouse as I am their symmetrical Model O-. I wouldn’t say one was necessarily better than the other, though. It’s really just the shape of them that’s changed, as the rest of their various features and settings are all largely the same, so it really comes down to what you prefer most. If you like symmetrical mice, go for the Model O or the even lighter Model O-; if you prefer a proper right-handed one, go for the Model D. Either way, you’ll find both of them in my best gaming mouse list for 2020.