Now streaming live:
A Panel Shaped Screen is a monthly column where Giada Zavarise explores how comics and videogames inspire each other. This month, Giada lists interesting comics about people who play games.

TV shows usually suck at portraying videogames. I think we can all agree on this.

When they’re not busy pressing random buttons on controllers linked to the wrong consoles, typical TV players spend their time being awkward around girls, rambling about the nature of reality, or murdering people because videogames make you evil.

Being a nerd-adjacent hobby, comics tend to portray videogames in a more sympathetic light, giving space to nuanced stories about games and the people who play them. So lo and behold! Comics about people playing games. All nice. No murders, I swear.

And before you say “Penny Arcade”: no, I won’t be covering webcomics featuring two dudes playing games while delivering snarky comments about the latest industry drama — though it sure is a popular genre. If you’re looking for games analysis in comics format, I recommend Zeal’s essay comics instead, which focus on personal experiences like watching your dad play Tomb Raider or being a young furry on Gaia Online.

But let’s shift the focus from comics about the act of playing games, to the ones about the people sitting on the couch. 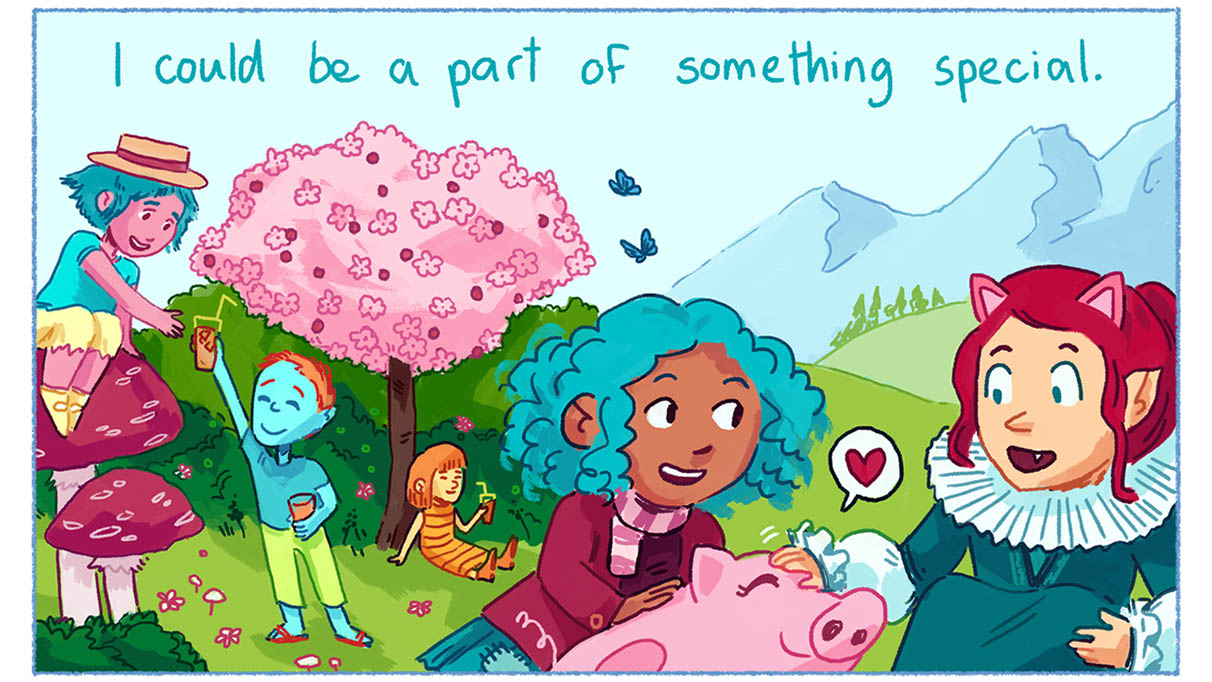 From This Feeling of Comfort, by Ashanti Fortson.

If you need to purge your eyes from all the episodes of The Big Bag Theory people inflicted upon you, read Genshiken.

Both series share a similar premise: a “normal” girl meets a bunch of nerds and gets involved in their activities, which include watching anime, attending conventions and, of course, playing games. But while TBBT invites the audience to laugh at the nerds, using the girl as a foil to their awkwardness, in Genshiken the “normal” girl, Saki, is the one who struggles to fit in.

Saki is a university student who joins an after-school otaku club to get closer to her handsome, socially clueless crush. She quickly conquers the boy’s heart, but never manages to smother his love for videogames. While initially repulsed by her boyfriend’s hobbies, Saki ends up making sincere efforts to connect with her beloved. In a truly heartwarming moment, the club members teach Saki how to play Puyo Puyo, allowing her to play something with her boyfriend for the first time.

The boyfriend then proceeds to utterly obliterate her. 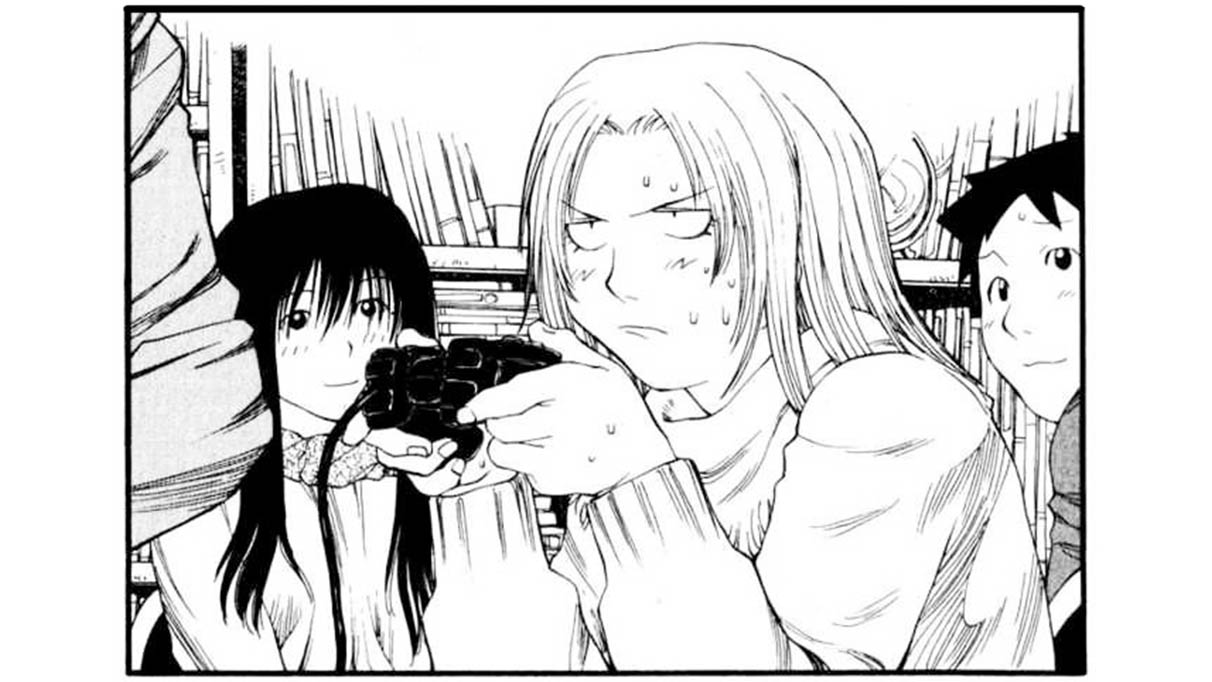 Unfortunately for Saki, her hot boyfriend is not just a videogame fanatic, but part of a niche even his friends struggle to understand: a hardcore fighting games enthusiast. For people like him, the concept of “be nice to inexperienced players” is unheard of: competition is all that matters.

The protagonists of manga series Hi—Score Girl are the same: a boy and a girl, both ferocious Street Fighter II players, who keep crossing path at various arcades. Their rivalry gradually morphs into friendship, but competitiveness remains the core of their relationship. Because it’s fun to play games together, but it’s even more fun when you’re winning.

Fighting games are a popular subject for comics, because allow artists to draw cool battle scenes and to be all dramatic. Just look at Dennou Kakugi Mephisto Waltz, a manga about a former genius pianist who, after a career—ending accident, finds new joy in fighting games.

He discovers to be a natural, of course. He gets a rival/mentor who believes in him! There are tournaments! And long rants about latency in online matches!

Fighting games are a serious business, y’all — at least for certain kind of players. People play different kinds of games in different ways, and sometimes, this can create friction even between people who share the same hobby.

The protagonist of a series called Gamers! perfectly embodies this struggle: he would like to join the after-school gaming club, but the members are focused on training their skills for competitive play, while he just wants to relax while playing the casual games he enjoys.

While the game mentioned so far, like Street Fighter II and Puyo Puyo, are familiar to PC users, characters in mangas tend to play the console versions or go to arcades. PC gaming is not as big in Japan as it is in the West, though a popular genre often depicted in comics is almost exclusively played on PCs: visual novels. 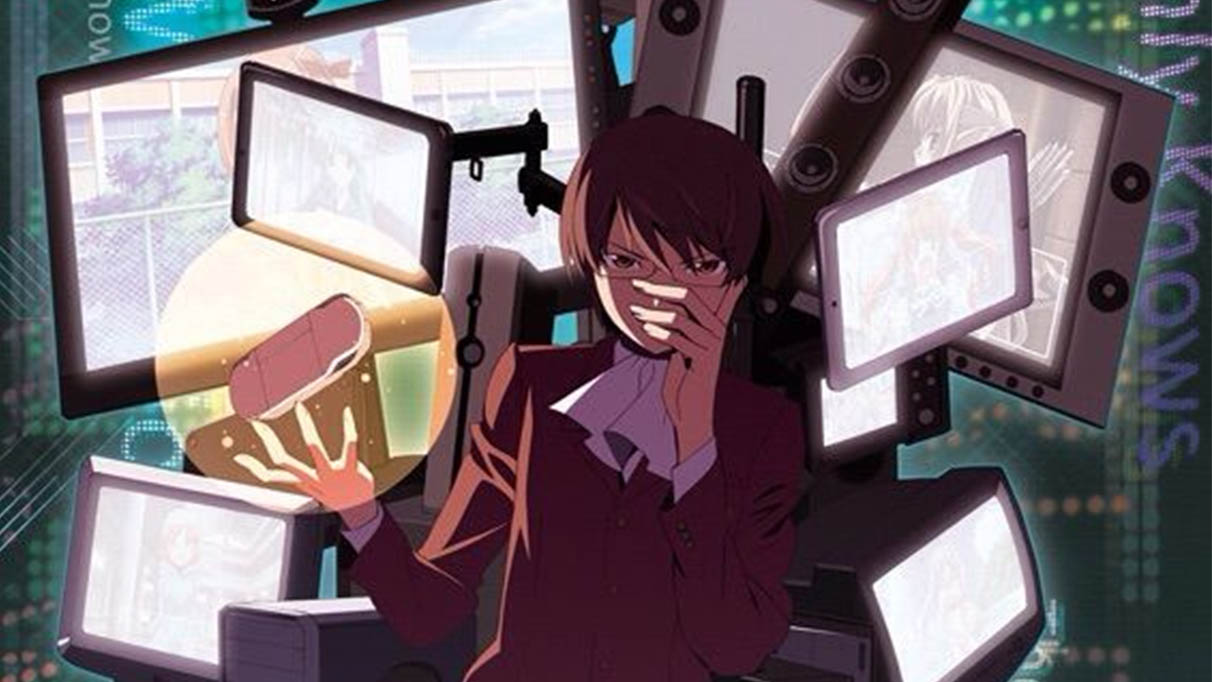 Do you too have a love-hate relationship with dating simulators? Then you’ll enjoy The World God Only Knows, a manga series about a visual novel-obsessed teen on a quest to save the world.

Our protagonist, Keima, is considered a god of dating simulators, capable of conquering even the fussiest videogame characters.

When a deviless in distress asks him to help her capture evil spirits hidden in maidens’ hearts, he does it by applying the strategies learned in the virtual world to real life. In his mind, girls are like characters of a dating simulator, and must be conquered by increasing friendship points through the right mixture of gentle acts and special events.

For the shy, introverted Keima, dating sims are like blueprints he can follow to navigate difficult social interactions. And the strategy works to an extent — until he starts realizing that real life is more complex than games. Because the girls he courts are not stereotyped characters, but real people with hidden depths that defy tropes. And the only person who seriously gives him problems is a girl who is average in every way — the one he doesn’t know how to interact with because such boring characters are never featured in dating sims.

All the titles mentioned so far lean towards the happy rom-com variety, where boy meets girl thanks to the power of videogames. But as women and people of assorted marginalized genders know, people are quick to attack women when they feel they are invading their spaces — especially in online spaces.

One of the protagonists of Dennou Kakugi Mephisto Waltz is a woman who plays online using a male character, but never plays in real-life to not reveal her true identity.

The protagonist of webtoon Recovery of an MMO Junkie is in a similar situation: she’s a woman playing as a pretty boy, and she’s struggling to balance her fake persona with her desire to make meaningful connections. One of her guild members, on the other hand, has been stalked and harassed by other players because they play as a cute female cleric.

The graphic novel In Real Life also starts with girls who admit to never playing female characters for fears of being harassed. The protagonist, Anda, only starts to feel welcome in online spaces when she gets invited to a girls-only guild.

The comic quickly moves away from gender issues, focusing on a different, darker subject: this economy.

Anda gets involved in a plot to curb the activity of gold miners — players who sell in-game currency for real money. She ends up befriending a young gold farmer from China, and starts realizing that not all farmers are bots, but real people with very real reasons for doing what they’re doing.

While the story talks about money, workplace issues and the power of unions, it is, at its core, the story of two teens who bond over their shared love for videogames.

See? Love and friendship. Not murder. Take that, TV execs.