Rebel Galaxy Outlaw is that rare space sim that manages to capture the thrill and wonder of exploring a star system without wildly over-promising on what to expect. It may only be set in a single region of space with 40-odd star systems to peruse, but within those limited confines is a game packed with dogfights, bounty hunts, underhand deals and fraught delivery runs. Action is the name of the game here, and Double Damage Games makes you get you’re able to get your hands dirty at every possible opportunity.

Thanks to Outlaw’s clever targeting system and auto-pursuit system, dogfights are brilliant fun. The auto-pursuit system in particular is a stroke of genius, as a single press of a button will tether your ship to the tail of your target. No matter how much they twist and turn and try and double back, you can get on with the important business of shooting them down without worrying about frantically spinning out of control and getting disorientated. You can turn it off if you prefer to go old-school with your space fights, but leaving it on makes every skirmish feel like a nail-biting battle of wits rather than chance pot-shots into the void.

Rebel Galaxy Outlaw also manages that rare feat of giving us a character we actually care about, and a story that gives a place and purpose in this vast region of the unknown. A lot of it covers familiar ground, but it makes a refreshing change from your No Man’s Sky and Elite Dangerous types. Lovingly crafted and always stunningly pretty to look at, Rebel Galaxy Outlaw always has us coming back for more.

Where can I buy it: Epic

What else should I be playing if I like this: Double Damage Games’ original Rebel Galaxy from 2015 was previously on this list (and is technically a sequel to 2019’s Outlaw), but if it’s more dogfights you’re after, then check out EVE: Valkyrie (which you can now play without a VR headset). 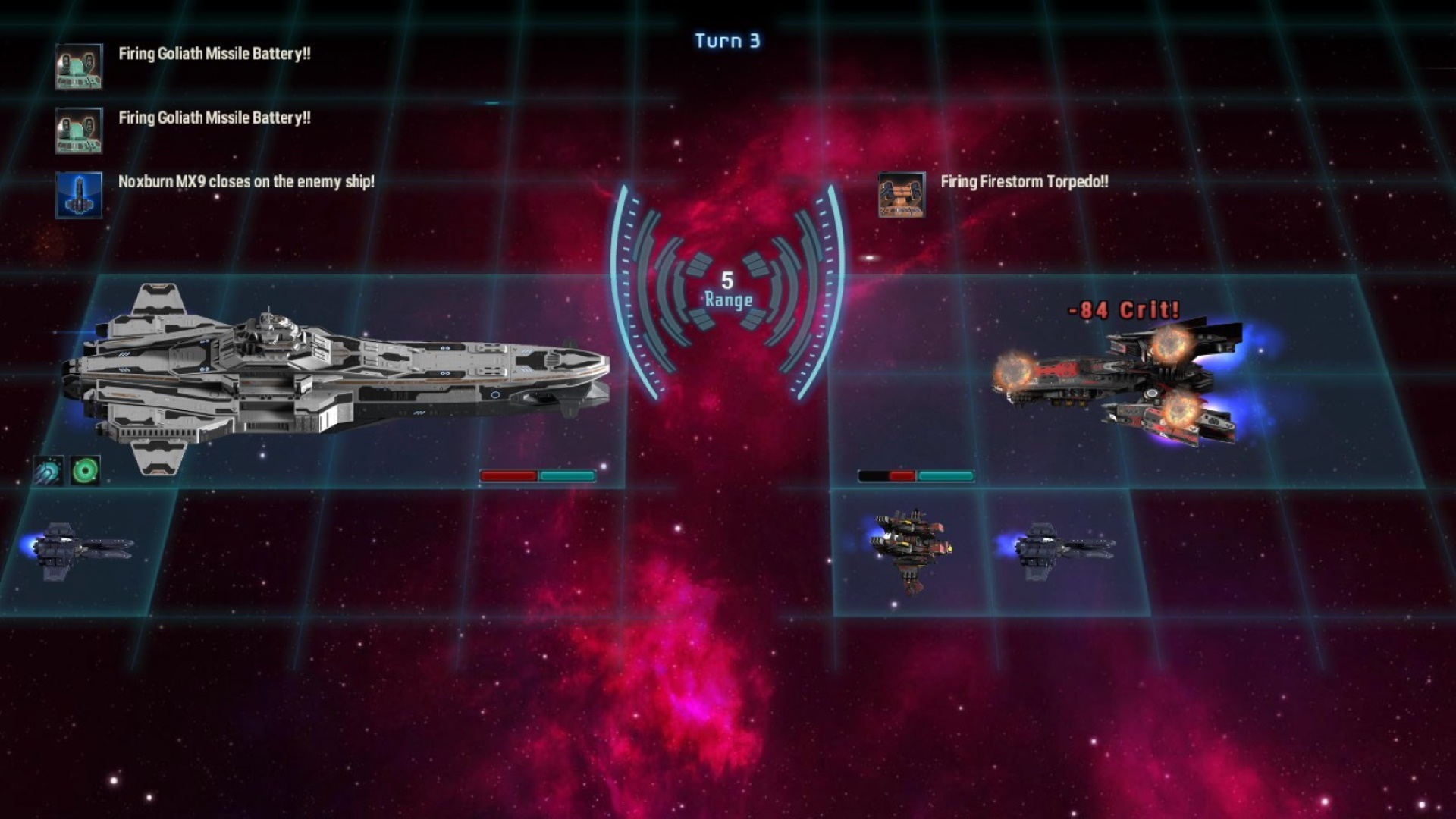 Space captains are better served than ever for 2D Elite-ish games, but Star Traders: Frontiers is by far the best out there. Create your captain, pick a ship, and fill it with a crew of pilots, navigators, swordsmen, and whatever niche experts suit your needs. Getting on your feet can be hard, but once you’ve got a little money and the favour of some political figures, the galaxy is yours to adventure in.

Your ship and crew define you more than in any space RPG, as you can refit and reorganise them as you see fit. Spies aid in rooting out information. Military officers can perk up morale during its turn based ship fights. Explorers are adept at defending against alien attacks when you’re searching a planet for that criminal a local noble wants taken in. Almost everything you do in Frontiers can affect the economy, status, and political relations of local characters, planets, and factions, whether you want to dig into its multi-threaded story jobs or not. And you’ll inevitably end up doing more than you planned for when opportunity knocks. Your unarmed spy ship might make a great smuggler. Your ship-disabling pirates might create perfect opportunities to start taking on bounty hunter jobs. Or you might just stumble across some exotic goods, and find yourself waylaid in a chain of unexpected events on your way to find a black market to sell them at.

Also you can hire a sniper who wears pink thigh high boots in space. What’s not to love?

What else should I be playing if I like this: Space Rangers 2 makes up for its older, rougher edges with variety and sheer ambition, and keep an eye on the same devs’ Cyber Knights: Flashpoint, which recently made over four times its target on Kickstarter. 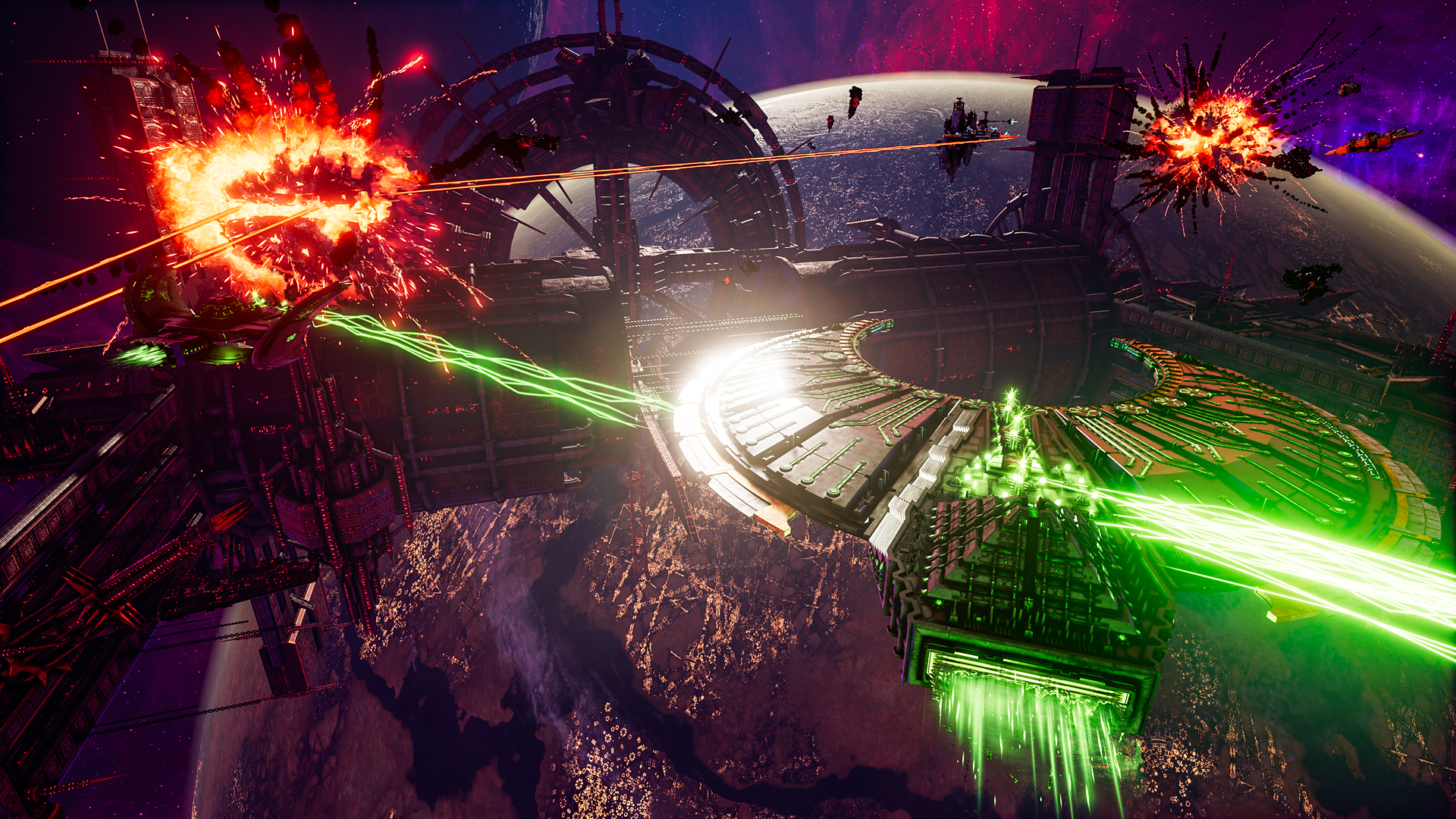 If you’re happy to trade off realism for sheer spectacle when it comes to space battles, then Battlefleet Gothic: Armada 2 (the definitive Warhammer 40,000 navy ‘em up) is going to be your happy place, because that’s the principle Games Workshop’s superbly OTT sci-fi property has always been defined by.

Despite all the cinematic 3D camera stylings, its battles play out on a resolutely 2D playing field, so it’s essentially a sea battle game with bombastic, giga-scale space stylings. And in fact, it pushes a lot of the same buttons in terms of play feel as a Total War game – you build up fleets on a campaign layer, then position them on a tactical map and shove them into the enemy to start knocking lumps out of each other.

Conflict in BFGA2 feels huge: hundreds of individual turrets batter away at each other, while fighters zip around like clouds of dust, and massive ships explode gloriously with a groaning sound like a whale reading its credit card bill.

You can play as 12 of the major 40k factions in BFGA2’s skirmish mode, while four get their own campaigns: the Imperium, with their city-sized cathedral-battleships, the very hungry caterpillars of the Tyranids, with their gnashing, gribbly space whales, angry blood boys Chaos, with their floating assemblies of spikes (in the game’s DLC), and my perennial favourites, the miserable robot skeletons known as the Necrons, who lumber about in weird, ancient egyptian death croissants.

The strategic game sometimes feels a little light, but not so much that it feels stripped down, and there’s an impressive level of storytelling and lore involved, when it didn’t necessarily have to be. The big draw, however you choose to play, and whatever you choose to play as, is that you’re guaranteed one hell of a light show.

What else should I be playing if I like this: For more epic space battles (in proper 3D space, to boot), try Homeworld Remastered. 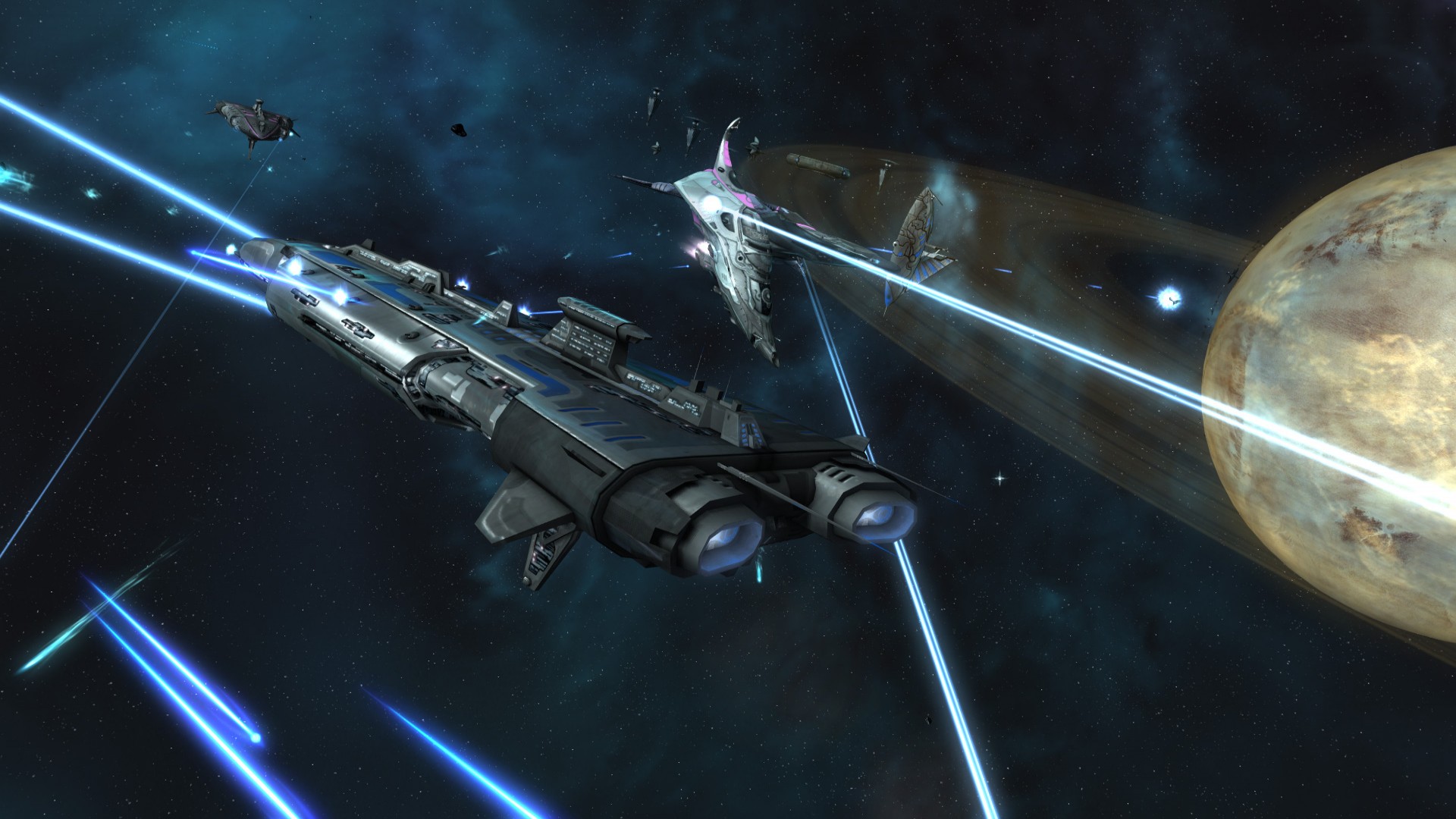 Ironclad Games’ RTS pinches the scale of a 4X game and pits massive armadas against each other in orbital laser light shows. All the diplomatic, trade and research systems borrowed from 4Xs prop up the constant war, funding and upgrading increasingly diverse fleets. At first you’ll just be throwing light attack ships at planets you want to gobble up, but eventually you’ll be surrounding worlds and enemy fleets with capital ships the size of small moons and a whole host of support vessels, carriers, tiny fighters and bombers.

Sins’ smartest trick is the use of restrictive lanes to connect worlds. It forces fleets to travel down predetermined paths, appearing in specific places. Even in space, then, there’s terrain, with the lanes’ entrances and exits acting as choke points around which weapons platforms can be constructed and fleets positioned.

What else should I be playing if I like this: There’s a fantastic Star Wars mod for Rebellion, but if you want the official thing, give Star Wars: Empire at War a try. 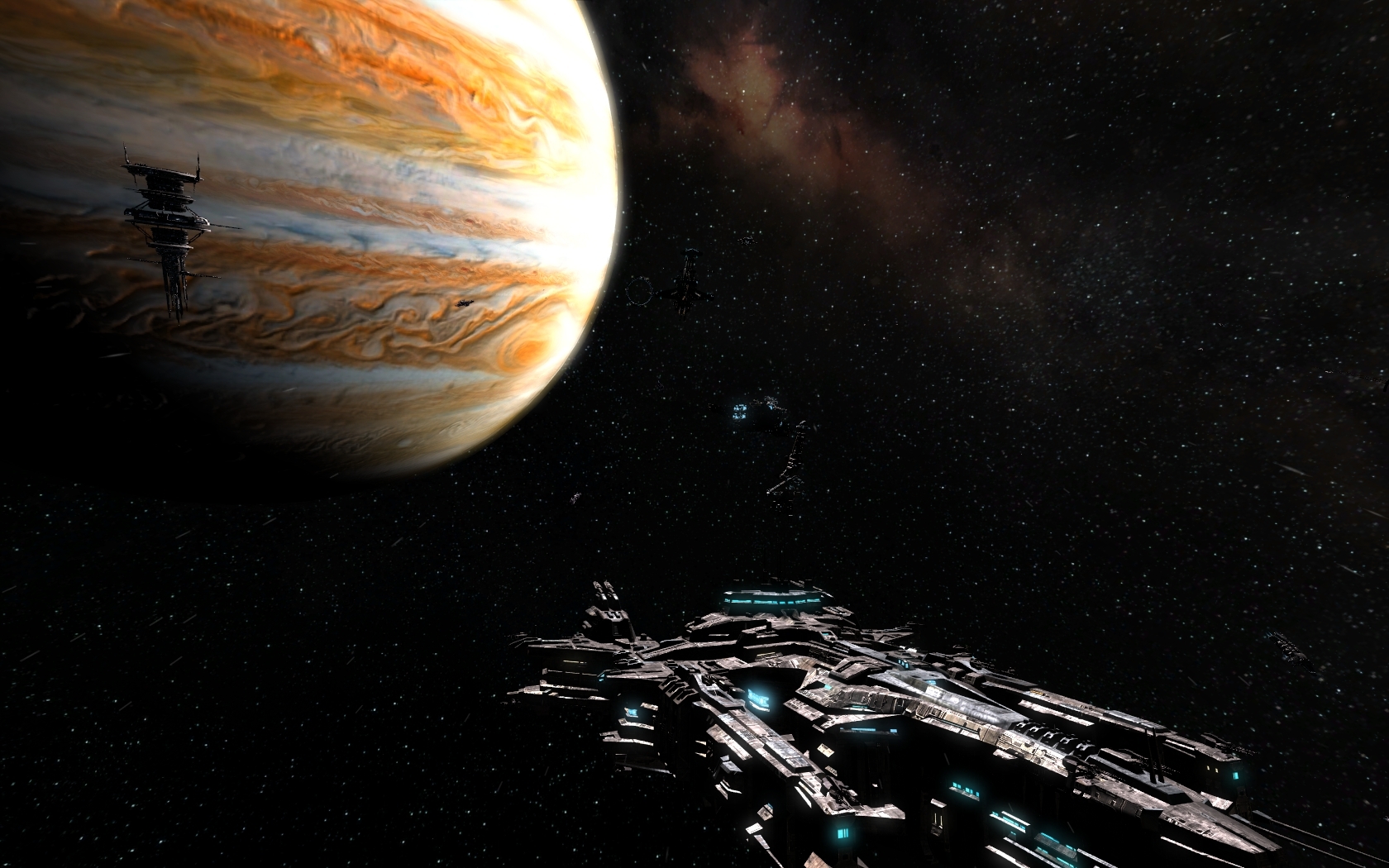 Although it started out as a rather humourless and unhurried take on Elite, the X series has carved out an impressive niche for itself over the course of 15 years or so, becoming the go-to game for space captains who’d rather explore a capitalist frontier than venture beyond anything physical.

Egosoft would no doubt argue that there’s been more to its games than first-person Industry Giant in space, pointing to the series’ motto and the prominence of fighting ahead of thinking. The truth though is that that it took a few attempts for the German developer to properly nail combat; it being pretty woeful in the original game and decidedly second-rate in X2 when compared to the then fresh-faced Freelancer. The X3 games seemed to nail it though; each release offering a more evolved OS-styled control set-up that managed to avoid falling into the FPS mouse trap while complimenting the complexities of the trading simulation underpinning the game.

Some might protest that the Albion Prelude expansion went a step too far, with too much slow-burning intricacy and not enough explanation, but by setting the X universe at war with itself ahead of the slate-cleaning Rebirth, it offered players the best opportunity in the long-running series to make good profit at the expense of others.

What else should I be playing if I like this: The usual rule of X games is to enter via the most recent, which is currently X4: Foundations. You may also want to consider immersing yourself in the industrial depths of Eve Online instead.

Keeping it real with Abby D