Moze the Gunner is the bombastic lead-spitter of the Borderlands 3 characters roster, and with her 15-tonne Iron Bear mech never far away, there is a great deal of scope for customising her however you want. In this Borderlands 3 Moze build guide, we’ve laid out 4 top-tier builds that you can use to get the most out of this mech-wielding super-soldier; one for each of the skill trees (Demolition Woman, Bottomless Mags, and Shield of Retribution) and then a bonus one for double Flamethrowers. 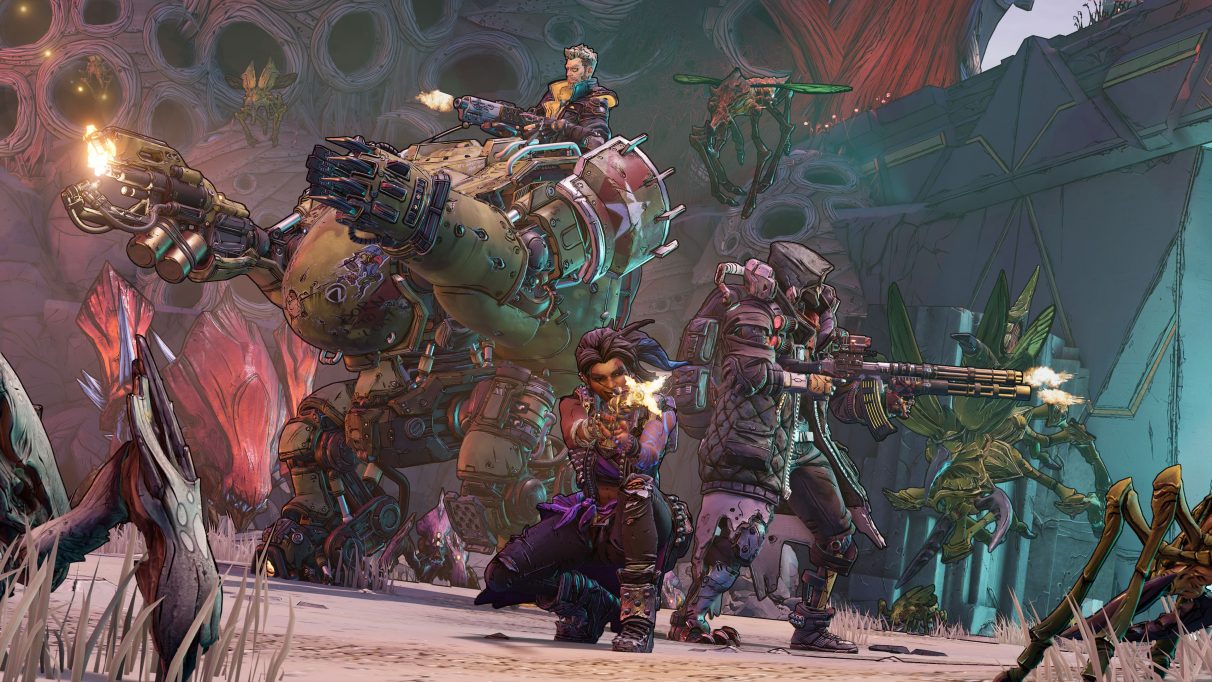 Rather than choosing between three Action Skills like the other Borderlands 3 characters, Moze the Gunner can choose between three (later six) different guns to equip her Iron Bear with, one on each arm. But there’s still a tremendous amount of scope for customising both Moze and her Iron Bear using her three distinct skill trees:

Moze is, on first glance, a pretty easy character to get to grips with. Outside her Iron Bear mech she is certainly the weakest and most vulnerable of all the Vault Hunters, but once inside her mech, there’s pretty much nothing that can match her ability to obliterate anything in sight. Each Moze build below utilises a different path through her skill trees in order to make the most of a particular aspect of her character. 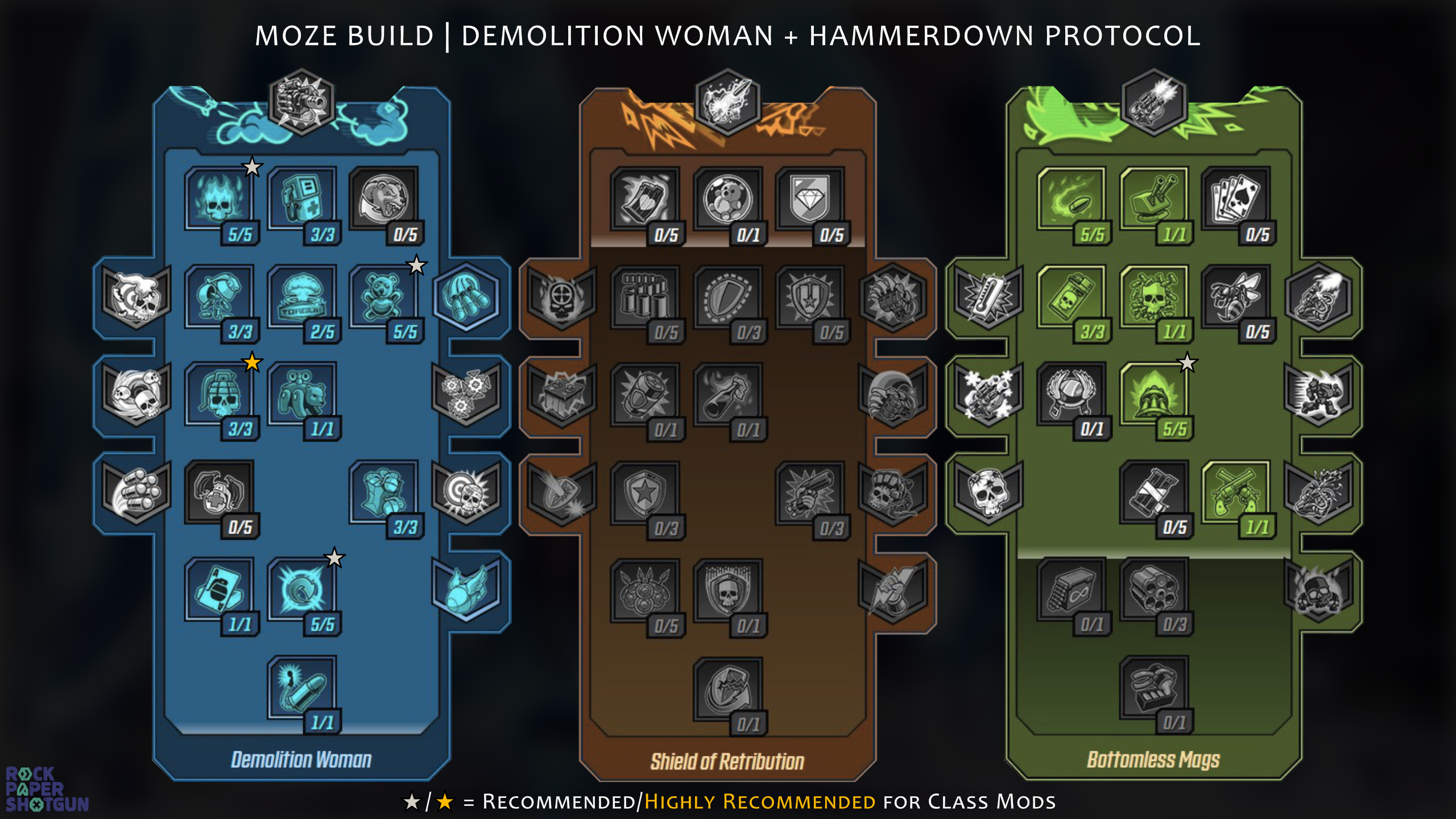 For many Moze players, I’m sure the Demolition Woman skill tree is the tree to focus on for the most bombastic, explosive fun you can have with the Gunner and her Iron Bear. This build takes full advantage of the duo’s splash damage potential by equipping both of Iron Bear’s arms with Hammerdown Protocol Rockets – massively powerful but slow-firing nuclear warheads that deal colossal damage thanks to all the other perks we’ve invested in throughout this and the Bottomless Mags tree.

As always, the first thing to do is increase your damage potential as early as possible with your first few points. So we’re putting 8 points into the Bottomless Mags tree first and foremost: 5 into Cloud Of Lead to get some Incendiary damage going, and then 3 into Stoke The Embers to further increase that Incendiary bonus. Next we’ll head to the Demolition Woman tree, and invest in Fire In The Skag Den for even more Incendiary Damage; and 3 points into Deadlines, which we’re going to do with all of these builds because you’ll want to make the most of your time with Iron Bear each time you summon it.

Now it’s time to get explosive. 5 points into Means Of Destruction followed by three points into Pull The Holy Pin gives our grenades some much-needed extra oomph, and after we pick up Auto Bear to unlock the next tier, we’ll be putting 3 points into Why Can’t I Carry All These Grenades? (which does exactly what you’d expect: more grenades). All this to unlock the final tiers of the Demolition Woman tree, which includes the fantastic Short Fuse Capstone and the essential Hammerdown Protocol Skill Augment. Now you’ll find you’re suddenly dealing ridiculous splash damage, and your only worry from now on will be not blowing yourself up along with all your enemies.

The final touch is to head back to the Bottomless Mags tree and invest right down the centre of the tree (Cloud Of Lead, Redistribution, and especially Scorching RPMs) for added utility and damage; and then finally assign our one point to Specialist Bear, which increases the damage of both our Hammerdown Rockets by an extra 25%. Stand back and enjoy the radioactive fireworks. 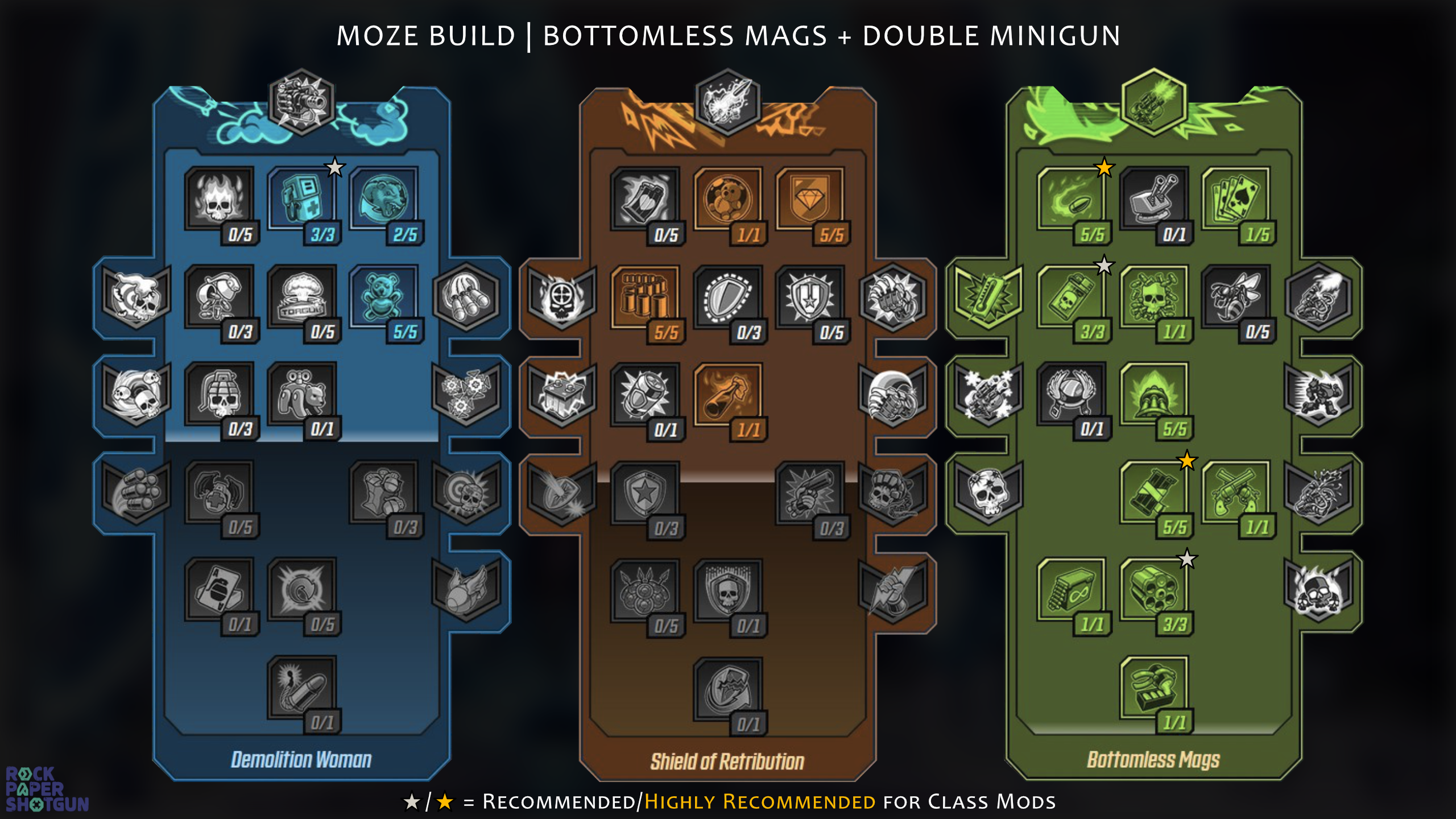 There are three ways to improve your DPS in most games: higher base damage, higher fire rate, and the ability to fire for longer. While the previous Moze build focused very much on the first method, investing heavily in the Bottomless Mags skill tree will work absolute wonders for the other two methods. Equipped with your deadly dual Miniguns, you’ll find you can fire continuously for pretty much the entire fight, both inside and outside your Iron Bear mech.

As with the previous Moze build, we’ll start by investing 5 points in Cloud Of Lead and 3 points in Stoke The Embers in the Bottomless Mags skill tree, to give us some good damage potential early on. After this, you can actually be quite flexible with the order in which you assign points in this build. We’ve put 10 points in Demolition Woman and 12 in Shield of Retribution just to give us some extra mech utility and survivability, and it’s more or less a case of just assigning these points whenever you feel like it in amongst your gradual levelling of the Bottomless Mags tree.

What’s quite nice about this particular build is that we unlock the weapons we’ll be taking to the rest of the game very early on – by Level 7, in fact. The Let Off Some Steam Skill Augment gives your Miniguns higher damage as heat increases, and gives us the ability to fire them for longer, which suits our needs perfectly. After this you’ll want to invest down the centre of the green tree, letting our DPS soar with pickups like Scorching RPMs, Specialist Bear, and “Click, Click…” – while also making it less and less likely that we’ll ever need to reload thanks to The Iron Bank, Some For The Road, and the glorious Capstone that is Forge.

This is a build all about never letting go over the fire button. Moze absolutely excels at this, and you’ll find that once you’re far enough into this build, your Iron Bear will make short work of pretty much any enemy unfortunate enough to cross your path. 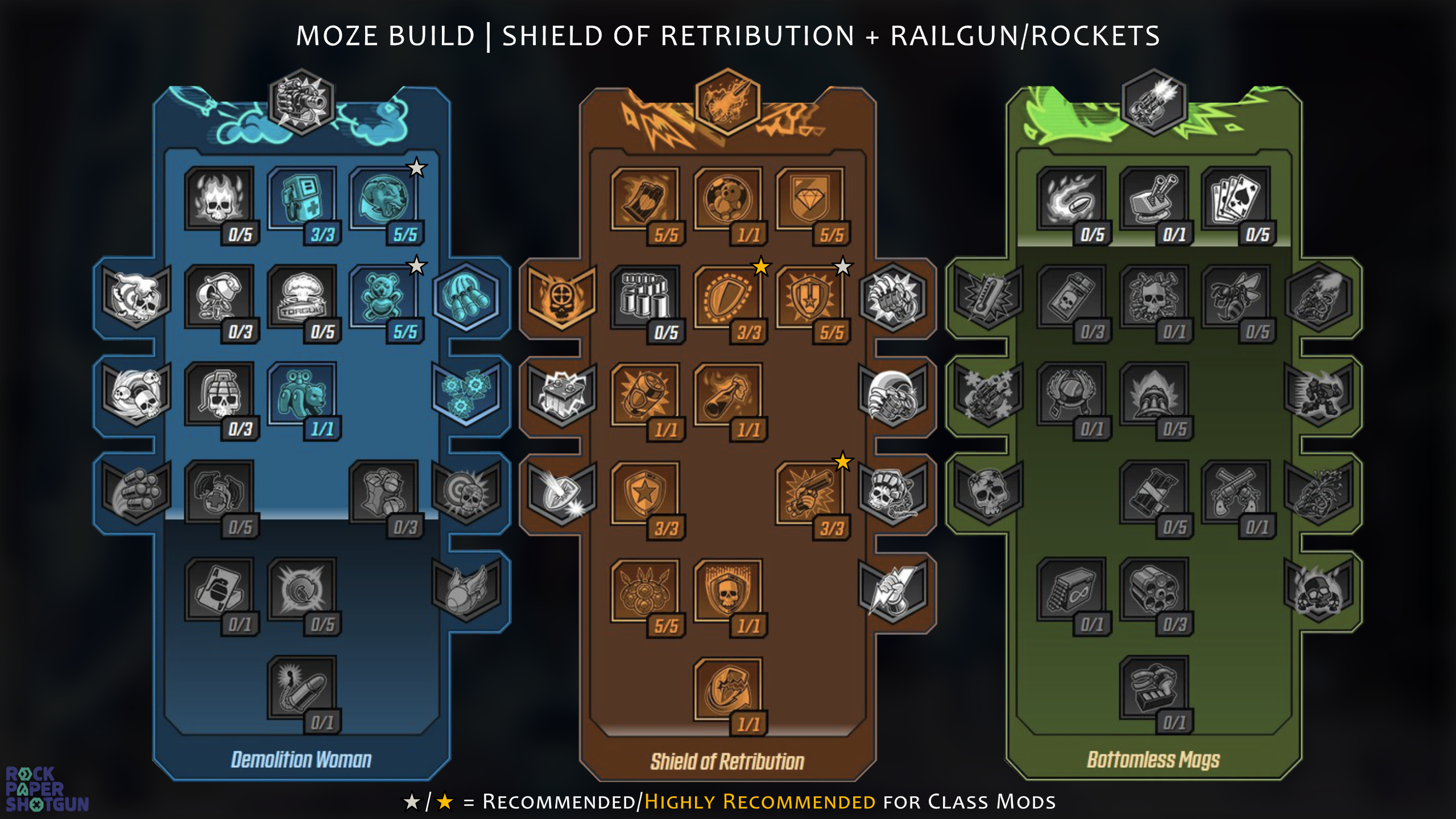 Much talk is made of Moze being the Borderlands 3 character with perhaps the highest overall damage potential – but what’s also true is that if you want to take her a different route, she can become one of the tankiest. Which shouldn’t be that surprising, seeing as she lives in a walking tank about half the time. This Moze build focuses heavily on the Shield of Retribution skill tree in order to boost your shield to truly insane levels, while also keeping your damage up to scratch with your Railgun and Vanquisher Rocket Pods.

This time round, we’re not investing any points at all into Bottomless Mags, which means early on this build might not feel as powerful as the others on this list. Rest assured, she’ll make up for it later. For now, place 5 points into Armored Infantry and 5 into Selfless Vengeance, which grant us both survivability while our shields are up, and as much extra damage as we can give for the time being. After this, pick up all of the 1-cost skills: Experimental Munitions, Security Bear, and Full Can Of Whoop-Ass (preferably in that order). The first of these gives some extra Incendiary damage upon every crit, while the others start to beef up our shield game.

But that’s not all. 3 points into Thin Red Line gives us massively increased shield levels at the cost of health, and synergises perfectly with Desperate Measures, which ups our Gun Damage based on how low our Health is (up to 50%!). These are the two skills that really make this build what it is, and they’re the skills you’ll want to overcharge if at all possible with a good Class Mod.

After this, head to the Demolition Woman tree just to pick up that lovely trio of Deadlines, Grizzled, and Stainless Steel Bear to lengthen our time spent in the Iron Bear (and unlocking our Vanquisher Pod Missiles to boot). And after this, head back to the orange tree and max out every skill (except for Drowning In Brass). With the combination of Thin Red Line, Behind The Iron Curtain, Phalanx Doctrine, Force Feedback, and Tenacious Defense, you’re basically never going to run out of shields. Which allows you to relax in your mech and blast anything that moves with your Railgun and Rockets combo. 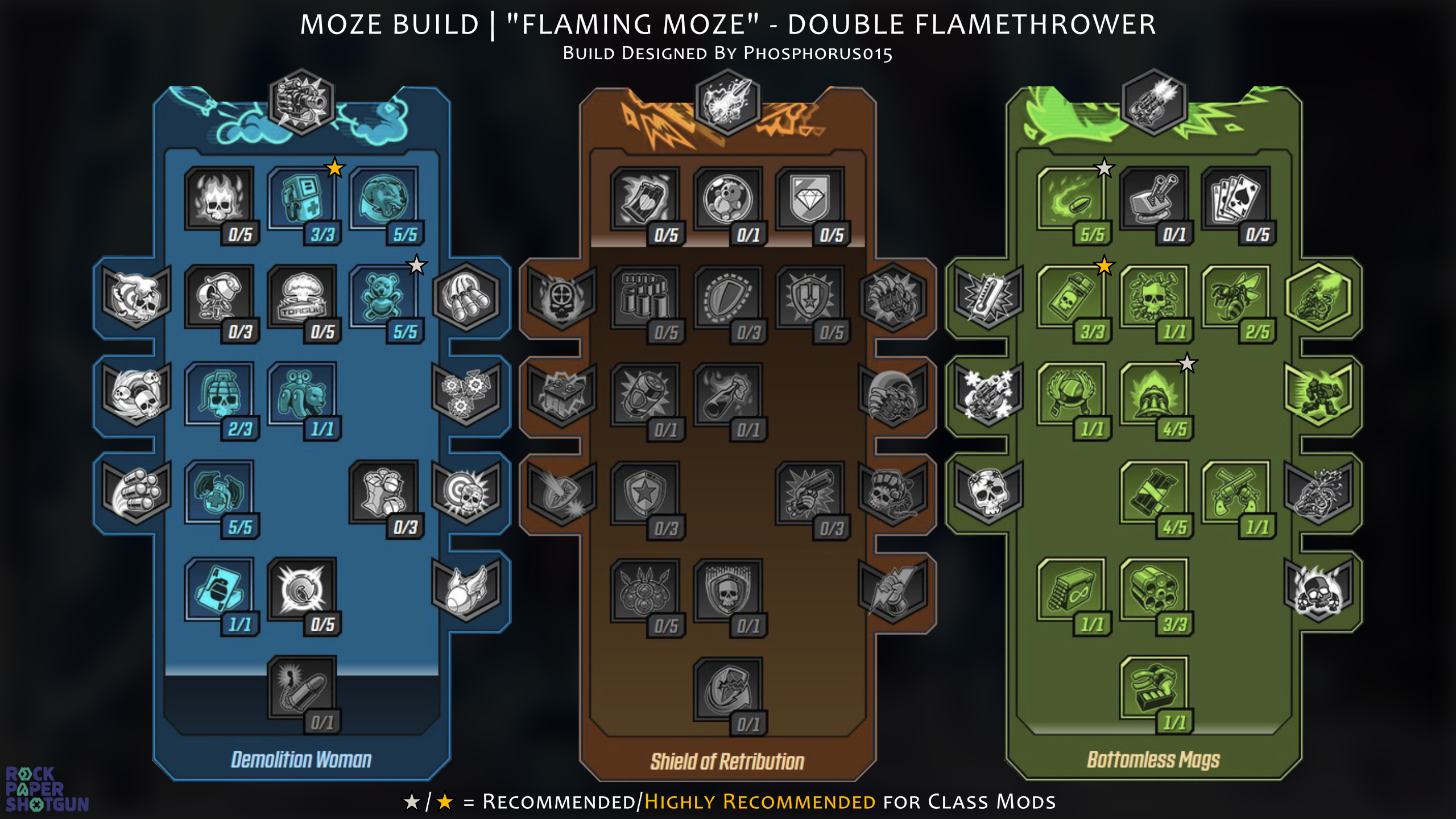 Finally, here’s a Moze build that was not made by me, but by Reddit user Phosphorus015 who did what, let’s face it, everyone should try at some point while playing Moze: they created a build all about dual-wielding Flamethrowers. And though it did sweeten the deal that another Reddit commenter came up with the perfect name for this build using an excellent Simpsons reference that instantly took me back to my childhood, I’m including this build also because it’s just a damn strong close-range damage build.

Again we’re investing heavily in Bottomless Mags, all the way down to the Forge Capstone. The old familiar Cloud Of Lead/Stoke The Embers combo gives us great early damage, while also unlocking our Flamethrowers very early on. Beeline straight to Specialist Bear to make the most of your dual-wielding flame-throwing Iron Bear, but then that’s the point where I’d head over to Demolition Woman and start building up that tree with the again-familiar-by-now combo of Deadlines, Grizzled, and Stainless Steel Bear to lengthen the time spent in our Mech (if you learn anything from this page, I’m guessing it’s that you should probably invest in these three skills no matter what your Moze build).

While Phosphorus015 is clearly focusing on the double Flamethrowers (plus the double Fuel Economy Skill Augments which further increases your fuel efficiency and time spent in the Iron Bear), they’ve also gone a fair way down the more explosive grenades route of Demolition Woman with the Pull The Holy Pin, Vampyr and To The Last perks, which gives you some extra utility outside of your Mech. Overall this is a surprisingly versatile build despite its focus on the up-close-and-personal barbecuing of enemies. 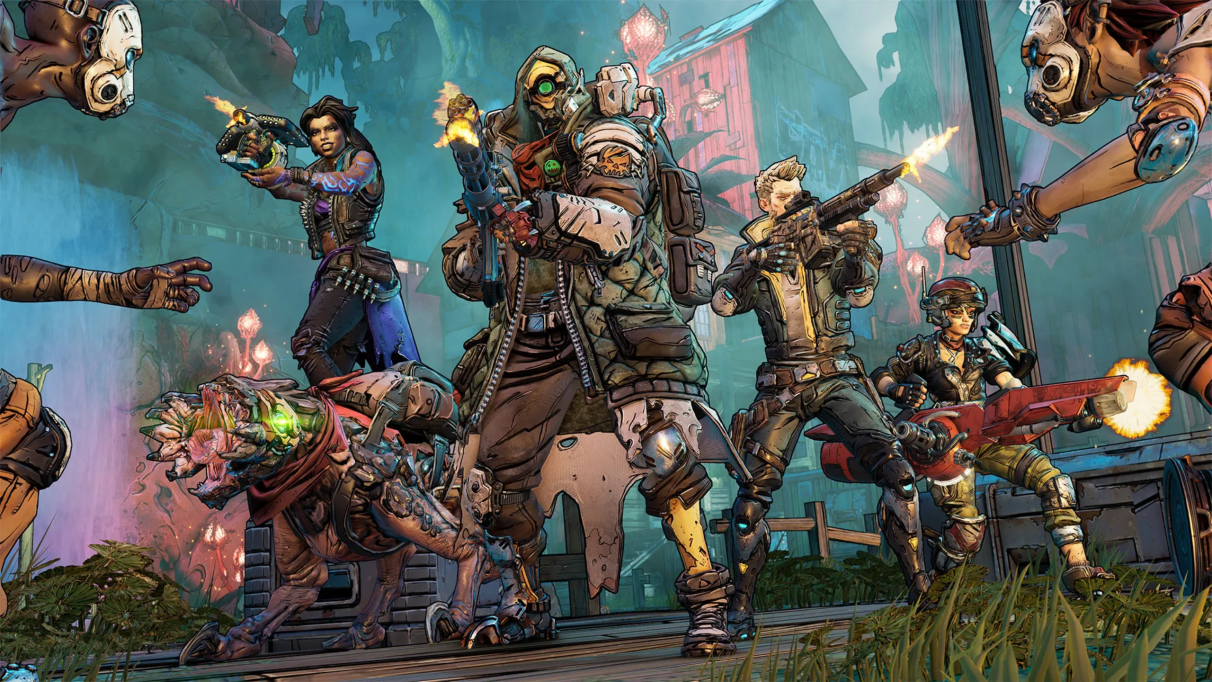 That’s probably as good a place as any to finish up this Borderlands 3 Moze build guide. Hopefully one of the four builds above have at most given you a path to follow, and at least given you food for thought as to how you can carve your own way through Moze’s the Gunner’s three distinct skill trees.