It’s been a long time coming, but Razer’s Raptor 27 monitor is finally here – and hoo boy does it impress. When I first saw the prototype of this 27in, 2560×1440, 144Hz, FreeSync screen at CES last year, I oohed and ahhed at its striking design, metal cable tidies and fabric-wrapped display. Now, having tested the final model over the past couple of weeks, I’ve been making exactly the same noises at its lovely IPS panel. Not only is it one of the most colour-accurate 1440p monitors you can buy today, but it’s also got proper HDR support and has been fully certified as one of Nvidia’s G-Sync Compatible monitors. Is it enough to break into our best gaming monitor list, though? Here’s wot I think.

In terms of picture quality, the Razer Raptor is right up there with my current best 1440p monitor picks, the AOC Agon AG273QX and the MSI Optix MAG272CQR, offering deep, vibrant colours straight out of the box. When I tested the monitor on its default settings with the brightness set to 100%, for example, my X-Rite i1 DisplayPro calibrator returned a practically perfect sRGB colour gamut coverage result of 99.9%.

Even more impressive, however, was its DCI-P3 colour gamut coverage score of 93.6%. Whereas the sRGB gamut is used to test a monitor’s general colour accuracy, the wider DCI-P3 gamut is used to measure a monitor’s HDR chops. Now, a lot of high-end HDR monitors need to hit at least 90% of this gamut to meet various industry standards and VESA specifications, so the fact that the Razer Raptor’s coverage is well over this figure is good news indeed – especially when VESA’s DisplayHDR standard doesn’t technically require a monitor to hit any kind of DCI-P3 coverage whatsoever. 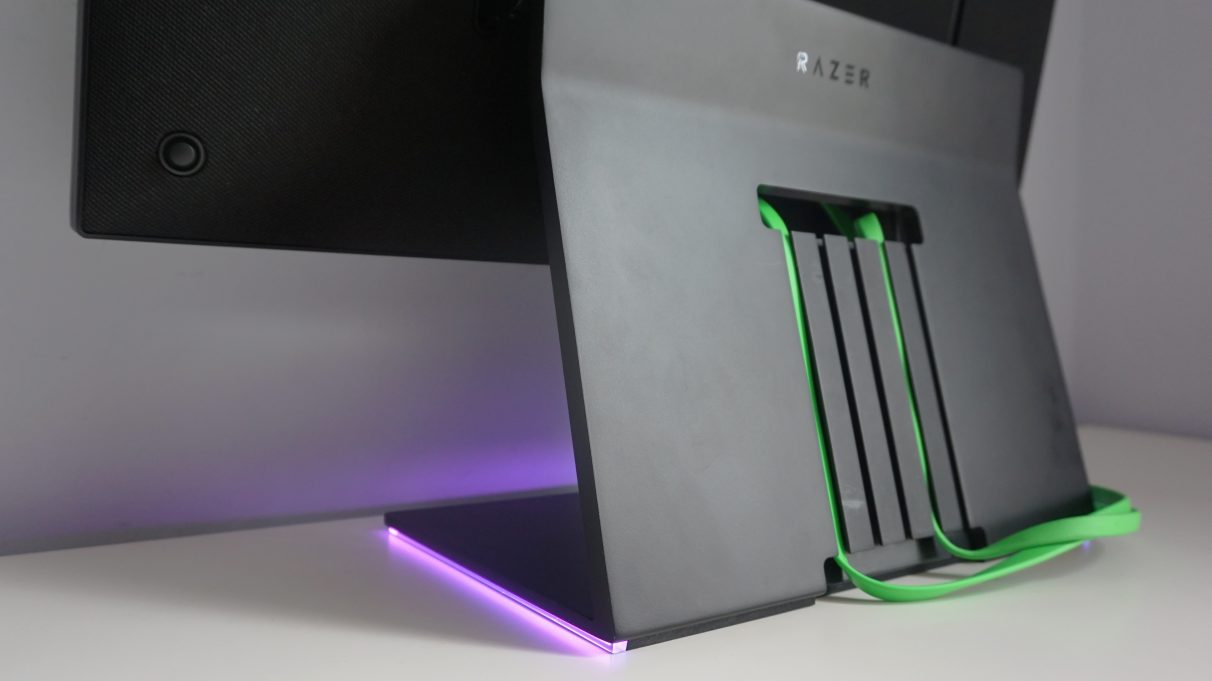 I do love a good bit of cable management…

In fact, it’s one of the highest DCI-P3 scores I’ve seen for a while, as even the AOC Agon AG273QX (which is also a VESA DisplayHDR 400 certified display) only covers around 88% of the gamut, as does the MSI Optix MAG272CQR. Whether you’ll notice that extra 5% is up for debate, of course (probably not if I’m being completely honest, as colours still look pretty damn fine on all three of these gaming monitors), but if you want to be sure you’re getting the absolute best of the best, then it’s probably fair to say that the Razer Raptor goes above and beyond most of its 1440p competition.

I also recorded a lovely high contrast ratio of 1174:1 on the Raptor, ensuring lots of detail in darker, shadowy scenes in games and photos, as well as a peak brightness of 357cd/m2 with HDR turned off (which is more than enough for everyday use), and around 470cd/m2 with HDR turned on. The latter is roughly in line with the AOC and MSI, and packs a reasonable enough punch when playing games in HDR, but it’s not quite the eye-searing experience you’ll find on other high-end HDR monitors such as Nvidia’s 1000cd/m2 G-Sync Ultimate screens. 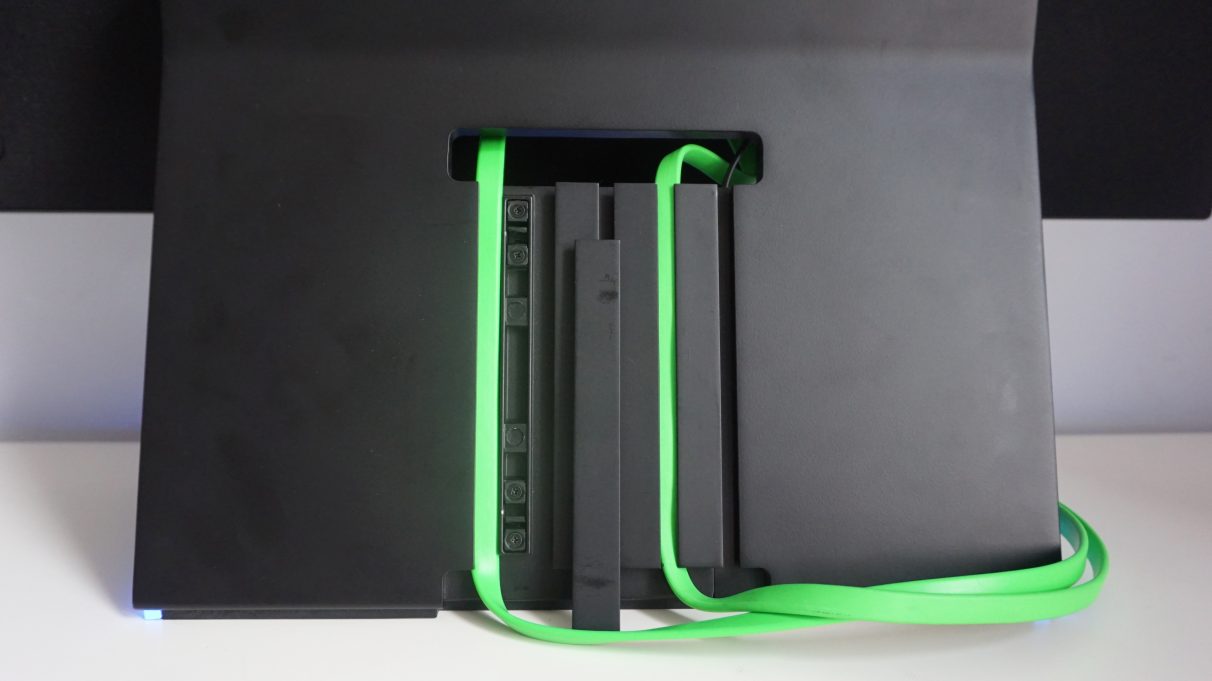 Getting the cables to lie completely flat in their respective grooves can be a bit tricky, but fortunately each plate fixture can be easily popped off and on again when attaching new cables.

Still, short of paying thousands of pounds / dollars for that kind of HDR experience, the Raptor still does a pretty good job with it regardless – especially when it doesn’t involve hours of faff getting it to work, either. It’s not quite as hassle-free as the AOC Agon AG273QX, which just worked straight off the bat, but the Raptor definitely involved less faff than a lot of other HDR monitors I’ve tested recently.

Indeed, all I needed to get it working properly in Assassin’s Creed Odyssey, for example, was to make sure the HDR option in the Gaming section of the Raptor’s onboard menu was switched on. Left off, the screen appeared horribly washed out when you’ve only got the in-game HDR enabled, so make sure that’s turned on at all times when playing in HDR. For Final Fantasy XV, however, I had to switch on Windows’ HDR settings before the game’s HDR luminance menu became available. Still, it was fairly painless all told, and every game I tried with HDR looked very pretty indeed. 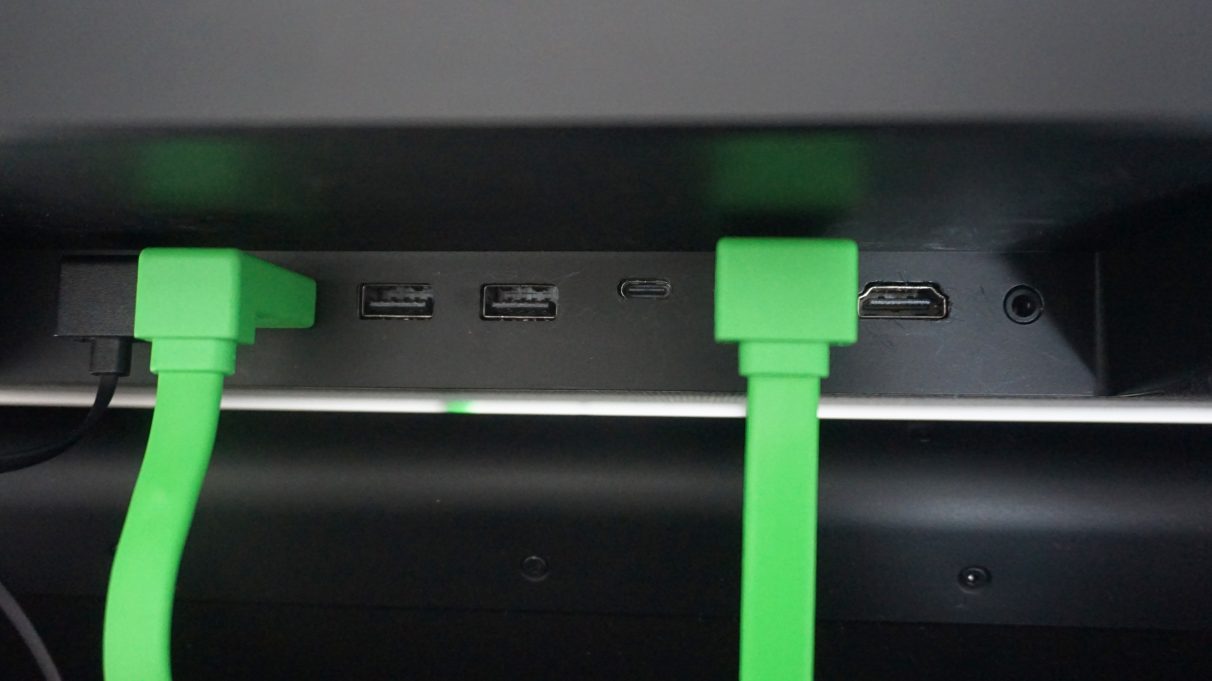 The Razer Raptor comes with a decent selection of ports, including one HDMI 2.0b input, one DisplayPort 1.4 input, a USB-C port and two USB3.2 Gen 1 ports.

The only mildly disappointing thing about the Razer Raptor was its average black levels. Measuring 0.30cd/m2 according to my calibrator, that’s quite high for an IPS display and more than double what you’ll get on the AOC. It’s not the end of the world, all told, as darker areas of the screen still looked reasonably deep and inky in games and photos alike, but it’s still a bit of a shame considering how good the rest of its panel is.

Either way, there’s a lot to like about the Razer Raptor, both in terms of its panel and its wider design. I’m still very much in love with its rear cable grooves, for example, and I’m pleased to see the little plates holding each of its lime green cables in place are much easier to pop on and off than they were on the prototype model I saw last year. Sure, you’ll probably never see it once you’ve got the monitor set up, but just knowing they’re all neatly aligned round the back still brings me a lot of satisfaction. The same goes for the fabric on the back of the monitor, too. You’re not going to see or touch it very often, but it does make reaching for its onboard menu control round the back just a bit more pleasant than normal. 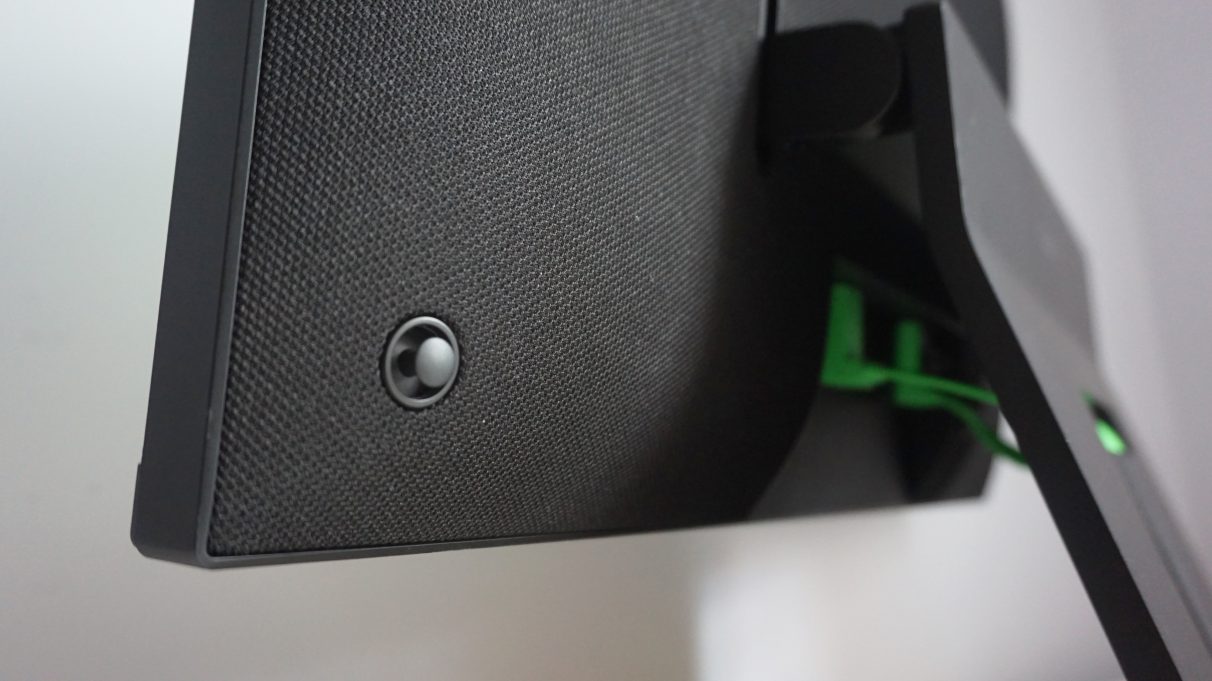 The rear of the Razer Raptor 27 is covered in black fabric, giving it a premium feel compared to the plastic chassis of its various rivals.

Alas, all these extra details do come at quite a cost compared to other 1440p gaming monitors. Whereas the AOC Agon AG273QX currently costs £400, for example, the Raptor chucks another £300 on top of that, going for £699 / $699 at time of writing. That’s a lot for a monitor like this, especially when many of today’s larger, ultrawide monitors go for roughly the same kind of price. Heck, I could probably understand it if the Raptor was a proper Nvidia G-Sync monitor, as the cost of adding Nvidia’s proprietary G-Sync chip, plus Razer’s RGB Chroma lighting and all of its various design gubbins would definitely crank up its price quite a bit compared to its AMD Freesync rivals.

But this isn’t a proper G-Sync display – it’s a Freesync one that’s just G-Sync Compatible, which is Nvidia’s way of saying that the monitor’s built-in variable refresh rate technology (which automatically matches your monitor’s refresh rate to the number of frames being spat out by your graphics card for smooth, tear-free gaming) will provide just as good an experience on Nvidia graphics cards as it will on AMD ones.

Technically, all Freesync monitors are G-Sync compatible (with a small ‘c’) – it’s just the ones with a big ‘C’ Compatible that Nvidia have certified internally. Indeed, the AOC Agon AG273QX isn’t an official G-Sync Compatible display (yet), but I had no problem whatsoever getting its variable refresh rate tech to work with my Nvidia graphics card. As such, there’s no real need to pay so much extra for a big ‘C’ Compatible display, as there are plenty of other screens out there that offer the same experience for a lot less. 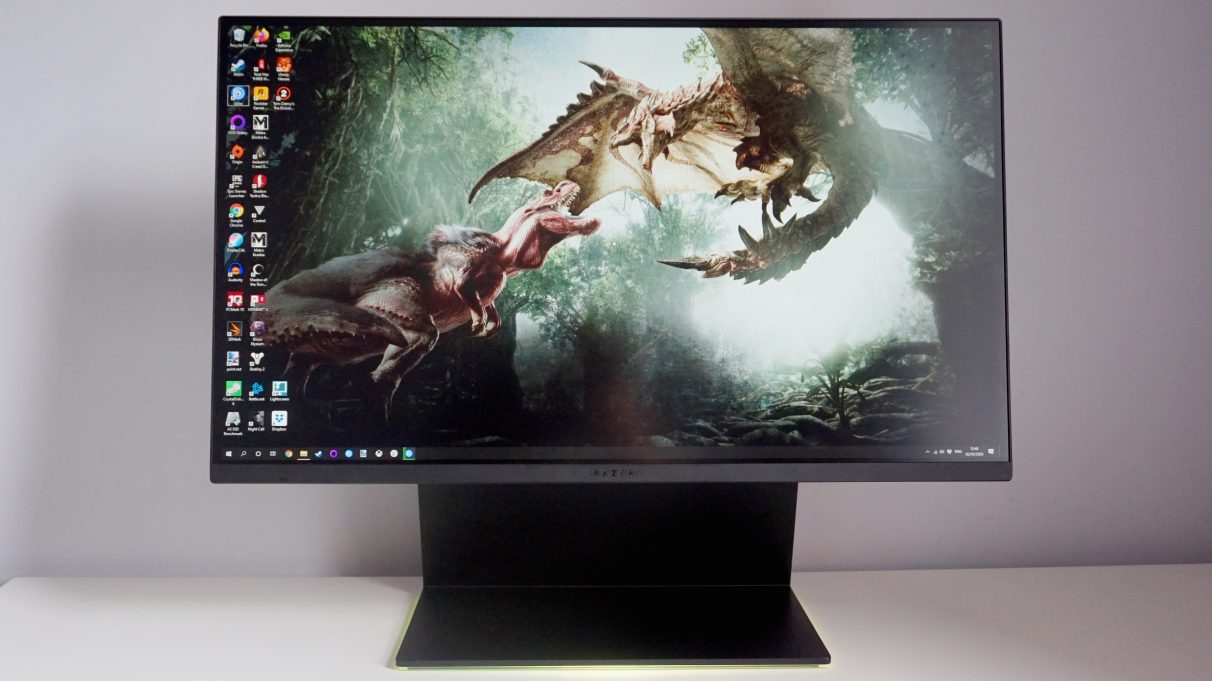 Of course, it wouldn’t be a Razer monitor without a bit of Chroma RGB lighting round the aluminium base now, would it?

As a result, it’s hard to recommend the Razer Raptor when the AOC Agon AG273QX (and the MSI Optix MAG272CQR, for that matter) is so much cheaper. As much as I love the Raptor’s design and everything going on round the back, demanding another £300 for it is a big ask, especially when a lot of its best features aren’t something you’ll actually see day-to-day. As that old saying in Jurassic Park goes, it would seem Razer “were so preoccupied with whether or not they could, they didn’t stop to think if they should“.