We’ve known for some time now that both the PlayStation 5 and Xbox Series X will be powered by the next generation of AMD Navi GPUs, but thanks to our friends at Digital Foundry who have just revealed the full spec of Microsoft’s Xbox Series X console, we now have a much better idea of just how powerful they’re going to be and what that means for their eventual PC equivalents – and if the Nvidia RTX 2080-levels of power inside Microsoft’s new console is anything to go by, AMD could finally have a proper Nvidia killer on their hands come the end of the year.

I should, of course, note that the GPU inside any given console box is quite different from the types of graphics card that go inside our PCs. They’re a different shape, have different cooling mechanisms and utilise several aspects of their unique console design to help them achieve their respective power targets. As you’ll see from Digital Foundry’s full Xbox Series X reveal, the Xbox Series X is no different. There are aspects of the Series X’s SSD, memory and AMD Zen 2 CPU that all play a role in getting its custom Navi GPU to hit its 12 teraflops target, but there are still some intriguing hints to be teased out here, particularly when it comes to AMD’s ray tracing chops.

But first, let’s take a very brief look at the Series X’s key specs. The AMD Navi GPU sitting at the heart of Microsoft’s new console has 52 compute units (there are actually 56 in total, but four have been disabled to help increase production yield, according to Digital Foundry) clocked at 1825MHz and 16GB of GDDR6 memory clocked at 14 Gbps. It has quite an unusual memory bandwidth, admittedly, with 10GB of its 16GB memory pool able to deliver up to 560GB/s, while the remaining 6GB offers up to 336GB/s, but this is tied up with the console’s special custom asymmetrical memory performance, which is a feat simply not possible on a PC. 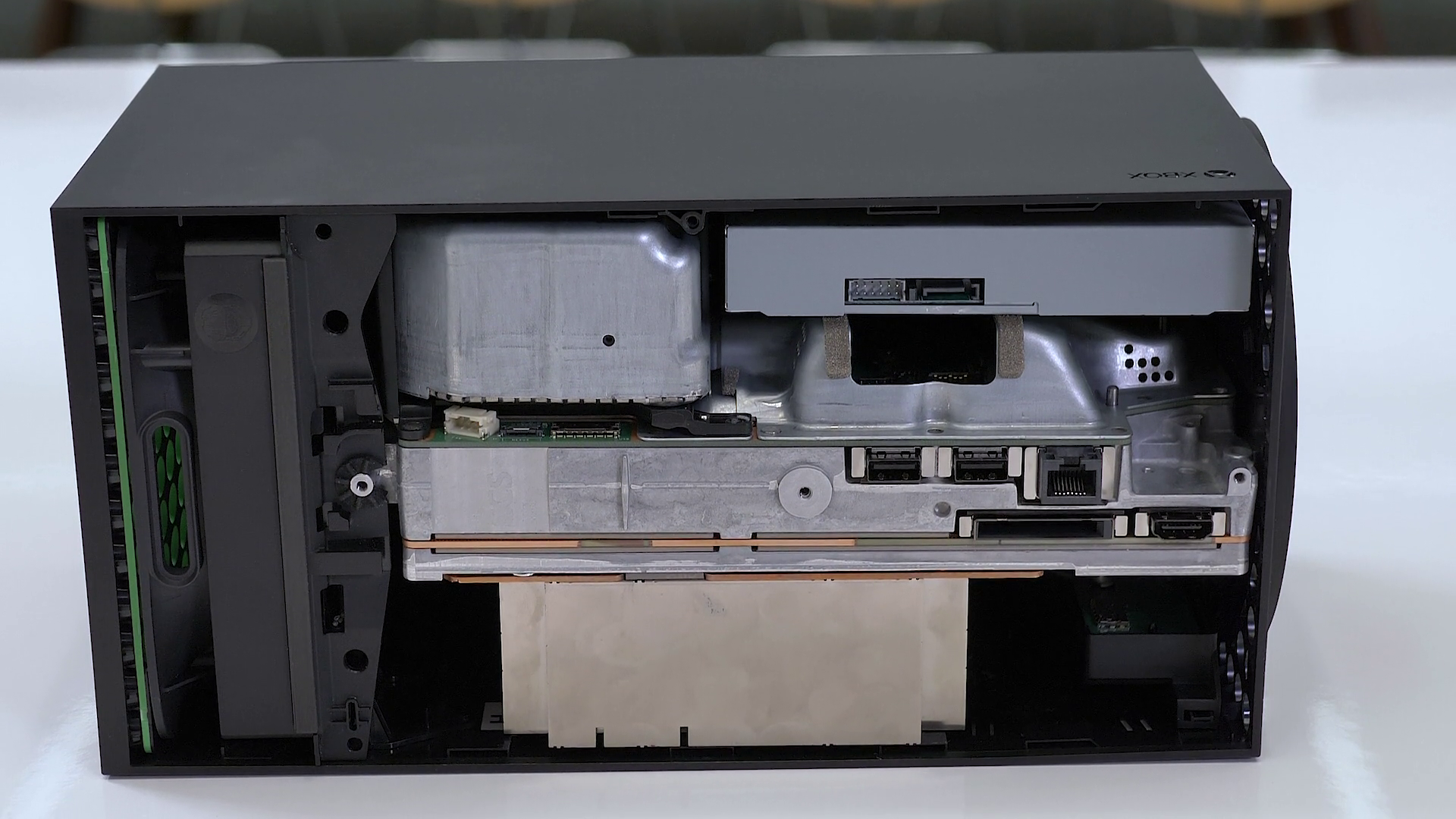 The Xbox Series X is quite large by console standards, but still much smaller than a mini form factor PC.

Already, then, we’re looking at something substantially more powerful than the RX 5700 XT (although this isn’t exactly a surprise, given the RX 5700 XT is a 1440p-oriented card, not a 4K 60fps proposition like the Xbox Series X is intended to be), and here’s hoping that the speed, power and efficiency improvements ushered in by AMD’s new RDNA 2 architecture will see its overall performance exceed what was possible on the Radeon 7, too.

Indeed, when Digital Foundry saw an early Series X conversion of Gears 5 in action, with all of the internal quality presets set to the equivalent of PC’s Ultra settings and with Unreal Engine 4’s brand-new software-based ray tracing switched on, they said it was already delivering “equivalent performance to an RTX 2080” – and that was on an unoptimised version of the game that had been strung together in two weeks.

That’s impressive stuff for a GPU that fits inside such a dinky little console (all right, a rather large console compared to previous efforts, but still dinky in comparison to a mini form factor PC), and it bodes well for what AMD have lined up for their desktop counterparts – especially when it comes to that all-important ray tracing performance.

Like Nvidia’s RTX GPUs, AMD are using hardware-accelerated ray tracing techniques here to render realistic lighting and shadow effects in real time on the Series X, and it will have full support for the latest DXR Tier 1.1 standard. It still sounds like there will be a drop in performance compared to no having no ray tracing switched on at all, but Digital Foundry say that the Series X’s fixed console design should theoretically allow for more aggressive optimisation and innovation from developers further down the line. Whether these improvements will translate to PC remains to be seen, of course, but it stands to reason that if developers are improving their ray tracing implementations to run on console, then we should still see some small, incremental benefits on AMD’s desktop Navi GPUs. 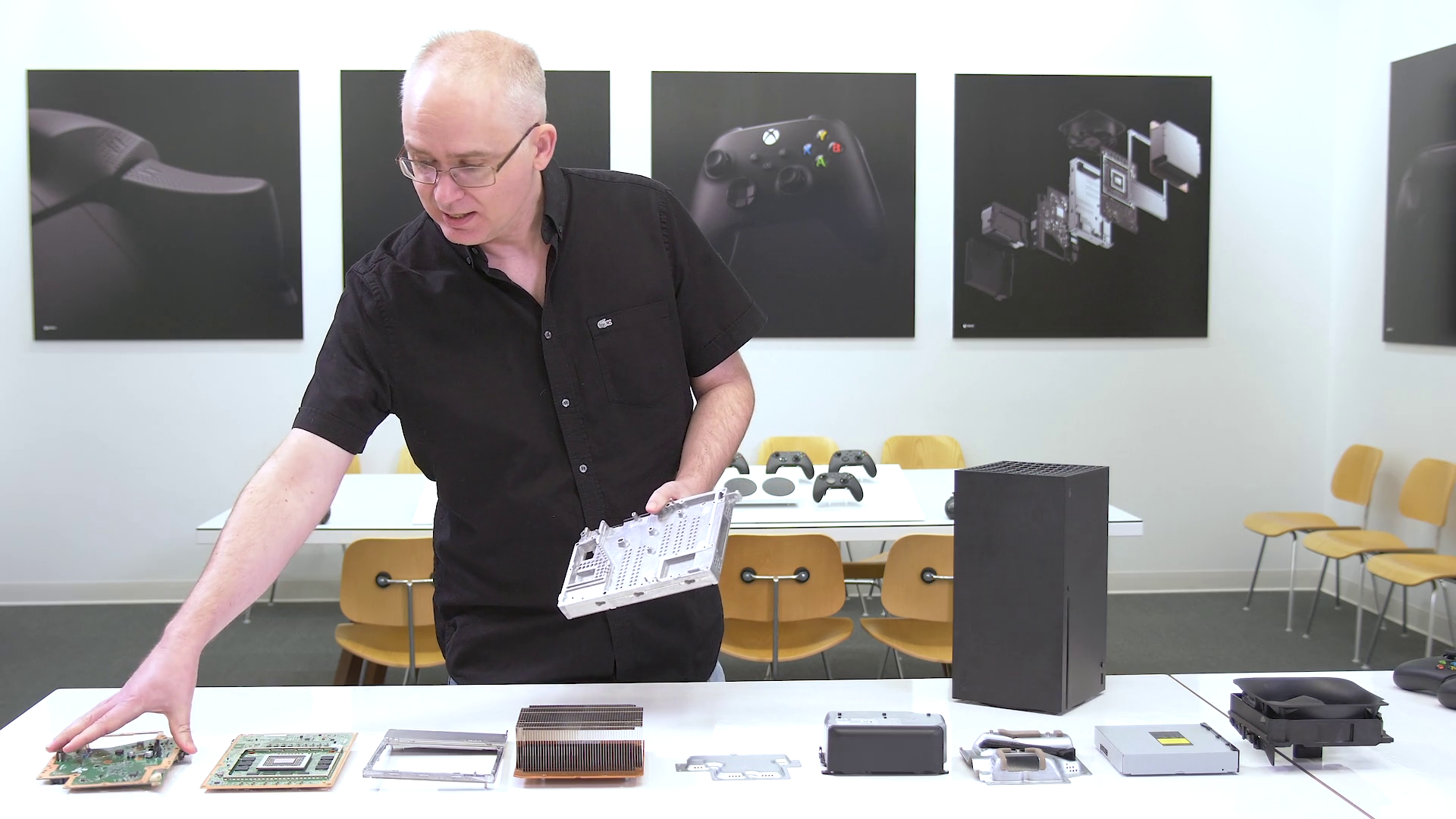 Microsoft didn’t reveal too many details about the exact nature of the Xbox Series X’s ray tracing capabilities during Digital Foundry’s visit to their Redmond HQ, admittedly, but they did show an early Minecraft DXR tech demo that apparently looks extremely similar to Nvidia’s Minecraft RTX demo I saw last year. At the moment, Minecraft RTX is one of the most ambitious ray tracing implementations I’ve seen so far, so to have that running on a console GPU in real-time has definitely got my interest piqued.

As I said earlier, there are some clever things going on inside the Xbox Series X to help achieve all this, including its asymmetrical memory performance that just isn’t possible on PC, as well as some nifty architectural tricks that allow its diddly 1TB NVMe SSD drive to function as an extra giant memory reserve. But the key takeaway for us over in PC land is this: after the slightly disappointing launch of the Radeon 7, AMD’s ‘Big Navi’ GPUs look like they’re finally going to give Nvidia’s top-end RTX cards a real run for their money. Whether they’ll be true Nvidia killers remains to be seen, of course – especially if Nvidia end up launching their so-called next-gen RTX 3080 card before AMD even get their foot out the door – but if what Digital Foundry have seen so far holds true for AMD’s desktop Navi cards, then the race for the ultimate bestest best graphics card could get very interesting indeed over the next 12 months.