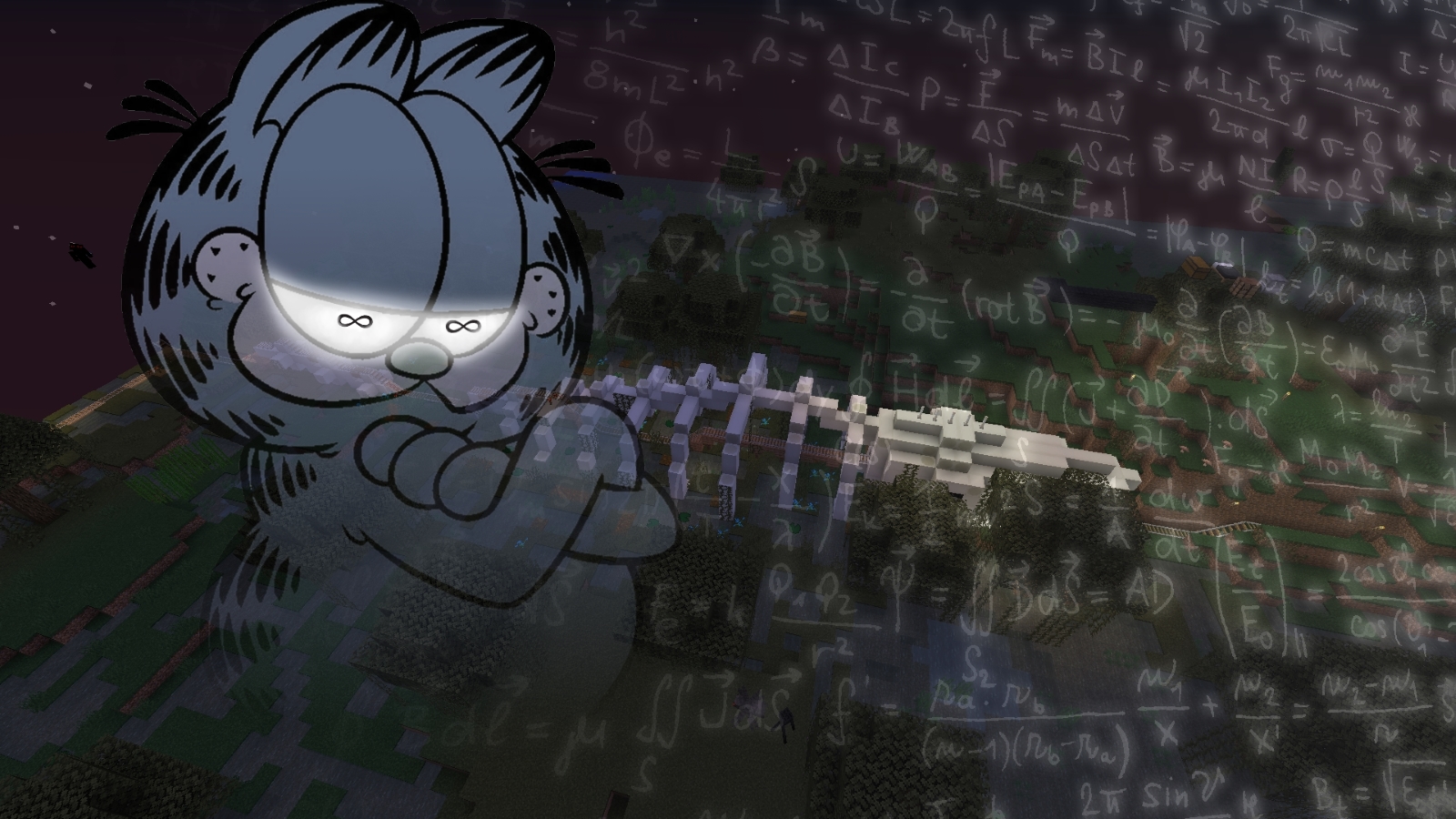 Over the last couple of weeks, I’ve been posting photographs from an archaeological expedition into the RPS Minecraft server. Having left the place to go fallow last October, I had assumed it had been quietly abandoned, as often happens to these multiplayer sandboxes when their founders move on.

But I should have had more faith in the server’s denizens, for it turns out that this strange place didn’t fall into dilapidation at all, when the winter set in. Quite the opposite: using the mod powers I granted them all as a farewell gift, it seems the occupants quietly got on with reshaping the entire world into a sprawling monument to their collective, gestalt whimsy. Here are some of the things I saw in the final part of that expedition:. 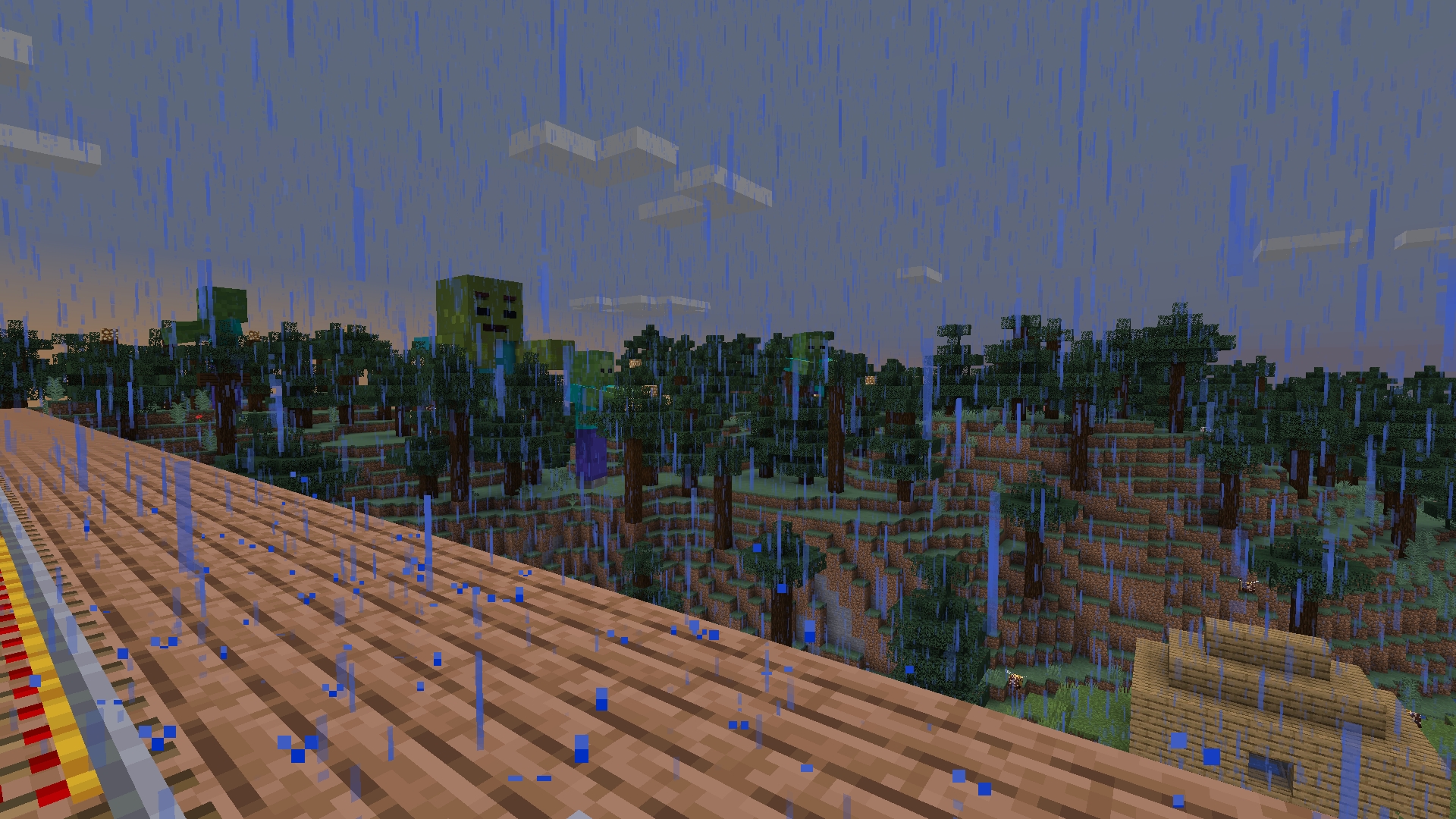 Still recovering from passing through the digestive system of a train, I continued to follow the rails into a rain-lashed sunset. I had thought us to be heading east, but clearly my bearings had become confused, for though I am no great navigator, I know where the sun sets. As the rackety-clackety tracks continued to bear us away from the relatively sanity of the spawn settlement, we passed a wooded hill where gigantic effigies of zombies roamed beneath the gathering twilight. 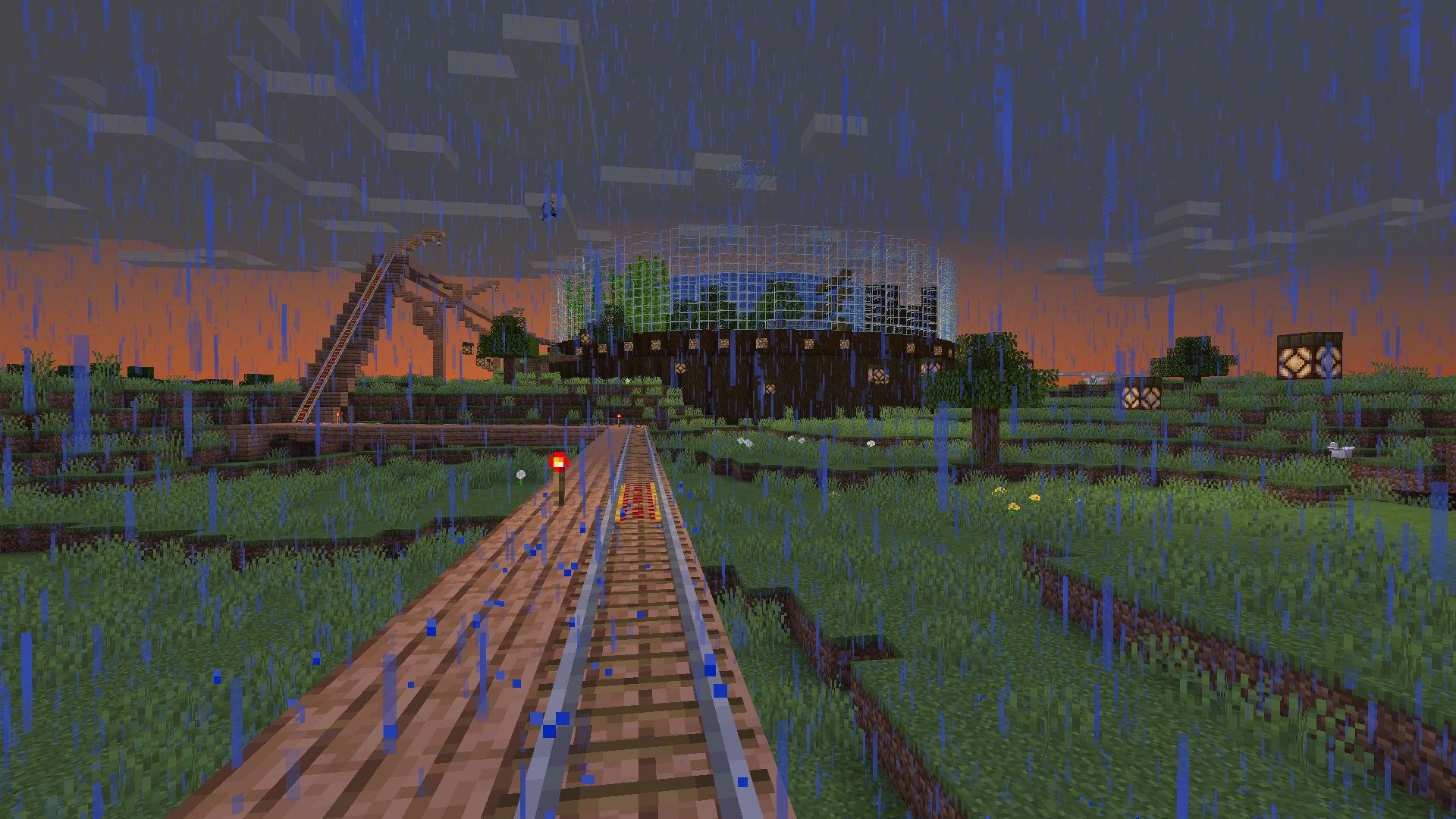 A way further on, the track jinked north to pass around a huge, drum-shaped tower of glass, seemingly with water inside. As our carts ascended onto an elevated railway, we peered inside and saw a zoo of sorts – different biomes had been constructed in arc-shaped segments around a cylindrical core, where dolphins swam among arches of coral. It seemed the zoo had been in disrepair for some time: wolves had broken free inside and, having consumed many of their neighbours, were now staring hungrily at the dolphins through the glass. 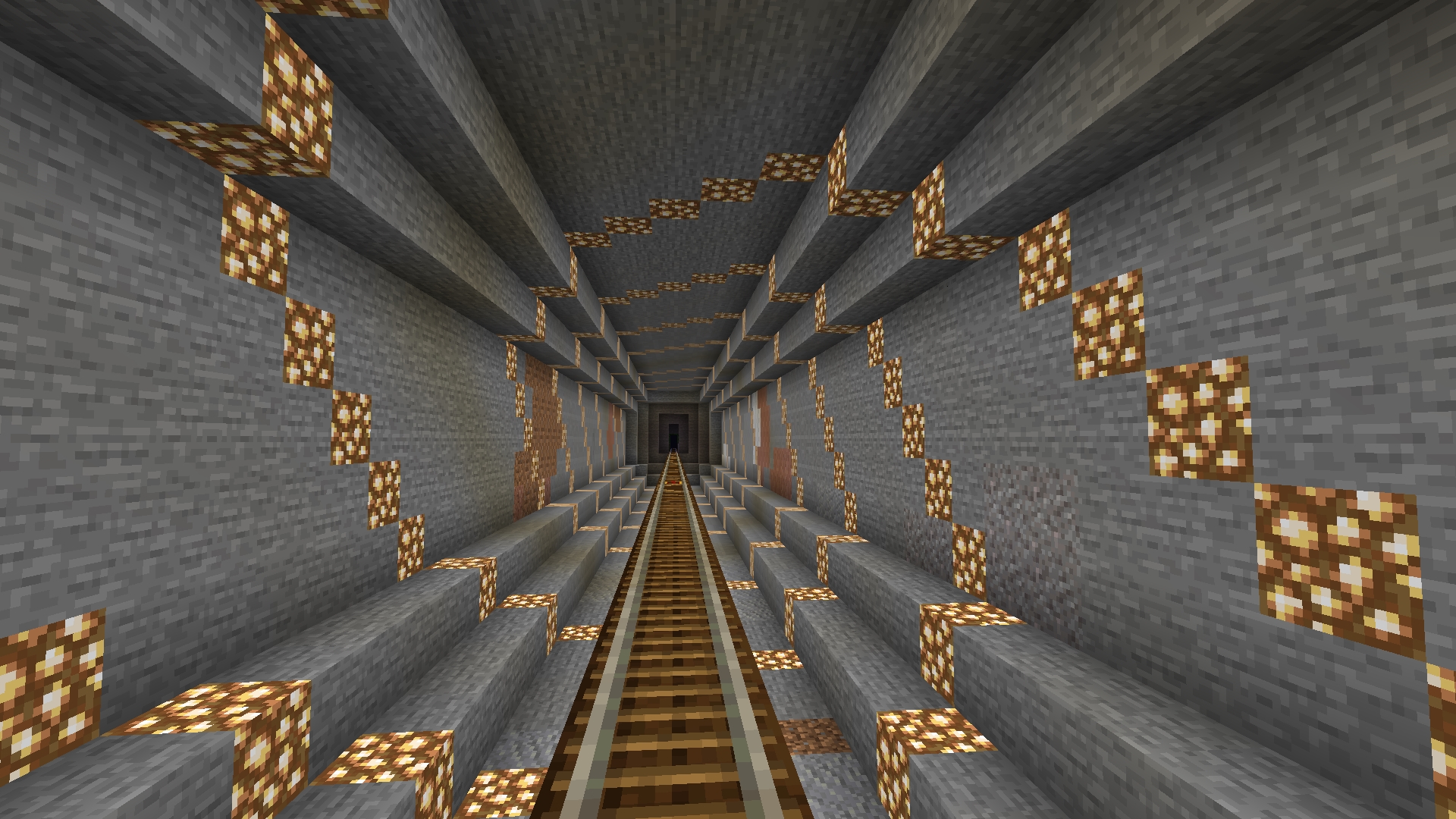 After continuing across the western plains for a long while, the railway plunged abruptly into the side of a hill, where it began to pass at high speed through what I can only describe as a simulation of a migraine. It went on and on, and I had to close my eyes after a while. 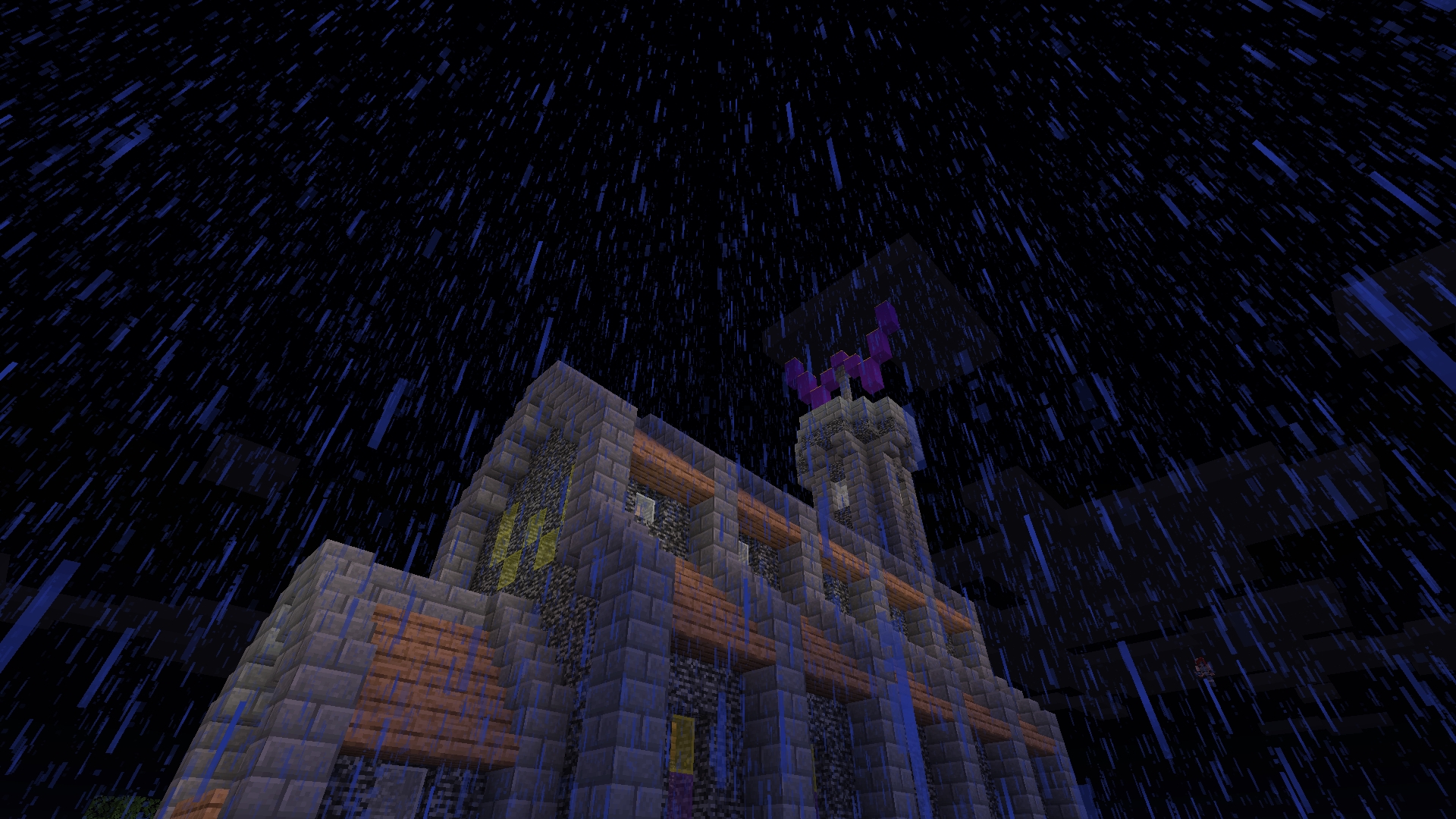 Mercifully, the tunnel ended at last, and spat out our procession of carts into a broad, bowl-shaped valley. It was filled from wall to wall with yet another deserted stone metropolis, bordered at its western edge by a great birch forest. I didn’t get many shots of this city, but I did take this candid shot of a church seemingly devoted to… Waluigi? I did not want to aim my camera too directly at it, however, lest an echoing “waaah” came from within: this place had the air of somewhere haunted, and I did not want to know by what. 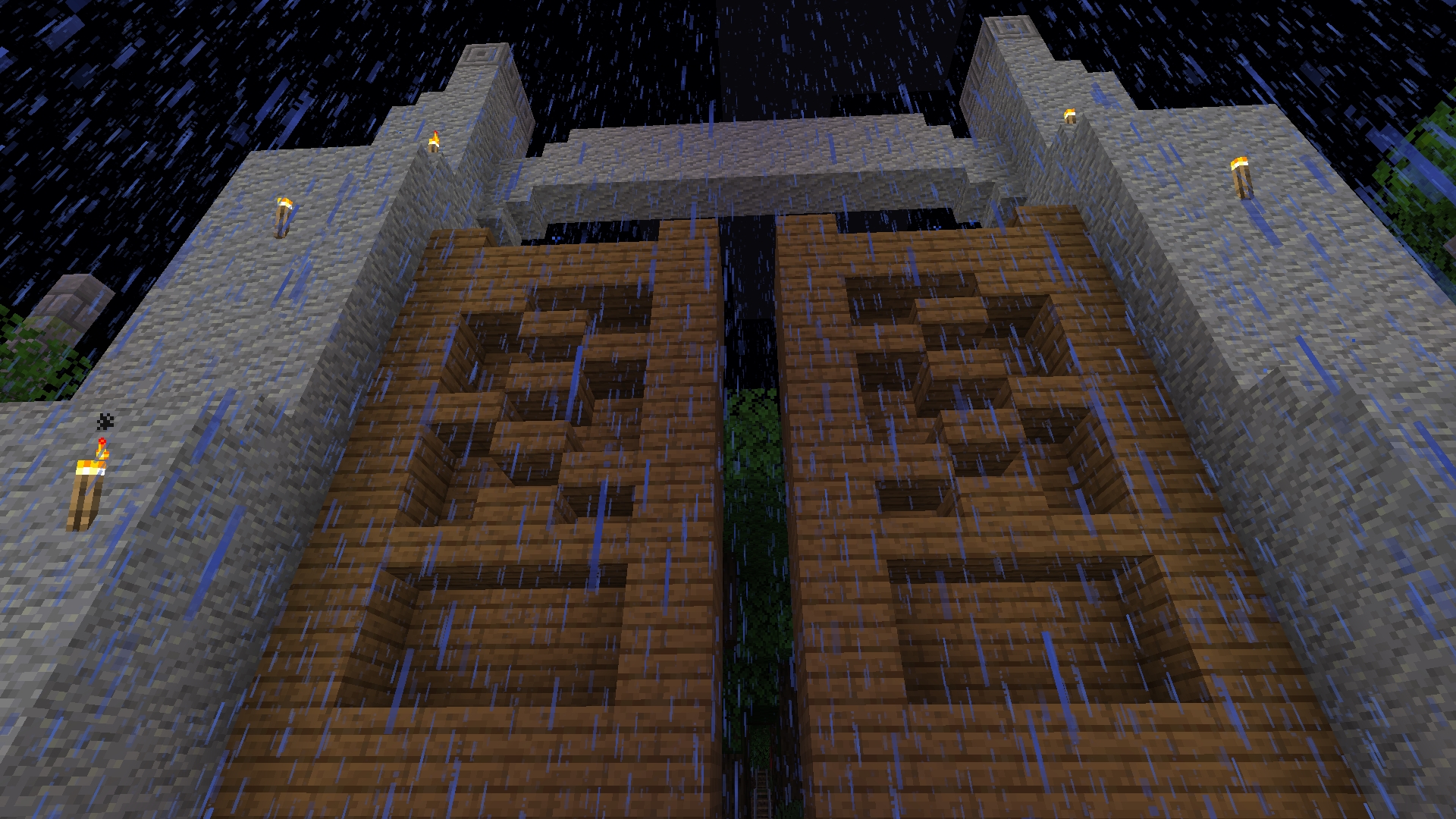 As we left the city behind and proceeded into the forest under the cover of darkness, an immense shape became visible in the gloom ahead. It looked like a gate of some kind, but we could see no wall, nor even the remnant of one, for it to affix to. Then I saw the torches glowing on its posts, and all became clear. Someone had, of course, recreated the entirety of Jurassic Park in the depths of the wood. 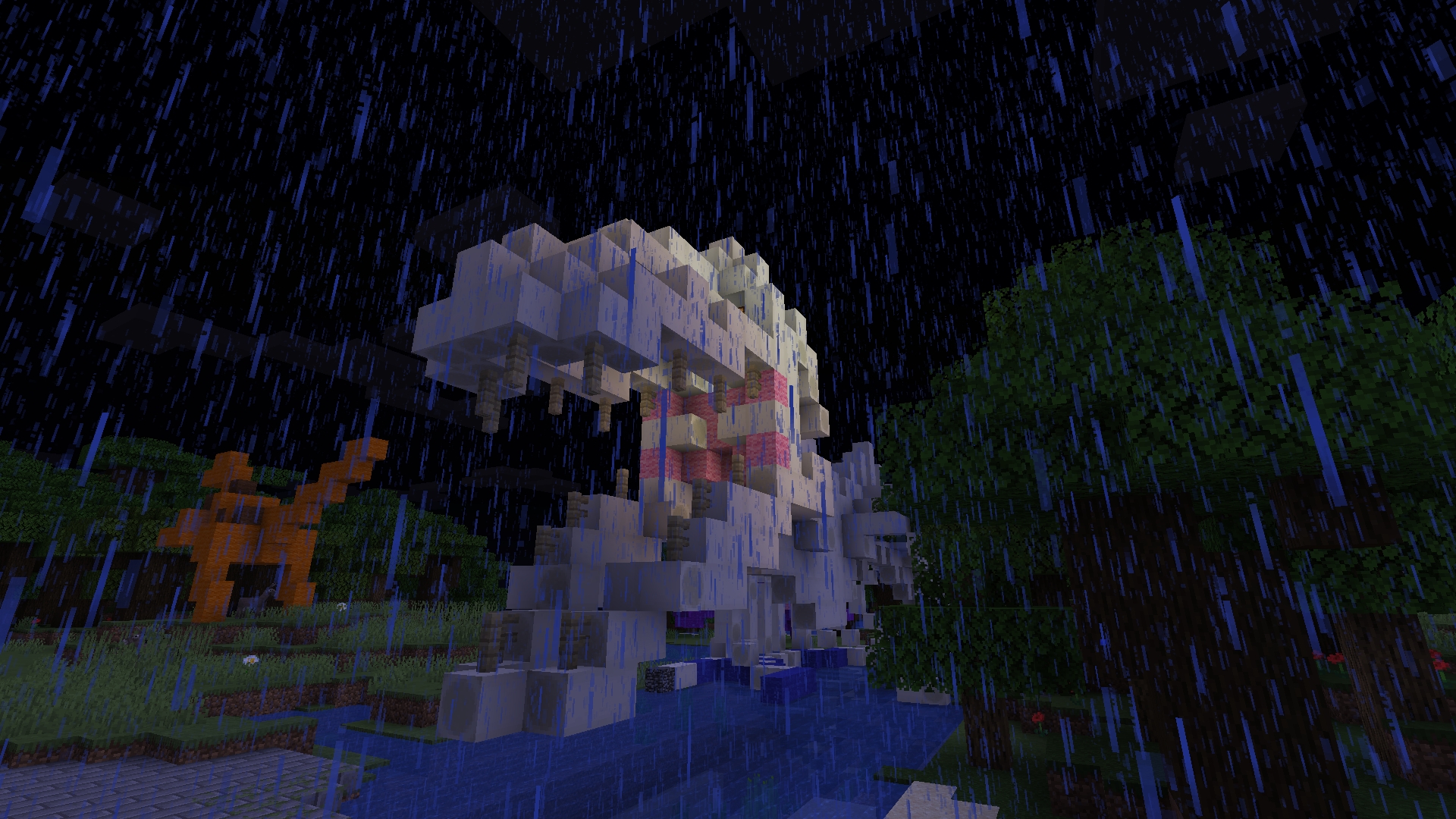 There were loads of dinosaurs made out of coloured concrete, and it reminded me of this charmingly rubbish Norfolk tourist attraction I used to visit as a kid. Only more convincing, somehow. I particularly liked this rendition of the naughty albinosaurus from the recent movies that the Parks & Rec guy did after he became a musclebound bellend. 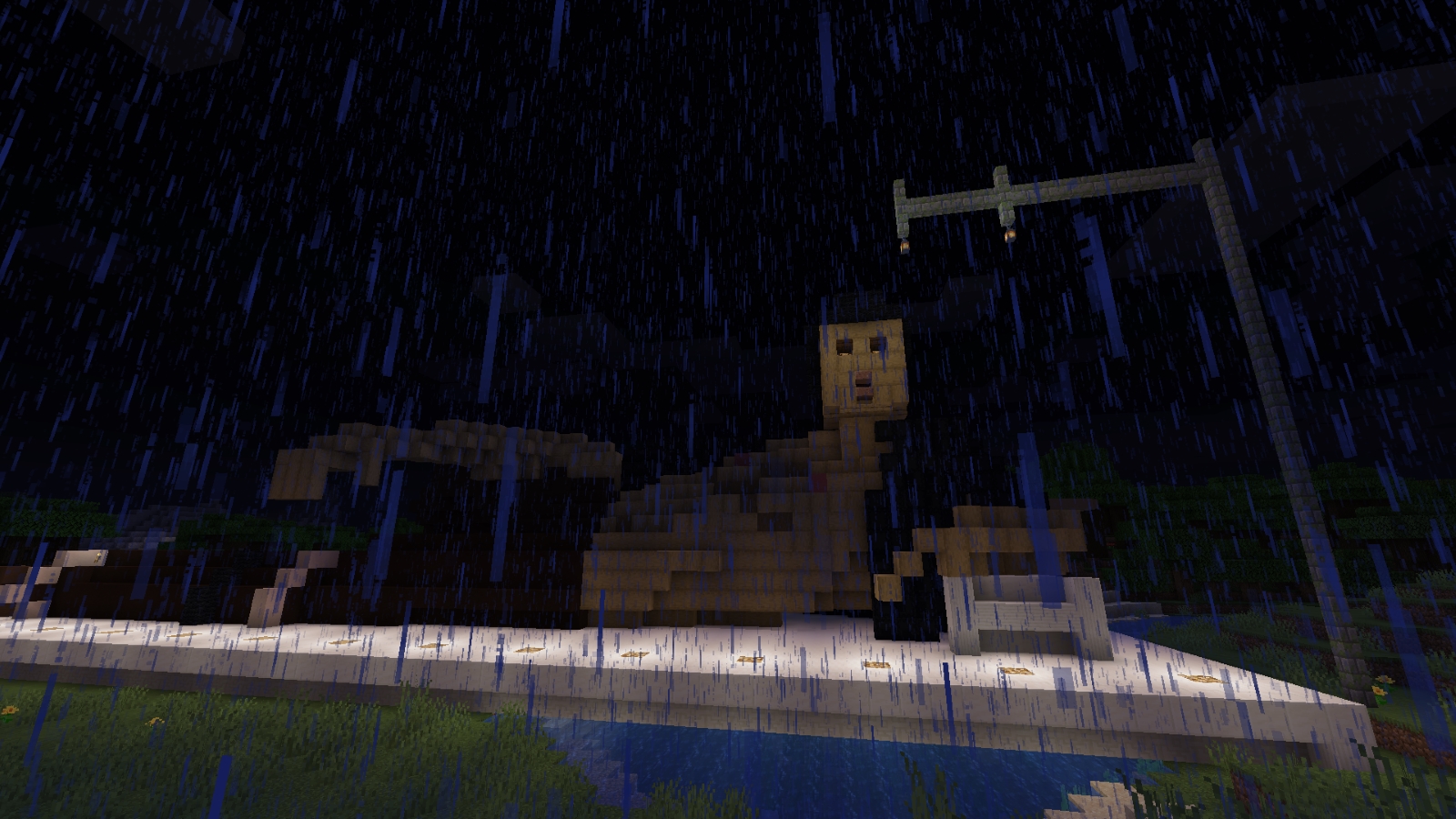 The highlight of Jurassic Park, however, was this extremely eerie reclining Goldblum, which had gigantic Ozymandian energy as it gazed forlornly out into the rainy dark with piss-hole eyes. 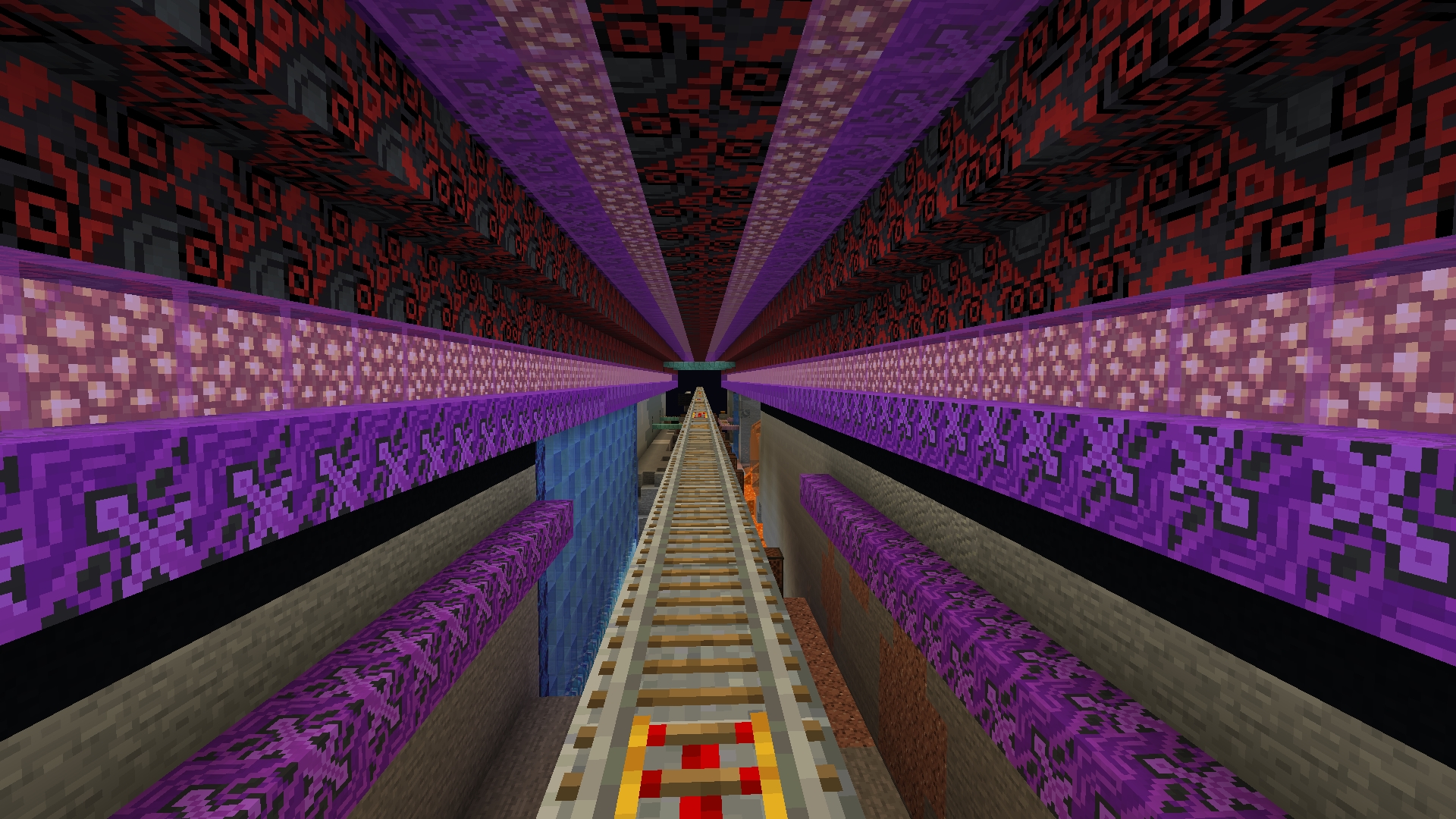 After passing the titanic ‘blum, the rails – for they were still going – plunged north unexpectedly, and descended into another mountain for more, even-more-intense headache time. This particular eye-busting tunnel was complete with moving parts: diamond-armoured skeletons that pistoned into place like rows of vigilant guards as our carts passed by; and minecarts full of unknowable cargo that clattered and shunted through a Goldbergian tangle of machinery in the chasm below us. 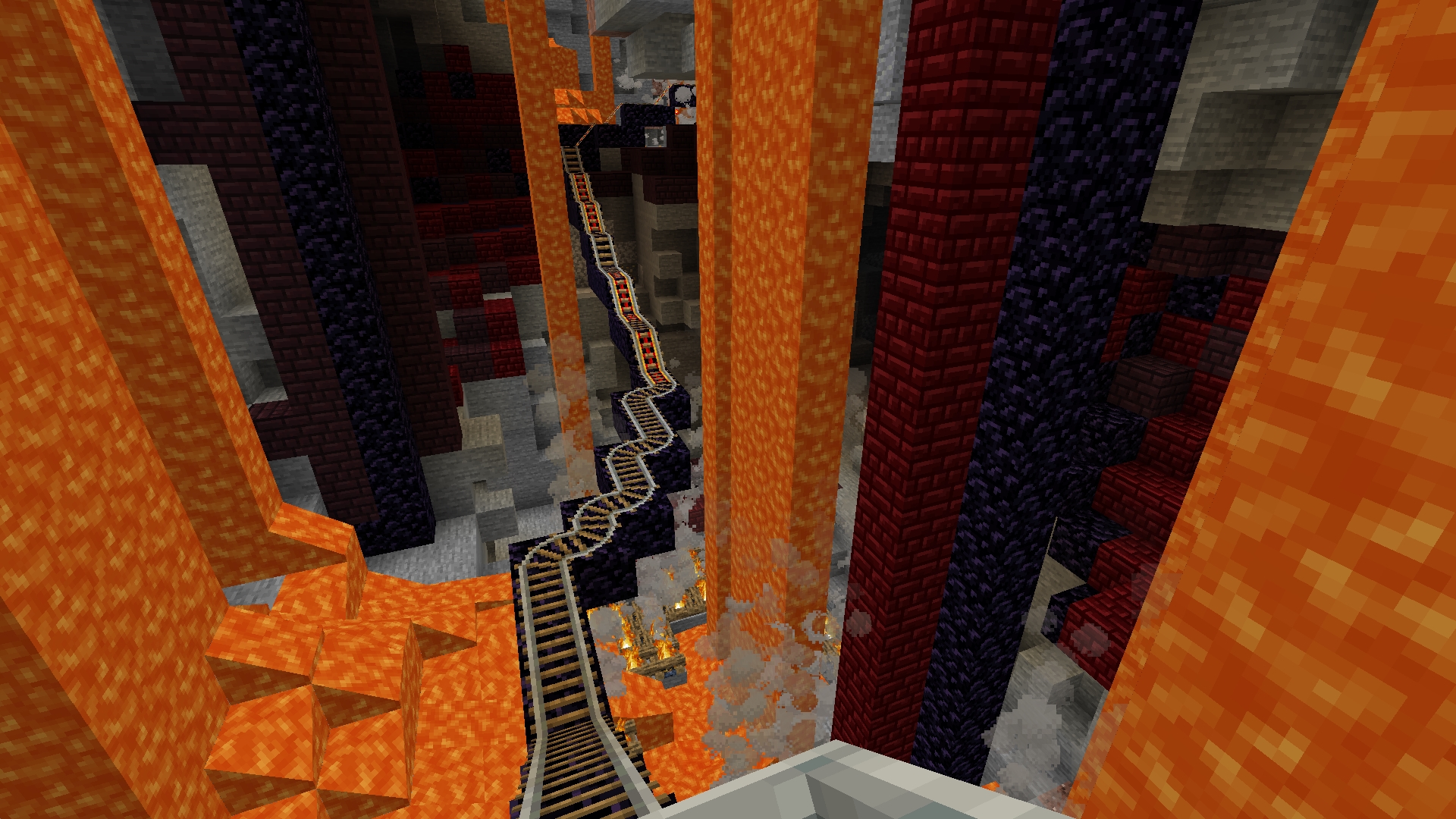 I just had time to think “wait, what is below us?”, when the track disappeared in front of me, and my cart fell a hundred blocks or more into a flaming, lava-flooded underworld. Oh, good: we had found hell. The rails rattled us around tight corners, steep ascents and sudden, stomach-dropping falls for a terribly long time, as infernal machines thundered above our heads. “Who had built this place?”, we asked each other in mounting bewilderment, “and will we ever get out of it?” 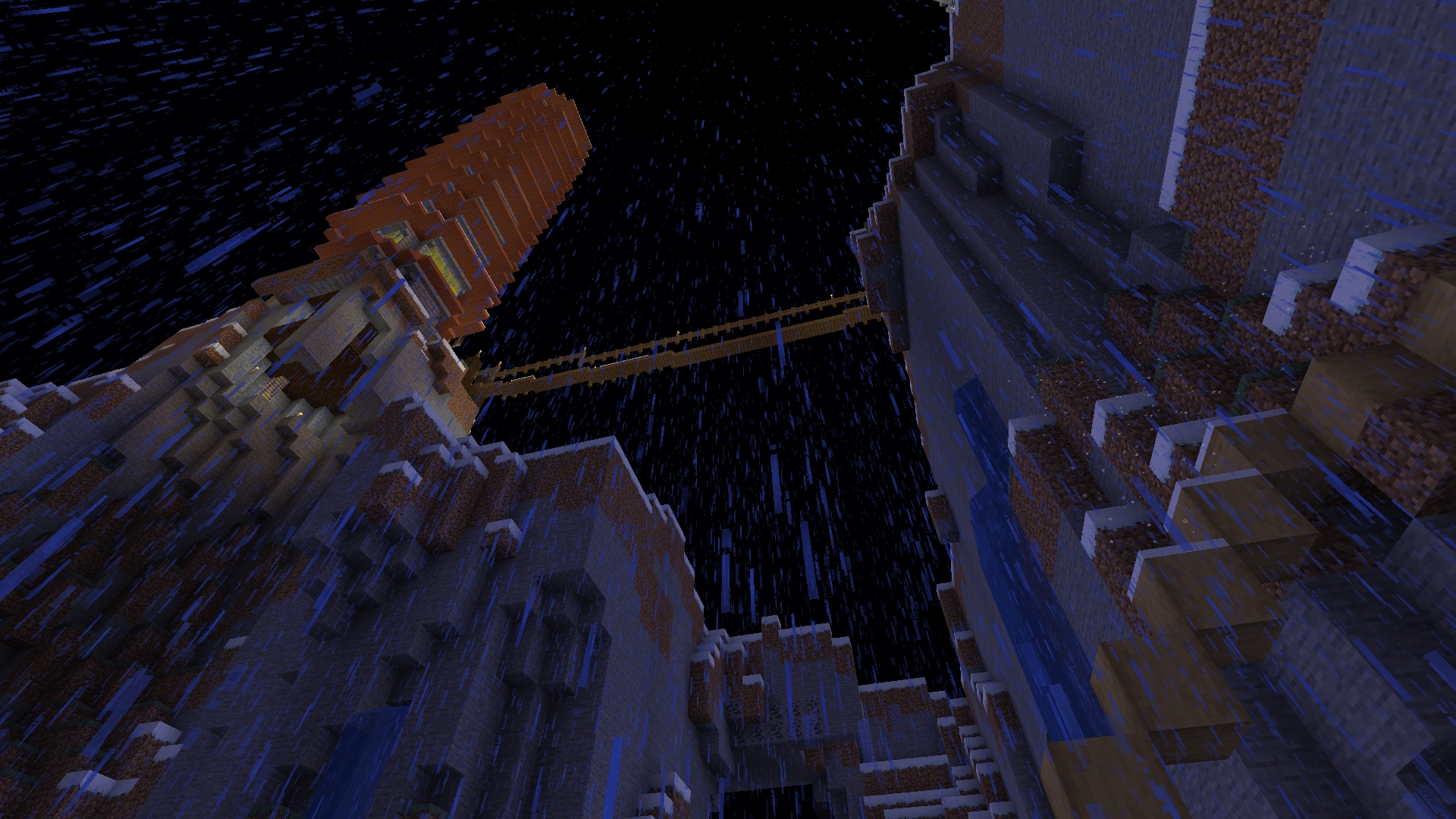 Eventually we did get out. And as I tried to get my bearings, I looked up and saw two, almost-symmetrical towers on the crags above. I knew these towers! They had been built by two self-proclaimed wizards in the earliest days of the server, and stood only a hundred blocks or so from spawn. Somehow, the devilish convolutions of the great western railway had taken us all the way back to the starting settlement. 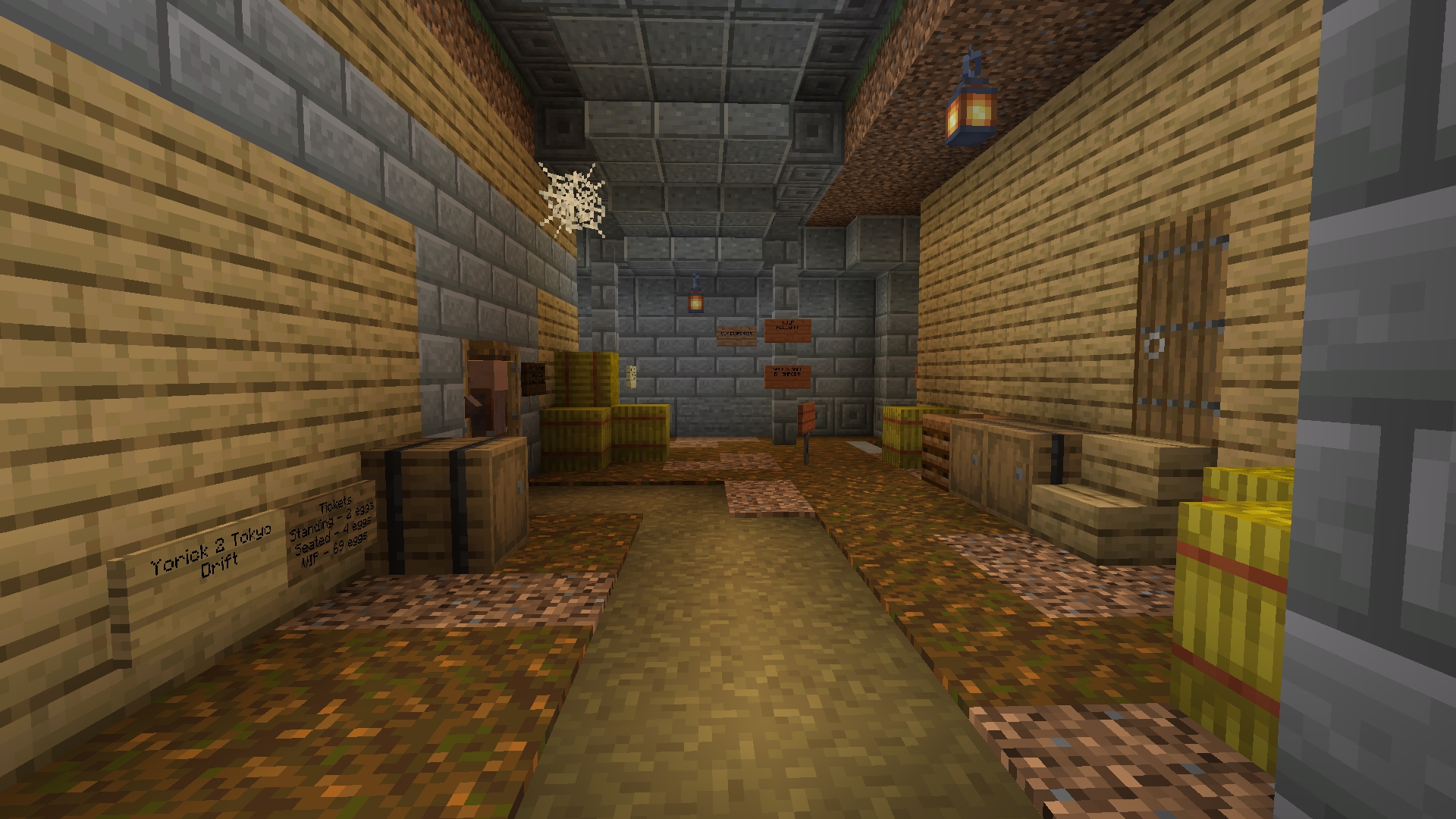 Shaking with relief, we made our way back to the weird underground Deadwood pub, where a bit of further exploration turned up this subterranean alleyway – presumably once open to the sky. Opposite the pub was a door to a small theatre, long-abandoned, but with posters up outside for its final performance of “Yorick 2: Tokyo Drift”. The seat prices were listed in eggs, with the dubious-sounding “VIP seats” going for 69 eggs apiece. A chest next to the sign was, indeed, packed to the brim with eggs. 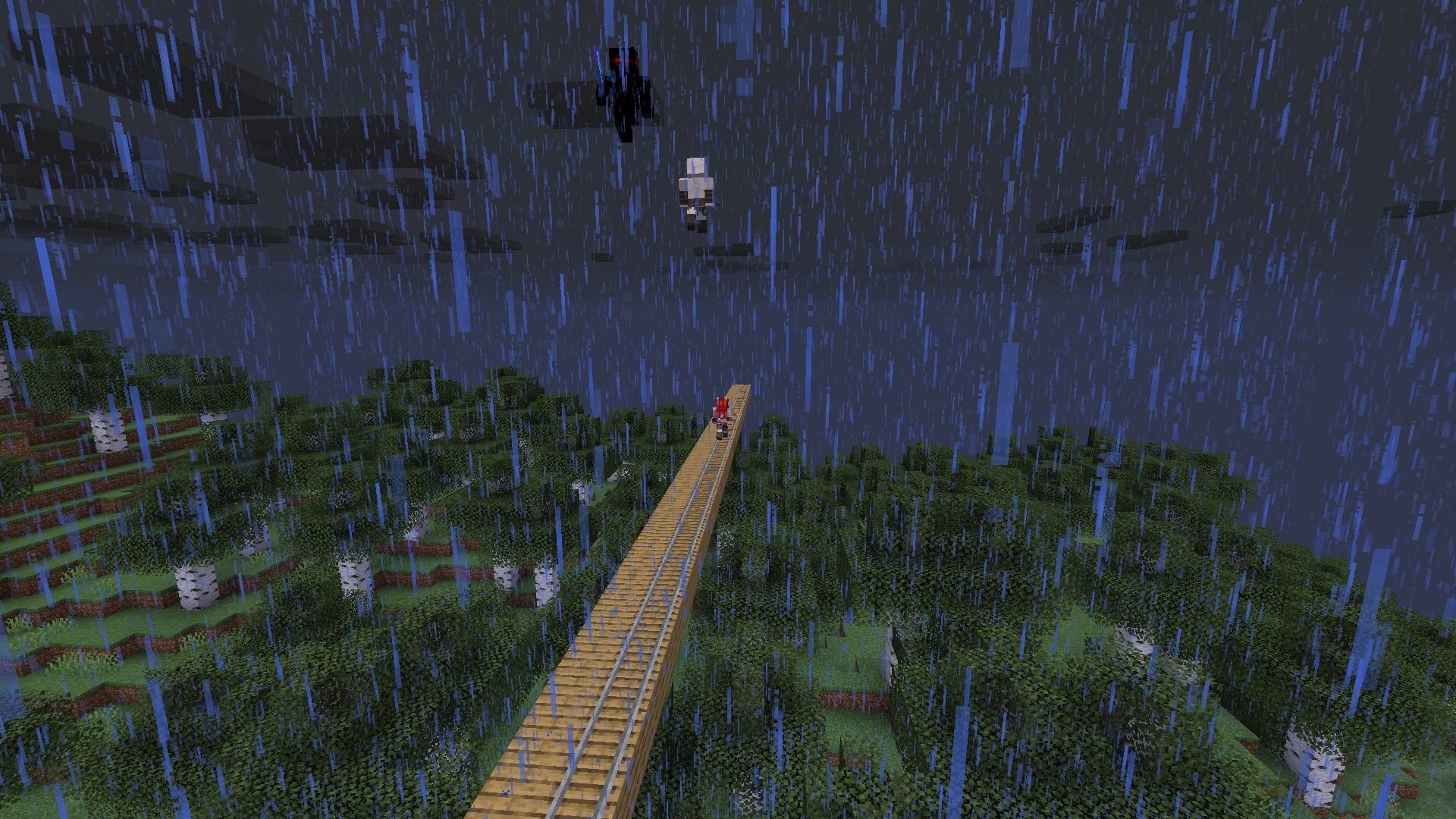 But there was one more railway to explore. An arrow straight track headed south out of town, which was said to be more than 7,000 blocks long and – unlike the mind-gnawing wonders of the west – was said to have been built by just two brave pioneers, before anyone on the server had been granted mod powers. We set off south. 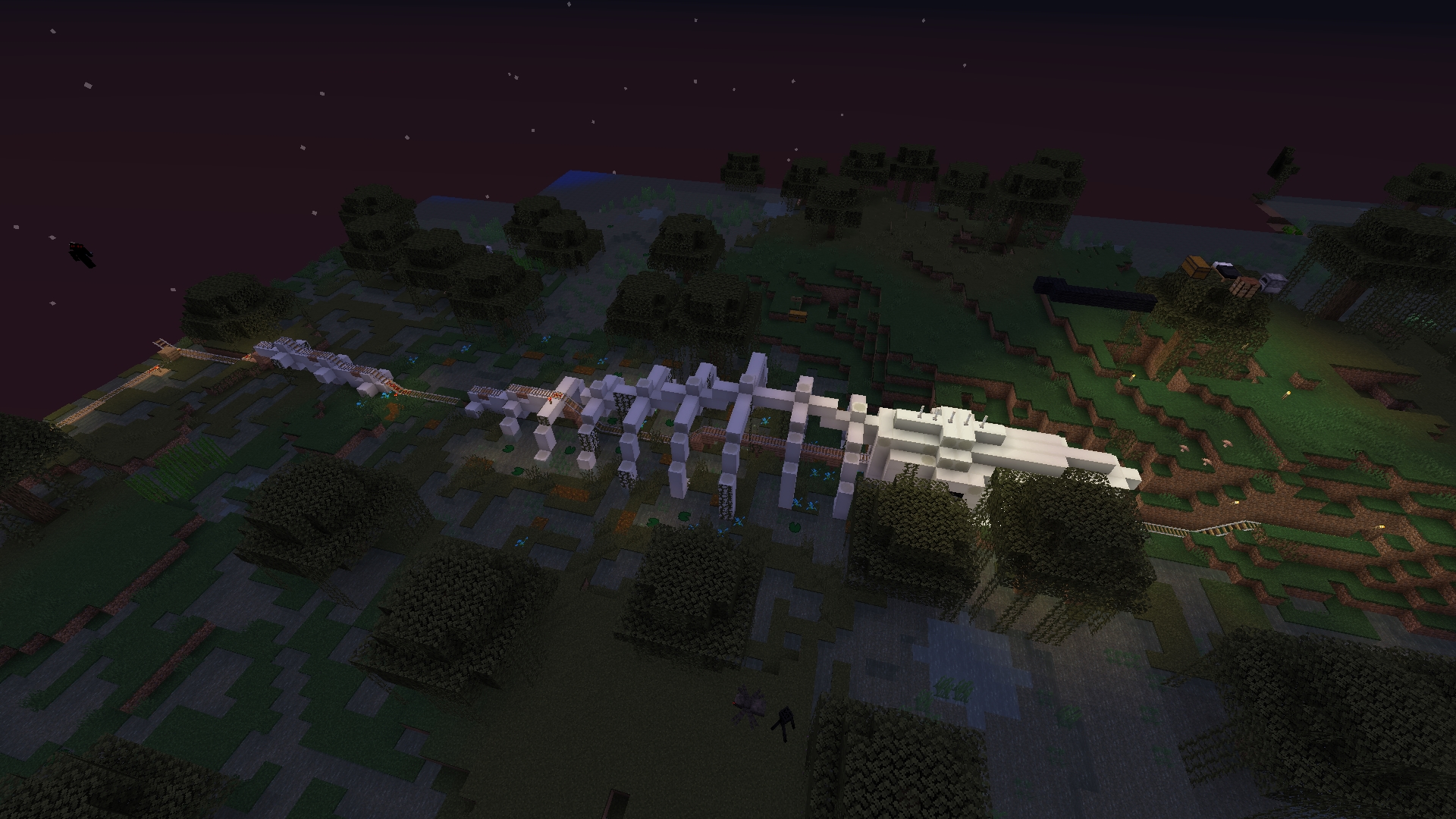 After a while, we passed the glowing bones of a leviathan in a swamp, and stopped briefly to explore a homely shack nearby. From what we could tell from the books therein, it had been the next home of one of the tower wizards, once those twin constructions had been finished. 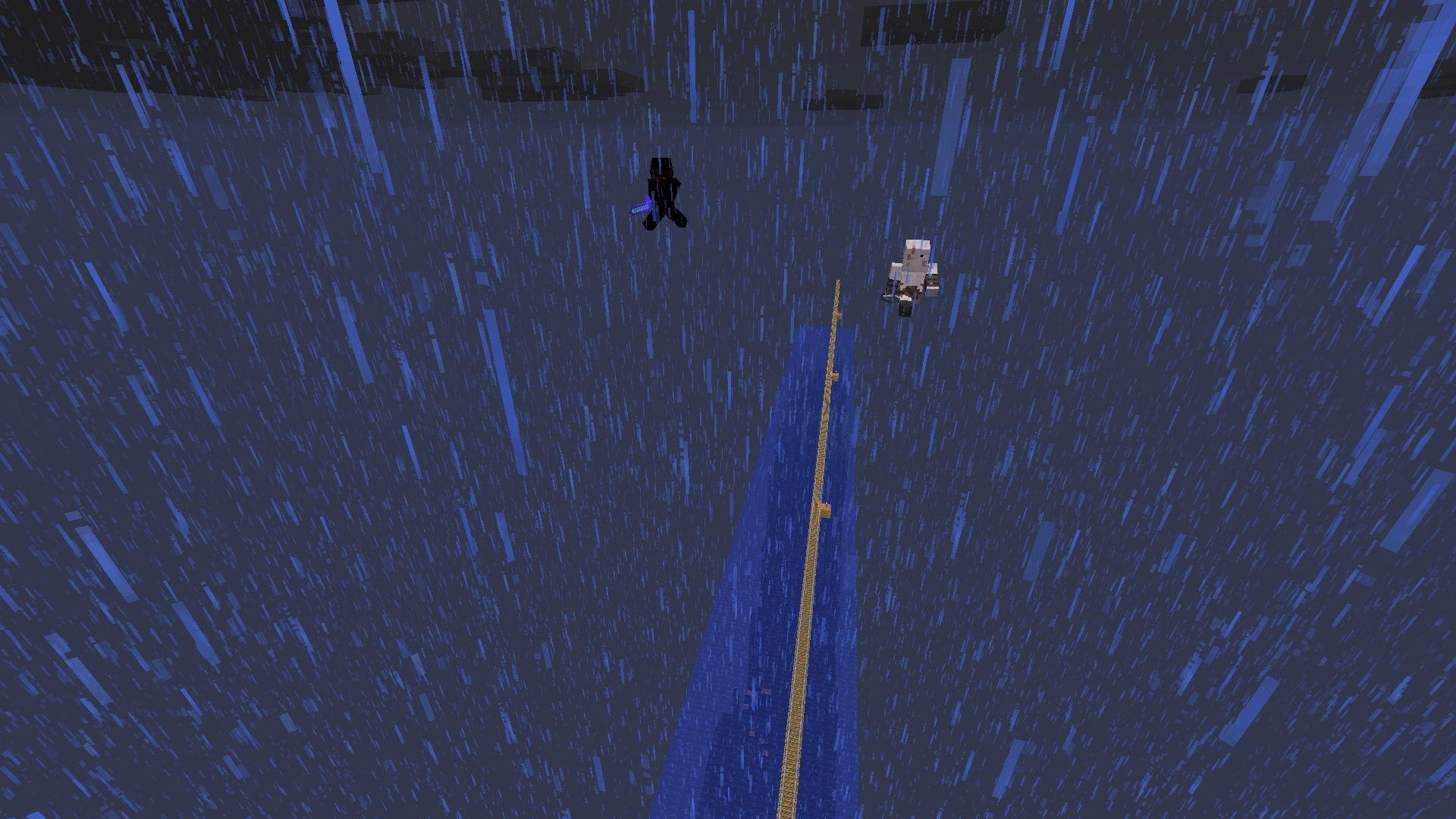 The rails were broken in places, so after a while we gave up our carts and took to the air to fly the rest of the way. We began to pass over a sprawling ocean, and a mile or so out from land, things got odd. Because of the constraints of Minecraft Realms’ server hosting, we ended up in a disconcerting situation where the world was loading slower than our zooming through it, leading reality to constrict to a single stripe of ocean and railway beneath us, with yawning emptiness to either side. It was all starting to feel a bit like the end of a China Miéville novel. 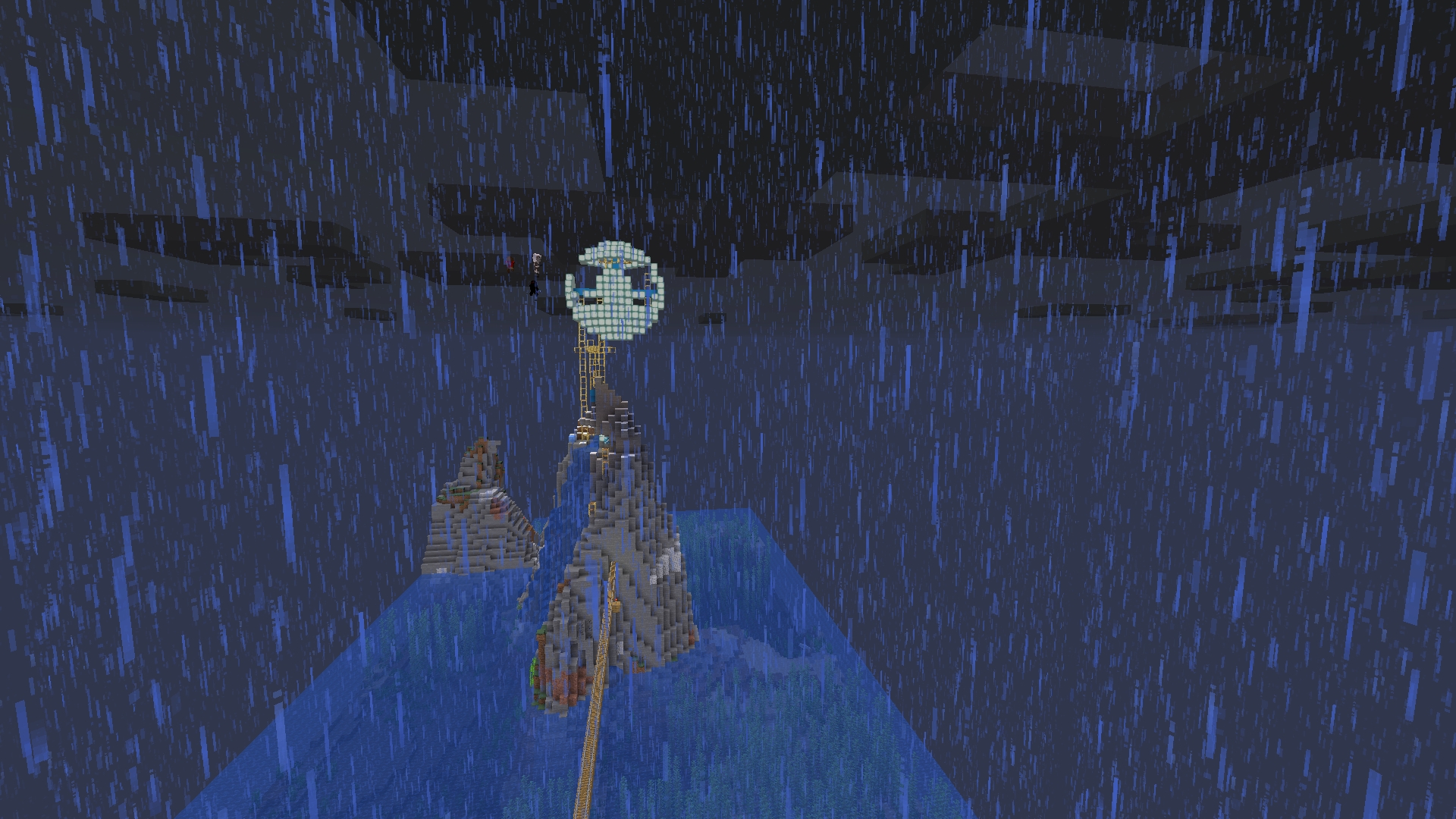 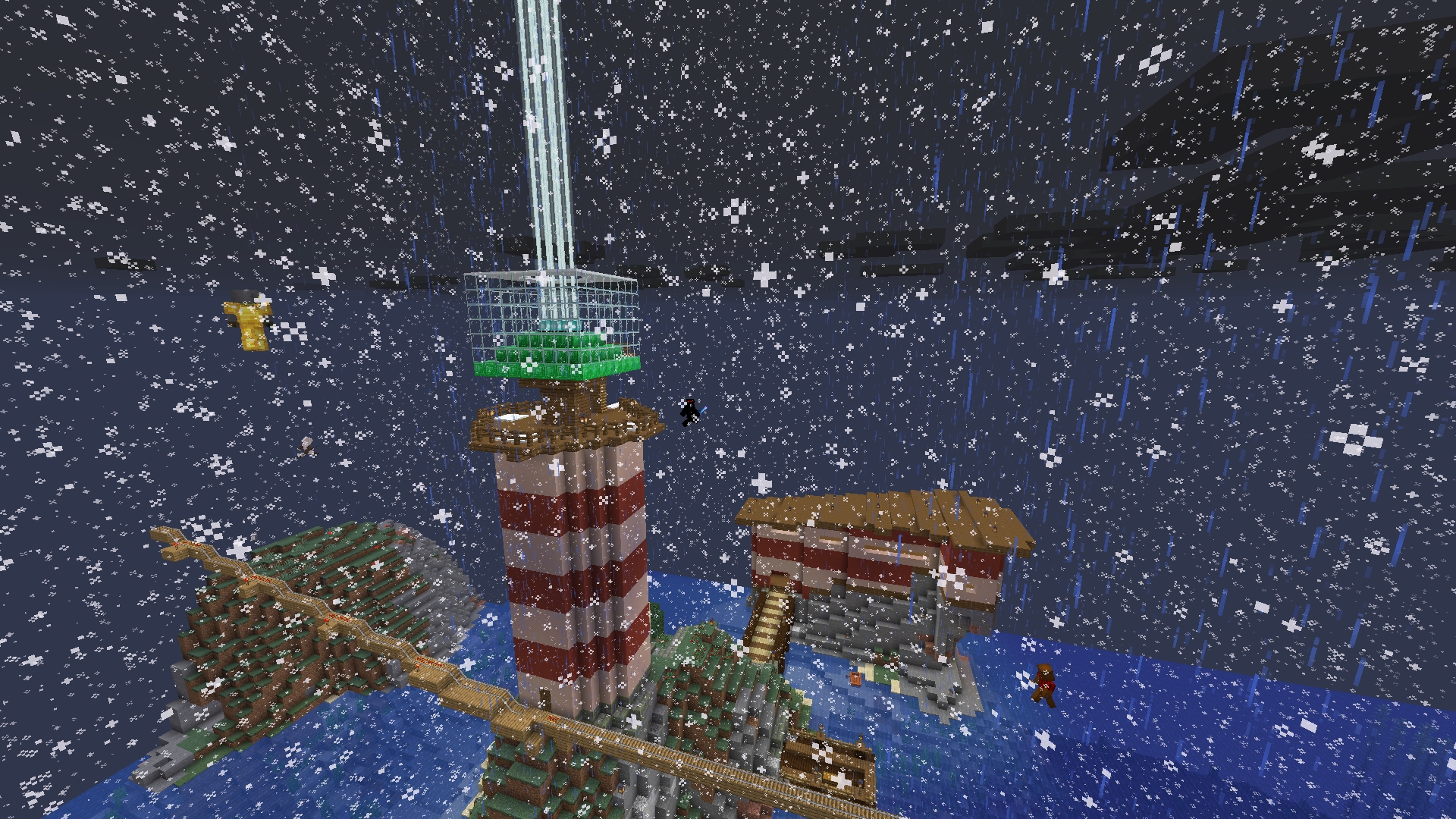 …and this lighthouse on an isolated rock, pulsing with a shaft of green, Shrek-coloured light. 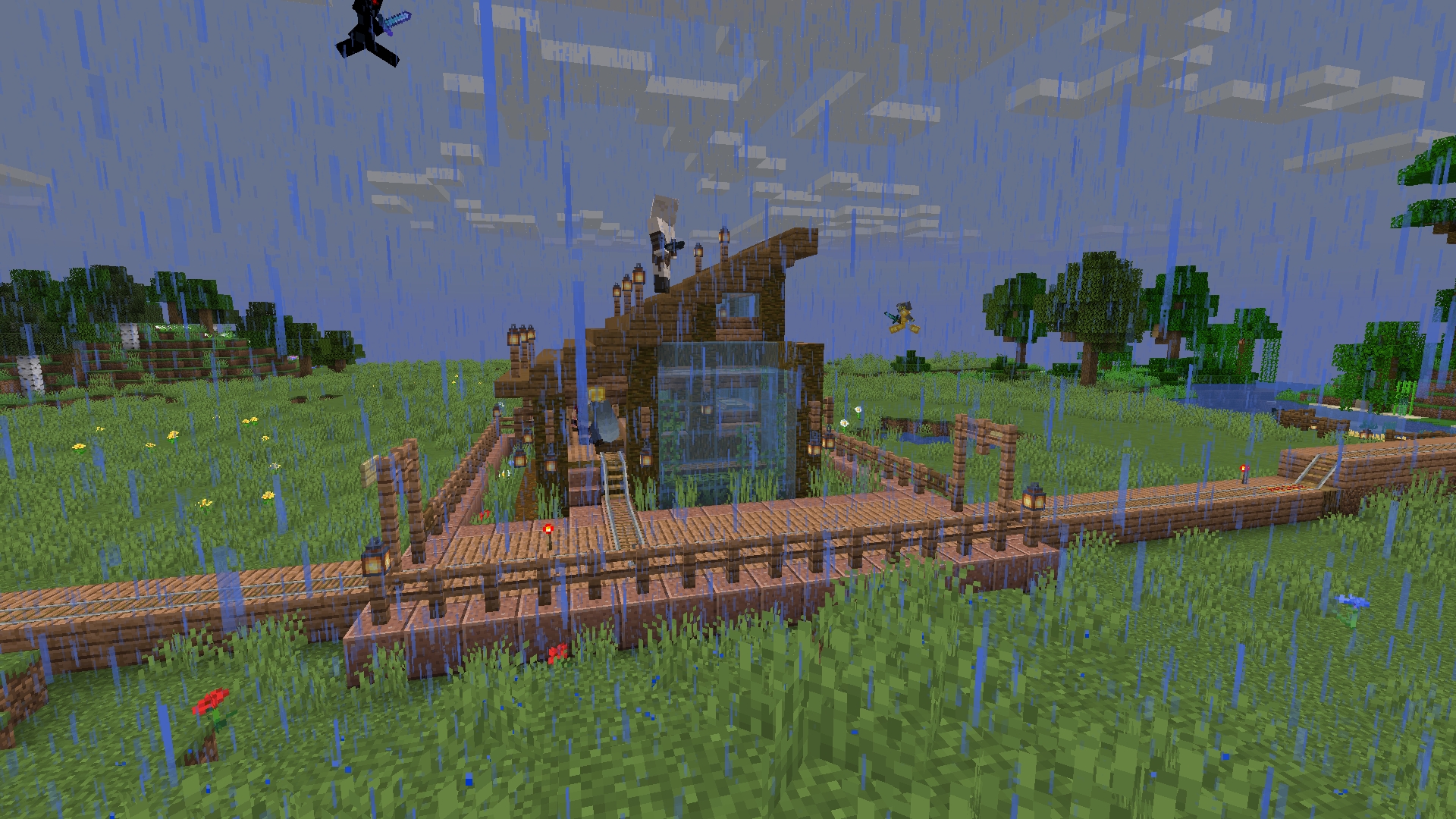 But eventually, the ocean came to an end, and we swooped in to land on its far shore. After a day’s trekking through rugged, untouched hill country beside the lonely rail, we came upon a lush river valley on the edge of a jungle. And there, beside the rails, stood a tiny, modernist house. There was a vine-clad hot tub inside, and so we settled ourselves into the bubbling water to toast what felt was the approaching conclusion of our odyssey. 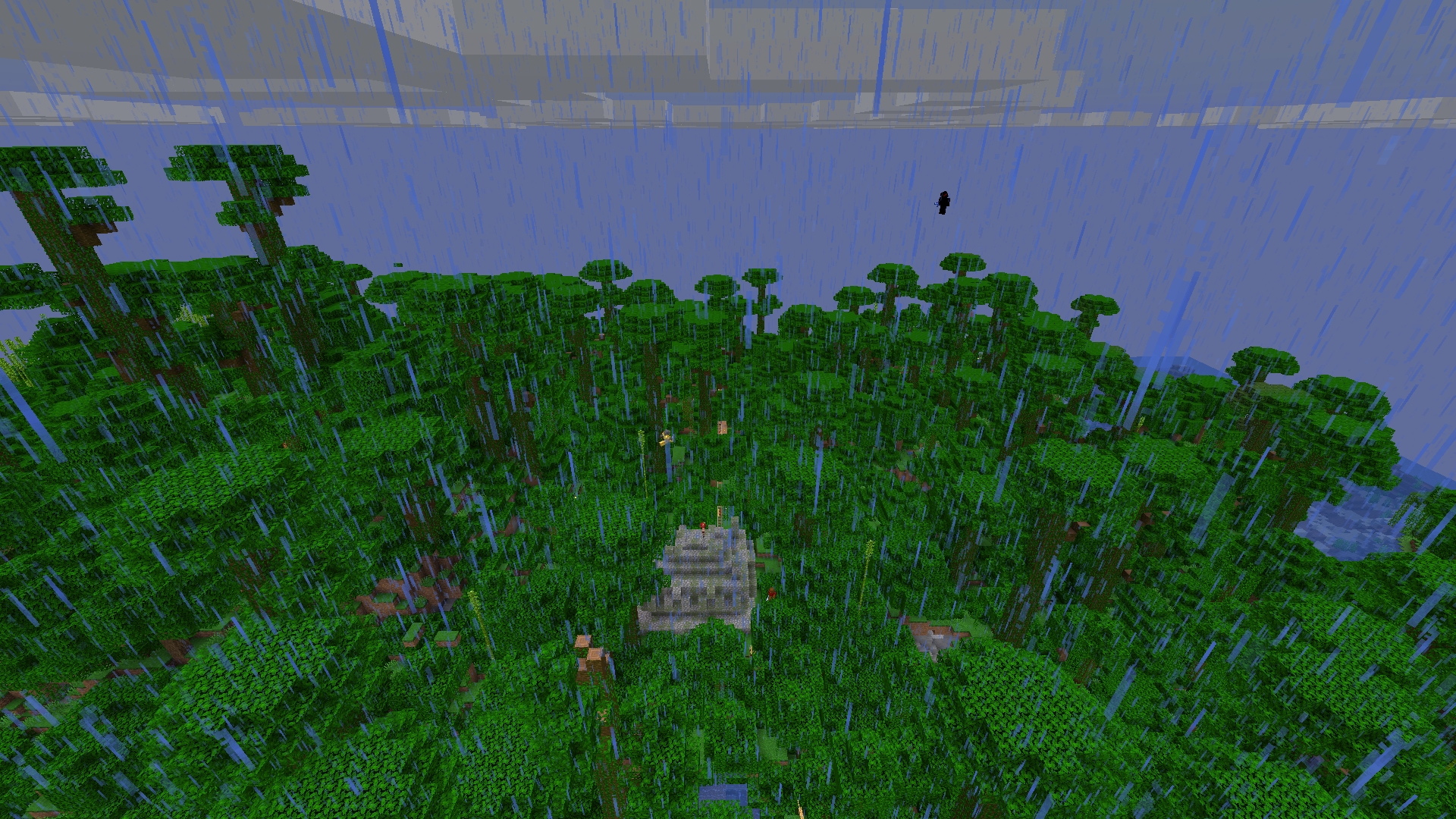 And there it was – the very end of the line at last. A moss-coated temple in the deep jungle, where the 7,000-block railway ended in nothing but a plain wooden buffer. There was no further left to travel. But what was inside? 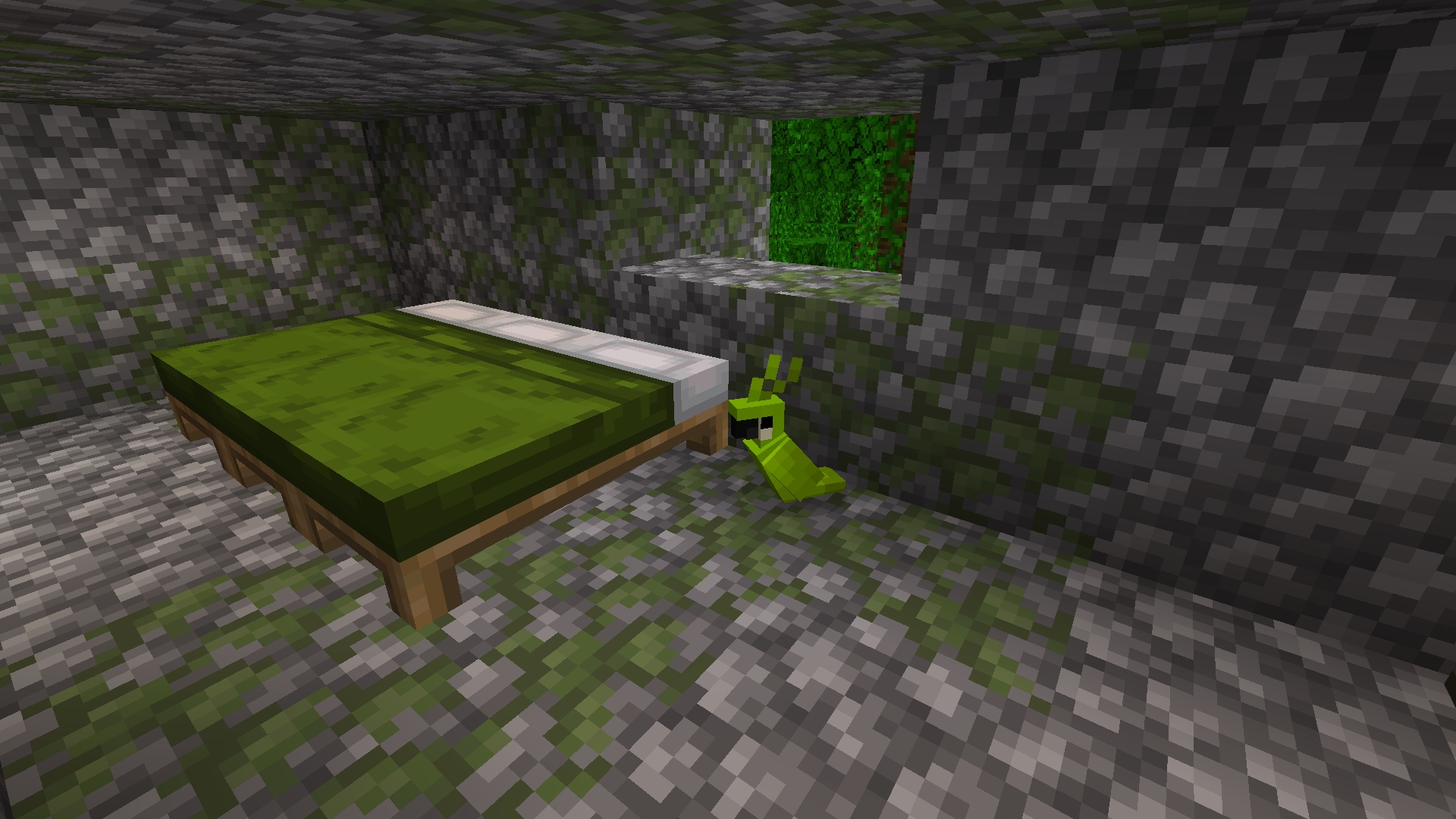 Just three green beds, and a single green parrot, forever echoing the hiss of a creeper. Now that’s what I call environmental storytelling.

The journey was over. But as we said our farewells and prepared to call our expedition to a close, a single image appeared in the Minecraft server’s discord. This was that image: 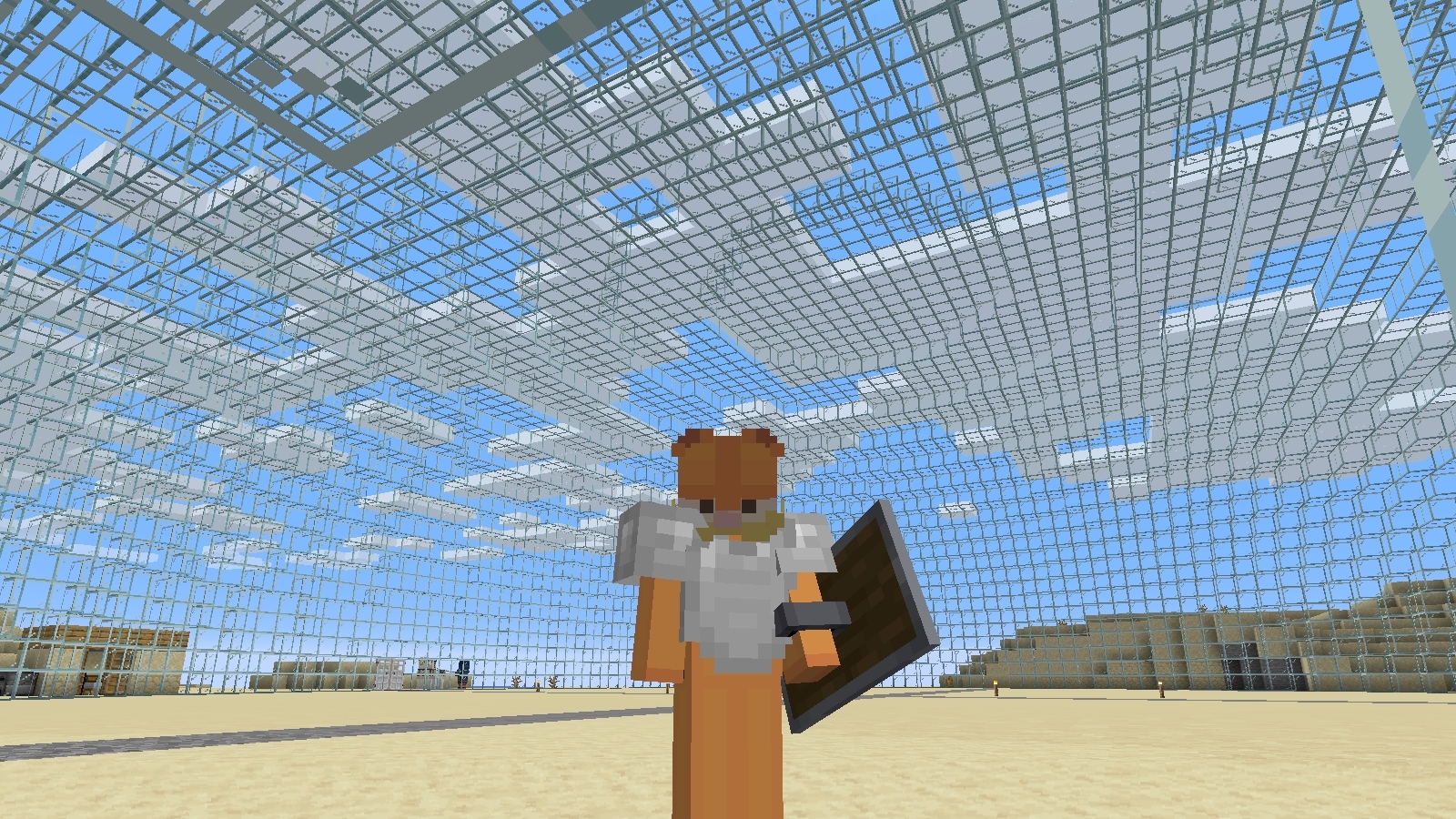 Garfield, standing with an expression of smug challenge, in a colossal, empty glass dome. I could only see this as a provocation, akin to Robotnik juggling uncollected chaos emeralds at the end of an imperfectly-completed game of Sonic. Perhaps this server has further secrets yet to be uncovered.